The party game staple Jackbox returns with its eighth release. Does it have what it takes to keep the legacy going strong?

Party games require two key elements to live up to the expectations of the genre. First, they have to be easily accessible as the minimum number of players to get the game functioning is higher than in most genres. Second, they have to be easy to pick up so that players can hop in and get right to the fun with the least amount of initial investment possible. Jackbox tends to succeed in this regard with most of the games in its collection even if they are a mixed bag at times. The eighth entry in the series carries on the trend with a handful of games that are likely to entertain and disappoint in equal measure. I was lucky enough to have several good friends along for the ride and I’ve decided to rank the contents of this pack from the least impressive to most impressive experiences on offer. 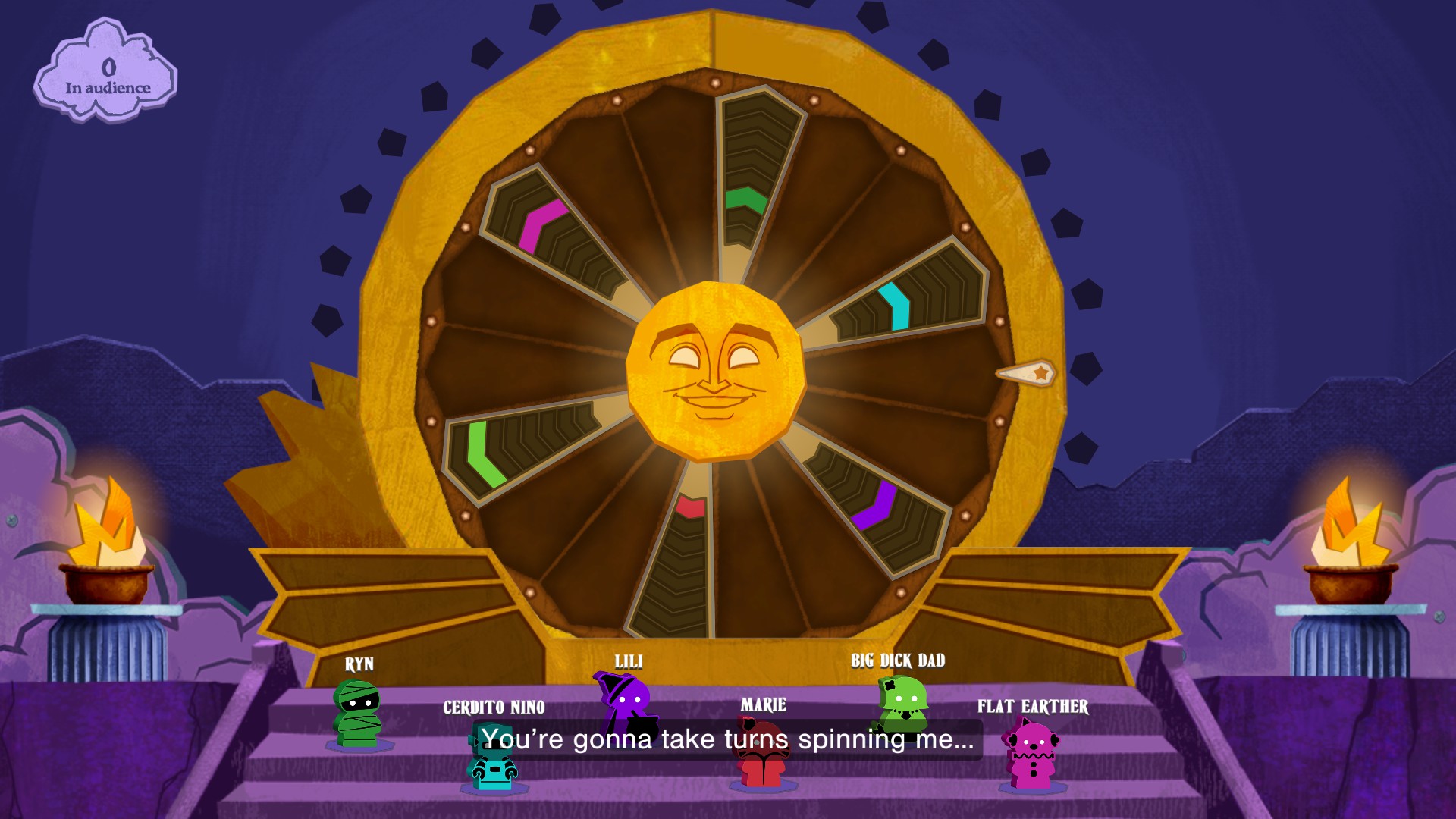 #5: The Wheel of Enormous Proportions

The Wheel of Enormous Proportions is most easily defined as a combination of trivia and Wheel of Fortune. A multiple-choice question is posed to the group with well over a dozen answers. Many of these choices are correct and the player who selects the most correct and least incorrect among them is awarded the most points. The highest-scoring player receives a slice to put onto the wheel that is visited after every trio of questions. When the trivia action moves to the wheel, each player places their collected slices onto it and a lucky player gives it a spin. Whoever’s space it lands on receives a hefty batch of points with a few surprise landings on it to spice things up as well.

Every game is going to be subjectively judged and opinions may vary, though this was the game that the group unanimously decided was the worst in the pack. Trivia is hit-or-miss for me in general and I tend to get bored of it quickly, though it was a perfect storm of issues that lost me on this one. A short time restricted the amount of time that choices could be made and left a couple of the players who were playing on their phones frustrated as those using a browser had a serious advantage. I can certainly get on board with timed trivia, but time trivia that requires you to scroll on a smartphone while simply being point and click in a browser was rough. The wheel itself, the real gimmick of Wheel of Enormous Proportions, didn’t add much to the excitement either and there was a collective groan at one point when a near-win resulted in an entire additional round thrown on. This one’s likely to be a hard pass for me in the future unless someone else gets an urge to play and asks me to join in. 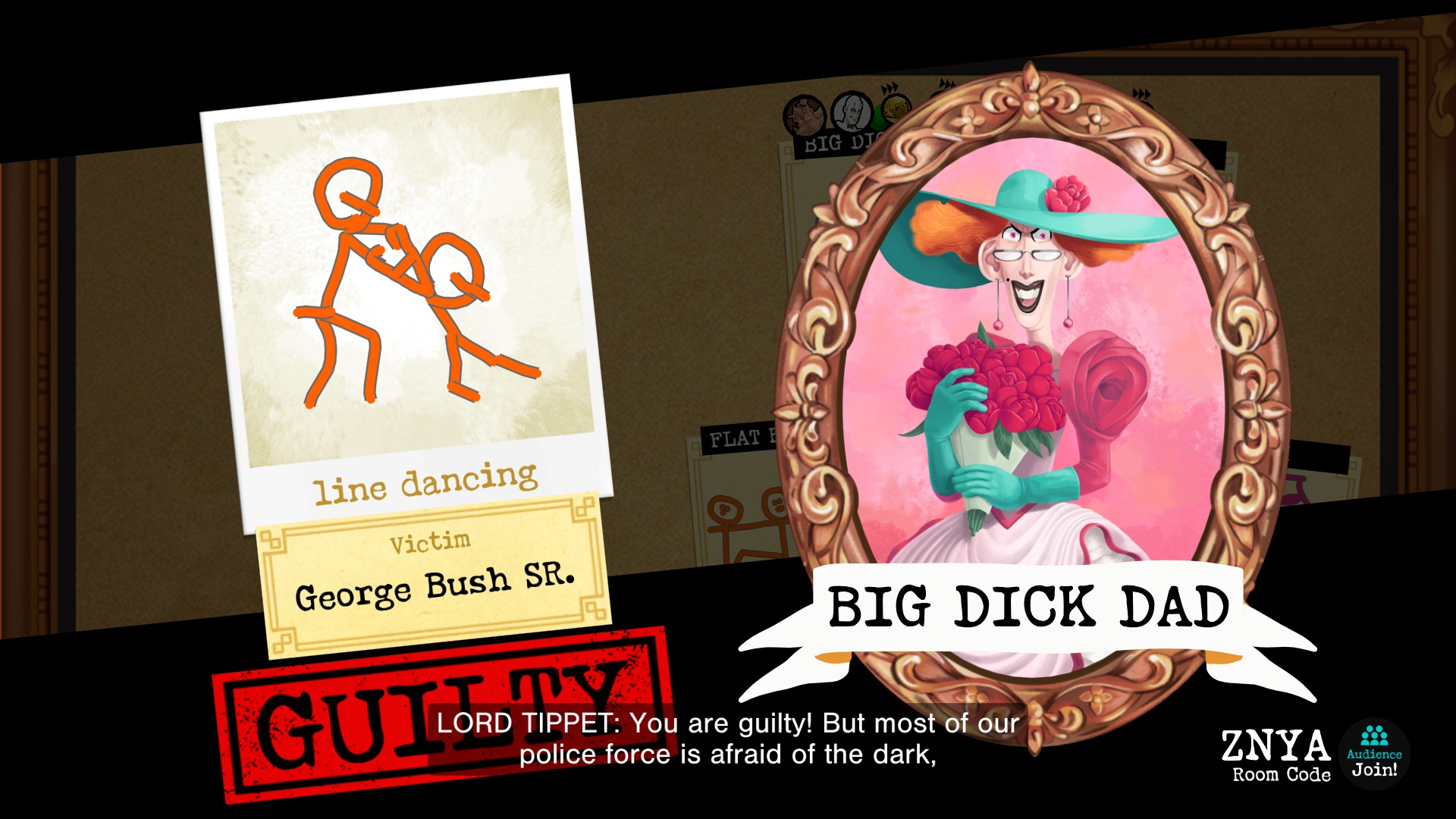 Weapons Drawn is a unique enough game, though where it bogs down is its complexity. Jackbox tends to pull in groups of players who are seeking out something quick, comedic, and casual to play with their friends but this one doesn’t fit as closely as the others as it has an initial learning curve that ends up slowing down the play session for an experience that, quite bluntly put, isn’t worth it even once everyone has it down. Each player is both a murderer and a detective who is tasked with drawing a murder weapon from a prompt. The catch is that a letter from your name is used as your calling card, something that links a murder to you, and you have to hide it as well as you can inside of your drawing. Depending on the letter this can be a particularly arduous task or extremely easy (I’m looking at you ‘I’). Players will then name their own guest they’re bringing to the party and the group will have to figure out who killed each others’ guests by judging the pictures that show up.

Although I wouldn’t say that Weapons Drawn was a bad experience, it wasn’t a thrilling one. It was less casual than the others in the pack and even after the investment required to learn it was behind us, we felt that we were mostly done with it before we’d even reached the end of our first run. If a murder mystery party game is what you’re looking for, I would highly suggest looking elsewhere at plenty of other places that do it better. 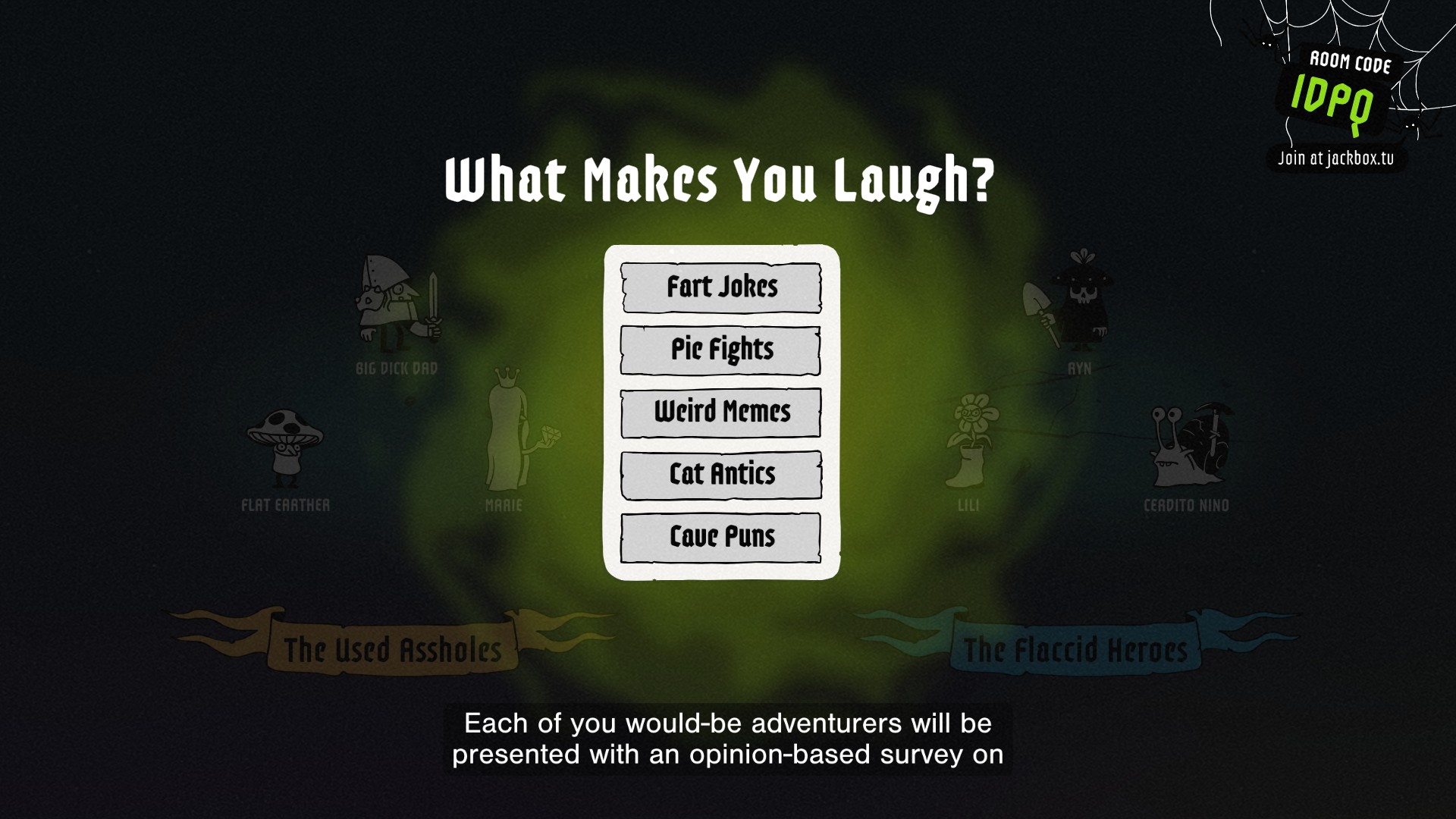 Although my opinions have been a bit harsh, The Poll Mine comes in at number three and acts as the turning point. Each player is assigned to one of two teams that were named by the players themselves and takes off on an adventure where each location tasks them with answering a question in the form of a ranked poll. Teams then guess where the different answers ended up in the ranking in order to acquire the most torches with correct answers.

This one was a hit with most of the group and I could definitely see jumping back into it in the future. It’s a good time guessing how your friends voted in the ranking and the variety of questions keeps it fresh. There’s a strong interpersonal element that wasn’t in the previous two entries that made this one stand out as a fun experience that has you continually guessing how the rest of the players lined up their choices in a particularly subjective poll. 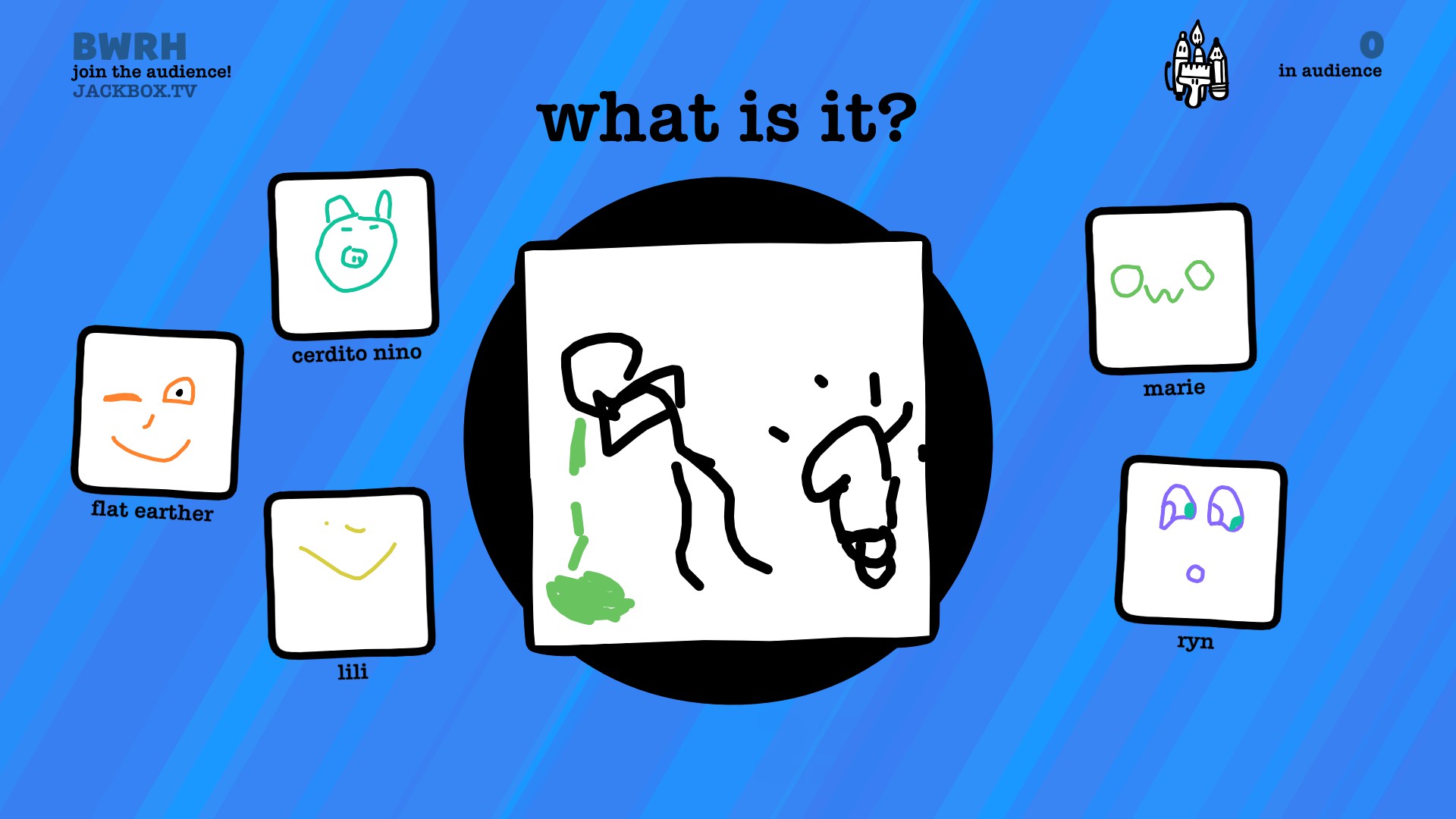 The silver trophy goes to Drawful Animate. In this one, players receive a secret text prompt and have to draw it before the game begins. However, these pieces of art have a unique twist to them in that you’re drawing two frames that become an animation to be viewed by the group. These are revealed one at a time and the non-artist players submit their own fake prompts in an attempt to trick the others into voting for theirs instead of the right one. Points are awarded both for guessing the correct prompt and for having others vote for the false one that was added to the mix.

This was the game that felt the most like what I expected from Jackbox. It was fun and full of hilarious results hand-crafted by the personalities within the group. There was plenty of room for individuality and it was used to its full potential. I’m already getting the urge to play this one again and I would say that most of the conversations that have taken place since we ran through this pack have revolved around Drawful Animate. 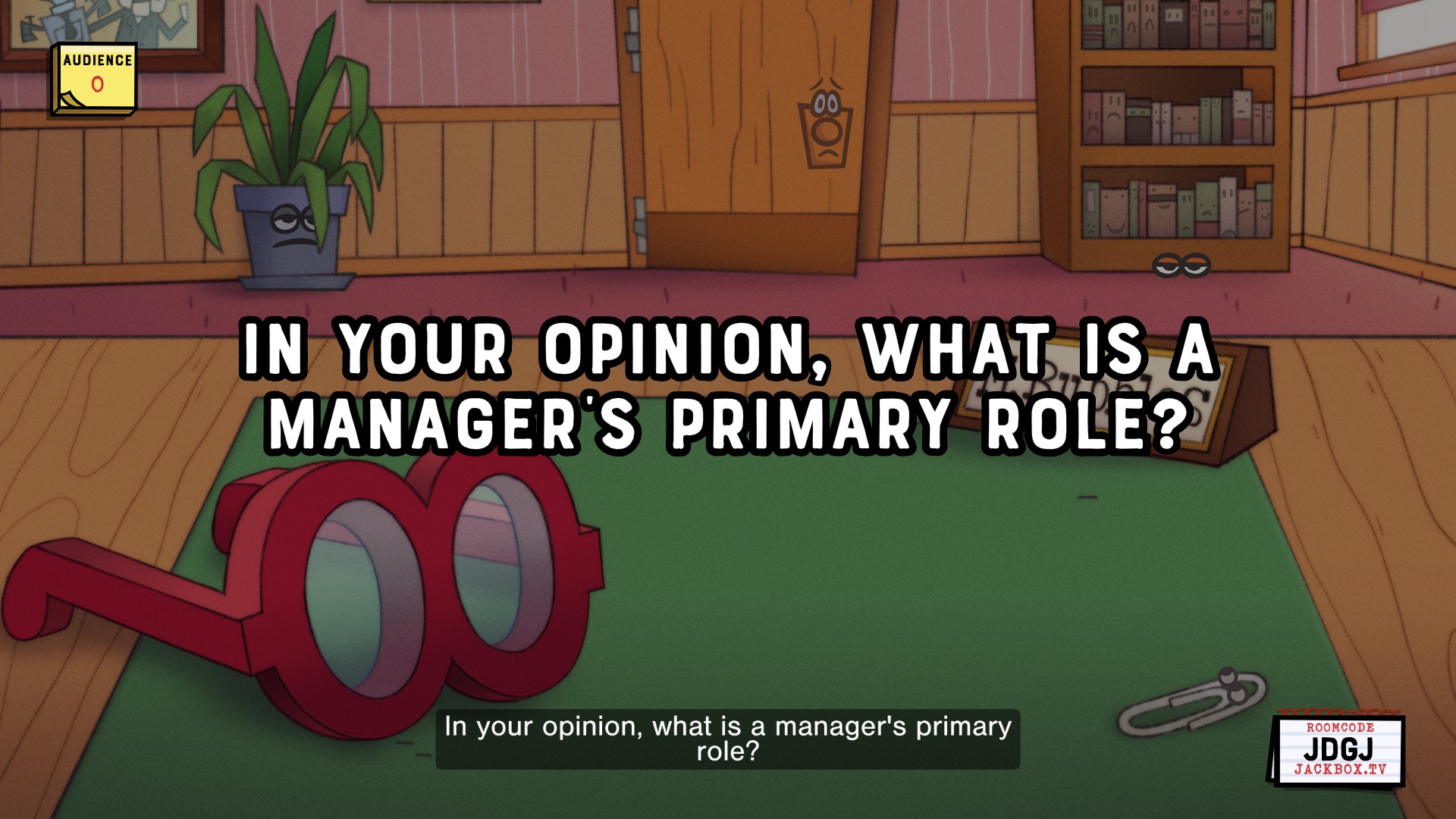 The standout game this time around is the job interview “simulation” Job Job. Players compete as candidates for a position by answering a variety of icebreaker questions in their own words. Once these answers are submitted, they’re chopped up into their individual words and thrown together into one large batch. They are then distributed amongst the players so that they may answer new questions using only these words. They can be placed in any order, though players no longer have the ability to type in their own at this point. Points are awarded both by having your own words picked to create the new answers or by having your Frankstein-monster of a sentence voted as a better fit than the other player’s that it’s lined up against.

Job Job was a pleasant surprise as it checked all of the boxes for what I wanted out of a Jackbox game while also being something new. Everyone got a kick out of the sentence restructuring and guessing which players certain words in the jumble had come from. It was a tough call between Drawful Animate and Job Job for the top spot, but Job Job pulled off the win due to its uniqueness.

The Jackbox Party Pack 8 lives up to its legacy with a few strong entries that are great additions to the collection overall. It’s likely to offer hours of fun for just about any group of players who are looking for a hilarious, personalized party game experience. That said, I would recommend waiting for a sale as it’s not the cheapest party game out there and there’s at least one entry that gets old before you’ve even finished your first game of it.