Despite the slow pacing at the start, Hermitage: Strange Case Files does a good job with its storytelling, letting you know what is happening in great detail, whether through words or animations.

Hermitage: Strange Case Files is a visual novel about mysterious beings. It tries to mix Lovecraftian lores and investigation elements with a heavy emphasis on the story. There are 6 chapters in total, each focusing on a certain case.

The unique art style charms me at first look. Character portraits remind me of Chinese calligraphy with heavy strokes on the clothing and hair, although facial features have a more realistic look. However, the cutscenes seem to be drawn differently in each chapter. While the first chapter looks good with its high-quality, anime-style drawings, it looks out of touch with the rest of the game, making other cutscenes look less appealing in comparison.

The backgrounds have a unique style. The first few chapters have 3D backgrounds that are redrawn to look like 2D backgrounds, although the rest of the chapters are more obvious on the 3D models. The 3D backgrounds in the later chapter might look like a downgrade to the other chapters, but they still try to be unique with their animations. As a game that relies on the descriptions from its narrative, having animations to describe what is happening helps to visualize the scene better. It usually looks as simple as swapping characters’ positions, although it also can be chaotic with the effects and camera zooming at the tense moments.

As a game that focuses on its narrative, it can be taxing to read the dialogues due to the number of details. The game will describe everything as detailed as possible, to the point that it feels like the story is proceeding very slowly. The slow narrative helps whenever there is a lot that is going on though. It’s easy to visualize what was happening because of it.

Despite the decent translation, some dialogues can prove to be confusing. I had to reread some dialogues several times since the game tends to be vague with its references. Some dialogues also feel disconnected from the other, making it hard to figure out what the game is talking about. One thing that bugs me the most is the main character, who is called the store manager, to be called as such when the game sets in a past, way before the said person becomes a store manager. I believe these are just translation issues, especially since the Chinese language can be wordy, but I wish it can be addressed better. 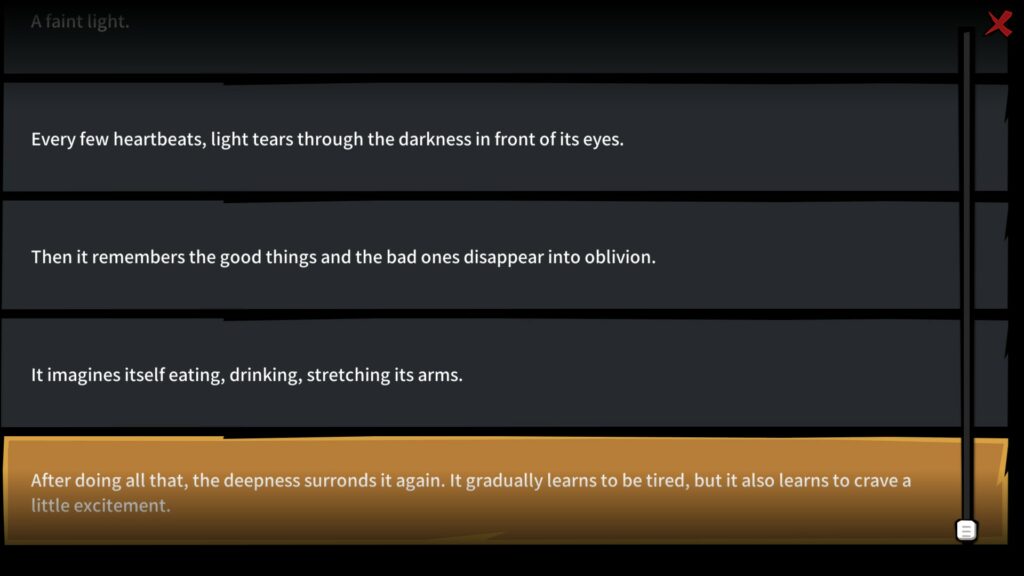 The story can be hard to understand at first. It looks as if you are playing the second installment of a game without playing the first one. Some facts will be blurted out of nowhere with other characters acting as if it was normal. Everything will be revealed in time, although some mysteries are still unexplained. I wished that the game separates the story into two parts instead. Don’t get me wrong though, the story is still concluded nicely at the end, but the ending somehow feels lacking in some parts, especially regarding the last antagonist that feels a bit weak in the conclusion.

Minor things aside, the writing is great. The characters’ dialogues might look similar at first glance, but everyone has a different way of talking, whether it’s from their snarky remarks or way of thinking. The idle banter between the characters also helps to bring the dialogues to life, and whenever there isn’t any, the narrative helps to portray whatever the game wants you to think. It’s easy to get immersed in the story because of it.

There isn’t much that you can do gameplay-wise. You’ll have free time at some points of the game, letting you gain additional insight that might or might not help with the current case. You can read books, browse a forum on the internet, watch TV, or even revisit the clues that you have found. Doing these might give you additional clues to solve the case, which can be needed to get a good ending.

There are 6 chapters in total, with 4 of them having one good ending and numerous bad endings. The bad endings are usually similar, although the way to trigger it is always the same: you need to fail in everything that you do. The game usually autosaves before the story branches though, so you can always load your save whenever you do things the wrong way. 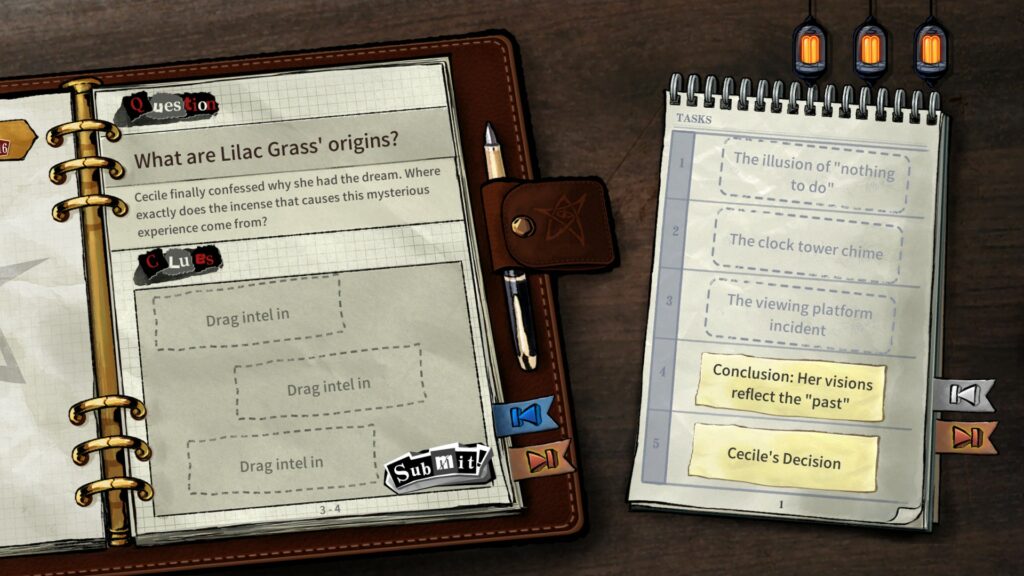 You might not be a detective in the game, but you still need to make a deduction later on. The game will ask you to deduce what is happening from a topic that was presented, and you need to gather the corresponding clues to form a conclusion. However, the topic tends to be too confusing to be understood. There were times when I understood what the game was talking about, but I just couldn’t find the clues that the game want me to put in the boxes. The deduction part becomes a game where I put everything that the game wants me to put instead of letting me solve the mystery myself.

The game lasts 30.4h for me. It took me an additional time of 1.2h to reach all bad ending achievements. Part of the long playtime might also be caused by my slow reading time though. I tend to reread some dialogues because I didn’t understand what the dialogues were talking about. As for the replay value, there is none unless if you want to see the bad endings. There is no point in seeing more than one bad endings in the same chapter though since they tend to be similar. 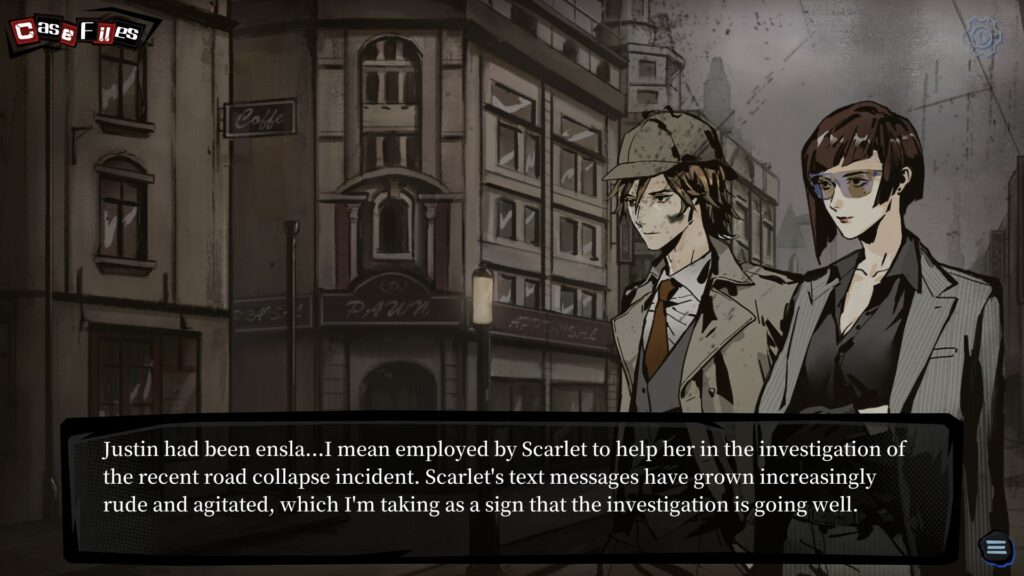 Hermitage: Strange Case Files might look like a proper investigation game, but the strength lies in its narrative instead. Solving mysteries can feel weird due to the non-realistic, mythical cases, and the deduction part doesn’t feel like you are solving the case yourself. However, the game always explains everything that happened in great detail afterward, saving your time from deducing everything. It feels like the game was meant to be read without the deduction part instead.

The well-executed narrative and the corresponding dialogues that follow make the story flow smoothly, leaving other features to be unnecessary. There might be some mysteries that are still unexplained in the story, but the conclusion itself is good enough for me. As a game that is heavily focused on the narrative, the game does its job well. People who like to read mythical stories with a spice of investigation will like the game, although I doubt those who are looking for an investigation game will appreciate it. Logical thinking that is usually used in such games doesn’t apply to this one, after all.