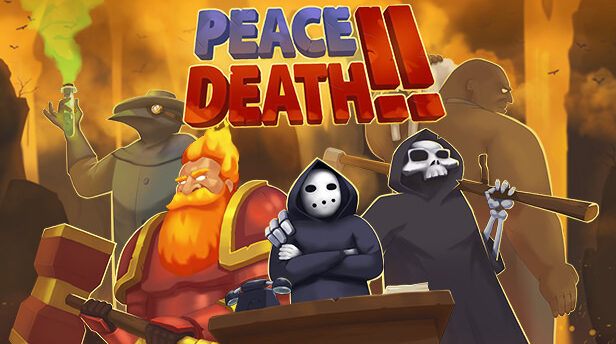 The quirky world of afterlife, the four horsemen, and reapers returns!

A second part to a fun logic game. If you’re not familiar with the first game, it was a fun little game where we had to send clients to heaven, hell, or purgatory based on their features and traits. The first game was more time-based and required us to complete all clients within a certain amount of time. The second game still takes us to the same universe and still requires us to sort clients into heaven, hell, and purgatory, but this time round the core gameplay is quite different.

The game is quite light on the story aspect, although it does expand on the setting introduced by the first game. We’re one of the reapers – workers whose job is to sort clients into the correct place after death. The reapers in turn take orders from their higher ups, who are the four horsemen of the apocalypse, as well as another member of the horsemen gang – Fate (who was introduced in the DLC to the first game). The horsemen are represented as influential figures in this world.

In general the setting is very light-hearted and is full of references to pop culture and real people. The clients we come across during our work days are often modelled after characters from films, games, and other fiction works, as well as some real people, such as politicians and internet celebrities. The references are not really force-fed onto us and are merely just there for those who recognize them. They don’t really affect the gameplay.

You’re unlikely to be playing ‘Peace, Death! 2’ for the story or characters. You’re likely here for its gameplay, which is the central aspect of this game.

Just as in the first game, our job as a reaper is to sort clients into one of the three locations. However, this time round it is not timed and we’re not given one client at a time. Now we are given several clients at a time, and from those we have to choose who goes to the given location. The early missions start off simply – we have angels going to heaven, demons to hell, regular humans to purgatory. 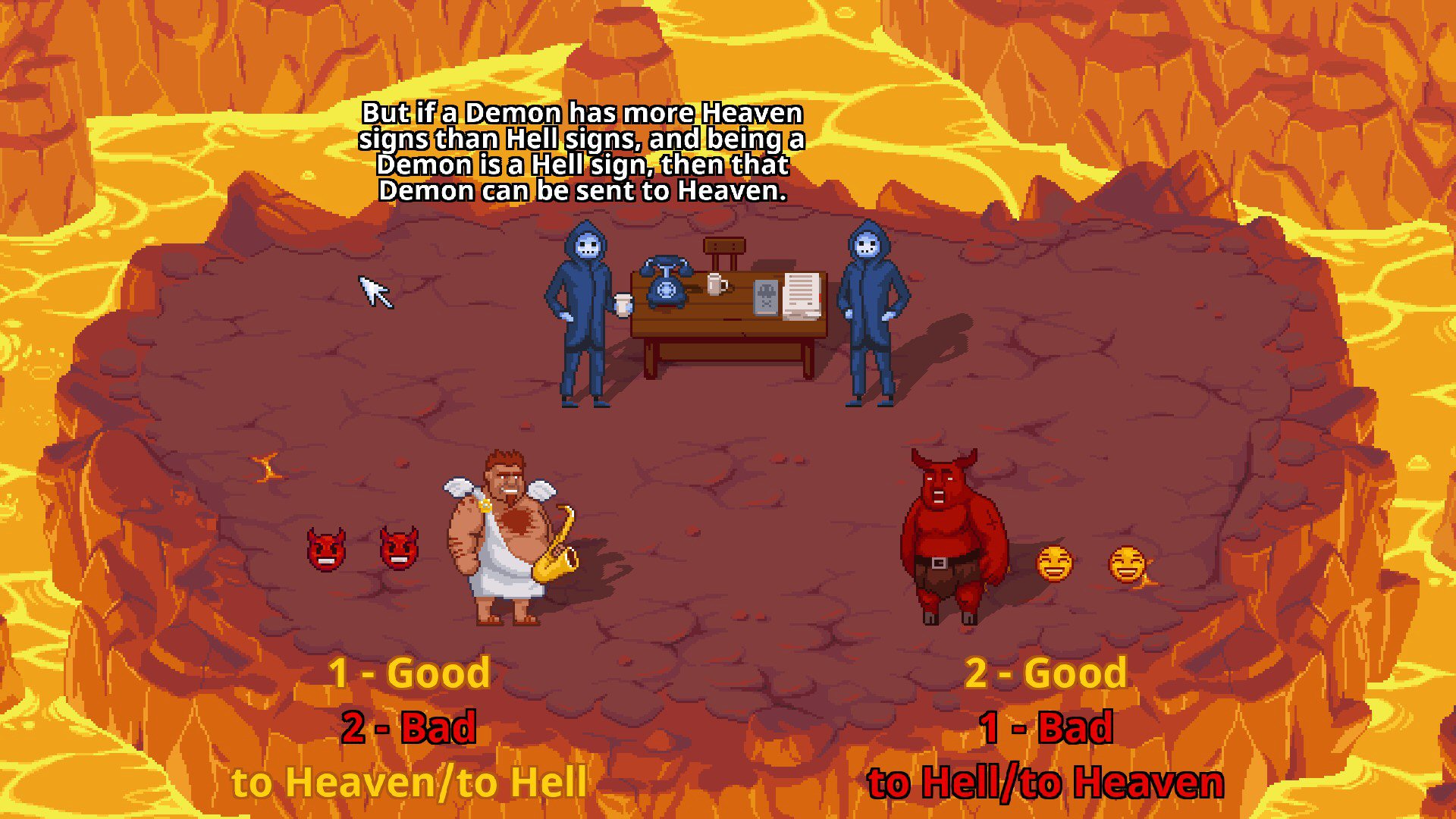 But then with each new mission traits get introduced. Traits can be positive, negative, or neutral. If a client has more positive than negative traits, they go to heaven, if more negative, then hell, and if equal, then purgatory. 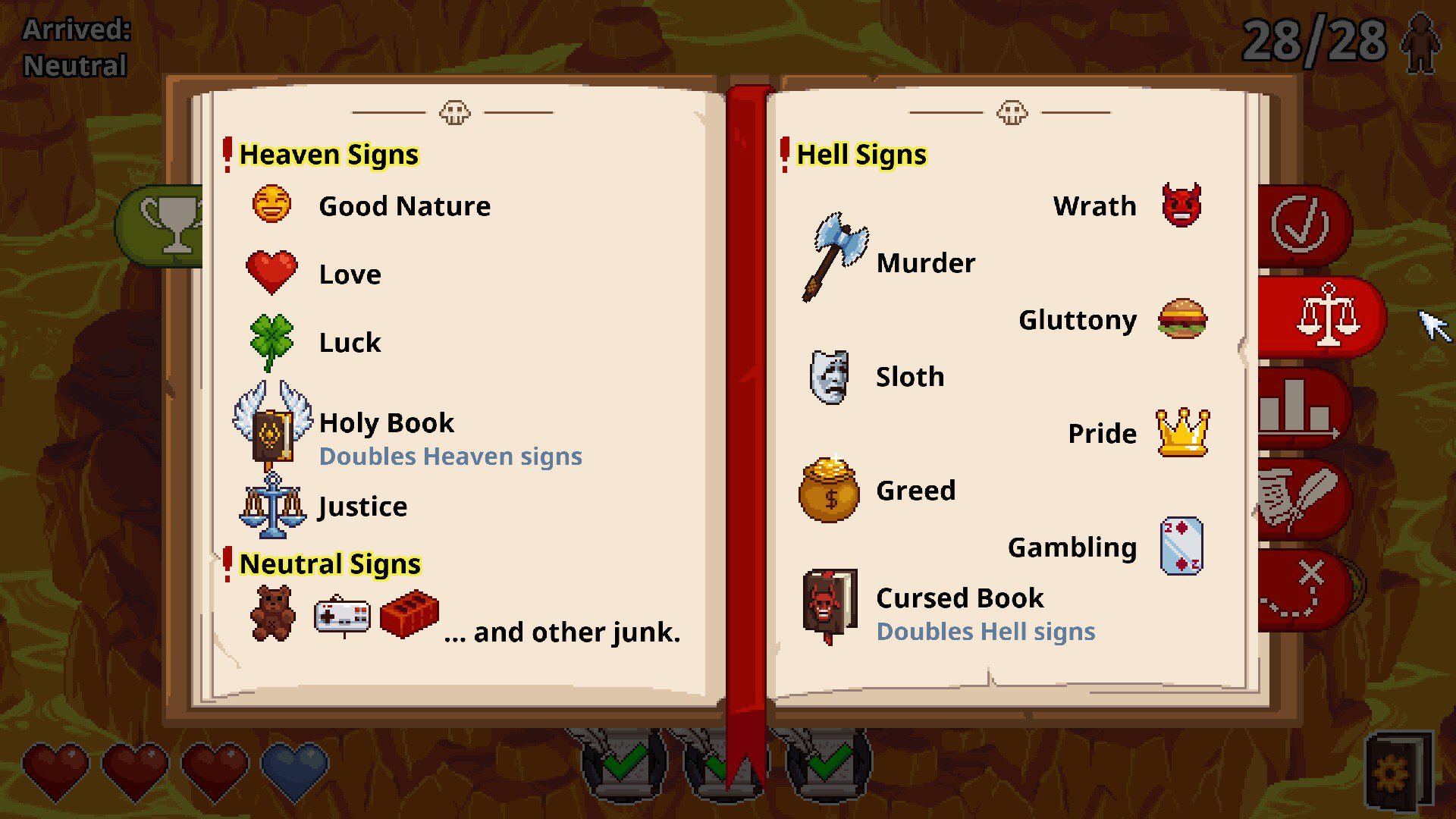 Over time, some new rules start to get introduced, as well as exceptions, such as some characters like clowns who would always go to hell, or specific situations when characters would go to certain locations, such as metalheads going to hell when there’s more than one in play at a time. 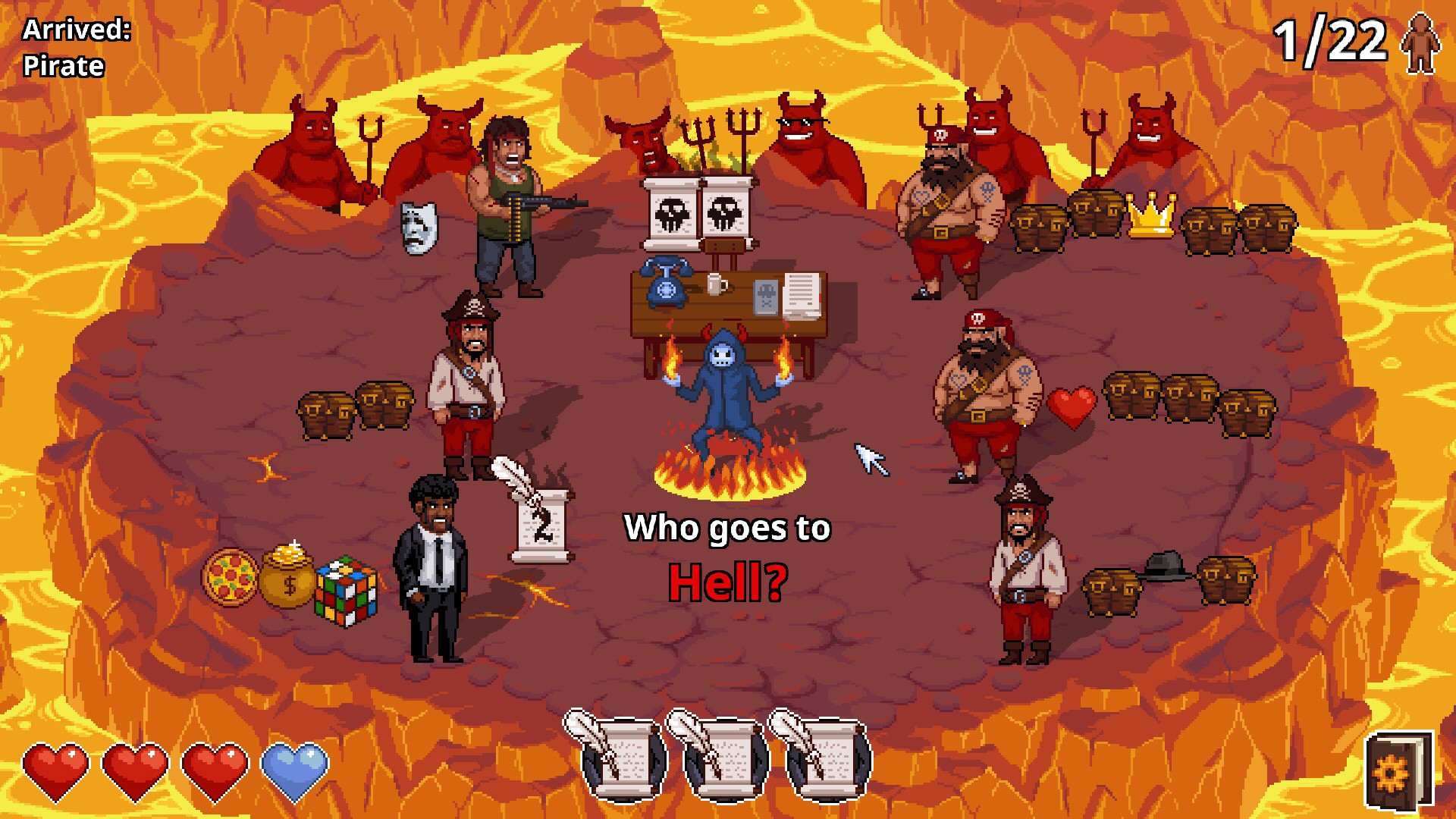 Some clients would also complicate things, such as adding new traits to other clients in play or trying to mess up your day in some way. For example, murderers would attack you and end your workday if you don’t sort them within a certain number of turns, or the bureaucrat who would change the rules and instead ask you “Who has no place in X?” 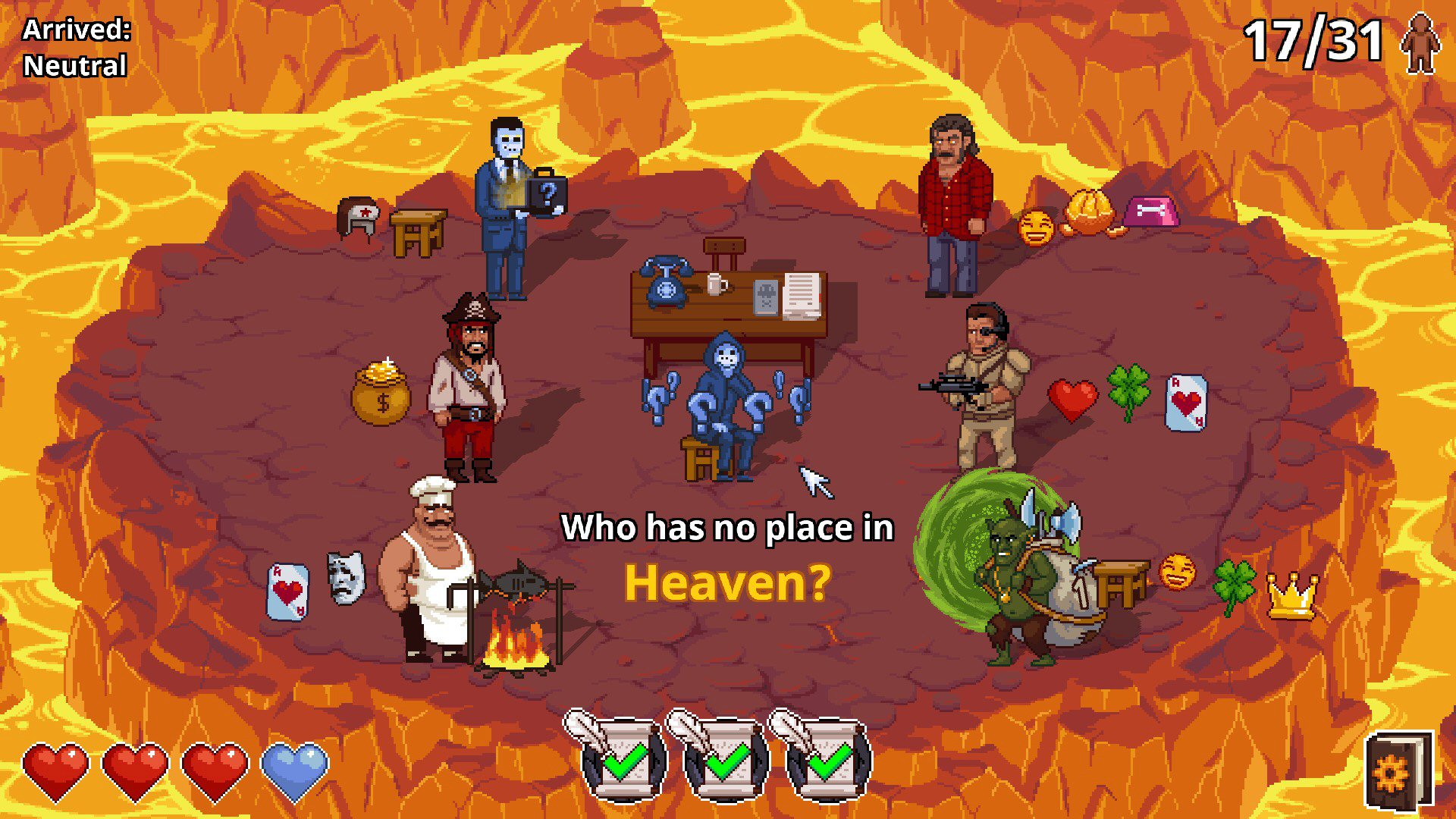 It’s generally great fun and keeps us thinking and trying to remember how the traits and the rules play out together when there are more and more of them as the game progresses.

In addition to our main workday missions, we also get sidequests. The sidequests that we get from our workmates follow certain questlines. Completing these questlines earns us the trust of that colleague, and if we can win trust of every single work colleague, it changes the ending. We can also take up contracts to act as additional goals during missions. The contracts are gotten from the bureaucrat in the office but can also be gotten from each of the four horsemen. These give us additional money and reputation with the specific faction that gave us the contract. For example, if we want to win favours with the War horseman, we need fill up the weapons cart by sorting clients that possess weapons when the cart is near them.

I enjoyed the addition of sidequests and contracts in this game as it provided some extra things to aim for during workdays. The sidequests especially have also played a part in helping to expand the worldbuilding and letting us see how quirky and unusual each of the four horsemen is, as well as all of their servants and workers. 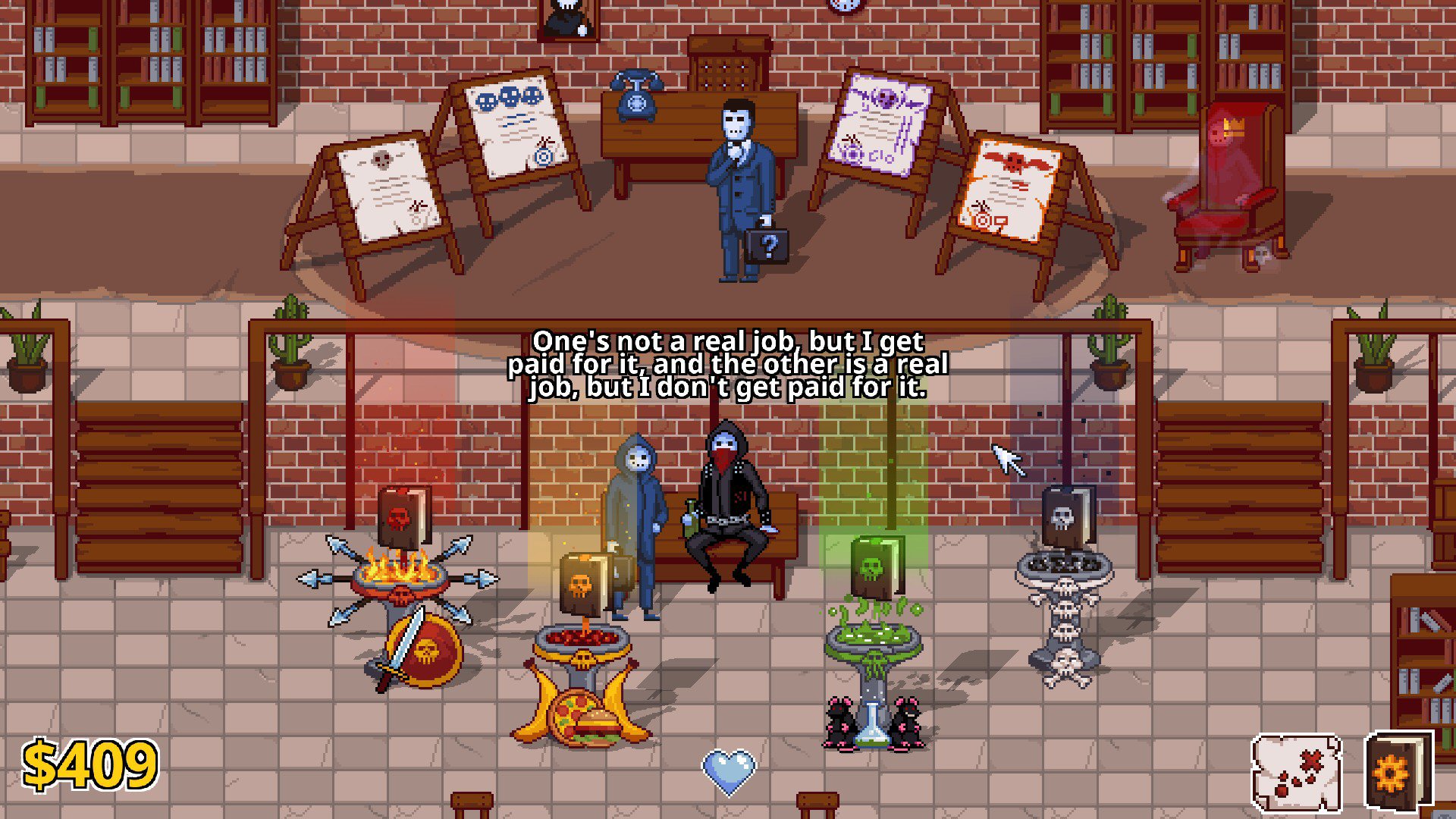 The game’s visuals are fully made out of pixel art characters and environments. It’s all very colourful and beautiful, and the animations are superb. The signs and traits to watch out for when sorting are all very clearly presented, just like in the first game. It’s very rare to mistake some trait for something else. 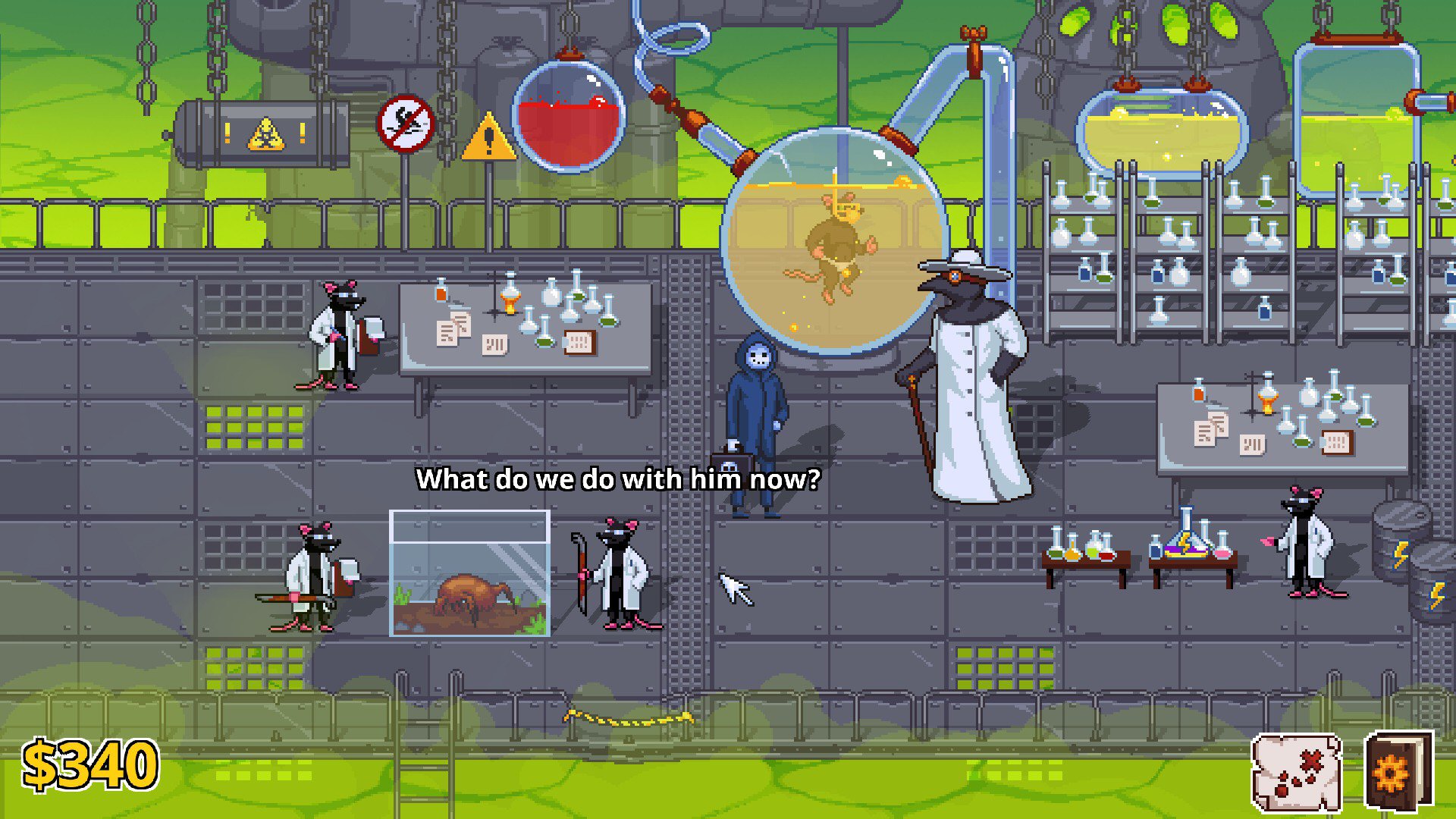 I liked the menus format as well when checking for our reputation, grades for each workday, as well as the sidequest objectives pages. 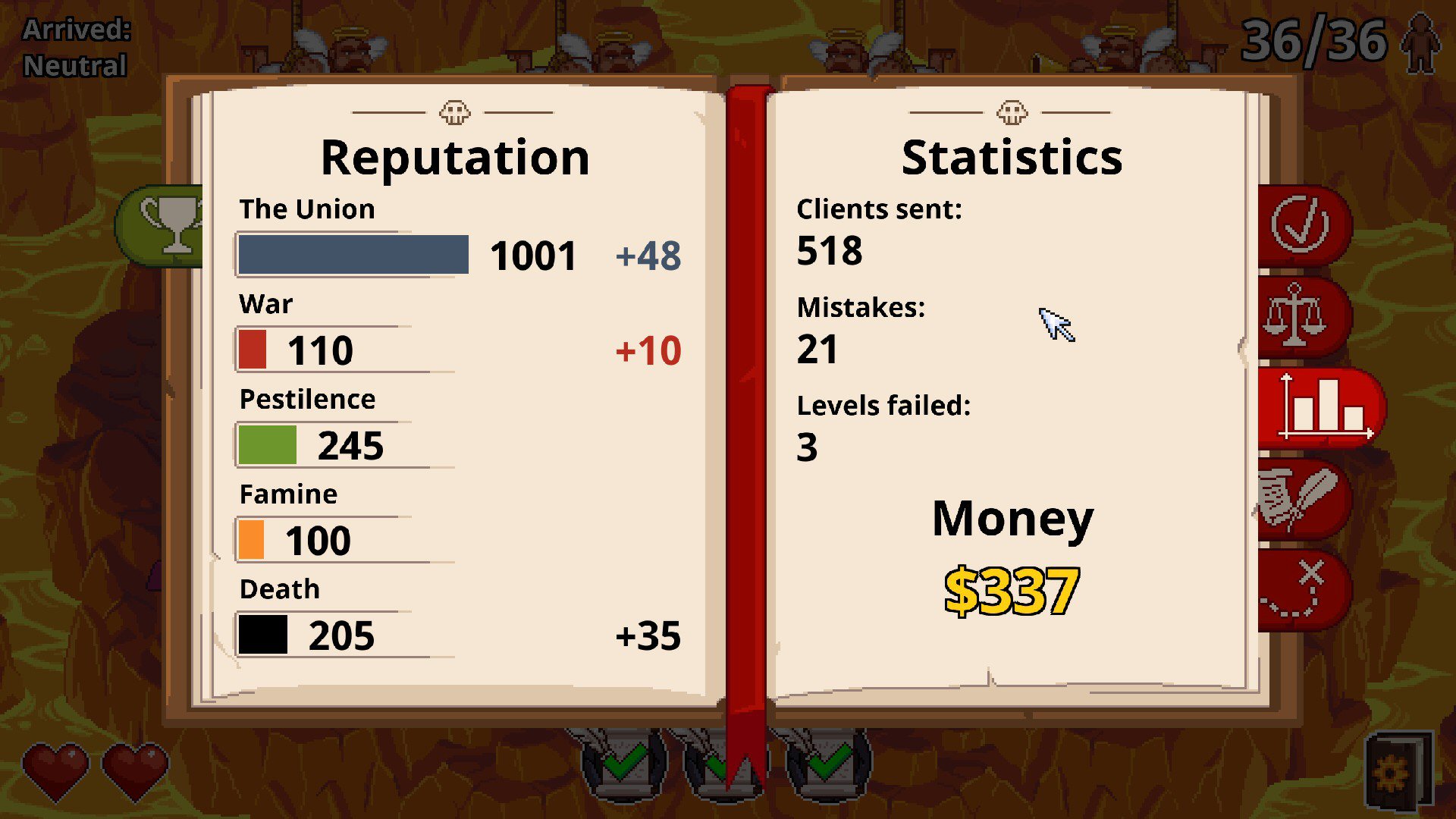 During the times when we can interact with someone to initiate a dialogue with them, the game puts a little speech bubble icon above them. Don’t get confused though – you need to click on the actual character with your cursor and not on the hovering speech bubble as I was originally trying to do when I launched the game and kept wondering why the game wasn’t working.

The music is pretty decent. Every location we go to have their own tune, and the workday sorting has its own one as well. Despite there being just one and the same tune during each workday, I never found it to get jarring. It’s been quite fun and fitting the entire time. Sound effects are also very good and match each action excellently, just as in the first game.

I’ve really enjoyed the second ‘Peace, Death’ game, and I think this second part is even better than the first and has a more interesting gameplay formula in my opinion. It also expands on the setting more and provides sidequests. In my view, it’s an improvement in every regard, even though the first game was also fun. For a game that gave me about 8 hours of engaging gameplay and jokes for one playthrough, it’s very cheap to buy, and getting it at full price is already a steal. What I’d really like to see in the next game in this series, or perhaps in future DLCs, is some new game modes that diversify the existing formula, as I think that can provide a lot more for players to do after they’ve completed the game.