Hexcells Plus is a simplistic puzzle game that is challenging to solve. The soothing music also helps to relax while clearing the levels.

Hexcells Plus is a puzzle game similar to Minesweeper that is played in a hexagonal grid. You need to separate all tiles to blue or black to finish the level.

The game has simplistic visuals. It tries to implement the hexagonal shape on the level selection to make it similar to the actual levels in the game. The interface is also simple and looks elegant with the font choice.

The tutorial is too confusing. I don’t know if it’s because the developer already assumed that people already played their other games with similar mechanics, but the tutorial seems to act as a way to refresh people of the mechanic. New mechanics will be introduced in the same difficulty as other levels, and the tutorial is too confusing to understand in words. I didn’t know what “blue cells are consecutive” means. I ended up solving the “tutorial level” by guessing, but that leads me to my doom since the next mechanic offers another word that I didn’t understand. 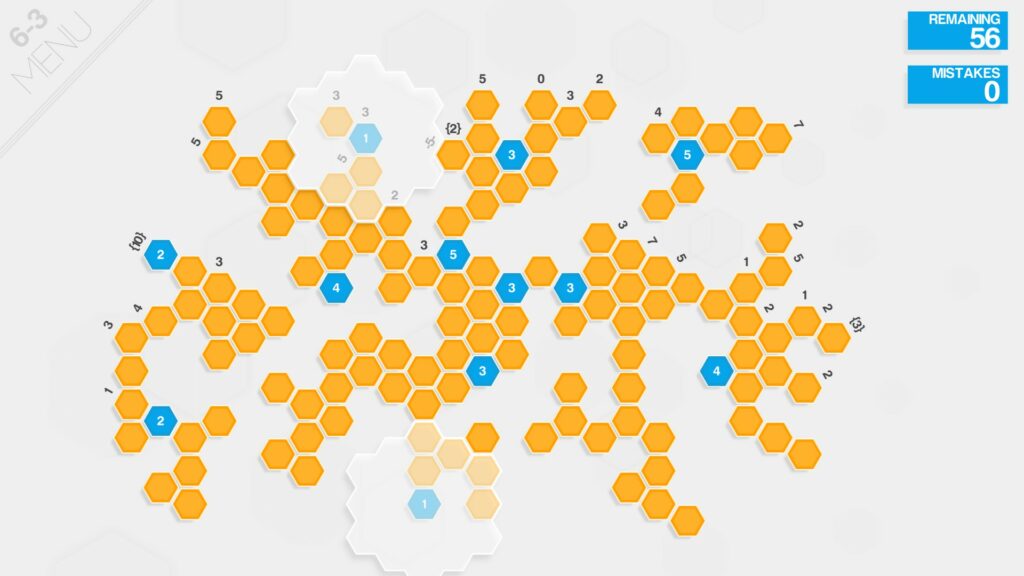 I didn’t realize that there is a feature for “line assist” at first. Some levels can be hard to visualize due to the mechanic and tile placement. I had to do them manually before I realize this feature, and I was already halfway in the game already. This might be caused either by the confusing wording on the tutorial or my lack of understanding of English.

I finished the game in 9.7h with all achievements. One achievement requires you to clear all levels without mistakes, so I end up restarting the level every time I made a mistake. However, the game doesn’t seem to offer a quick hotkey to restart the level.

The game can be challenging, especially at later levels. It claims that all levels can be solved without guessing, although I had to guess some of them. Some levels require you to think of the possibility of the tile placement based on one or two mechanics, and I wasn’t keen enough to see the trick sometimes.

Hexcells Plus is a neat puzzle game to play. The design is simple enough to familiarize yourself and puzzles are challenging to solve. Despite my difficulty in learning how the game works, the game becomes fun to solve afterward. I still hated the simplistic levels since they can be tricky to solve, but there are not many levels like that in the game. The sound that happens when you click on the tile is also soothing enough, especially with it showing a different tune depends on how fast you are clicking the tiles. Needless to say, it doesn’t take long before I become absorbed in the game and finished the levels without realizing it.