Do you like portals and cute little guys in robes? I do.

Lo, doth history repeat itself. Here we are again, with yet another platformer. Somehow, they find their way to me – or, rather, I find myself oddly drawn to the aesthetic of them regardless of my typical aversions. In the case of Unbound: Worlds Apart, the main character’s image jumping through a bright, colourful portal in an otherwise dark, dingy world really drew me in. Sometimes, it’s that easy to draw my interest in games. I read about it, saw it was a platform, but also enjoyed the various portal/level gimmicks present and decided to give it a shot.

Admittedly, the game surprised me. It starts off simple enough, and while the story mostly stays along the course I was expecting, the gameplay evolved in ways I didn’t anticipate. This game got hard- or maybe that’s a testament to my limited platformer skills. Still, beating this one took real effort. 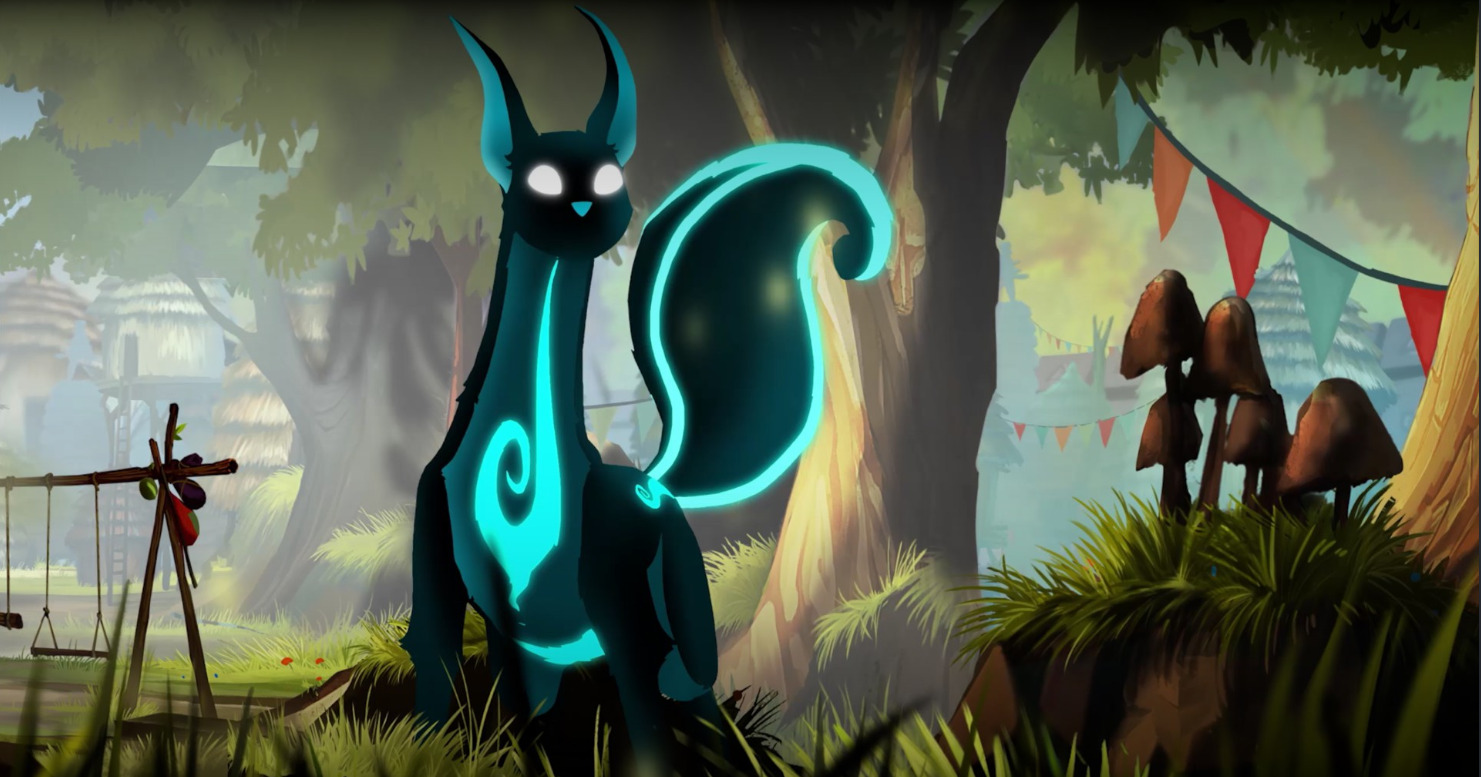 The game opens with a well-animated short-cutscene. Our little be-robed hero wants to play with the other children, then a portal opens, and then a strange creature appears. It’s unclear precisely what caused this, but it seems our player character (Soli) is the one responsible for the portal opening somehow? Or, perhaps, it’s simply a side-effect of what happens next.

The place that Soli is from has a large crystal that powers a magic gate, one that used to be used to travel to other worlds. For one reason or another, this stopped around the time Soli came to the village, or so we are told. One of our parents is named Karra, and they tell Soli to go and play and that they’ll be right there one our hero gets back- which constitutes one of the most obvious warnings ever.

Then, the village gets attacked. That crystal splits during a ceremony meant to help “spread the word of Rhy across the sea”- which is another word to talk about the collective space across multiple worlds. The village starts to burn, and Soli runs back to see Karra telling us to run and then being stomped on by some giant, spider-like creature. Soli is their miracle, however, and they seem determined to stay alive despite all that they’ve witnessed.

Queue the gameplay, and the story progressing from there. 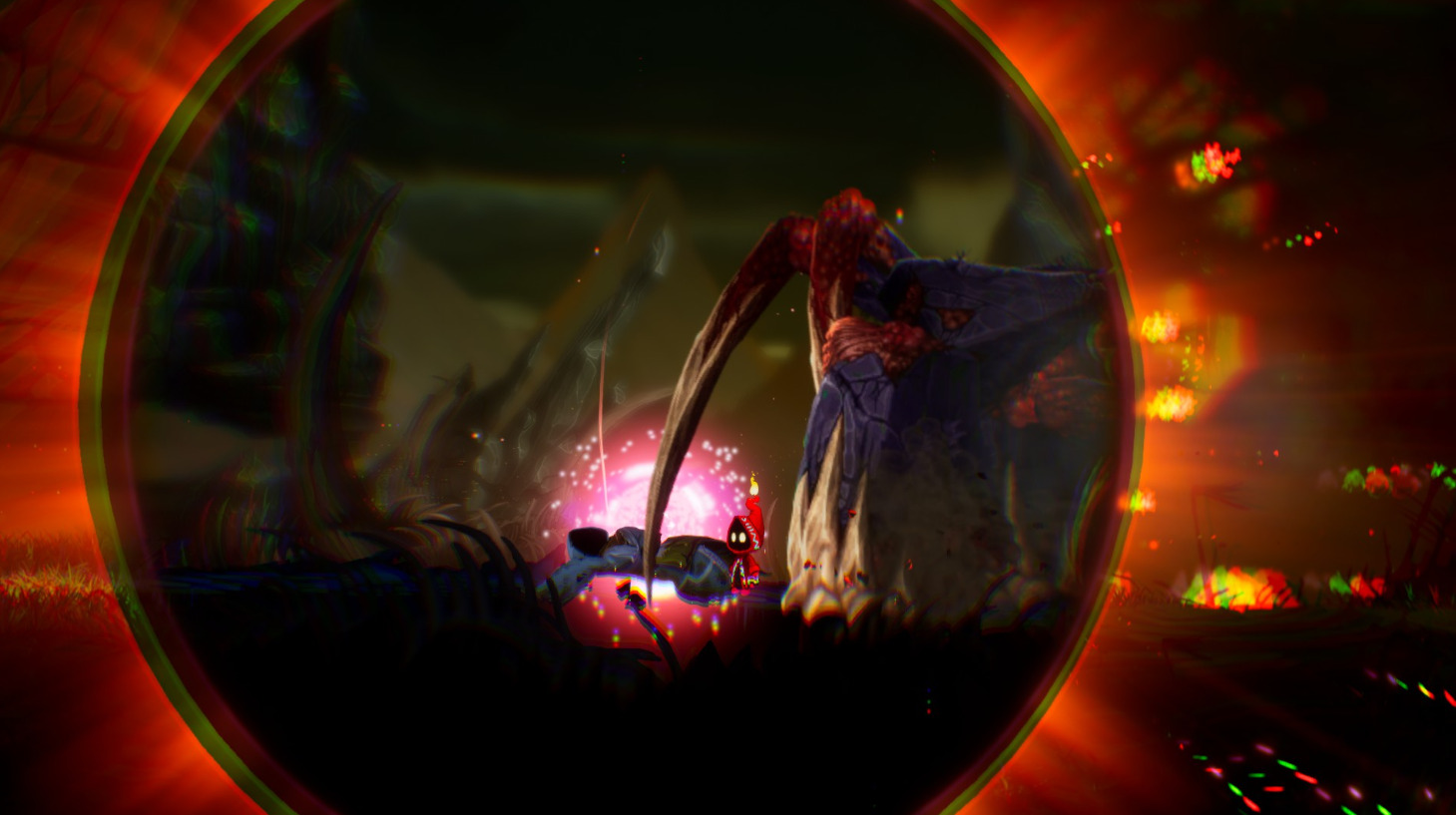 The animal companion that came through the portal at the beginning meets with Soli periodically as our hero adventures. They offer insight into what once happened to their world- and apparently what’s about to happen to Soli’s. Apparently the creature that killed our hero’s parent was a Demon, and there’s a Demon Lord named Arawen that’s going to corrupt the entire Sea of Reality unless we can help defeat him.

Soli is a child, but yeah. They’re the only one that can do this, and hopefully save everyone along the way.

Visuals are what initially drew me to Unbound: Worlds Apart. I looked the game up, saw the colourful character in the thumbnail, clicked through, and then watched the opening cinematic from there. There’s something enchanting about hand-painted or drawn visuals and backgrounds, and indie games often paint interesting characters, silhouettes, and contrasts that I seem drawn to. Enemy silhouettes all differ easily enough to quickly determine threat- and often times the design of the demons is enough to acknowledge their move sets before engaging them for the first time.

Level design varies by area, and while some have a slightly muted or muddled colour palette- at least for me- Soli remains easy to see and thus advance through the levels. I consider being able to see my character well the most important part of a platformer, and I never once struggled to see their bright colours against any area’s backdrop. 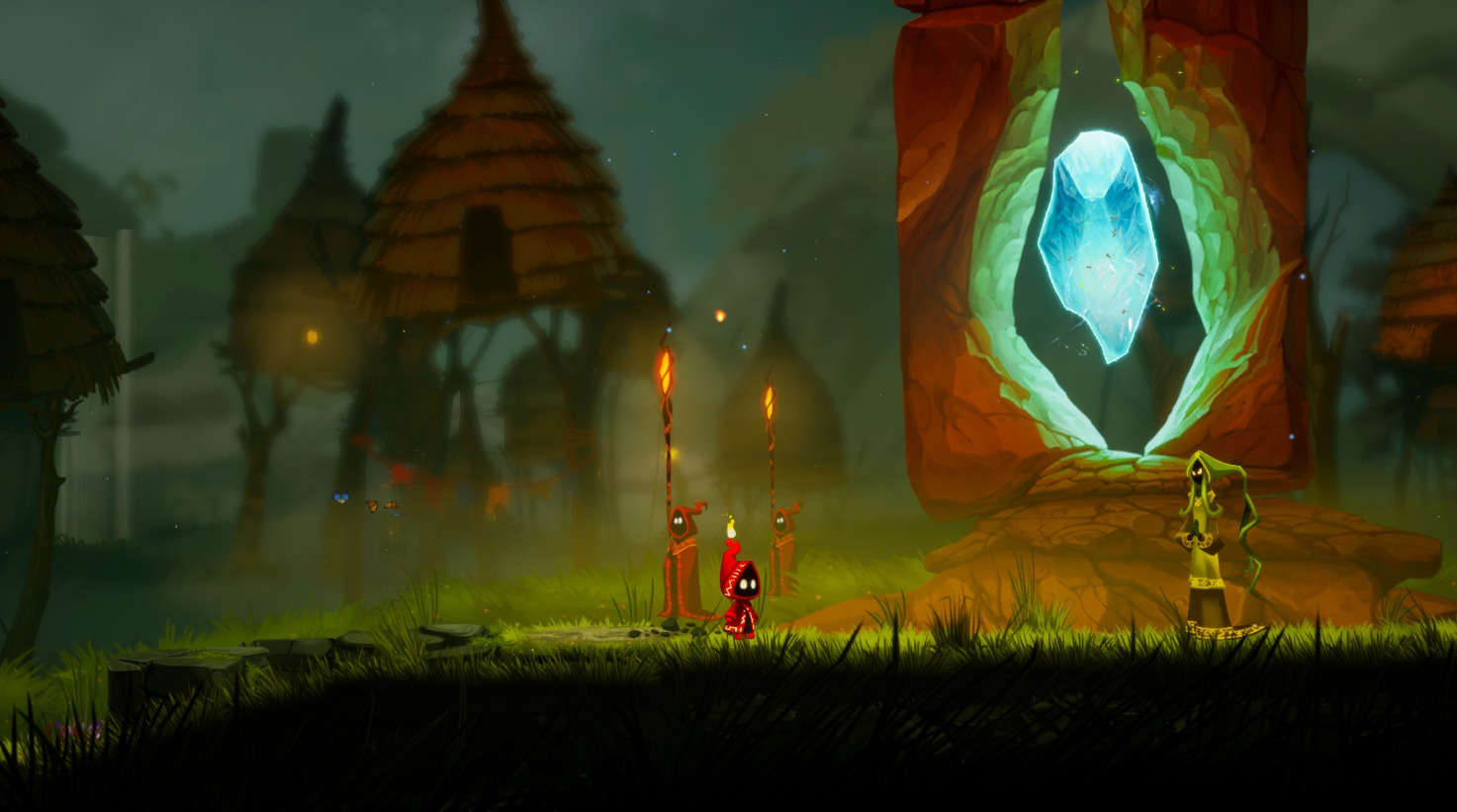 Yes, Unbound: Worlds Apart is a platformer, but the key mechanic of the game involves portals. When Soli sets out on their quest to get crystals to unlock the path to Brom- the guardian of Vaiya, who can explain more about what’s to come- we begin our adventure. Portals can’t be used in every area, but when they can they all come with various effects. Initially, the game eases us into this. It lets us peek between worlds, seeing platforms and objects – as well as monsters- that aren’t present in our “home” world. The visual divide is always apparent, with colours contrasting and a hard, circular shape around Soli and the rest of the level to show the immediate area they have control over.

Of course, this is only part of the game. Our portals must be used to interact with levers, movable blocks, high walls and platforms, and even monsters that Soli can use to advance through each level. Honestly, this is one of the best aspects of the game. Some portals slow certain things down, some turn you into a block, some make you really small, some turn dangerous projectiles into bubbles you can travel through, and all of them are used to progress through whatever area you get them in. 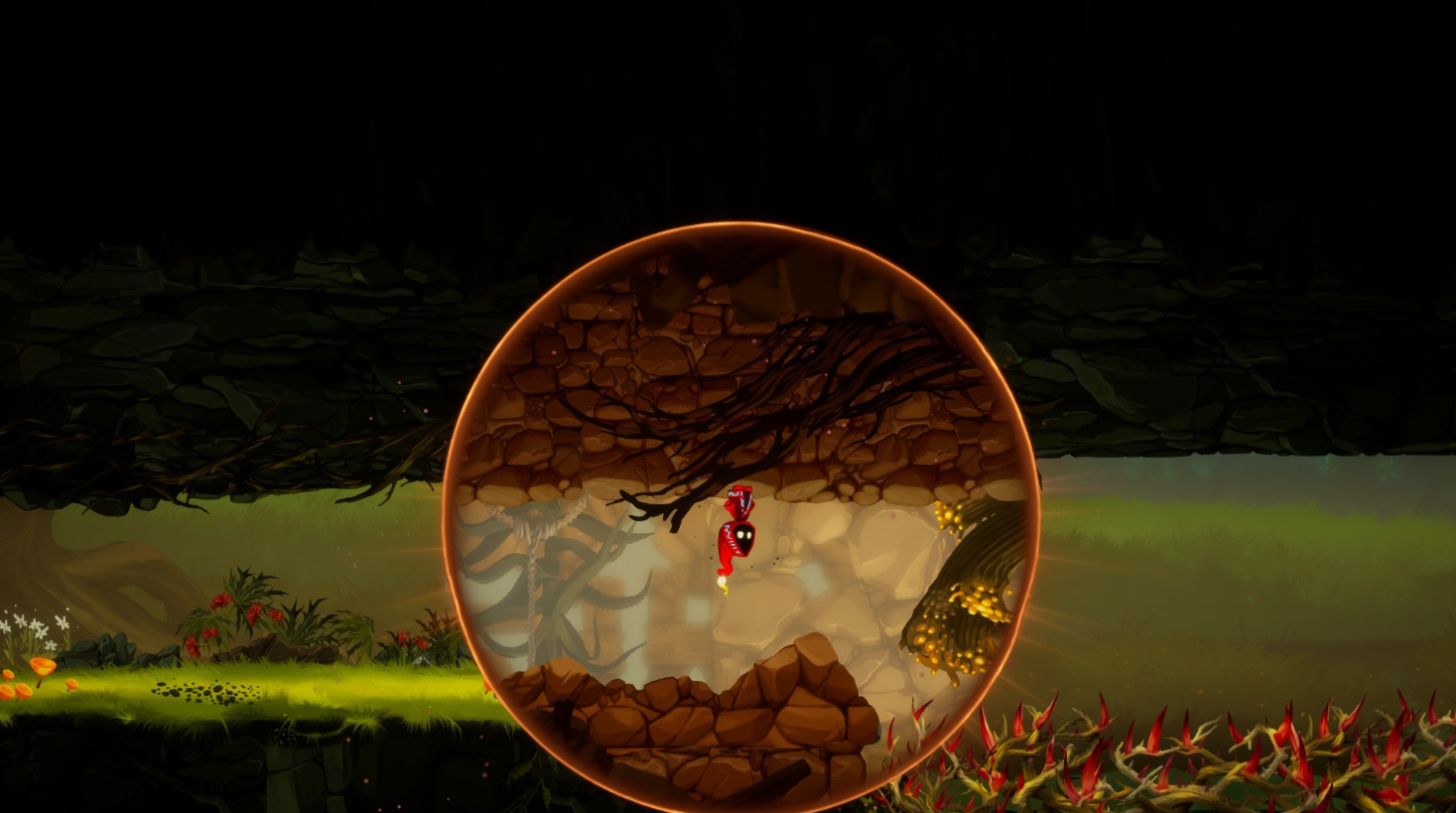 Soli isn’t a very durable character. The game goes by the following rule: if you get hit, you die. It’s that easy! Thankfully, it always spawns you decently close to the last place you were at, oftentimes even before the arches you go through, (that give you your portal powers per area) or the teleporters. This alleviates a lot of the frustration. I die because I whiff a jump due to basic incompetence, I respawn 5 seconds away, I jump and die again. Rinse, lather, repeat- then learn. Sometimes, Soli has to run from enemies that he cannot fight and wait for the level to take care of them for him. This was often one of the harder parts of the game for me, for obvious platformer-challenged reasons.
There are also boss battles in the game, and they end up playing out an awful lot like old Zelda or Mario bosses. You’re using the gimmick from whatever portal you’ve gotten recently to exploit the boss’ weak point, and if you get hit, you die!

Finally, it’s worth mentioning that the game gets considerably harder in the last half. I’m talking like, I had to replay things maybe double the number of times I would’ve at the beginning. At first, I chalked this up to my own ineptitude, but it seems I’m not alone in my experience- the game wants you to work for those endings. 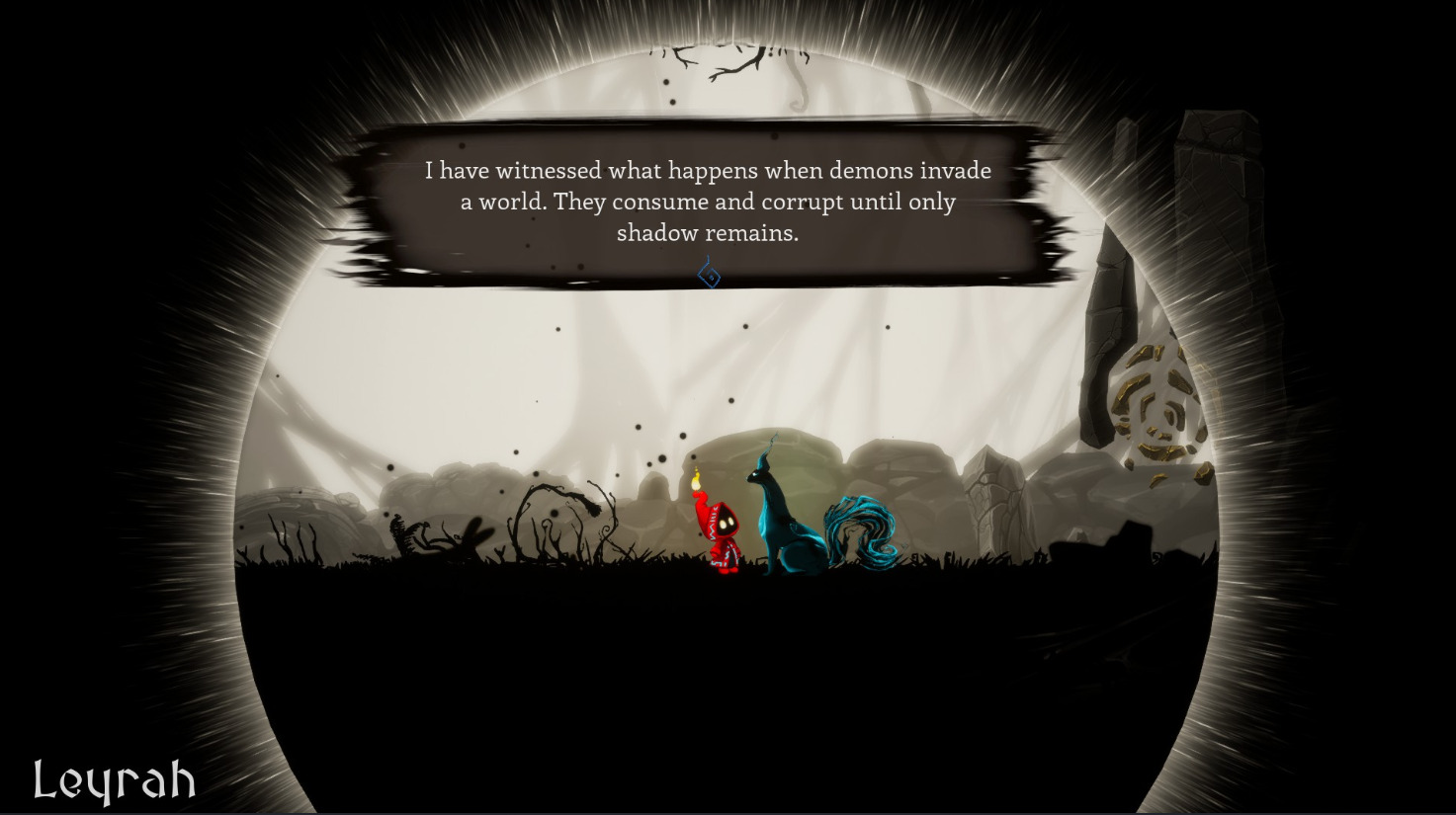 I am not sure, if asked what my favourite platformer is, if I would have an answer. Spyro, for nostalgia’s sake? Hollow Knight (though I’m still in the process of beating it)? The Ice Age game?
The point I’m making is that I don’t often feel phenomenally strongly about platformers. When I do, it’s because they have some sort of story at their core, or characters with personalities that stick with me once the game closes- like the bug game. While Unbound: Worlds Apart didn’t quite do this for me, the gameplay itself kept things fun, interesting, and even occasionally managed to stump me on a puzzle for a while. I enjoyed my time with the game, and will offer this as something that concerned me until I kept playing: there are two endings. If you run through the game and play it quickly, you can make it to the final boss in only a handful of hours – like 5 or 6. That effort, however, nets you the bad ending, and I’ll admit- it was altogether unsatisfying and sorta sad. If you want anything else, you’ll have to go through the levels to save the villagers. I found the additional effort worth it, if only to salvage what was, otherwise, an experience I typically avoid.