Dying Flame lets you explore an abandoned house with the lack of light source. You’ll have to be constantly on high alert, walking in pitch-black whenever something comes out.

Dying Flame is a horror RPG Maker game about a man that woke up in an abandoned house. Travel around the house with your lighter and solve the puzzles to understand more of the story.

You only have a limited view due to the nature of your light source. Everything looks dark and the subtle sound in the background does a good job to increase the overall atmosphere in the game. The rooms are made simple, but distinct enough to give you clues as to where you are located in case you need to walk in the dark. My praise goes to the jumpscare – they are well executed to surprise you with their appearance.

The story will reveal as you play the game. Journals are scattered in the building to let you make sense of what’s happening to the main character’s past. This also means that you will only understand the whole story if you fully explore the house and collected all journals. Moreover, the same also works for the ending. There are 4 endings in total, and you’ll get a better ending based on the items that you have collected. To be honest, I only experienced one of the bad endings in my playthrough, and I didn’t get much from it.

The game does a good job of incorporating the game’s title into the visuals. You play in a dark area with only a lighter in hand as your light source. The lighter will die out from time to time, forcing you to flick it again to get you some light. The thing is, you need to flick it several times to have a chance of lighting the screen, giving you more suspense in case something goes through.

Interacting with all objects is required to find what you need. All objects in Dying Flame, including walls, are interactable. Hints will be provided in some areas, letting you know what can be done with an object that is needed for a puzzle. It’s then your job to explore the house again to figure out what should be done, whether it’s to find another object or do a certain action. 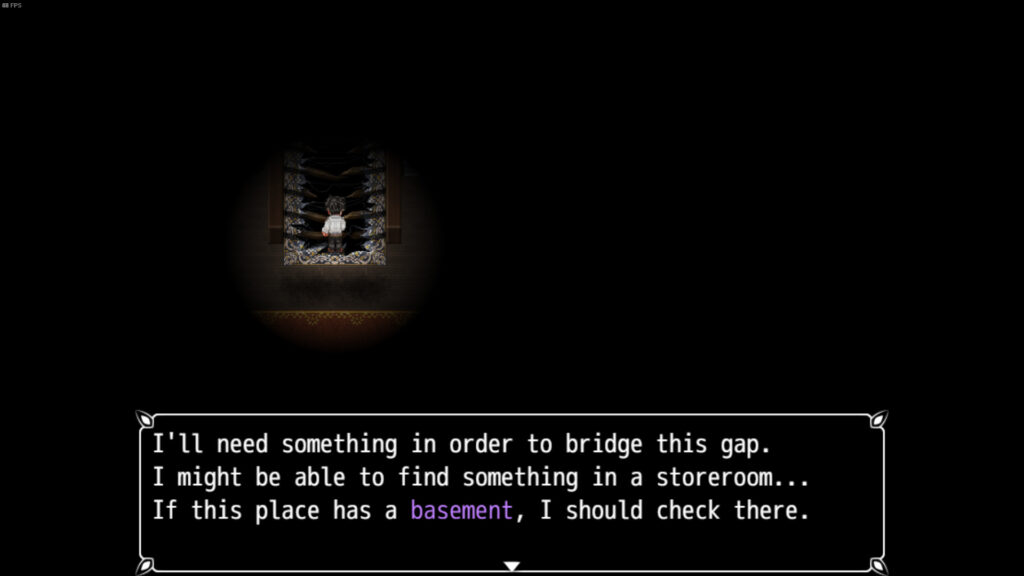 It’s easy to get lost. The building that you are trapped in is huge with a lot of rooms in it. You need to remember where most things are located and the game will require you to go back and forth between them. Some rooms are locked, requiring you to get back to it when you obtained the key in another room, while some will transform into something else when you revisit the area. The darkness and vision limitation also makes it harder to navigate the area and although there is a general direction in the foyer, some rooms are not included in it.

Puzzles can be difficult even with hints. You have to solve a set of puzzles to get key items that can affect the ending. However, some puzzles can be problematic to solve. Some of them require you to use your brain to find the solution, while some simply are lacking direction on what to do. I even had to spend an hour trying to solve one puzzle because of the lack of lighting. One puzzle also requires you to listen to a tune, and as a tone-deaf person, I found it hard to solve. Luckily, you don’t need to solve everything to finish the game, although you won’t be able to get the best ending with this.

That being said, some puzzles are cleverly done. It might take some time to figure how to solve some of them, but it was fun once you get the hang of it. This doesn’t apply to all puzzles though, since there are some that I couldn’t figure out even though I already know what to do. The puzzles’ difficulty might vary for some people, but I found them to be on the harder side. 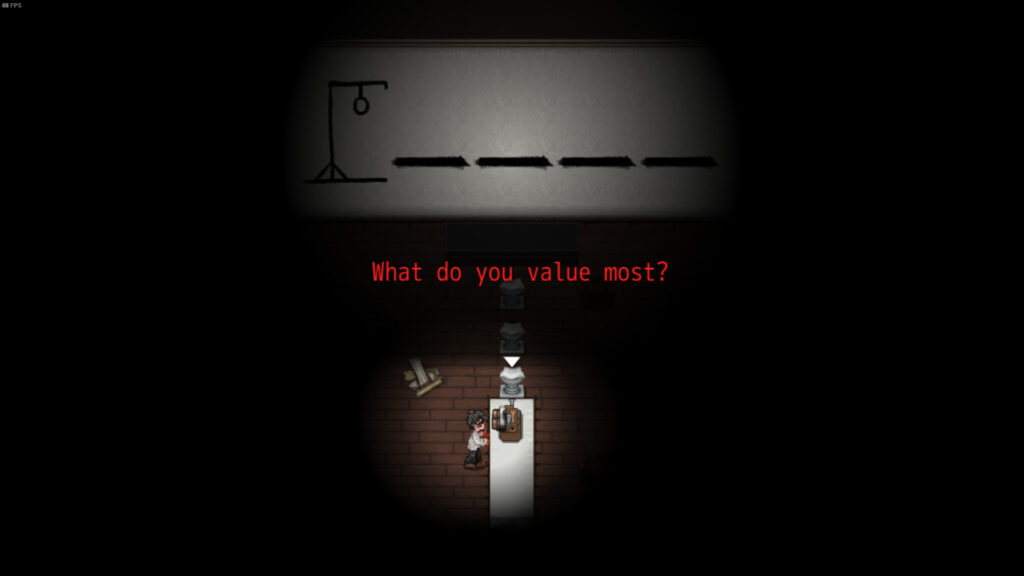 Jumpscares will happen from time to time in the form of a monster. The appearance of the monster is random, and when it does, you are forced to turn off your light and follow your guts to exit the area without it noticing. However, there were times when I was stuck between two areas since going back and forth between them are not going to drive it away, forcing me to travel through more than one area to get away from it.

The suspense of the monster appearing might get to you at the start, but it will turn into annoyances as time goes. Imagine you going through some areas, only to go back to where you came because you met a monster on your way. Moreover, sometimes they also blocked the exit, forcing you to either run somewhere else, hoping that it will move from that spot, or get killed. The fact that you must load from your last save if you do the latter one also doesn’t help to make it easier. 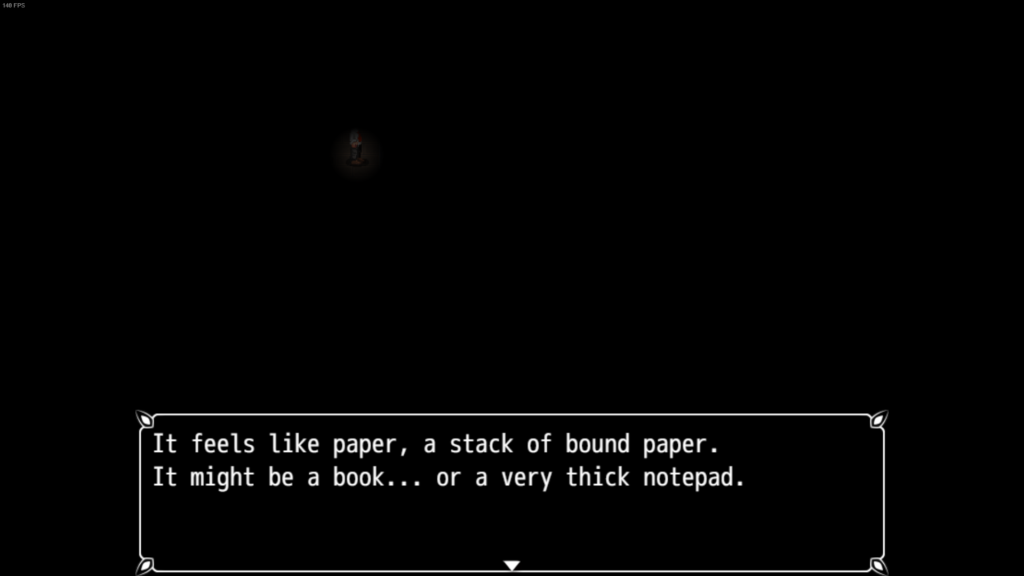 You’ll have to walk in pitch black most of the time. Despite it letting you see some part of your feet whenever the light is out on some occasion, the light seems to go out most of the time, forcing you to walk in pitch black. It wasn’t fun to play in the dark, and the fact that you can die from falling through cracked holes doesn’t help either. The game helps you to let you know of your position if you try to interact with any object you bumped into, but doing this for more than one screen can test my patience.

I finished the game at 4.4h with the worst ending. I didn’t realize that going through a certain area will lead me to the ending and I finished the game without clearing some puzzles that I was stuck on. I tried to load my latest save to finish the remaining puzzles, but some of them confuse me since I didn’t know where to start. Note that I did understand the gist of what I needed to do in some puzzles, but strangely, I kept on missing the important details. I ended up looking up a guide to get the ones that I missed, but apparently, it seems that I missed something else since I still got the same ending. Since I was already tired from being on the run with the monster every time I was traveling through the house, I ended up leaving it as it is.

Your save is limited to the number of an item that you have. I know that it has a certain significance to the story, but the fact that you are forced to finish the game without saving too much isn’t fun.

As someone who is scared of horror games but still wants to play them, Dying Flame does its job well. It gives a nice jumpscare from time to time while still proving to be a challenge with its puzzles. The lack of light and the tense atmosphere from the monster’s appearance keeps the suspense going, and you’ll be constantly on a high alert, panicking whenever the lights go out. However, this can be annoying if you have finished seeing everything that the game has to offer since the monster can hinder your progress, eating away your playtime. All in all, it’s still a nice game if you are looking for some jumpscares, and I would recommend it if you are a fan of similar games.