A new superhero beat’em up is in town

Mayhem Brawler is a new indie entry into the 2D Beat’em Up genre, which has and is seeing a big uptick in competition with the critically acclaimed Streets of Rage 4 and River City Girls with more to come.
The game looks gorgeous but there are a few things that need to be talked about when it comes to gameplay. 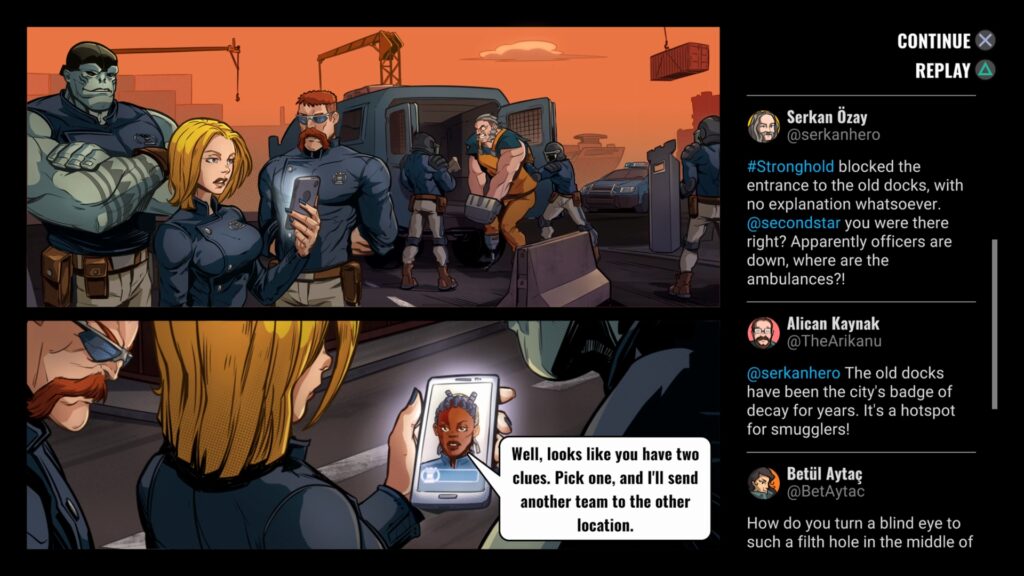 In the world of Mayhem, Superpowered Individuals and Mutants are the norm and this is why you’re following the protagonist trio as they try to uncover a mysterious string of events that involves werewolves, magicians, vampires, and more.
One of the more unique features is the ability to choose between two paths after finishing the mission and depending on your choices you will get one of the three endings. 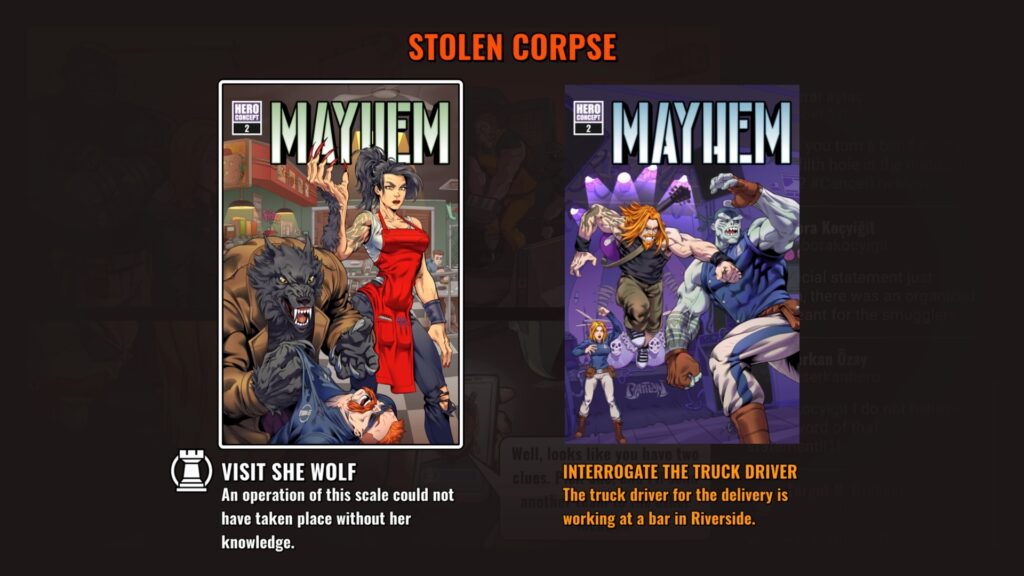 Overall the story is nothing special but it does its job and there are quite a few jokes to set up a relatively light atmosphere. Though some of them are a matter of taste due to current sensibilities. If it were content on Disney+, I’d expect a light trigger warning.

The Gameplay: Basic and Balanced for Multiplayer?

The game consists of a story mode with branching baths and three endings and an arcade mode for some quick access to pure brawling like the olden times. There’s multiplayer with up to three players though there’s no online. Steam’s Remote Play or PlayStation’s SharePlay can theoretically levy this.
There are 4 difficulty levels, if you’re playing solo I highly recommend going with the easiest one called Cadet. 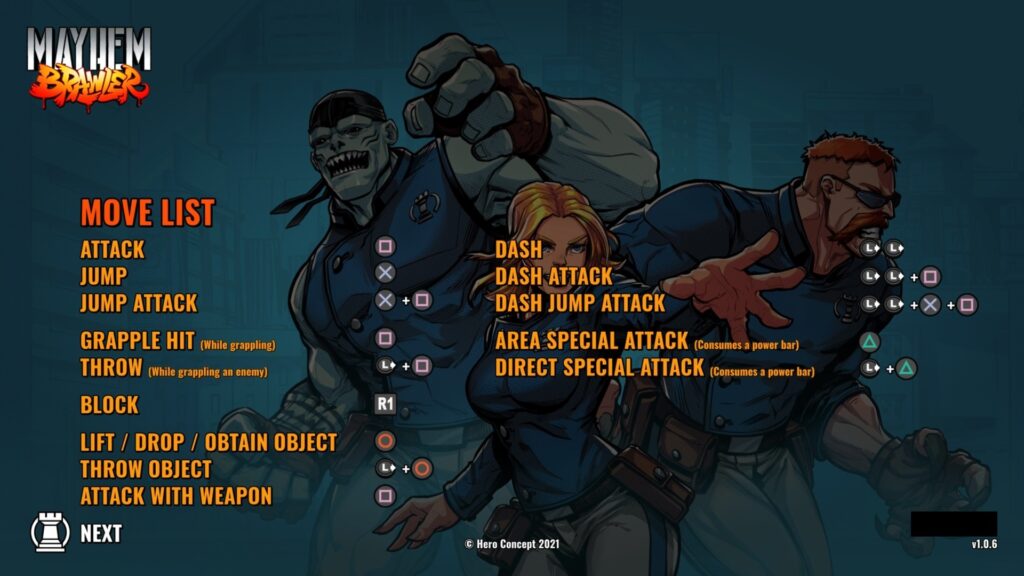 Based on classic 2D Beat’em Ups you will find the usual Actions like a single Attack button, jumping, dashing and special moves. The bigger stand out from the standard is the guard button, which is something we’re going into more detail later on. 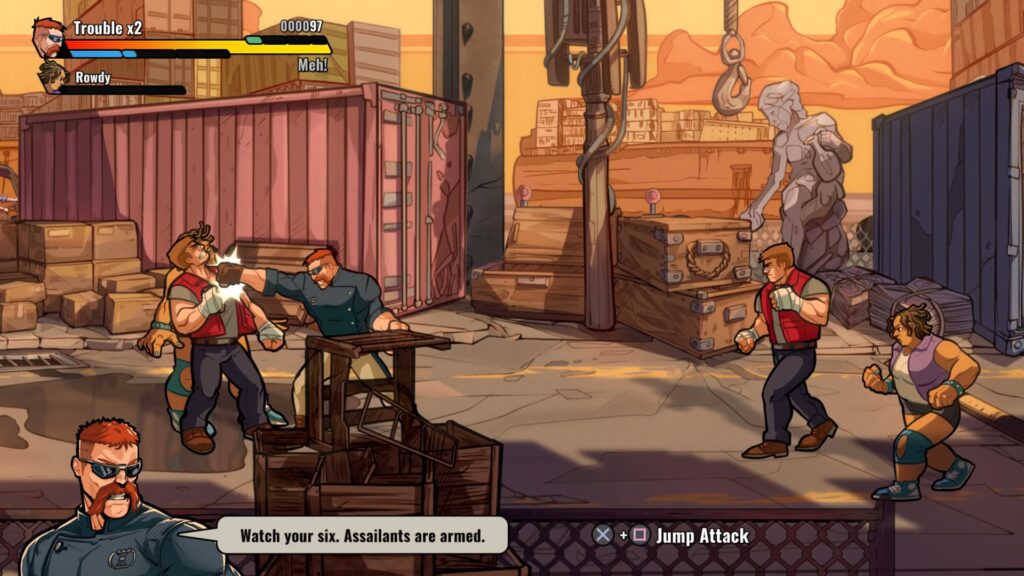 Each character has their unique attack string as always. You start with fast light attacks with the penultimate attack drawing out a special stun animation before you send them into the air with the finisher.
You can continue to attack them after knocking them into the air but there’s no juggle system available. In this case, the opponent just keeps falling while each hit stops them for the duration of the attack. You can hit them with a well-timed jump attack on the way down just as it’s implied in the trailer.
The most unique use for this is probably a dash attack as it inflicts them with a character-specific debuff condition. Speaking of dash attack, those are always a knockdown. 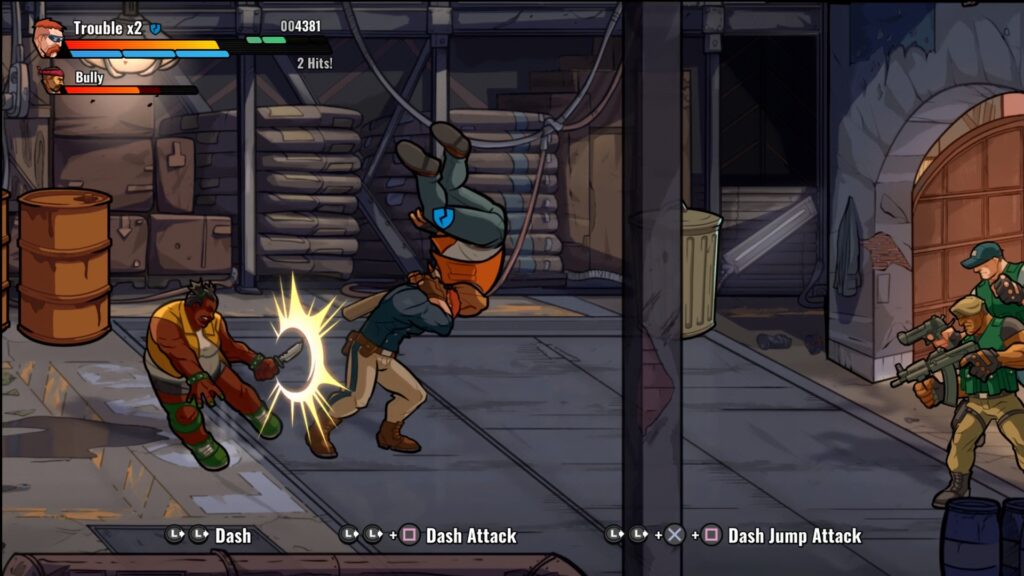 You can throw most enemies at any time by just getting close to them. The penultimate attack offers a good timeframe to get into the grapple and dish out even more damage. You can continue with its unique attack string or go for an invincible throw that can damage other enemies.
Just like the dashing attacks, the final attack of the unique string will inflict their debuff on the opponent. 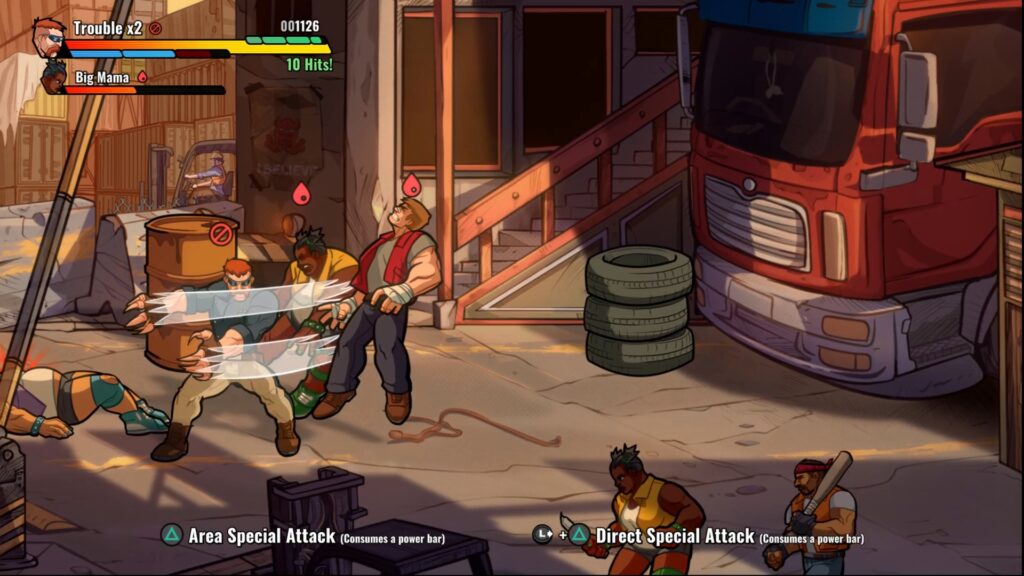 Unlike many of its relatives, you don’t need to sacrifice HP to dish out Special Attacks that are invincible and inflict the character-specific debuff. You get a Power Bar with 3 parts instead, ergo you can stock up to three of them. You raise it by either damaging enemies or taking damage and it’s relatively fast.
Each Character has two Special Attacks. Neutral and Directional. The neutral one is a simple but short attack damaging everything around them, which is very useful to get out of a melee pickle.
The directional one offers a little bit more range and possibly damage but it’s only damaging in one direction.
I couldn’t find any good utility for either of them outside of escaping an enemy’s clutches as they aren’t doing great damage or offer anything favorable outside of the debuffs. Outside of a finishing blow, there’s not much use to integrate them into combos and the attacks only lead to a knockdown, thus taking away all potential for combo extensions.
Due to all of them being relatively the same, there isn’t any additional utility when it comes to using them for initiation either. To be quite honest, I’m not even sure why there are two Special Attacks when they are so similar which in turn makes the characters very similar as well.

Guard
This is quite a unique design decision as not many in its genre have a guarding option. I got mixed feelings about this one as it’s strong but weak at the same time. It’s strong because you can guard even when you’re getting hit and you can build up some Power Bar.
At the same time, it only reduces the damage taken and they can still crack open your guard with a pincer attack and hitting you from behind. It doesn’t sound like a big deal but it is because you will get yourself into a lot of pincer attacks. Another strike for the guard is the fact that there is guard stun and when many enemies are stun locking you, you’ll have to resort to the Special Attacks otherwise you get into an even worse situation than not guarding because they will just keep depleting your HP. 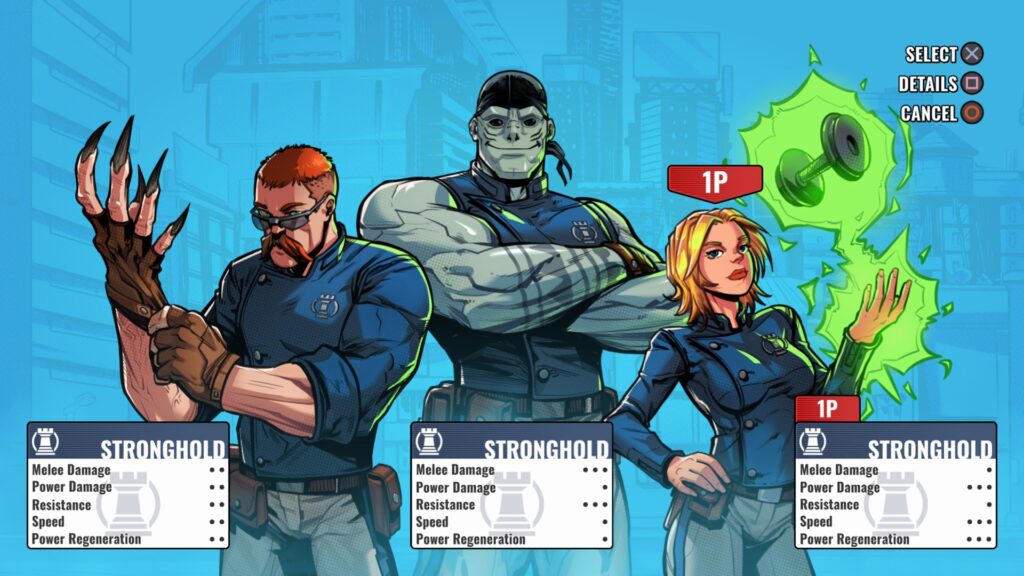 You can see the biggest differences in the stats. Since we’ve gone through nearly everything we need to talk about what the real difference is. Honestly speaking… not much. Star is a little bit faster than the other characters but she does lower damage. Unlike the other two characters, she can’t lift heavy objects despite seemingly having telekinesis as a special skill within the lore.
Dolphin can walk around while grabbing an opponent. It’s not much but it’s something at least.
Trouble is like a compromise between both by having moderate speed and moderate damage.
Overall, it’s a rather classic take on character diversity in terms of gameplay by having only slight unique differences. 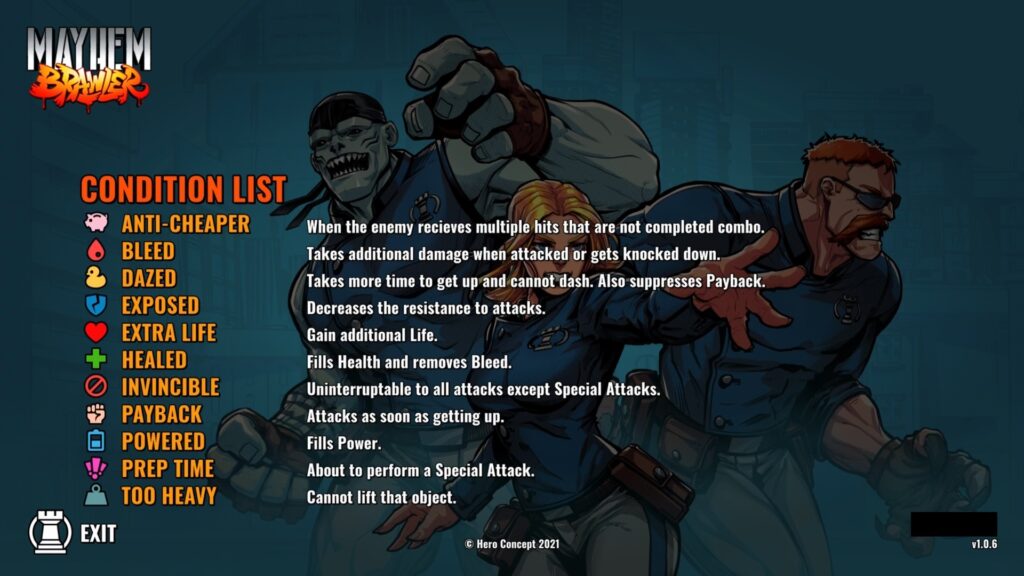 This is one of the unique features of Mayhem Brawler. Each character has one specific debuff they can dish out like Bleeding. Invincible attacks are also counted as a condition. However, do the conditions make a big difference? Not that I know of. It helps a little bit easier to specify certain attacks but I can’t say it’s a game-changer.

Weird design decisions regarding Conditions
One of them is the Payback condition. It’s used either to prevent stun locking as they automatically get activated if you hit them too much or locking an enemy down when they stand up.
The issue is that these things are not a specific type of thing. Payback is used for the majority of the enemies in the game. This leads to a hampered offense for the player as you can’t keep on their tails.
The most confusing thing is that some mooks can regenerate health. Not only do they have enough HP to take about 2 combos but add HP regen to it and it’ll take even more time to take them down. Very weird and not sure what the intent here is.

Items
The items are extremely powerful and sometimes even instrumental in boss fights due to reasons we mention later. Guns are ok but the real winners are melee weapons because their attacks don’t activate the Payback attack of the opponent. Additionally, they get swept off their feet and you can hit them quite a few times while they are in the air.
Depending on the difficulty you get more or less durability.

Enemy Design
Aside from the typical weak goons, many medium-strong ones can take you to town if you aren’t careful. The latter has Payback and some even invincible attacks. That’s not all, a lot of them are capable of extremely dangerous fast forward-moving attacks that reduce the gap between player and opponent in a flash. I haven’t seen this being as common in others as in this game. There’s even an enemy that uses a special move inspired by Mortal Kombat’s Scorpion teleport punch and yes… you need to turn around to block it and no there’s no crouching to dodge it the easy way like in Injustice.
Wait there’s more! There are a lot of projectile enemies and I mean a lot. Not only can they shoot but they also have as much HP as the normal goons, which means they can take one combo and survive. This is a really weird design because these kinds of enemies are powerful as supporting enemies and usually have very low health as a tradeoff. 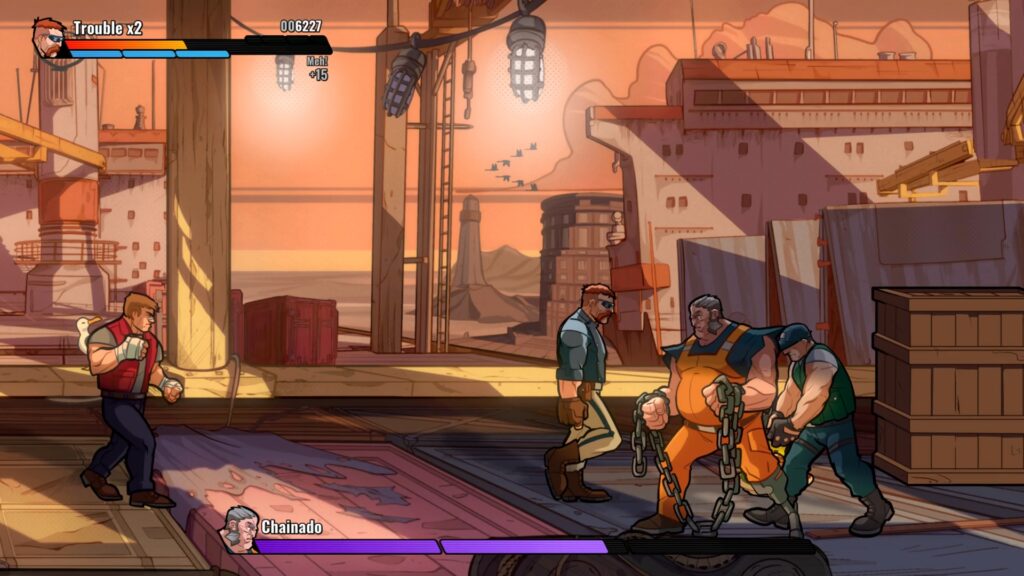 There’s not much to say about the different bosses. All of them have 3 similar phases that start when you chip off one of the 3 HP parts. Once a new phase starts, some goons will come to support it.
I had a very strange experience with some of the later bosses and I’m not even sure if it’s intentional because it feels busted. When they reach the second phase, they immediately return the attack with an invincible move every single time. Prepare either for a long battle or save the weapons in the arena for the later phases. 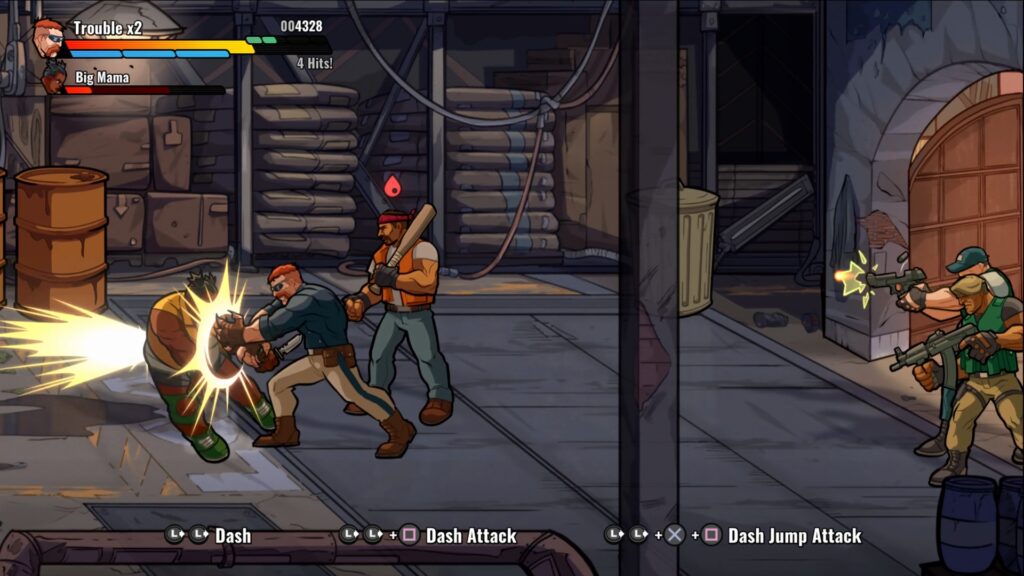 The reason why I’m having this thought is that the majority of the enemy composition consists of either shooters or enemies with a fast sprint-like attack on top of goons. This means that every time you try to attack the normal goons you will get sprung on by the before mentioned special types.
It doesn’t make sense unless there’s a second player to keep the annoyances busy. It’s not impossible to solo the game but we’re getting closer to annoying than challenging in that regard.

Thoughts on Gameplay
There’s a lot left on the table and the most unfortunate thing is that the characters are extremely unremarkable once you see all the good stuff the different enemy types can do. It wouldn’t hurt the game to have some more distinct features for each character.
The game is at its strongest in the co-op but fails to deliver the same fun for solo players and turns it more towards a frustrating experience. This is due to lacking characters and frequent enemy composition combining shooters/dashers and goons. While the guard mechanic is strong, it’s in no way enough to offset it.
Offering alternative story paths is a superb idea and something I’d like to see more utilized within the genre. 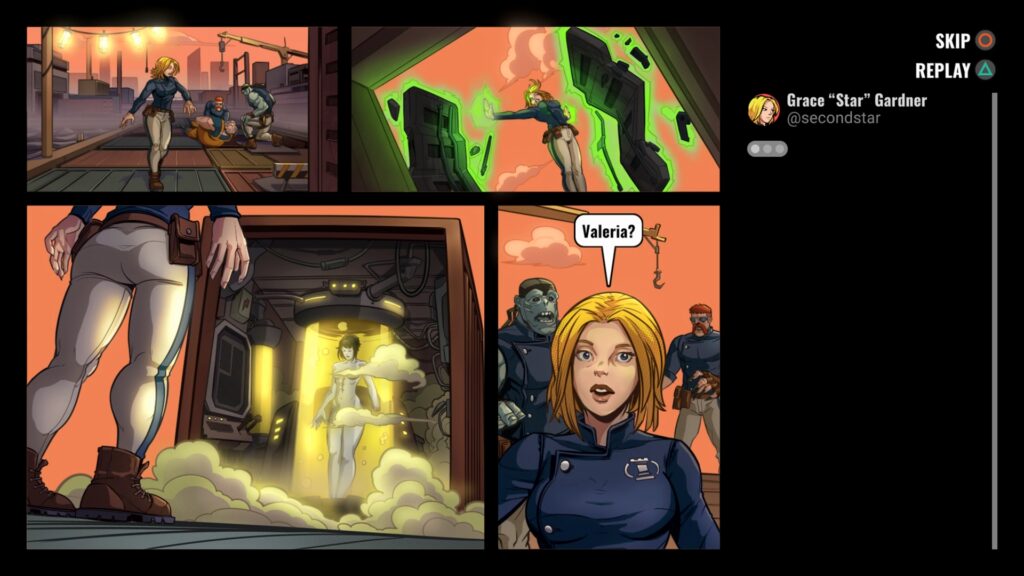 If there’s one thing that Mayhem Brawler nails, it’s the visuals and presentation. The characters and enemy sprites look great for what it’s worth with stable quality throughout the game.
Emulating a comic is a great idea. The art looks gorgeous and works fantastic for what it tries to do. Having Stars’ pseudo social media displayed on the right adds a little bit of nice world-building into it. It’s only a little but does a good job.

There’s nothing bad to mention about the audio either. The voice work is solid and fits the characters well in the story bits. Attacks and hits have some good oomph to them and the music is good enough but nothing memorable.

Is Mayhem Brawler a bad game? Definitely not. Is it a good game? That’s going to vary depending on the player. Especially whether you play it in coop or solo. There are some nice ideas but bogged down by some of the Gameplay decisions.
It’s a serviceable first attempt with the potential of the sequel becoming a very good game but as it is right now with the heavy competition in the genre I’ll have to give it a Save for Later despite the lower pricing of 19.99€ (Consoles) or 16.79€ (Steam).