Very recently in my life, I discovered I have some form of hypermobility issue. My joints all over my body don’t stay in place properly, and slide in ways they shouldn’t, making my muscles swell. This happens especially bad in joints that experience a lot of activity, like knees, shoulders, and each of my fingers.

This is relevant for gaming, as you would imagine, because I’ve spent my entire life wondering why my hands hurt so bad when I hold certain types of controllers for too long. That said, I don’t go out of my way to play twin-stick shooters. The grip one typically employs when desperately trying to both hit an enemy and dodge projectiles is simply something I’ve typically avoided.
That said, however, I enjoyed my time with Trigger Witch, though this begs admission; I played the game on easy. Difficulty can be customized, which means that you take less damage and do more damage the easier you make things for yourself. 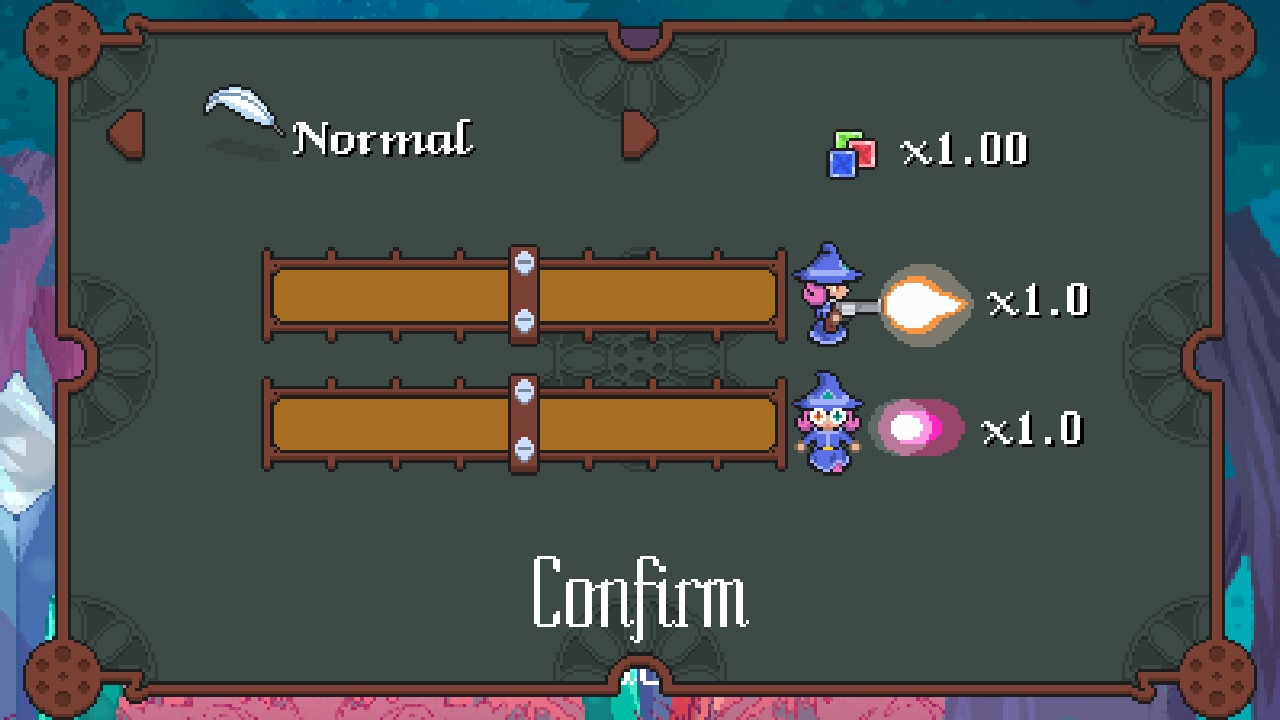 Thank goodness for that difficulty slider and accessibility, or I may have missed out on a decently fun pixel romp. 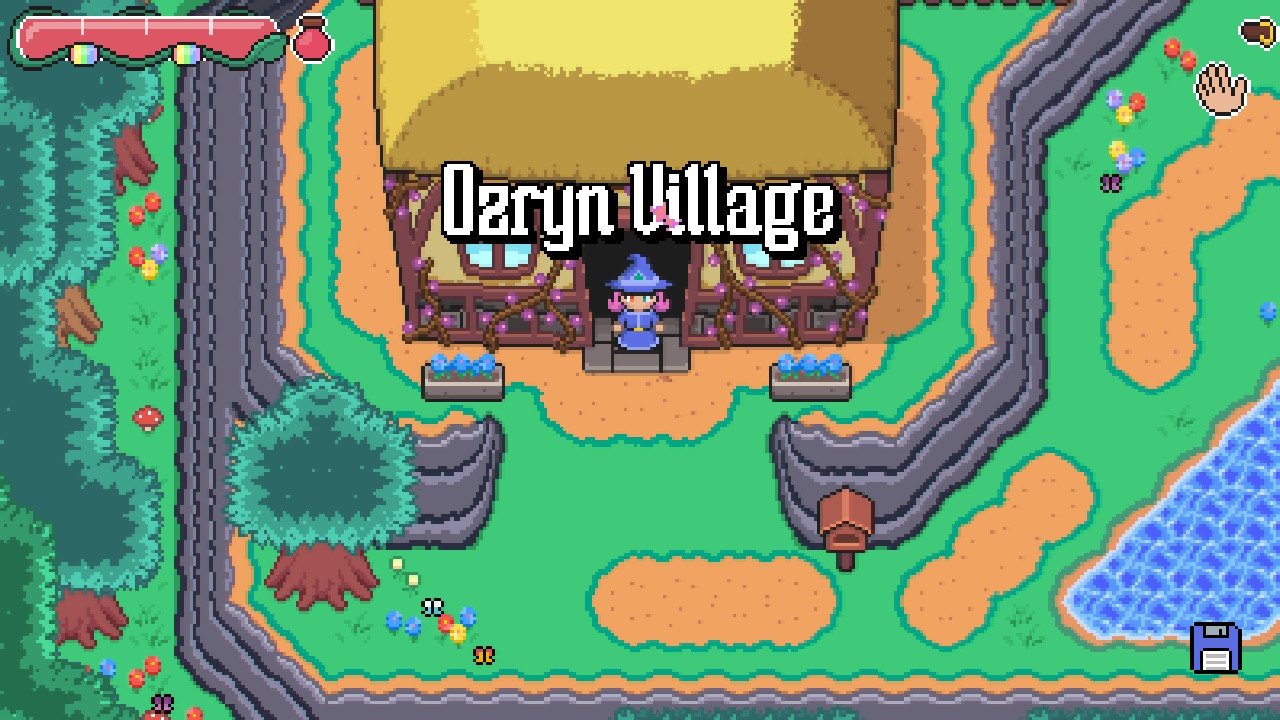 Our heroine begins a bright, sunshiny day by being awoken by her rather sharp-tongued mother in the village of Ozryn. We play as Colette, a young, (apparently) talented witch dreaming to get into The Clip. There’s a trial happening today, and as we step outside and meet two friends we learn more about the world itself. Colette’s best friends are named Remi and Shelly, both of who are decently two-dimensional but still fun. Remi is jealous- she has a bit of a rivalry with Colette, and is determined to do better than her in The Stock Gauntlet (the official name for our trial). Shelly is sweet, a bit shy, and seems to hesitate when thinking about the stress of the Gauntlet and how she may underperform…and she also has pointed ears and red eyes. Good thing that doesn’t matter!

Colette, as the hero (with heterochromia) is determined, and the Ordnance Rift our trio visits before the Stock Gauntlet deems her worth to practice ballisticism, this world’s combat option. We are given a Hand Cannon, and then sent on our way.
Thus begins the trial. Colette’s mother is an important figure within The Clip, known as the Grand Receiver, and is the one conducting The Stock Gauntlet. This serves as our tutorial, and once we best each room’s challenges we are given an option to teleport back to our hub town. We are then sent on our way to find ingredients after a mysterious, dark-robed man appears out of the same rift we visited earlier…and then passes through the massive Norsou partition, meant to keep the town safe from Goblins. Once you collect everything, the partition opens, and then there are further dungeons to explore and things- and people- to discover. 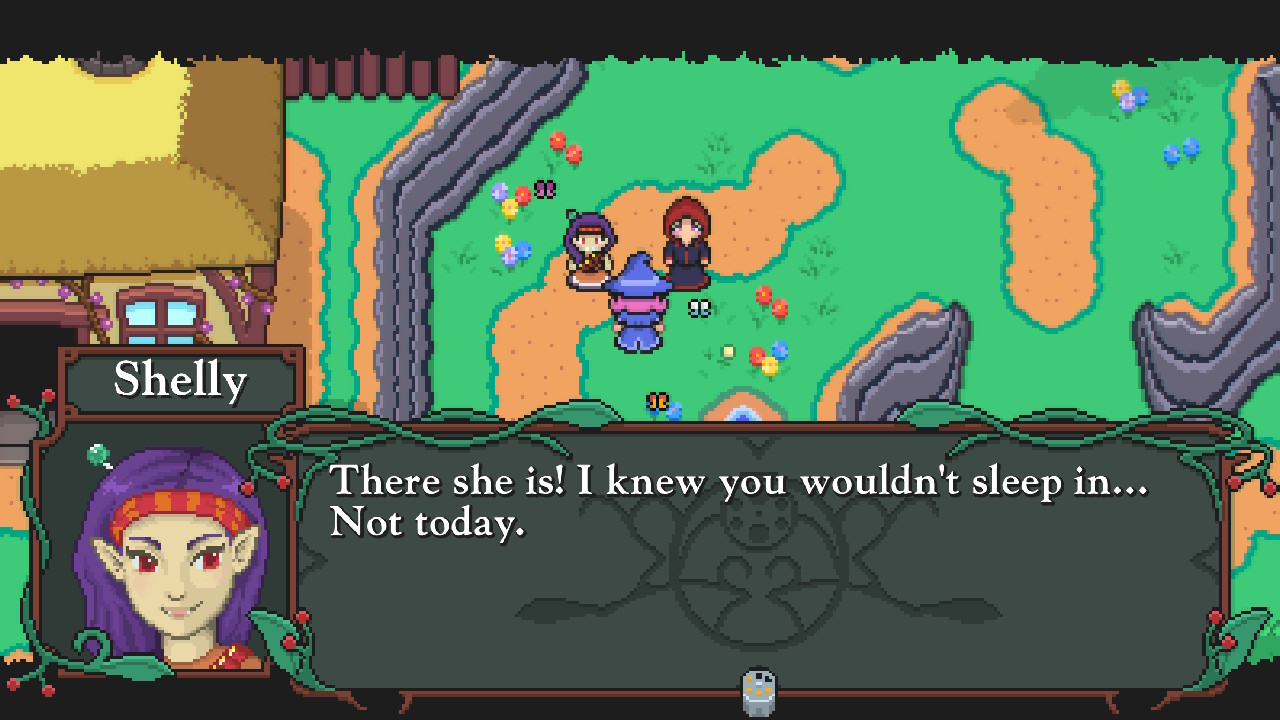 There are multiple instances where world-building becomes apparent, and the realm of Evertonia coughs up its secrets. Real magic – witches shooting fire, potion-brewing, charms- used to be more prevalent until technology began to rule. Ballisticism is considered the main form of practice in the area we hail from, but that doesn’t mean the magical creatures have forgotten what people used to do. Magic in the world once controlled by witches is now free, and has an immediate effect on the tangible world around it. Imps are aggressive, Goblins that were once our friends now hate us, other monsters pose threats, and we have to solve the issues by…well, shooting them. That, and doing our best to maybe understand what’s really going on.

Why is there a massive pink forcefield we cannot cross? What is on the other side of it once we craft that potion to pass? What does the dark-robed man want? Is ballisticism the only way to live in this world? Or would going back to the status quo be best for all creatures?

There’s more to play after you delve into three separate dungeons for ingredients, and Collette begins to grow and acknowledge things about the world, and the past choices that were made.

The game is pixelated, harkening back to older games that clearly influenced it. Everything is lovely, bright, and each enemy has a different enough model to be immediately discernible. There are giant orb-like monsters that roll at you, shield creatures that defend other enemies, and even little creatures that look like Minions. Y’know, the yellow guys? They’re pretty fun to shoot. Even when the models don’t differ, there are recolours to signify that it’s a variant monster- either with more health or doing more damage, and so on. 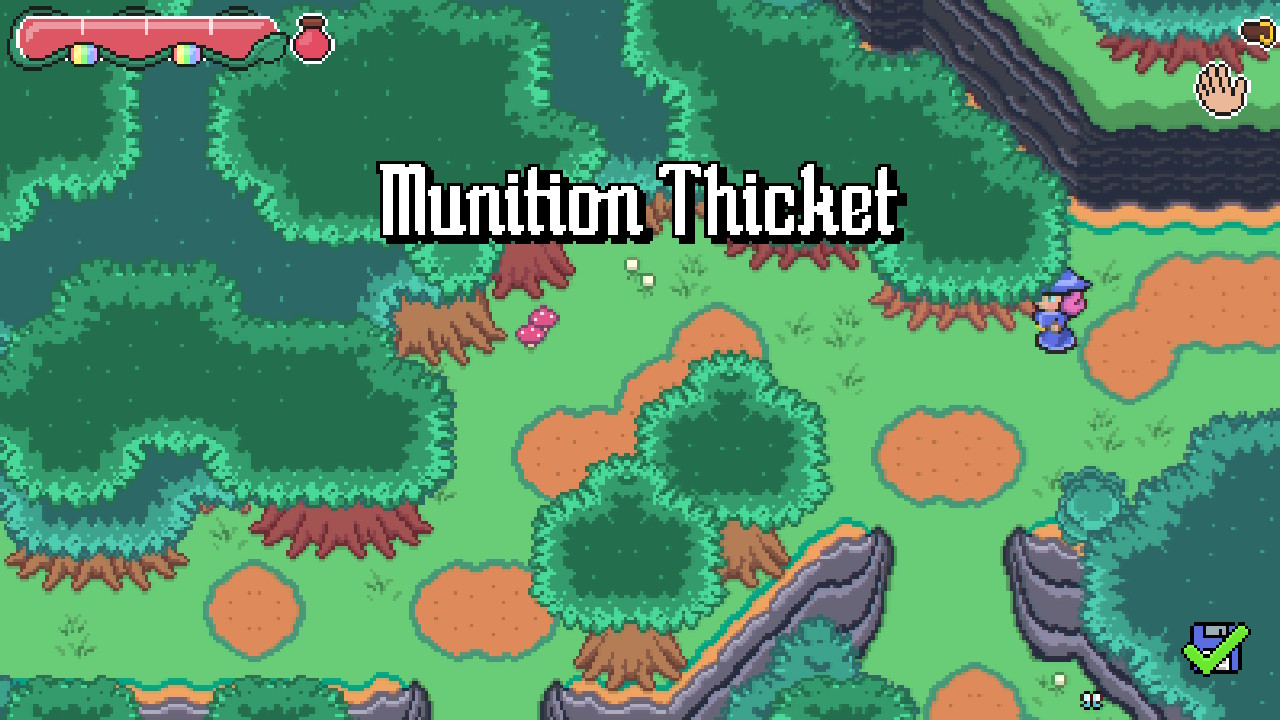 Trigger Witch also has an interesting feature that allows you to hide blood and gore. Normally, when you shoot imps, they leave behind trails of blood, and certain fights can leave the floor covered in all sorts of carnage. If you don’t want that though, you can set the game to piñata mode. Now, I don’t mind blood, but I love the bright colours and silly confetti bits that rain out of enemies, and spent 2/3rds of the game playing this way. While it was really just fun for me, this may be something someone appreciates!

Like I said earlier, twin stick shooter-style games are not the most comfortable for me. The saving grace for Trigger Witch are the accessibility options, which made me have to hold my hands in a goblin-grip a lot less.

Controls are somewhat standard- though please note that I did play this game on the switch. You move your character with the left stick and move your aim- which you can toggle a sight line on and off for- with the right. Right rigger is to fire, right bumper is to reload, left trigger lets you dash, and the left bumper allows you to swap through weapons. You have the ability to heal on a moment’s notice with x, and you can restore your health potion by killing more enemies. 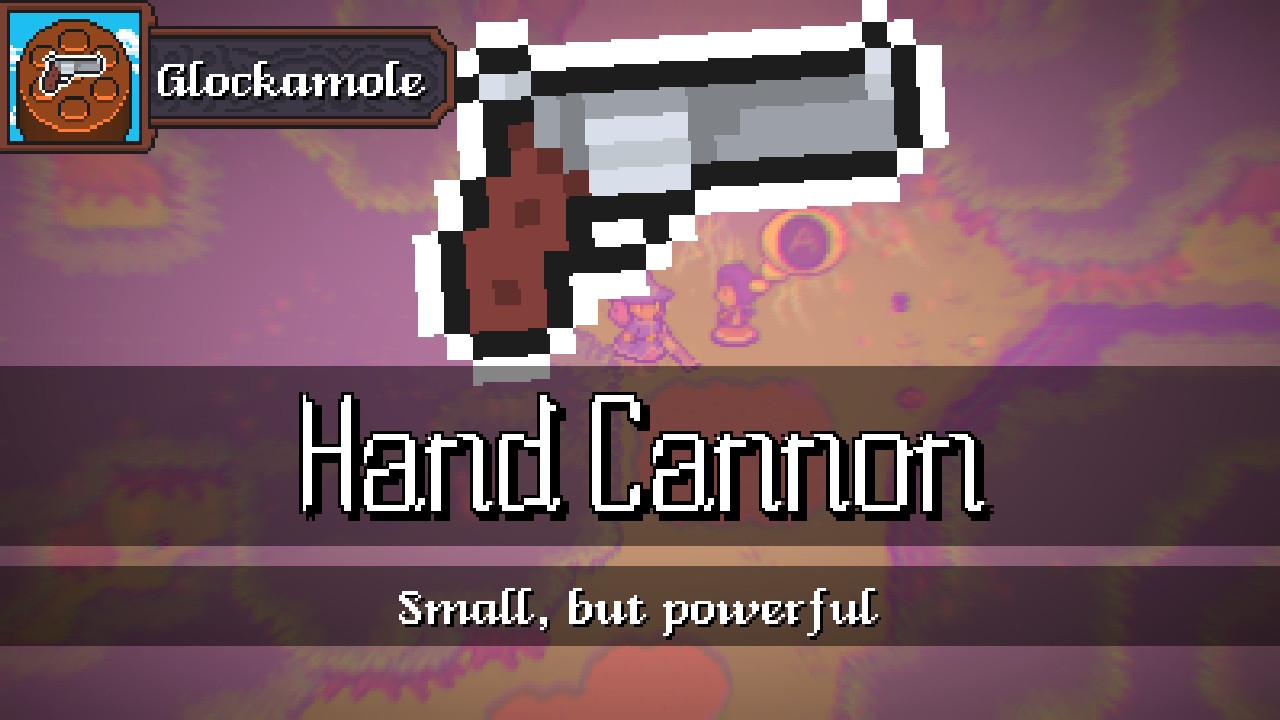 Note that there is an ammo feature in this game! The hand cannon – or default weapon- can reload automatically when you press the right bumper. Every other gun has an ammo limit however, before you automatically switch to the hand cannon and have to wait for your other weapons to reload. With currency you get from killing monsters (gems), you can upgrade each gun at a shop, provided you can find one of the upgrade parts scattered about the world and found in chests. If you tend to explore, then this shouldn’t be too difficult!

There are dungeons, and you go through them mostly to find and gather things. There are teleporters available as you progress that also act as respawn points, and that allow you to quickly move between sections of each dungeon. Colette moves from room to room, shooting switches to open doors, killing monsters, and looking for keys and new weapons to aid us in our puzzle progression. There are bosses at the end of each as well, and some of these prove genuinely tricky if you struggle with twin-stick style games like I do! 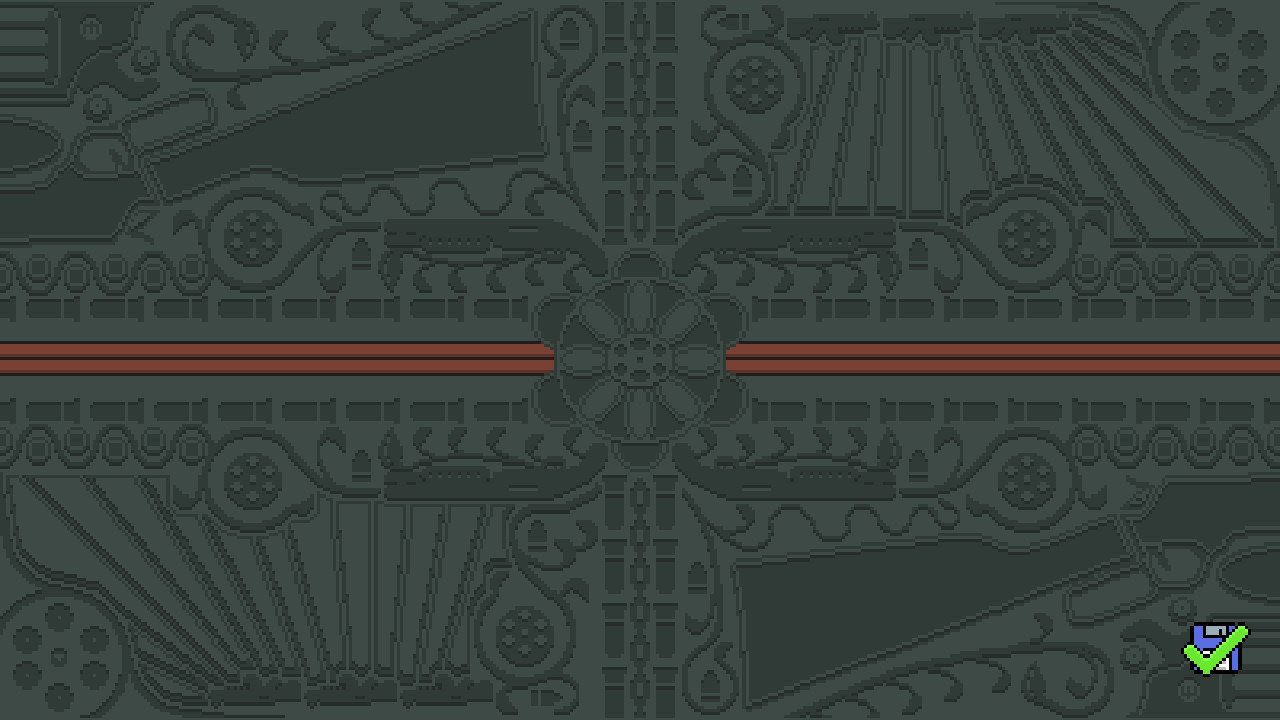 While the options don’t seem to change too much, the main character does have two basic dialogue choices during conversation with some NPC’s. We can be cocky or curious, humble or boastful, and so on. It helps add an extra degree of flavour and customization to the game, that otherwise is mostly about shooting a bunch of imps into confetti.

Two more important notes that are unrelated: the game saves each room you enter, and this led to occasional lag for me on the Switch when there were many enemies on the screen. It wasn’t unplayable by any means, but I got hit once or twice in a way that wasn’t really replicable elsewhere.

This game also lets you pet the dog in your village. Very important stuff. 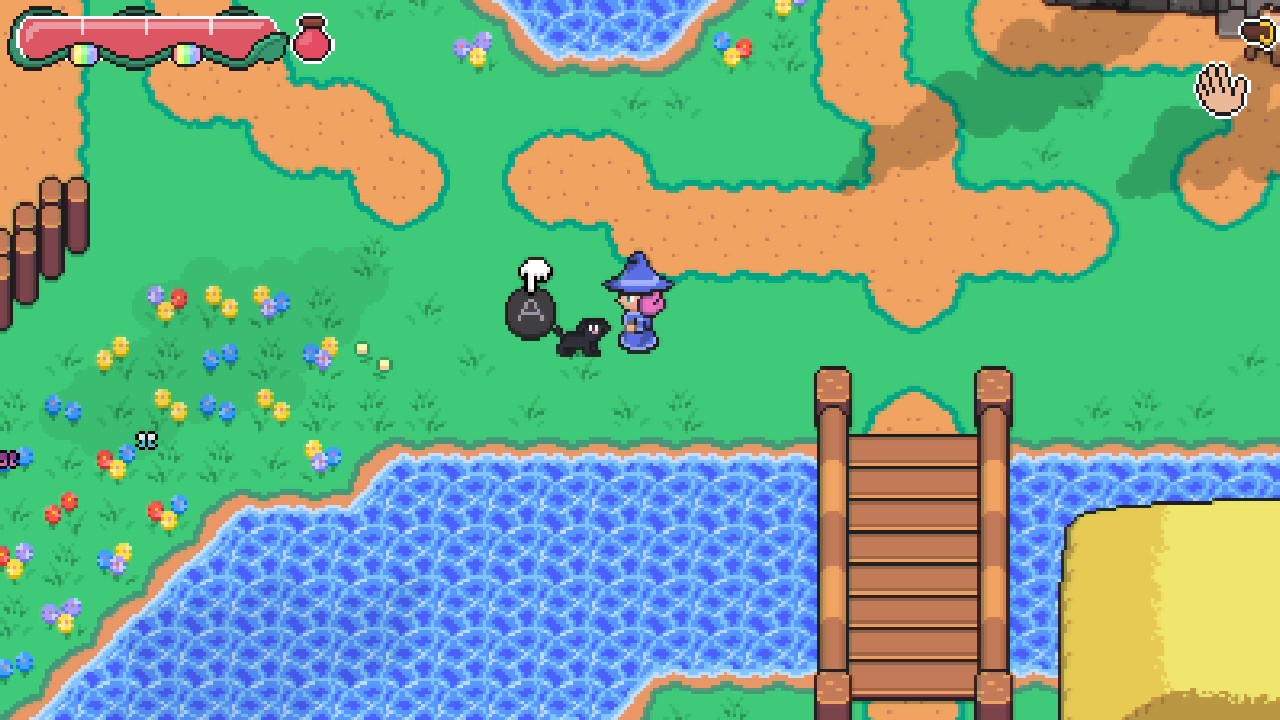 I had a lot of fun with Trigger Witch. That’s usually my standard for games anyway- they don’t have to be story-rich, or thought-evoking, or make me cry- I just want to have fun with them. The story in Trigger Witch did genuinely intrigue me though, and I found myself wanting to know if Colette was going to change her view points and her seemingly-unshakeable dedication to the Clip and the ways of ballisticism as she learned more about the world. While I found the dungeons going fairly fast once I was in them and tearing through, there are a number of secrets available to find and maps available to help guide you to them. This game helped reinvigorate my faith in fun twin-stick shooters, especially since they’re normally closed off to me to play on a regular basis due to accessibility issues. Consider it if you enjoy pixelated games that are decently light-hearted, with plenty of jokes.