Five friends take a relaxing trip to an island, but instead find themselves in the middle of strange occurrences that make them question everything they see and hear.

‘Oxenfree’ is a story-focused sidescrolling adventure game that puts a lot of emphasis on mystery and tension building. This is accompanied by elements of point and click and also branching narrative where our choices influence the outcomes. 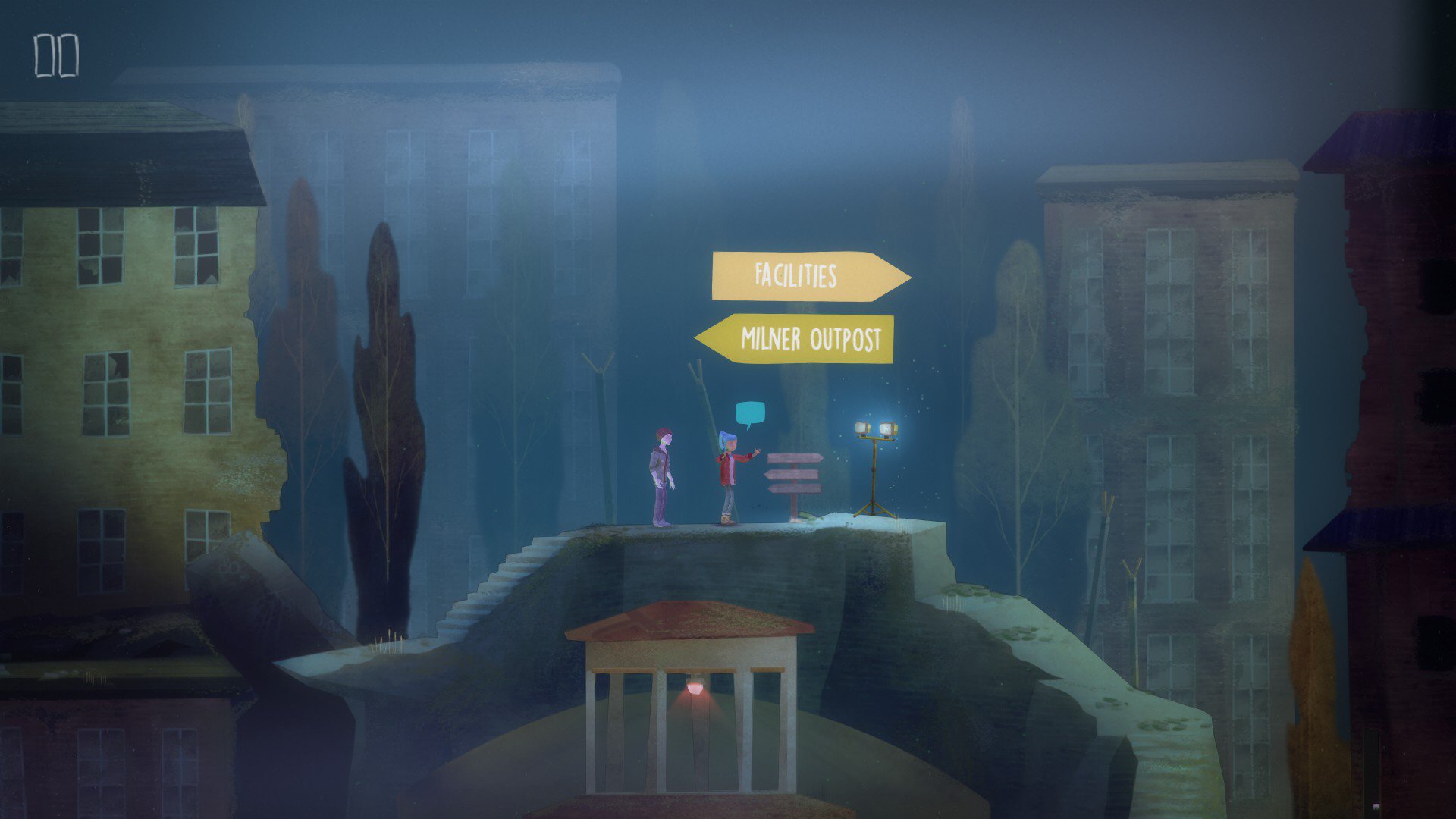 All of the game’s events take place on an island and follow a group of 5 friends who have become a part of unexplainable events. Shortly after the friends have arrived on the island and delved into the caves, they started seeing and hearing strange things and have found themselves separated on different parts of the island. Their goal is then to come back together again and attempt to understand what is really going on, whilst making sure they all survive and make it off the island with their minds and sanity intact.

There is a very well-executed mystery vibe from early parts of the game that lasts for the entire duration of it. We’d find ourselves asking questions and wondering what exactly is going on. 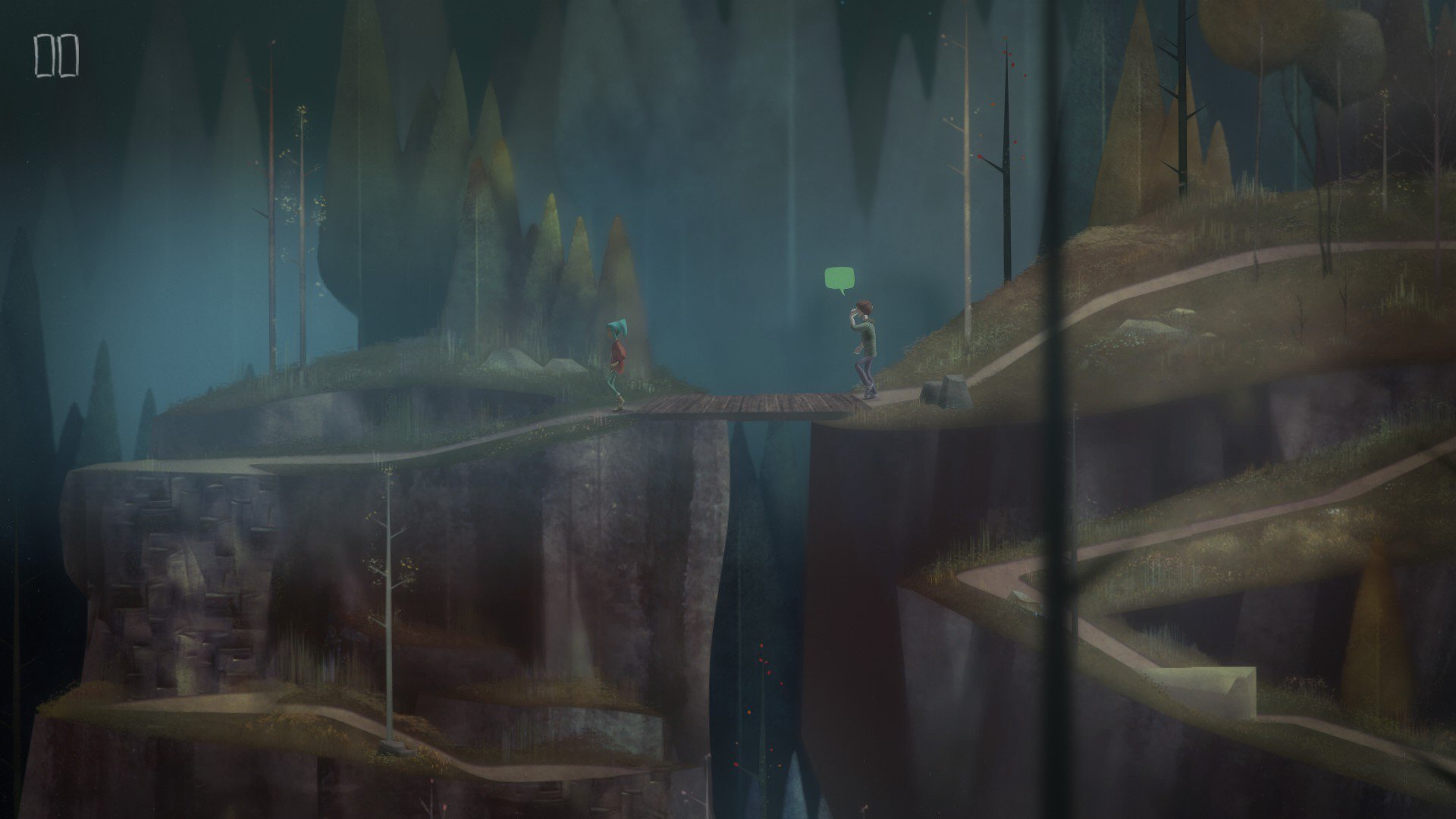 The game uses very interesting story-telling methods. While all the dialogues are going on, we have the full control of our character, and most of the conversations happen during our exploration in the maps. The characters always talk about interesting events that happened to them or simply voicing their opinions on something. All these conversations not only get us to learn more about the island, but also about the characters themselves.

Quite frequently during conversations we are given dialogue choices to make. Some of those choices barely change anything and mainly just influence the conversation, while others have longer-reaching effects that influence events of the game or play a part in developing trust between the characters. My only complaint about the way the game has executed its dialogues is that the dialogue choices are timed and disappear pretty quickly. You have to be a fairly fast reader to read through all of them, and once you’ve done that, there’s no time at all to decide which of those choices you want to pick, so you have to pick these choices very quickly without much thinking. It wasn’t much of a problem for me personally, but I think for slower readers this could be problematic. 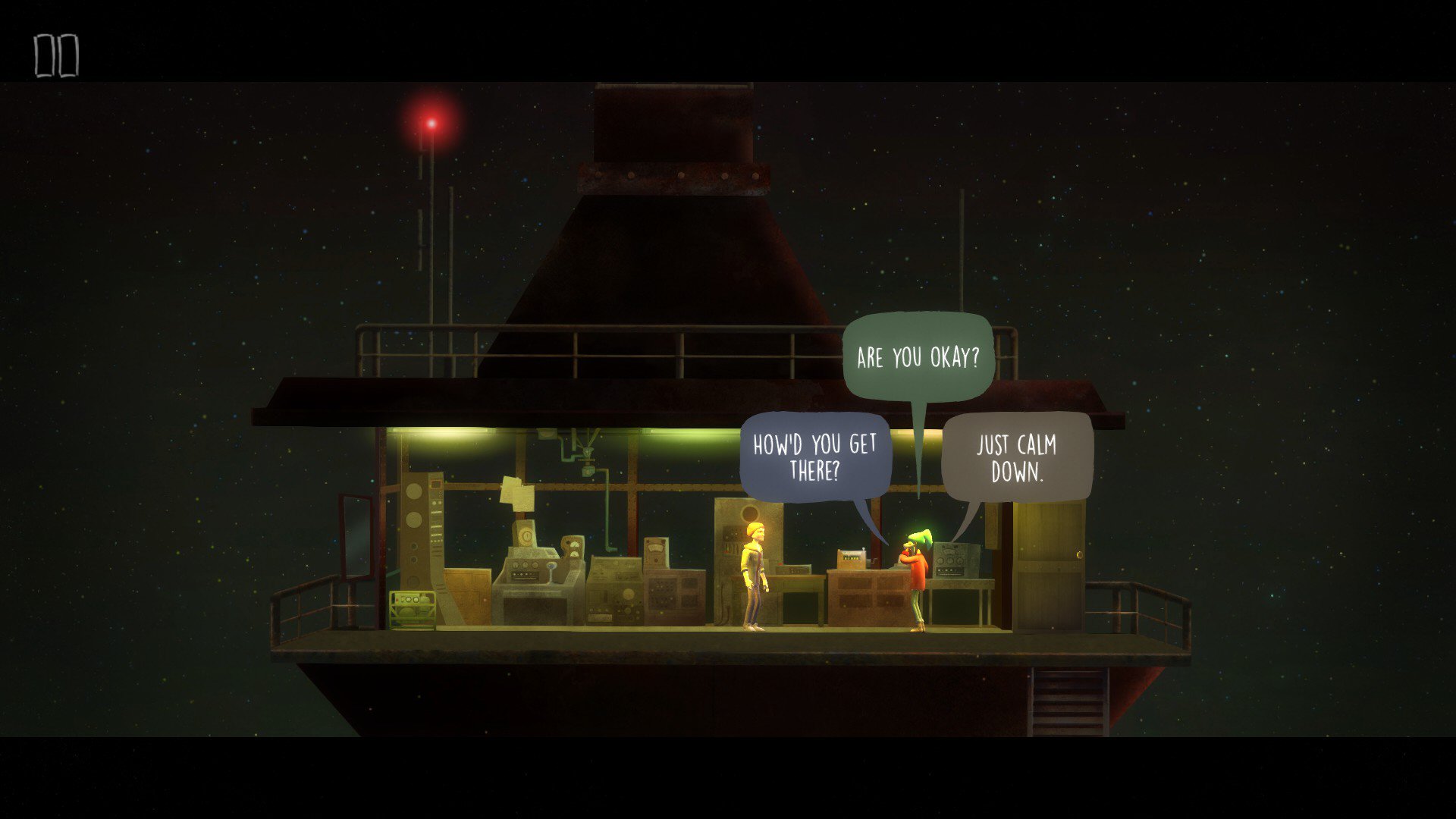 Aside from making choices during dialogues and scenes, the game has point and click elements where we interact with the environment and solve simple puzzles in order to make progress. Some of those require merely interaction with parts of the environment in a certain order, while others also require us to use the radio that’s in our character’s possession. The radio is quite a big part of the gameplay and the game’s lore. We can cycle through available frequencies, and once we’ve found the right one, that frequency can have an effect on a part of the environment, often in a rather supernatural way, creating arcs of energy and the like, and at times unlocking doors or getting other mechanisms to work. 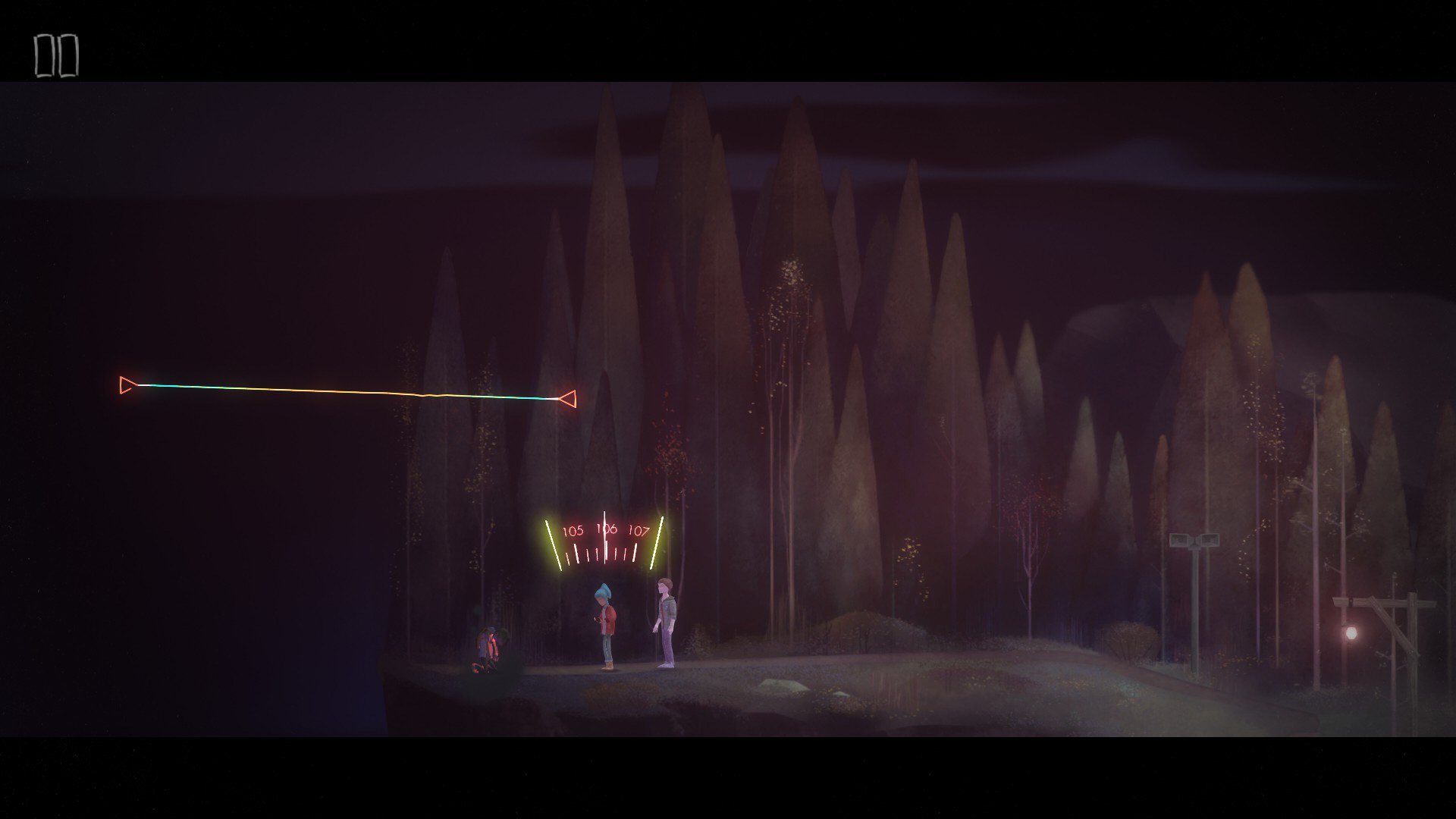 There are no enemies to fight in the game and no boss fights, stealth sections, or traps that can kill us. Generally, the gameplay elements are pretty casual and almost anyone should be able to play this game and witness its interesting method of storytelling and building of the suspense.

The visual style is quite simplistic and cartoony, while generally going for bleaker colours when exploring the environments of the island. I think this helped to make us feel a sense of isolation as the island starts to feel devoid of life of any sort aside from our 5 characters.

The game plays as a 2D sidescroller but which cleverly has its maps designed along the vertical plane as well, often requiring us to climb up and down. There’s no platforming really, although some sections may look like it. However, all jumps and similar sequences are done with a press of a button. The character walking speed may feel a tad slow in places though, especially when backtracking, although most times the characters talk to each other while we walk, so something is always going on. 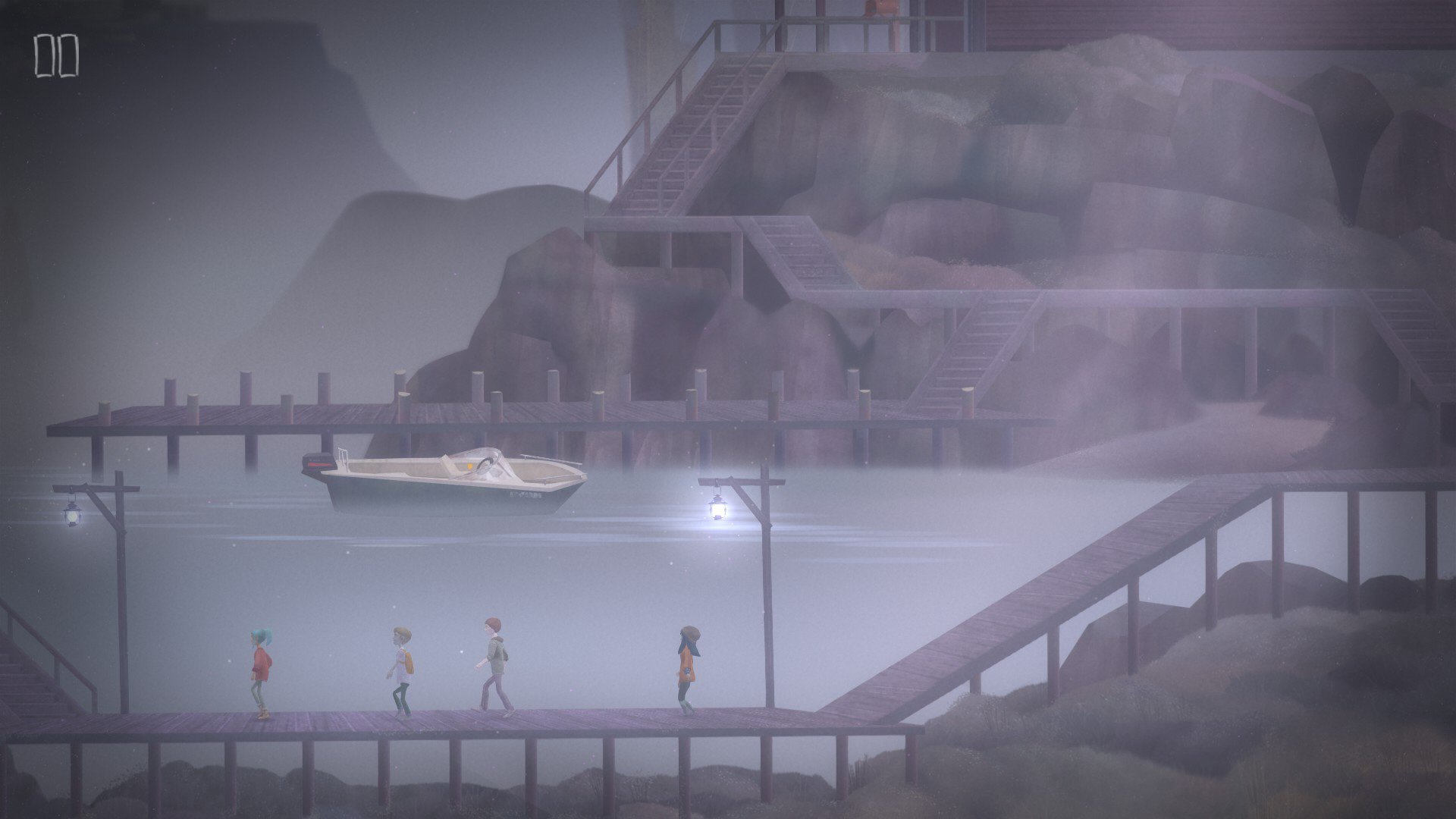 Music provides an interesting contribution to the overall presentation. It manages to create tension very well, and in the more unusual scenes with strange happenings, it gets distorted and slowed down or sped up to indicate that something is wrong with space and time. I quite enjoyed such use of music to convey the peculiar events of the game.

The voice acting by all characters is done very well and there are quite many lines of dialogue in the game as there are many conversations to be had and many dialogue choices, all of which alter the conversation.

‘Oxenfree’ is generally a nice mystery adventure game with a unique execution that gives it its own personality. Its gameplay elements are casual so that they provide some player agency but without taking too much attention away from the story and the characters involved. Its use of visual effects and music is quite clever when executing scenes with strange events, creating a nice atmosphere of mystery and tension. The game is pretty short and can be completed within about 4 hours, but it’s quite replayable due to different choices that it offers with different outcomes on the endings.