REVIEW: Where The Heart Leads (PS4)

I’m at my Whit’s end with you

Where The Heart Leads starts on a dark and stormy night set on a farm. Well, more like it seems like a sever thunderstorm was making it’s way to a farm. As loud thunder roars across the land and a nearby tree breaks and falls, everyone in the nice family home wakes up and a dog manages to push past someone that was just checking outside. We soon learn that the dog is named Casey and her owners are a married couple named Rene and Whit, who also has two kids Kate and Alex. You play as Whit and as you run to where your family went to, the camera pans to real a huge sinkhole has formed in the middle of the property. And the edges seem to be still crumbling. Luckily your wife nor your kids have fallen in, but your dog somehow has. So to save her, you decide to have you lowered in a bathtub. However, while the dog makes it, you suddenly plummet to damn near the center of the Earth based on how long the fall was. Seemingly unscathed, Whit tries to find a way out but soon loses himself in his past memories. 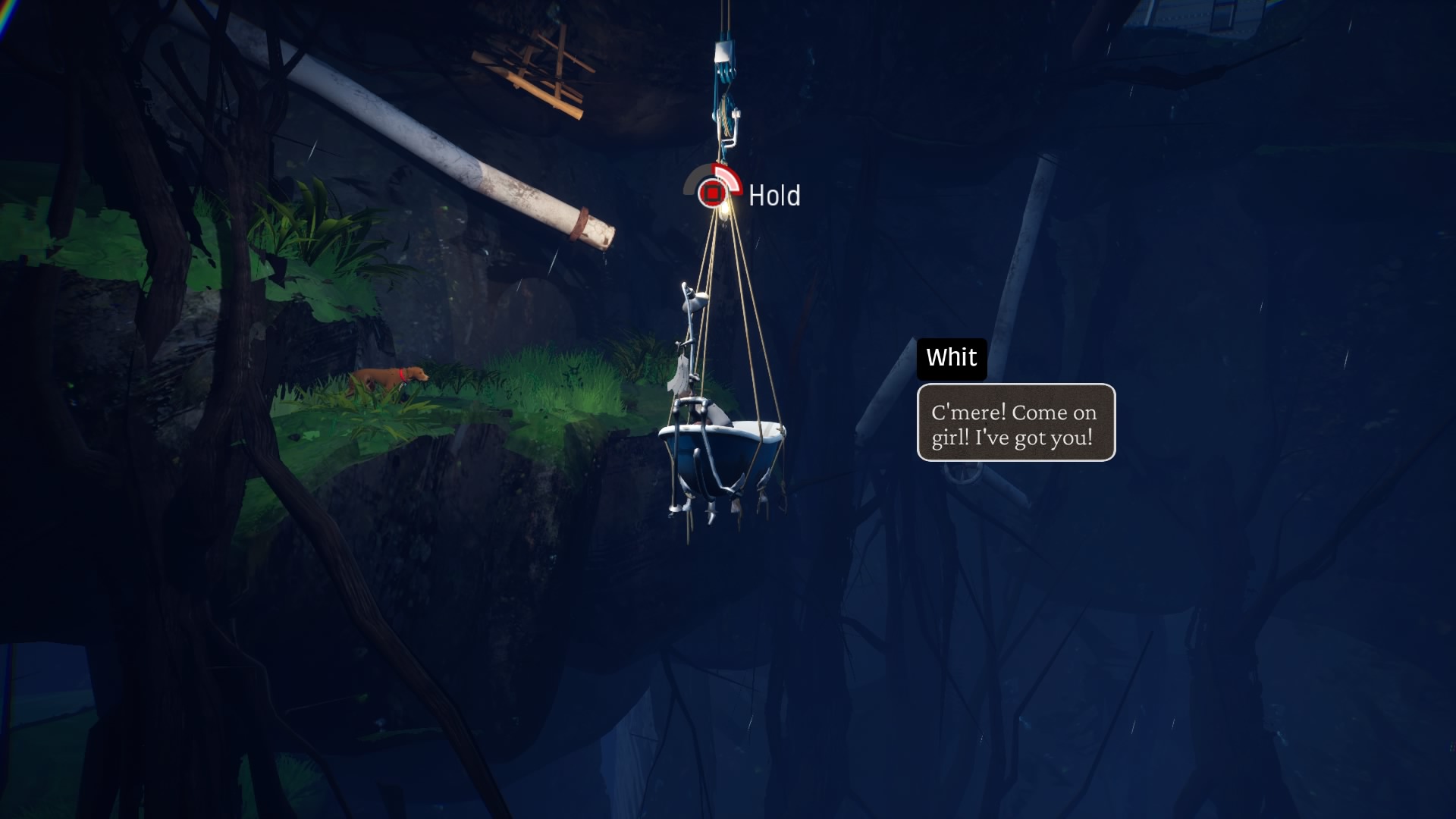 I was actually quite surprised there wasn’t more on spending time in the sinkhole, but what was probably happening to Whit did dawn on me maybe halfway through the chapter Priorities and then definitely thought so later on. While I’m still a bit confused, I did notice the little winks to it as the end drew nearer and remember the little foreshadowing at the beginning.

Where The Heart Leads takes an interesting and unique approach that I haven’t heard about another game taking, both in the choices and how it handled flashing backwards despite knowing an aspect that happens in their future. You play as Whit throughout his years when he’s a teenager still on his family’s farm, his adult years where he married Rene and have kids (duh), and finally in his older years. With each of them having sub-chapters to break up significant times during those chapters of his life. Throughout each chapter, it’ll be set in a location where you’ll be running around in as you talk with others and get things to do, which you can pretty much do it in any order as long as you complete everything. You’ll also get and find documents, be it letters or diary entries or posters, so you get more insight on Whit or those around him. 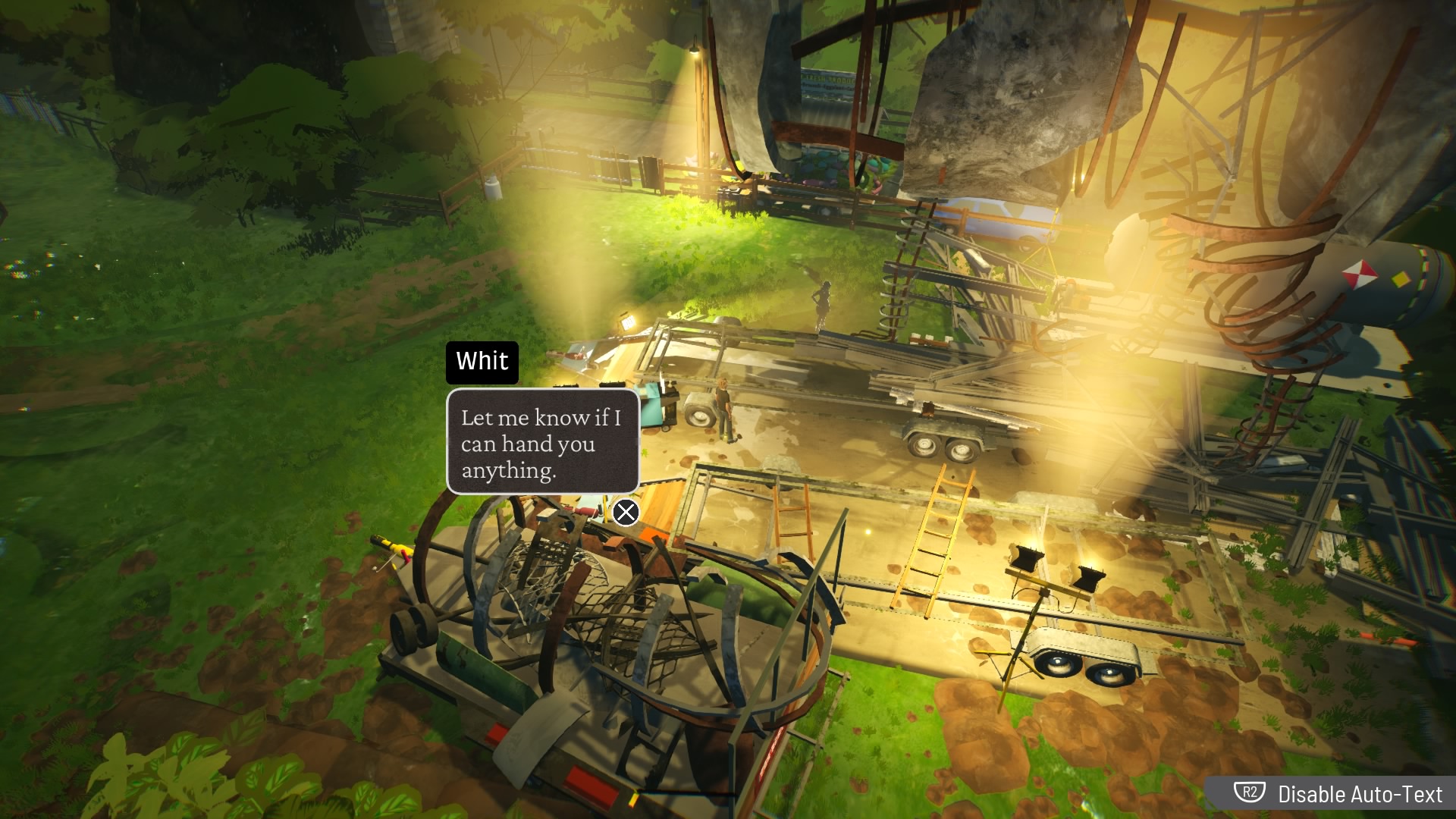 Of course, you’ll be making countless choices, some more meaningful and impactful than others. There are the standard choices where nothing big changes, but you do get a little notice for choices that will have the most impact. However, you won’t know when these choices will come in, and you won’t be able to save before choosing, which made me take every choice seriously and think longer on certain hard choices. You will then see what these choices ended up influencing Whit and those around him either sometime in the same sub-chapter or even years later. What you decide to pursue or how you treat others or how you decide to deal with hurdles may also influence your family members in unexpected ways. I even found out that the order you do your tasks in may also change things up. Like progressing a separate task may end up with you not having help with another. 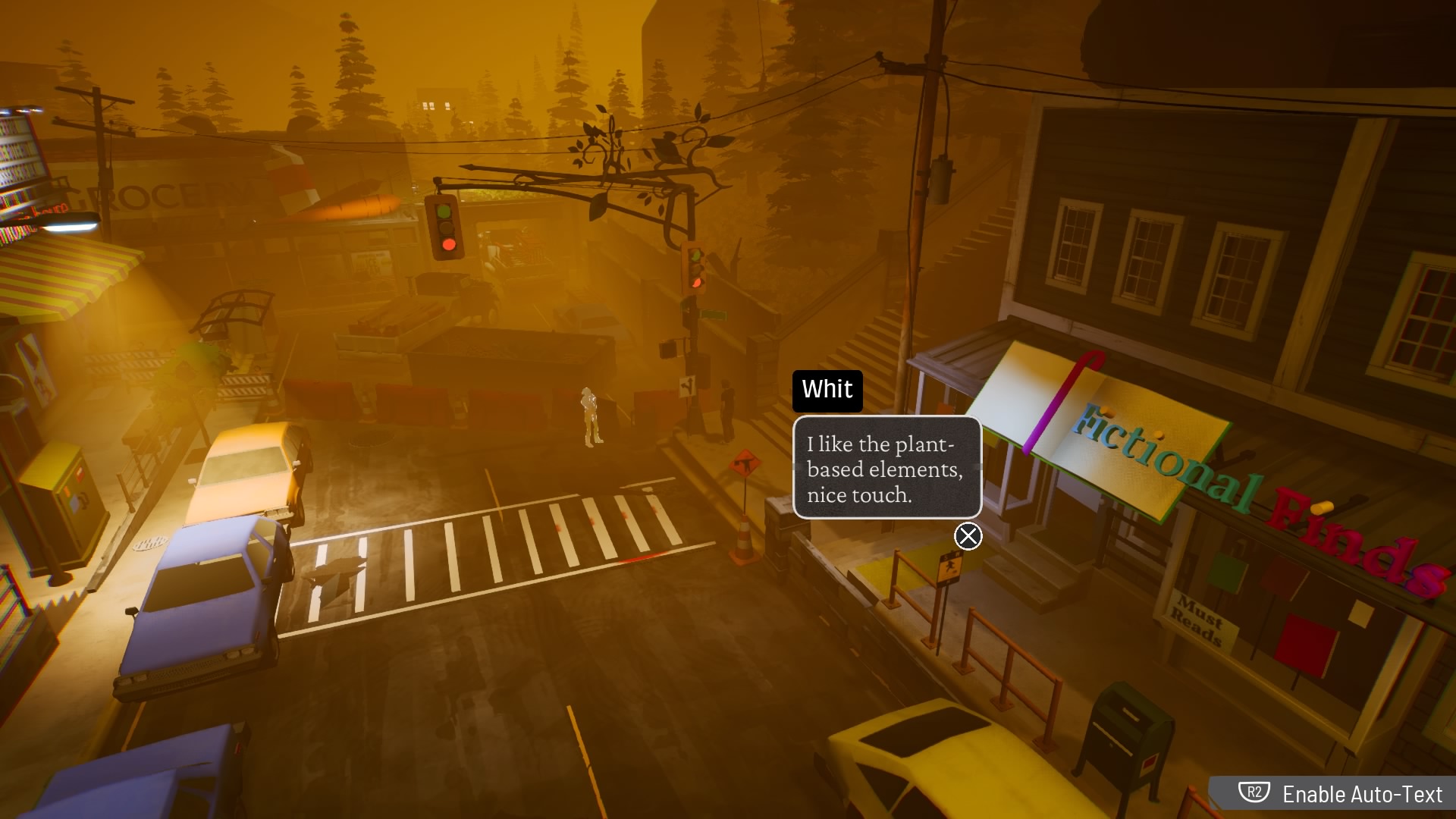 As you continue Whit’s life, you really get the sense of the family dynamic and the dynamic Whit and his family has with others. You can really tell that Whit and Rene love one another from the beginning, and they were so cute together, and there’s no doubt that they ended up together. And while you already know you do marry her and quickly have two kids, the question soon turns to what happened afterwards. You also have the tense relationship Whit and his brother Sege have with their father, but you can tell that their father wants the best for his wife. And for me, Whit was someone that just gets so annoyed at Sege (like, you need to make simple, commercial stuff to make the crazy stuff you want to do), but at the end of the day he loves his brother, supportive of him pursuing art, and wants to help him when he needs it. Whit also was just supportive overall, trying to give the best advice and being there for his kids, but also doesn’t shy away from things that they don’t want to hear. I really got sucked into Whit’s life and wanted the best for him and his family. 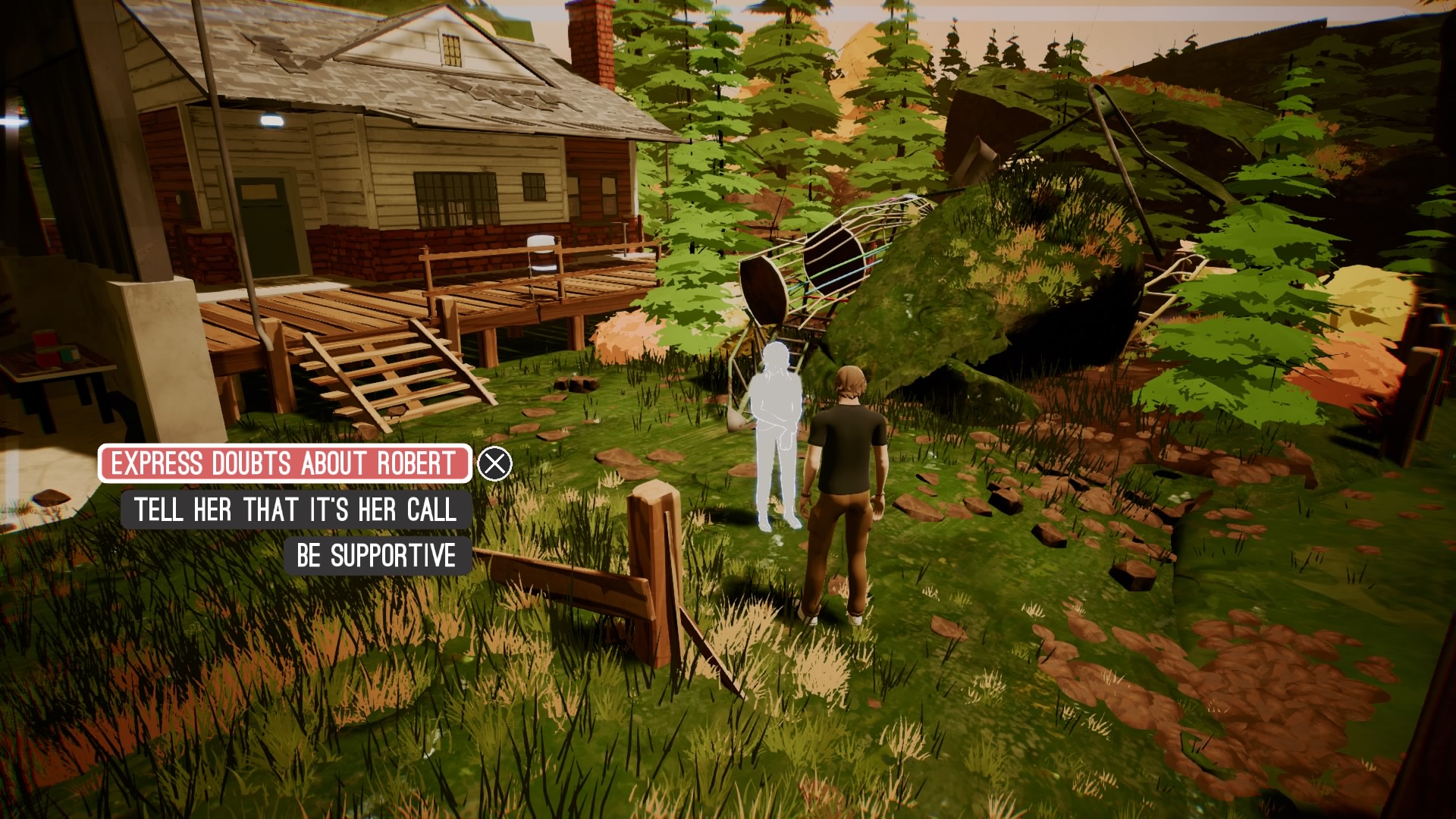 While I was playing, I did wish that this game had some features that it lacked. Like a way to display the text on letters or papers in just a normal font. It’s fine for the letters that are already readable (like the tan, diary-like ones), but I had difficulty reading the cursive ones or ones that had small text. And on that, for the diary-like entries that change as you make more choices, I did wish it pushed you to the first page with changes since you last looked at it. At first I thought it was just a false notification, as some don’t change, but a lot do and it would be helpful to know where you last left off. Also like a to-do list, or whatever feels that fits the best, so you can have a way to remind yourself what you need to do as very often you get a chance to veer off into doing something else (which I very much did). I played it pretty much in one go and I did forget what I was supposed to be doing a couple times, but I can imagine not knowing where you left off and what’s left if you stopped in the middle of a sub-chapter.

Otherwise, I had moments when the text immediately went to the next line (I was on the slowest text speed and dialog you had to continue yourself). I’m also perplexed on why there are two “load save” buttons or if “Memories” is supposed to be something else. The camera does at times get in the way as you’re trying to navigate the area as well. And while I did like having everyone else be like reflective glass, it was hard trying to see who was who just on sight alone. I would also recommend increasing the text size immediately when you start the game. Weirdly enough you can’t go into options before you start your first game and the text here is small. And if you don’t think it’s small during the opening, trust me you will when the camera zooms out. 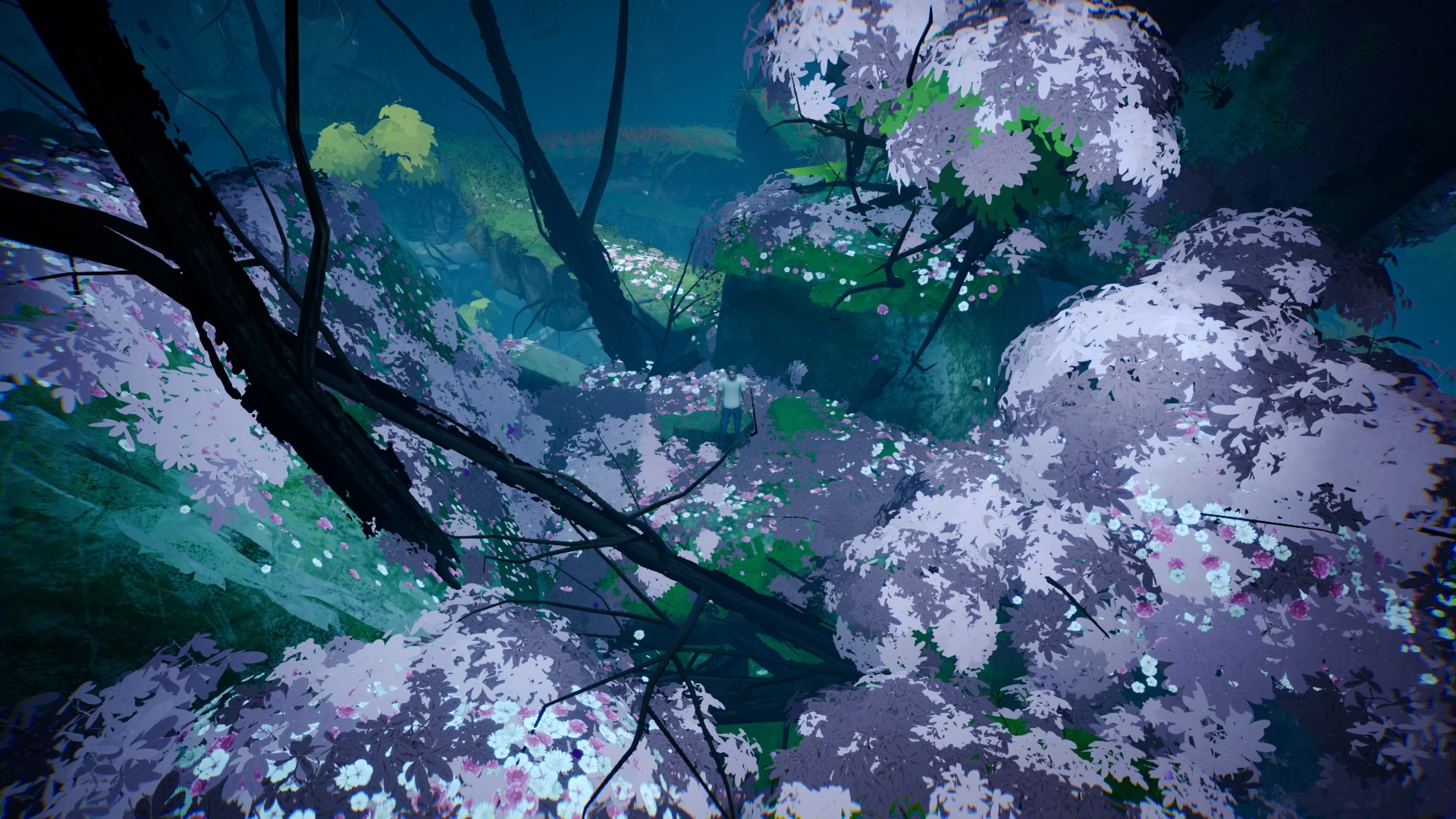 Also I’m pretty sure I got a softlock during the Priorities chapter where I was supposed to find drawings in a cabinet, but I couldn’t find it anywhere. And when I found a playthrough that also picked my choice and had to find it as well, it was in the house where I walked around, I’m guessing, 30 times and then a couple more to make sure I didn’t somehow overlook it. Though, before I did even officially get the task I did activate the dialog for where it would be and Whit did seem like he already had them as he seemingly took them out to look at them. So I restarted it from the beginning of the chapter, which is sad considering that I did get slightly different outcomes between the two, but I didn’t need to find the invisible drawings as Whit had them already. Granted, I could have went for another choice, but I was dedicated to my original choice and I was not budging.

Though, I really did love how the game’s set pieces were put together. I found myself saying how beautiful an area looked multiple times throughout my playthrough, as it almost gives off a soft, watercolor feel. Not to mention the nice detail that each set piece seems like a piece of land that was ripped out of Earth, or fit in that sinkhole from the beginning of the game. Also in a weird way, I like how when you’re picking things up or building stuff that things are picked up/placed down in pieces. 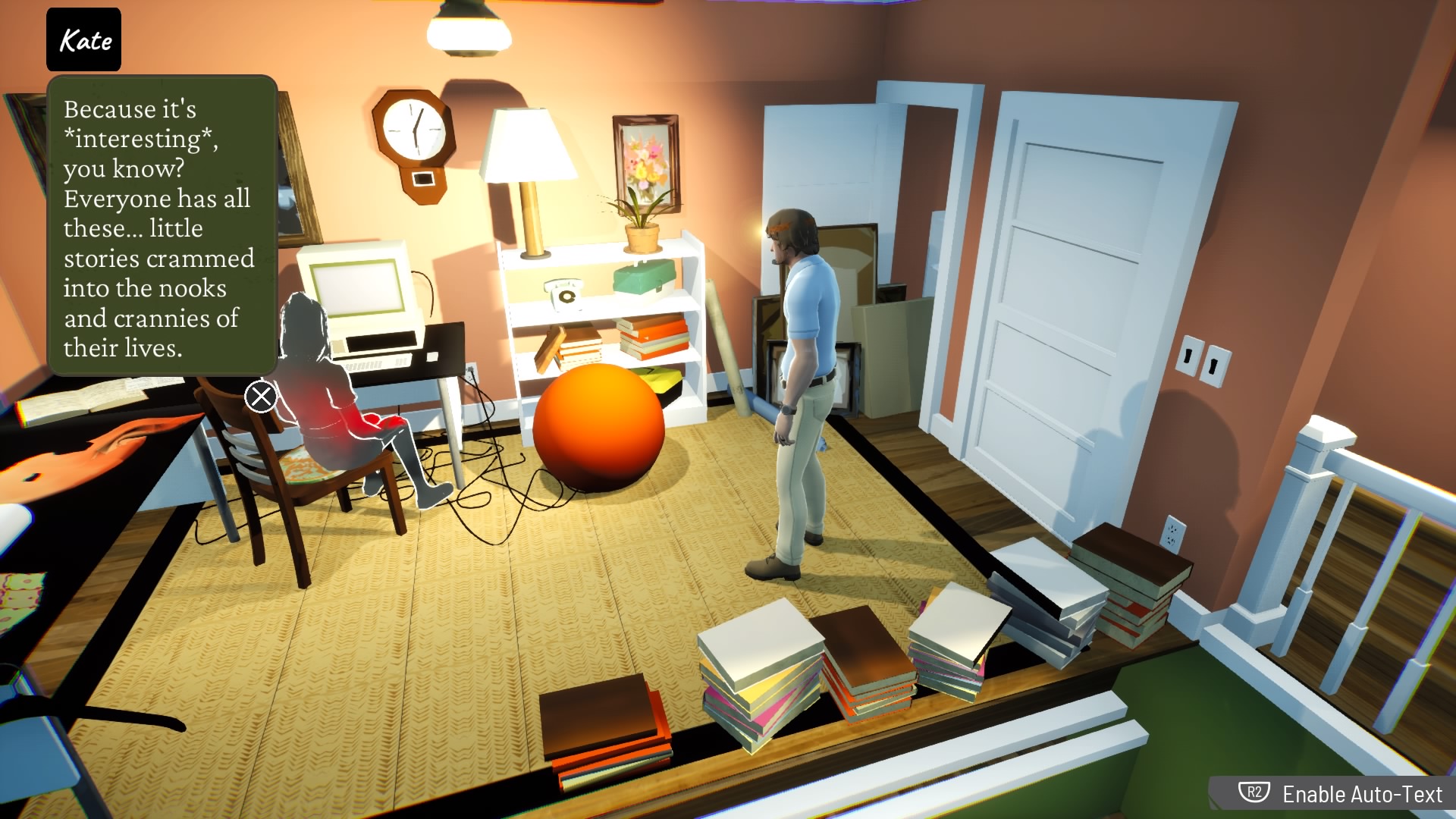 Where The Heart Leads really depends on how well you connect to characters, if you like these choice based games, and if you’re fine with doing some tasks and running through the same area. For me, it was the type of game that I do like and quite enjoy. Not to mention that I’m someone that gets attached to characters easily and quickly. I loved Whit and Rene’s cute relationship, how my choices built Whit and how it influenced his brother Sege or his kids or just those around him. I also did like getting to know the other characters and the area Whit lives in through talking to them or through the various documents you get. There are aspects that are rough or things that are missing that could have made at least my experience a little bit better, but it’s overall a beautiful and thoughtful experience. An experience that may even have you have another moment where you look back at your own choices, wondering what could have happened if didn’t choices were made by you and others.

If this is the type of game that you know you like or sounds like it appeals to you, consider picking this game up.