Dip your toes into the loop

Tales from the Loop is an RPG based on the work by famed artist Simon Stålenhag. In 2017 it ended up winning quite a few award, including the “Best game”, “Best Product” and “Best interior art” ENnie Awards. This is not a review for the main game though, but rather the starter set that was released in 2020. We played through the adventure that comes in the box using the Roll20 module but I also have the physical box. And there’s also a version of the game in PDF form on DriveThruRPG.

Tales from the Loop is an RPG about kids solving mysteries in an 80’s setting with fantastical objects such as robots and even dinosaurs wandering the streets, and huge flying machines can be seen traveling across the sky. But it’s still the 80’s, and for most people life is not all that different from what 80’s really was like. The cold war was still ongoing, Michael Jackson still made hit after hit, and that terrible commercial jingle that you still remember as if it was yesterday was still played. 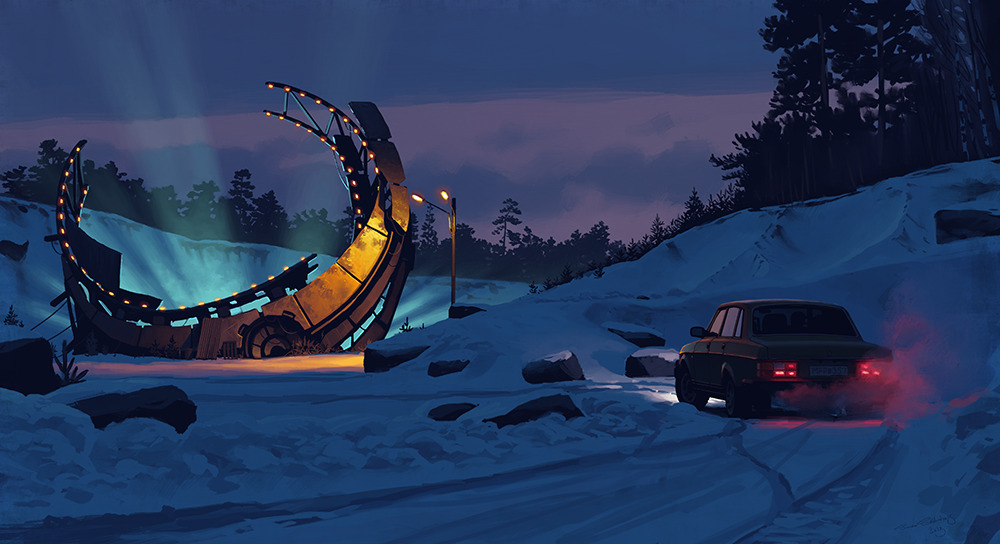 What’s in the Box?

Despite coming in a rather big box (same dimensions as the Alien RPG starter set box) there’s not a whole lot of stuff inside it. There’s a 32 page rulebook that also contains information on the setting, a 16 page starter adventure, five character sheets, a double sided map with one side showing the Swedish location for the game, and the other showing the US location. Finally there are 10 themed dice.

The booklets that both printed on thick good quality paper, and the interior has a lot of art with an excellent print quality. Overall the booklets both look and feel great. The map is similarly great, printed on thick sturdy paper. The 10 themed dice are regular 6-sided dice with the 6 replaced by the symbol for Riksenergi, the organization handling the Swedish loop. The dice do feel good though, with relatively sharp edges, and with all the numbers and the symbol being deeply recessed with spot-on paint application.

Tales from the Loop is pretty much set in our own world, but with a few exceptions. Since the 50’s large flying crafts that uses what’s been known as the “magnetrine effect” to stay airborne can be seen carrying cargo and passengers across the sky, and as of the 70’s autonomous robots have become commonplace. There are also two huge particle accelerators, sister sites, under Boulder City near Las Vegas and under Ekerö Municipality just outside of Stockholm, which has helped propel scientific knowledge forward. But the game is still set in the 80’s, an 80’s that’s very familiar. Gremlins and E.T. were both big hits, A-ha’s slightly mangled English can still be heard in the hit song Take On Me, computer geeks still write rudimentary games on their parent’s C64 and Dungeons & Dragons is still luring kids into the arms of Satan, according to certain parent organizations. And in this world are kids. Regular ordinary kids. Kids who are so used to seeing bipedal robots that they don’t think that’s any weirder than a kid of today seeing someone use a smartphone. 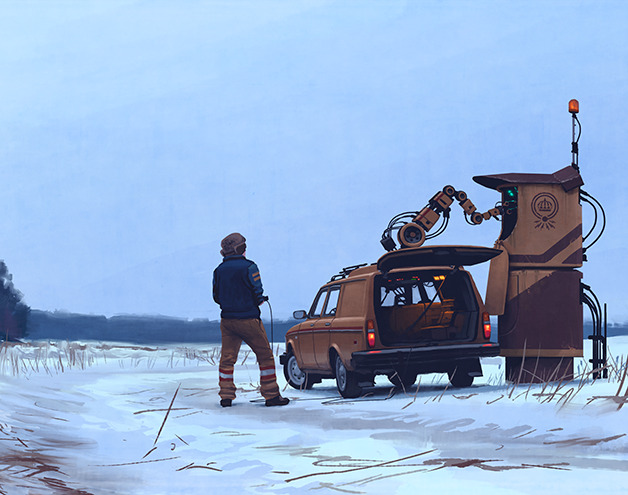 The booklet spends more time explaining what life in the 80’s was, what was popular back then and describing the two locations that the game is set in, Ekerö Municipality, a series of island in Lake Mälaren just outside of Stockholm, and Boulder City in the arid Nevada. And life in these places are really not too different from what they were in real life, other than the fact that people have a giant particle accelerator sitting under their feet, and the phenomena they cause.

Tales from the Loop uses a modified version of the Year Zero Engine, which is the in-house ruleset used by Free League. This is probably its simplest and most straight-forward incarnation yet, and there really are not a whole lot of rules to keep track of. 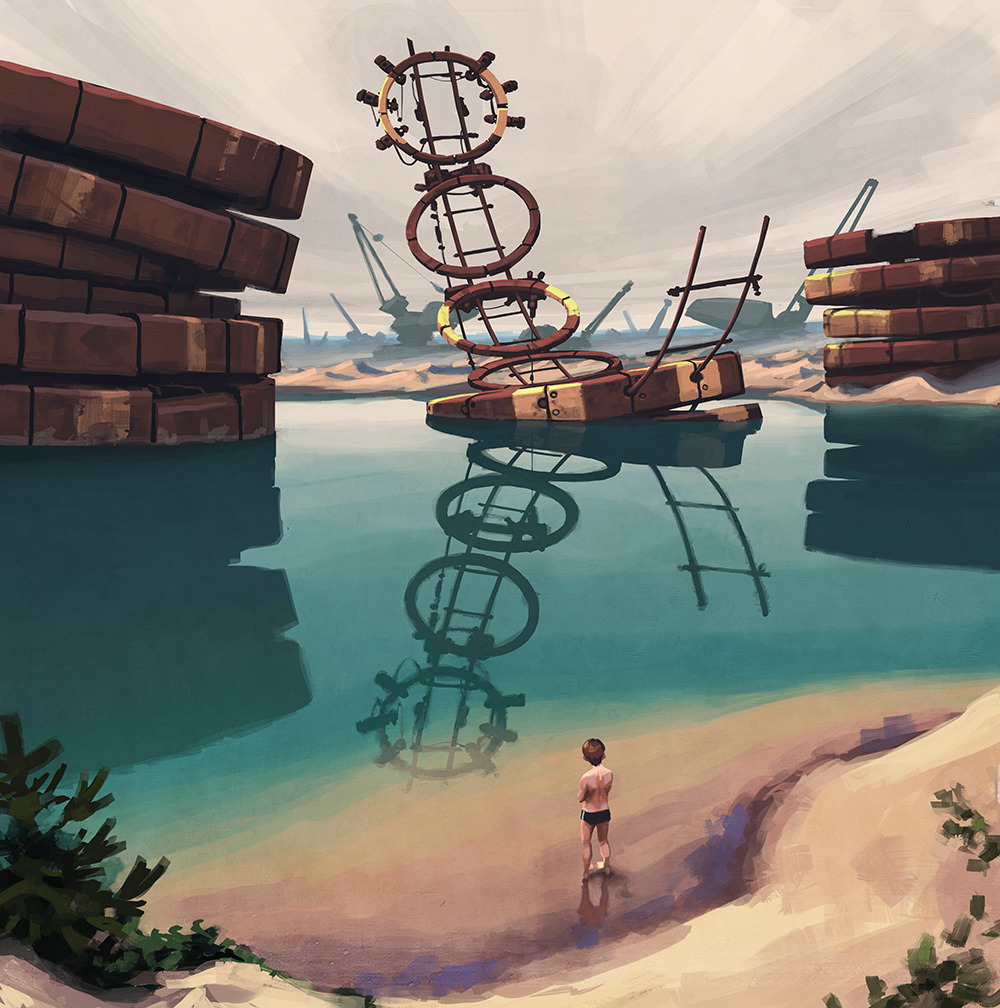 The Year Zero Engine is a dice-pool system where whenever you’re performing some kind of skill check, be it trying to sweet-talk someone, hacking a computer or climbing over a tall fence you roll a number of dice equal to your skill and attribute value added together. Any die that comes up a six is a succeed. Harder skill checks might require more than one success, but the rulebook suggests using harder checks sparingly. If a roll fails a player may opt to “push” the roll, and when doing so they re-roll any dice that did not come up a six, but they also take a condition.

Conditions are the closest thing this game has to damage, and represents the character getting hurt, stressed, upset or other negative things, and each condition suffered makes a character roll one less die until they can recover. If a kid suffers too many conditions they’ll be considered “broken” and are so hurt or exhausted that they can’t really do much until they can get some rest. Broken does not mean risk of death though, and this is not a game where player characters will die.

The rules are intentionally left quite open, and the way the rules are written encourages players to describe what they’re doing, rather than just roll the dice. It’s a hands off approach from the rules that might come as a bit of a shock for someone who’s mostly played Dungeons & Dragons, or even Alien (which also uses the Year Zero Engine), and requires the GM and players to rely more on their best judgment than in games that have more rigidly defined rules.

Like in most starter boxes there are some rules missing. The most important section by far is the one on character creation. There are no character creation rules in the starter set for Tales from the Loop, so you’re stuck with the characters that are already in here. The main game is still quite rules light though, and the majority of the rules are here.

The starter box comes with a short adventure featuring the five characters that comes in the box, and a mysterious 5th boy named either Pelle of Charlie. It’s a short mystery that starts with the kids going to school (as usual) and finding that a rogue robot has injured one of the teachers and ripped the front door from its hinges. Pelle or Charlie is nowhere to be found, and his parents can not be reached. Now it’s up to the kids to figure out what’s going on and hopefully save their friend. 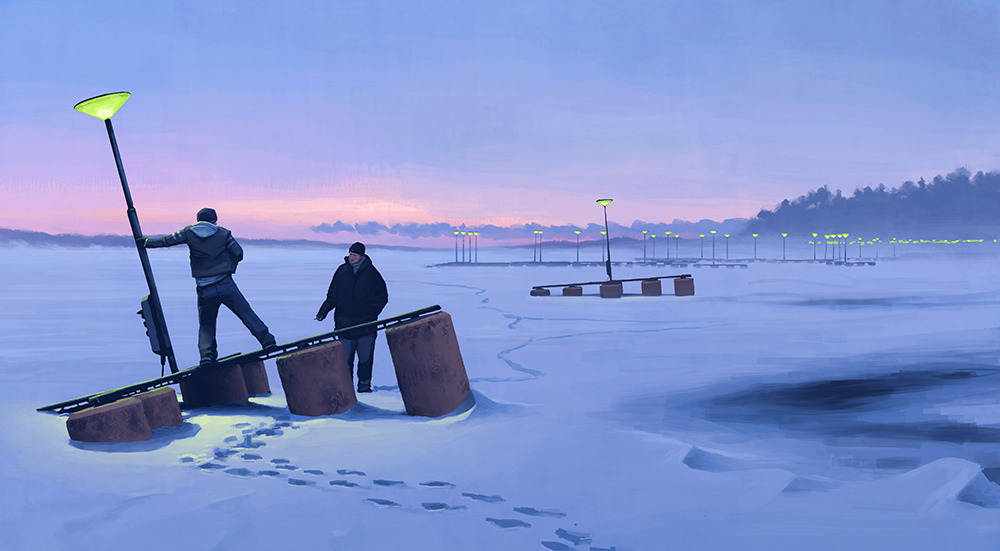 The scenario can be played in either the Swedish or US location, and all the characters have two names, one being a common Swedish one, and the other a common name in the US, although through the adventure the Swedish names are used when describing characters beyond their first introduction. As a starter set adventure it’s pretty good, and has no shortage of tips for how to keep the adventure going, without feeling railroaded. In fact it’s pretty easy for the players to go off script in it and go someplace that the GM did not expect them to. For any GM not used to running mysteries this one is a good introduction. It is short though, and depending on how focused and creative the players are, and how many other things the players have to deal with, it can be played in 1-2 sessions.

Both booklets that comes in the box share a unified style, both have a pretty airy layout with a lot of pictures. It feels at times like the books are more interested in showing you the art than the rules, going by how much of it there is, and considering how good the art actually is, that’s not a bad thing. It’s generally quite easy to find what you’re looking for, both in the rules and in the adventure, though this is helped by the fact that the pagecount is quite low.

The art is, as you would expect from a game based on someone’s art, really good. It is beautiful and much of it is almost a bit haunting. If you’ve never seen the art by Simon Stålenhag then you should absolutely take a look at it, it’s amazing.

The starter set for Tales from the Loop, as well as the main book both have Roll20 modules. For the starter set you get everything from the box, including characters and maps. All the larger images, as well as the location maps and the map of both Ekerö Municipality and the Boulder City region are in a format that can easily be shared with the players. The region maps also have location markers set to be viable for just the GM, so you can easy tell where the major locations for the adventure are located. All the rules and setting descriptions are also here, and by default set to being visible for the players, while character sheets and information regarding the adventure is not, making this a pretty handy module to use if you’re going to run it on Roll20. It does have a few minor issues though, for one there’s a bit of information missing from the character sheet. Nothing critical to run the game, but flavour things, like what songs the character like, as well as their iconic items. All of these things are on the character sheets that comes with the physical version of the game.

Well this is a tough one to review. As you can see above I gave it two separate scores depending on if it’s the physical or digital version. The starter box only contains a single short adventure, one that should take 1-2 evenings to play through (my group figured out a way of bypassing some obstacles so they were able to get through it in just over 4h). As an introductory adventure it’s really quite good, and overall this is a good box for getting into Tales from the Loop. The characters are not so tied to the adventure that you can’t come up with new adventures for them, but there’s no rules for character advancements in the box, and nothing else ties in with it. This makes the physical release a tough sell for anyone not interested in the themed dice and the map. If those things are of interest, then the physical release of the starter set is worth getting, but if not then its high price might be reason enough to just go digital. The starter set is well worth the $5 it costs on DrivethruRPG, but it might be harder to justify paying $30 that the physical release costs, unless you really want the themed dice, which are normally pretty expensive.