Some people use gems for spiritual healing, others trade them for good and services. I use gems for what in my opinion is a far more prized and appreciated reason and that is as a valuable weapon to wage war. The ice runs cold in my veins as I strike out with GemCraft: Frostborn Wrath.

GemCraft is a fairly long running series that I have dabbled with over the years starting way back with the original on Newgrounds. While the core mechanics have not changed much in all that time, the depth of the game certainly has. I have been playing and enjoying Tower Defense (TD) games since Warcraft 3 custom games introduced me to the genre via Wintermaul TD. There were certain positions I preferred to build in and I knew how to do the hook effectively (a bit of an exploitive tactic that mildly broke the game and allowed better success for the team). Once I stopped playing Warcraft 3 I found myself looking online for other TDs and discovered GemCraft.

The core idea of a Tower Defense game is simple, build towers and defend yourself. Typically, on early levels in almost any TD there is just one path for the enemies to take to reach your core (mission critical building), but later on there will be more paths. While you cannot simply just build a wall and halt the advance of your enemies, you can build mazes to slow them down to allow your towers, traps and other defenses to fire at them. There are usually a variety of tower types to build all with their own unique abilities as well as a variety of enemy types to deal with too so just repeating the same designs every time will not necessarily work all that well. In any case, altering the style and design adds an element of interest to the game. Those common TD elements do make up the basics of GemCraft as well; however, GemCraft takes the idea a little differently. In GemCraft the towers do absolutely nothing by themselves other than perhaps block or restrict a path the enemy may be taking. The actual defense comes from socketing gems into the towers. The gems come in a decent variety of types, with a limited number of types being available each map. These gems are where the game really starts to shine. Besides just socketing them in, you can upgrade them to higher tiers simply by taking another gem of the same level and combining them. Here is the thing about combining gems though; they do not even have to be the same type. Pure gems are typically better in the long run at doing whatever it is that gem type does, but combo gems blend the elements together to make a multifunctional gem. You can even blend blended gems together to make an even more blended gem. Careful strategy with how you craft your gems is needed to ensure you are victorious. However, in GemCraft defeat is not necessarily a bad thing. 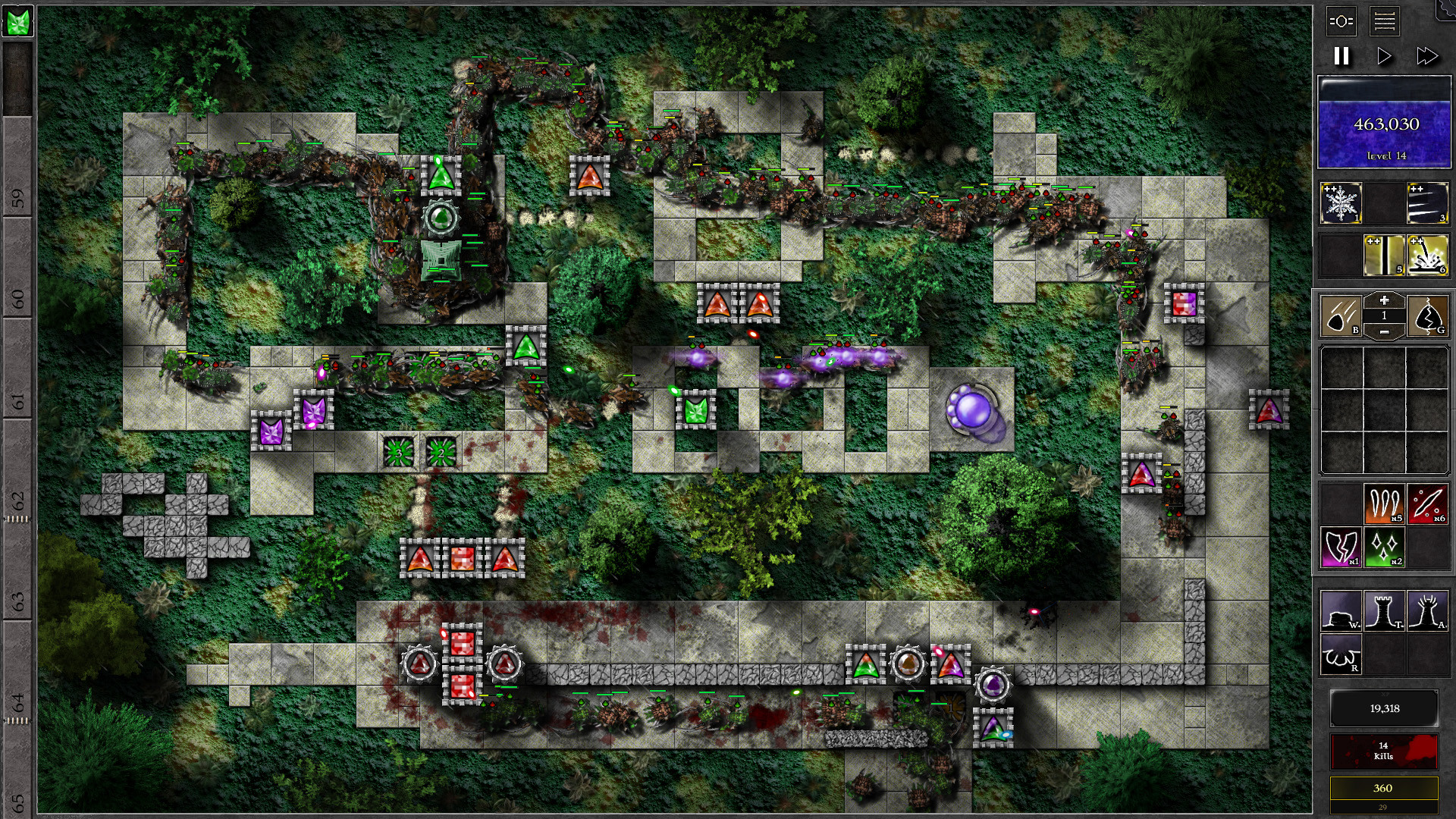 Earlier GemCraft titles suffered from the same basic issues, the early game is quite hard, but once you level up sufficiently and get a grip on how things work and figure out what works well in what situations the games become quite easy. GemCraft: Frostborn Wrath starts out with a similar difficulty as GemCraft: Chasing Shadows but unlike its predecessor Frostborn Wrath gets much more challenging later on. Every time you fail, you still gain experience and other things that will help you improve your chances next time. This will also mean you will tend to replay earlier stages in order to gain additional experience and resources should you find your progress halted by a particularly challenging level. Rather than just purely replaying the earlier levels you can replay them with modifications, both self-imposed ones and challenge based ones. This helps keep the game more interesting and not feel quite as grindy since you don’t have to repeat the identical actions each time.

Some of the resources mentioned above are the experience points which are used to level your character or increase your mana pool (if you do not spend them). The mana pool is what is used to craft, combine gems and otherwise use your abilities while playing a round. It is spent when used and regenerates by you defeating your enemies. You can also get talismans that are shaped like puzzle pieces that when slotted together will give various bonuses and can also be leveled up to enhance those bonuses. Shadow cores are another resource that is collected regardless of if you win or lose a match and can be used for various enhancements. 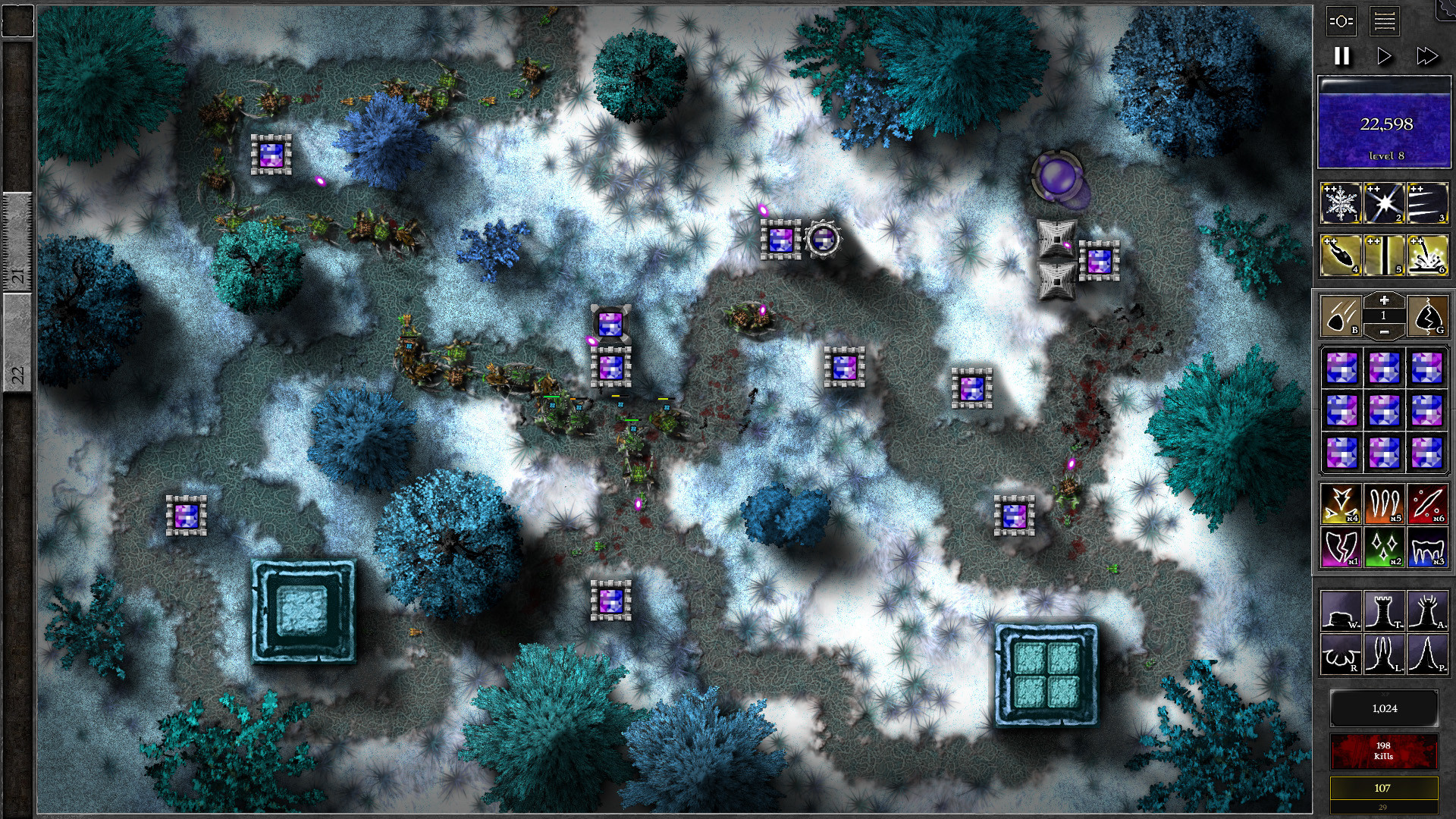 You need to be somewhat strategic when you are starting off due to your limited resources. Sometimes not upgrading your character and allowing the unspent experience to inflate your mana pool is a good idea. There is a lot more to the strategy than that though. On some maps there are enemy boosters that enhance any enemies that move past them, chests that need to be broken open, natural debris walls that need cleared to make a more optimal maze route and in all those cases you will need to place a gem facetted tower near them if you want to clear them out. Besides just normal towers, there are also walls, traps, lanterns, pylons and other things for you to utilize to help turn the tide of battle in your favour. Each one offers its own unique impact to the battle.

There are plenty of achievements for you to collect as you play through the game. Early on it is not unusual for you to unlock several achievements per map you play. As to be expected, they do start slowing down a bit later once you have exhausted all the easy to acquire ones. There are over six hundred of them to collect so good luck getting to 100% any time soon! There is also a story to collect as you go through the game, which is technically a continuation of the previous games, but it is not mission critical to follow it if you do not want to. It is an interesting read although can be a little confusing at times based on its delivery method and writing style. 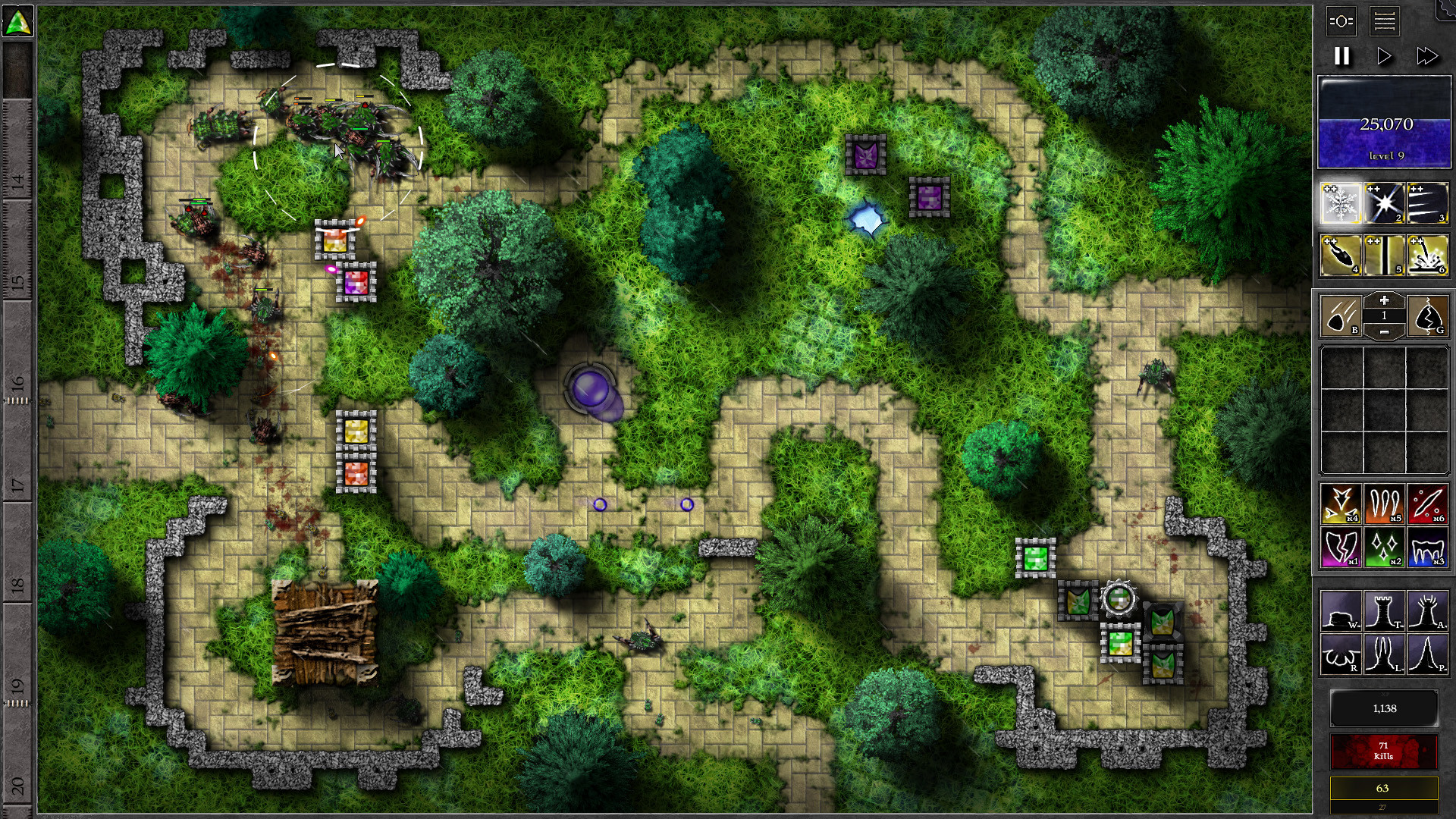 While naturally there have been improvements over the decade, GemCraft still has its classic look. It is not the most elegant game ever made but it actually does not need to be. The system requirements called for basically consist of “does your computer turn on?” The top down look allows you to see the entire battlefield at any given time. While colour is used to make areas look different there is really no difference from one map to the next other than the natural layout. It may look a bit busy but it is not distracting. The enemies have a variety of looks too to help you distinguish what type of monster they are so you can ensure you have the correct countering gems socketed. Each tier of gem is easy to distinguish based on its shape and you can quickly tell what each gem does by looking at its colour(s) although some gems kind of look like they include elements they do not just because of the colour blending. Even two otherwise identical gems may differ in appearance simply by the randomness of the colour blending.

The audio is simplistic which fits with the genre and has no spoken dialogue. The sound effects are very repetitive and basic, but it makes complete sense for them to be like that. It is mostly the sound effects of your gems hitting their targets or feedback from you interacting with something. The background music at default volume levels is fairly subtle but helps with the atmosphere and is surprisingly good. 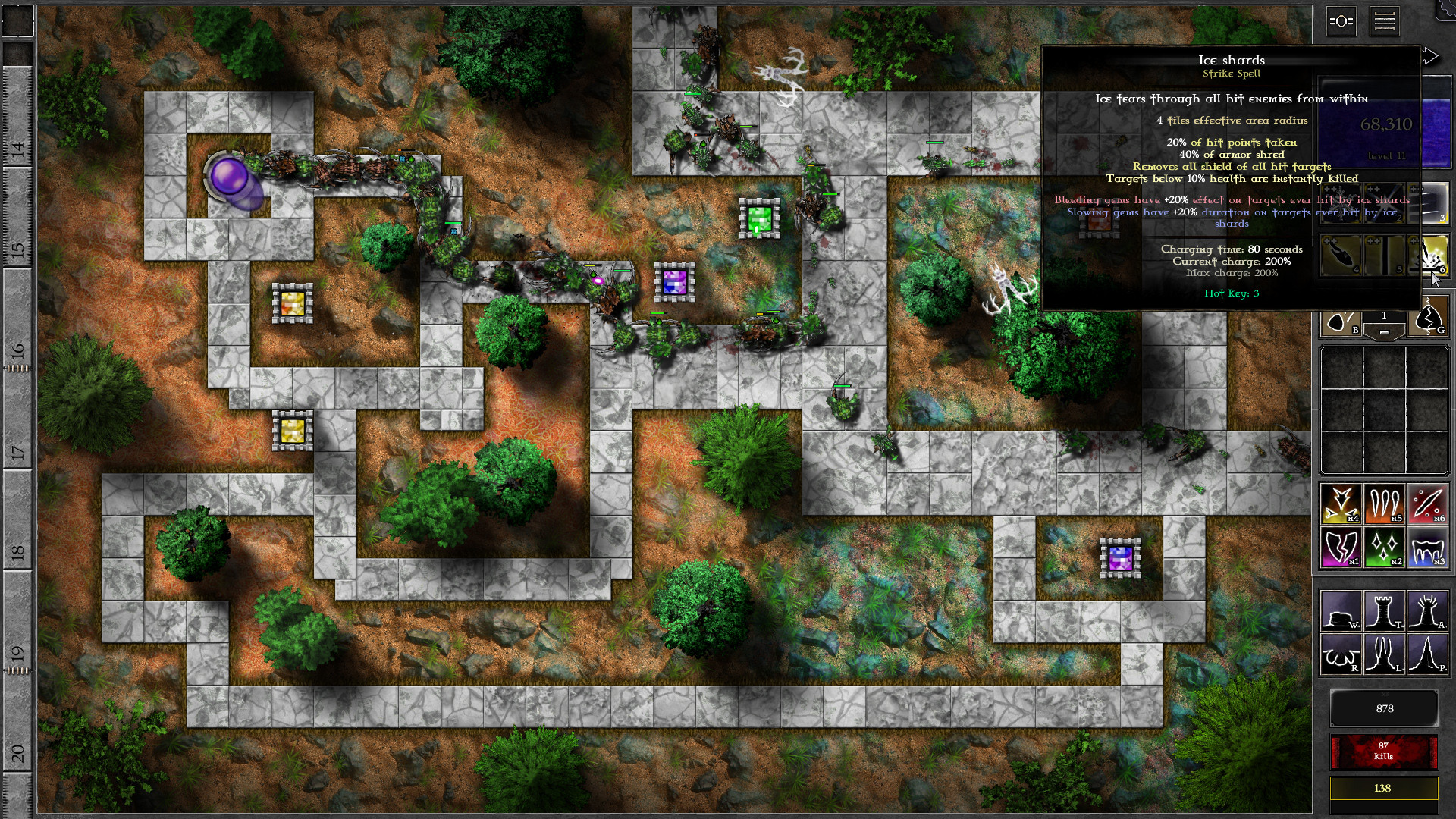 The user interface is very straight forward. Everything can be done either by clicking the buttons or by pressing the hotkeys. There are visual indicators for everything pertinent such as the range of your current gem and even as simple as being able to tell what a gem does by its colour. Probably the most complicated thing in this game’s user interface is figuring out how to exit the game properly. There is a semi-offscreen gear icon in the upper right corner and clicking on that gives you the menu. The various menus are easy to navigate and the game introduces all new elements with popup text boxes. The game even goes so far as to show you what you will get for upgrading your talisman or skill levels before you commit to it.

So, should you pick up GemCraft: Frostborn Wrath? If you are a fan of the previous GemCraft games, then you certainly will want to pick up the latest chapter. While it feels overall the same as the previous games it introduces new elements to catch your attention and keep it interesting. If you are a fan of Tower Defense games in general, then GemCraft is certainly a series for you to try and Frostborn Wrath is a great entry point into the series. If you have never played a TD but are curious, GemCraft, while being a little more complicated than a standard TD, is still an excellent example of what a TD can offer you in terms of gameplay. If you get easily frustrated with losses and hate the idea of grinding at all, then perhaps Frostborn Wrath is not the best entry in the series for you. Yes, perhaps there are much better-looking TD games out there and even more feature rich titles, but GemCraft: Frostborn Wrath is still an excellent entry into the genre. It will be one that I will Save in my collection.