REVIEW: Lost Words: Beyond the Page

An exceptionally beautiful game that is immaculately conceived and delivered. A unique experience that will stay with you.

Lost Words: Beyond the Page is a narrative adventure game with light puzzle elements.
Featuring an immersive story crafted by renowned games writer Rhianna Pratchett, we navigate a 2D world inside a young girl’s diary and use magical words to manipulate objects in a fantasy world of the girl’s creation. 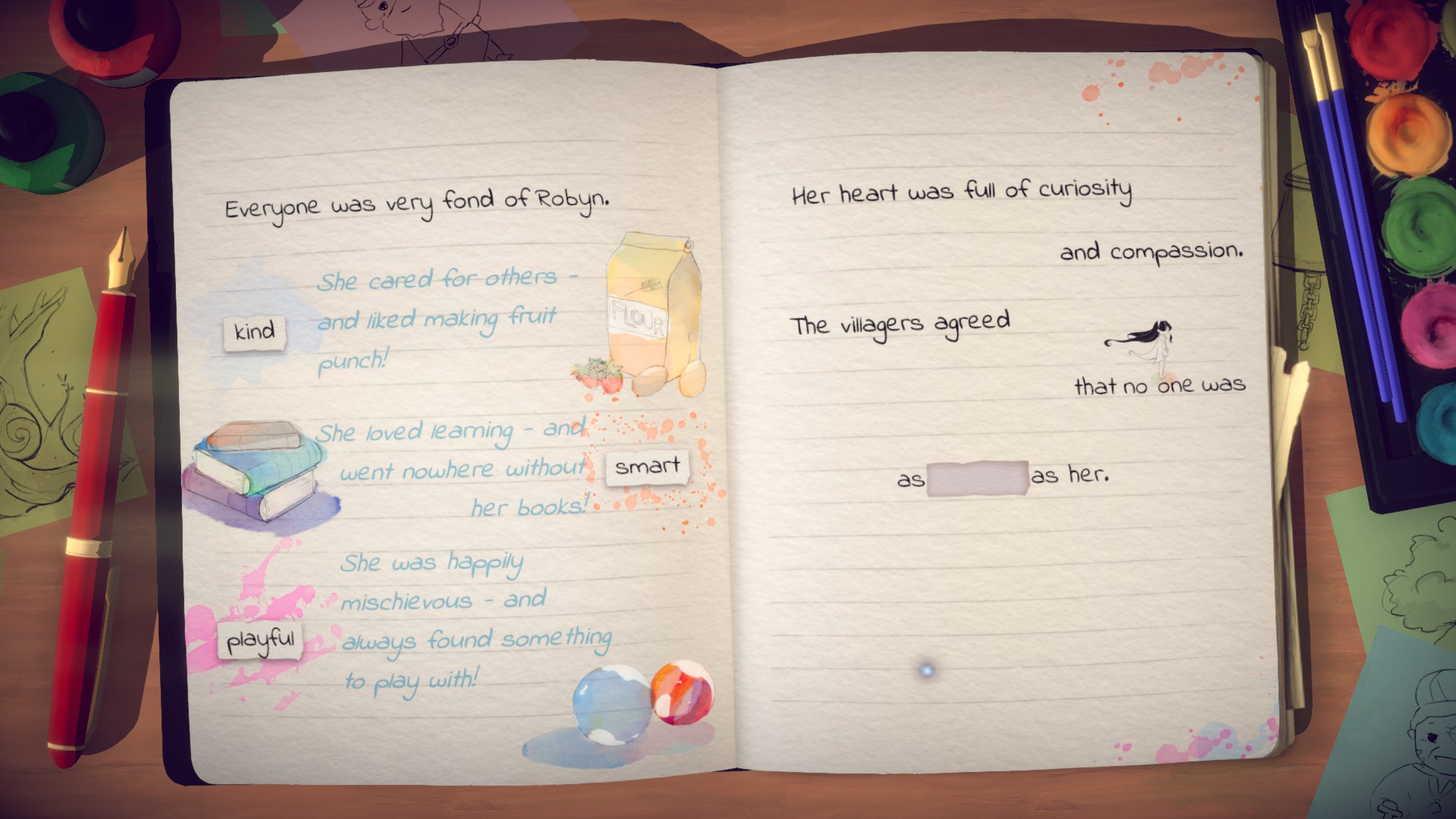 NO SPOILERS
Diaries are a very personal medium to record your thoughts and write down noteworthy events in your life. We have the privilege of entering the mind of Izzy, a young girl and budding author.

The story unfolds as we experience her thoughts, writing them down in her personal diary. We also participate in the fantasy world of Estoria, which she has created to make sense of events she cannot comprehend in the real world.

In Estoria, the village has been ravished by a dragon and the fireflies, who protect the village, have been driven away. Izzy goes on a quest to find and collect all the fireflies and return them to the village, returning it to its former glory.

Don’t read too much about the story. Try and go into the game with as little information as possible. You will be rewarded for not doing so.

In the diary we traverse the words she writes on the page, running along them and jumping from word to word.

Certain words have deeper meanings, and if we jump on them, they will create a special event, like draw a picture or create a new sentence.

Some words we can move around the screen, placing them in sentences so that they make sense, or even using them as platforms to reach other sentences.

Occasionally there will be asterisks which you can touch to reveal comments and even deeper thoughts about the sentence.

We keep jumping on words until the exit is revealed. Jumping into the exit moves on to the next page of the journal.

In Estoria, the world is 3D and we possess a magical spellbook which utilizes the power of words to manipulate objects.

Throughout the game you will learn the powers of rise, repair, break, burn, swap and ignore. Once learnt, these stay with you and can be used at any time. You will also learn temporary words which will aid you briefly but then disappear.

Objects that can be manipulated will glow, and then it is up to you to decide which word is best used to manipulate that object. There is no wrong answer. It will either work or it won’t. You can keep trying until something happens but most of the time it will be obvious.

Rise makes objects rise; break destroys and clears objects from your path; repair restores broken objects; burn disintegrates objects; swap replaces you with another character and ignore is used to discount any ill effects an object may have.

Occasionally, you’ll get the opportunity to choose from a selection of words to alter the story slightly. This begins with your name and attire but progresses into story plot decisions which the developers suggest will make each playthrough unique.

I loved the water colour aesthetic in the journal and words were presented in a clear and amenable fashion.

The 3D world felt cartoon like in appearance but perfectly resembled what a young girl might imagine. There were some nice touches throughout and although not ground breaking, the look was pleasing.

The sound is wonderful with an excellent soundtrack and professionally voiced acting.

Music is played to emphasise emotion and is very successful in this way. The music perfectly accompanies the sentimental story.

Lost Words is a masterclass in how to present an intelligent, thought provoking and emotional story in an imaginative and innovative way.

Everything about the game oozes class and sophistication.

The story produces a gamut of emotions, is paced superbly and is cleverly presented in a unique way.

The voice acting is very good and each character we meet is interesting and entertaining.

The two different worlds add a nice contrast in gameplay but at the same time are connected in clever ways. The journal often acts as a conduit into the 3D world where Izzy’s thoughts, concerns and fears are realized. There are lots of different ways emotions are portrayed in the game and they all feel fresh and contemporary.

The use of the journal is incredibly imaginative. The way the words are presented, often mirroring their meaning, is impressive. For example, a scene about steps presents the words in a staircase fashion or discussions about fragility could mean the words shatter as you step on them.

The artwork in both worlds is nice too with a water colour aesthetic which looks beautiful. The journal produces sketch book doodles when certain words are jumped on and this produces the majority of the emotions in the game, and there are plenty of opportunities to laugh and cry.

I don’t think I have ever seen a more imaginative way of portraying thoughts and feelings as much as Lost Words does. It also forces you to contemplate on your own life and an inevitable connection is made. It leaves you pondering the events long after you finish the game.

Don’t be fooled into thinking this is a challenging puzzle game however. The solutions are pretty evident and won’t test most people. This did not bother me. The story was the main attraction and the puzzle elements were just a vehicle to carry it along. There is some difficulty in collecting all of the fireflies though, so that may present a small challenge to achievement hunters.

The choices that you can make in regard to the story are minimal and may alter the story ever so slightly. I think it is wishful thinking to suggest that each playthrough will be unique as I suspect it will only change small parts of dialogue and the main story will remain the same.

Lost Words Beyond the Page is one the most innovative and imaginative game I have played in this genre.
It excels in every department as a narrative adventure but lacks any real challenge.
This is perfectly acceptable if you are after an entertaining and thought-provoking story but if you wanted a testing experience then look elsewhere.

I have no doubt that it will be hailed as a classic for many years to come.
If you enjoy emotional, narrative based games then just buy it now and enjoy.