So there is a chance of me becoming a successful drug lord?

This is an early access version of a game called Cartel Tycoon. The name basically already explains what it’s all about. It’s basically a new city builder/strategy game with a rather “illegal” setting as you’re the Boss of a cartel and with diplomatic and violent ideas you’re basically trying to grow your organization. Keep in mind that Cartel Tycoon is currently in Early Access and available in the Steam store and available with its own unique TinyBuild launcher.

I watched enough drug movies in order to beat this game!

As mentioned RTS games aren’t really my cup of coffee which means that I usually try to avoid them. But with this game, I had a sudden urge to play it, probably because I watched the entire Narcos series in one day and wanted to see how good of a drug lord I would be if I decided to lead a cartel. Jokes aside, this game looks and plays very nicely despite it still being in Early Access. It offers cutscenes with a protagonist and a pretty lengthy campaign as far as I could tell. Let’s take a better look!

*NOTE* I should mention that I reviewed a previous version of Cartel Tycoon so months ago. Since then a lot of things and mechanics took a big change. Here is the link to the previous review: Older Cartel Tycoon Preview

RTS and the tutorial:
Compared to the previous build of the game that I reviewed some months ago the developers did a fantastic job at making the tutorial a lot more helpful. Now you get a dedicated taskbar and a guide that explains everything in detail. Another addition was the fact that now you can hire lieutenants that can actually help out in various activities such as transporting goods, perhaps have a 20% income boost for a limited time or be able to make a robbery. All of these additions really made the game a lot more understandable and do-able.
The map is divided into many cities and each city does have a Mayor/ Leader. Your main goal is to earn their respect by doing various tasks that will be presented on your lower left side of your screen. Lastly, I should note that violence isn’t really the main theme of the game. It does not glorify the violent aspect of that lifestyle. Obviously, you do have some options. You can send a specialized member of your cartel to burn some buildings from the other cartels, you can even command another one of your members to assassinate an enemy. These are the main options when it comes to violence. The developers added gang wars that would activate once you have left one of your cities or buildings for a long time. You can capture it back if you got enough firepower which is why you should invest in some powerful lieutenants. One last occasion of violence occurs when you’re out of legal money which means that you cannot pay anything. The result comes with the game over screen where the game explains that you tried to flee the country but got shot close to the border.

Economy and Efficiency:
The statistical aspects of the game are definitely the strong point of the game. I really loved the multiple options when it comes to illegal money laundry. There are quite a lot of buildings that do get the job done, going from placebo Taxi offices to Jewelry stores or even Circuses. To go from raw product to legal cash is a long journey. First up you have to grow raw product on a farm (Opium), then a warehouse takes the Opium and stores it. If a lab is within reach the warehouse will then bring the Opium to the Airfield or Seaport. You can then theoretically ship it via plane or ship but the D.E.A might be sniffing around and investigate which will force you to stop using these buildings for some days. So then you have to hide the product somewhere between vegetables, coffee, or spices which I do consider a very deep and interesting aspect of the game. Basically hiding a small number of drugs in a box with coffee and smart things like that. These act as storage multipliers with 3, 5, and 6 units respectively. After completing a tour the drug money will be stored at the airport, harbor, or border post. You then have to transport the money to a bank to launder it. Then it is yours to do with as you please. Keep in mind that in each area you do get highlighted efficiency areas and combined with the efficiency ratings from the buildings you can achieve a pretty tactical system of production. Once again the addition of gang wars and robberies will benefit the player a lot but what I really liked was the fact that you can speak to the lawyer of the city and ask for some help which can be about D.E.A confiscations, Loyalty, or even ask for a sum of money if you’re in deep trouble.

You are a man called Cesar Garcetti and you have ended up in a city. You wander around and decide to call for a job. A mysterious voice starts speaking. After some jokes and business discussion, the mysterious man hands you the keys to start working with some plantations. After you have proven yourself worthy the mysterious man visits you. His name is Miguel Angel Gacha and he is basically one of your friends and the man that gave you a future as well as being your mentor. The game does not offer much of a traditional story but more so it tells a story with small discussion while talking about various events.
These are the only things that occur. Everything else just feels like a sandbox RTS game and I am totally fine with that. Your goal is basically to become the strongest cartel in the country, simple as that.

Keep in mind that the developers added some pretty nice cutscenes. I have to say that they really fletched out the story a lot more. 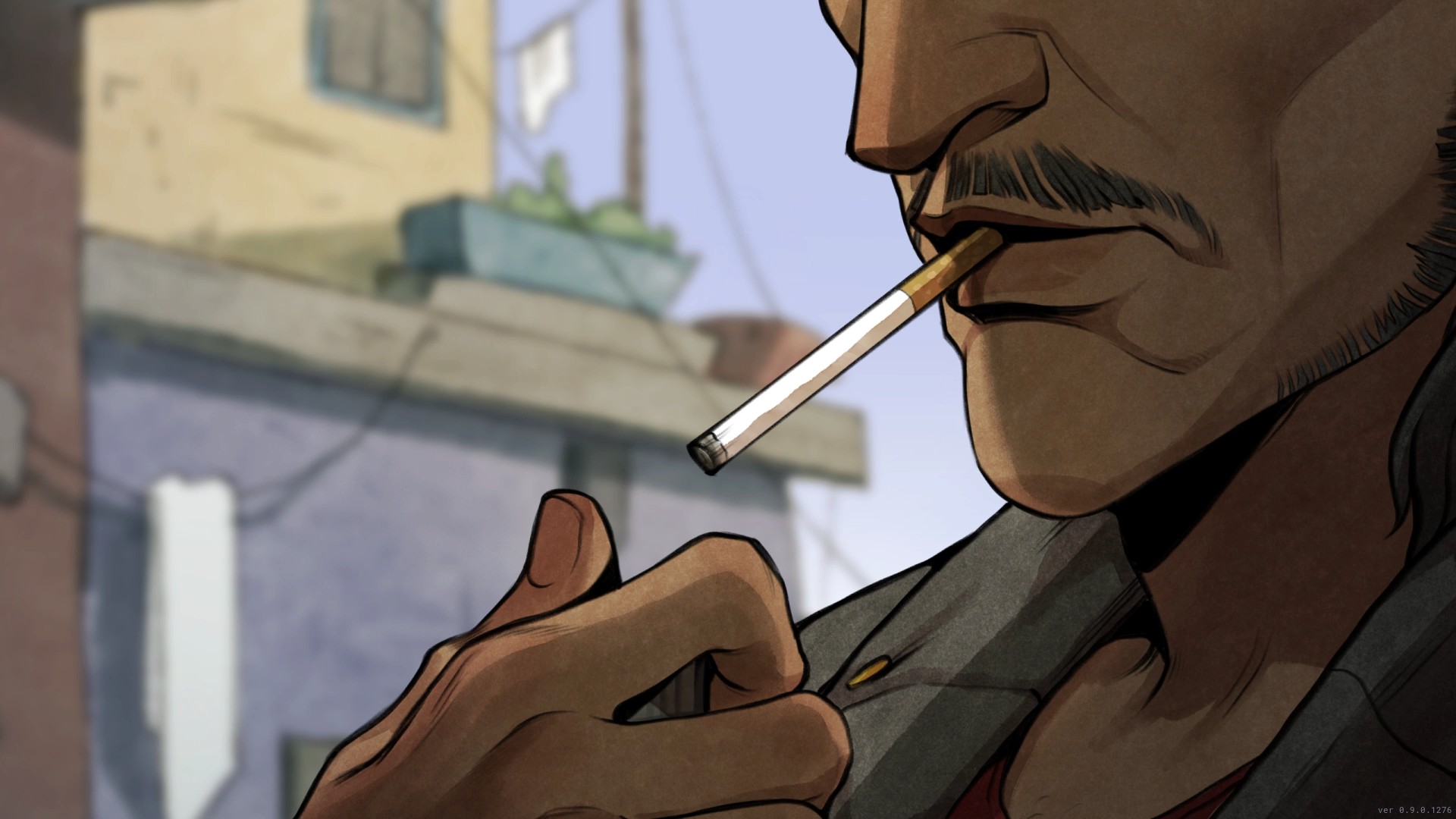 The Visuals aren’t anything new. It looks like a traditional RTS/City building game. On the contrary, it does look like a nice and tropical Latin country. 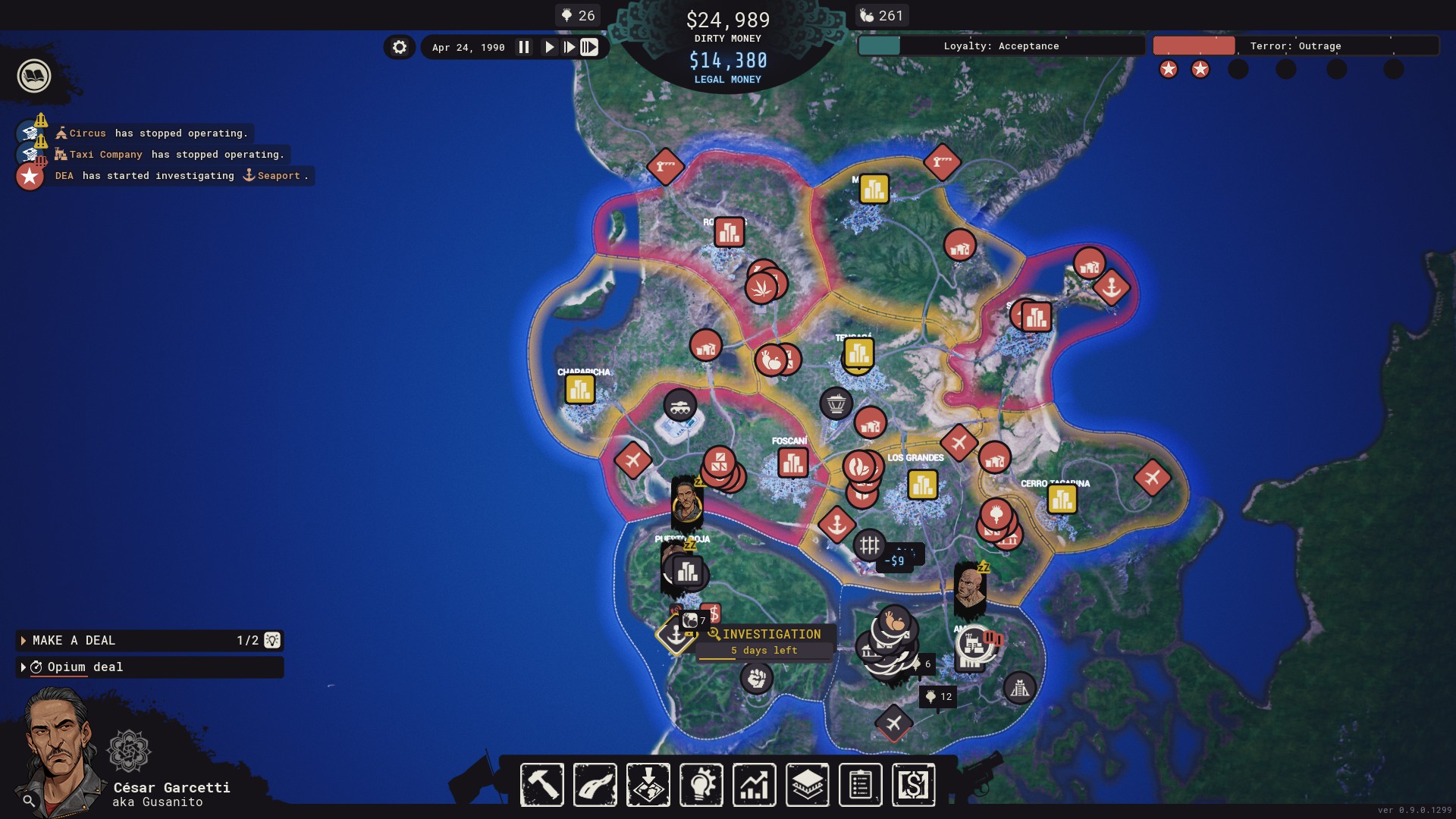 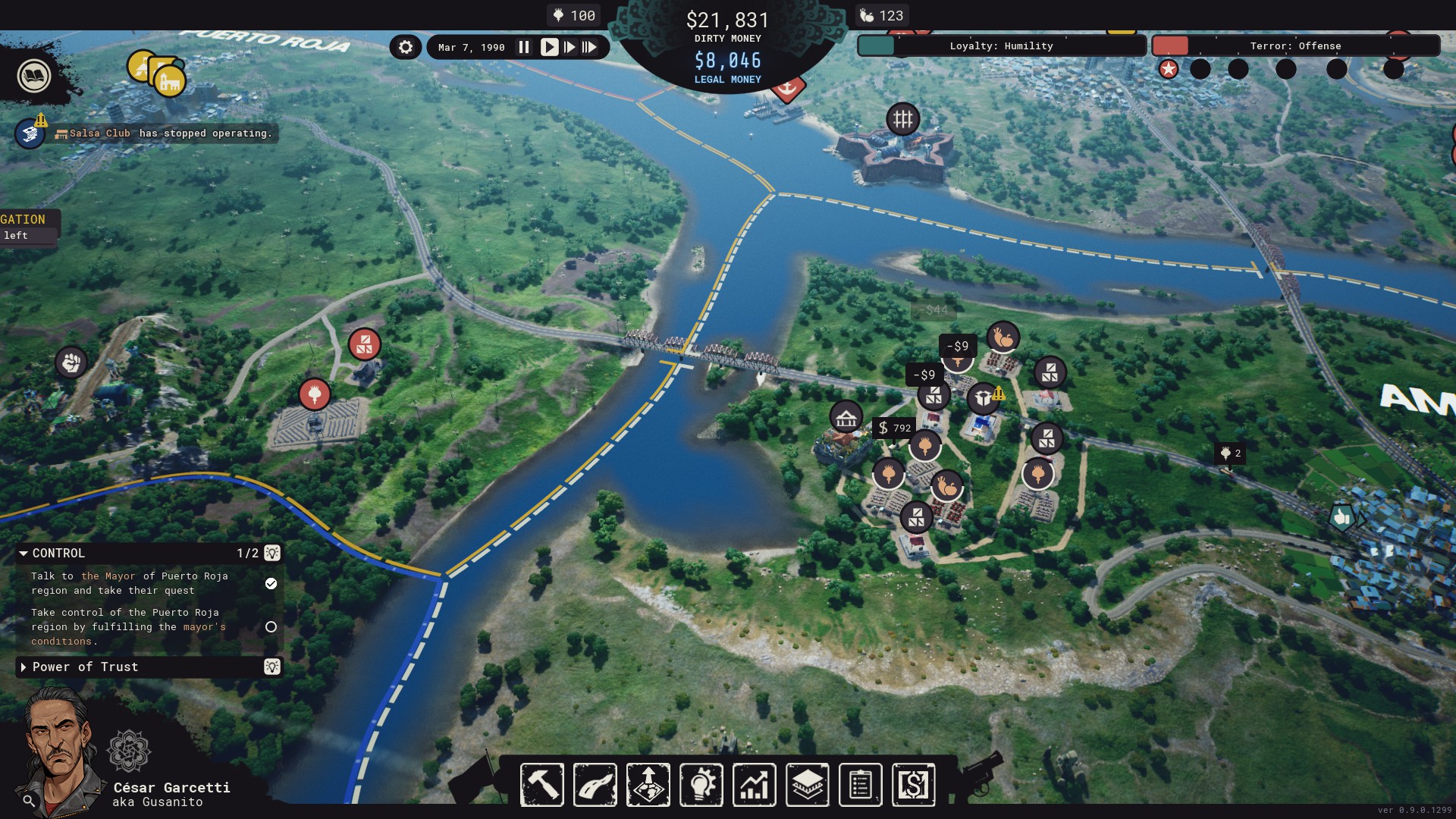 Audio / Soundtrack:
The audio is pretty basic and very little as well. The explosions do have a nice punch to them and the cars do sound like traditional high-revving 80’s vehicles but other than that it’s nothing new. On the other hand gentlemen, the soundtrack is truly magnificent. There were moments where I wanted to stand up and try my dancing skills and dance some SALSA! Well…I guess I made my point, the soundtrack is a fresh breath of air.

Bugs / Glitches / Crashes:
In around (Steam and Dedicated Cartel Tycoon Launcher) 13 hours of building my FLAWLESS drug empire in Latin America, I experienced no bugs, glitches or game-ending crashes at all. Truly a stable game considering it is still in Early Access.

The tutorial got much more user-friendly compared to the previous version I reviewed some months ago. The story feels a lot more imaginable than before where the entire storyline was structured around speech bubbles and text. Overall I can only give this game a very good rating, especially for Narcos and City Builder fans.