A charming fantasy adventure RPG with a rich world and a well-designed tactical combat system.

‘Shores Unknown’ is an RPG with a high fantasy plot, colourful visuals, and a tactical combat system. It is currently in early access, so only the first 6 – 8 hours of the game are currently available to play. However, there is a lot to experience and to enjoy in those few hours already. 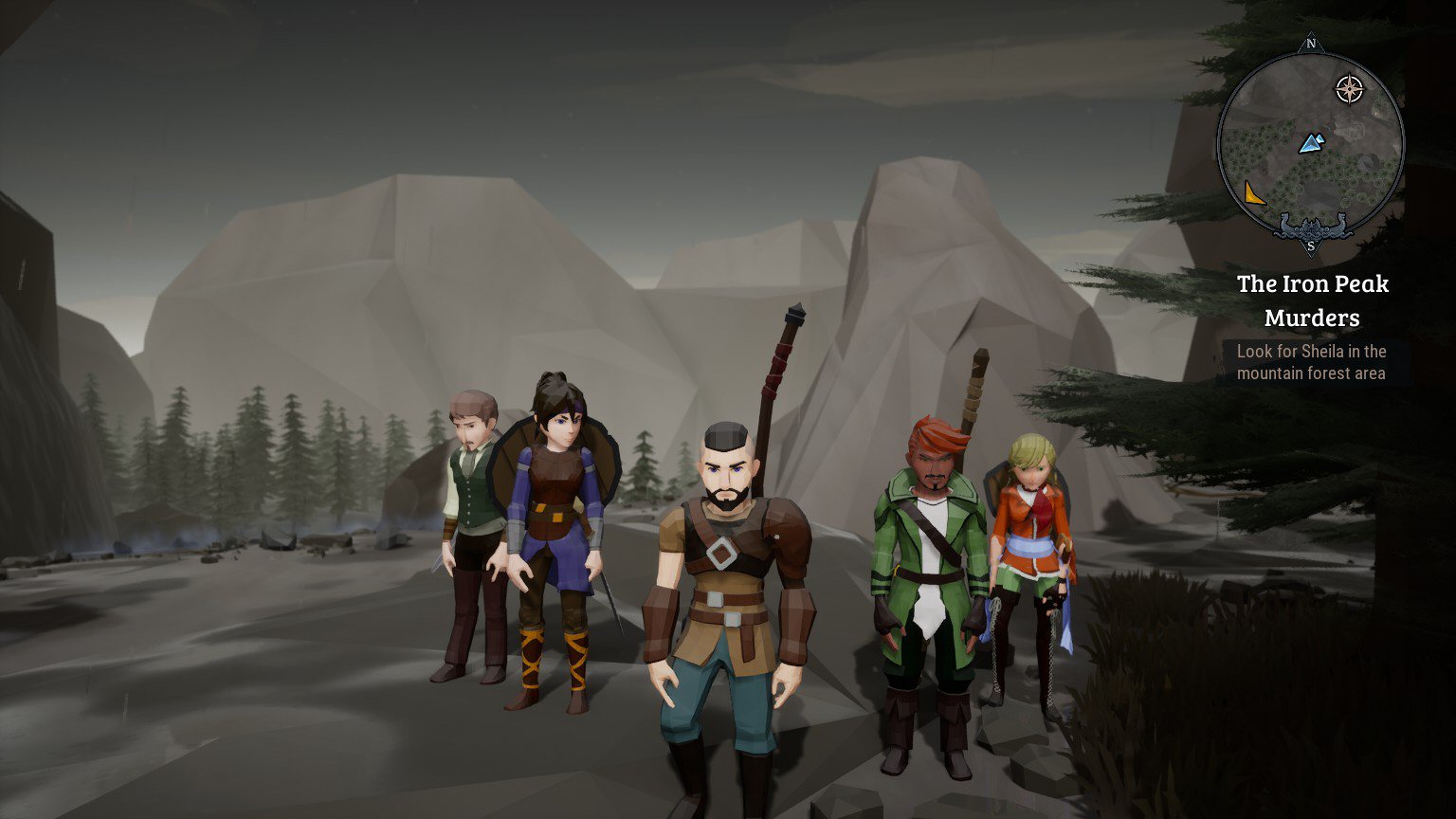 The story starts with a brother and sister mercenary duo, Morten and Ren, receiving a new mission which has them help out in a small village to prepare for an unusual event. Before long, things escalate and the crown army and inquisition get involved and we find ourselves on the run. As we make our way from one settlement to another, we acquire a handful of allies and a hideout and attempt to make sense of the situation. 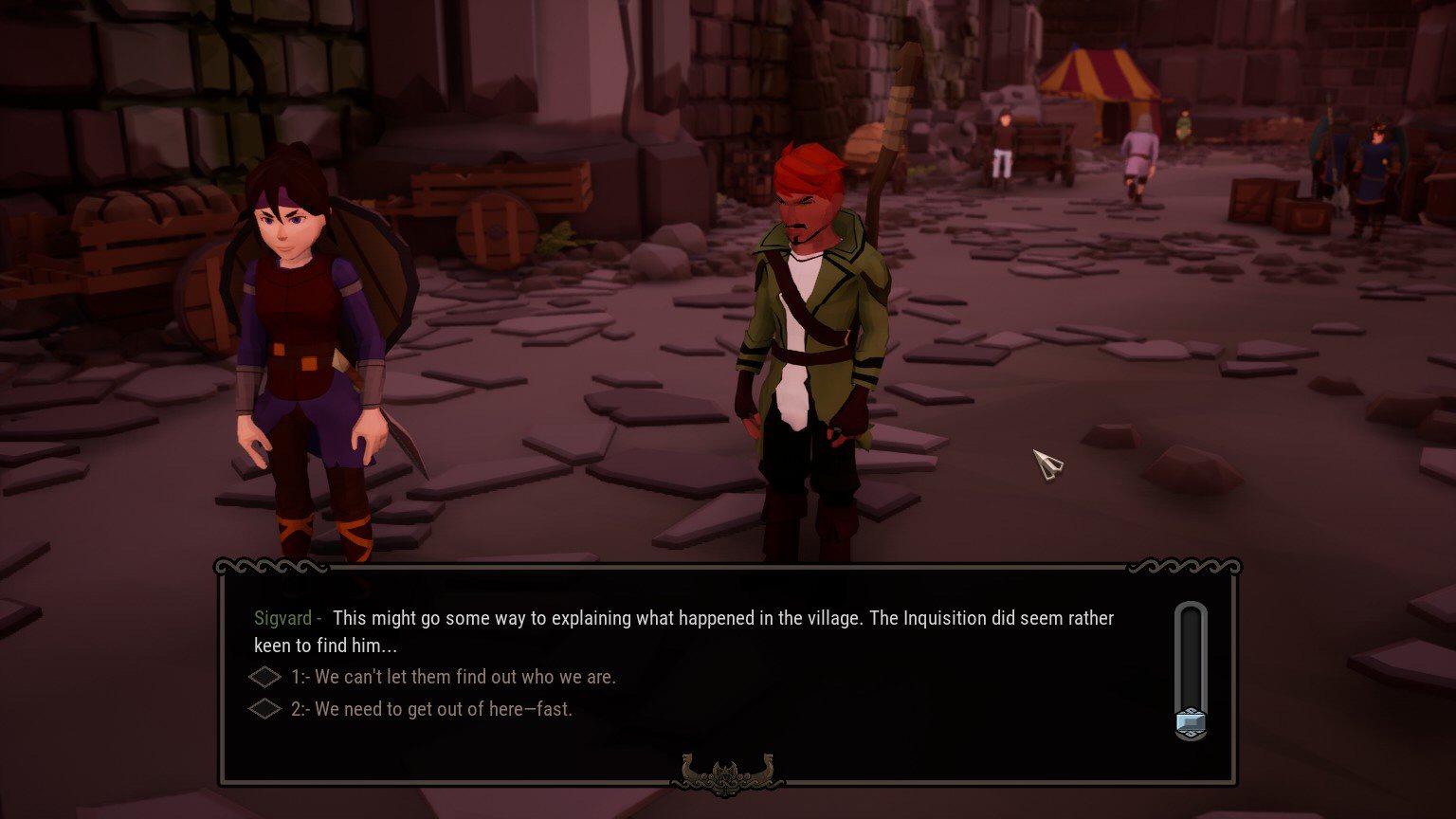 The game’s world has clearly had a lot of work put into it as it’s rich in lore. There’s a lot going on, and not only the events surrounding our characters, but many other events happening all over the country. The characters so far have been very interesting and likeable, and I can imagine we’d connect with them even more as we discover more of their backstories. Perhaps the main character, Morten, is the only one that feels a tad boring at the moment, though it seems a lot of who he is might be shaped by the moral choices we make during the game.

The presence of moral choices provides extra player engagement here, and they felt natural in the times they did occur so far. In addition to that, the sidequests we choose to do or not do can also affect some outcomes. From what I noticed, some of the sidequests are progression-sensitive – if we don’t do them, then after making some progress in the main story arc, the sidequest will be deemed as failed and perhaps an NPC you had to find has died as we didn’t rescue them in time.

For the most part, the world is very medieval-like with high fantasy elements such as magical spells and mythical creatures. 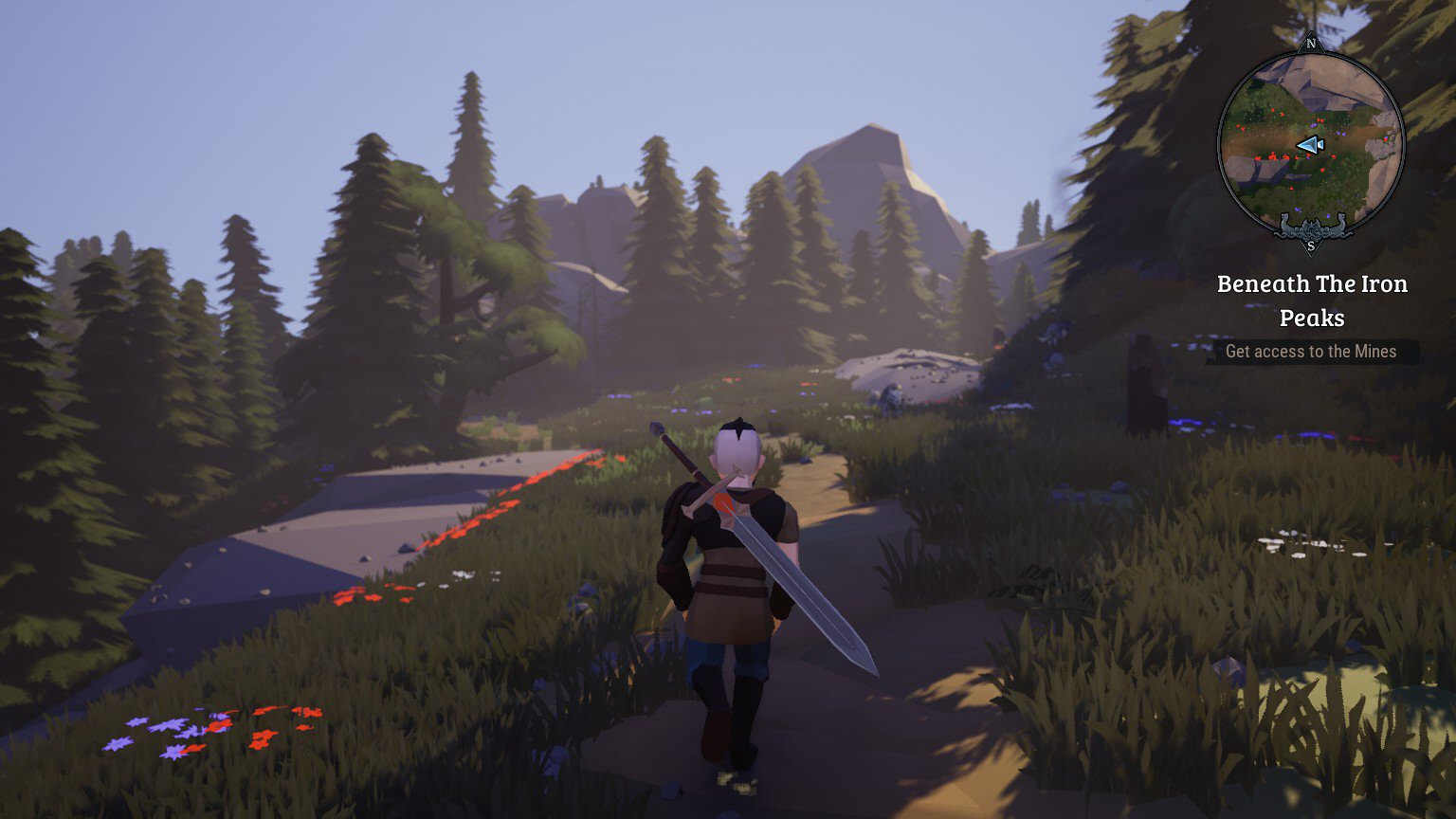 This game is primarily an RPG where we travel and explore the areas, talk to NPCs, get quests to complete, and make progress in the main story. It feels very much like a blend of Bioware type RPGs with JRPGs akin to Final Fantasy and Dragon Quest. There is a strong feel of an epic adventure where part of it is building our team of heroes with different talents, abilities, and backstories of their own. Many of us grew up with these types of RPGs, and in my opinion, ‘Shores Unknown’ taps into that vibe perfectly while simultaneously feeling fresh and with a personality of its own. 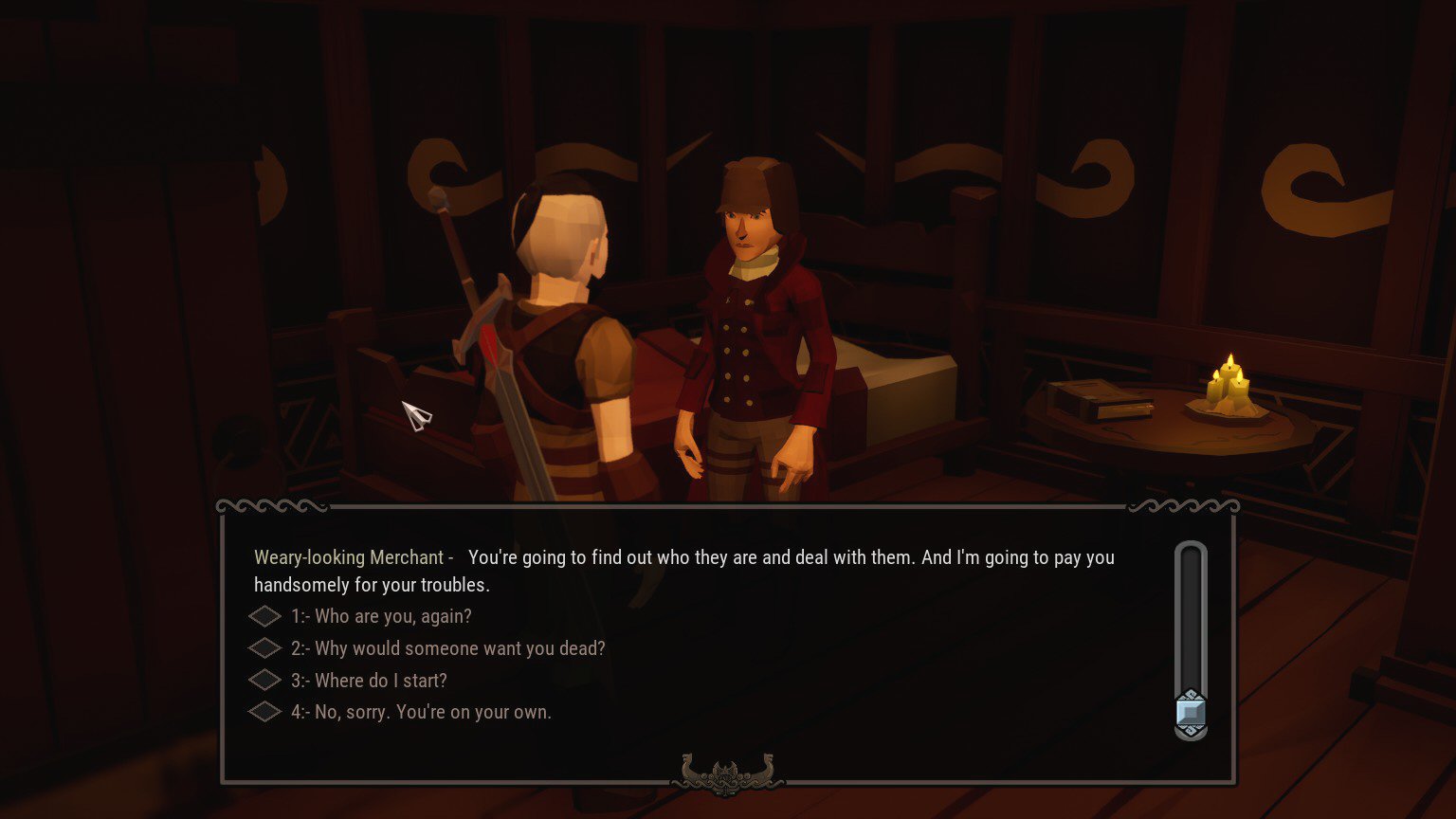 Another big aspect of gameplay is the tactical turn-based combat. Whenever we enter a battle, it happens on the map and all allies and enemies take turns in a certain order based on how fast they are. We choose what each of our characters does and then the whole turn plays out, after which we get to choose what our characters should do in the next turn. 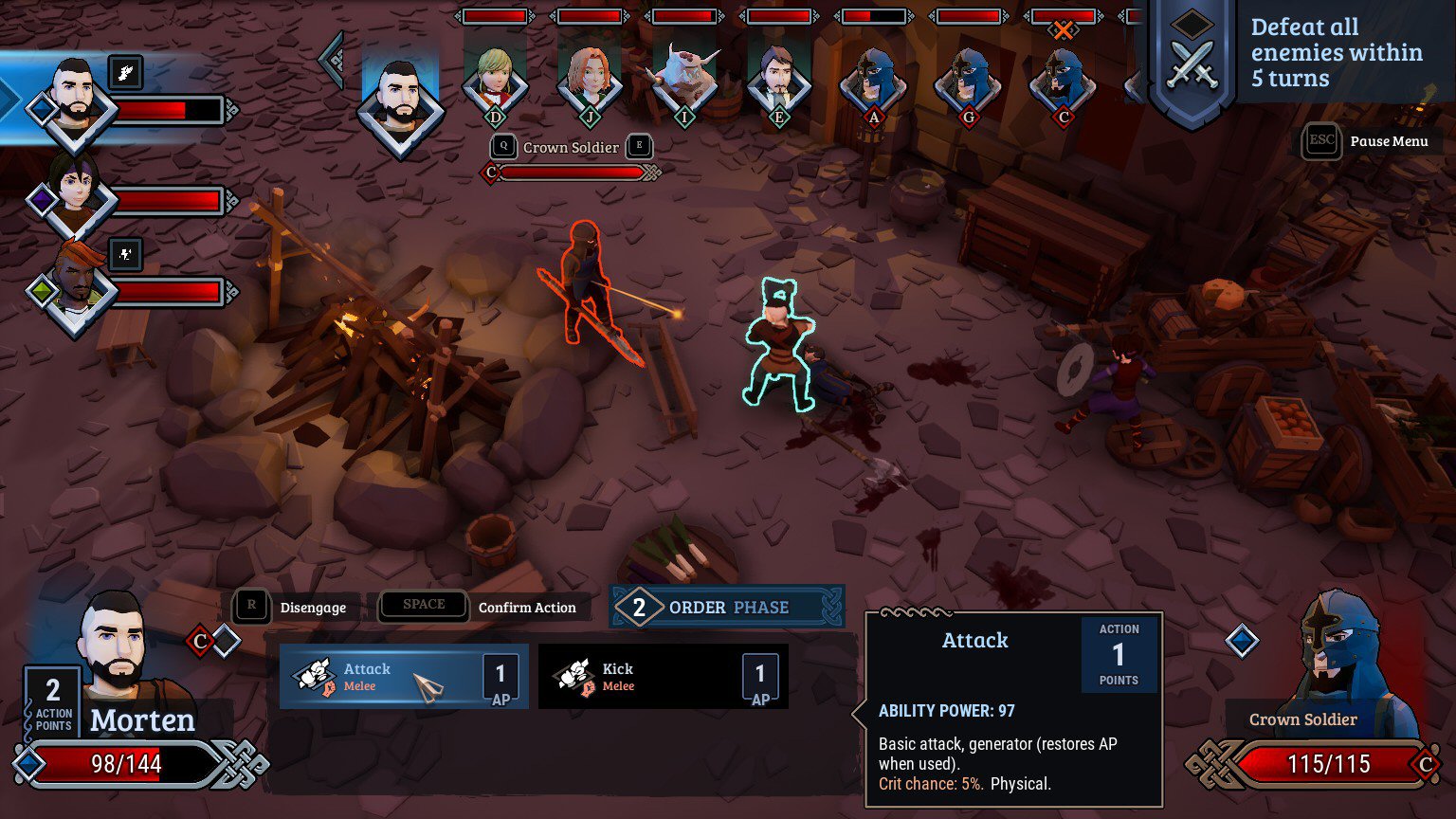 It may seem at first that the combat uses some form of positioning on the battlefield, but this actually doesn’t happen as the fighting does not happen on a grid. In actuality, any character from any part of the battlefield can attack any other character on the battlefield. The unique mechanic here, however, is the engagement mechanic. Whenever one character attacks another, they become engaged in a mini-battle. This means the other character will be forced to attack the one that attacked them, even if they were planning to attack someone else (the engagement can only be broken the next turn). Being engaged in a mini-battle can also provide some advantages or disadvantages to certain skills. It also creates potential for side attacks and attacks of opportunity that do more damage. If character A is engaged in a fight with B, and character C also attacks B, they will essentially ‘flank’ B and do more damage to them.

When we start out, we only have a few skills available, and so the combat is more or less straight-forward, but as our characters acquire more skills over time, more options become available, and the fights become more strategic and offer a tonne of different ways to tackle the challenge. What skills each of our characters will end up having depends on what weapon they use in battle. As they keep using a certain weapon type (e.g. a sword and shield, a two-handed sword, dual wield, etc), they will start learning skills associated with that weapon type. In that regard it is a good idea to choose early on what weapon type to specialise each character in. Each weapon’s effectiveness also depends on different stats. For example, a big heavy weapon will be most impacted by the wielder’s strength stat, while a short sword will be impacted more by the wielder’s versatility (aka dexterity). 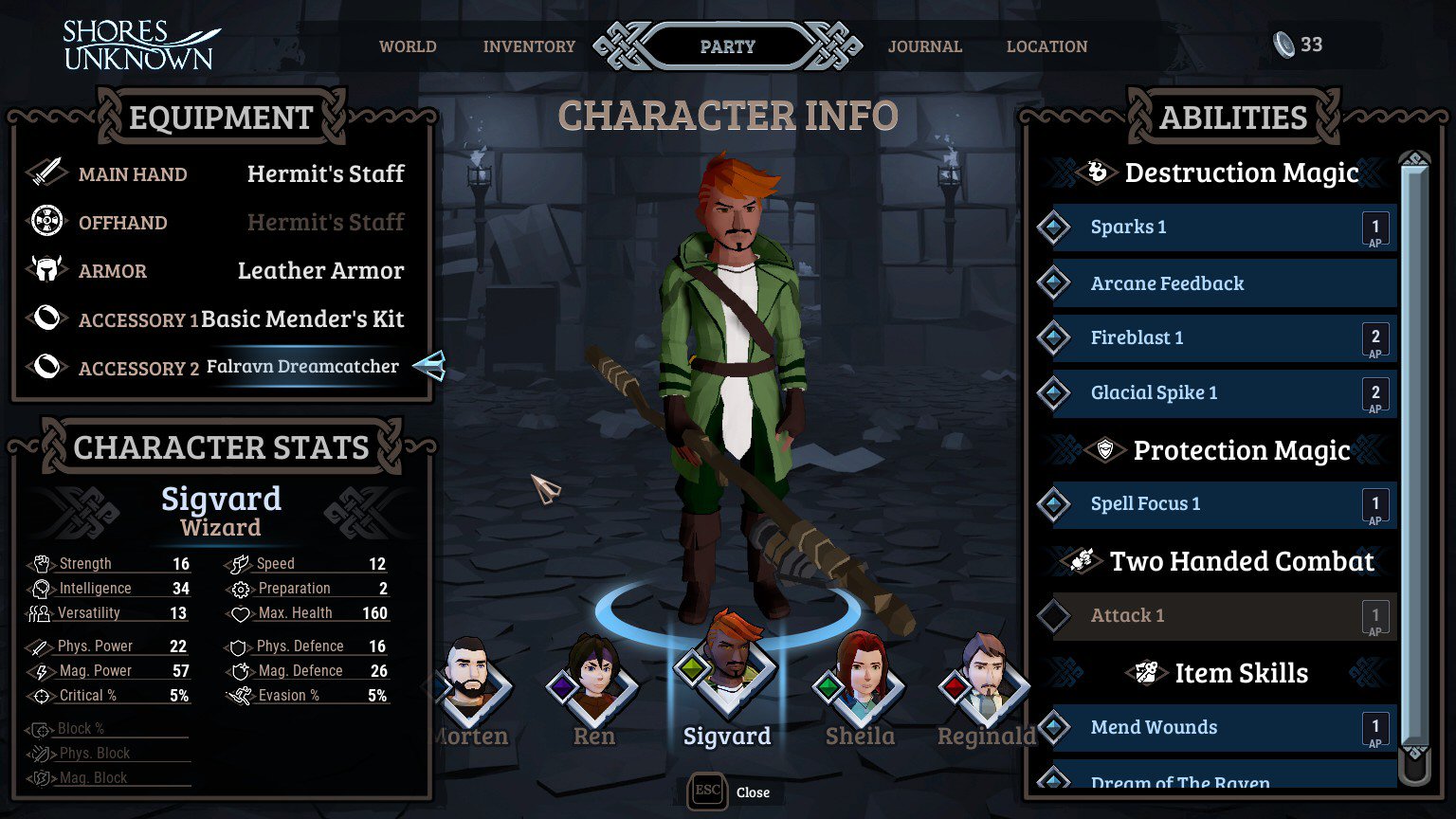 When putting it all together, the tactical combat system and the way characters level up and can be customized, it all offers a lot of ways and makes the battles interesting and fun. Some of the battles, especially the boss fights, are quite tough. They offer a very decent level of challenge, almost like a puzzle that we need to solve by figuring out what strategy is the most effective. A handful of them can seem a bit too hard, although from what I tried out, if we go back, fight some more fights elsewhere, do some sidequests, and equip new gear, then the hard battles can be approached with better preparation and eventually overcome. For that reason, I didn’t feel that any of the fights were unfair, because the game offered a lot of ways we can use at our disposal. However, the devs are going to release a new content update any time now and mentioned that it will introduce a difficulty selection, so it should be able to appeal to both casual players and those in for a more strategic experience. 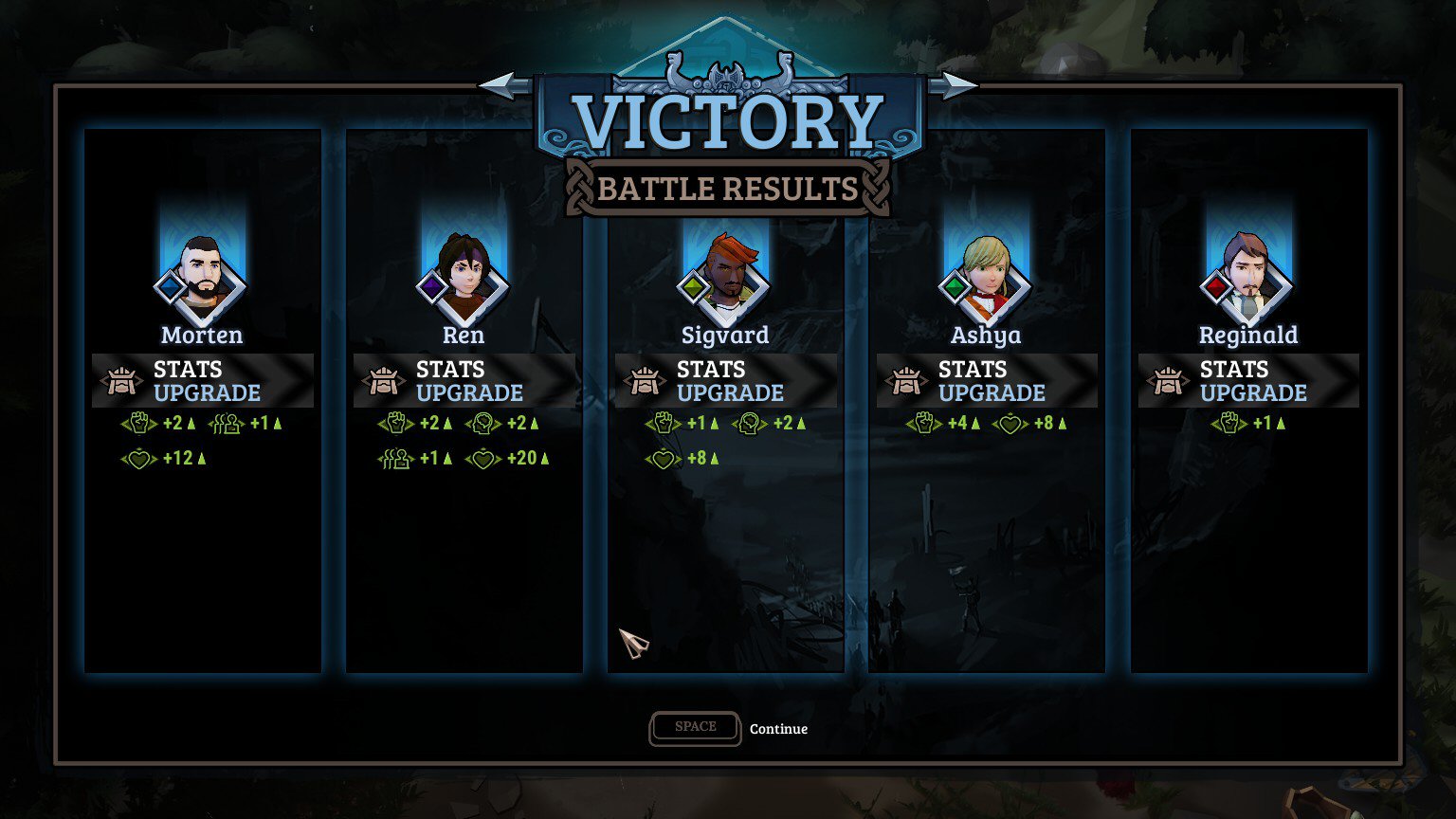 Most likely the thing you’d notice first about the game is its unique low-poly 3D visuals. The characters and environments have all been made with a lot of attention to detail. The environments especially have so much atmosphere in them, they make us feel that we are there together with the characters. All the battle animations are also nicely done, and the whole battle screen with characters moving around constantly makes each battle feel like it’s actually playing out live rather than characters simply taking turns. 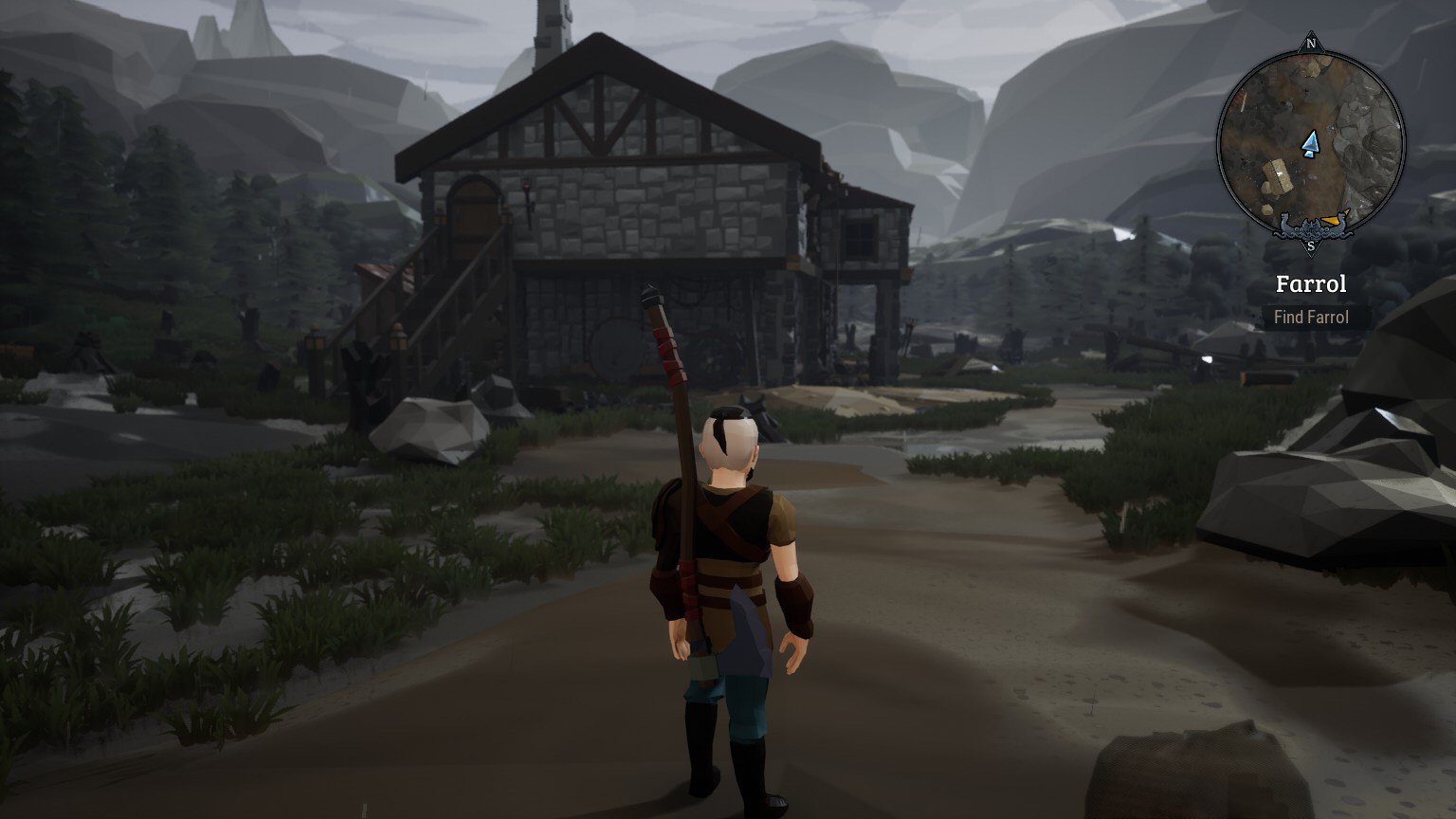 The interface and the menus are generally decent, although they could use a few minor improvements so to make it easier to get the right information and to navigate through them. The menus also have a quest journal so to let us keep track of all the quests, as well as a map of the area with all the points of interest.

Music and sounds are generally good. Music fits with the usual heroic fantasy setting. The dialogues are not voice acted, although the characters do make grunts, sighs, and occasionally short phrases. Most of the dialogue is quite simple to read through though as it’s casual and delivered two lines at a time.

The game is in an excellent state and presentation already despite being in early access. I’ve not come across any major bugs. Only a tiny few issues occurred with pathfinding of characters in battle and terrain hitboxes when exploring, which is very minor. It really is a well put together game already and it will likely get even better. 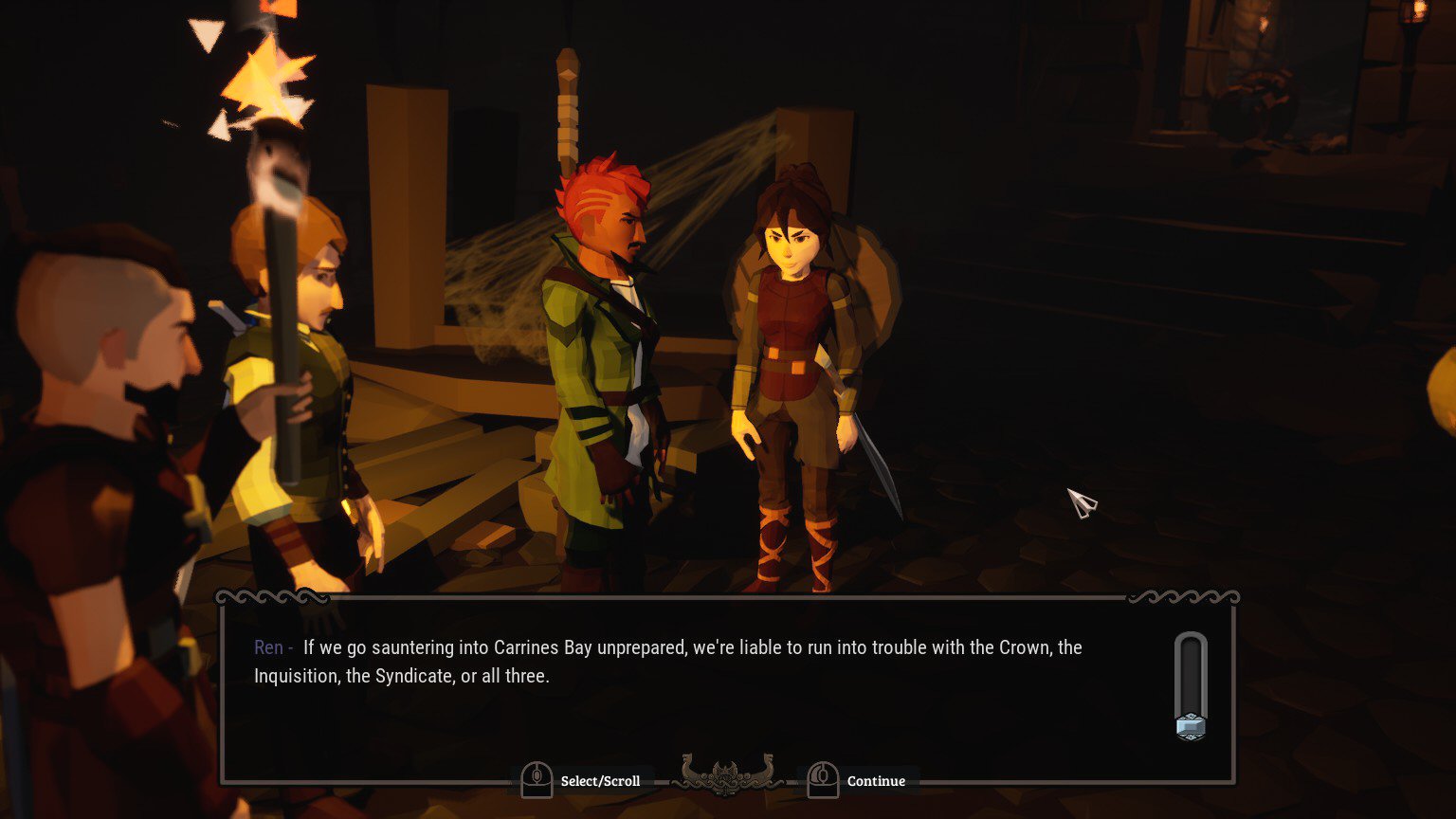 I didn’t know what to expect when I went into this game. From the trailer and other Steam store info, it looked like a decent game. However, after playing through the whole early access section, I can say it’s better than decent and it left me wanting more. I ended up getting interested in the game’s setting and story and found its tactical battle system to be very cleverly designed and enjoyable, even while cussing out loud at some of the tough bosses.

The devs are actively listening to the player feedback on the forums and are making regular updates. But even that aside, the part of the game that is done (about 6 – 8 hours) is already in a highly polished state. We just need to wait for the rest of it. Perhaps a bit of difficulty balance here and there and a few small quality of life improvements could be needed, but nothing major. Whatever the devs have planned, they’re clearly on the right path, so I am really looking forward to the future content updates.