Phoning Home is an interesting Indie open-world adventure that has an equal amount of strong suits and glaring issues. Ultimately it results enjoyable, but could be much better if some problems were addressed.

Phoning Home (PH) is a third-person open world adventure set on an alien planet. Players impersonate ION, an explorer sent by a race of sentient machines, in order to find more resources around the galaxy. His ship crash-lands into an unknown planet that exhibits anomalous proprieties and seems to bend the laws of physics. Stranded and damaged, ION will have to make his way through this unknown and hostile environment to find a way home.

1. Well crafted settings, with good visuals and variety.
The setting of PH is overall well-crafted, and has enough elements to make it feel alien, such as the numerous plants, growth and later on structures found in the world. Artistically speaking, there are quite a few memorable landscapes, as the game does have substantial draw distance and distance LOD. Each biome (desert, forest, etc.) feels unique and comes with its own composition, a factor that contributes to not make areas bland or uninteresting.

2. The proposed combination of genres works well.
Combining open-world, survival mechanics, shooting and narrative adventure is one thing, but making them work is not the easiest feat: the devs here managed to, however. Compelling exploration pacing is broken down by more quiet moments dedicated to lore or dialogues, while action sequences like combat are not uncommon – the survival needs keep attention high and boost the need to keep a steady pace.

3. Interesting story and lore elements.
PH uses mostly indirect narration and visual cues to tell its story, though directly spoken out facts won’t be lacking either. Alien ruins and environment details house a good amount of elements from which players can make their own conclusions while exploring. The story is not amazing and in certain aspects, falls into a bit of a clichè – though overall it’s more than adequate.

4. Rewarding exploration.
Resources, lore elements and even some secret locations are scattered throughout the vast open-world. Each new place will not only bring supplies, but also enemies to fight and maybe new revelations about the alien planet. There are some forms of collectibles too, for those interested in achievements – that however serve no practical purpose. 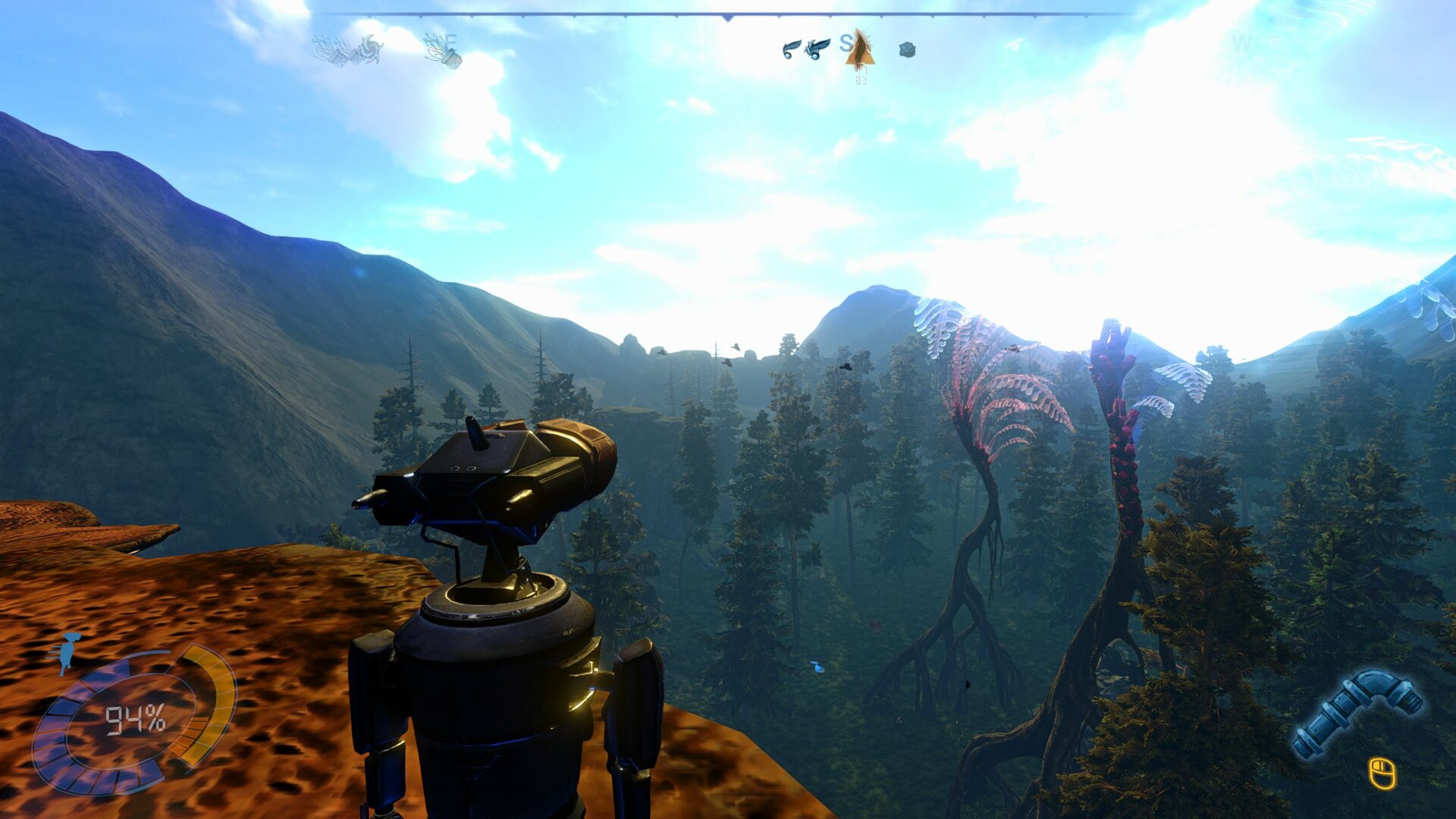 1. Noticeable level design issues for an open-world.
The level design in many cases just doesn’t cut it. Generally, this genre uses visual cues such as structures, debris or map layout to have players deduct the way to follow – doesn’t happen here. In some cases, players will find themselves totally lost in massive maps. Portals are scattered around, which are a fast travel method – however there is no way to know where they lead: this, combined with the absence of any map and survival needs, will surely lead to some frustration.

2. Survival mechanics are way too forgiving.
The survival component is almost never an issue. The amounts of resources found along the way and in each outpost, ruin or debris field is enormous – truly unbalanced, thus even those not very good at managing them, will always have quite a surplus. Survival mechanics never become a truly central gameplay mechanic, instead just a side annoyance at best.

3. Underwhelming character progression.
Along the path, ION will unlock several tools ranging from magnetic grapplers to anti-gravity field generators. Most of them, however, will only be used a few times if ever. Only a few select ones will be the “core” players will need frequently, and this makes progression less exciting, as soon most of the new tools unlocked will become unnecessary.

4. Poor companion artificial intelligence.
ANI, ION’s companion, can be commanded to follow, hold position or activate / deactivate combat mode. Problem is, in addition to her absolutely terrible mobility and poor endurance, she also can run in completely wrong directions, actually AWAY from ION for no definite reason, or get stuck in bizarre ways. Quite a headache. 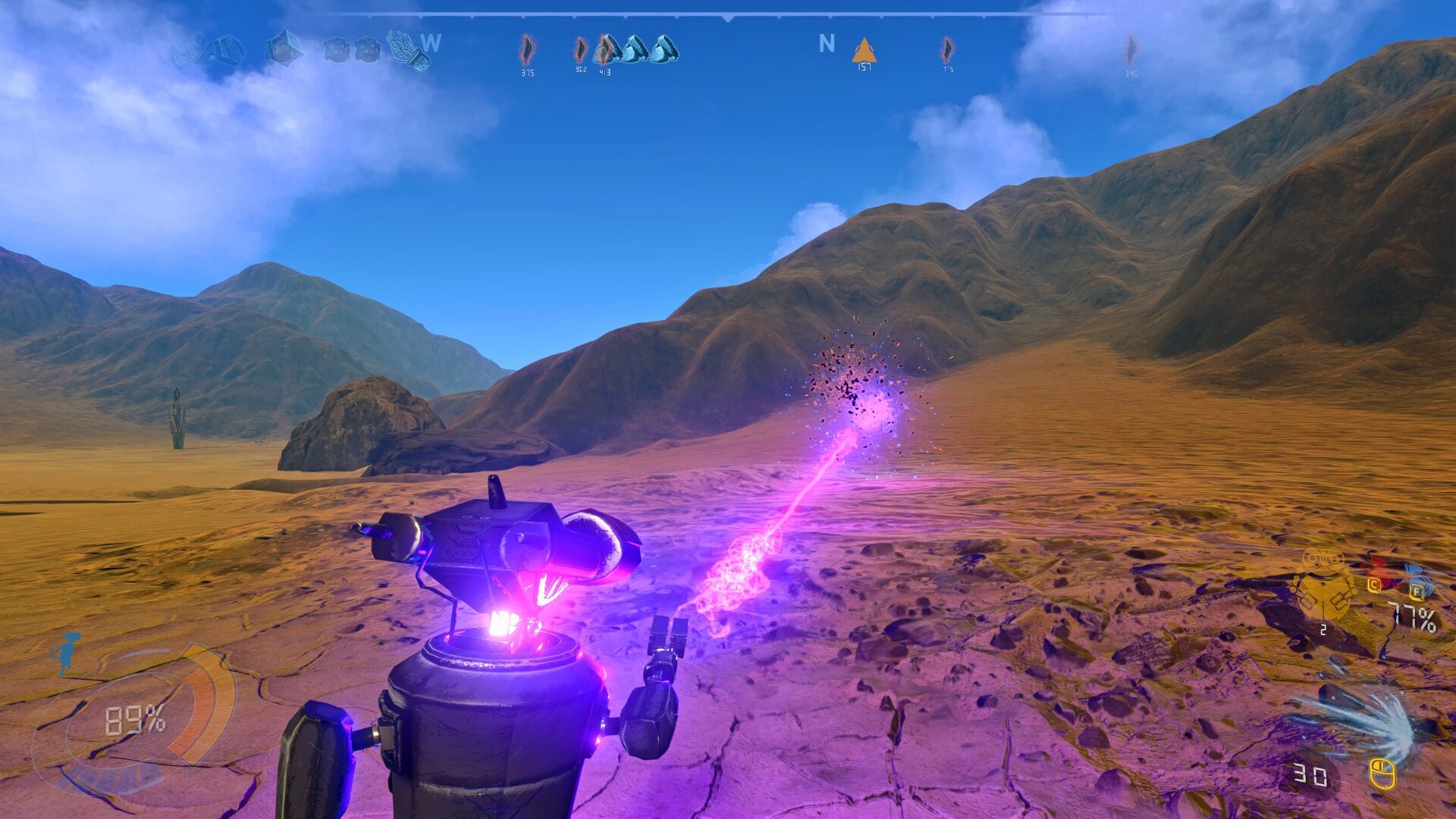 Exploration
Is performed on “foot”, using ION’s rocket propellant to move around. Sprinting is considerably faster, but will consume energy passively, while flashlight is free. Each environment is massive, and features several obstacles such as mountain ranges, rocks, pits and even enemies. Exploring will lead to discover resources, which after the first one analyzed, will then be highlighted on the Radar if nearby – looking everywhere is rewarding in terms of loot but also, lore sometimes. Portals allow instant travel across large distances, only, one can’t know where they lead, so they’re a bit of a gamble sometimes.

Combat
Is simplistic, and performed using either ANI’s plasma gun or ION’s photon blast, which work in the same way (only ANI is controlled by AI and has unlimited energy). Shooting costs energy, though not much as the average foe will go down in 5-6 shots, and a full bar has 60+. Enemies can also be deceived and evaded using various tools, though it’s just more practical to blast them, also less expensive, as they’re never much of a threat.

Survival & Crafting
Are performed through a simple crafting menu, that displays currently available recipes along with the needed materials. ION can carry initially 10 of anything, upgraded to 20 if the correct module is crafted. Keeping consumables and resource supplies high is important, though not much of a challenge given the great amounts of materials found in the world. ANI needs to be provided repairs, coating and movement assistance on a regular basis due to damage and design issues with her robot model, so she will be quite a hindrance for most of the game – alas, necessary for the story. 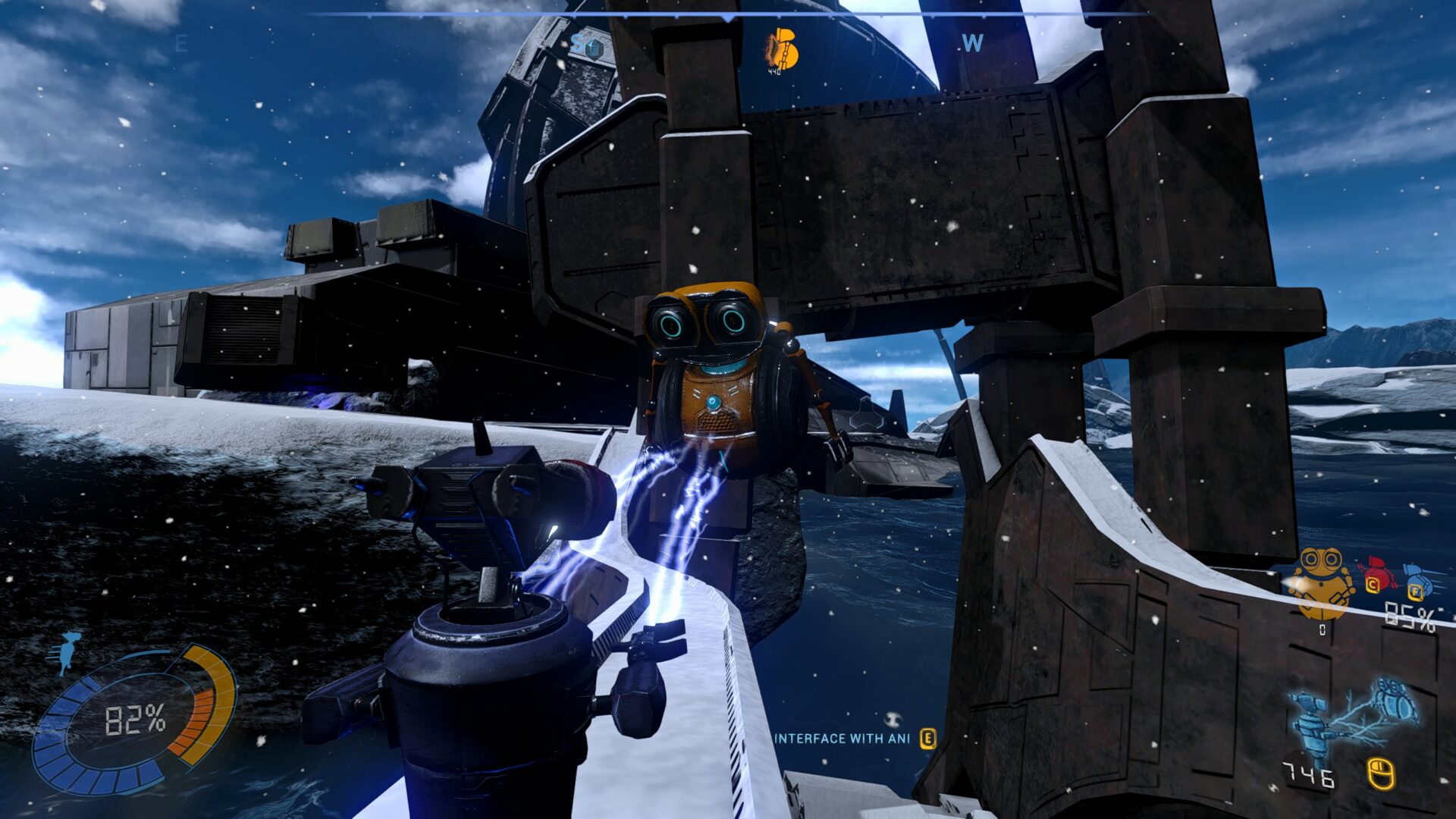 It took me around 8 hours to finish Phoning Home, while taking time to explore most areas and collect resources. The price of 10€ is totally fair for this content amount, so for the overall decent quality I’d suggest buying for full price – especially to fans of narrative adventures and exploration-focused games.