Kill with style, loot with boredom.

When I played Foregone for the first time, I thought I was playing a science-fiction take on Dead Cells without the rogue-lite elements. Indeed, the music, the lighting, and even the bright 3D models and their animations feel like Motion Twin’s title. And there is nothing wrong with that, as rogue-lite games are not everyone’s cup of tea. Instead, let’s see whether we can enjoy this linear Metroidvania!

Foregone is pretty light on story elements and won’t bore you with cutscenes. Just know that you are sent to take down big bad “projects” gone wrong, and you will have to clear a path through hordes of monsters waiting for you patiently on their platforms. To do so, you are very nimble, as you can mantle on platforms, double-jump, and dash right or left. The movements are very satisfying, and you can combine them with a gun or abilities that both recharge as you hit enemies with your melee weapon. While there are a bunch of offensive abilities, the most useful one is a healing power, that lets you soldier on despite all the dangers in the forms of enemies with poison gas, rifles, lightning staffs, and so on. Just like for the guns, there are different classes of melee weapons, such as swords and scythes, each with their own attack animations. Which can be frustrating: the class with the higher damage-per-second also does not hit in front of you instantly, leaving you wide open until the animation catches up with your intent. Sure, you can learn to master the animations and distances, but attacks that connect faster would have been a lot more satisfying to play. Keyboard & mouse worked better than a gamepad once I rebound W to jump instead of the spacebar. Neither the mouse nor the second stick are necessary to aim, as the game features a strong auto-aim to smoothly kill targets while moving around. 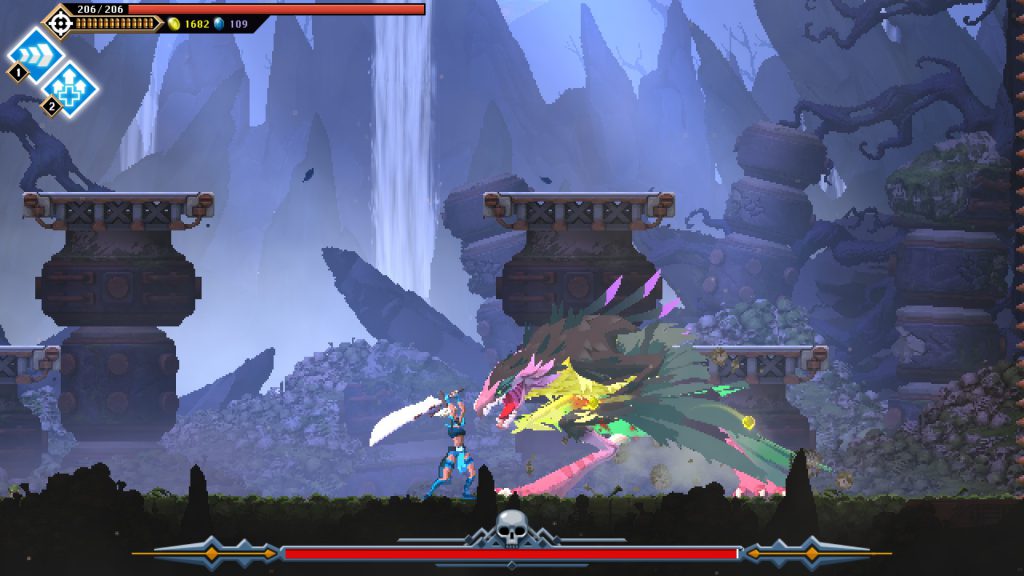 Something that surprised me after killing enemies was the sheer amount of loot dropped. I was spending my time mashing the E button to pick up all this useless junk . Even secret rooms yield loot that is very rarely superior to the rest of the junk, so most of the items picked up are simply turned into gold at base camp. Abilities can be upgraded, sometimes for ridiculous 1% or 2% boosts. Thankfully, there are sometimes more useful perks, such as poison or explosives, but let’s just say that there is a lot of busywork dealing with useless numbers. 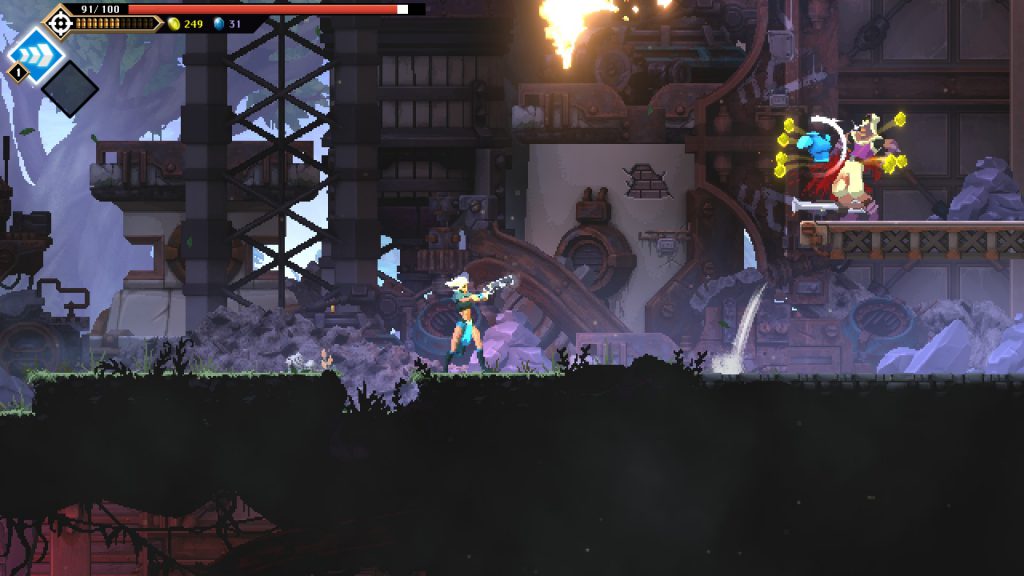 Where Foregone really falls apart is in its level design. Although the backgrounds are gorgeous with beautiful colors, the foreground platforms are just dark horizontal bars. You can see from here or the screenshot below representing a section of the map that the levels are a maze of simple horizontal platforms. And since enemies just patrol their basic platform without leaving it, finishing a level becomes the tedious and monotonous act of cleaning each platform after the other. There was no exciting exploration, no change of tactics, no new ways to open up combat. The Metroidvania element is only there as the occasional possibility to teleport back to base, but the whole adventure is a linear affair. I have nothing against linear games, but that’s exactly the problem here: I can’t forgive monotonous levels in a hand-crafted game. Thankfully the game isn’t too long, just a few hours, except if you want to replay in harder difficulties or tackle the additional challenge missions that require completing specific challenges under a time constraint. That might get your blood pumped, but it wasn’t enough to keep me engaged. 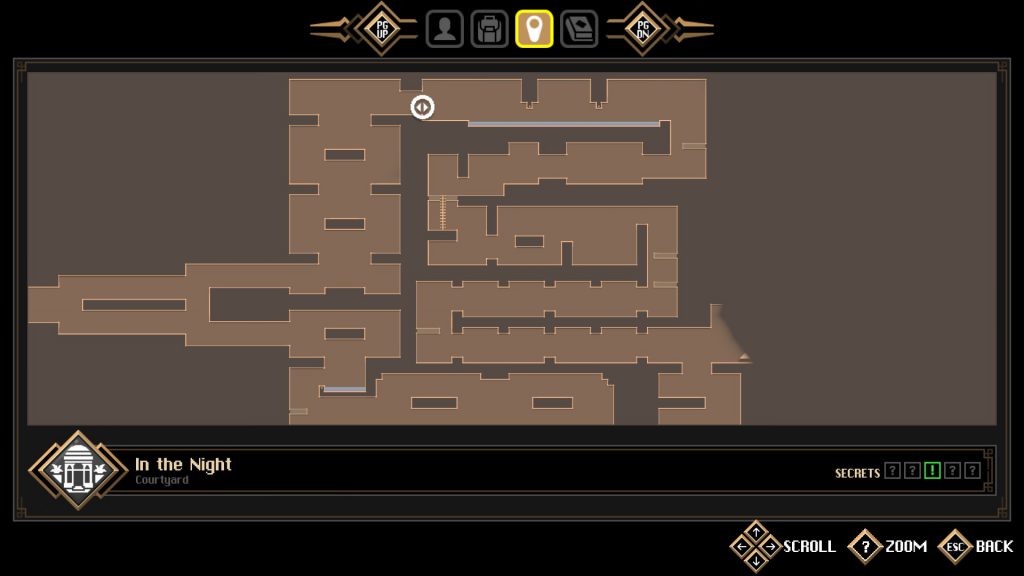 Foregone has a great combat core and empowering navigation abilities, but the levels make the situations too boring and repetitive. True Metroidvania elements are not there, sadly replaced by insipid loot that is not going to draw the crowds into a frenzy. Good try, but quite not there yet. Only for people who want to ease into an action platformer that is not as difficult and unforgiving as the vast majority has been lately.