Plenty of games take us through a hero’s journey. We start off as small, unassuming folk and grow into a powerhouse ready to take on the big bad evil guy at the end. It’s a formula I’ve gone over hundreds of times over the games I’ve played in my life (many, so many), and I’m no saying that’s a bad thing. It is, however, always refreshing when a game opts to spin that journey and start it at a different point. Good Night, Knight does just that, and does it in a way that makes me curious for further story. Right now, the game is still in early access, which means that we’re waiting for updates to potentially see more narrative– though the core of the game really does lie in the actual gameplay.

While I touched on it a little bit earlier, Good Night, Knight starts after the traditional hero’s story. After a brief gameplay tutorial sort of intro- really only as brief or as long as you can last in those dungeons- the plot hooks begin. Or, rather, a vague sort of explanation. Once you “die” you find yourself falling down from a tall tower. Narration happens, something that lets you know all those traditional hero roles have already been completed. The evil has been banished, the princess was rescued, the land is at peace, and the adventure is over…maybe. 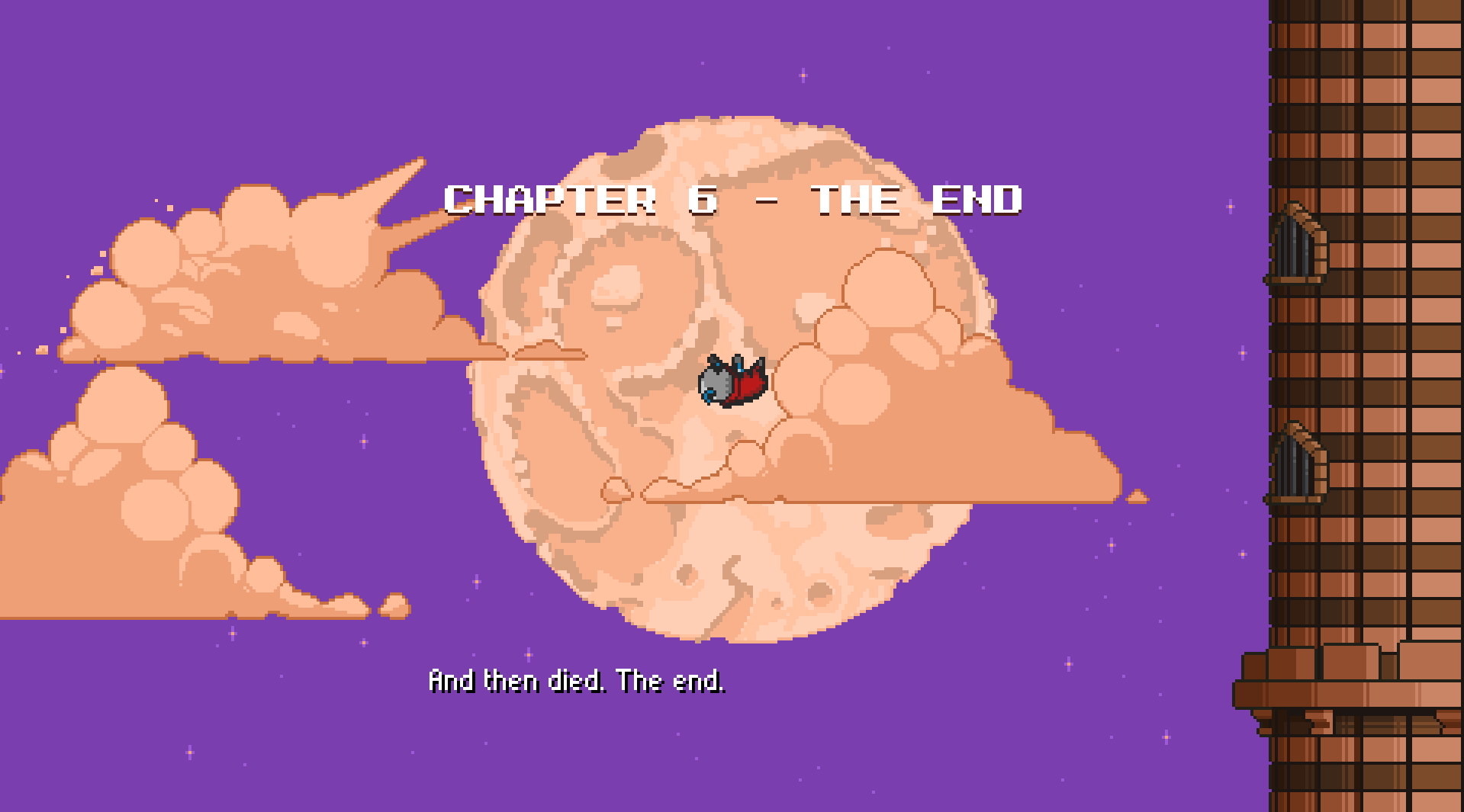 After further progression, the narrative continues. Did they insinuate the hero died? Just kidding. Actually, the hero survived, and we establish that our narrator is somewhat unreliable, provided the delivery is funny. Our knight interrupts a narrative that an elder is having with another hero, one involving collecting five hallowed pendants to save the world again, somehow. The arrival of our main character means the other knight is no longer the main hero, something they’re grateful for. Initially, our main task is to fix the elevator, and then from there it’s to dive as deep as we can without dying to make ourselves stronger and gather gear.

While the game is in Early Access, there’s not a tremendous amount of continuous plot. Still, the characters that we meet are colourful and funny, something I would love to learn more about. One of my favourite things in games are colourful merchants with plenty of personality, and this game gives us two of those.

The pixel graphics in Good Night, Knight are beautiful. The model used for our little knight is adorable, and plenty of the enemies are as well. Big skeletons, little skeletons, thieves, giant snakes, some sort of cougar, or panther, or– the list goes on. Each one is different enough from the others in silhouette and colour palette to be immediately notable, making it easy to size up the threat level once you understand their moves. 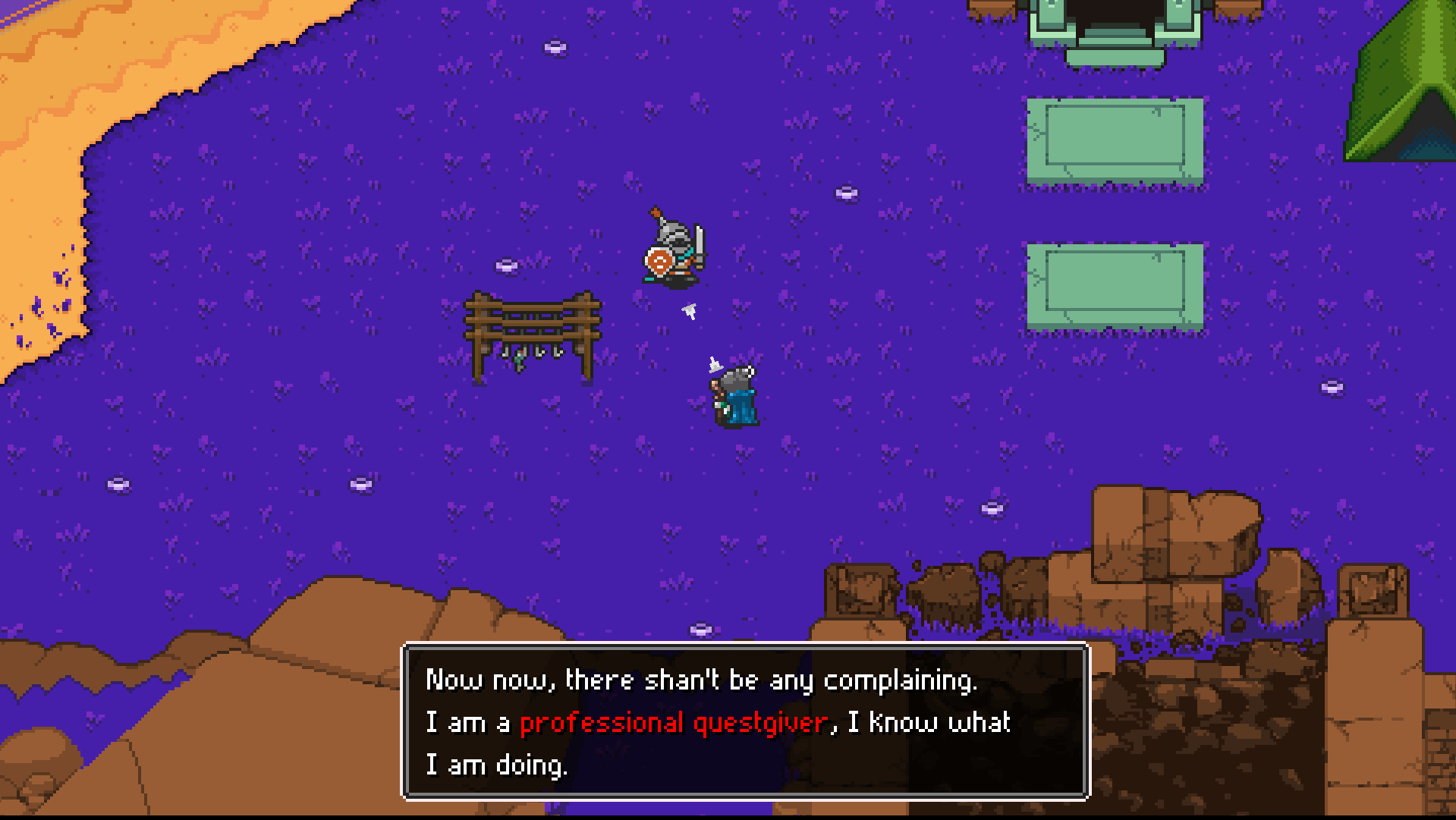 Here we are, the meat and potatoes of Good Night, Knight. I might have gone on about the story, but this game really does expect you to be dungeon-diving more than anything else. Something that immediately sets this game apart from other procedurally generated dungeon divers is the stealth system available. One of the first methods to progress is a stealth approach, one you can activate by pressing R1 (if you play controller like I do). Your character regardless of whether or not you’re stealthing has a sight cone at all times, which reveals enemies and items based on where you’re facing. Peering around corners, sneaking up on enemies to grab them or attack them, and trying to navigate through a monster-invested room to run to a different one are all made more thrilling this way.

Another core component of the game is the item system. Sure, you’re running through the dungeons and you’re killing things, but you’re also trying to get gear. Each piece weighs a set amount, and you have a limit that you can bear at the beginning, which means that you can only equip so many pieces. Or at least, that’s the case until you fight enough enemies to gather enough EXP to level up your gear. This is something that happens each time you rest, and the max level for each gear piece sets the weight to 0, which means you can equip the items forever, and which means you’re wanting for more and more gear to improve your Knight. Once you meet your merchant friends, you can trade pickups you get from monsters to get different gear that provides different effects, like making your sword longer, improving how quickly you move while you’re stealthed, and so on. 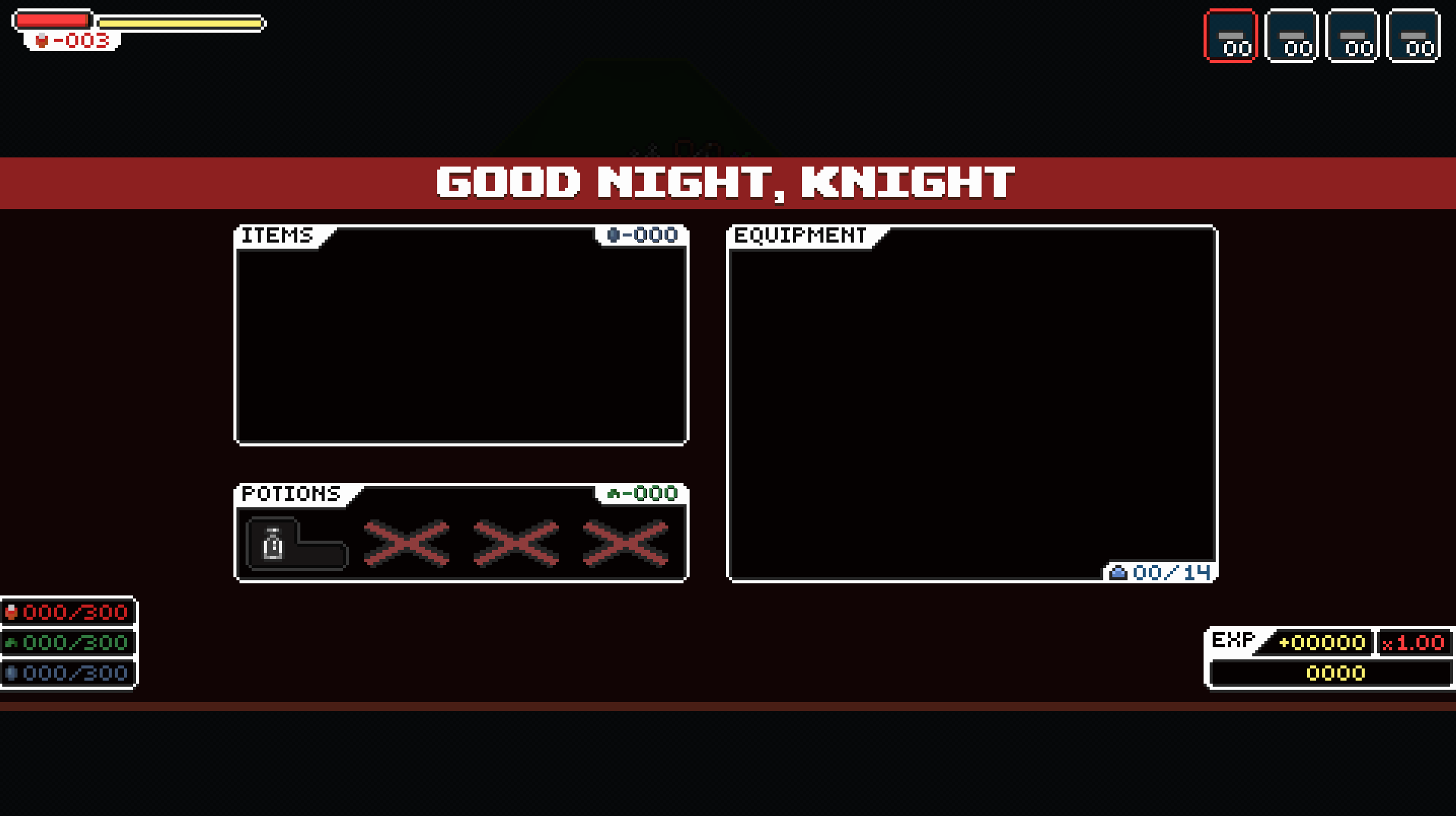 Besides monster parts, there are other pickups you can collect, in a blue, red, and green colour. Red is food, assists with healing or increasing your health past the 100 initial maximum when you rest. Blue is provisions, allows you to charge up certain items you’ll get that have limited uses, like portals you can set on the ground to bring enemies to in order to…harvest even more of their parts. Green is ingredients, which allows you to restore and charge potions, which can help you see through walls, improve your stamina, and more. 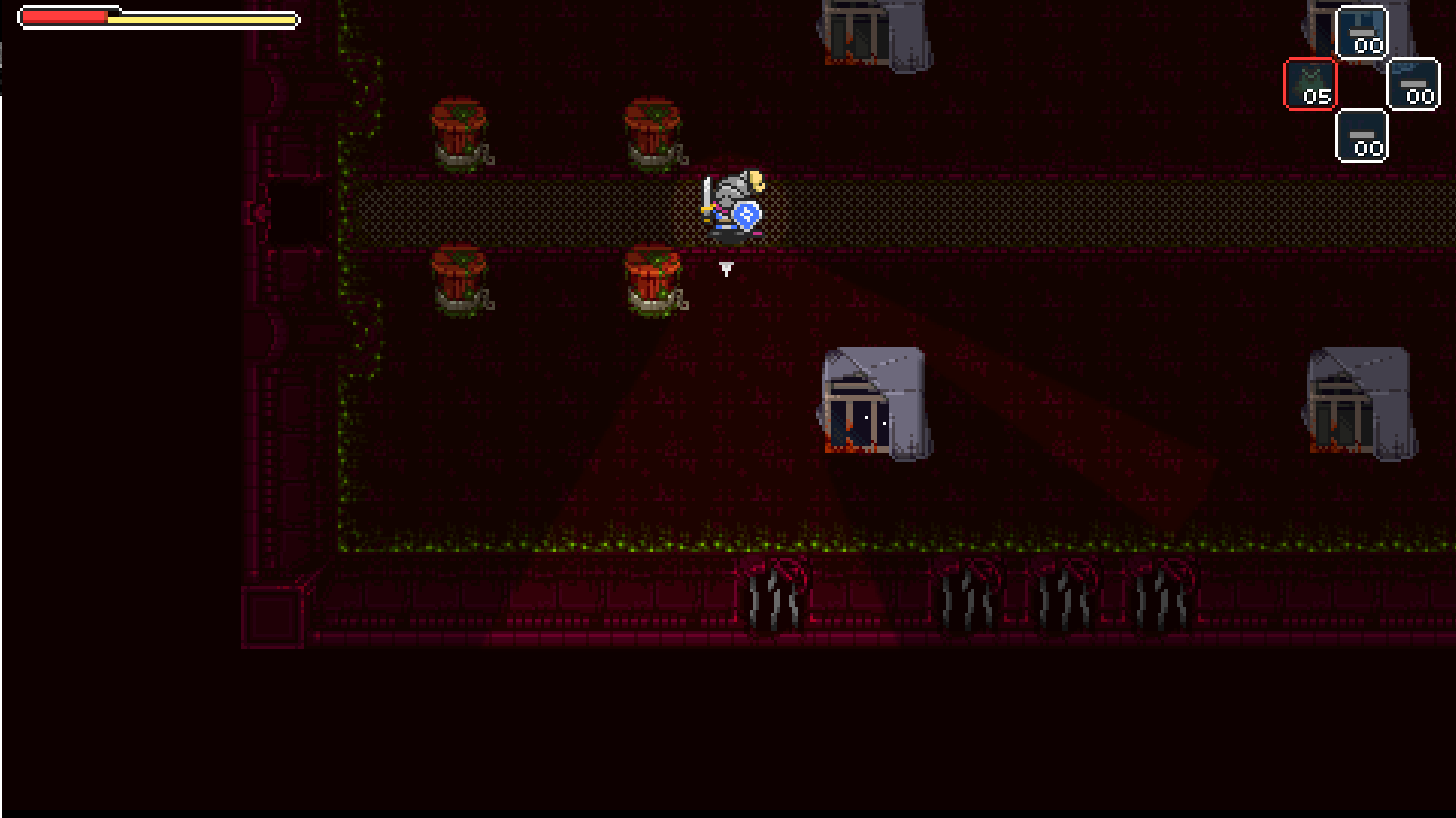 Different areas of the dungeons have a boss at the end, and I’ll keep them secret, but the second is particularly grand. The battles are fun and can require a bit of luck to ensure you approach with the most health and helpful items possible. Status effects are the last thing to keep in mind, as you can be set on fire (put it out with water), get poisoned, and be hurt by ghosts that are intangible but tail you throughout the level.

There are a few other things that I found charming about the game, like being able to kick the skulls of your enemies around, or the fact that your knight will get nauseous and puke if you spin around too quickly for too long. Additionally, while I played the game solo, this is a split screen co-op game, with the option to add a second companion knight once you get past the tutorial. 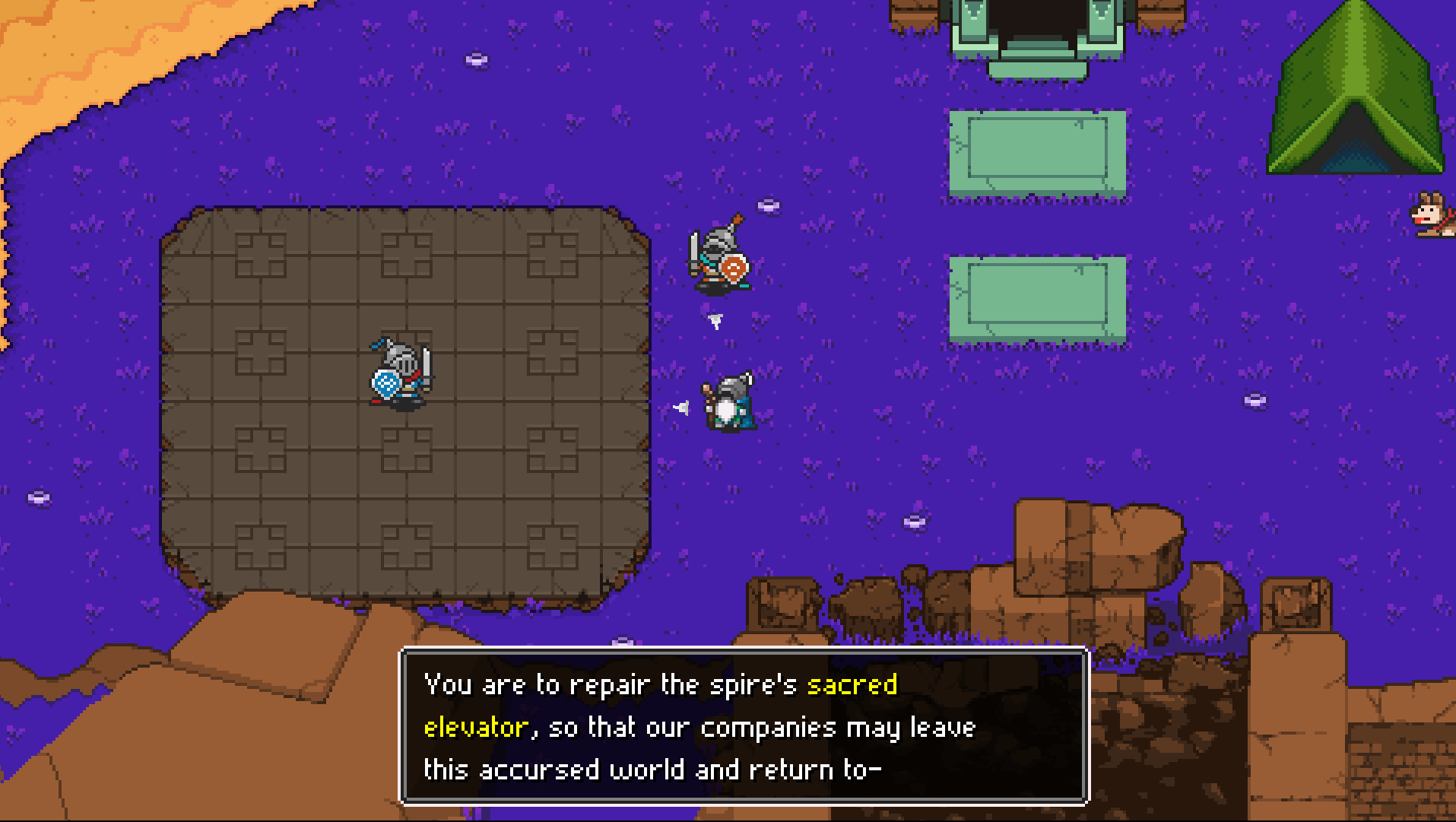 While Good Night, Knight is an early access game, it’s already quite fun. There’s a sense of polish behind the content that’s currently available, and if you’re the sort of person that enjoys doing completion in games, there are tons of items to try to get from those monster drops. Farming increases playability, and as updates drop more levels will become available. I’m going to be checking out what Good Night, Knight adds beyond this review, simply because I enjoyed it so much.