Earth Analog is definitely an ambitious single-dev Indie space sim, that manages to achieve a lot especially on the technical side. Despite its notable successes in some fields, lack of polishing, terrible optimization and gameplay issue ultimately make this only a sufficient title.

Earth Analog (EAN) is an experimental space sim title set in the far future, in our own galaxy. Players impersonate an astronaut involved with the Eurisko space program, which aims to find a planet with equivalent characteristics to Earth (hence, the game’s title). Many were sent to the depths of space before the protagonist, but no one returned. Tracing back the footsteps of their predecessors, players will pass through unfathomably alien worlds, read mission logs, solve puzzles, avoid unknown dangers – with the ultimate goal of finding the Earth Analog.

To boldly go where no one went before
Thanks to the highly experimental visual techniques employed, this game manages to create landscapes with truly impressive geometries and details. No other title of the space sim genre ever managed to create alien worlds on this scale and with this complexity. Each system looks and feels unique, ranging from alien constructs spanning thousands of miles, to planets where biologic, inorganic elements meld together and much more. Never knowing what to expect after the next warp jump can be quite an addictive feature, to those who enjoy exploration-based titles.

Another system, another challenge
Each planet and location is home to unique obstacles, physical proprieties or enigmas. More often than not, it will be necessary to figure out how puzzling alien devices work, or how to effectively counter a dangerous space anomaly. All this is done with minimal or no hand-holding, which is a double-edged sword, as at times what to do next results obscure to understand. There will even be certain “boss fights” against automated security systems, armed with lethal intent.

More than just a mission
There’s much more to do than “just” roam around avoiding space anomalies and reading mission logs. Artifacts, each with a matching Upgrade Pyramid are present in pretty much every system – taking extra time to deliver the requested artifacts will result in powerful upgrades for the ship. Coordinate Pyramids may reveal hidden worlds, enabling a warp jump to them to uncover more mysteries divergent from the main questline. Maintaining the ship with repairs, scavenging materials and engaging in multiple minigames for drilling or repairing are all daily tasks, as well. 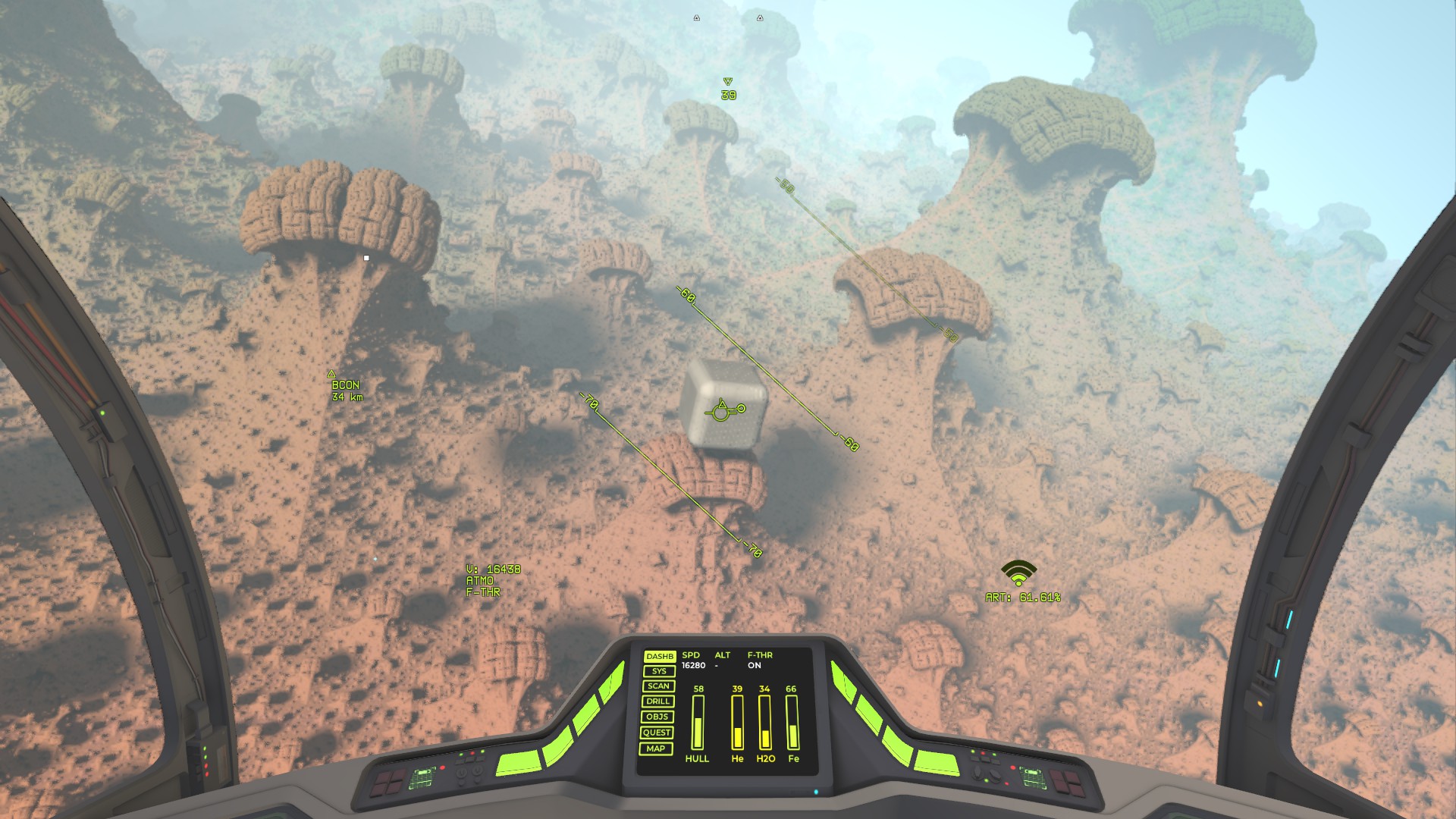 But can it run Crysi- I mean, Earth Analog?
This game right here, is the Crysis of space sims. The “raymarching rendering” technique, while innovative and impressive, exact a tremendous toll on even the best hardware. On my 2080Ti and 3900X, I had to scale back resolution to 1080p and enable Dynamic Resolution as well to obtain acceptable framerates (average 30-40 FPS and not always!). This is one of the heaviest titles I have ever played, optimization is nowhere to be seen and the minimum requirements are barely enough to make it playable. On top of this, roughness and lack of polishing are evident.

Boy, what a rough start!
Despite becoming quite interesting later on, the start of EAN is really underwhelming and brutal for several reasons. The tutorial doesn’t provide enough information about certain mechanics, while the punishing flight model will be hell to handle, for any player not already experienced with space / flight sims. In addition the first few hours are rather bland, in comparison to what is found after. This might discourage many players and make them quit early on – something I felt an “instinct” to do as well – but didn’t, fortunately.

Lost in space
Lack of hand-holding is fundamentally a good thing in games, however only if done with wisdom. In some instances with Earth Analog, puzzles and situations spiral down to an extremely obscure level, with players being left without any guidance or indirect reference on where to go next, or what to do. Just a little more guidance really would do wonders in some of the most punishing puzzles or action situations. Expect to spend large amounts of time figuring out puzzles or anomalies. 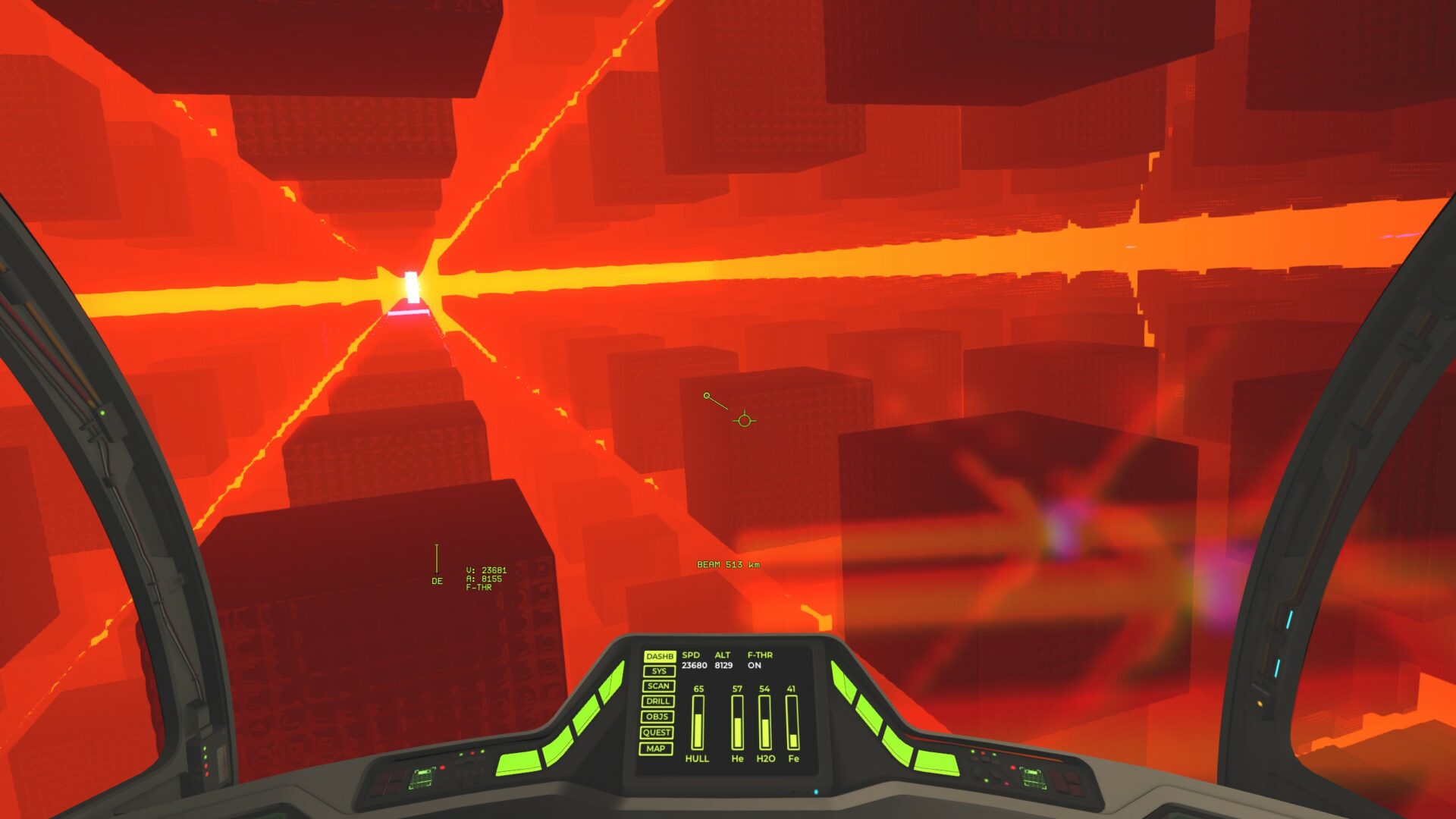 Exploration
Is the prime activity, and is done by piloting the ship following a newtonian, realistic flight model. Tools such as the Material Scanner and various signal detectors are regularly employed, manually, to find critical resources and signals to progress the mission. While flying, a regular and boosted modes are available, while factors such as atmospheric drag, winds, relative velocity and inertia are always to be considered. Don’t expect an arcade or forgiving flight model. Dark Energy can be harvested from planet surfaces, and used to achieve extreme speeds for a short time, or longer in some cases. Landing is a risky but necessary process to gather materials and beacons, mastering it requires time.

Ship Management
Is done via a series of interface panels, navigated manually with arrow keys and keyboard (no mouse!). These display ship status, resources stored, and inventory of cargo hold. Parts of the ship can eventually break and get damaged, repairing them involves a relfex-based minigame other than resources. Impacts, environment conditions or other factors can damage and even destroy the ship, triggering a reload to the last successful landing.

Minigames
Are mainly done to obtain upgrades, materials and repair the ship. Artifacts need to be found using a special scanner and delivered to the correct Pyramid with a landing. Drilling for minerals and repairing both involve a reflex based minigame where pressing ENTER at the correct time will yield better results, otherwise the process may also fail and yield nothing at all. The speed and complexity of such minigames can be raised in exchange for better bonuses, such as more minerals or more repairs – a risk-reward trade. 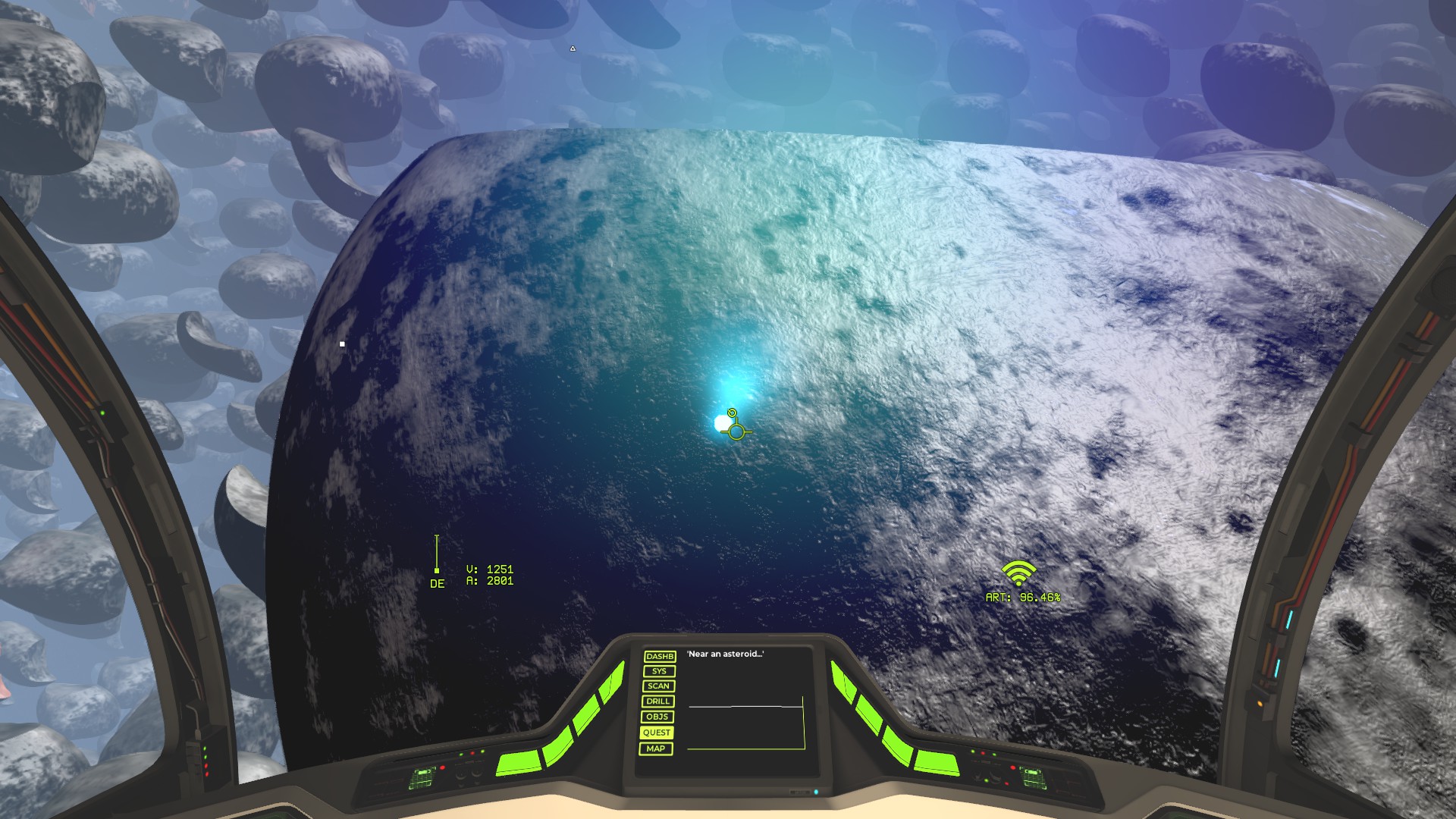 Critical Issues
– Extremely inconsistent performance, ranging from acceptable to unplayable depending on the situation.

Other Issues
– Clunky, unreliable flight model and controls: even those experienced with the genre will struggle with them.
– Evident lack of polishing and refinement in multiple fields.

The length can vary greatly for each player depending on approach, Devs officially stated that “the campaign takes around 25 hours”. The price of 20€ is fair for this content amount, however the lack of polishing, technical problems and roughness of the gameplay design heavily penalize this title. This is NOT a game for everyone: my suggestion is to carefully consider if it’s something you might enjoy or not, and also wait for some patches before buying.