We’ve destroyed the world a million times. It’s time now to save it.

Plague Inc: Evolved is a game that really exploded in popularity ever since the current pandemic started, although it was already well-known for a few years prior to it. I already covered in my review last year on the details of gameplay, but in essence we play as a disease, and our goal is to evolve, adapt, and eventually to eradicate humanity. The game has been getting frequent updates and new content over the years, and this year, the devs have presented us with the Cure mode expansion – to save the world from a pandemic. According to the devs, this DLC is free for everyone with the base game until COVID-19 is under control. 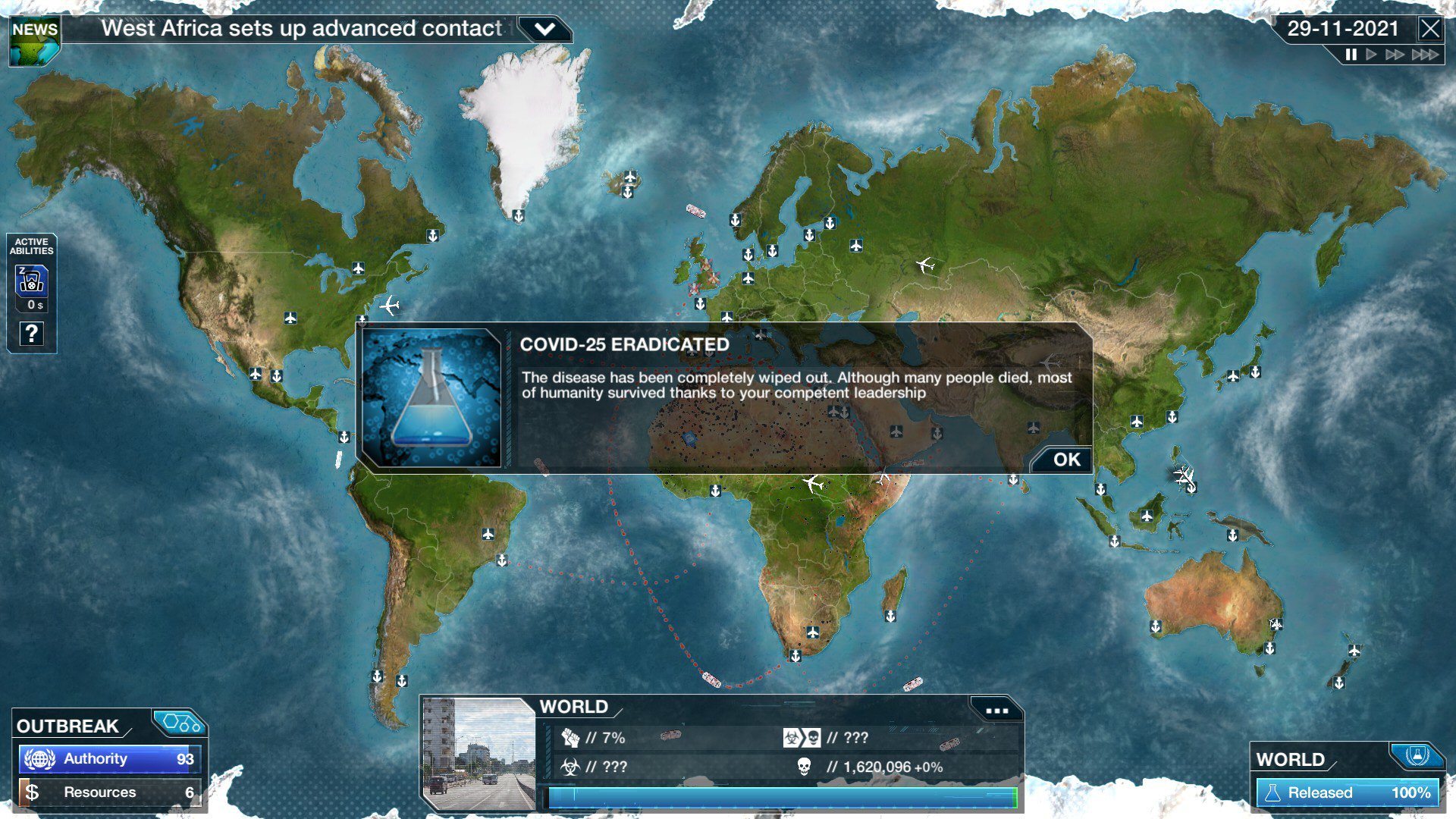 So, what has been added in this cure mode DLC? Well, a whole new game mode really for 7 of the disease types the game has had already. This game mode is quite significantly different to the regular mode when we play as a disease. Mechanically, it involves a very different approach. This is probably the biggest content update the game has had to date. This of course comes with a number of Steam achievements. Let’s take a deeper look at the mechanics and gameplay of the cure mode.

Whereas when playing as a disease, we have to spend DNA points on getting new symptoms and modes of transmission to infect the world and evade human cures. Now, our goal involves keeping control of several important factors – the disease infection rate, the disease fatality rate, the public compliance, the funds we get, and of course our authority. Our authority is arguably the most important resource, because all the other factors will affect it, and ultimately, if we our authority drops to zero, it’s game over. 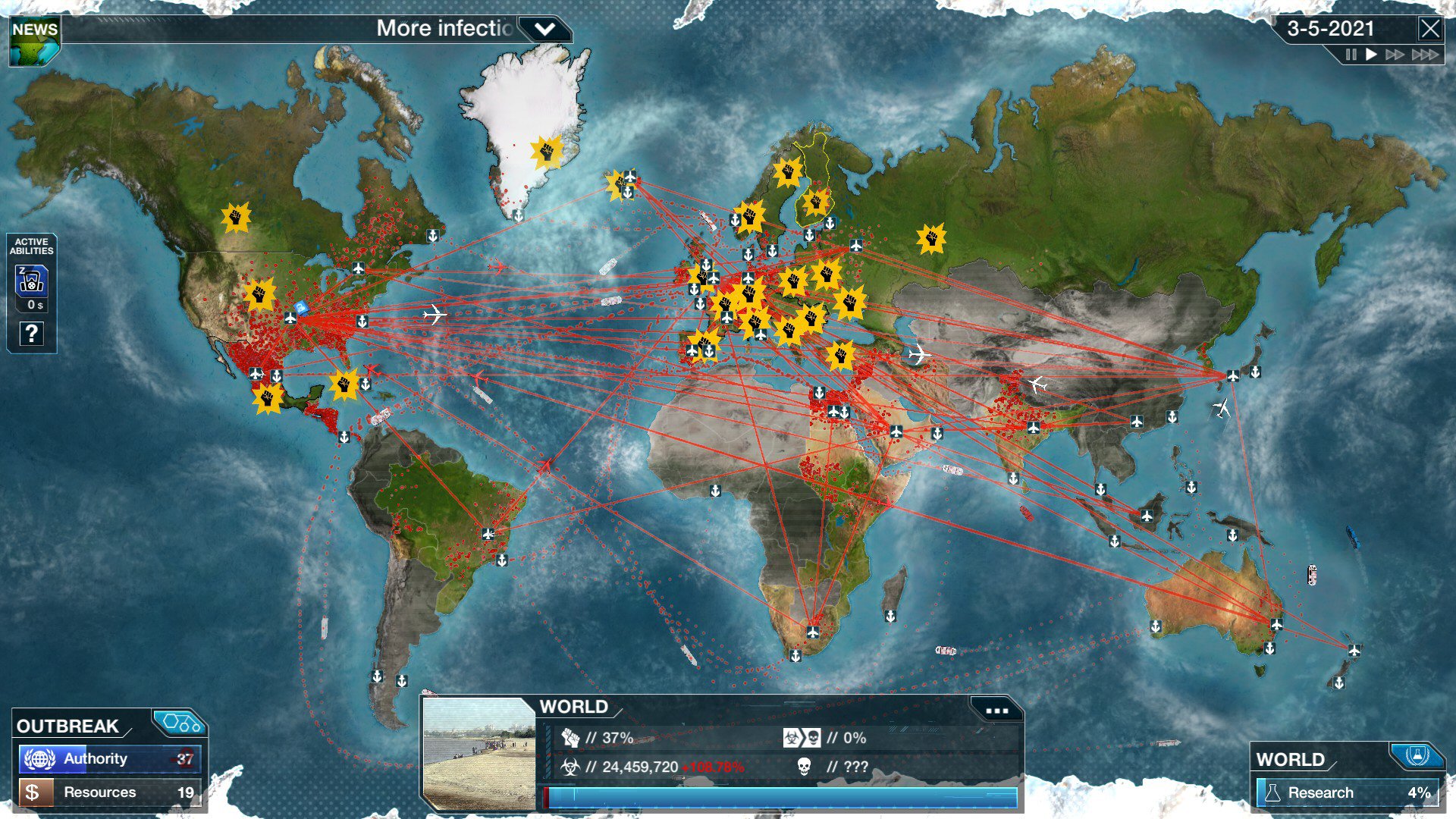 Just like with the disease mode, we have the world map that shows the spread of the disease and other events in real time, and we have our upgrades menus which show what we can do. The three main upgrade tabs are: Operation, Response, and Quarantine.

Quarantine involves lockdowns and border closures which we can activate and deactivate at any time separately for each continent (although we need money resource to activate them, while deactivation refunds us some money). Response consists of various upgrades to help us reduce infection and fatality rates – things such as improvements to PPE, better hospital treatments, track and trace system upgrades, and better border checks.

Operation is perhaps the most important upgrades tab as it includes some of the key features, such as authority upgrades, support schemes to reduce public non-compliance, improvements to mobile field operatives, vaccine research, and also any skills that are unique to the specific disease type we’re facing (for example, when going against Fungus, we’ll have the option to spray the whole world in anti-fungal chemicals to reduce infection rates everywhere, or if we’re dealing with a Nano-virus, we get options to hack it and weaken it in some way).

There are two ways to win – either to reduce the infections so much that there are no new hosts present and all infected hosts have either recovered or died, or to research and manufacture the vaccine. This opens up different strategy routes of how to manage the pandemic. We can try to focus on reducing infections and deaths as much as we can and wait for the cure, or we can rush for the vaccine by putting all our upgrades into that and getting it out before the disease has killed too many people, or we can put the whole world on lockdown and send monetary aid to any non-compliant countries, or we can try the more questionable approaches… 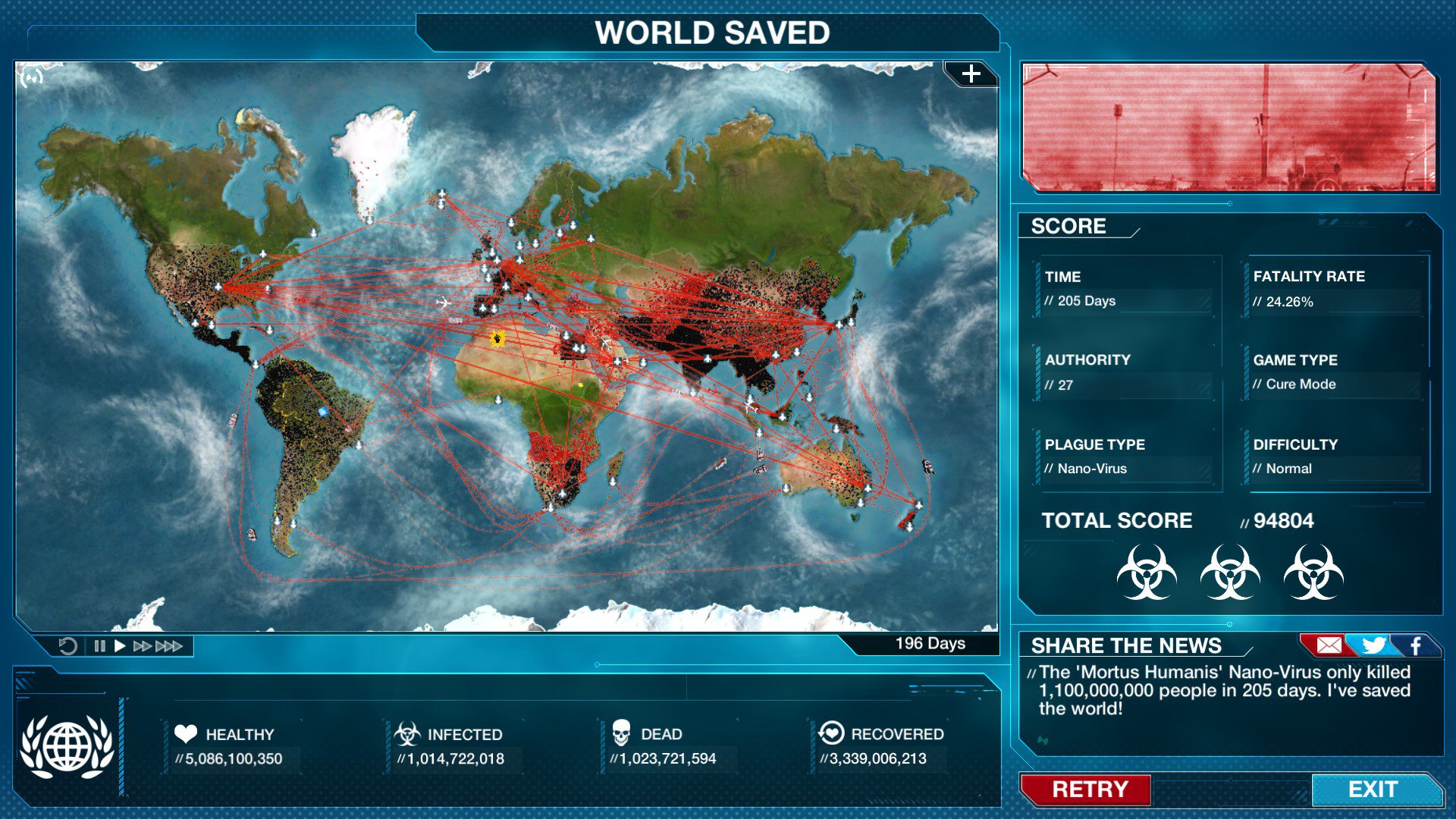 This is what impressed me the most about this cure mode. It’s not just given us a job to beat the disease on by-the-book basis, but also provided questionable ways which could happen in reality (and many indeed have happened in some countries during the current pandemic). These ways include: spread fake news to shift the blame away from oneself or censor opponents – this freezes the authority and stops it from dropping if we really messed up; bypass vaccine safety checks and waive liability – this may speed up the vaccine development or could backfire and actually set us back; force hospitals to focus resources on saving patients with highest chance of survival – this reduces the fatality rate numbers; and so on. All these methods will eventually raise non-compliance though as the public realises how rotten our authority truly is. You can even let the disease roam free and kill 90% of the world before infection rate drops to zero due to lack of hosts, and if you can protect your authority during that time, you will win. 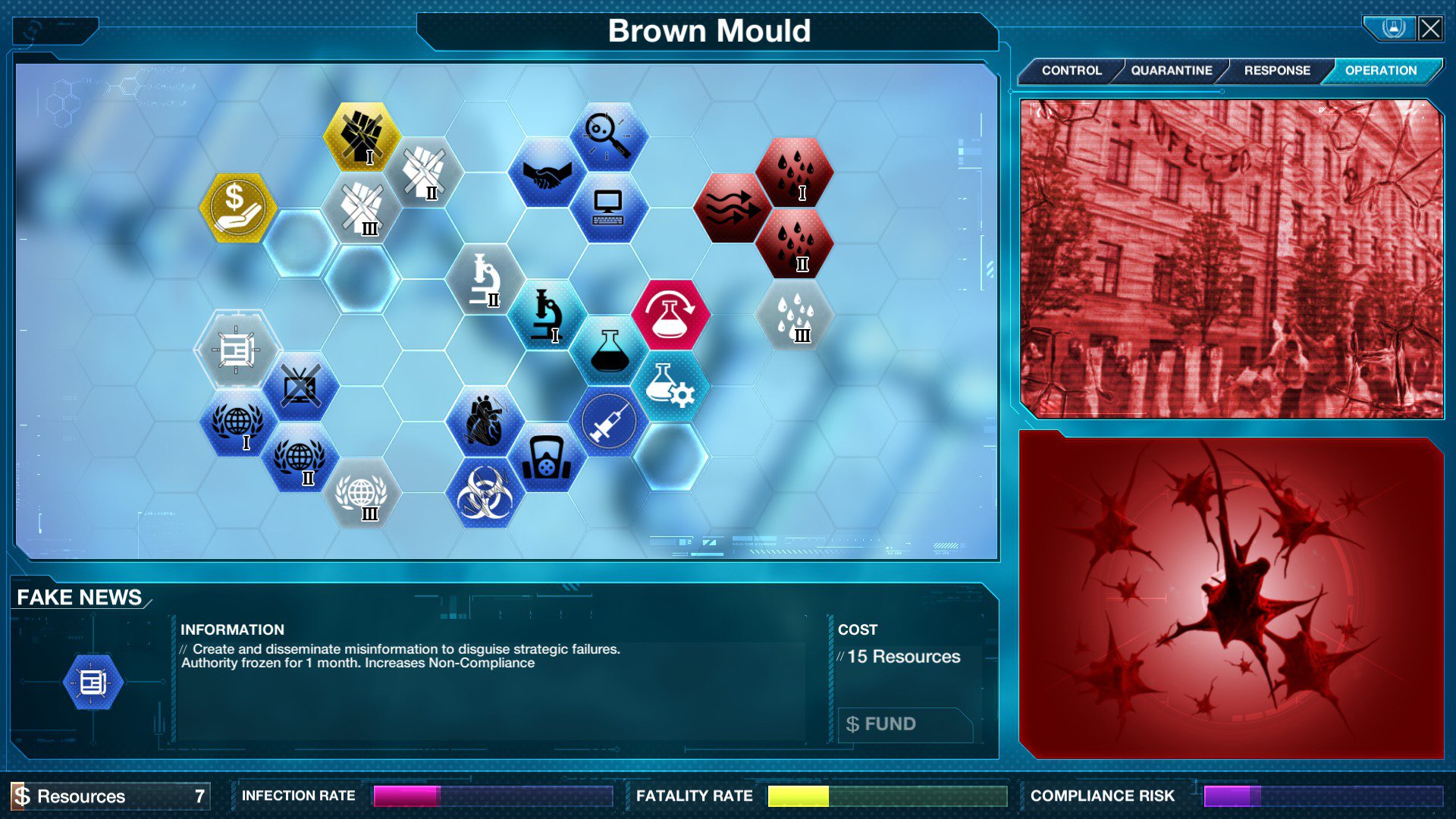 As far as difficulty, there is a fair bit more going on in this mode than during the regular disease mode, and we have to micromanage more things. This could explain why many people on Steam forums have found cure mode harder than the regular mode. I personally found it to be well-balanced for the most part on Normal difficulty, with the exception of a handful of disease types that felt like big difficulty spikes. Whereas curing Bacteria, Virus, Parasite, and Prion isn’t hard at all on Normal mode, trying to cure Fungus and Nano-virus will likely cause you to restart and reload a tonne of times, and don’t get me started on that nightmare out of hell that is the Bio-weapon. Most of the difficulty comes from managing our authority, because if there are too many infections or deaths in latter stages of the pandemic, our authority will begin dropping non-stop, and reversing that becomes impossible, so good decisions from the get-go become of vital importance.

The visuals and UI are all similar to the game’s original ones. It does have a tonne of new icons for new skills and options though and also a soothing blue theme rather than the blood red it had with the disease mode so to have a bit of a contrast between the two modes. There is a new music track that plays during this mode too. 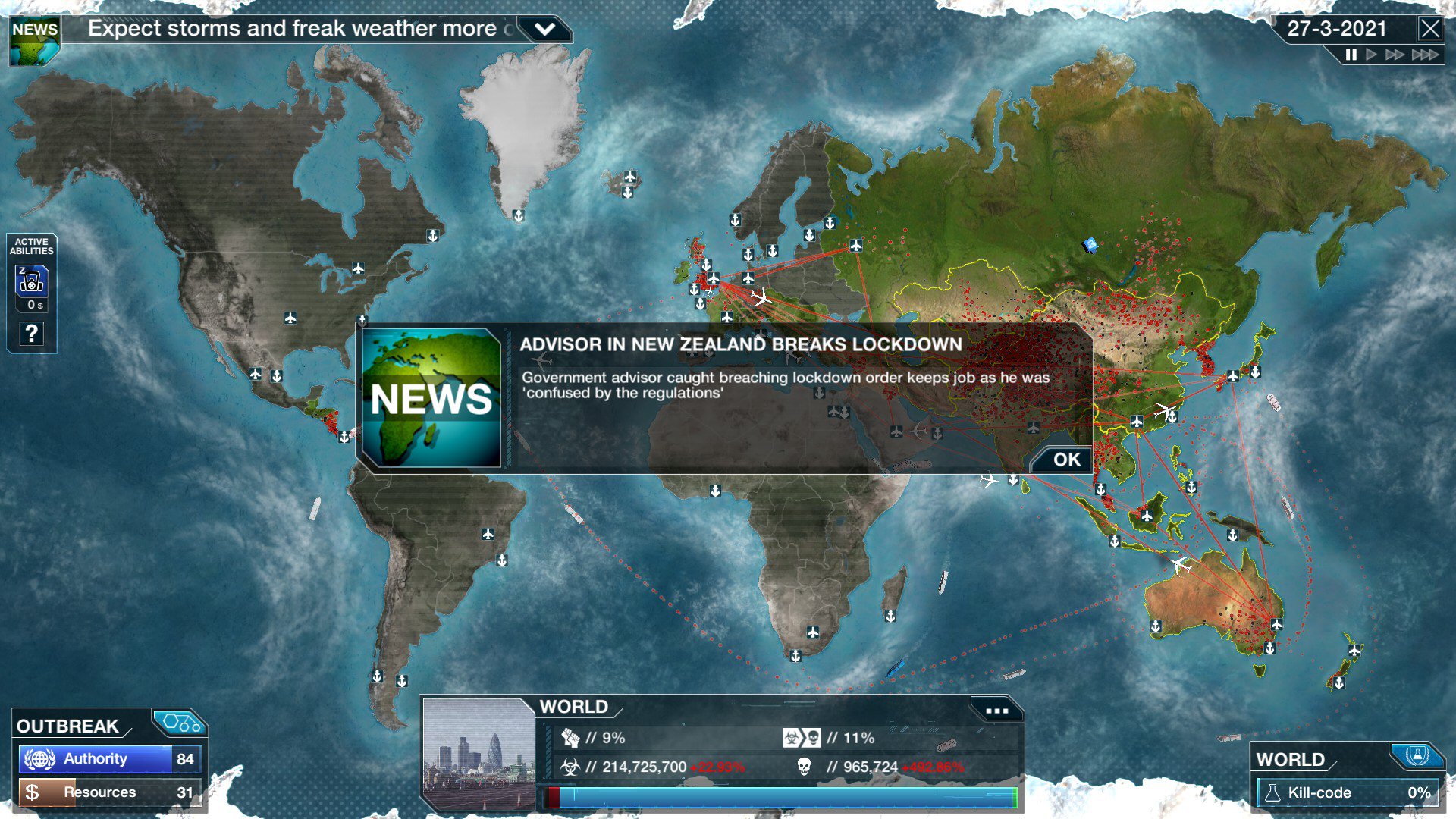 The Cure mode is very strategic, perhaps even more so than the original disease mode. However, it’s not hard to get an understanding of how everything works if you’ve already played the base game. The fact that it tackles so many factors that impact the disease spread and pandemic handling, such as the public compliance and amount of authority you have, makes it very fun and interesting. It does of course simplify some of the science, such as treating a vaccine and a cure as the same thing, but I give it points for realism in many other regards (there is even a slight increase to fatality rate from imposing lockdowns and extreme quarantine measures).

For now, while this DLC is free for anyone who has the base game, there’s no reason not to try this mode. It adds a lot to the game and extends its replay value by a lot. And even when the devs add a price tag to this DLC in the future, I think it will still be worth getting for anyone who has fun with the original game. Some parts of the cure mode do feel a little unbalanced and some information is not communicated quite as well as it could be (such as the impact of some of the upgrades), so there might be a few updates and changes in the future, but generally it’s a solid experience and I had a lot of fun trying to beat each disease type (although I still can’t consider my “win” on Bio-weapon a proper win after 7 billion people of the world were exterminated).