A life philosophy ruminating, fast-paced, geometric twin stick shooter made by the human, Nick Oueijan. Allow me to maybe put it a bit differently, one man’s escape from the black hole life tends to create for a lot of us at some point and a vessel that helped him break free from his own personal one.

Shapes and Sounds of Geometry

Despite only using geometry shapes, the game’s visuals are very well done. Sharp, colourful geometry on a black background with tiny white, swirling stars makes for some good contrast and individual shapes stand out nicely. Game menus and selection are awesomely done, allowing you to pilot your ship and shoot to select individual options which are represented by different drawings. Even looking through your collected mantras is done by turning the pages with your ship.

By default, the game has very high intensity bloom and shapes flashing colours when you shoot them. The bloom is kind of distracting and I turned it off completely. The flashing colours can also be turned off and the game does come with a very clear and visible photosensitive seizure warning. It also comes with colour correction options for colour vision deficiencies. Watch out for any discomfort while playing. To quote Nick, “The world needs you healthy. <3”. 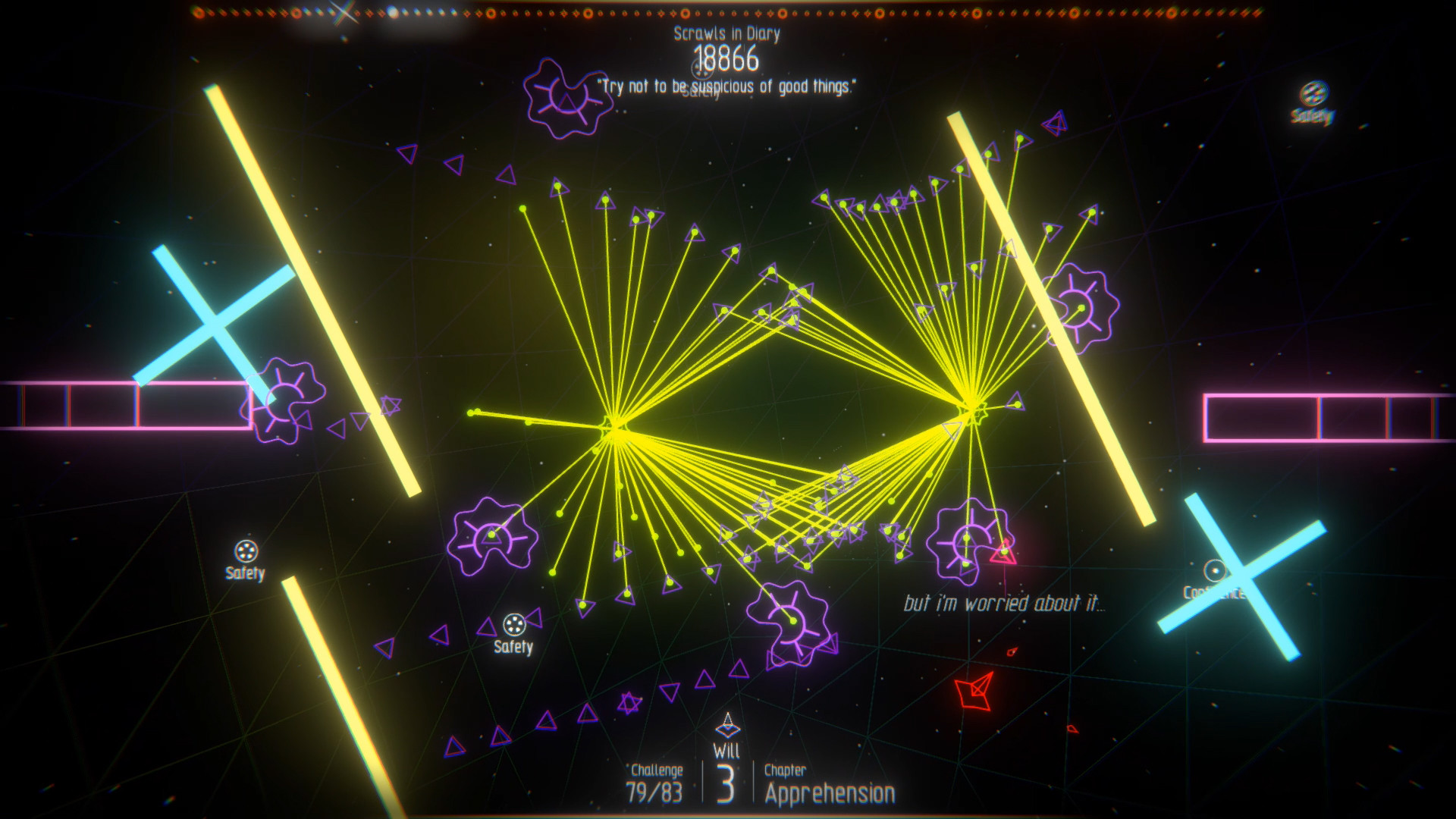 Soundscapes are meditative in nature, calming and relaxing, to set the mood of letting go and preparing to overcome the negative emotions the game throws at you. The controls are very responsive, smooth and your ship moves very fast.

There are 11 chapters, each named after a negative emotion or a mental state. In normal mode you have limited lives. As you go through each chapter, the difficulty of geometry spawns increases as you clear waves and persevere. A challenge counter displays your current wave and they’re cumulative. If you finish a chapter, you can continue to another one and the difficulty just keeps ramping up until you transcend. The visuals will then change, almost inverting themselves and the difficulty will keep increasing until you, eventually, fail. But that’s the whole point, as in life, to pick yourself up, dust off, crack your knuckles and try again. 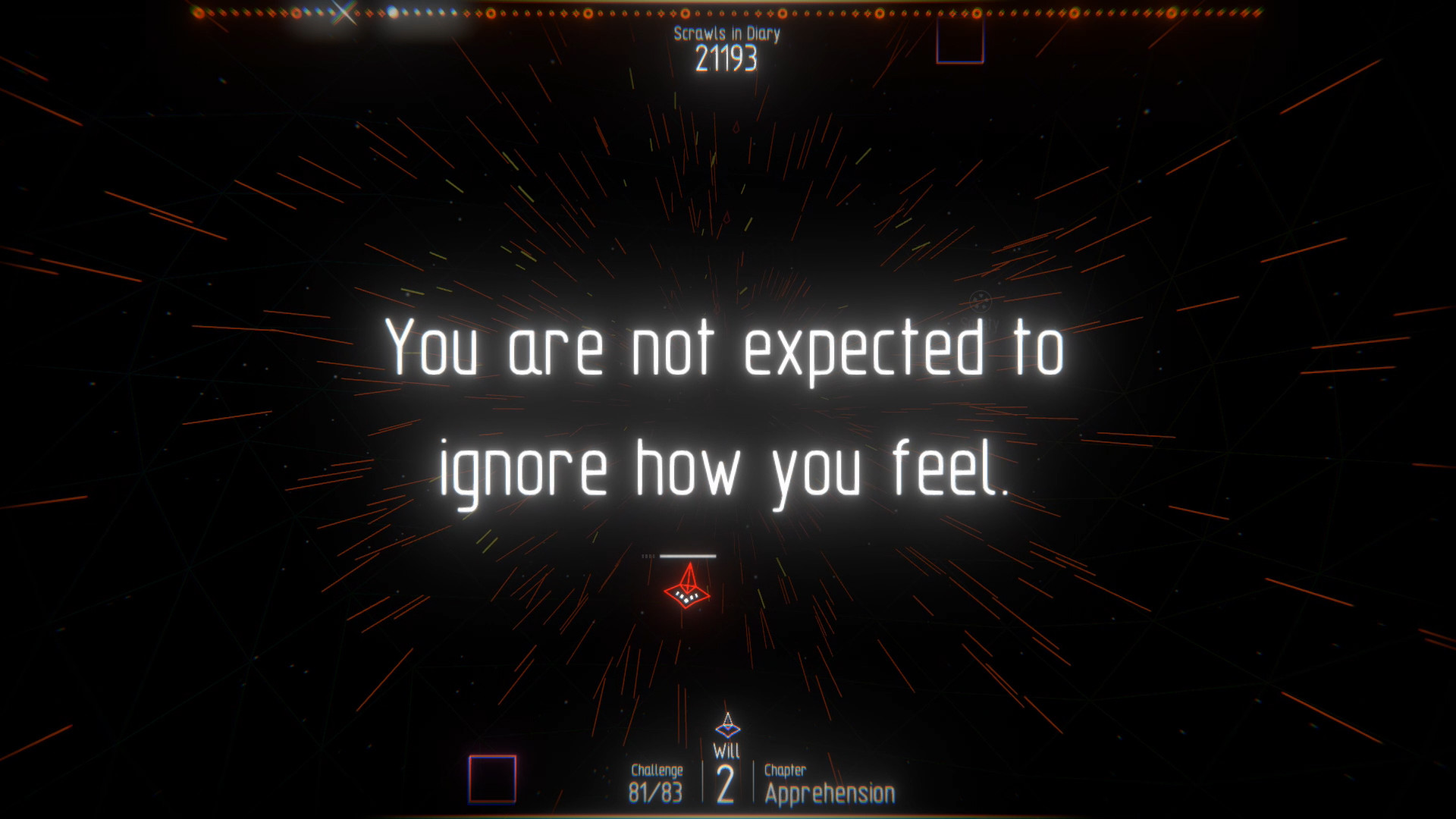 During chapters, you will have small respites where you turn negative thoughts into positive mantras before diving again into the whirlpool of negative shapes and forms, some of which carry additional negativity and are harder to get rid off. You will occasionally find affirmations and positive words, like reassurance, confidence and safety floating in the void which will buff your ship temporarily. There are no permanent upgrades.

Each time you rewrite a mantra, you get a small helper ship that will fly alongside you and shoot, encouraging you with positive thoughts. If you die, you lose them and this is where I disagree slightly with otherwise positive motivational and meditative aspirations. If personal experience has taught me anything, it’s that people that go with you and help you through the void don’t abandon you at the first sight of slipping into bleakness. I know it’s a game mechanic, but I think it really goes against a lot of the things the game is trying to instill and awake in you. 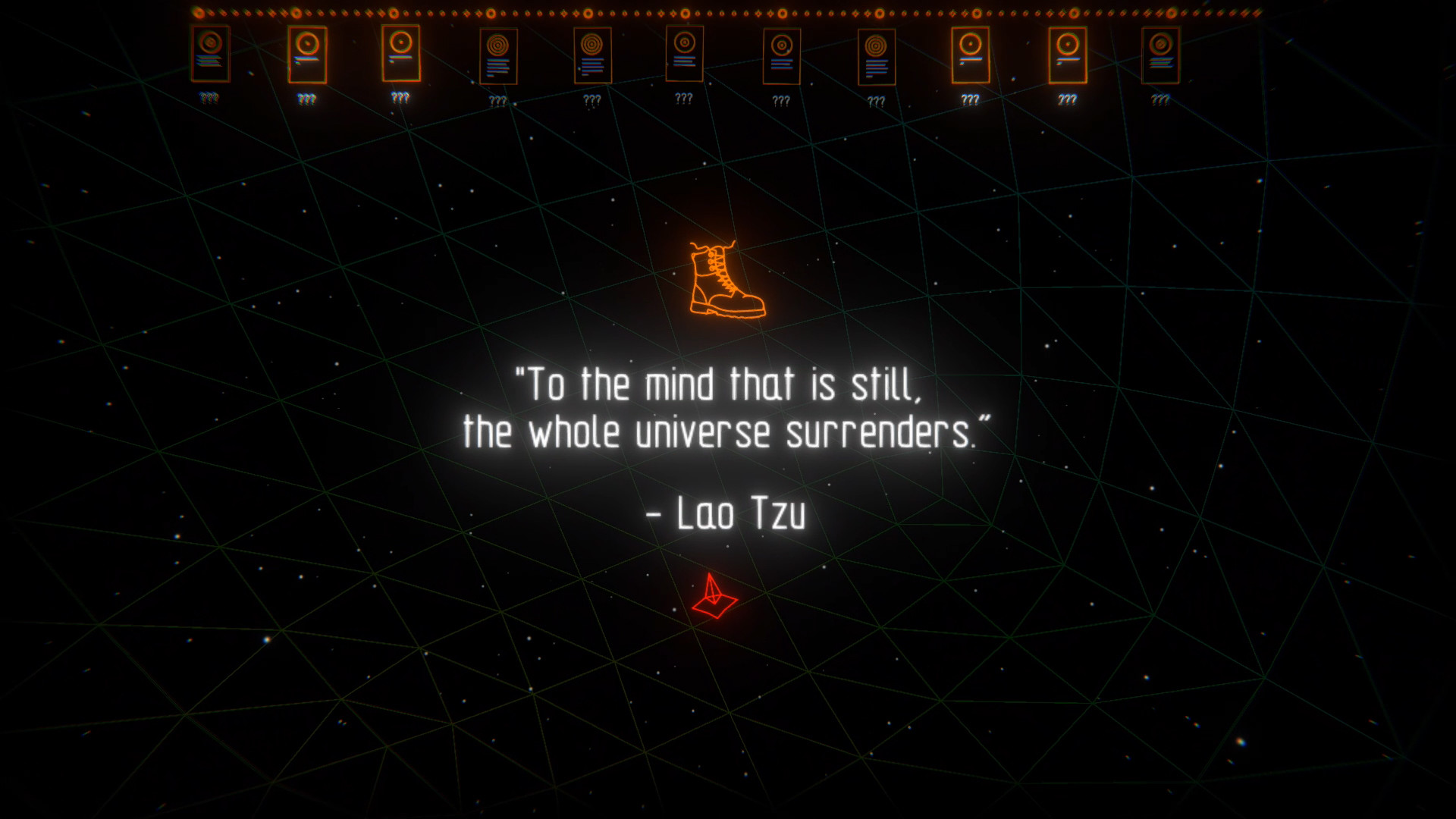 Chapters always end with a boss battle and those are really nicely done. The shapes are wonderful and the battles tense, adrenaline fuelled and liberating when you defeat the boss. The game allows shared/split screen co-op play for some real bursting of negativity with your friends. It also has a relaxing endless mode, with infinite lives if you just want to get into the flow and actively meditate or just forget about everything for a spell. 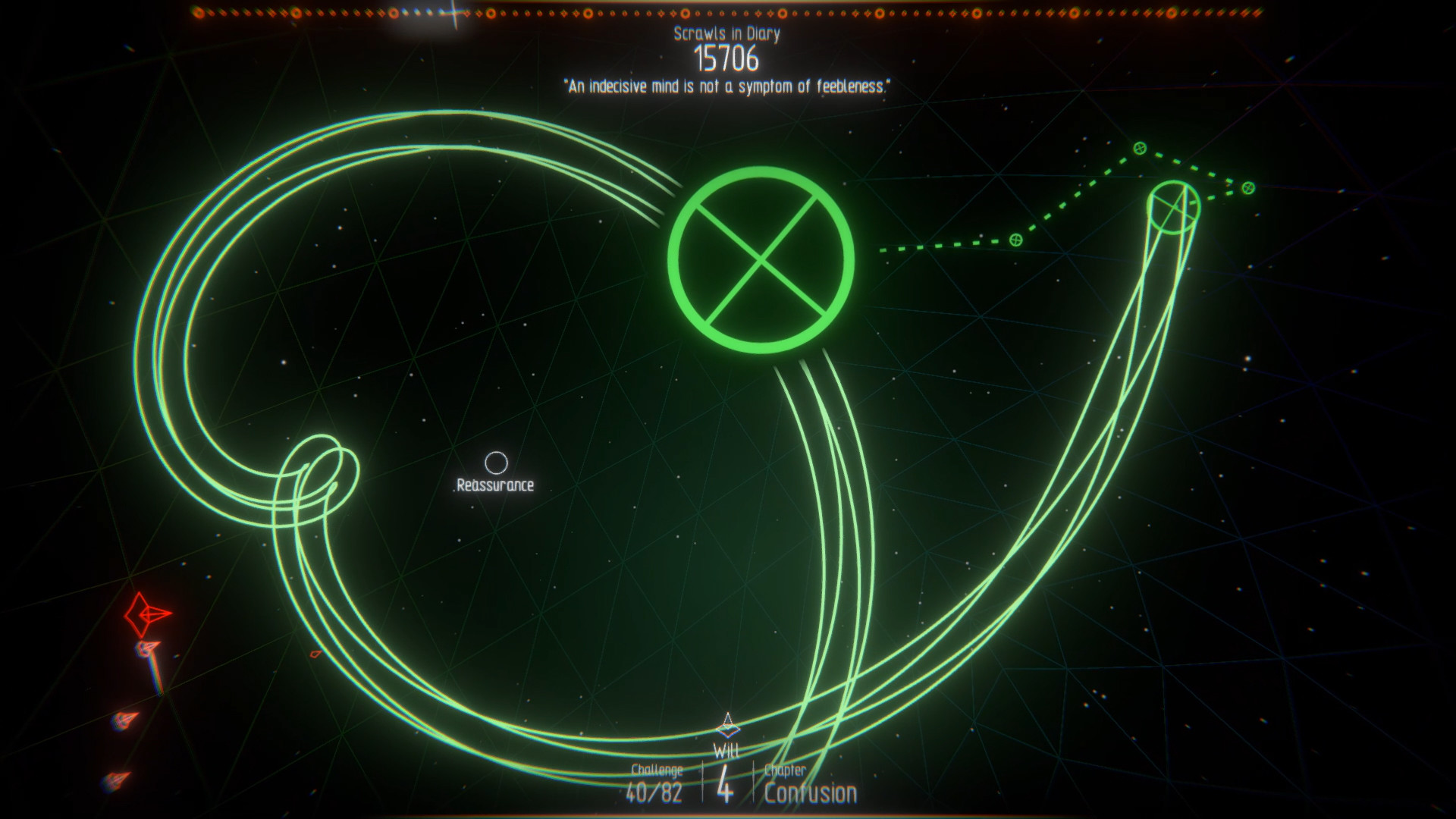 The overall idea of combining a twin stick shooter with an awareness of mental health issues and it’s goal of trying to bring positivity and mindfulness in a playful way is a worthy one, especially for a one man team, two-man, if we count Alaric Quin for the soundtrack, and it’s clear how much of a passion project this is. This is not a substitute for professional help with mental issues and it’s not meant to be, but it’s a good, challenging and fun way to remind ourselves of things we tend to forget, that we should always go on and that sometimes looking into the mirror, smiling and saying “good enough” is all we need.

“It isn’t perfect, but then again, nothing ever is. It can get a little tough at times, but so can life.” – Nick Oueijan