REVIEW: Journey To The Savage Planet

With their first game, Typhoon studios managed to deliver a solid metroidvania style adventure with strong setting, arti direction and gameplay. Even if not perfect, JTSP proves to be a solid title for the genre.

Journey To The Savage Planet (JTSP) is a single-player and co-op first person metroidvania centered around open-world exploration and questing. Set in a relatively close future where space exploration is at its apex, this title will have players impersonate one of the many explorers employed by Kindred Areospace. Sent to an unknown planet, players will have to craft, fight and platform their way to success or die trying.

To boldly go where no one has gone before
JTSP stays true to its namesake, by delivering a world that truly feels untamed, alien and mysterious to the player. The normal canons of “what’s what” are shaken in this title, because things such as plant fruits can be used as weapons, or apparently innocent creatures can blow up in miniature nuclear reactions. Original world-building components such as these and more, united with the additional lore, create a setting that results enjoyable to explore in order to know more about all its elements. The visual rendition, artistic direction are of very good quality, in line with 2021 expectations.

Man, this is addictive!
The progression system proposed by the game focuses on crafting recipes, in turn unlocked by quests, exploration and materials gathering alike. Each area is ripe with secrets, material caches, hidden areas and new discoveries that keep up the player’s interest from start to finish. All the upgrades feel useful, meaningful and are exciting to unlock, as they open up several areas previously impossible to reach – continuing this “discovery cycle” over and over again. This classic metroidvania gameplay style is elevated even more by challenges, quests and gameplay-impacting collectibles.

Built for completionists
Dozens upon dozens of collectibles are scattered throughout ARY-26, some for the sake of completion while others have gameplay-changing effects, such as rare materials for crafting. But there is more: a massive index of flora and fauna is there to be completed by scanning every object, animal, plant and resource on the planet. Of course all of these activities have achievements to match. For any completionist or achievement hunter, this game is a gold mine that will take some solid effort to be fully exhausted. 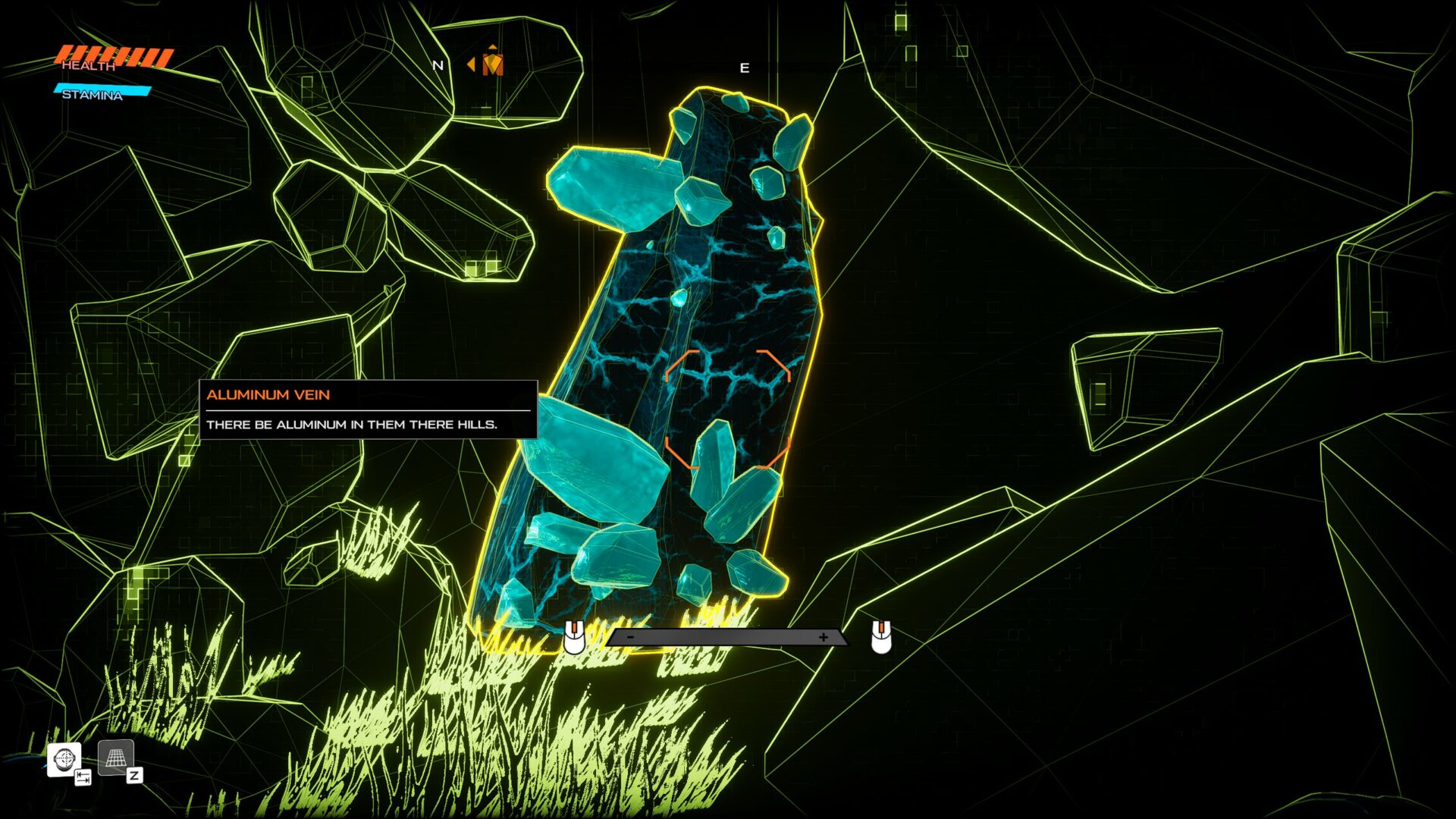 A weak start
In the first hour or two, the game doesn’t start off in a particularly good way. While it does open up to many diverse possibilities, better combat challenge and more secrets later, at first everything from crafting to mobility are very limited, and there isn’t much to do other than following the main quest. It feels frustrating to be locked off pretty much any area that isn’t the main path. There definitely should be more secrets and side activities to do in the early game, to address this pacing problem.

Technical issues
There are a few but quite irritating issues. First of all the game has no pause function: displaying the options menu will NOT stop the flow of time, even in single-player, and yes, players definitely can die from that. This is unacceptable in 2021 and there is no reason for this design decision whatsoever, it’s just stupid. Other than that, considerable frame-rate drops occur in a few select areas, hindering gameplay considerably for a short time. 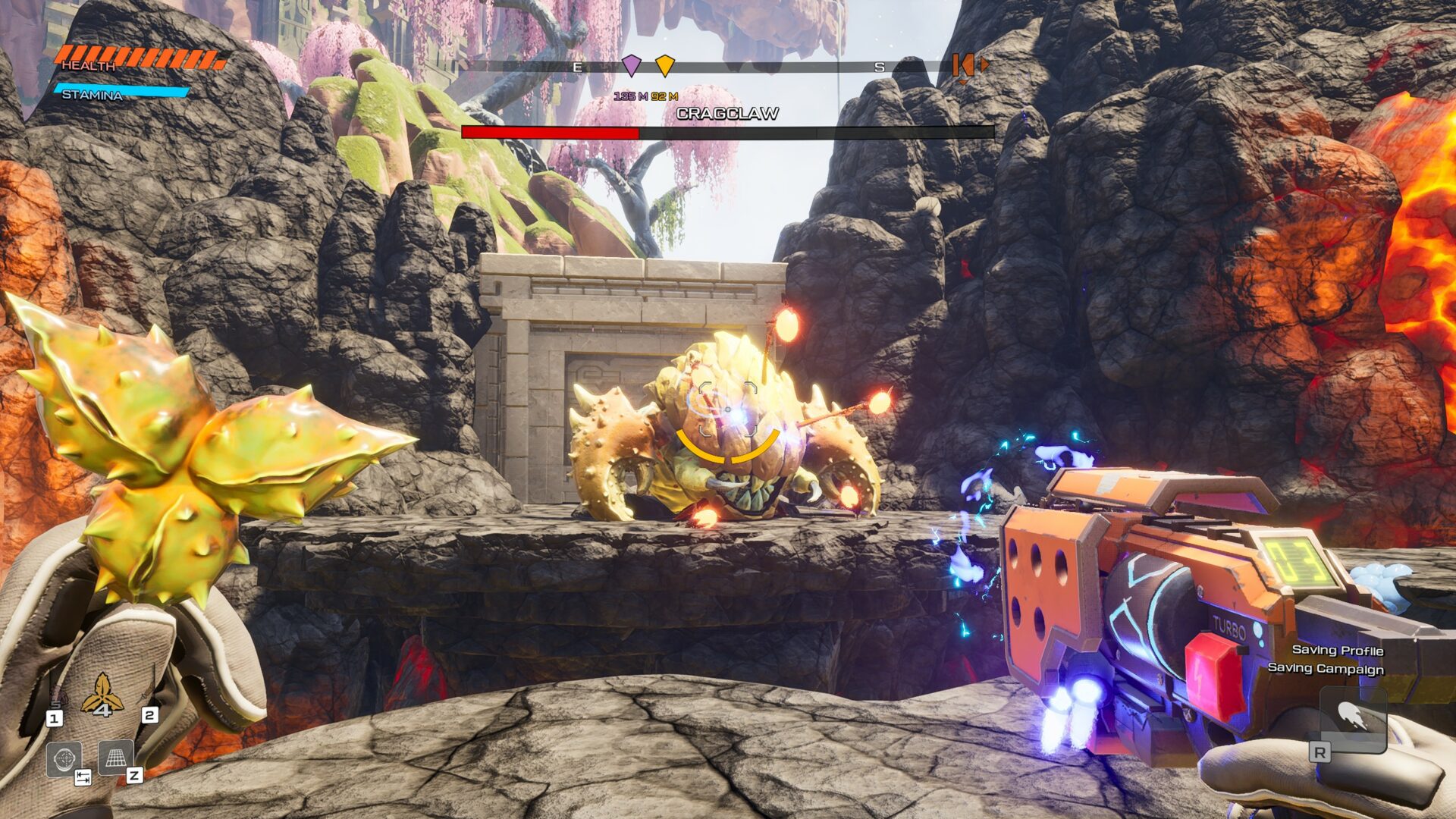 Exploration
Is the main activity, and is performed using a variety of tools such as double-jump modules, plasma grappling hooks and several indigenous plants with unique effects, like spawning jump pads on-demand. The planet is actually an ensemble of fragments floating in space, each with a different biome housing its own “set” of creatures. The same animal may have multiple variations based on the zone it grows in, each with unique abilities or more powerful attacks. The useful scanner tool is invaluable to find secret paths, get info on the local wildlife and even solve some puzzles.

There are a LOT of secret areas hidden everywhere, most of them only accessible later on when the correct upgrade is gained (though some can be “cheesed” with clever jumping tricks). Scanning new plants, animals or minerals may unlock new recipes in your spaceship, so it’s a fundamental thing to do. The fact most collectibles actually are useful for gameplay and not just meaningless tokens makes it worthwhile to look for them. Teleport shrines are scattered in the world, allowing fast travel once unlocked.

Combat
Plays out in FPS fashion, using a plasma pistol as primary means of offense, though also a melee attack is available and useful to dispatch the weakest creatures. Side-dodging is also a function with low cooldown, useful to avoid fast frontal attacks or bullets when the need arises. Ammunition is unlimited, however the gun needs to be reloaded once in a while, and can also use a special “supercharged” attack requiring a precise quick-time event to unleash it. Death means respawning at the ship, and having to gather all resources on the death location (dark souls style). Unless a specific mode is selected, lives are unlimited.

Crafting
Is performed with the 3D Printer present in the spaceship acting as base of operations. Materials gathered while outside are deposited each time one teleports back to the ship, and used when needed. Most recipes are locked at first, either behind story-related progression or side quests and challenges, requiring players to accomplish specific feats each time. While most upgrades are not mission-critical, they surely help a lot against the increasingly difficult navigation, enemies and bosses. 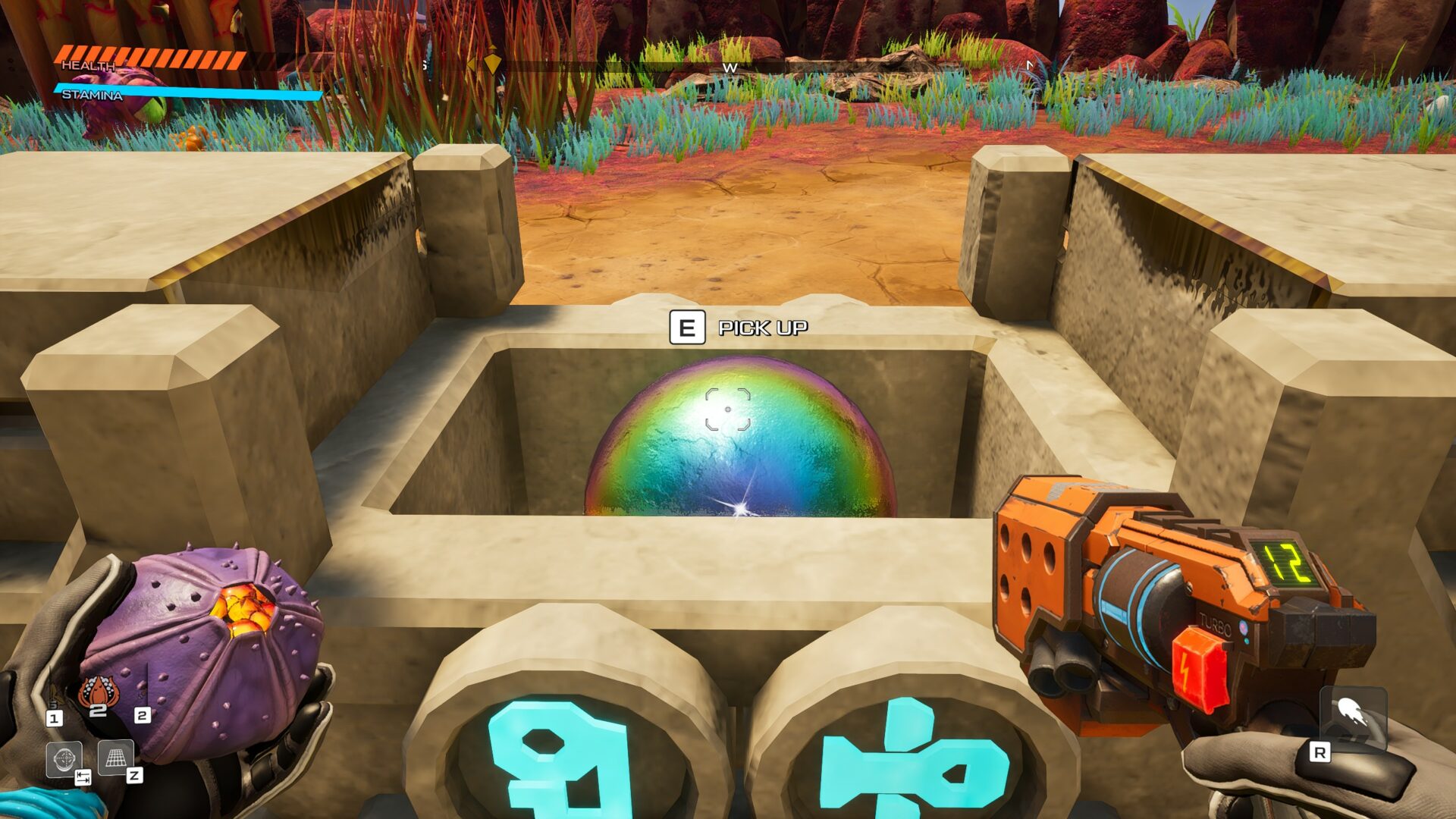 Bugs & Issues
– Considerable frame-rate drops in a few areas regardless of settings or hardware specs.
– No pause even in single-player.

It took me around 10 hours to complete JTSP, by also taking time to complete all secondary quests and most side content as well. For a 100% run including all collectibles add a couple hours to this amount. The game has no real replay value, so i’d suggest to wait for a small sale (15-20%) before buying despite the very good base quality.

Tagged as505 games, journey to the savage planet, review, SAVE FOR LATER, tamaster, typhoon
Share:TwitterFacebookRedditPinterestWhatsAppEmail