A 9-year old girl and her robot sidekick are on a mission to turn the cyberpunk world they live in upside down.

Encodya has us delve into a cyberpunk world, a very similar kind of cyberpunk world as we’re used to seeing – mass use of cyberspace, poverty, government corruption, and corporations ruling the world. This kind of dystopian setting, however, is presented in a more family-friendly manner in Encodya. 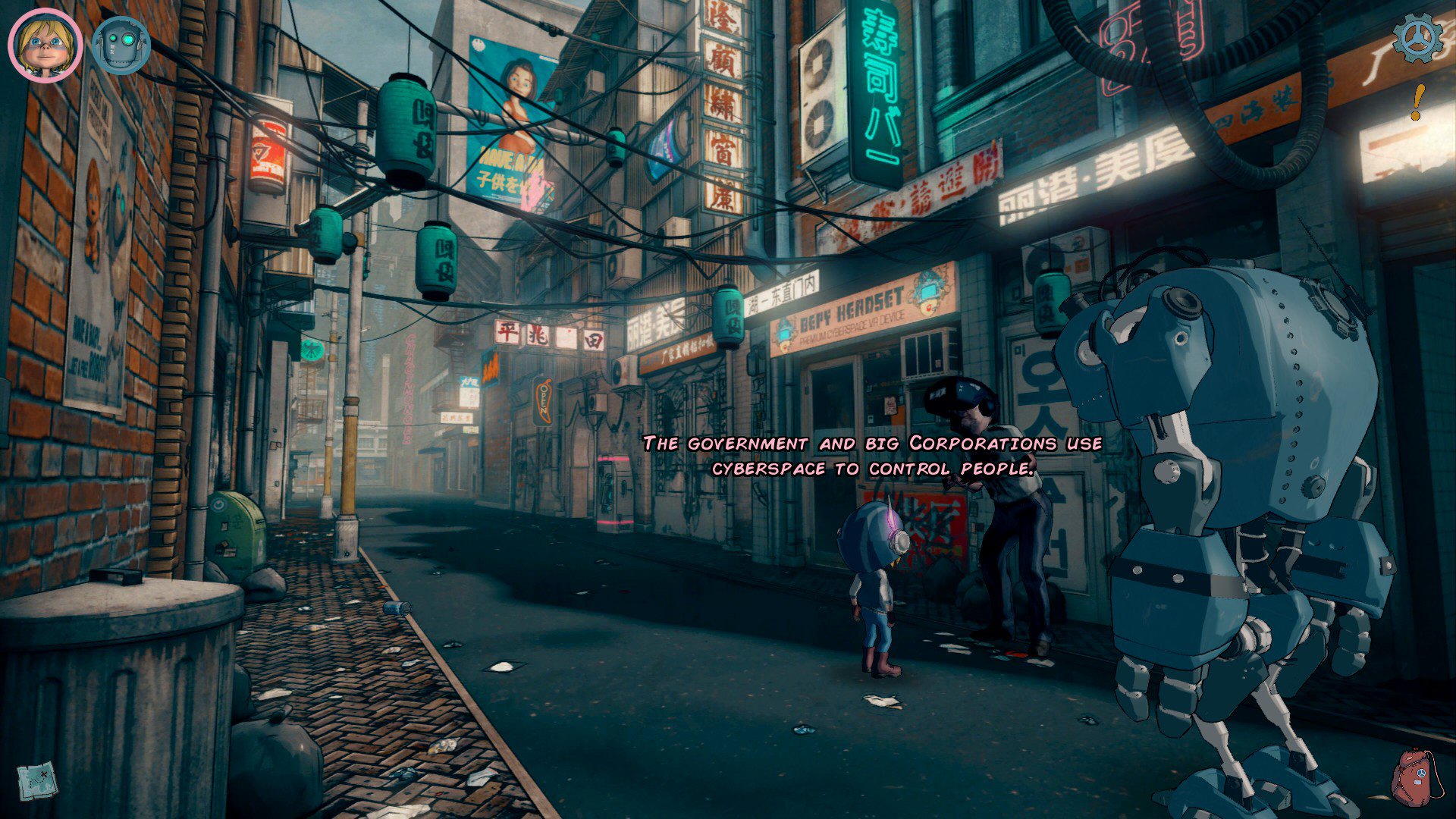 This setting we see through the eyes of two characters – a 9-year old girl called Tina, who is living on the streets, and her nanny robot SAM-53. Tina tries to get by on the streets of Neo Berlin after losing both of her parents, and it is very difficult. However, she soon comes across an encoded message from her dad, who might or might not still be alive and who has a mission for her. Without any second thoughts, Tina and SAM embark on this mission, one that could change life in Neo Berlin forever.

Their mission is not without its dangers, however, and the greedy city mayor by the name of Rumpf appears to be looking for the same thing as they do. They need to be one step ahead of him at all times if they are to succeed. He is pretty much a two-dimensional villain and so might seem a bit too cartoon-like and uninteresting to most players. 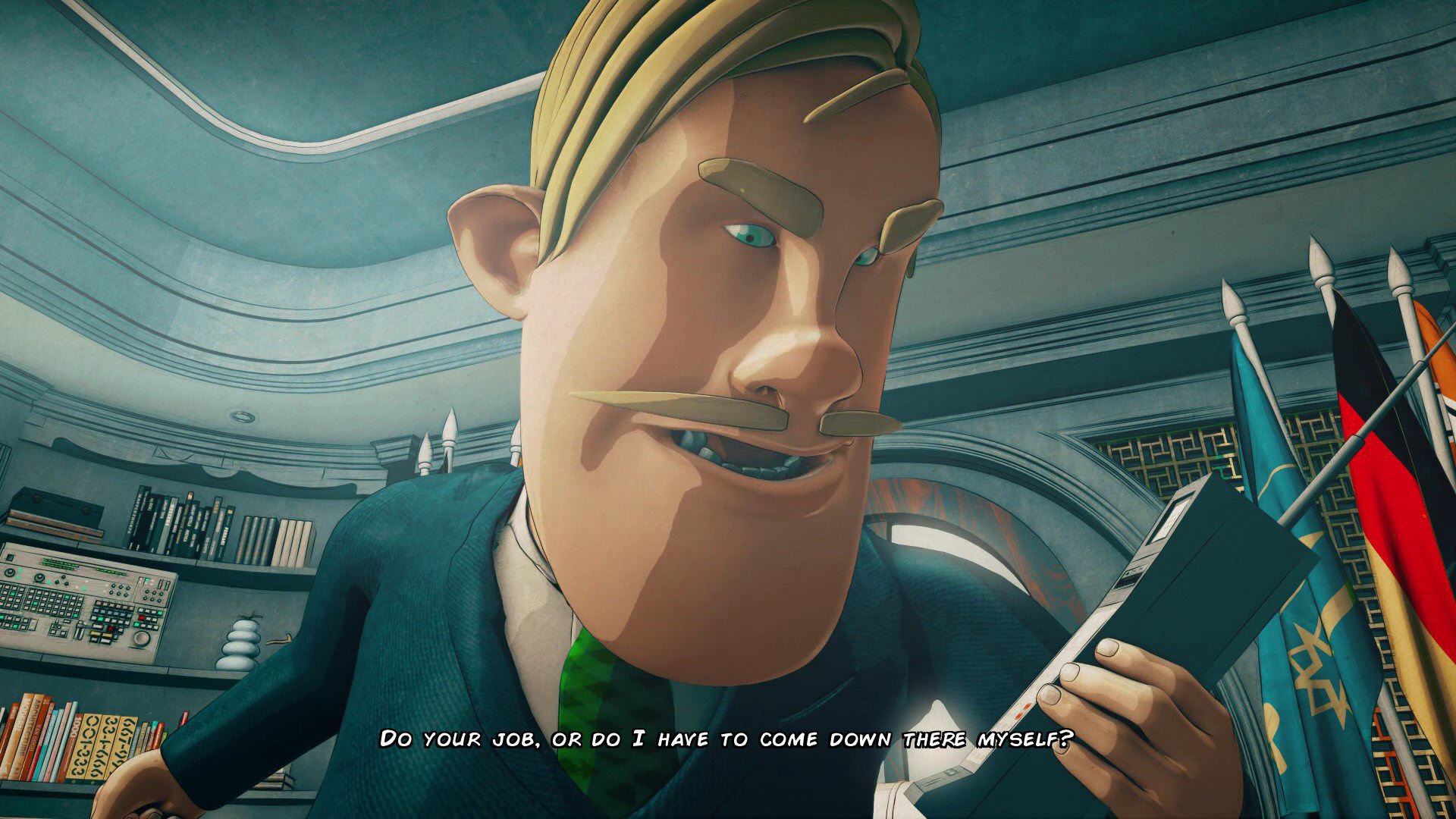 The game presents an interesting cyberpunk world where people are obsessed with cyberspace and spend all their waking hours inside it, simultaneously while other people are living in poverty or have personal problems. It’s more or less the same kind of cyberpunk world we’re used to seeing but with its own reasons for how the world became that way. 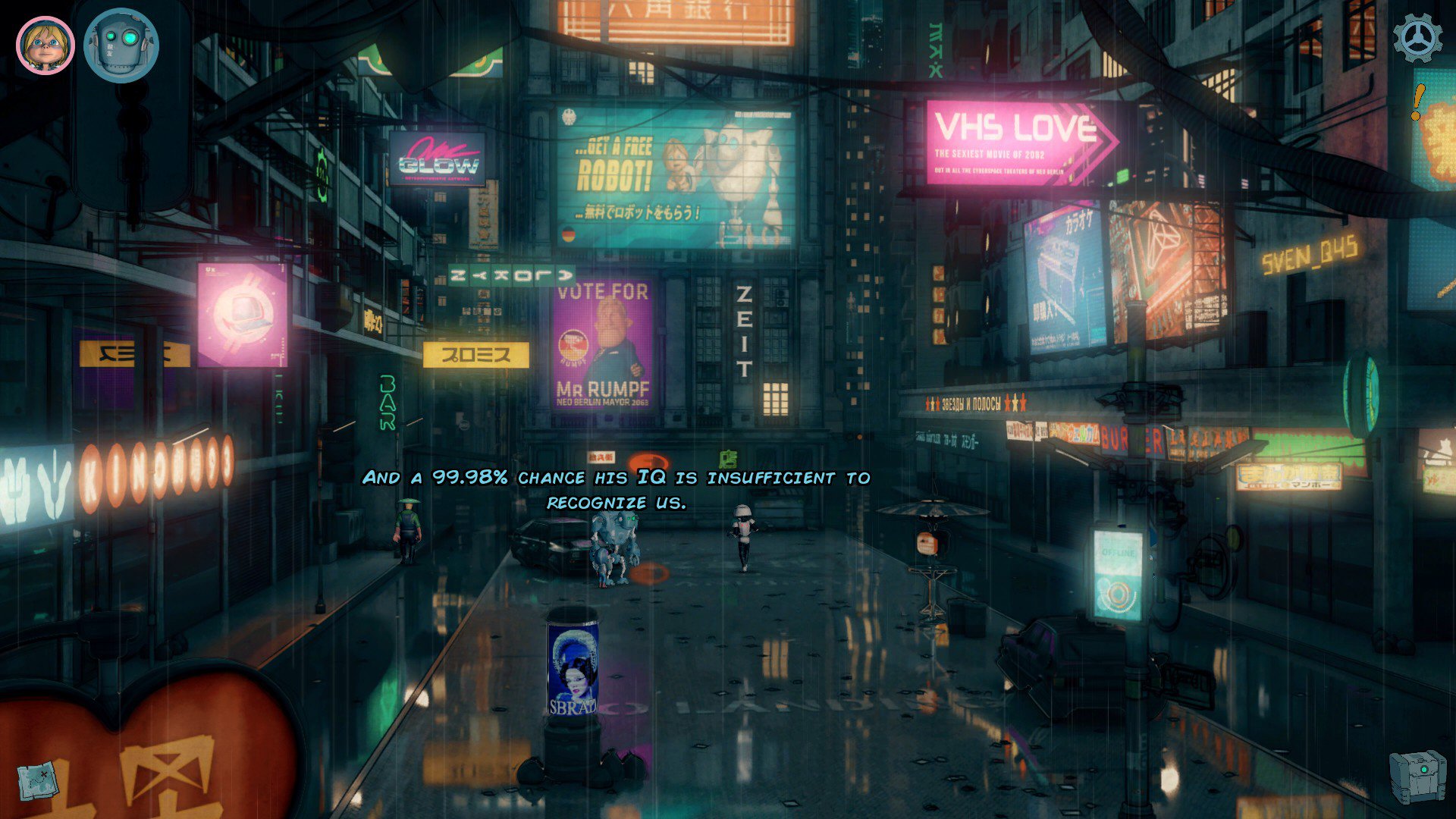 The overall story is rather decent and leading characters have a charm to them, although don’t expect big story twists or tension. It’s more family-friendly with its tone and so would suit the younger audience well. I personally thought the first half of the game was more interesting, when we roam the neon-lit cyberpunk streets and attempt to uncover more about the plot, rather than the second half, which we spend mainly in cyberspace.

There are also a few instances of characters breaking the 4th wall, which I personally am not a fan of as it can break immersion, but at times it’s delivered in a fun and humourous way.

The gameplay is a classic point and click. We have several locations to fast travel to on the map, each one spanning several screens, and in them we can interact with parts of the environment and talk to the NPCs.

There are no story choices to make, so you can safely exhaust all dialogue options with NPCs to make sure you got all the needed information from them. Many of them can reveal things to you that can help you to solve one of the puzzles to further plot. 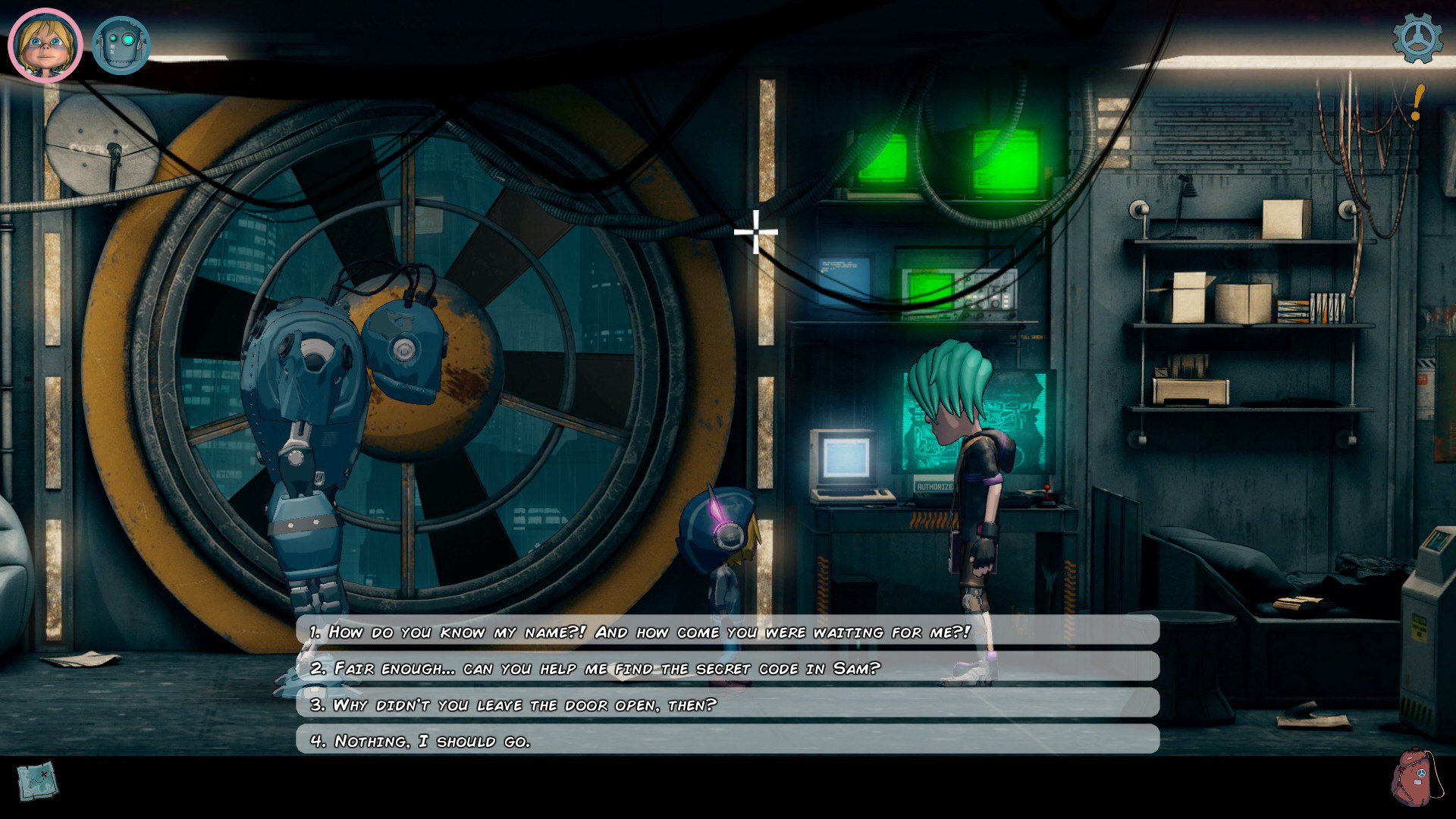 Other things won’t be revealed to you and need to be found by exploring the environment. There are many items to pick up too, some of which are redherring items that serve no purpose at all and are only there to mislead you. Generally, most of the puzzles are quite logical and won’t keep you stuck for long, but there are a few here and there that could seem a bit moon-logic-y and might keep you stuck for some time. There are also 2 or 3 pixel hunts too where the needed item is very small and is laying on the floor or somewhere in the environment where it’s hard to spot, so at times you’d have to pay very close attention and hover your cursor over the whole screen to find what you need. 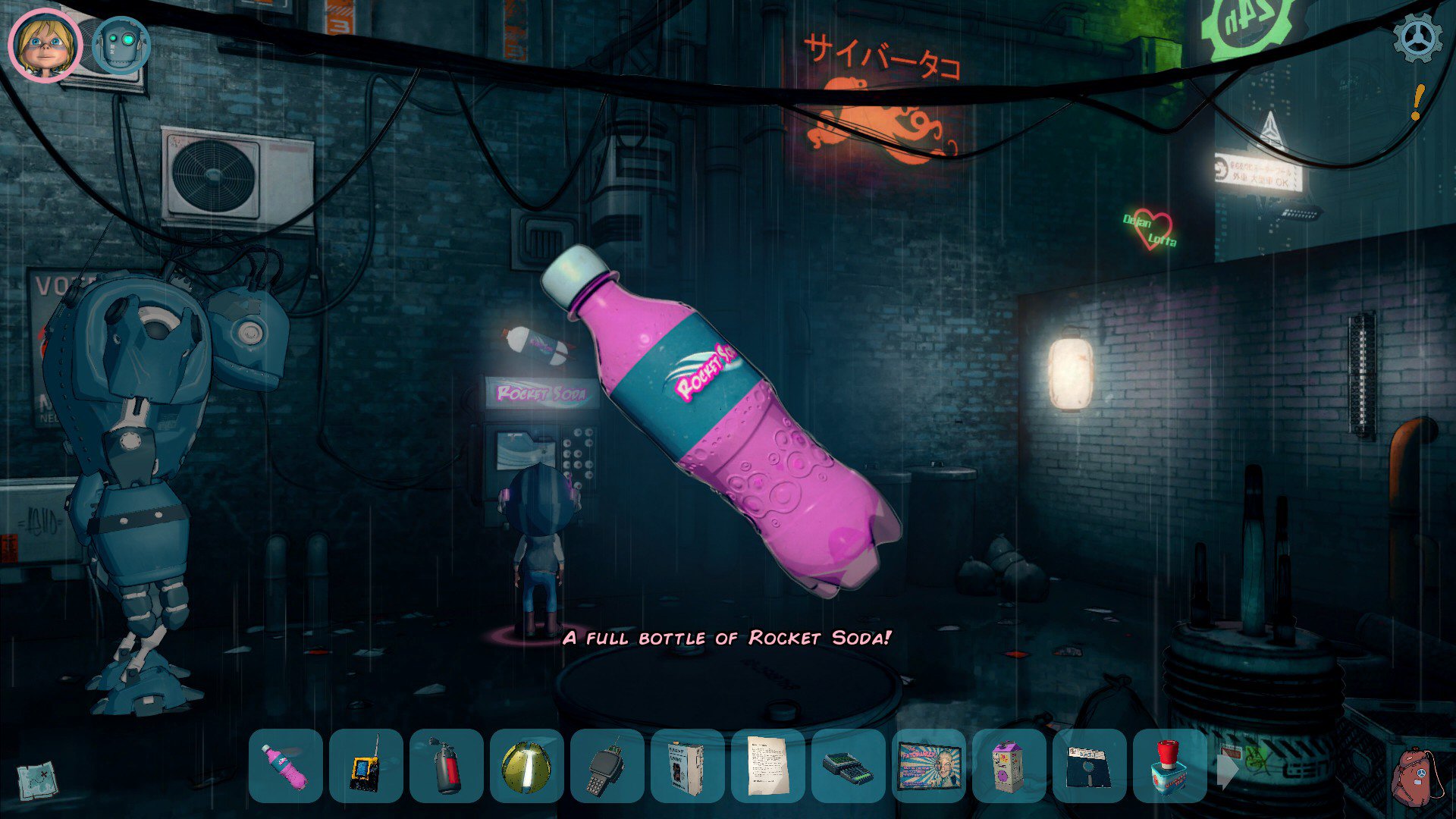 The game has two difficulty modes. The easy mode allows you, when controlling Tina, to ask SAM for hints on how to progress. These hints provide additional help, although they won’t always help with the exact issue that you’ve got at that very moment.

The game has you play as both characters at all times. You’ll always be controlling one of them, while the other follows, and you can switch between them at will. This is a nice layer of gameplay, because some NPCs and some parts of the environment will respond differently to whether you’re interacting as Tina or as SAM. For example, robot NPCs are better to talk to as SAM, because Tina won’t understand what they’re saying, while some of the human NPCs would refuse to speak to a machine and you’d have to talk to them as Tina. Some of the heavier objects Tina won’t be able to pick up, so SAM needs to do that, while some things requiring fine motor skills or small spaces would require you to interact with as Tina. 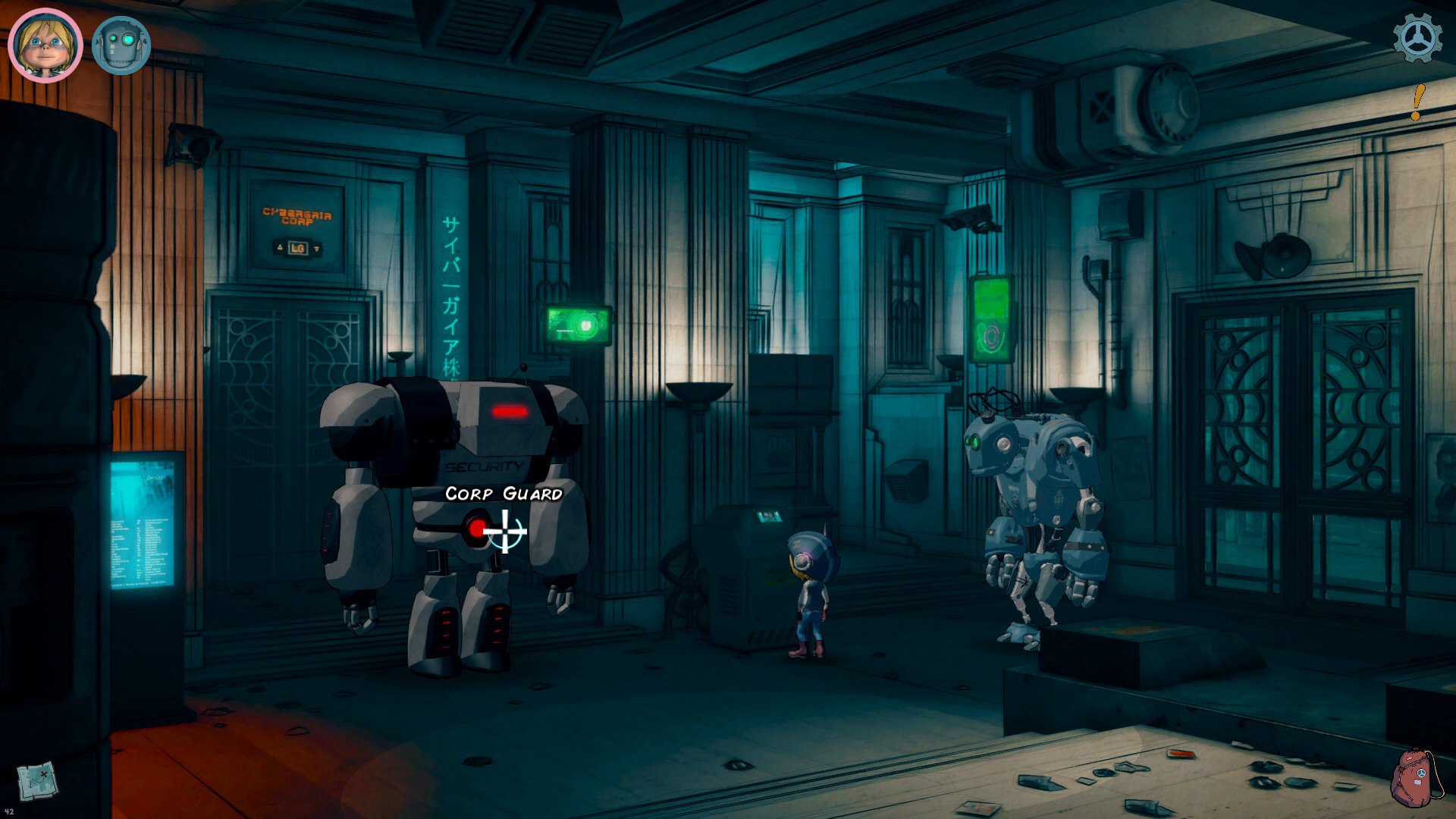 From what I recall, there are no minigames that would require quick reactions or needing to solve some puzzles on a separate screen, but there is a riddle in one part of the game and a few instances of you needing to search an in-game computer for the right info.

From information I found on Steam, turns out some of the puzzles in the game are randomized and could have slightly different solutions when you play through the game again.

The visual style is pretty charming and beautiful. The environments are all designed excellently and are beautiful to look at. The cyberpunk locations of the city were my favourite as I am a sucker for the atmosphere in such settings, but even the locations that involved nature, such as forests and such, were also very pleasing to look at and provided a nice contrast with the rainy urban locations. 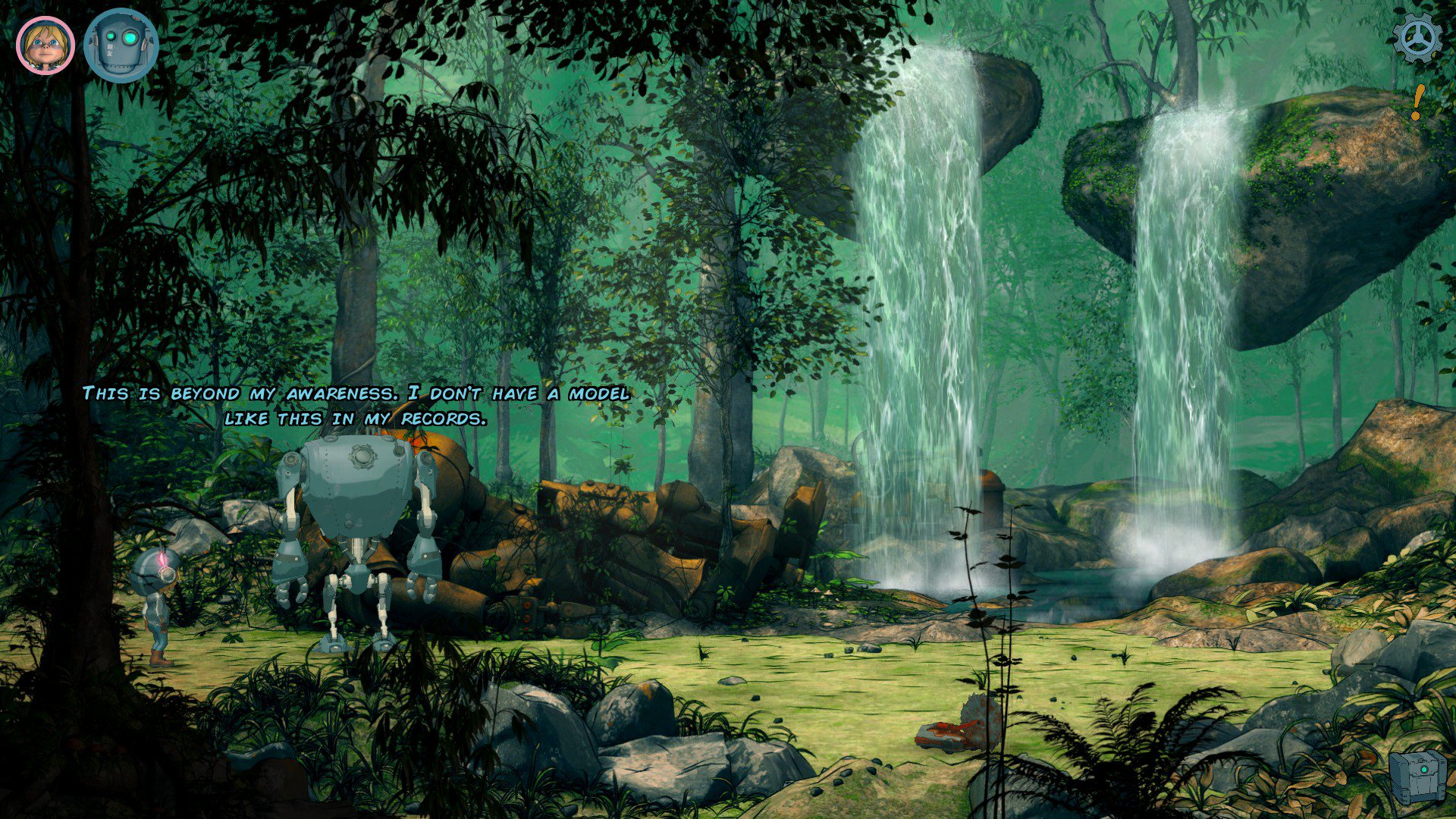 The characters all had a rather cartoony appearance with exaggerated body features and old 3D look. It’s not my favourite type of look, but it was suitable enough for the family-friendly tone of the game and would work better than a more realistic look to attract the younger audience it’s clearly going for.

The music and sounds were generally fine. I didn’t find any tunes to be memorable, but there’s nothing to complain about either. The voice acting is generally pretty good by all characters. As before, it does go more for cartoony character voices rather than realistic ones, which fits with the tone of the game.

UI and menus are generally good too and are easy to use. Although don’t expect for it to be clear which parts of the environments you can interact with. They don’t stick out in any way and you can only know if you can do something with them by hovering cursor over them.

There’s not much bad to say about Encodya. I generally don’t think it has any glaring flaws. But I didn’t find its story or gameplay to be anything extraordinary either. They were both decent enough to warrant one playthrough though, and the beautiful environments should keep you interested enough for the duration of it. A few puzzles might keep you stuck for a while, but majority are well-executed and are satisfying to solve. The game’s full price, I think, is a little high compared to other similar games, so it might be best to wait at least for a small discount. Generally recommended for the younger audience and those who dig the classic point-and-click experience.