A Unique genre for a unique storyline!

Ultimate Summer is an Early Access game from a unique genre called TPSTD, which basically translates into Third-Person shooter Tower defense and it is exactly what someone would think of.

People should not expect this game to be their traditional 3rd Person action shooter!

After checking out some of the other reviews and discussions in the forums I came to the conclusion that some players look at this game as a 3rd Person shooter which in my opinion will only lead them to disappointment. This is basically a Tower Defense game where enemies will only attack buildings. The same happens in Ultimate Summer, enemies will not attack you but will only aim for the building you yourself have built or simply for the machine you’re guarding. Just wanted to clarify any confusion.

Now that the genre and explanation got taken care of let’s start with the gameplay mechanics.

Preparation:
The game gives you a 1-2 minute preparation phase which gives you the chance to collect materials in order to craft traps or defensive buildings. That may sound pretty simple but time is your enemy in these situations, if you’re taking too much time enemies will be way too close to the machine and you will not be able to set up all of your traps and defenses. If you’re too quick you will not be able to build enough defenses because of a lack of material. The best thing is to just collect 1500 raw materials from each material which is wood, stone, and Iron. What buildings should you break? Try the brick fences as they do give you Iron and Stone at the same time, try to avoid boulders if possible. If the wood is what you need try to break some wooden huts or signs instead of trees because these are a lot quicker than mine.
After completing that you should always have defensive buildings and slowdown traps as your first option. That means that you should first place all of the available defensive buildings first and then the traps. The defensive buildings do damage but slow down the enemies as well as enemies will first break these defenses before they attack your machine.
Lastly, you should collect 10 sin points from the pile of dead bodies in order to buy the Assault Rifle which is located in the Gun-Shop. The best way to compare the mining mechanics is that it basically works like Fortnite. Weird but very very effective!

Roaming around Halloween Island:
After placing all of the defenses you will have to rush to the spawn points of the enemies. The enemies enter from 3 entry gates of the Zoo. The best thing is to attack and do as much damage as possible from the beginning. You get to use a lot of different weapons but every weapon is suited for different occasions. One small suggestion I would like to make is when multiple enemies spawn just use the grenade launcher as that weapon takes care of big hoards of weak enemies. Another smart decision is to grind your sin meter in order to spam the Special ability you get which multiplies your damage by a lot. Keep in mind that you collect sin by killing enemies. Sometimes you will have to recollect some materials in order to rebuild some defenses. One quick way is to just teleport back to spawn which is possible by interacting with the purple campfires (at least these things look like that). As far as shooting mechanics go the game is pretty simple, you can zoom in slightly and aim a little better but there is no recoil or even reloads within the game. Not the best decision in my opinion as reloads would make the game a little bit more skill-based.

Before I start the quick peek of the story I would like to mention that both games are connected storywise. Infernal Radiation is mentioned multiple times in Ultimate Summer. The Monkey scientist you’re protecting was part of the factory that exploded on Halloween Island. The protagonist of Ultimate Summer was the same Poet who was on fire at the beginning of Infernal Radiation. Now Ultimate Summer is the game where your Poet was on vacation. Sadly another hell outbreak happened and he protected some random monkey and penguin building a huge washing machine. Later on, it turns out that the monkey was a scientist who died in the explosion on Halloween Island. As you fight hordes of enemies you learn more and more how sin works. The protagonist seems to be very critical of the characters around him which will lead to some surprises.
Overall the game has an interesting story although it can be a little weird for some people that did not play Infernal Radiation.
Keep in mind that the game is presented in a comic book art style which is one of my favorite aspects of the game.

The game was developed by Unity which is a well-known engine for Indie games. 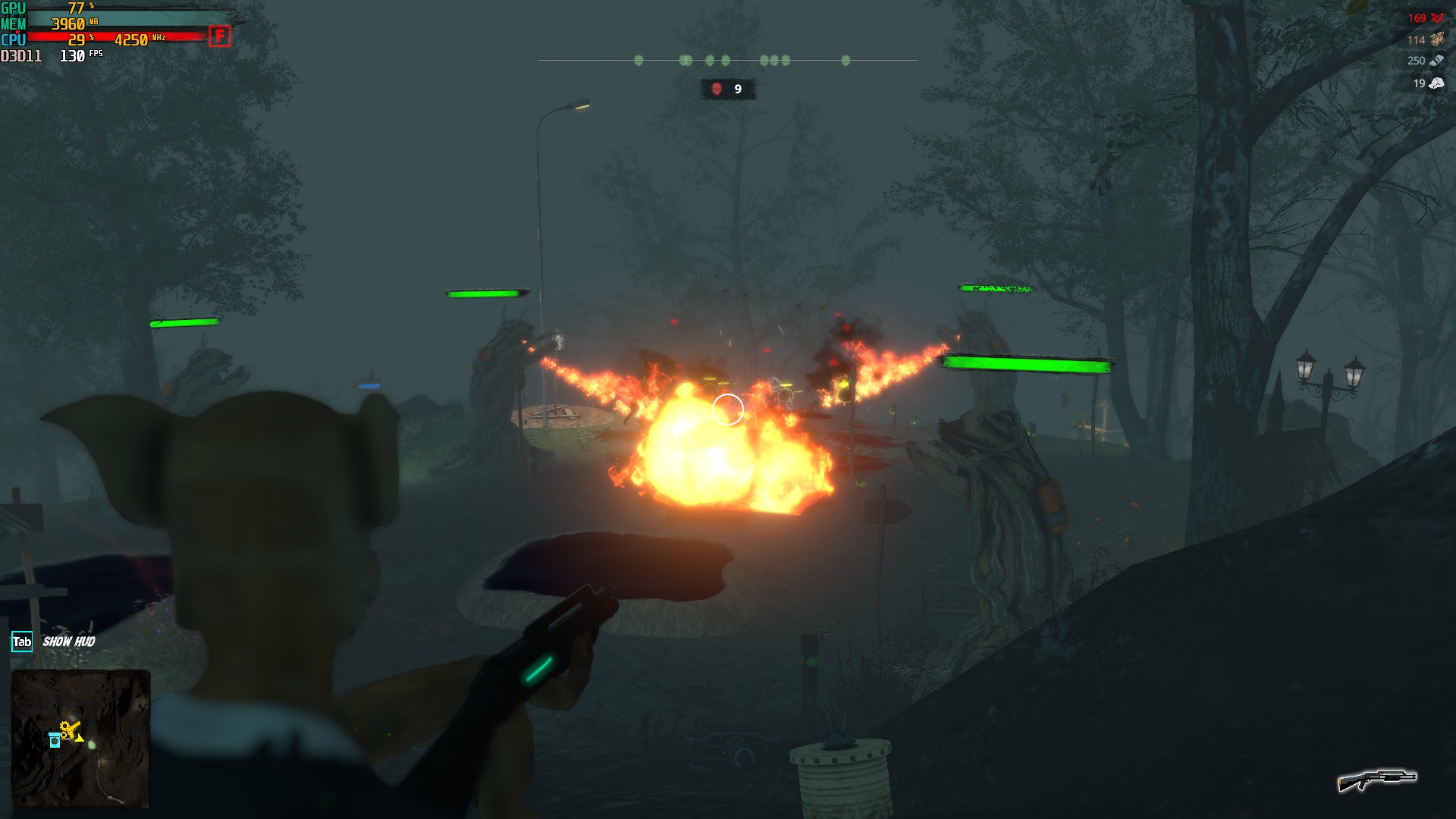 Audio / Soundtrack:
Just like Infernal Radiation this game has a pretty well-matching soundtrack to the whole setting of the game. There is no Voice acting sadly. Gun and Monster sounds are pretty basic but they honestly do their job.

As usual, a game with the Unity engine will perform very well.

Bugs / Glitches / Crashes:
In almost 4 hours of slaying hellkinds monsters, I experienced no crashes outside of some minor bugs.

Ultimate Summer is a pretty solid Early Access game if someone comes in with logical expectations. The game might be a little slow to entertain you but after level 3 it will actually be a demanding experience and with huge bloodshed. The fact that this is an Early Access game might be a good sign as devs will probably add more to the game so I would keep an eye on this game for sure.