An Early Access 2D soulslike/metroidvania with a mouthful of a name commonly seen in JRPG’s, but don’t let that put you off.

The game’s enchanting and impressive grim and sombre visuals, melancholy soundtrack and very fluid, responsive and smooth controls more than make up for the unfortunate title mashed together from random, rarely used dictionary words.

Visuals, character animations and the overall game effects really grab from the moment you set your eyes on them. Made in a fabulous, slightly anime style, using parallax scrolling, backgrounds and blurred, out of focus foregrounds makes the world of Land’s End really satisfying to run through. There’s a lot of neat little animations, from the way the water splashes to the way your character sits when she rests or the way she turns to look at something or pick up things, that really make this game stand out visually. I’m especially fond of attack animations, the way spirits appear out of thin air and execute attacks and the way they appear around you when you stand idle. And it’s not all doom and gloom, there are distinctive splashes of colour that merge well with the overall ambience and give a sense of hope that not all is lost. A lot of effort has gone into creating this world and it shows. 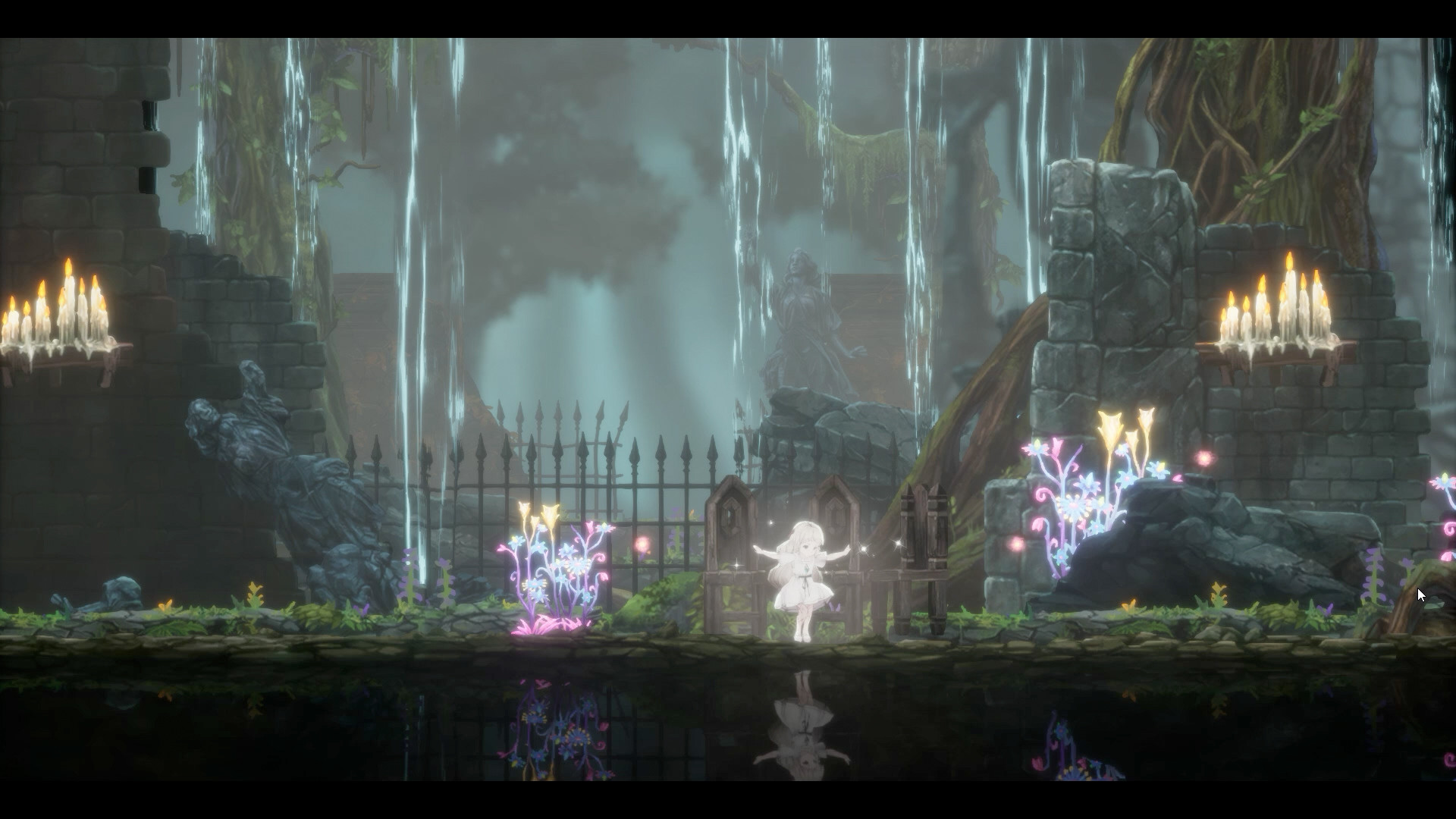 Soundtrack accompanies the dark visuals well, with bleak piano notes and the quiet voice of the singer creating a slightly depressive and dismal feeling. It fits the game’s aesthetic nicely, but is very sparse, a bit lacking in variety and most of the game is played without it. It’s done by Mili, a classical Japanese indie group that has done work for other games and anime franchises. The game can certainly use more of their music.

The story is typically vague for these kinds of games and ticks off most Dark Souls checkboxes. You play as a little girl without memories named Lily, awoken by a spirit knight into a world devastated by endless rain that causes something called The Blight, corrupting everyone and turning them into monsters. No spoilers here, you’ll be piecing the story and restoring Lily’s memory by finding notes left by others and defeating bosses. Each boss grants a cutscene and there are currently 3 of them available.

The notes you collect can be found in your diary, called Findings and are essentially, a collectible. You can also find items that will increase your max hp and healing prayer potency and the game features relics which are more potent items that you can equip and have a limited number of slots for, but those can also be upgraded. Game’s currency, or Residue, for upgrading your spirits comes in three varieties. It doesn’t drop from enemies, but is found on unique dead bodies that are sometimes accompanied by a few story sentences. I did notice it does drop from breaking crates and barrels.

The combat is very smooth and responsive, with some very neat mechanics. Lily herself doesn’t attack. The knight that awoke you is your first spirit bound to you with basic attacks that are unlimited. Every boss and mini boss that you meet and purify grants you another bound spirit with a different attack, some of which have limited uses replenished when you rest, and the main bosses grant a world traversing ability that you’ll need to access areas that were off limits before. The attacks are fluid and easily comboed and the way the spirits materialize and attack really makes for some stylish combat. 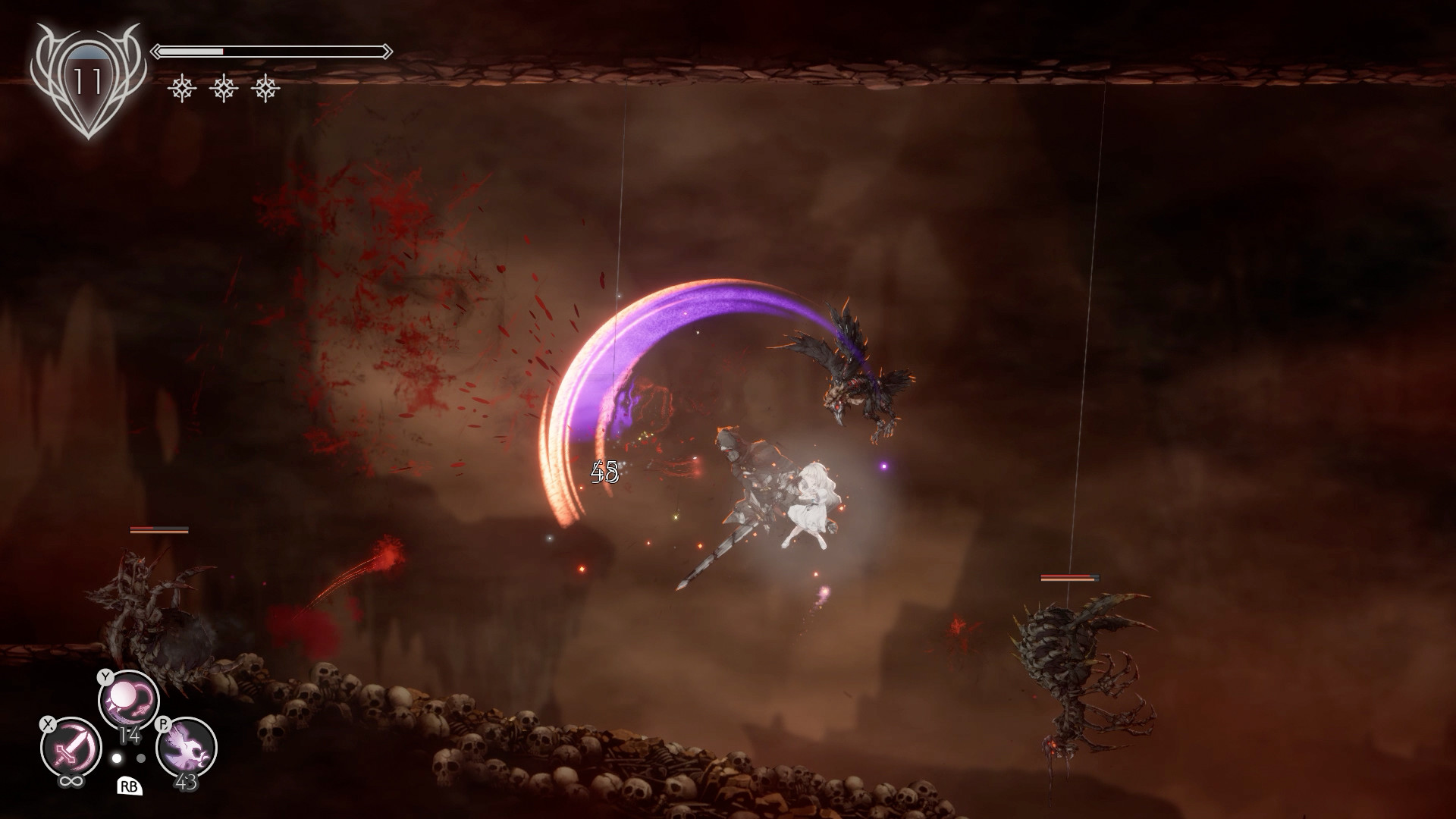 There’s no stamina bar and Lily can dodge as much as you want, even in air. There is a tiny delay between dodges and I’m going to assume it’s Lily recovering from diving through the air and faceplanting head first into the ground, dazing herself. That’s the only slightly awkward animation, but it’s charming and I digress. Contact with enemies damages you and bounces you a bit, but that is a staple of metroidvanias.

Overall difficulty is on the easy side, with enemies being slower than in similar games and experienced players should have no problems tackling the game’s bosses and enemies which all have clearly patterned attacks. You still can, and probably will be, caught off guard by them until you learn the patterns and if you let your concentration drop. Considering there’s not even any kind of penalty for dying, just respawning at the last bench, or Respite as it’s called in-game, which are plentiful, this looks like a perfect start for people wanting to check the genre.

I’ve encountered no technical glitches, the game works smoothly and seems to be very well optimized. It does seem to be much more suited to playing with a controller instead of mouse and keyboard, although you can rebind keys in the settings. Some of the areas and items in the current version don’t seem to be accessible even though you can see them.

It’s a very promising and satisfying Early Access game done right. There’s around 30% of the game available in it’s current state, 3 out of 8 stages, with the rest coming along and the game leaving Early Access with the 1.0 version sometime in Q2 2021. It took me around 5 hours to complete the content it has now and my only small complaint is that the asking price for EA does seem a tad high and it’s worth noting that the developers say the price of the full release will increase. But, in a slightly oversaturated genre, this stands out on the merits of sublime visuals, overall ambience, fun combat and some neat mechanics.