Plague M.D. is an medieval doctor simulator. A brief dive in the 16th century european village in need of anybody willing to take the responsibility of becoming the doctor.

✓ It is extremely atmospheric and immersive.
✓ The graphics are done very well and with great care.
✓ The repetitivity of the actions can be therapeutic, but do not worry, it’s never boring.
✓ A large variety of illnesses and tools.

The player is put in the position of a weary traveler. After having reached a village he discovers the possibility to settle down, taking the vacant spot as the healer. Although he knows nothing on the matter, his silver tongue grants him the position.

However, every slip and mistake is accounted for and charlatans are only good as stake fuel. And so as a mysterious sickness spreads around the country, this amateur doctor has to worry both about his own life and safety of the village. 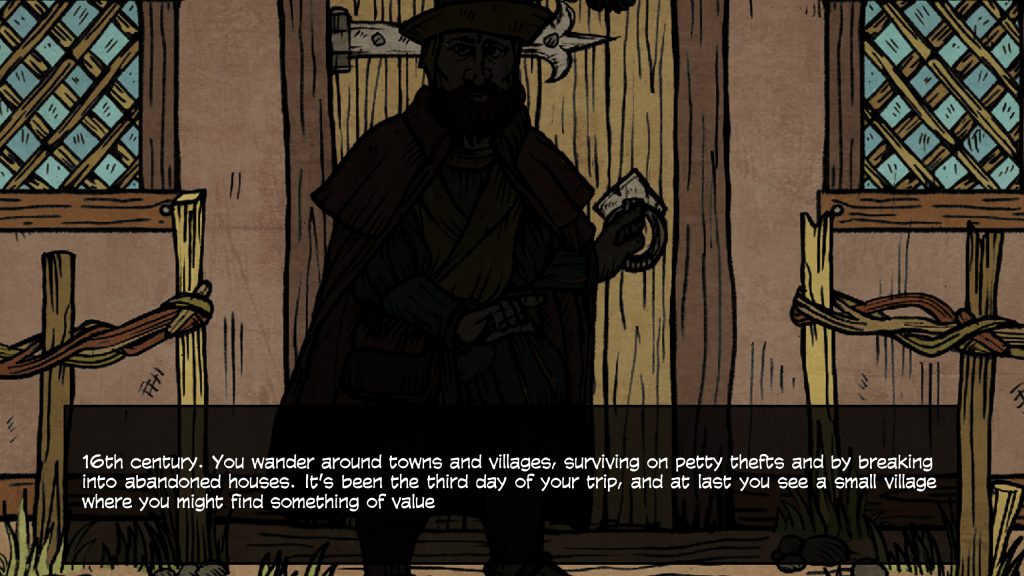 There are 11 chapters in total and each consists of a day of work that in the narration is representative of a longer period of time.
The chapters are divided in three parts: the time in the village in which it is possible to visit the tavern and run errands at the shop, a major event with choice and finally work. Oftentimes work will be prefaced by yet another interaction, such as lamenting of the priest or an emergency the healer is not quite ready for.

The core part of the game follows a formula similar to those used in cooking games. One person in need of treatment at a time visits the facility where they explain or visually demonstrate their symptoms.
The cure has then to be prepared according to the recipe book that can be consulted, which will also pause the game. Tools and medications to use are also displayed above the patient, however some steps might be tricky or look confusing, especially in the beginning. 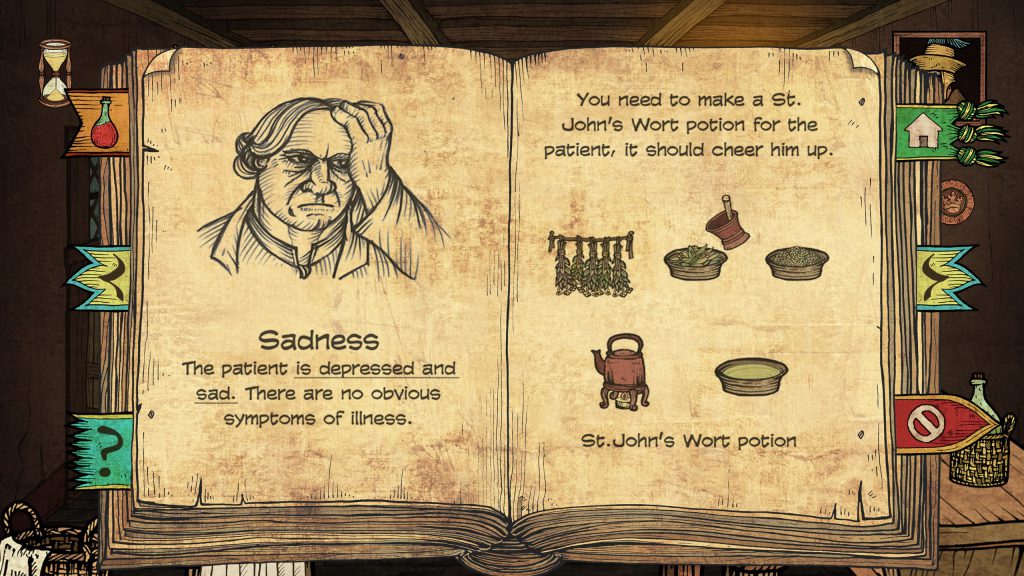 There are some elements that disrupt the routine and make the work harder. Those include rats jumping on the table and stealing ingredients that are being processed, the priest singing the healer to sleep, the drunkard who convinces sick people to not accept treatments and throwing them away and others. The mallet can help getting rid of some of those nuisances.

The difficulty in the game decreases with progression. In the beginning it might feel unfair, but it doesn’t take much for the balance to shift. This happens because of the accumulation of recipe and symptom knowledge together with tool upgrades make the therapy much faster.
Each chapter introduces new, more complex remedies which makes the game more dynamic and never too easy.
As the plague spreads to the village, the doctor crafts the characteristic plague doctor mask. It is however very hot and difficult to breathe with it and so it has a cooldown time. Nothing happened even if not wearing it for the time required to cure a few people, but it is possible to contract the plague. Patients with plague will also require not one, but two different cures.

Choices that are made during the events and dialogues have a critical role in the game because they influence the reputation with peasants. If the patience bar fills up normally the player would be sent back in time, or if the “one life” mode is active it would result in a game over. Pardons can help and lower the bar and a Royal Pardon can help evade the death toll once, but those items are costly and buying them subtracts money that could be used to buy faster tools. 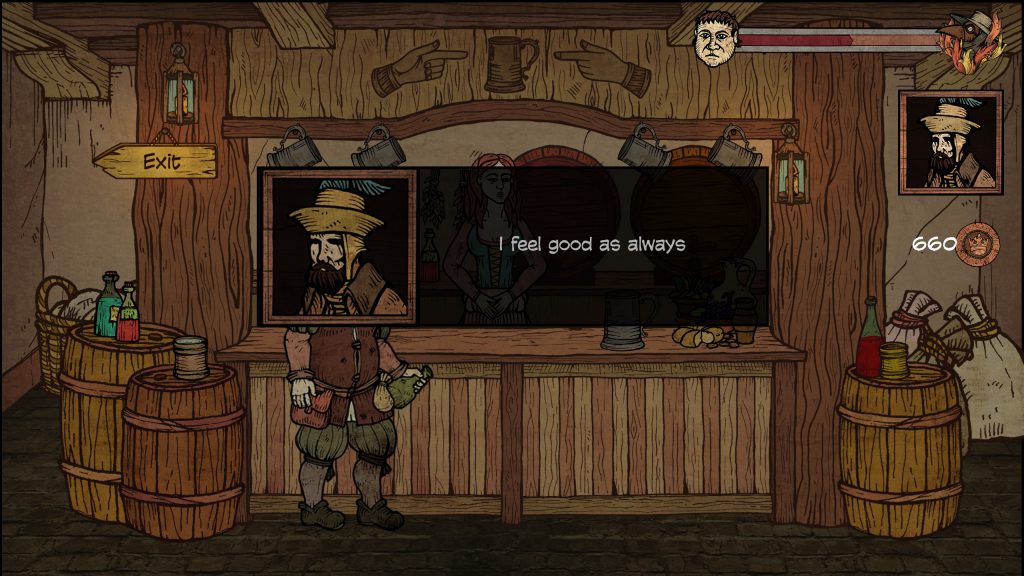 As this work is extremely stressful there is one more thing to take in account. Even if the healer says he’s “good as always” his exhaustion can be seen as his portrait becomes darker and darker. Stress level can be reduced at the tavern at the cost of some coins and reputation, but putting it off for too long can result in his undoing.

There is also an endless mode, which is a challenge to cure as many patients as possible before collapsing.

The game is drawn in a gorgeous 2d style. It resembles medieval miniatures, with heavy and detailed ink lines, with a lack of prospective depth, very appropriate for a Late Medieval Europe.

However the plague doctor has first made an appearance in the century after the century in which the game is set.

A very nice touch is how the various remedies have been carefully studied. For example the St. John’s Wort is a herb that has been historically used to cure depression and is still being analyzed in contemporary medicine. Wounds have been treated with egg yolk and turpentine to remove maggots. Leeches were every doctor’s favorite as well. 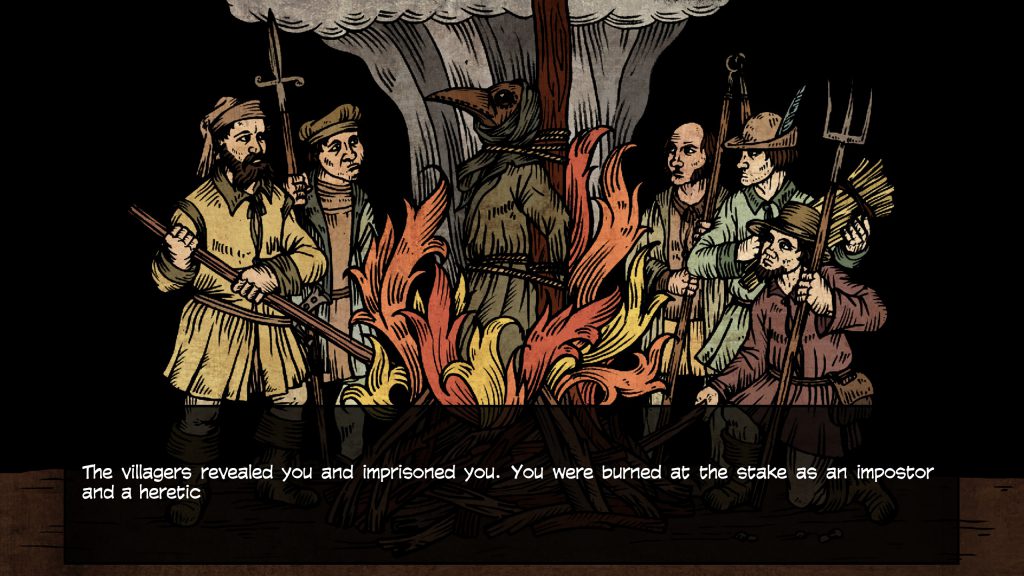 The background music is simple and fits well the setting. The tempo changes in a few instances, making it more interesting. The characters babble in a “simlish” manner, but the plot narration has been read by a voice actor. It has been voiced skillfully, however it is in russian.

The game, although brief, is very enjoyable and provides a bit of escapism. Starting can be a little nerve wracking, as there will be inevitably some patients collapsing before receiving their treatment. Later on the priest and also the drunkard will be the cause of frustration. However this is part of the charm of the game, it always has a challenge for the player.

I would recommend the game to those who are passionate about middle ages, medicine of the past or simply restaurant simulators.