To be quite honest, I never knew about the No More Heroes series, or more accurately any Suda51’s games, until 2019 when Travis Strikes Again released. Well, actually no that’s kind of a lie. After looking at the list of games he worked on, it looks like I did play one called Lollipop Chainsaw, but we’re not here to talk about that one. I certainly had a Wii, but as I was young and my family didn’t really have a lot of money, I didn’t end up getting many games for it. And even if it managed to catch my eye, I don’t think it would have past the parent test. Well, fast forward and the desire of having No More Heroes 1 and 2 re-released on the Switch grew and spiked both at the release of Travis Strikes Back and the news about the third installment’s release window. Though, I don’t believe there was any news about it actually happening other than Suda51 saying he wants to port them and (mostly) everyone was surprised when Nintendo announced that it dropped in the October Direct. Well, let’s get into the first game. 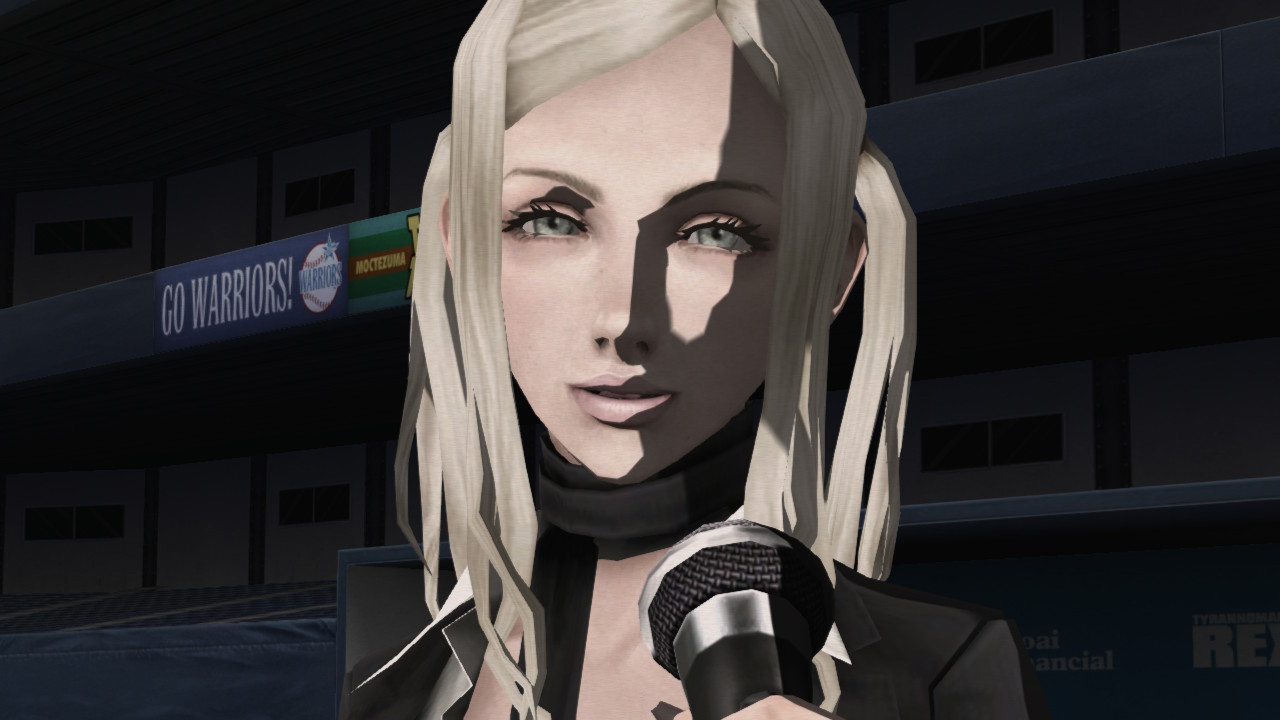 Well, No More Heroes follows Travis Touchdown who is an otaku assassin with an interest in wrestling. Before the game even starts, he meets Sylvia at his local Death Match bar and takes on a job in assassinating The Drifter (aka Helter-Skelter) which unwittingly earns him Rank 11 in the United Assassins Association. So, as he’s already ranked, he aims to get to the top and be known as the best assassin around. Though, the possibility that Sylvia will sleep with him once he does become Rank 1 does motivate him to rise the ranks rather than not bothering after learning that those lower ranked than him will attack him at any moment. 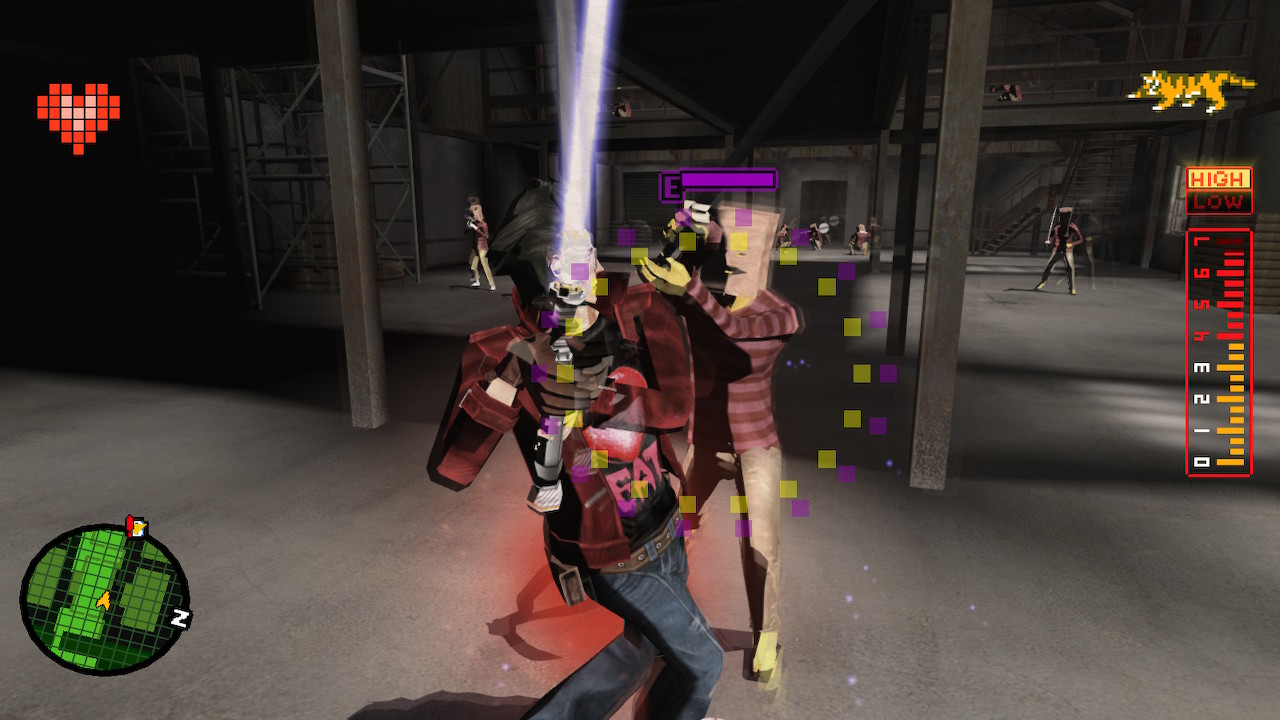 Travis wields a beam katana, the lightsaber’s sibling, throughout his climb to the top. While I do recommend playing this game with your two Joycons detached as there are some motion controls, you can play this on a Switch-lite or with them attached in handheld mode as motion controls will be adapted to the analog stick instead. Attacking is pretty straightforward, but very satisfying, as you’ll be pressing the attack button to whittle down your enemy’s health until you’re prompted to do a finishing move by moving your Joycon in the direction an arrow is aiming and witness your enemy be sliced in half or beheaded. There is a more depth to this that you can take advantage of. You can stun your opponents so you can then grab them and do a wrestling move (which includes you moving both Joycons along the arrows) to deal some damage; vary between high and low stances with your Joycon to get past blocks or a different attack pattern; charge an attack; parrying means fighting for dominance by furiously moving your Joycon, dodging at the right; and dodging will activate Dark Step, letting you get in some quick hits; and getting matching icons in the Death Blow slots will activate various Dark Side trances (though, I was so unlucky most of my trances came at the end of battles).

As you’re attacking and blocking, your beam katana will lose power until it’s all out and you won’t be able to attack anymore. You can charge them at any time, probably when you notice a break in attacks, where you’ll need to promptly shake your Joycon as Travis does it suggestively. 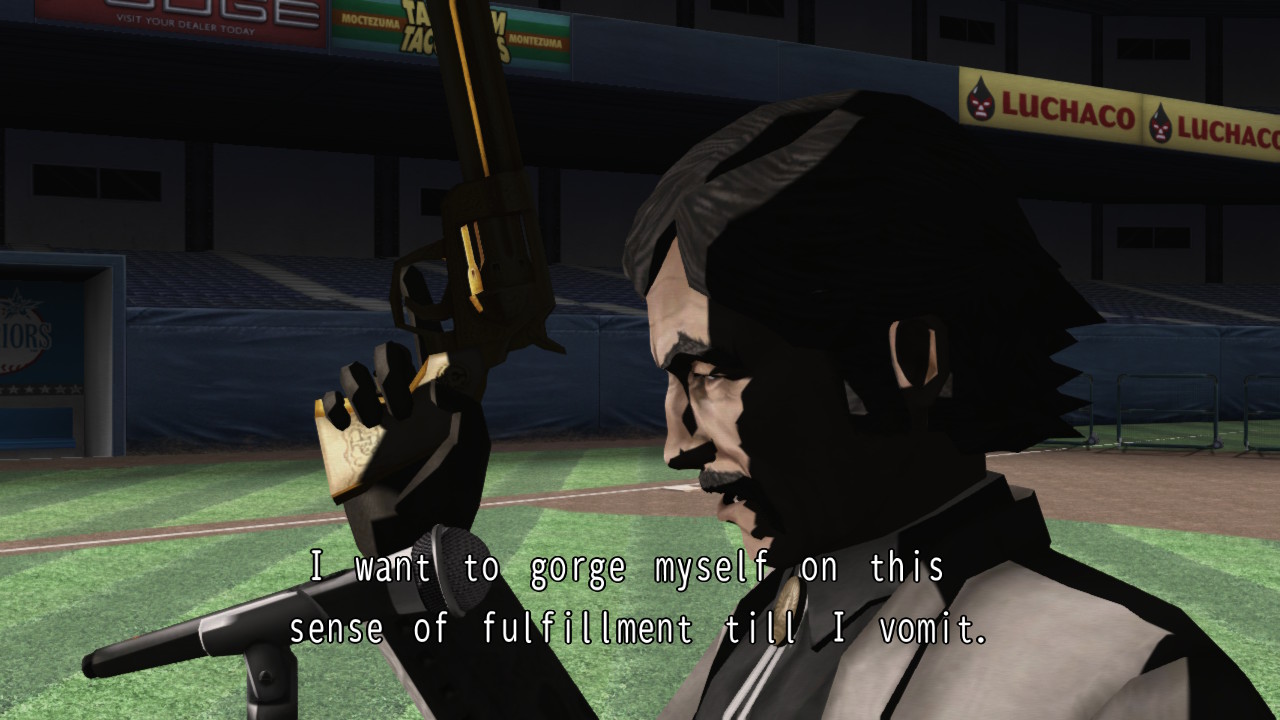 When you’re in Rank fights, you’ll first have to get to them by fighting a bunch of low level goons and you’ll know when you’re going into the Rank fight by a call coming in from Sylvia and a save point being available. The Rank fights are the highlight of the game as you not only will go up against those that do pose a threat by themselves and are difficult to beat (of course, they all vary between each other and players). They all have attacks that are telegraphed, and as the fight goes on, will add in some curveballs to keep to fight fresh, difficult, and some will even have an attack that will kill you if you don’t dodge in time. Despite not getting much of them before they’re killed, I loved how all of them are characterized by their cutscene, how they carry themselves, and how they fight (which makes every Rank fight different). You even get more glimpses into Travis as well. To quickly name a couple of the early assassins as examples: you have Dr. Peace who abandoned his family for his life as an assassin, likes to keep a distance between his opponents (but won’t back down from a position he likes) and likes to sing; Shinobu is the youngest of the bunch, but is very serious, has her own set of ideals, and is way too good to just be Rank 8; and Destroyman is a total loser wannabe who sees himself as a superhero, but won’t hesitate from doing some underhanded moves to get some attacks in. I looked forward to each of these fights and the satisfaction that comes with finally beating an assassin.

Though, before getting into your Rank fights, you need to pay an entry fee. Which, as you guess, raises as you rise up the ranks. And, well, you don’t get enough money straight out of finishing a rank fight. First, you’ll have to do a mundane part-time job, like mowing the lawn (which is the one that I personally hate) or being the guy that fills other people’s cars up with gas. After finishing and getting a good enough score, you’ll be trusted enough to take on a side job involving killing people. Apart from doing these side jobs, there are a couple things you can do and spend your hard-earned LBs on. The town of Santa Destroy is open for you to ride your motorcycle through, no matter how empty it really is. As you’re driving between the job centers and the job location, why not stop by to buy some more clothes, VHS tapes, Naomi’s lab to grab upgrades once they become available, and train with Thunder Ryu. Of course, this will put you in the hole and require you to grind out some LBs to get pay the entry fee (or be able to get/do these things you want), but it’s worth it so you can be more powered up and run around in clothing you want to wear. 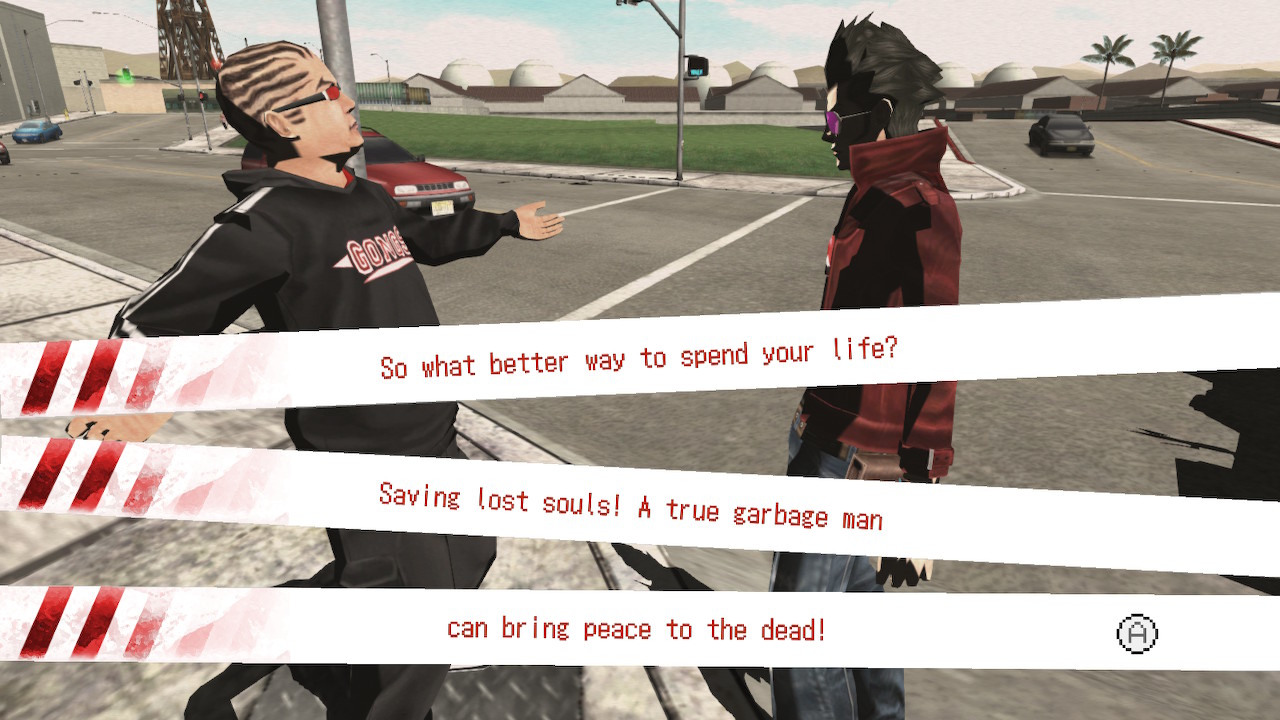 There are some collectibles you can get. As you’re fighting your way through the ranked assassin’s goons, there are trading cards scattered around and hidden in treasure chests. In Santa Destroy, there are 49 Lovikov Balls to find and turn in to a local drunk to get some special techniques. Luckily, you won’t have to scour the entire map and worry that you missed a small hidden corners as they’ll appear as orange dots on your map. The only thing you need to do is to get Travis there and don’t get as upset if it ends up being a treasure spot. 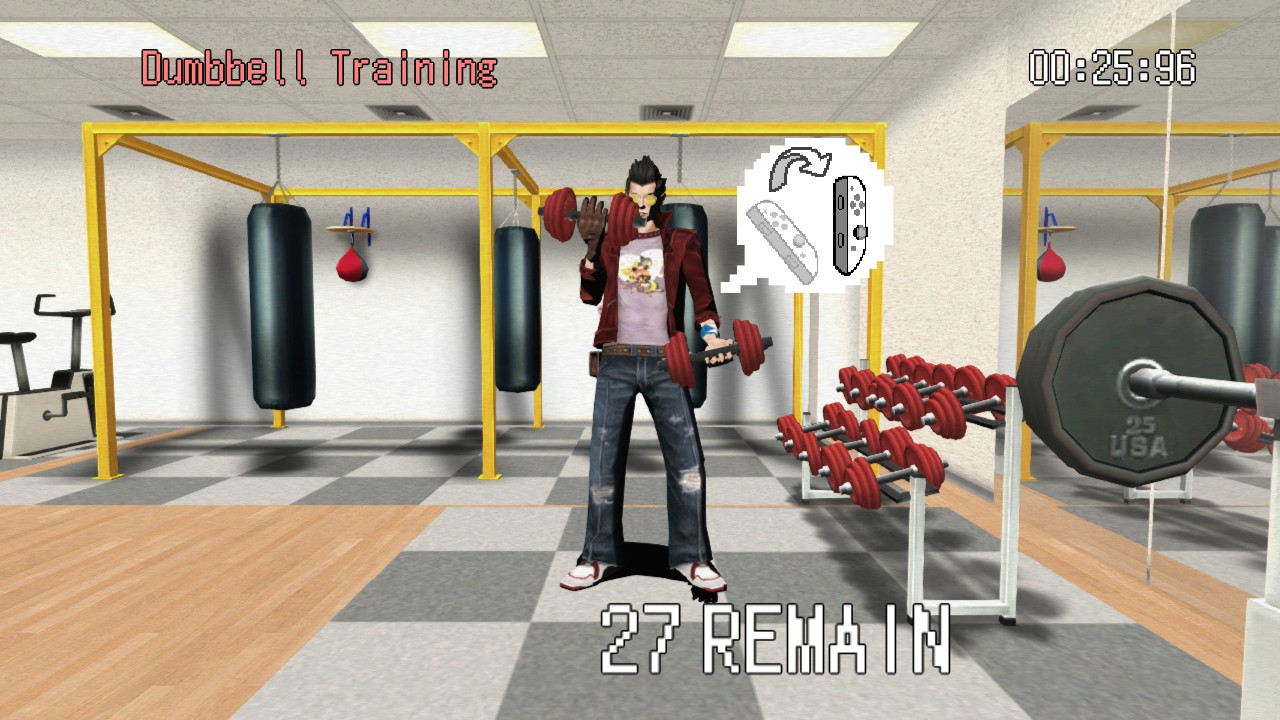 There is a secret ending that will unlock if you buy all beam katana models, so be careful in overwriting your save unless you’re okay with going through New Game+ (which will carry over everything, add in a Bitter difficulty mode, more trading cards that contain concept art, and unlock more shirts). This will put you in the hardest boss fight the game has to offer, which is real satisfying to finally beat, and you’ll get the last cutscene of this game.

In terms of this port, it very is well worth picking this up. As you can probably tell from screenshots, this keeps the original Wii graphics (in contrast to the PS3/Xbox ports that didn’t have the shaders used) and it can even keep the Wiimote + Nunchuck because of the Joycons. On that note, I didn’t have much trouble with the game detecting whenever I was angling, swinging, or shaking the Joycons for the most part, but there were a few moments here and there when it didn’t (though I did catch that some were due to my Joycons randomly disconnecting from my Switch during gameplay). Other than that, loading times are fast and I didn’t notice any noticeable dips in framerate other than in the secret ending fight. 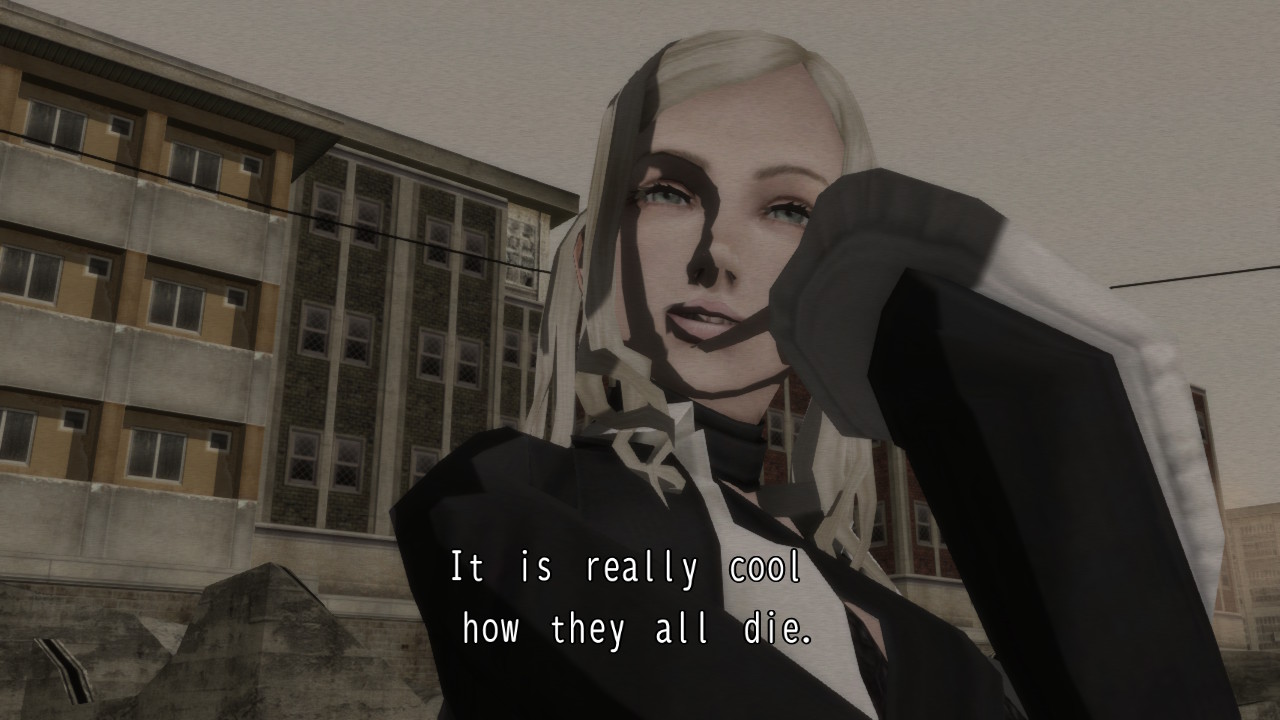 While not many will end up liking No More Heroes, it is definitely worth picking up if you’ve been interested in playing it (but couldn’t), like hack and slash games, and even those that already played it back on the Wii. I totally get why a lot of people love this game and I couldn’t be happier that I got to play it rather than just watching the cutscenes or a recap so I can understand the story before going into No More Heroes 3. While there is downtime as you’ll be riding through Santa Destroy to get to locations and getting LBs to pay for your entry fees and your desires, it seriously is a really fun, and at times challenging, game that I didn’t want to put down, it does a great job at characterizing its characters, no matter how short their appearance might be, and it was surprisingly funnier than I expected.

Now, it’s time to get to No More Heroes 2 and thankfully there’s no need to wait.