CD Projekt RED finally delivered their extremely hyped cyberpunk-themed RPG, after so many years of waiting. Despite many merits, CP 2077 launched with devastating technical problems on all platforms, but will certainly be a real gem once all issues are addressed. Find out more in this review.

Cyberpunk 2077 (CP 2077) is an open-world action RPG set in Night City, a sprawling techno-metropolis built by the mega-corporations that rule the world. In a dystopian future where violence, corruption run rampant and money is all that matters, players impersonate “V” – forced to become a gun-for-hire after their previous life is shattered by a chain of events. Along with their longtime friend Jackie Welles and other characters, V will be struggling for survival, money and fame in the ever-risky life of a Night City mercenary.

No, YOU are breathtaking!
Even with all the performance issues, CP 2077 proves to be an outstanding technical milestone for gaming as a whole. A bustling, crowded metropolis is recreated flawlessly, with imposing skyscrapers and neon lights dominating the skyline. In more open areas such as the Badlands, desolate plains full of wreckage span for miles, with Night City always dominating the landscape in the distance. At the same time each location is rich with individual details, which wouldn’t be expected given the overall scale of the environment.

Content, so much content.
This title is abundant with side-missions and activities. From police department calls to help fight crime, to mercenary contracts given by the city’s Fixers or unique side-quest lines featuring significant characters, CP 2077 has it all. The amount of actually handcrafted, unique side-quests with their own plot and variations is great – while even in the small-time jobs like police calls, there is always some lore to be found that tells a small story. Since most of these activities award achievements, unique weapons, vehicles and gear, they’re definitely worth doing.

V whoever you want to be
The character build possibilities offered by CP 2077 are deep and varied enough to warrant multiple playthroughs, to experience the diverse possible playstyles. Since there is no way to max out all attributes in a single run, many gameplay-changing implants and skills will be locked out at some point. The game as often RPGs do, favors min-maxed builds over hybrids. From hulking metal-clad behemoths armed with machineguns, to stealthy netrunners using hacking and subterfuge to succeed, V has many possibilities to develop his or her skills in a unique way.

Fear & Loathing in Night City
The storyline of 2077, and to a lesser extent its most substantial side missions, are both well written and interesting. The characters surrounding the odyssey of V are distinct, coherent and fleshed out very well. Though not all of them share the same personal evolution in relation to the events, they stay in-character till the end. The plot itself is interesting especially a bit later, and uses good quality art direction along with music to create the necessary pathos when needed. Choices are not as broad as one would expect from a RPG, but they open up a lot more towards the ending parts. 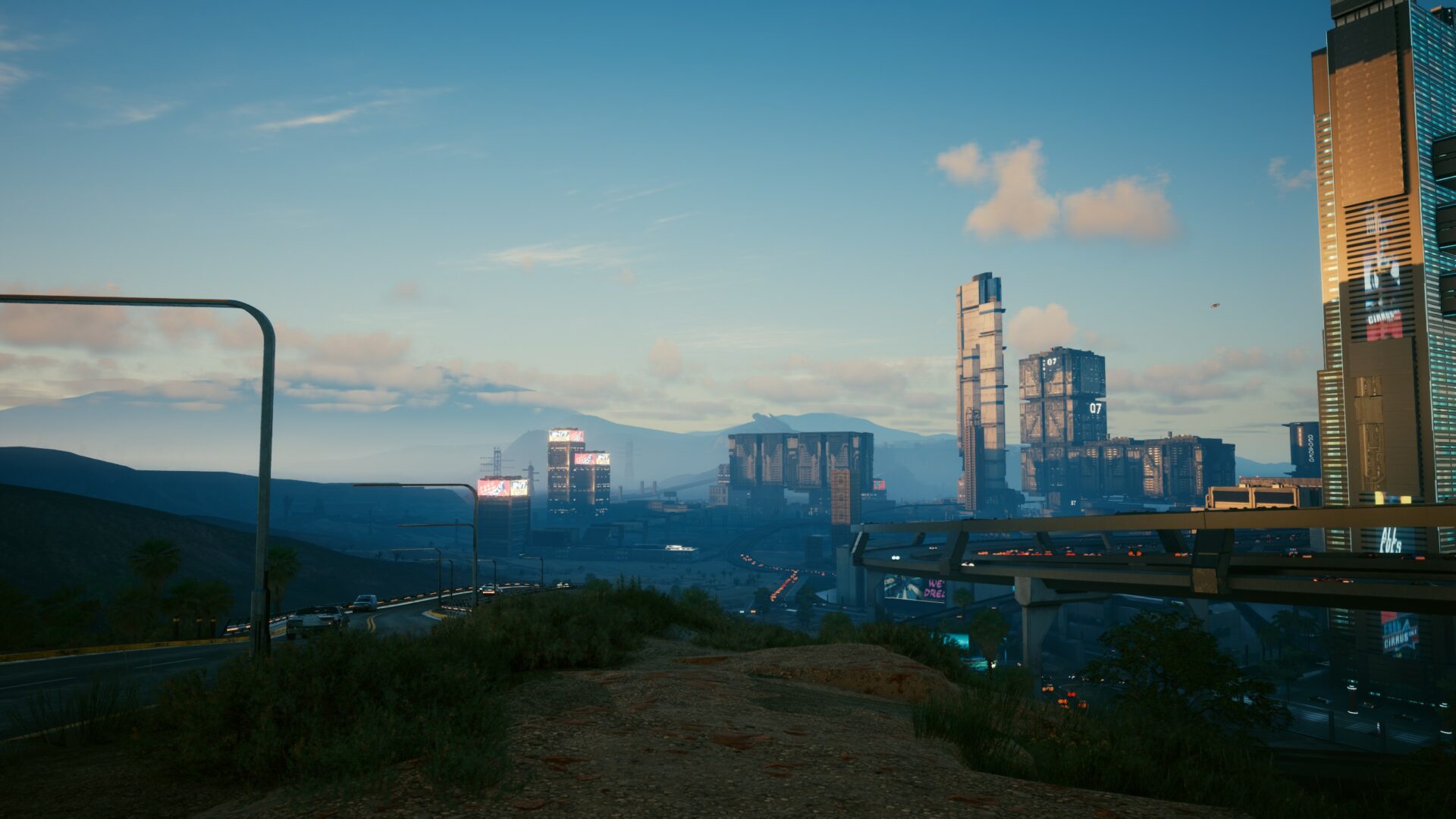 Cyberbug 2077
CP 2077 is one of the most bugged AAA releases I have ever seen, on par with new Vegas at launch if not worse, to give the idea. From minor glitches such as people disappearing as soon as V turns, to game-breaking issues like quests getting stuck or mission critical items simply not working, there is just an immense amount of problems. The game is playable, but hardly really enjoyable. This is not the state in which a game with this much budget and dev time behind it, should come out at any point.

The chosen one?
Balance becomes an issue in late-game, as V will acquire so much powerful hardware and perks, to become very close to Neo in Matrix in terms of power. One-shotting any non-boss enemy will become more and more common even on the hardest difficulty, while even bosses become only a nuisance once level cap is reached and all the best gear is acquired. This makes supposedly legendary enemies become underwhelming, and their fights much less epic. 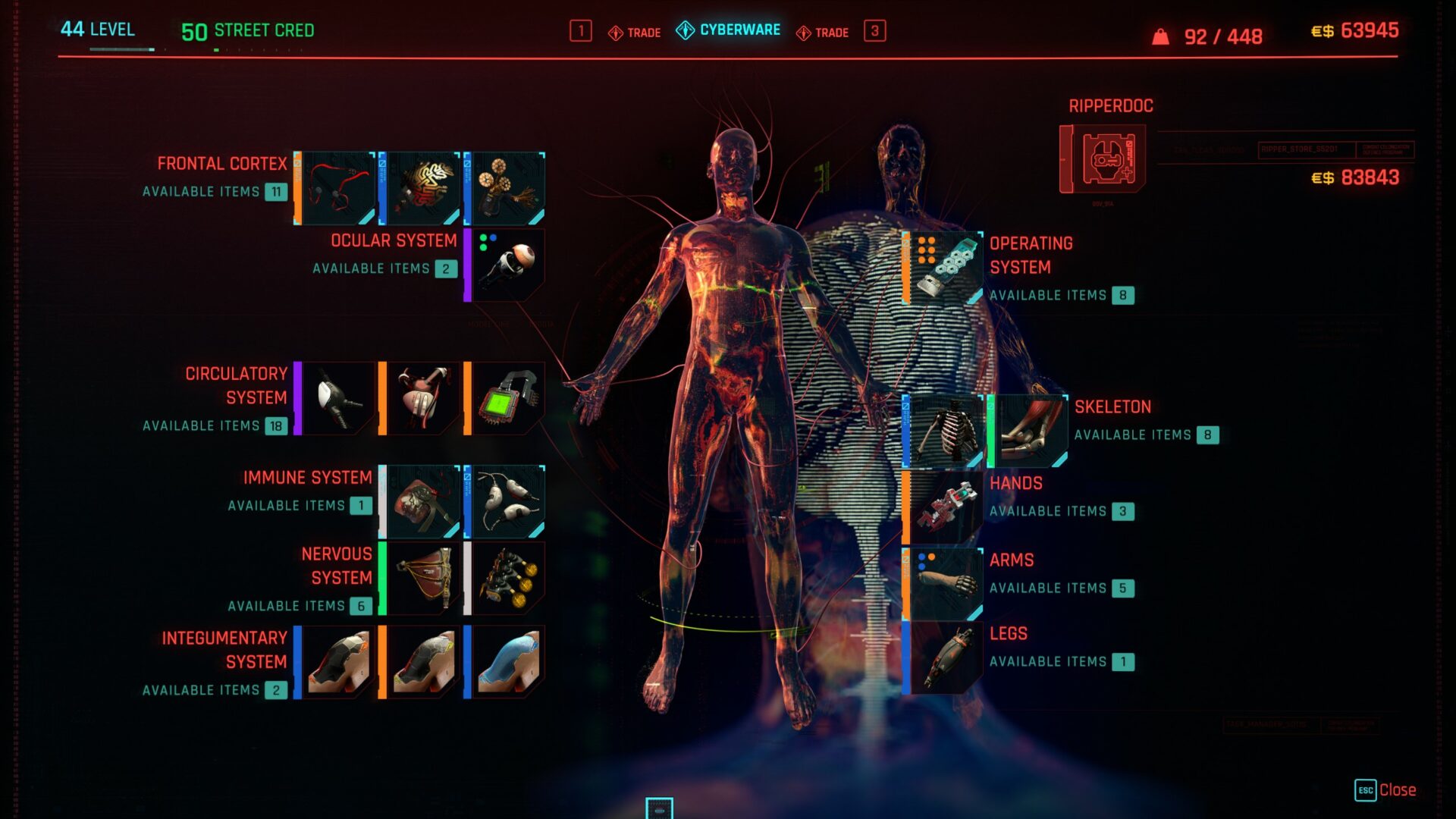 Exploration
Is performed on foot and with vehicles, progressively obtained by purchasing them or from certain quests. Fast travel terminals are also present in the world and unlocked by going near them. Night city and environs form an immense amount of space, but fortunately all relevant missions are already highlighted on the global map for convenience. Each location of both main and side missions often houses secrets and plenty of loot, other then lore documents to know more about the world. At first only one sector is available, while others are unlocked a bit further in the main storyline.

Combat
Plays out in first person, with an equal focus on firearms and melee weapons depending on one’s style. Both weapon categories have different mechanics, for instance melee ones can block, parry and counter, while each ranged weapon class feels different to handle and can mount specific accessories. Hacking is also a strong component of any fight, with hacks capable of disrupting enemy weapons, turn machines into allies, or even instantly kill someone. The environment can be a formidable ally, with explosive containers and similar items being plentiful. Implants, mods and perks can change how combat plays out significantly: some slow time, others allow using unique ammunition or specialized hardware.

Character Management
Is performed via a series of menus including inventory, crafting and cyberware. Most customization can be done anywhere out of combat, while to change implants, V has to go to a Ripperdoc and undergo surgery. Weapons can be upgraded with Crafting to get better stats, though it becomes more and more expensive each time. In the same way items can be scrapped for materials or sold to merchants for a quick buck, though this is worthless until late game. Attributes and perk points are awarded each level or from certain rare items, allowing the creation of a specialized build with several skill trees to match each. 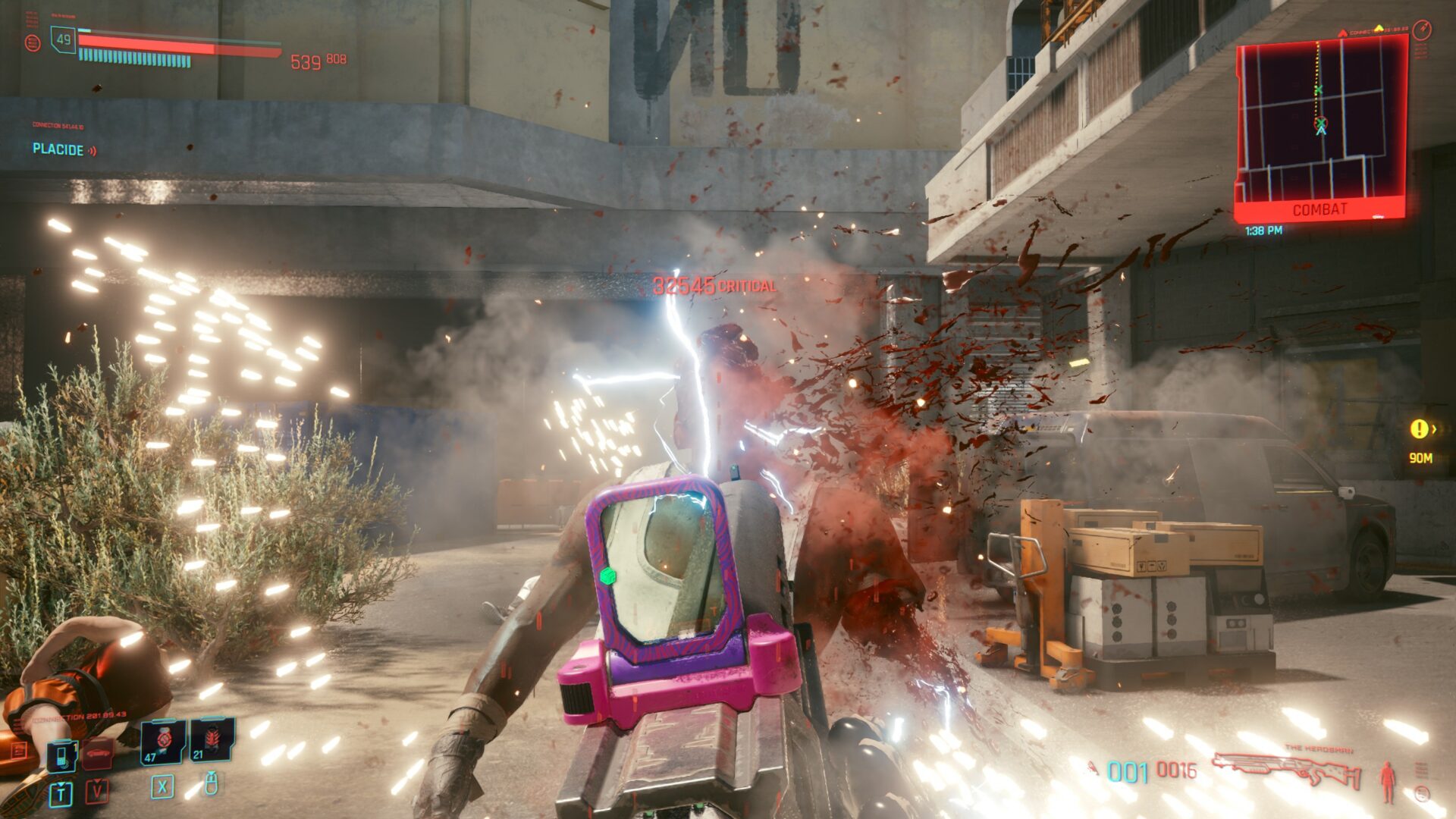 Critical Problems
– Both main and side quests can irreparably break occasionally.

Bugs & Other Issues
– I would need an entire other review to list all the moderate / severe bugs worth mentioning.

It took me 80 hours to complete all side content (that didn’t bug) and finish the main storyline on Very Hard. For the price of 60€, the content amount is more than fair with a good replay value to try out different builds. However, the game currently has MASSIVE bugs and performance issues, I recommend waiting 1 YEAR before buying. It’s an excellent title, buried under a mountain of problems.