A great sequel to a good first game, welded with sturdier gameplay materials, but slightly brittle in the story ones with a few rusty industrial pins on the technical side.

Deck13 have risen far from their bland and uninspiring Lords of the Fallen outing and have crafted a good mechanical and industrial soulslike in the first The Surge. With the second one, they’ve elevated dancing, stamina based combat, meaty and gory dismemberments and a small, compact world full of twisting paths and shortcuts to an artform.

The Surge 2 puts you in the role of an anonymous Jane/Joe Doe, flying into Jericho City on a plane that gets knocked out of the skies by some kind of disaster. After a few flashbacks of a young girl that was seemingly on the plane with you, you wake up in a prison hospital and need to punch, chop, sever and mutilate your way out through some escaped prisoners, security bots and a heated fight with the prison warden.

The story quickly dissolves into typical sci-fi meanderings of AI, mergers of man and machine, some kind of cyberdisease called Defrag, grizzled military jacks, nano machines absorbing everything and turning the world into Grey Goo and all the other tropes you can imagine. Tried and trusted. There are a few interesting characters and some side quests thrown into the mix, but they all seem to be on the comedic side and are not really taken seriously. 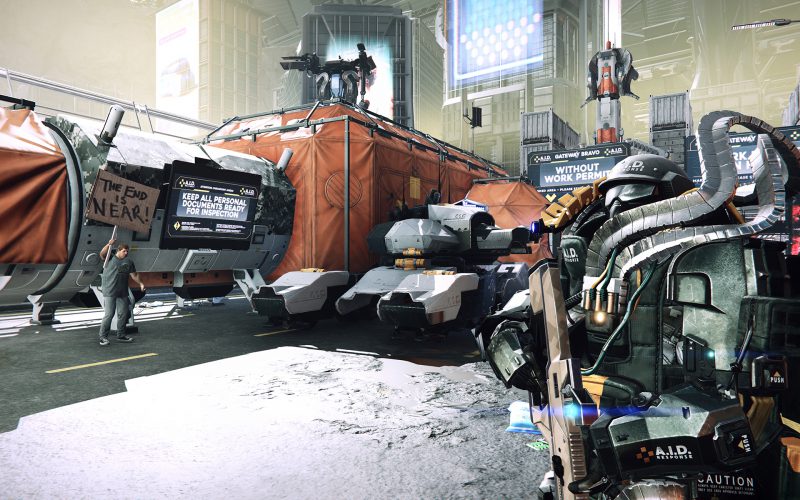 The true stars here are Jericho City itself, with it’s districts, twisting and looping alleys, passages and shortcuts, the game’s flowing, breakdance style, chunky combat and the satisfying character progression of collecting weapons and armour pieces and mix and matching them until you’re satisfied with the bonuses. Or fashion, like any true Souls player knows.

Combat is very dancelike, swings and stabs pushing you forward or sideways as you execute them, swankily melding into finishers and limb chopping. But beware of button mashing. One button press does not always mean one swing and overeagerness will quickly drain you of stamina and leave you exposed. And you will die fast, as enemies pack a real punch, and will flatten you with just a few swings. 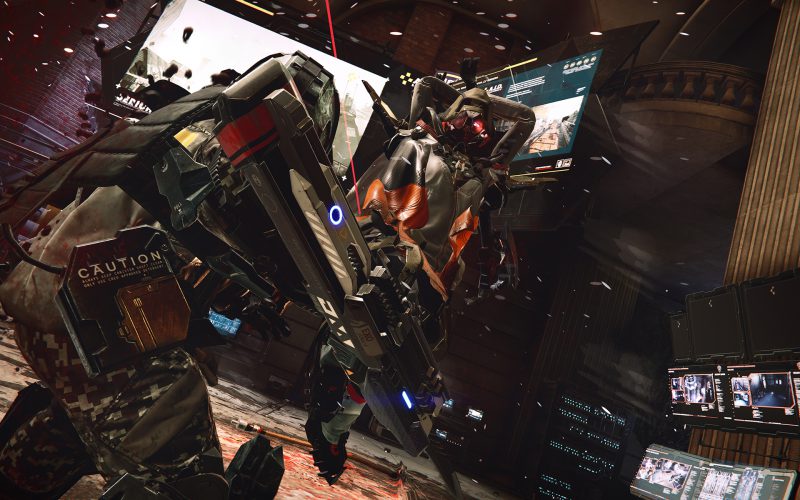 Dodging doesn’t really give you any iframes and you need to pay attention to the direction of enemy swings. Directional parrying is also a great addition to the game, allowing you to quick parry enemies, temporarily stunning them and allowing you to execute huge hits. When you master this, it sometimes feels slightly overpowered. Battery power, usable for healing, finishing moves and several boost injections, is gained by attacking enemies.

There’s a large amount of different armours and weapons you can cleave and scrap from various gangs, military and robots wandering Jericho City. Targeting individual body parts and then breaking the armour allows you to do a finishing move when the enemies’ health bar drops low enough, divesting them of the targeted part with an assortment of deathblow animations. When you do it for the first time, you get a schematic for the part, each subsequent dismemberment gets you upgrade parts depending on the level of the enemy.

Armours come in three classes, operator, sentinel and goliath (light, medium and heavy) and give half and full set bonuses usually corresponding to the type of armour. In combination with a plethora of weapon types, from one handed metal scrap blades to giant military axes spewing electricity, you can create builds that focus on specific game mechanics. You could be a heavily armoured tank that relies on blocking and parrying to deliver monstrous blows with a giant piece of machinery or a nimble, fleet footed warrior that uses quick stab attacks with a spear and has reduced stamina costs for dodging. 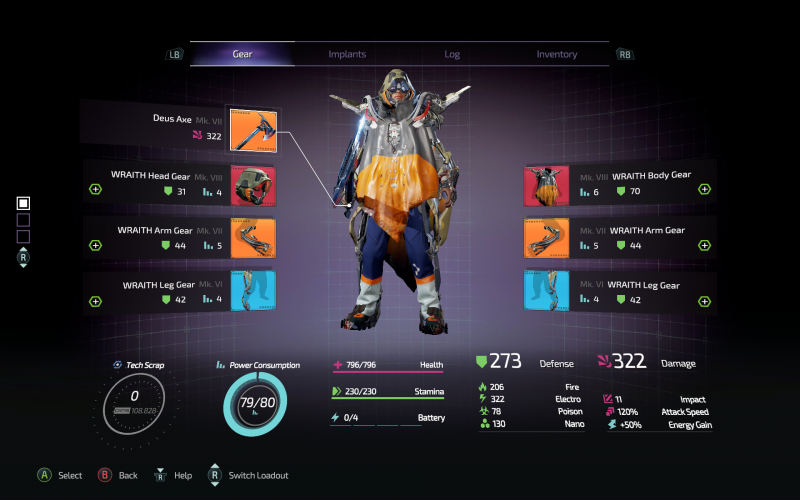 The drone got a hefty upgrade from the first game and is really useful this time, coming with a few different weapons and abilities. You’ll acquire it very quickly and there are armours and implants that synchronize very well with it and it can become a viable build.

You can freely combine and experiment with different builds and your basic stats can be reset for a very meager tech scrap cost, the game’s currency for upgrading. You can further boost your build mechanics with implants, adding even more stat and ability boosting bonuses. Each armour part and implant uses power that increases with your main level. The better the armour part or implant, the more power it uses. A minor gripe, certain combinations become a bit unbalanced and very powerful and can easily make the game a breeze or a leisurely stroll to the end. 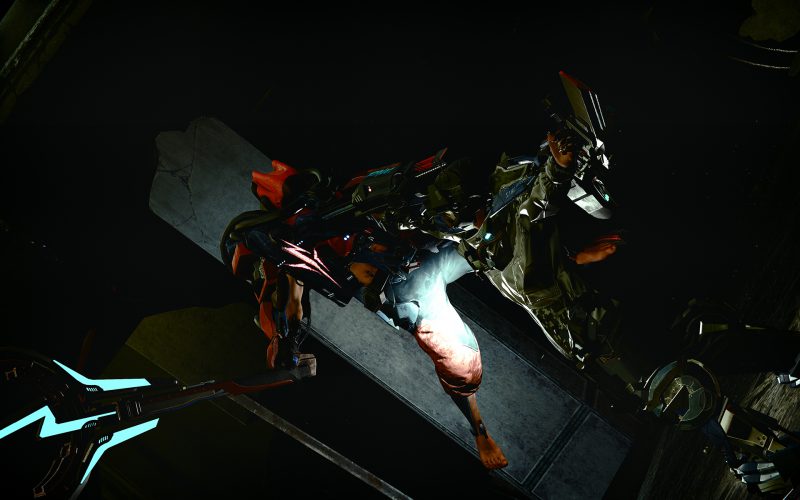 The bosses are kind of uneven. Some are very easy even with inferior equipment, while some are annoyingly tough, multi phased, with weirdly directed attacks and iffy animations to judge them properly. Even with that, levelling, properly equipping yourself and learning those janky patterns can turn them into milder irritations.

Medbays are positioned fairly and finding the shortcuts will sometimes surprise you with how well they loop around and make your trips to the boss fights or the place where you got your head smacked in, losing the scrap, short and relatively hassle free. Online play consists of painting graffiti with your drone, leaving messages or a mini game of hiding your banner and the less players find it, the larger your tech scrap reward is when time runs out. It’s a bit useless and gimmicky. You can easily farm more scrap than the mini game gives out.

The arhitecture of the City, lots of tight corridors and a few bosses that move fast do cause some camera problems. In the boss fights, you can usually outdistance it until the camera settles down, but tight corridors are another pair of gloves, often causing you to take hits because you’re staring at a piece of a brick wall or steel instead of the enemy. And there were some visual bugs and glitches, but nothing major or game breaking.

The Kraken DLC, accessed rather late in the game, continues with the man vs. machine story, puts you on a decommissioned aircraft carrier, VBS Krakow, and pits you against robotic pirates in a strange 90’s sitcom neighbourhood built on the carrier. It’s a bit short, with some tough enemies and a combat arena when you finish, but is otherwise just more of The Surge 2. And that’s a good thing. All other DLC’s, even the paid ones, are purely cosmetic, bring nothing to the gameplay and are easily avoided.

The Surge 2 improves on the first game in every way. From the bedlam that is Jericho City to the really crunchy, satisfying combat, Deck13 have fused very solid gameplay parts to some slightly brittle tehnical and story ones, but have made a sturdy, enjoyable compound that stands as a solid and competent soulslike.