Take on the role of the leader of a camp of survivors and do your best to overcome the many challenges that threaten the lives of those who follow you in this post-apocalyptic city builder. On a more pleasant note, at least you’re not at risk for becoming a zombie snack this time around.

City builders come in many forms. There’s the classic SimCity (the fourth entry being the best, avoid the most recent release at all costs) formula that’s been vastly improved over the generations from something that was fairly simple to the more complex simulations of the modern gaming era like Cities: Skylines that currently holds the genre’s crown. There’s been plenty of innovation in recent years, though, and it has led to some exciting breakthroughs like Banished, Tropico, Frostpunk, Foundation, and hell, we’ll even include Townscaper here for giggles.

That said, it’s another genre that seems to spawn plenty of subpar titles that end in disappointment. Fortunately, Surviving the Aftermath isn’t one of these, at least not yet. In its current Early Access state, it already shows promise and is worthy of keeping your attention for some time, though it doesn’t have nearly the same pull as the heavyweights in the genre.

Surviving the End of Days

Building and maintaining your camp and its residents is the primary focus of Surviving the Aftermath. Starting with a small campsite and expanding it with a few tents and simply resource collection buildings, your base will slowly spread across the settlement map. The general feel of this reminded me of Banished; job openings are available for work buildings that you’ve constructed, though, without a skill system, each individual varies little from the others. Each and every one is equally as effective at any given task under the same circumstances and you won’t end up with experts of any sort. In addition to this, a lack of character portraits makes it so that you’re likely to have several survivors sharing the same portrait, even in your first batch of arrivals. As far as immersion goes, it’s damn near a sin. 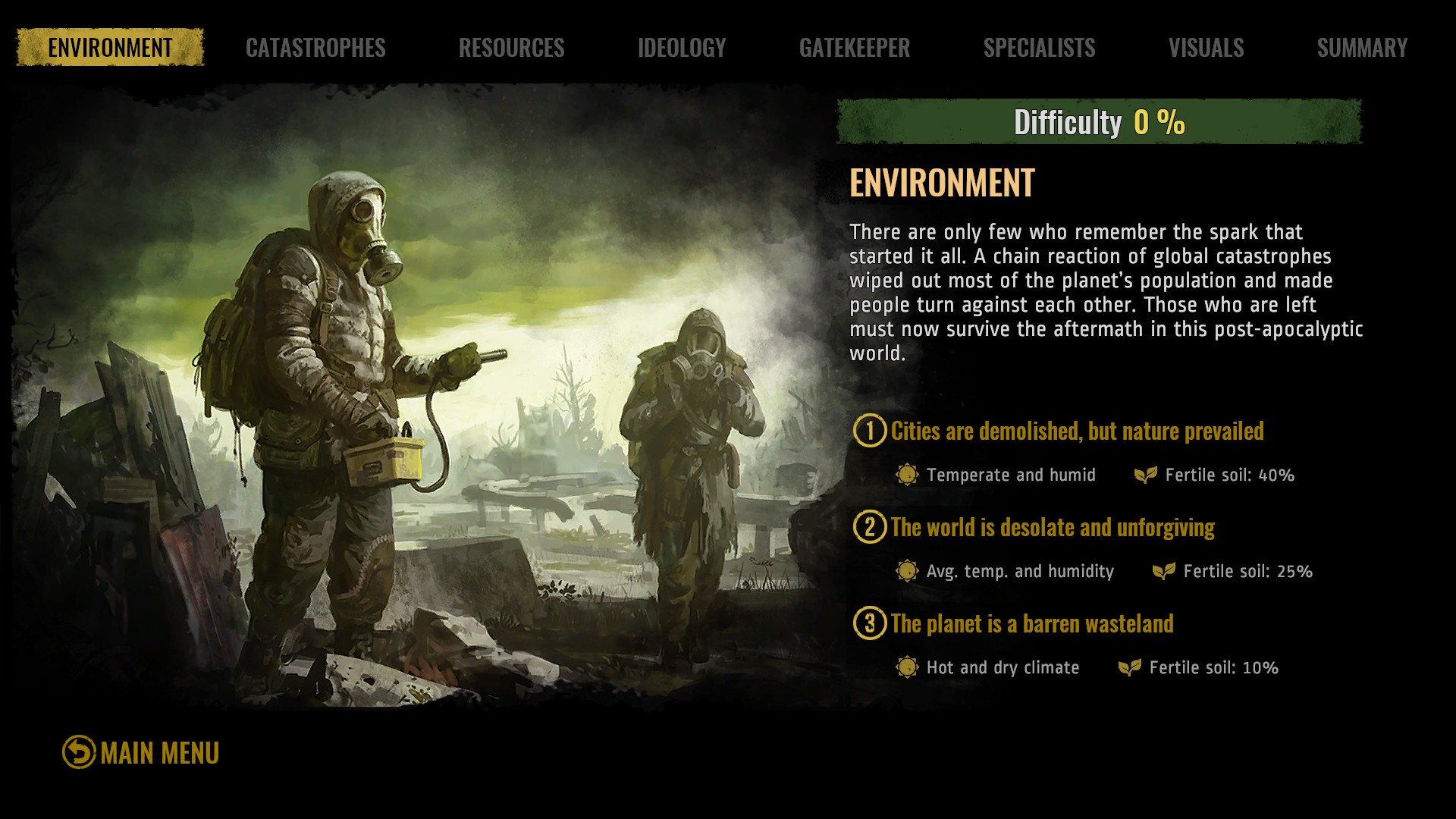 Resources are varied enough that you’ll continually be managing your workers by shifting them to new areas. Buildings tend to have a work zone that can be set manually which is a nice improvement over many others in the genre. Gone are the days where you would need to build a new woodcutting post as here you can simply reassign the building’s work area. As it’s a post-apocalyptic setting, there are some interesting resources outside of the norm here, such as plastic and scrap metal, though old school favorites like meat and hide are waiting to be harvested as well. 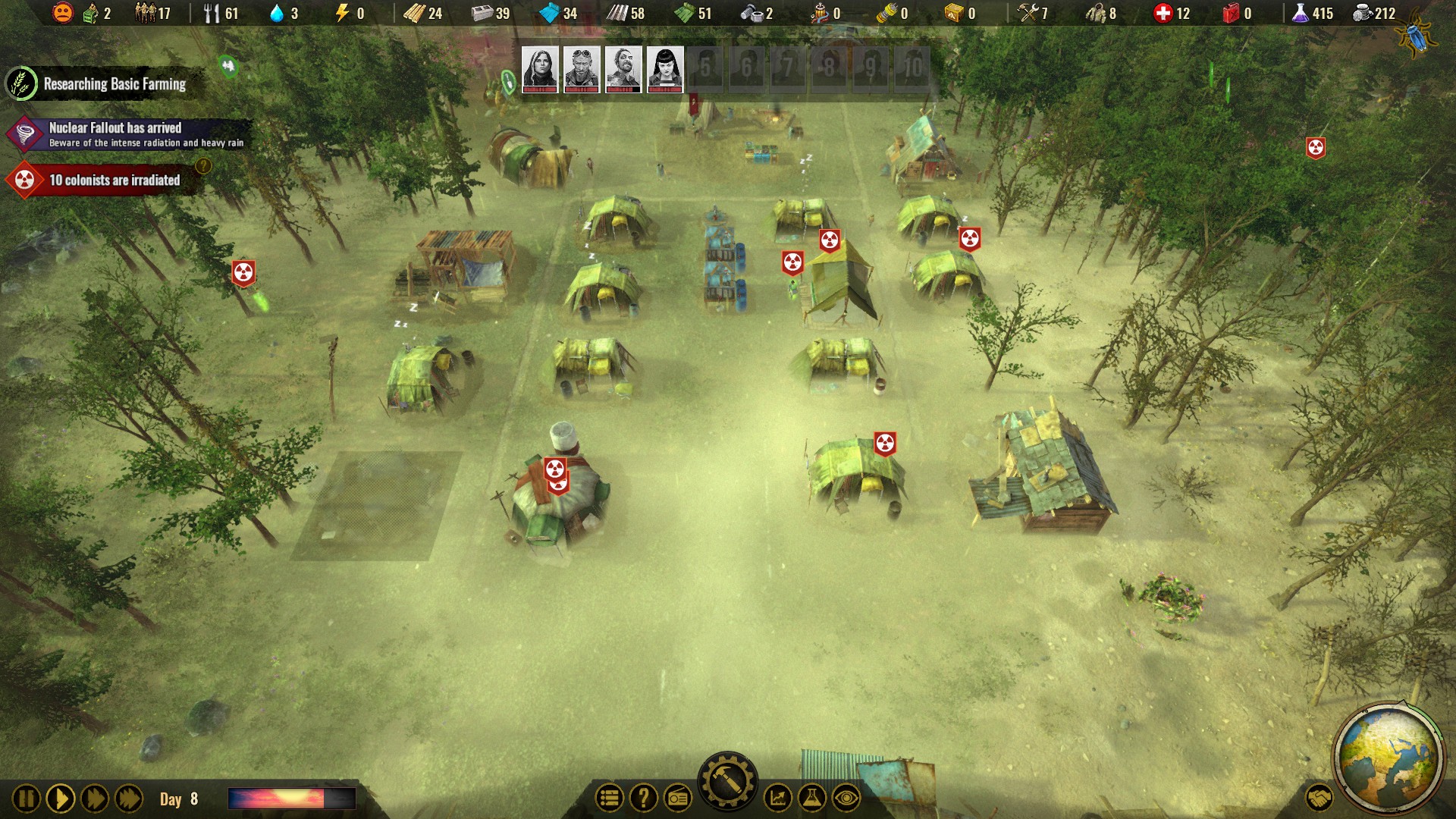 To overcome the complications of the post-apocalypse, research is needed to maximize the base’s capability to survive. Several different paths can be progressed down at the pace that you choose. For example, if you want to crank up your base’s living conditions, you can focus on both passive bonuses for buildings that you already have access to and unlocking new types that are full-on upgrades. Alternatively, if you want to crank up the production aspects of the colony, a similar template exists for structures and their related jobs. 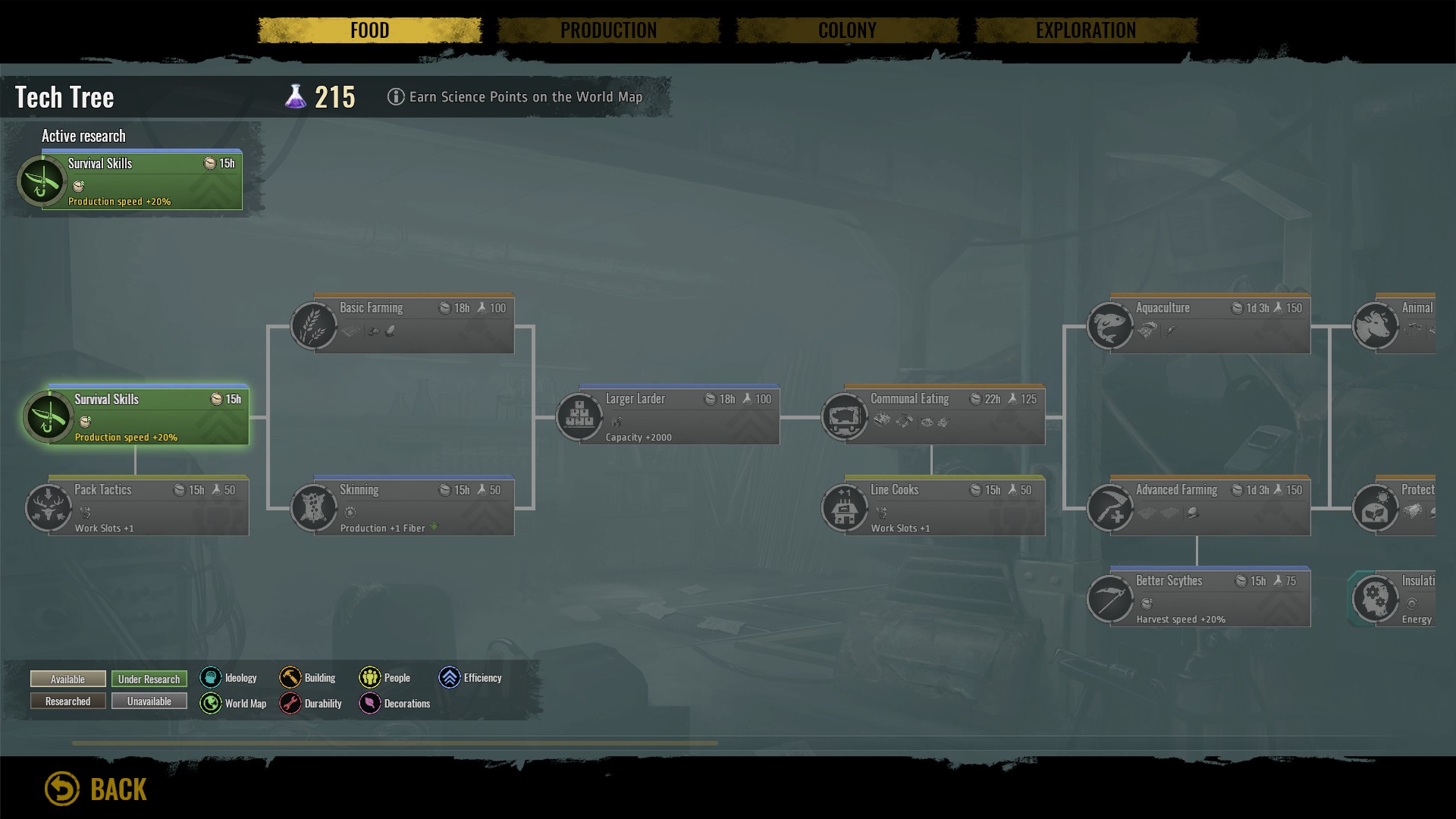 Though your colony mostly consists of buildings and generic survivors, you’ll also have some heavy-hitters in the form of specialists. These characters have a set of stats that include their map speed, attack power, research aptitude, scavenging capability, and recovery rate. They’re capable of carrying out specialized tasks that can give huge bonuses to your settlement, particularly when leveraging their class to do so. Your colony starts with only a small handful of them, but even a single fighter can lay down a beating on early threats and scavengers, scouts, and scientists all bring their own nice (and expected) benefits to the table. 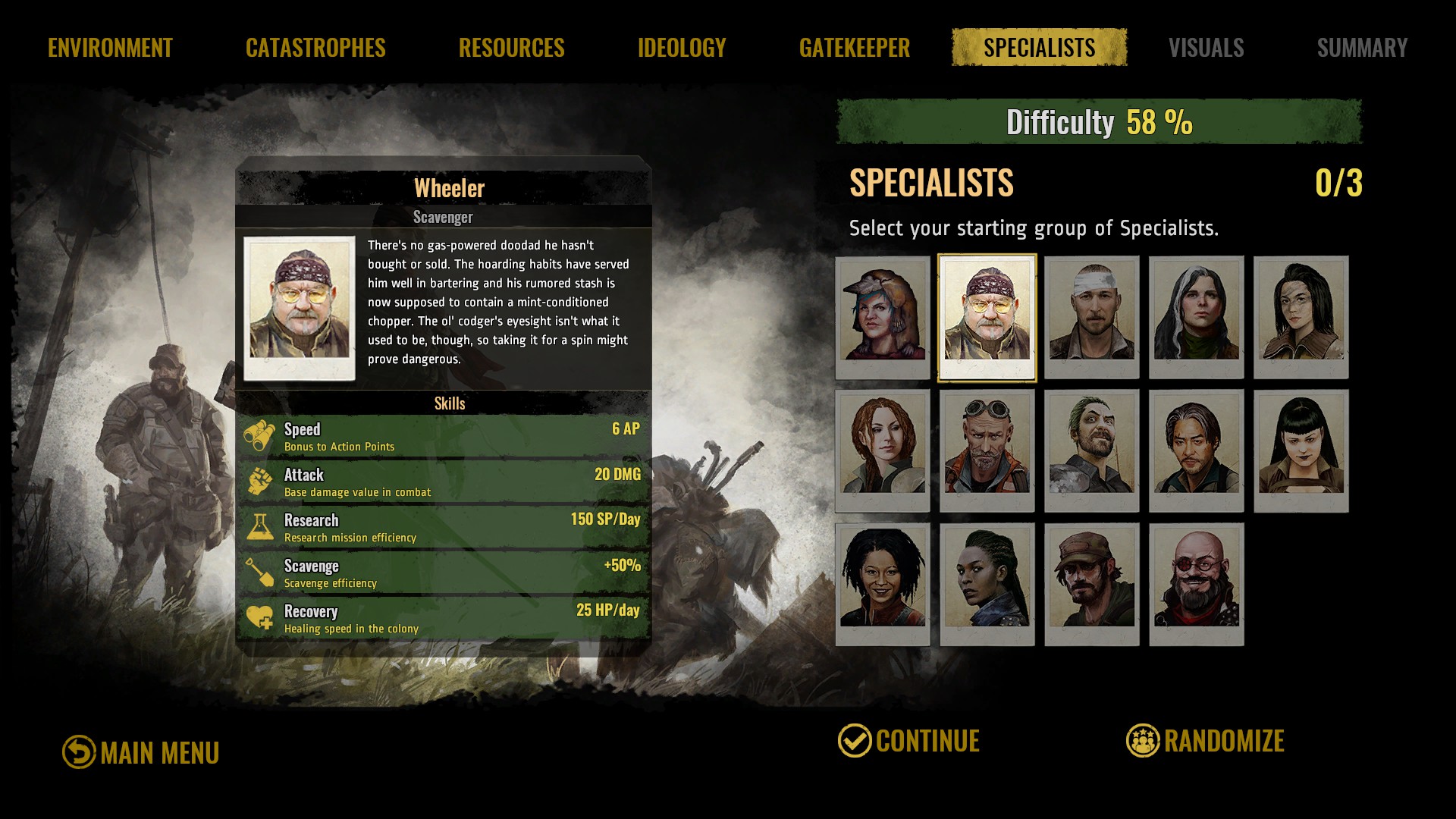 Wonders of the World

The world map can be visited by your specialists and features a variety of locations that can give you some significant advantages if you prioritize acquiring them. Each region needs to be explored by one of your characters and often require the violent bandits that reside there to be cleared out. The effort to do so is often worth it though, as locations are frequently packed full of large quantities of resources that would take a significant amount of time to harvest back at your base. Though it’s simple, you have to micromanage each specialist individually which ends up being a huge time sink that isn’t particularly exciting even if the rewards tend to be worth it. 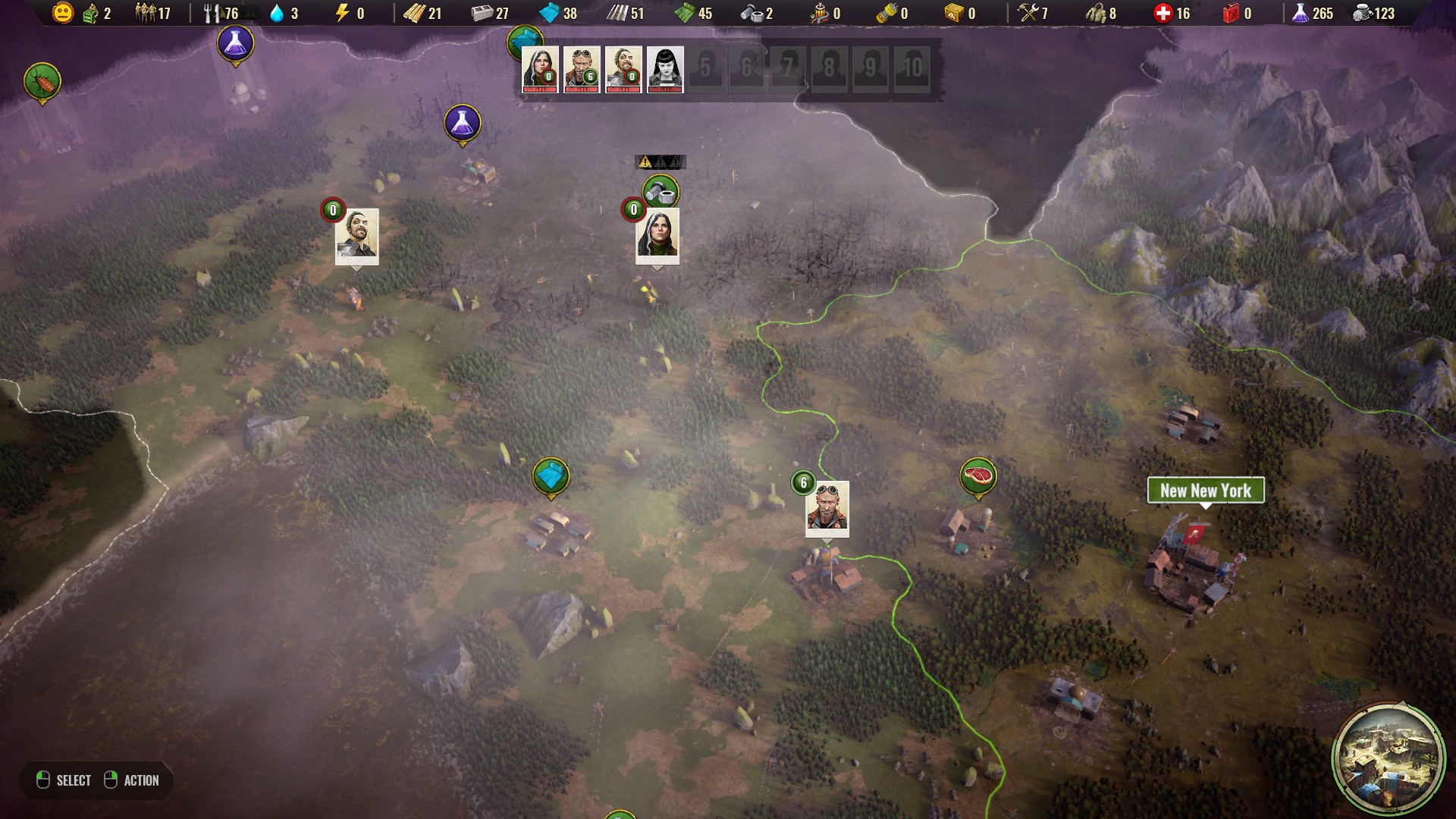 Surviving the Aftermath is a title that functions as advertised, though it needs quite a bit more love for it to be able to compete with others in its genre. Though there are four independent tech trees that can be progressed down freely as time and research points permit, most of the game seems too simple to keep an experienced city builder or strategic survival player invested for more than a few hours currently. If you’re dying to get your hands on something new in the genre, I could cautiously recommend this title, though only on a decent sale as I can’t at all recommend it at the current $25 price tag when you could get far more bang for that same buck. That said, the potential is certainly there and if it keeps received sizable updates and a few more innovative elements are sprinkled in, it might be worth your attention.