An excellent Terraria-like sandbox that delivers a satisfying experience thanks to solid variety, enjoyable progression and well thought out quality of life, while also original mechanics.

Crea is a single-player and co-op open world sandbox set in a once prosper fantasy world, now corrupted by chaos. Players impersonate a hero, which has risen to challenge the corrupted Gods, fight the evil that plagues the world and restore things as they should be. Starting out with nothing, one has to build a base to then craft, fight and research their way to success – while also finding the truth about past events.

Mastering the Forge
Gear crafting in Crea is done with a brilliantly designed system. To make each equip piece, a mini-game has to be played in which one needs to get as much Quality as possible without running out of Balance. To achieve this, many skills become available with various effects – enabling the counter of random modifiers that keep appearing during crafting. An entire skill tree is in fact dedicated only to this process, as the game goes on also Enchanting Gems and Consumables come into play at some point, further expanding the mechanics around it.

Expect the unexpected
At all times, this title delivers a solid variety of monsters, random events, equipment types and progression possibilities. While the world is not THAT big, it has a lot of content that expands with progression. In addition to unique attack patterns and stats each, monsters appear in upgraded or entirely new forms as the game goes on, while random events and dungeon portals provide constant novelty. Abandoned treasure vaults, unique gear pieces, elite monsters, blueprints from an ancient past waiting to be deciphered, are only some of the things one can encounter or collect.

One hero, many paths
Crea offers several skill trees one can invest into, that translate in different playstyles. Be it melee, ranged weapons or magic, each approach is equally viable with strengths and weaknesses to match. The XP system for skills is use-based, meaning players need to keep using a specific type of weapon to gain TP (skill points) for that ability branch. The same goes for other activities as well, such as Exploration and Crafting – each of these trees enables acquiring new skills once one has the correct mastery level and points to unlock them. A well done and satisfying progression system.

Management heaven
This title understands the logistical issues that come with managing a base in a sandbox game, and has features to match. For instance, Crea allows players to automatically stack items from their inventory into the respective chests with one click, sort loot, rename containers, quick-transfer single items and a convenient trash bin to get rid of unwanted things. All these quality-of-life improvements merge to create a functional system that saves players a lot of time and annoyance that could derive from a more “manual” organization style. 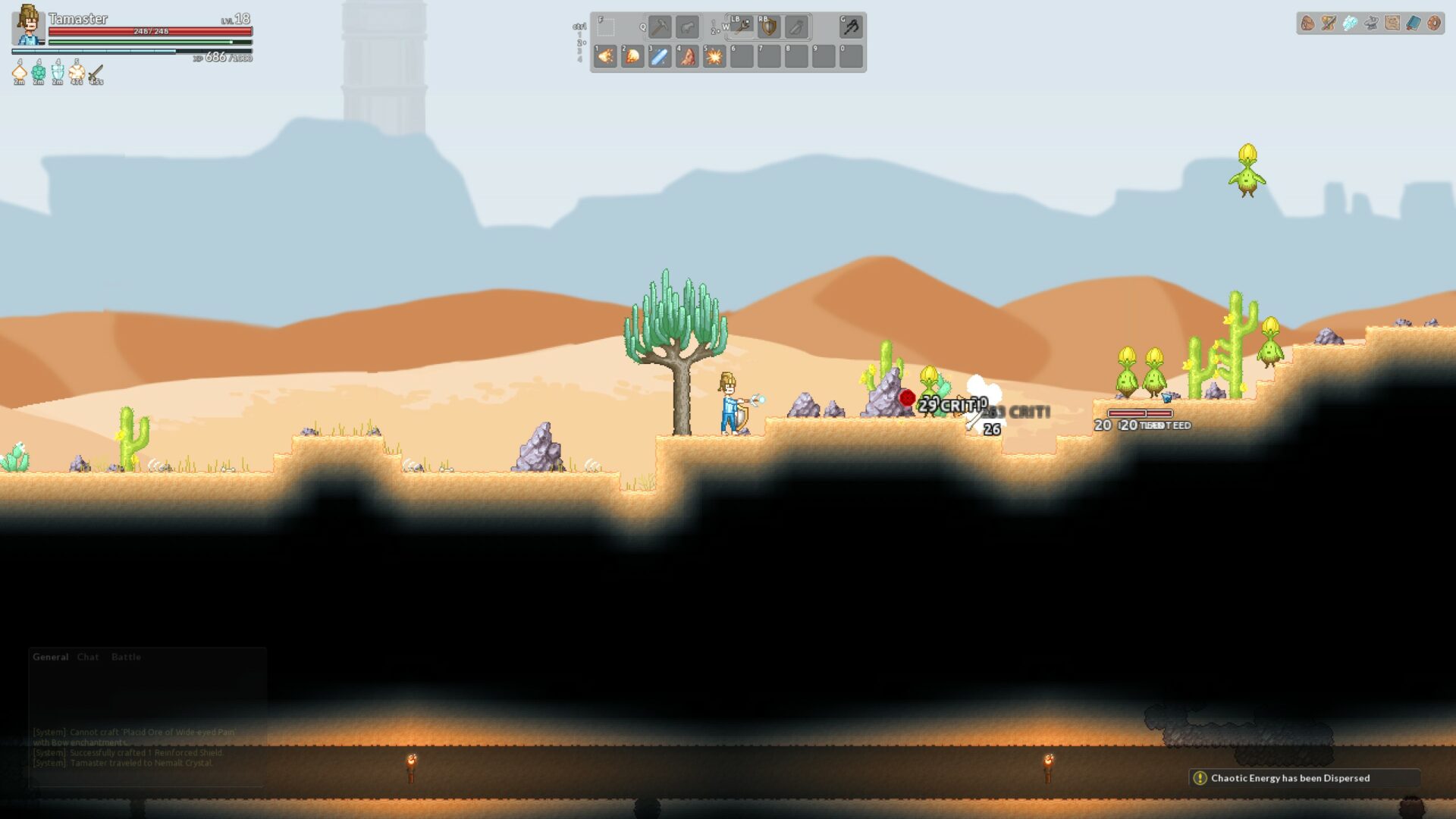 THIS was the final boss? Now what?
While the bosses of Crea are decently designed in general, and can provide a solid challenge, the same can’t be said for the final boss. With a single attack pattern, no special mechanics and unremarkable abilities, this bland fight ends the Hero’s journey with an underwhelming triumph. In addition, new materials and recipes are unlocked afterwards, that however have no real point in being researched / crafted since the final bass is already gone and, to my knowledge (and the game wiki), there doesn’t seem to be another one afterwards. 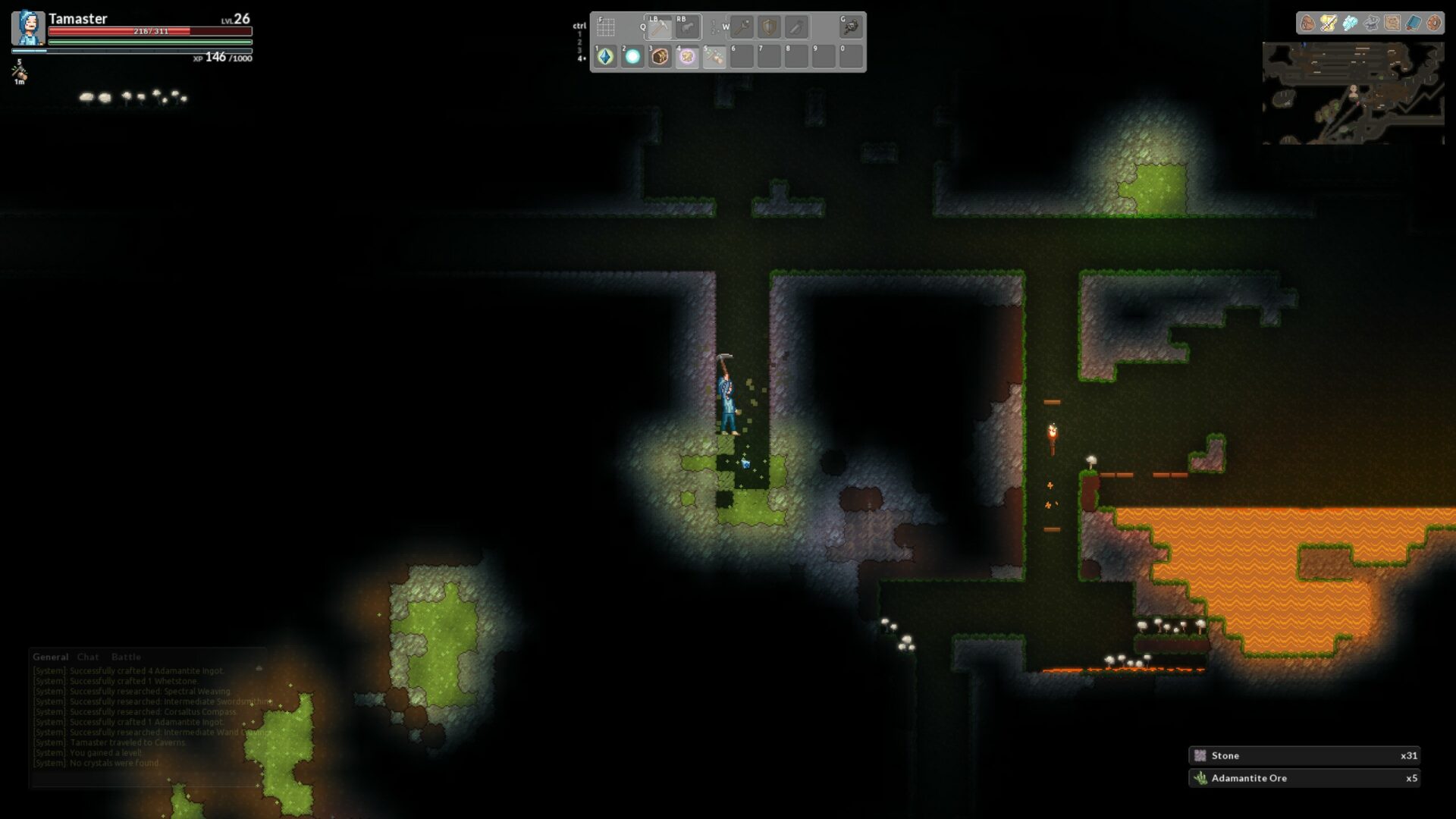 Exploration
Is performed on foot, while fast travel is available between discovered Way Crystals if one has enough Shards. These fragments also allow returning to the Attuned (favorite) Crystal when used from anywhere in the world. The lands are not overly huge, but have a lot of generated content such as treasure vaults, random events, dungeons and elite enemies. Exploring is both a necessity and a pleasure thanks to good variety and tangible sense of reward. A handy map shows explored areas, while it can be upgraded by a specific NPC to also show found chests, crystals and more useful things.

Combat
Plays out in different ways, depending on the player’s favorite approach. The main schools are Syle (magic), Arms (melee) and Ranged (bows) – but one can also choose to combine them by becoming proficient in multiple styles, which requires more time. Each combat style has pros and cons to it, while the character stats influence heavily the effectiveness of certain skills (for instance Strength improves melee damage). Withe continued use, players gain XP for the relative skill tree, enabling them to acquire superior skill levels or entirely new ones.

Combat relies on dodge-rolls, shield blocks or just well timed movements to evade or deflect enemy blows, while having up-to-date armor and equipment is fundamental to not become underpowered. The stamina bar acts both as Mana for spells and evasive actions, so managing it well is a crucial part of any fight – even if the regeneration is quite fast. Enemies can inflict a plethora of status effects such as Silence, Poison and more, but of course player spells or special weapons can do just the same.

Crafting
Branches off between Normal and Gear crafting. The former one works like any other system of similar Sandbox games, where players simply need to gather the required materials near a crafting table to instantly produce the final item. On the other hand, Gear crafting is a much more complex (and unique) system that uses Balance and Quality as main stats of a minigame composed of modifiers, skills and usable items.

The aim of such system is getting the best quality possible, before running out of Balance, and this requires both experience in the form of skills, and working out the “meta” of the system by trial and error – at first it may seem annoying and unfair but once one gets the hang of it, it becomes quite brilliant to use. Research is another form of crafting that unlocks new blueprints, if the required material for the Project are all delivered.

Character Management
Is performed via a series of classic menus, such as inventory, skill trees and equipment. Each level some Infusion points (stats) can be added to one’s attributes to progress a character build, while the same goes for the various skill trees once a certain proficiency level is acquired. Thanks to many quality of life improvements and automation, managing inventories is considerably easier and faster than one would expect. 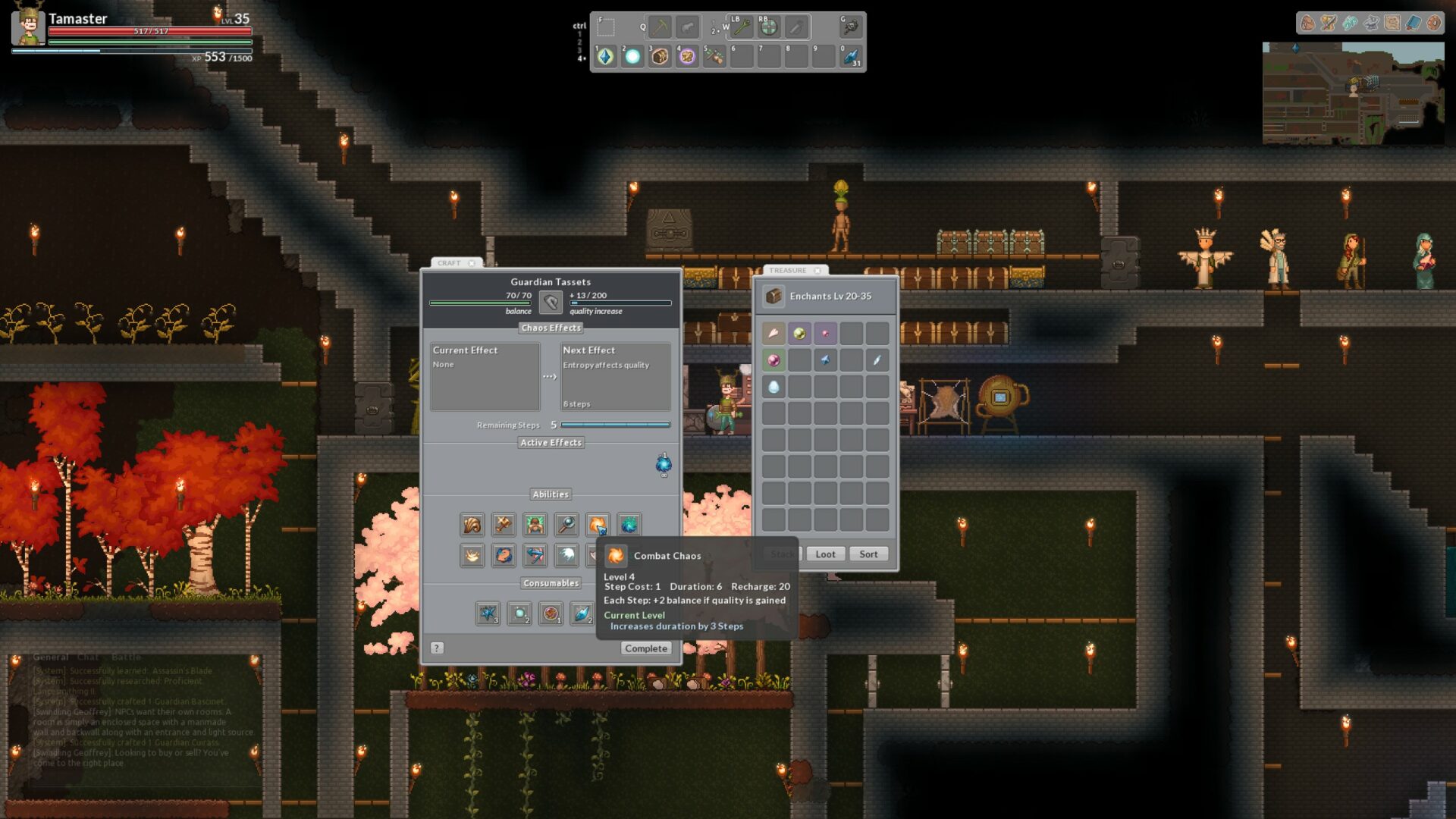 All in all, Crea is an excellent open world sandbox that nails all the gameplay elements, while introducing several unique mechanics that make it stand apart from the many other similar titles on the market. Offering a conspicuous amount of content for the relatively budget price, this is a game fans of this genre will undoubtedly enjoy.