Monster Camp on paper sounds like a compelling and unique game, a dating sim visual novel crossover that manages to include not only roguelite elements but also a compelling multiplayer experience up to 4 players.

And on execution… it’s great as well! With a lot of combinations, possibilities further enhanced by the endless possibilities and combinations of multiplayer, Monster Prom is one of the finest games I’ve played of the mutated genre I can’t even quite pinpoint what it really is. Short but fantastically replayable, extremely well written and a huge variety of events lead to a game that last as long as you want it to, especially if you gather some friends and have some laughs together should you be okay with a reading-heavy gameplay experience.

The original was basically asking a school mate out on Prom while the sequel just changes the concept but keeps the execution similarly. Instead of a Prom, you need to ask someone from Summer Camp to go watch the Meteor Shower with. In theory it’s the same, just in a different environment. I haven’t played the original Monster Prom so I only know the basic concept of it but I will definitely pick that one up as I’m curious to see how the school environment was approached just like Summer Camp was in this sequel. 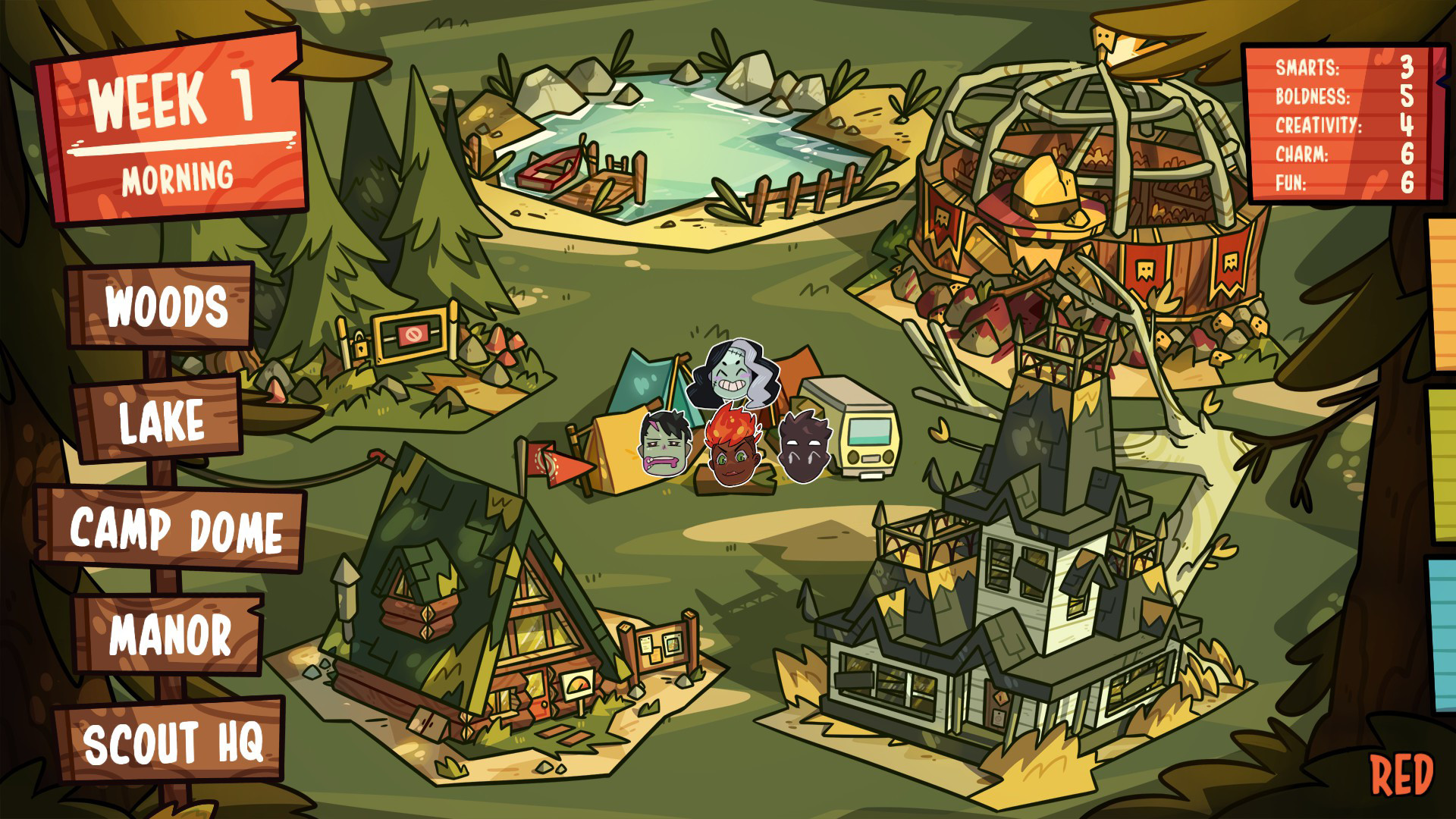 You start on the bus to summer camp and get to pick between 4 characters which don’t seem to be different between eachother – only a cosmetic choice you find fitting for you and your personality. Once your character is picked you now have to choose what you “brought” to summer camp – an array of items randomly picked from a pool is presented and you can pick 3, all amusingly over the top such as a “Book of Orgy Etiquette”, a spork or even a satanist kit. Each item gives you different stat upgrades (your stats are Fun, Boldness, Creativity, Charm and Smarts) which will shape how you’re perceived by others in the final day when you’ll ask your “crush” on the dreaded date.

Afterwards, you’re presented with a questions with multiple answers you can pick from – your answer will determine who is the person out of the possible 6 you’ll start to have a closer relationship with.

It’s worth noting that you don’t actually HAVE to go with that person the game decided to give you. Sure, your answer to the question means you showed a personality trait that interested that specific character but you can always try to win the heart of another one! The open-endedness of the gameplay and the interactions is brilliant and easily shines thanks to the fantastic writing that got me genuinely laughing out loud frequently.

Game length can be configured surprisingly – Monster Camp can be played in Single-Player (Short and Long Games are 30 and 60 minutes long, respectively) or Multiplayer (with a 4 player game being the longest – going up to 2 hours). Should you want to play a small session, you can play a solo session for half an hour or go longer games with friends and laugh at the histerical over the top writing and game events.

Over the top isn’t an understatement as the game has a fantasy theme to it – most characters are charmingly unrealistic: a robot, an edgy demon, a girl haunted by an evil spirit and so on… 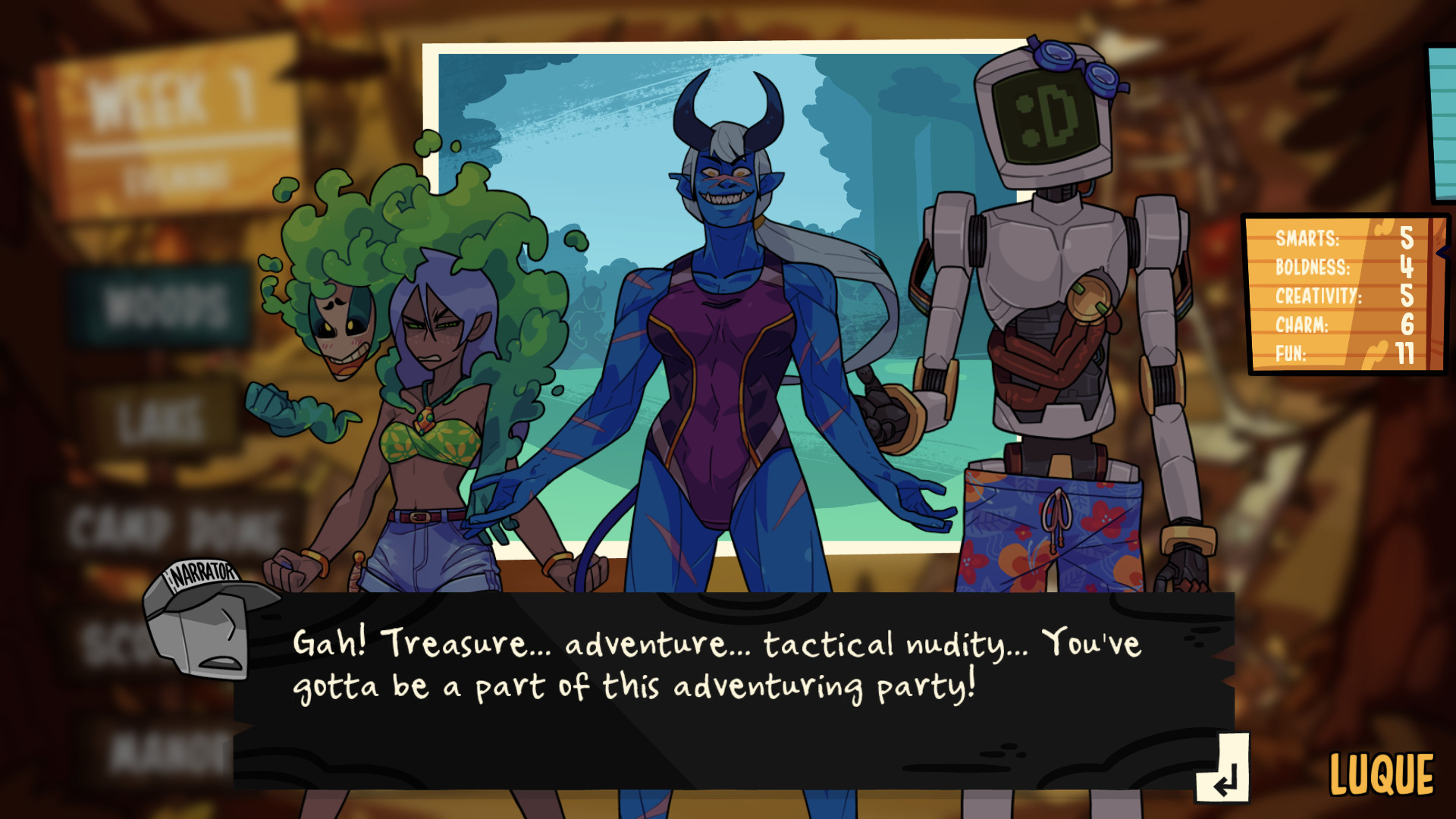 Monster Camp happens throughout a Summer Camp – the number of weeks it runs depend on the game length you choose – each week has a day, an evening and a night time event you can participate in; the first two allow you to pick which place you want to visit to trigger an event while the last is a campfire where you can sit beside a pair of characters and interact with them – never necessarily your previously assigned “first character”.

Interacting with the NPC’s will span a lot of reading as each event usually tells a small story that generates a conflict that you solve – the choice you make will influence your stats also also what others think of you – should a character appreciate your actions or words, you’ll have an easier time interacting with them in further weeks and thus, have a higher chance of succeeding at having them as your Meteor Shower date.

The concept is simple and doesn’t change as each campaign/playthrough is literally just a series of weeks – you play the little events and interact with characters and by the end you get to pick who you want to take out on a date – they can outright refuse though so be sure to have interacted with them a lot and get on their good side. Over 1000 outcomes are possible across over 300 events that ultimately have you reach one of the possible 20+ endings (not to mention secrets interactions and even secret endings) – sadly all these stats can’t be visited as the Gallery is yet to be released in a future update but the amount of different outcomes and endings as well as the ridiculous amounts of events and subsequent stories to read is astonishingly high, promoting this highly replayable game to the point its short length is something very difficult to criticize fairly.

The game at night also introduces a drinking mini-game where you can pick a drink (that you don’t know what it does) out of a random pool of drinks, the result will cause permanent changes to your character for the present stats or for future weeks and stats increases. Not all drinks are good though as you may risk having debuffs that can truly screw up the run and make you fail at the end goal of achieving a partner for the Meteor Shower. The system is quite interesting as it introduces an aspect of randomization that fits the overall style of the game but I can see why not everyone would be happy with the system as a single minor debuff can cause a catastrophic outcome in case you’re chasing a particular ending, let alone a secret one. 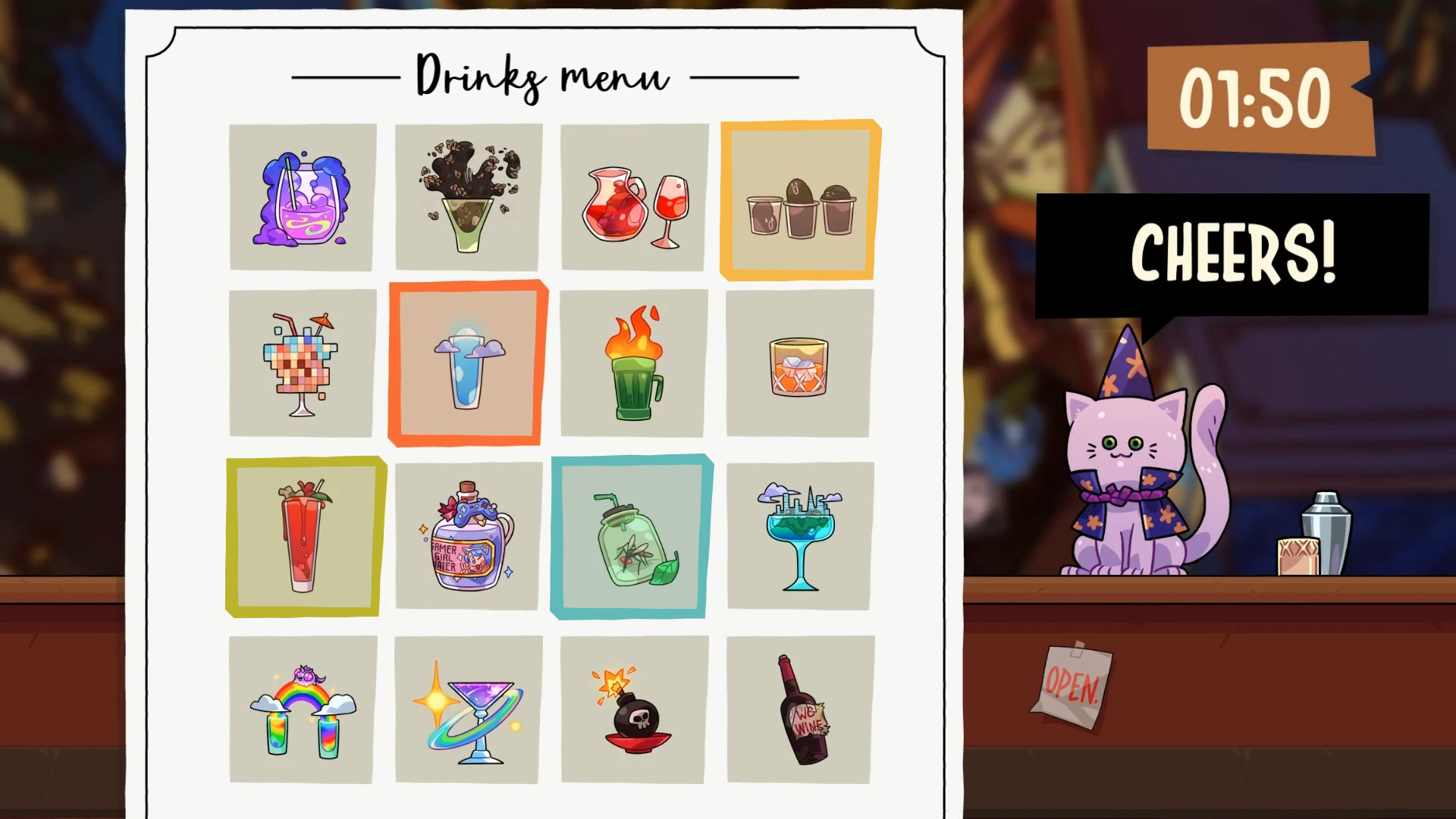 Overall, Monster Camp is a ton of fun with or without friends – you’ll read for 80% of the time, click on options a bunch of times and admire the art style the rest of the time and it’s just a great time in general, frequently hilarious and well written and very replayable, it’s just a joy to play…

A hand drawn cartoony artstyle that oozes style and charm is just the icing on the cake – Monster Camp looks fantastic with all characters having a great, characteristic style to them and having multiple stances and face drawings to convey any emotions they feel during your playthrough. It’s a 2D game and being a Visual Novel on top of that makes it hard to configure as far as graphics are concerned so performance shouldn’t be an issue for any PC in the present.

Audio is equally stellar thanks to a great pop-rock soundtrack that I absolutely adore and fits the summer camp vibe perfectly – please let me buy it. Voice acting is pretty much absent as you’ll only hear a few grunts or 2-3 word sentences characters spout to convey their emotions (much like their faces), instead of the entire script of the events. I don’t personally mind this, though but I found it worth pointing out – it’s a game that you’ll HAVE to read to enjoy and not just listen to.

Monster Camp is brilliant – doesn’t overstay its welcome thanks to a short but sweet campaign that can have its length customizable but is also endlessly replayable thanks to its great writing that you’ll rarely re-read even after dozens of playthroughs. While the gallery is sorely lacking, it’s still a minor gripe on an otherwise fantastic game that plays well, is brilliantly written and often hilarious which has its solid Visual Novel nature paired with a great art style and a kick-ass soundtrack. An easy must-buy to anyone fond of dating sims, visual novels or simply well written games that don’t take themselves seriously.