A horror side scroller about how much school sucks.

We’re well into the spooky month of the year, where people do their best to scare themselves in socially acceptable ways for thirty-one days. Normally, horror books are my go-to, as movies have found a special way to disappointment. Horror games, however, are still on my radar. The game originally came out in 2015, and I never quite got around to playing it. The Recut version here is one I went into without any real knowledge of the series, outside of seeing it around from time to time and appreciating the visuals in thumbnails on Steam.

The reviews on the game are positive, and as a lover of various genres this game explores- even outside of the medium of video games- I decided it was high time to check this thing out. 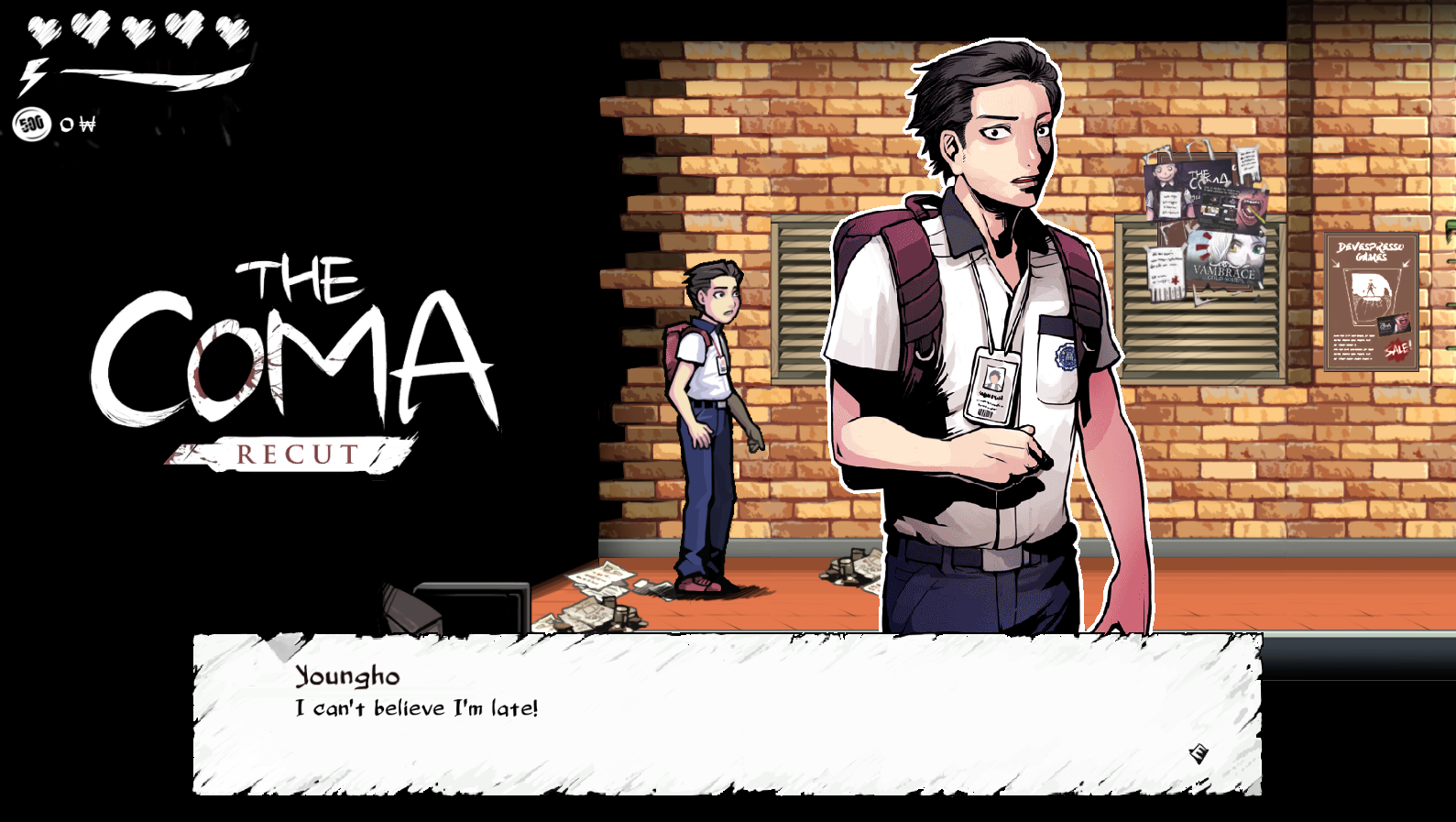 My favourite genre of horror are the mystery sort, and the psychological sort. Technically, this game falls under both categories. Things start off mundane enough, though the initial set-up is horror on its own. You play a Korean student named Youngho, and the narrative immediately paints him as supremely stressed. It goes on to expand that this sort of temperament is normal around the last day of final exams, and it seems his peers at Sehwa High School are similarly troubled. Youngho is so worried about studying that he pulls an all-nighter, desperate to secure a good grade so that he can enjoy his summer.

While studying though, Youngho dozes off. He has a nightmare, one that involves the world crumbling and that certainly couldn’t be any sort of premonition. When he wakes, his alarm previously did not go off, and he’s late to school on what feels like the most important day of his life. On the way towards the school building Youngho sees a new girl with bandaged hands and attempts to speak with her, only to write her off as ‘cold as ice’. Surely she wont be important later.
When you finally get to the school gate, there’s an ambulance present. One of your classmates – Taehoon – was so troubled that he attempted to end his life, and rather than calling the day off, the school opts to continue exams.

It’s a bleak scenario, but one that’s admittedly all-too-familiar, and horror in its own right.

Important characters include Youngho’s teacher named Ms. Song, and it seems he has a weird, uncomfortable thing for her. Seho is one of Youngho’s friends, who is also a big nerd that gets bullied along with him. Myung-gil is one of the bullies, a huge teen with slicked back hair who might have been the catalyst for what happened to Taehoon. He’s also dating the protagonist’s childhood friend, Mina, and threatens our hero to stay away from her. At the school gate, Youngho picks up a necklace. From there, he heads towards class, gets to make what I believe is an important decision, and promptly passes out. 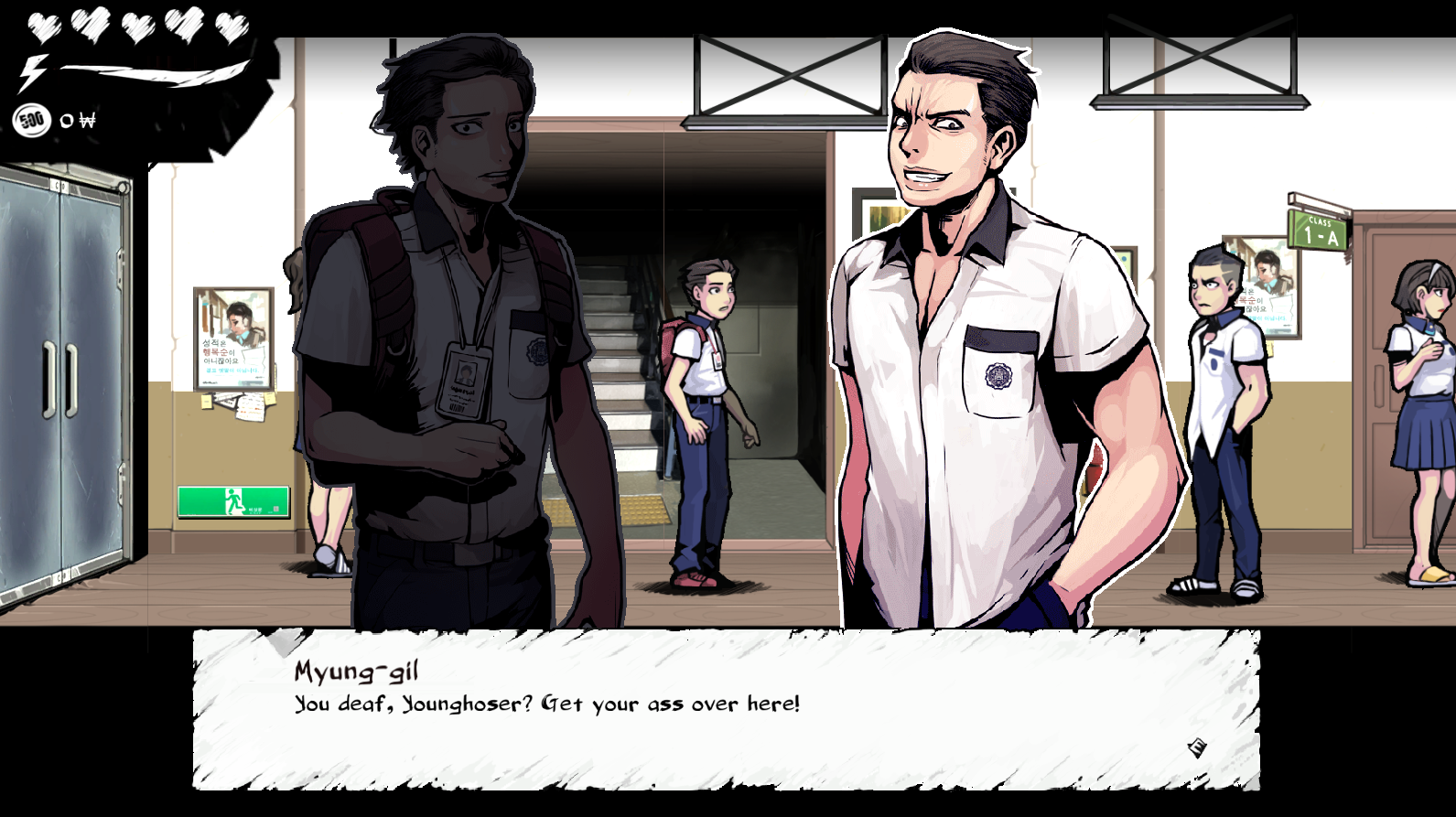 This all happens in the first fifteen minutes, at least for me. Once Youngho wakes up, the game truly starts.

When he wakes, Youngho finds himself in a dark version of his school. A monster outside of the door disguises itself as Ms. Song, and chases him throughout the school building. Desperately, Youngho races to find the truth of what is taking place and where he is, all while trying to stay alive. 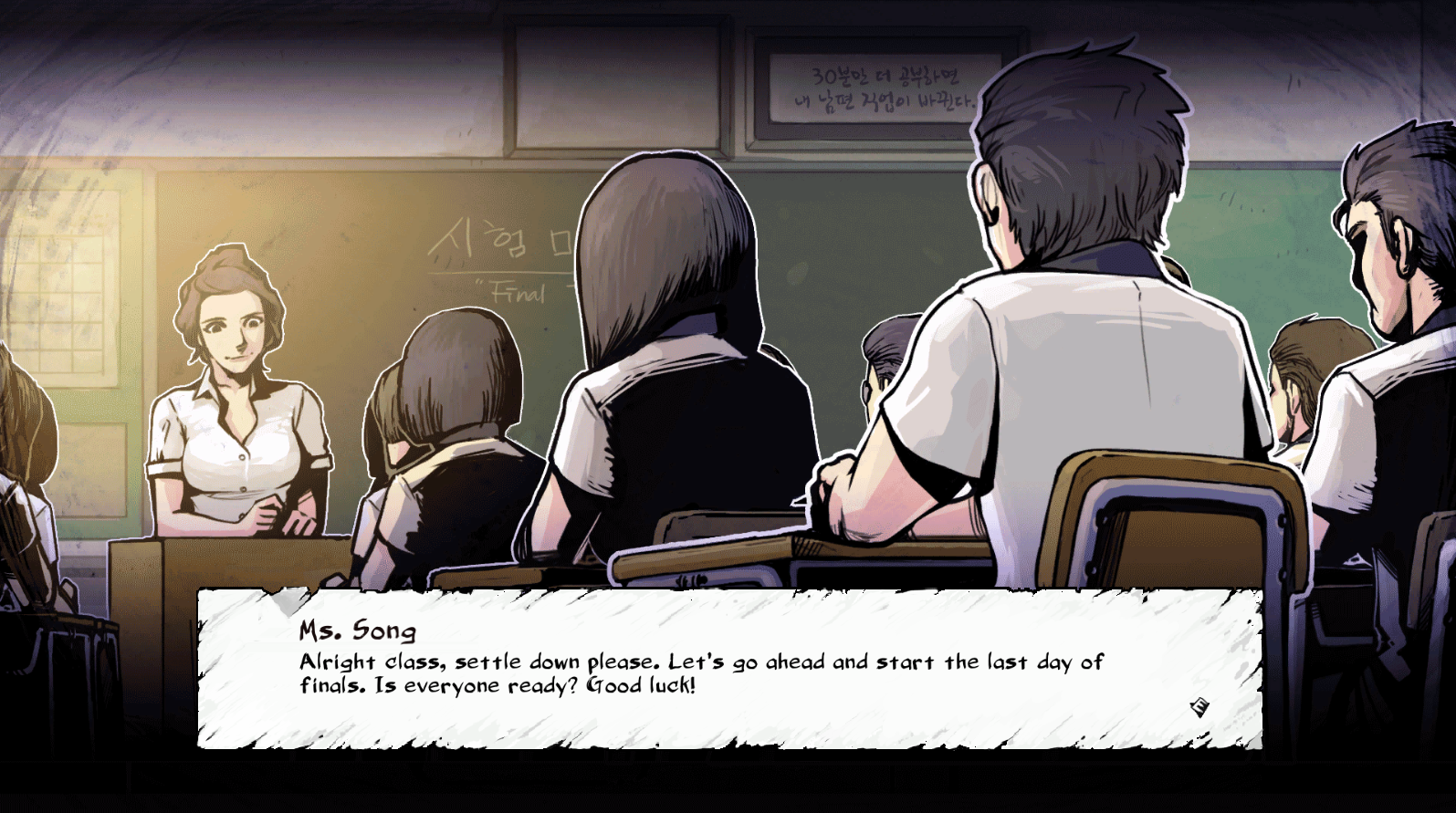 One of the most striking things about the game, and the initial thing that drew me in, are the visuals. It’s no secret at this point that I’m a sucker for high contrasting graphics, and I love harsh, dark lines. I do art as well, and comic-book style illustrations are something that always draw me in when done well. For the most part, visuals are mostly simplified in-game models, and then talking heads in certain cutscenes. They still look great, are animated well when in motion, and are always nice to look at. On occasion, cutscenes will play out on screen, and these also look great. Environments are just as contrasted as the models are, and display the dingy, grossness of the school well once you get into the spooky place. It’s a stylish game, and I loved walking into a room and simply looking at all the details the place had to offer.

Through Steam, the game lets me use a controller. This is much appreciated, as I find it smoother to use the joystick to move, holding square to run, pressing left to get an idea of what to do next, and so on. There’s a stamina meter in the game that depletes as you sprint, five health hearts that you have, and a wallet for buying items. 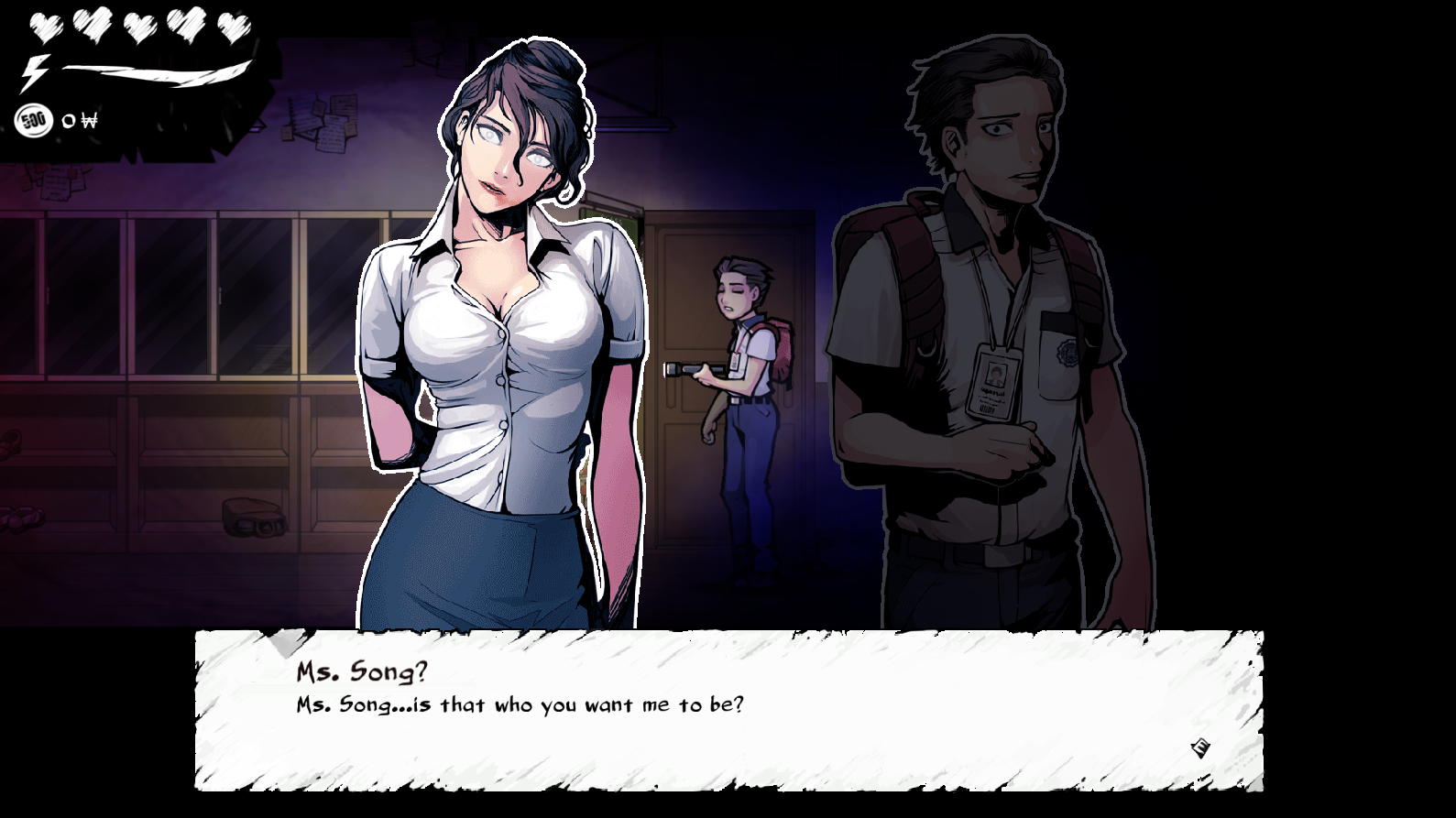 The core mechanic is to pick up notes, talk to folks, turn your light on and off, and hide from the horrible monster chasing you around. If she catches you she’s going to stab you, and you’ll want to heal yourself, which is what money is great for. Items can restore your health that you find in bags and things, but there are also vending machines available if you need to munch. There are more fun ways to lose your health as well, including bleeding (which you need bandages to fix) and poison (which you need an antidote to cure). Dodge rolling is also a key factor, and the invincibility frames in that thing are amazing. Dodge roll. A lot. Only move through the game by dodge rolling (don’t actually do this). 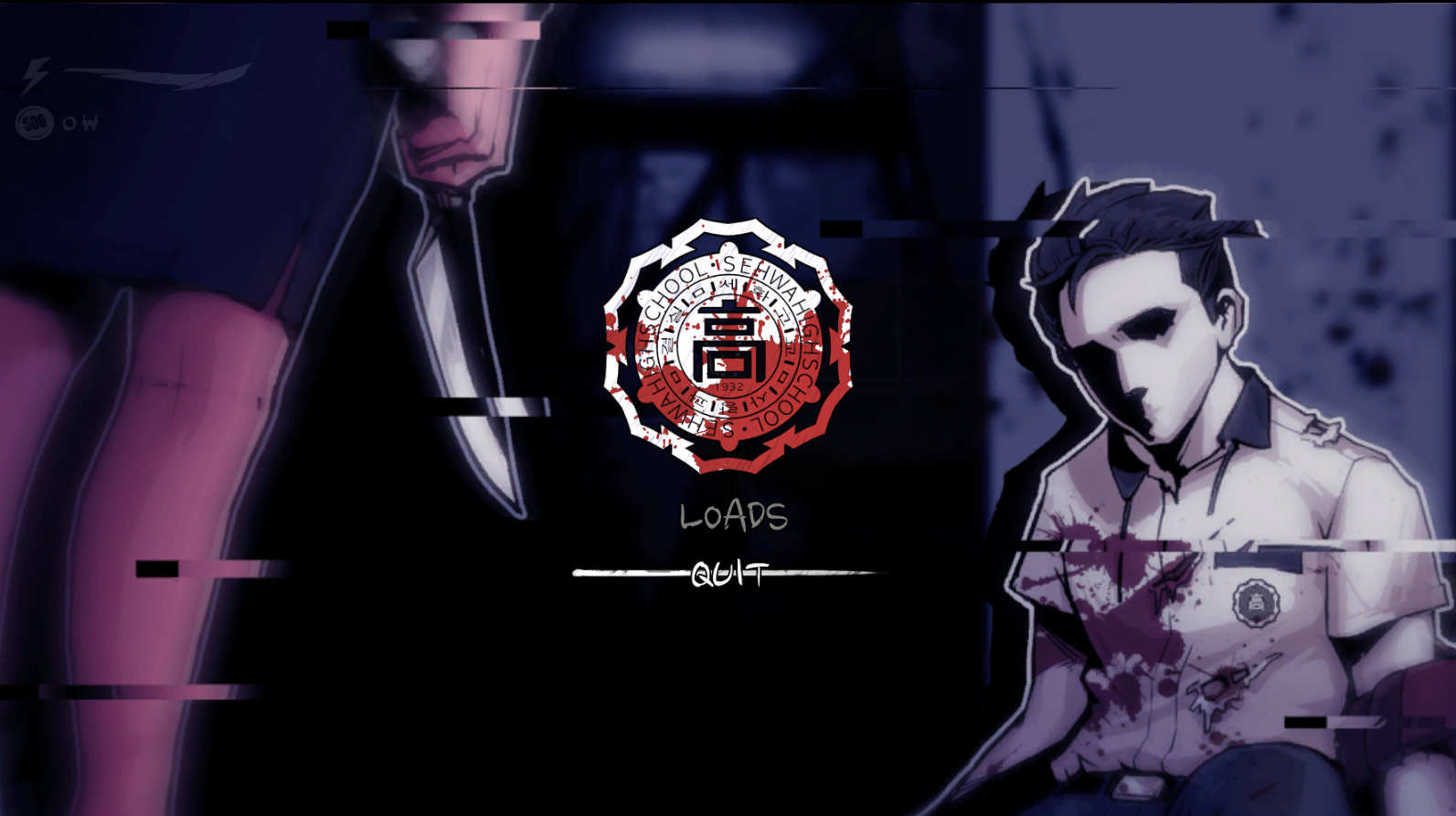 Did you know that this game has multiple endings? For me, if I find the narrative interesting, that’s an automatic re-play. It turns out there are key decisions you can make in-game that effect the ending that you get. I’m not about to spoil any of them, but this did mean I went back and loaded an old save to see if I can snag the true ending. I love mysteries, I love horror, and while parts of the gameplay got tedious- particularly a low-health loop I got stuck in with the killer- I still enjoyed my time with the game. There’s also a sequel! I’ll have to check that one out, next.