Kingdoms Reborn is a run-of-the mill city builder with potential in the multiplayer but far too early to be worth your time.

Kingdoms Reborn is a city-building game recently released into Early Access and it’s got a surprising amount of attention.

I won’t go too deeply into this review, since it’s clearly too early to do such an analysis of this game. It has some good ideas, and many of them are already implemented – but the basic systems require a lot more balance, and the innovative ones are still bare bones.

After talking about the presentation and the very basics of the game, I’ll discuss the three most important aspects to this game – the ones that will (potentially) make it stand apart from other games in the genre.

For now, I can only say that while the game is promising, it offers nothing new or particularly well done to warrant your time – yet, that is. Time and polish may change this.

Presentation is pretty good, for the time being. While the game won’t blow you away with its graphics, it looks pretty good, if not particularly unique. It obviously lacks polish – the map gets blindingly white during winter. It’s also difficult to distinguish between ground types when building, but I’m sure these issues will be resolved in time.

While the game has a pretty big map (which you slowly claim, province by province – which is a very cool idea!), it takes a big performance hit when you have a population of 100 or so. The game also seems to have some severe memory leaks which slows my whole pc after long sessions.
So yeah, the game is also “not there yet”, which is to be expect – but, at the same time, important in deciding whether you want to dedicate your time and money to the game right now. 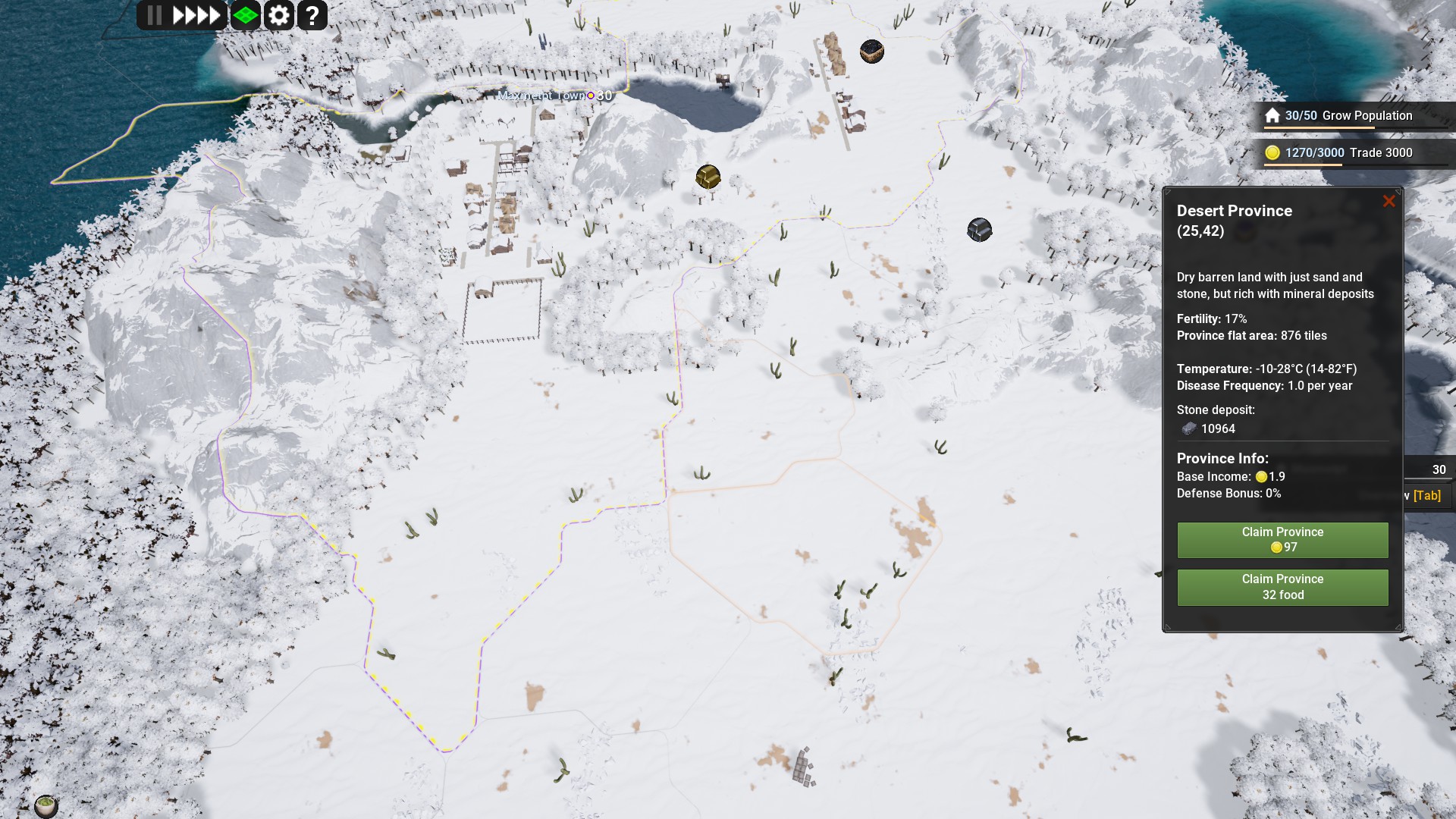 The basic gameplay in Kingdoms Reborn is what you would expect – you have primary resource extractors (farms, mines, foresters, etc.), secondary resource refiners, crafters (which take primary and secondary resources as input to produce luxuries), and services.
If you’ve played Banished, Anno, (Songs of Syx, Endzone) or anything of the like, you know what to expect.

Perhaps the best developed aspect of the game is the trading, although it is very static. I’ll go over the details later on – but I’ll say that trading becomes a central aspect of gameplay, to the detriment of other mechanics.

There are minor mechanics as well: the card system (more on which later), the combo system, the house level, research, and so on.
Houses generate income and research points. Research points are used to get new buildings or bonuses in the tech tree. Some buildings, like schools, give bonus research points to houses within its radius, but it’s otherwise very straightforward. You simply pick whichever bonus you want next, but there are no interesting choices.
House level is determined by the amount of luxury goods a certain house gets. There are several bonuses and buildings whenever you reach X houses of level Y. I guess this is your “objective” as a player – to maximize the number of houses with highest level.
The combo system is interesting, but still not completely integrated. Some buildings get adjacency bonuses, others get bonuses by the number of buildings of its type you have and so on. These aren’t very central to the gameplay yet, however.

The coolest aspect of the game, at the moment, is the province system. It’s pretty simple, but satisfying. Basically, the whole world is split into provinces, with different biomes and resources (one may have coal, another gold, gems, or be able to grow grapes or dye, etc.); you start in a tiny province and need to buy (with money, food, or influence) adjacent provinces. These are all seamlessly integrated into the map.

Finally, there’s also the inter-city interaction and multiplayer, but I’ll talk about this at the end – there isn’t much to see there yet. 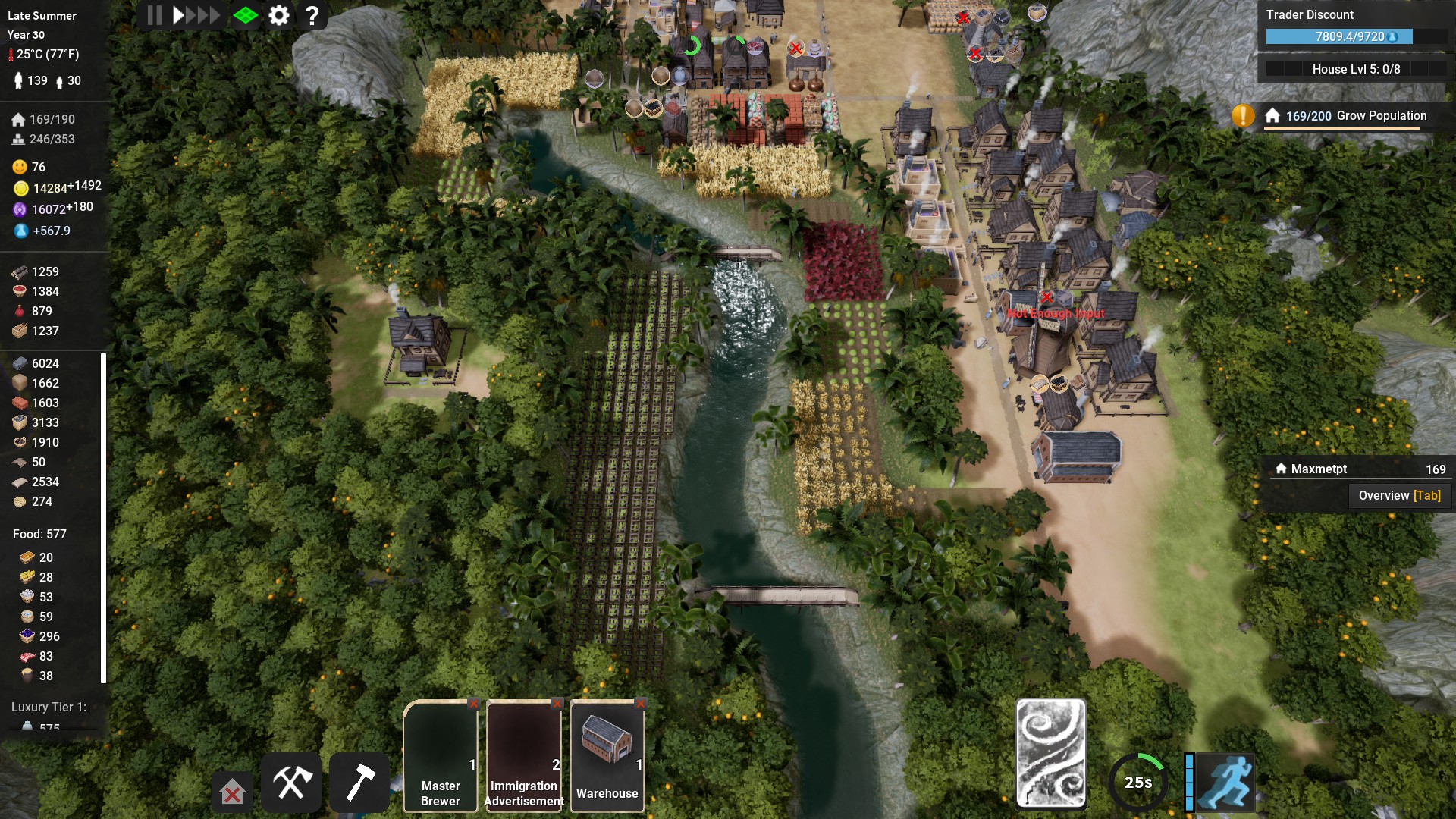 The biggest “mechanical innovation” is the card system. Instead of selecting which building you want to build from a menu, you instead have a deck of cards. You get a limited number of choices “per turn” (a season or a year, I can’t remember). You get one free reshuffle, following ones cost incrementally more.
Most cards are for specific buildings, but there are “wildcards” which let you select any specific building (or any from a category like “agriculture” or “industry”), and others are bonuses which apply to specific buildings or globally.

If you want to buy more cards per turn, you can also do this by spending some gold.

I like the idea, in theory. In practice, it doesn’t do much, really. Honestly, it’s just a hindrance.
A first reshuffling costs 10 gold. Then 20, 30, and so on. Later in the game, you gets thousands of gold from tax alone (without considering trading), so the economical aspect is bottom-line irrelevant.
The only thing the card system adds, then, is a random search for the building you want – you keep reshuffling a deck of 5 or 6 cards until it decides to roll the one you were looking for. It’s a terrible menu!

I think it would be much cooler if the card system was actually binding – you would get a limited number of choices and you would have to make due with it. Sure, it would be “unfair” in multiplayer, but it would add some local color to the game. It would be “your city”. Right now, every city plays the same as any other, so the card system is irrelevant. 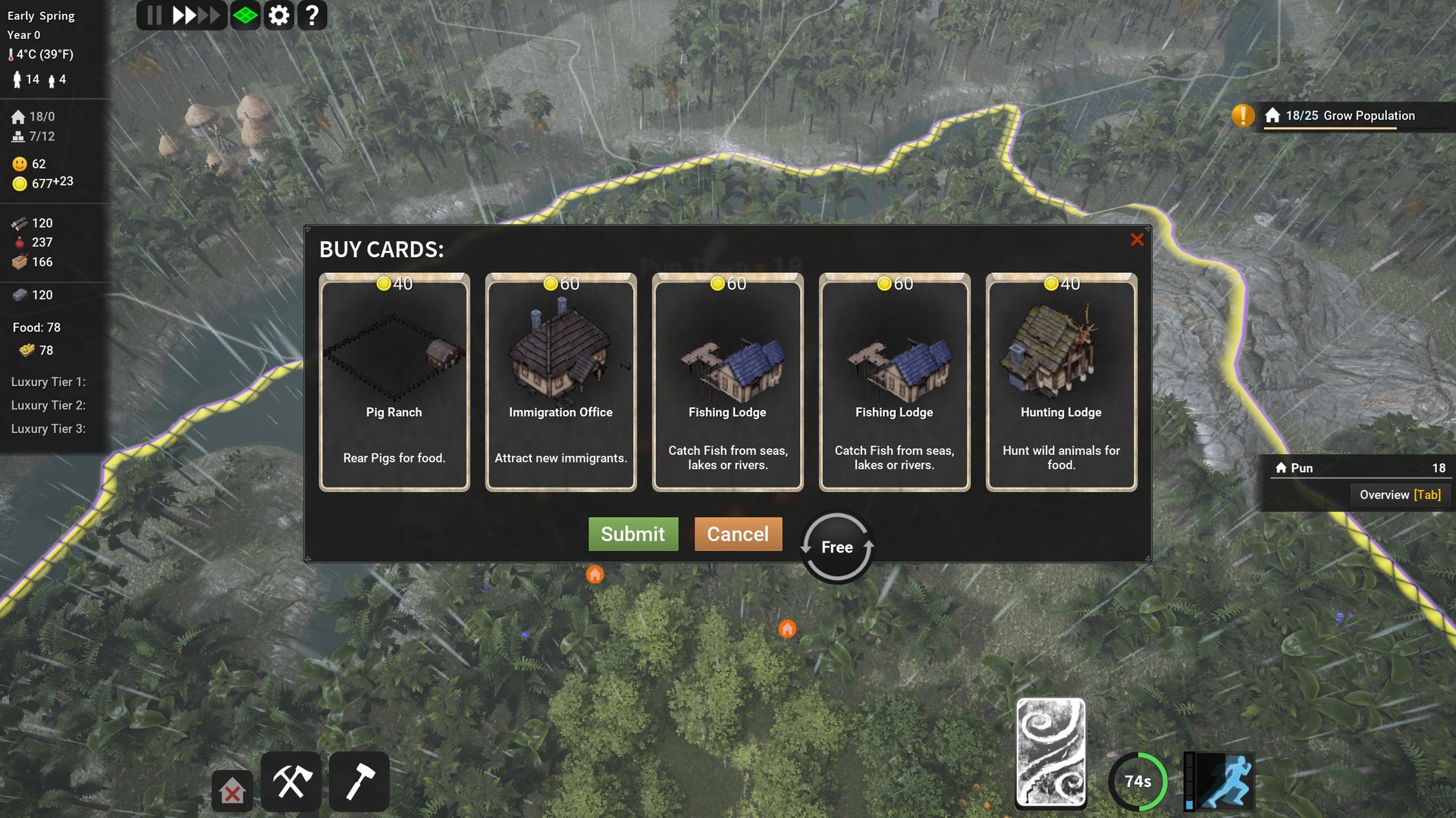 My previous review was of a game called High-Strategy: Urukon, a pure strategy game. One of my points was how “clean” the game was – how every single resource and action really mattered to the game, and how this permitted the game to be quite deep with a small number of actions and resources.

This is the opposite. This can has a huge number of buildings and little mechanics here and there, but it mostly adds bloat to the game.
Plus, since the game simulates each citizens (which are assigned to specific jobs), it can get quite confusing to read when you have dozens of different buildings for basic or refined resources and so on (though this is also something that is likely to improve when the interface gets more polish).

And then, there’s the trading system. I ignore this for a while, until my food supply started to run short despite the huge number of farms. Then I actually started trading: and almost everything else became irrelevant.

The trading system is well implemented, if a bit confusing. You must set which resources you have to import and export in your town hall, and then you must build a trading building for each specific resource (with a limited amount). Once you do this, however, it all happens automatically.
And at this point you can just import food (the cheapest) and primary resources, and then sell luxury ones produced from them at a much higher price. And you’re set.

You can argue that “real cities” (or countries) are like this as well. And sure, to an extent I agree, but trading can become viable very early, and so the whole resource gathering aspect of the game becomes obsolete. This is rather unsatisfying, honestly – and this is before getting into any multiplayer meta in which even more mechanics are likely to be completely ignored in the meta arms race.
The system is unsatisfying, to me.

Trading also seems unaffected by the dynamics of diplomacy or what each city actually needs. This dynamic would be very interesting – but it would become quite complex, about which I will speak next. 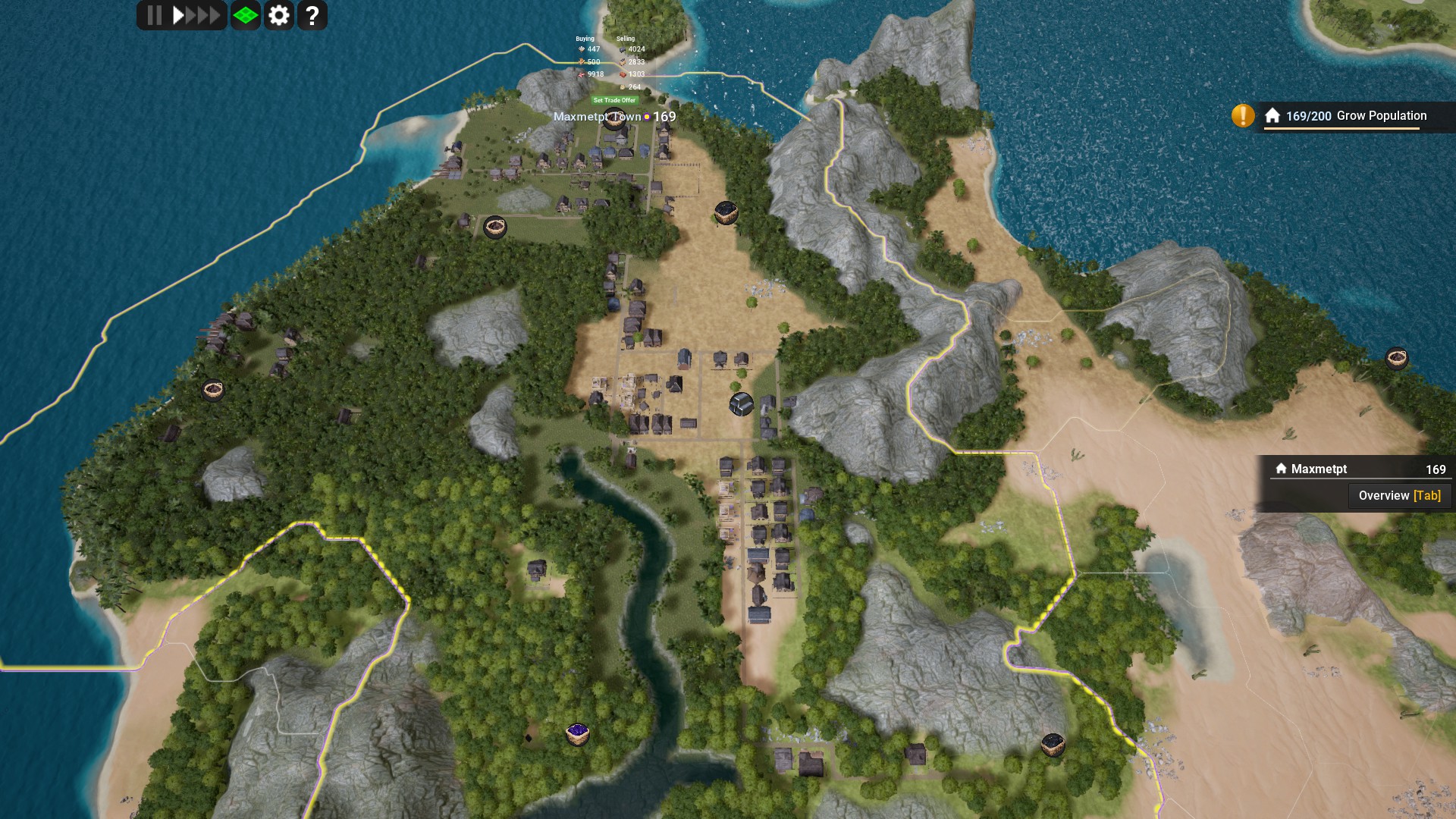 Several cities inhabit the same world map, so there will be war. In the future.
There isn’t much there yet, however. All you can do is “conquer” cities with a press of a button, which uses “influence” points. The system is simply not implemented, yet.
This could be it for this section, but let’s think a bit further.

I don’t believe that the multiplayer will work very well – because of the micromanagement aspect of the game. The diplomacy and warfare can’t be very deep when you already have to keep an eye on individual jobs and supply chains.

Let’s take up my previous point – trading dynamics. If there were supply and demand, between cities, the trading could be very interesting. Perhaps also trade embargos. Then you would need to pay attention to meso-level relations between cities and which resources can be best harvested in their provinces to decide how to set your own trade up. But this adds a big cognitive load, and one that is completely separate from the micro-level job assignment and building placement.
Gaining control of specific provinces could also be much more important than whether you 13th storehouse is close enough to the beeswax producer.

War would add a whole other component with army management and maybe even having to fortify buildings.

No need to get into that just yet, however. My point is that it seems a daunting task, and the one that is the farthest from being implemented in the game. 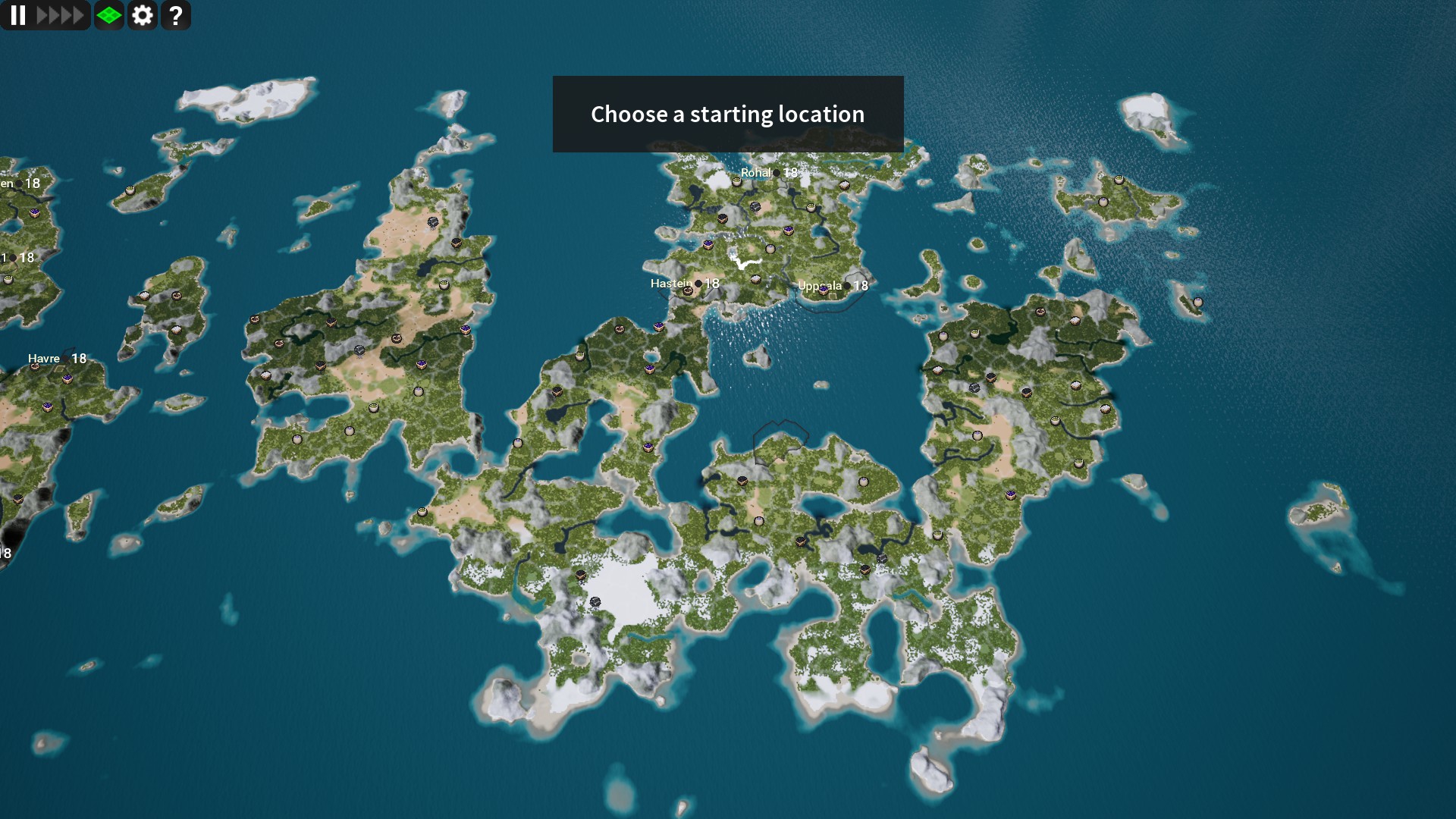 I don’t want to sound too negative, since the game is very very early. However, its most daunting task (and most original) is the farthest from being implemented.

Right now, the game has many resources, many buildings, many systems, but it’s not at all clear that they work together well yet – let alone when the complexities of diplomacy and war are added.
So far, it seems that design was on the basis of “addition” – add this mechanic, add this resource, add this, add that, and pray all will be balanced at some point in the future. My guess is that refinement will have to bet on subtraction, or the game will crumble under its own weight.

So, should you get the game?
I think it’s far too early. The game is functional, though it has big balance and performance problems; beyond that, it doesn’t do anything new, yet.
You *can* get the game and play it. Maybe it will be worth it for the biggest fans of city-building games, curious about where the genre may be going, but I doubt it’ll be a satisfying experience for a while.

It’s an ambitious effort, and worth keeping an eye on over the next few years, but I would advise waiting, for the time being.