Space combat the way it used to be made

Space combat sims are not exactly a type of game we see a lot of these days. There’s been a small handful but most of the space sims that’s been getting a lot of attention in the last 10+ years have been focused on exploration, trading or other such things, they’ve not just had you play a space fighter pilot.

Absolute Territory is one of those rare exceptions, a space combat sim that just focuses on the combat, where you play as a fighter pilot, going up against other fighter pilots and trying to wrestle control of space from them.

Let’s just get this out of the way first, story is not Absolute Territory’s strong point. The sector known as Bold Peace is being invaded by the Endophora from The Order of Linnaeus. Those sure are some words and names. Endophora is a linguistic term and Linnaeus was a famous botanist and zoologist who created the Linnaean taxonomy. For some reason the enemy ships continue the weird naming convention as they have names like Vomitoria (the Latin name of a type of holly) and Drosophila (a genus of flies).

These weirdly named enemies are trying to invade Imperial space, and you need to stop them. You’re not alone at least, there are other pilots who are fighting alongside you, although none of them are given any backstory or personality. There’s in fact not much information at all given about the world, the enemy or your side. Two more or less anonymous forces are fighting each other, hoping to defeat the other. What will happen if the Endophora win? No idea.

Every mission has a text briefing with a few snippets of information, but there really is not a whole lot of lore given here. You know what your immediate objective is and why, but they don’t give much insight into the larger universe. 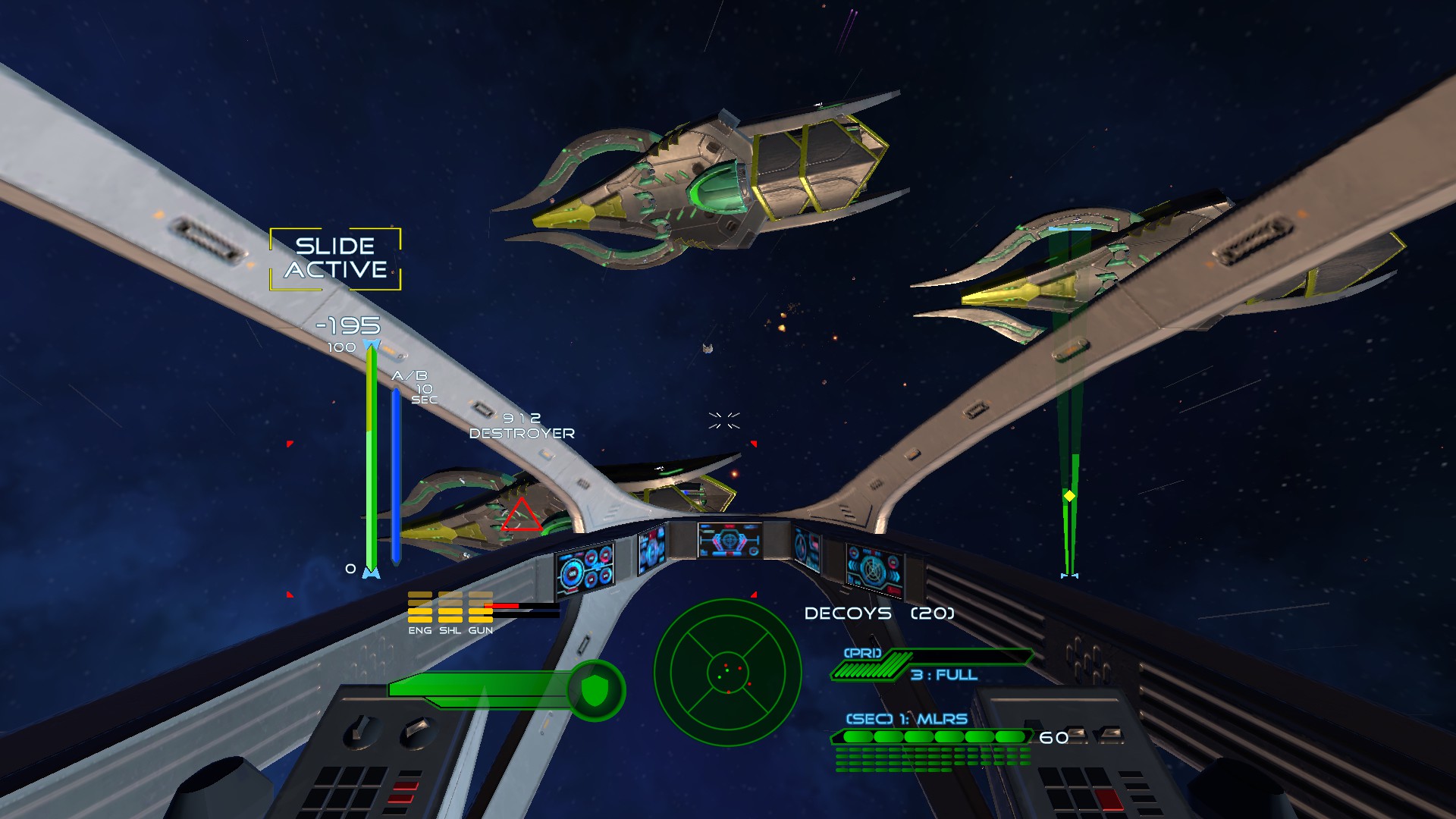 Absolute Territory is clearly not a game made with a huge budget, but spaceships in games tend to still look alright, even when the graphics look a bit dated. And that’s the case in Absolute Territory, the spaceship models don’t look very complex and the textures are simple, but they still look fine. There’s also some good ship designs here and the two sides have distinct looks and colour schemes for their ships which makes it easy to tell friend and foe apart, even without your targeting computer.

What looks a bit worse is the cockpits of the ships you’re using. Every ship type, and there are a few, has its own unique cockpit and many of these have a unique look and feel to them, but they are just static models. Most of them have instruments and screens visible, but these are just there for show and the information shown on them never changes. Instead you’ll get all the relevant information about your ship, like shield strength, weapon energy and so on, from the games UI which is plastered on screen. The UI you see during the game looks alright though and it’s easy to read, but the games menus and the pre and post mission briefings look quite bad.

It’s said that sound is not transmitted in space (which is not entirely true) but despite this Absolute Territory is a rather loud game. Sounds play both when you get hit and when you hit the enemy, giving you feedback on what ‘s going on. You’ll know that you hit something just from the sound alone and different weapons don’t make the exact same sound. The game also uses music to indicate when you’re in combat and when it’s safe. The cut between the songs can be a bit sharp, but the songs are distinct and still pleasant enough to work as background music. 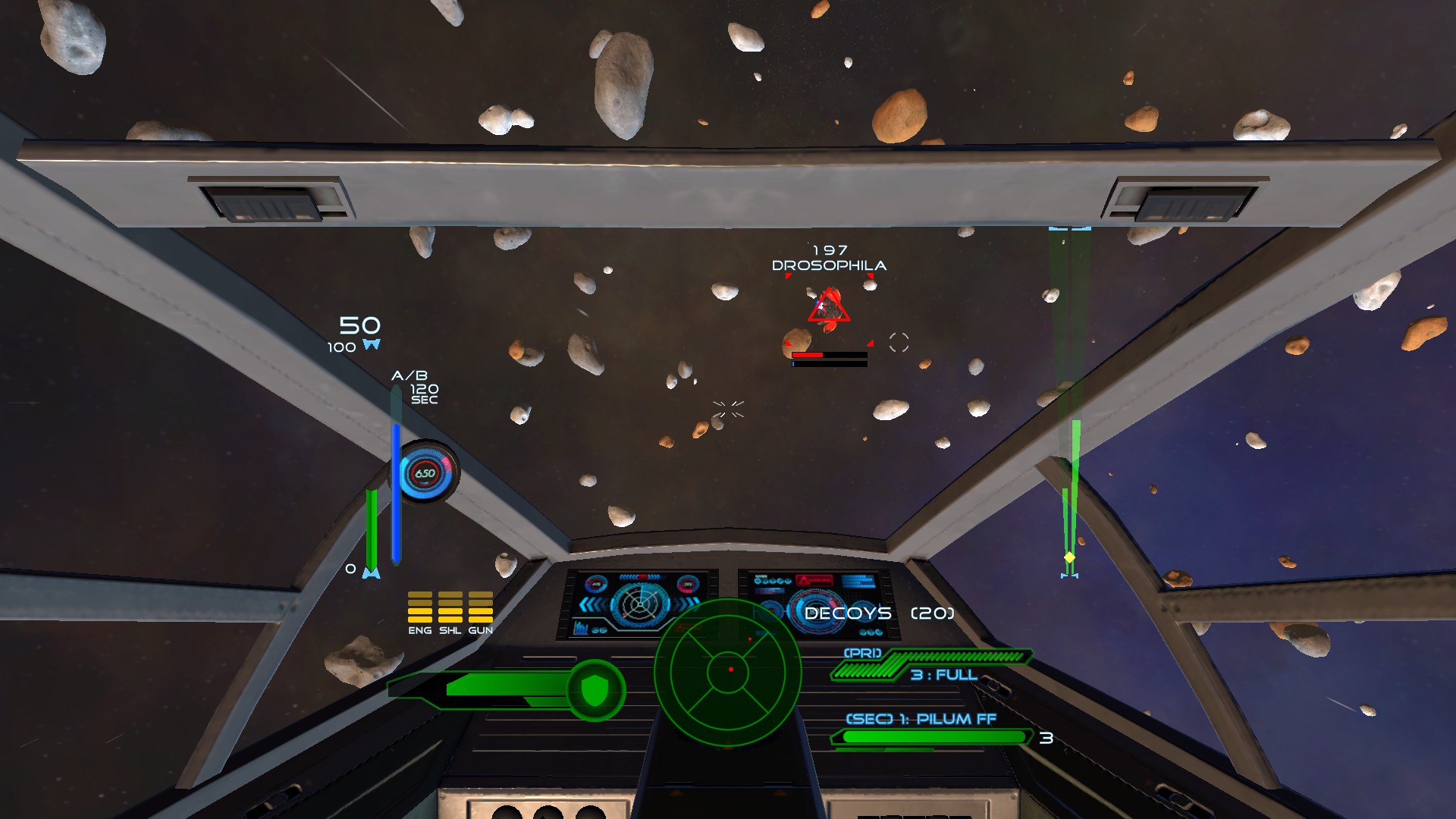 Ever played Wing Commander, one of the X-wing or Tie-fighter games? Then the basics of Absolute Territory will seem familiar to you. You’re a space fighter pilot and through the campaign you’ll be piloting a bunch of different ships. These ships range from agile but frail fighter ships to more heavily armed and armoured ships capable of taking in capital ships.

This is the kind of game that’s best played with a joystick, but it’s not so complex that you’ll need an expensive HOTAS and it’s still perfectly playable with a mouse & keyboard. You’ve got full 3D movement and the game has a somewhat simplified Newtonian physics model, so you need to deal with things like inertia but it’s not a completely realistic simulation model. The simplified physics model makes it an easier game to pick up and play than it would have been if it was aiming for a perfect simulation and gives the game an arcadey feel.

Your ships vary in speed, mass and armament, but the controls remain the same no matter what ship you’re using. You’ve got forward facing energy weapons that you can either chose to fire individually or all at the same time, missiles that requires a lock-on, shields that regenerate after a while and hull integrity which does not. You can chose how to distribute power between your weapons, shields and engine and by default there’s a balanced energy distribution that works fine in most situations. One area that is interesting is how your missile work. Depending on the type you’re using they might be dumbfire (not homing), they might lock on to the enemy’s engine heat or their target signature, and the two later types will vary in how well they work depending on the enemy’s facing, the target signature ones work best when fired at enemies facing you, and the ones locking on to their engines work best when the enemies are facing away from you. 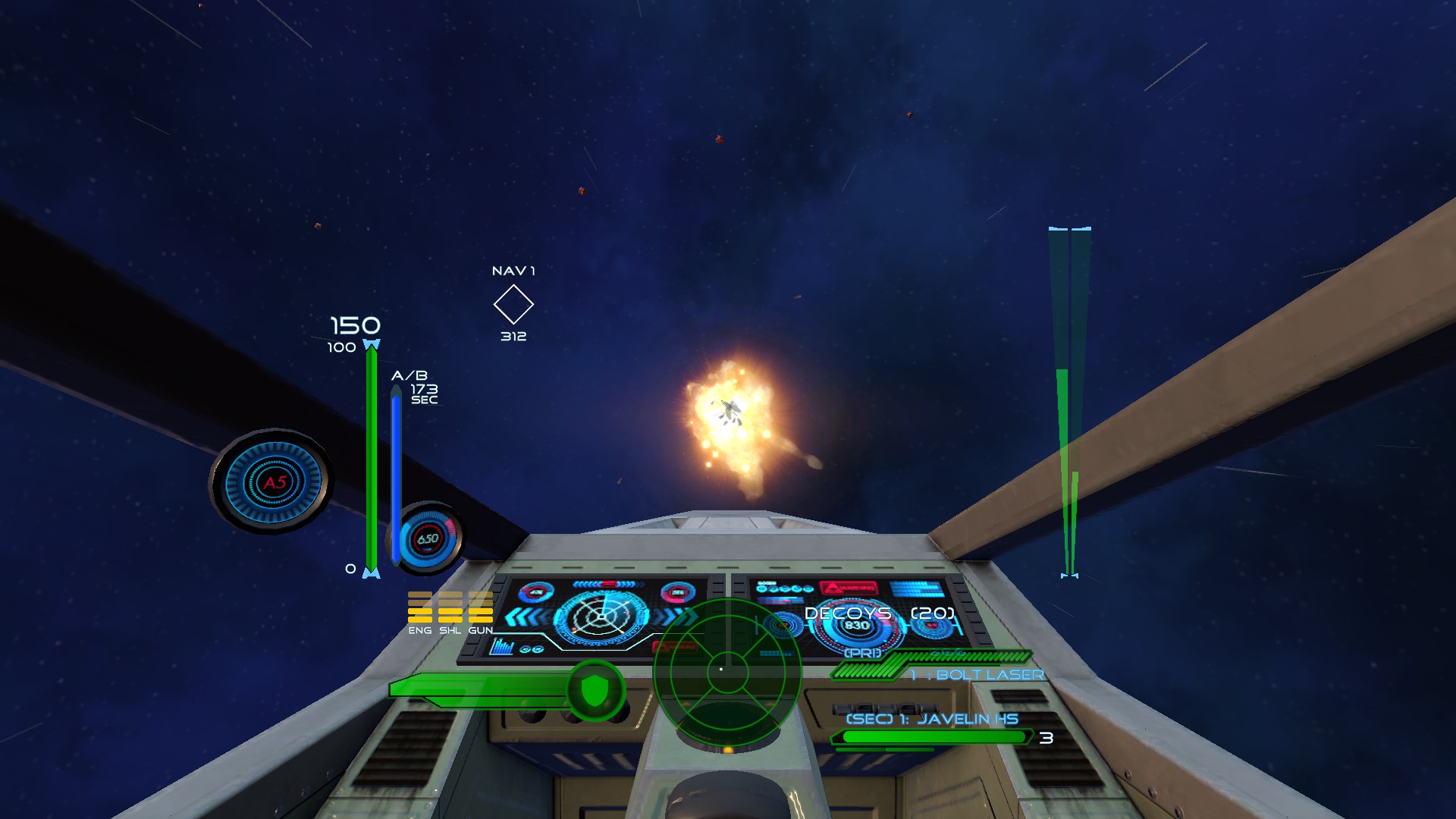 Enemy fighters follow the same rules as your ship, they have shields that regenerates, missiles that need to lock on and so on, and need to deal with the same physics as you. It’s possible that they don’t need to worry about energy allocation and weapons energy running out, that’s hard to tell as a player, but the game feels fair at least, and allows you to do the same things they do. But the enemy does not just have small fighters, they have larger ships as well. These large ships work differently as they lack shields and have multiple turrets scattered all over the ship. The turrets can be destroyed individually so it’s entirely possible to make an enemy ship completely harmless, though it would probably easier to destroy the ship itself than destroy every single turret. The fact that you can strategically destroy a larger ships weapons make them feel very different from their smaller counterparts, and make them more than just big damage sponges.

The game has a 21 mission long main campaign with each mission being relatively short. The early missions are in fact very short, but they ramp up significantly in length and complexity later on, although each individual mission will still not be so lengthy that they feel like a big undertaking. The early missions are maybe a bit too simple though and the game ends up feeling shallow and simplistic during the first few missions, but the game gets better the further into it you get, and the most interesting, and fun, missions are near the end of the game.

Level editors are a good way to prolong the lifespan of a game, and Absolute Territory comes with one, and it has steam workshop integration. If this level editor will see any real use will largely depend on if the game is able to attract enough players, but there’s already a few levels on the workshop. 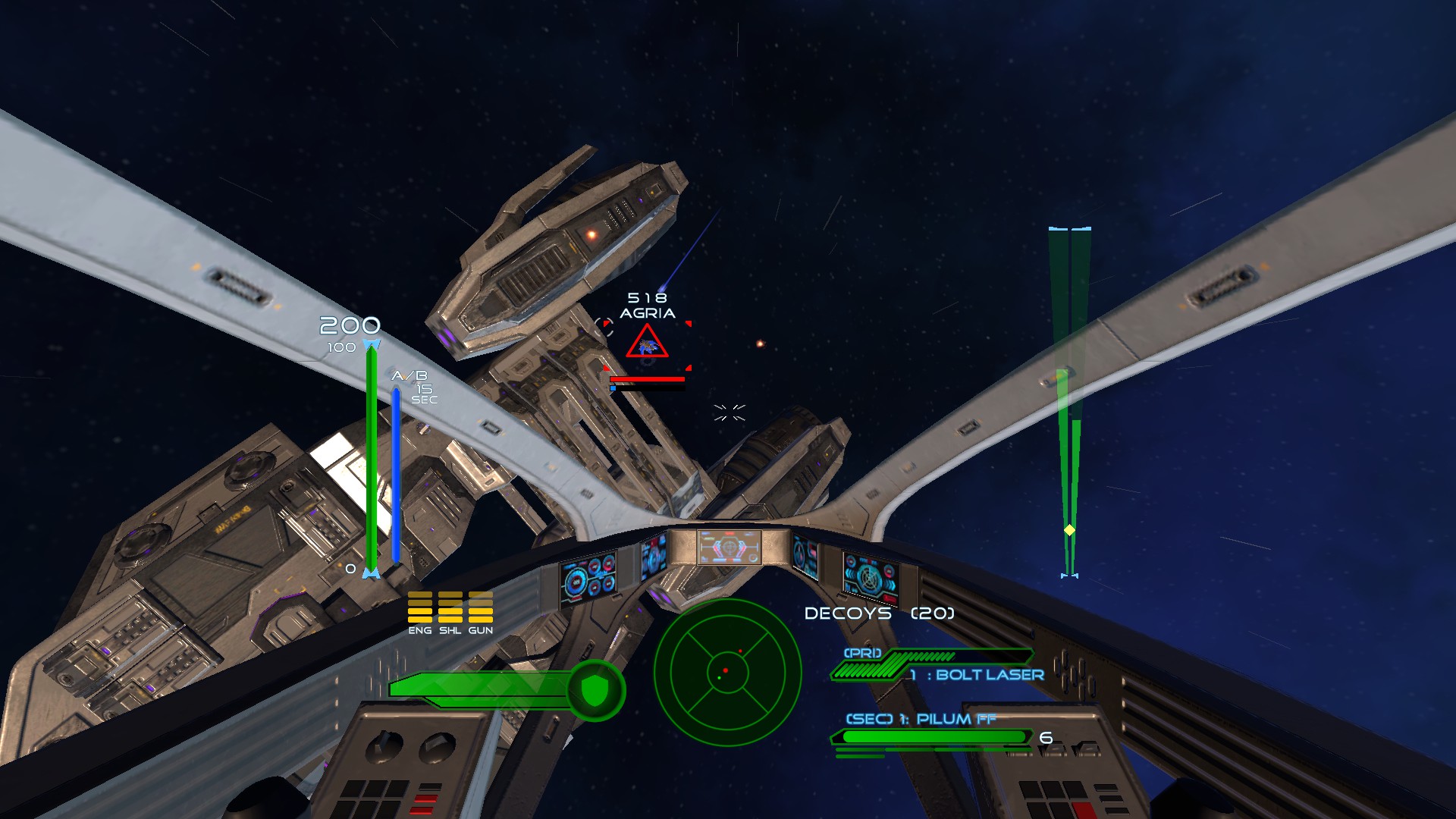 Absolute Territory is a pretty good space combat sim that fails to break new ground. Its biggest flaw is really a general lack of personality, the story fails to impress and I never felt like the game gave me enough information about the world or its characters for me to feel invested in it. This is in other words no Wing Commander. But the gameplay is solid, flying a spaceship and shooting down other spaceships never got boring, and while this won’t impress those who are looking for a complex simulator, those who are looking for a more arcadey experience that still gives you the feeling of flying a complex machine (think X-wing Alliance, Wing Commander, Tachyon or even H.A.W.X.) will probably find Absolute Territory to be a worthy playthrough, even if it can’t quite live up to the standards set by the games that inspired it.