10 Miles to Safety (10MTS) is a single-player and co-op top-down shooter set during a zombie outbreak. After an experiment went very wrong, a virus spread and infected a large number of people, which started to mutate into bloodthirsty monsters. Players impersonate one of the countless survivors, finding themselves in the middle of a fight for survival. Starting with nothing, alone or with up to 3 others, the survivors will have to kill, loot and craft their way across the 10 Miles separating them from the evacuation zone.

A plausible apocalypse
The way 10MTS depicts a city ravaged by a zombie outbreak is quite well done and plausible. Other than players, many other NPC survivors are often seen running around for their lives – or fighting the infected sometimes. Burning or crashed vehicles, destroyed shops, corpses strewn in the middle of roads… as it should be. At some point the efforts of the military and police forces are also shown in detail – though not all of them will be allies. The worldbuilding is well thought out as each zone has a mostly realistic layout that is in line with expectations.

Living on the edge
The game is designed to always pressure players into finding better gear, replenish resources and be stocked on ammunition / consumables in preparation for the night. A permanent timer forces survivors to use their time efficiently, looting as much as possible while avoiding the infected and other threats. As miles to the target decrease, infected power grows and new enemies also start to appear: players need to strike a balance between looting, crafting, progression and resource management. This gameplay formula works really well and delivers a fun experience.

Many dangers ahead
10MTS delivers a solid variety of events, enemy types and threats to face during the journey. Common zombies soon become bolstered by special infected types, while also military death squads and even armored vehicles come into play. The main story uses unique events as milestones in order to progress, while the world has as well many other such challenges spawning randomly – each with its own rules and rewards. The nights become ever more dangerous with Hunter quantity and strength increasing each time. 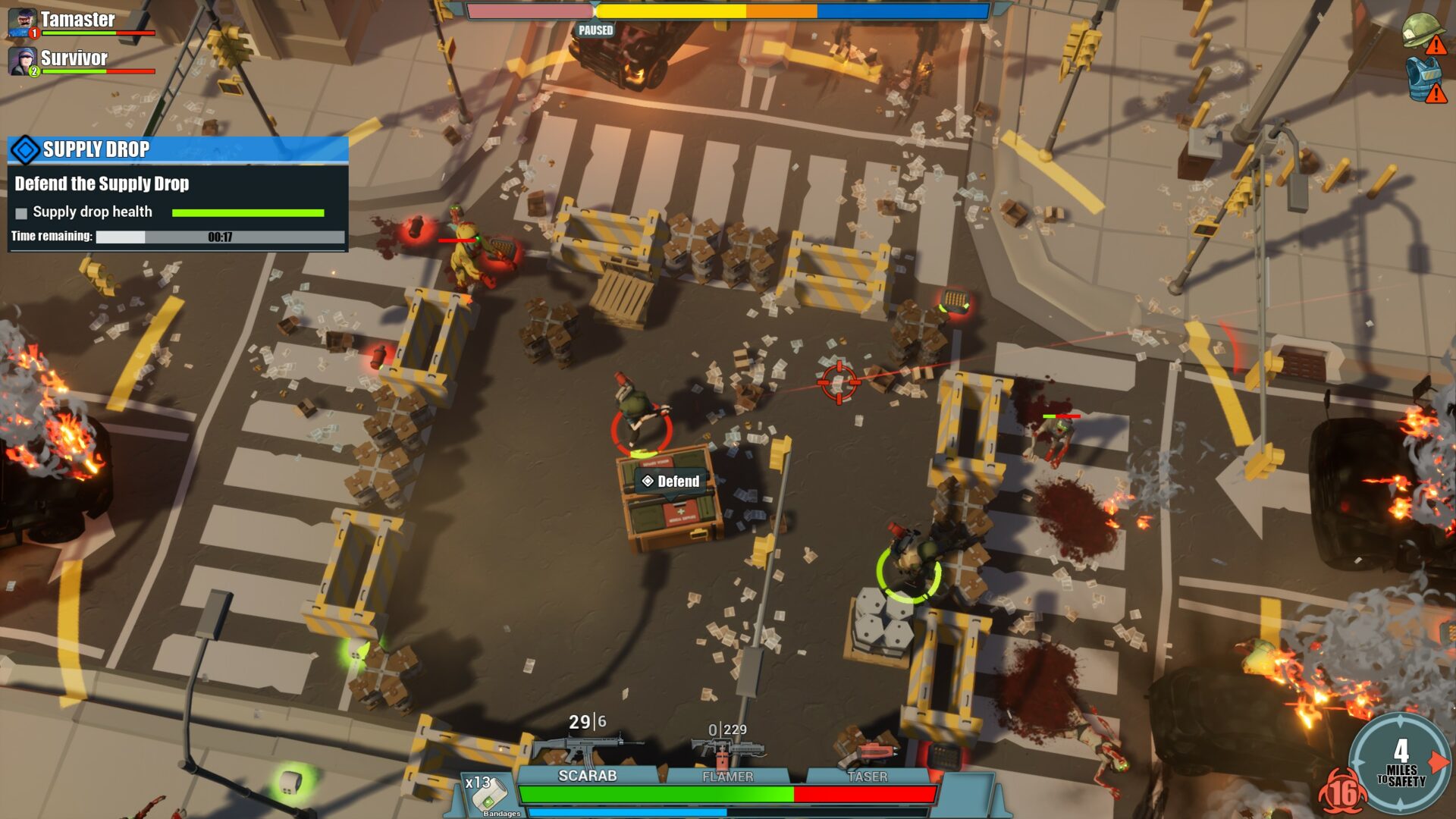 Not all guns are made equal
Weapon balance needs some serious tuning. Among the available murder tools, melee results useless across the board since it won’t 1-shot even common zombies most of the time, often results in taking damage. Ranged weapons have a few shining stars among them that are ultimately more useful and powerful than any other – while other weapon classes are simply underperforming, not worth using in comparison. This leads to lesser variety of combat options.

This Ph.D. isn’t worth it!
The various available classes each have unique skills such as improved crafting, better healing and more. In practical terms however, none of these bonuses is impactful or distinct enough at any time to really differentiate one class from another. These specialization do not feel really unique or standing apart from one another: the passive bonuses are “just” okay but fail to deliver a deeper specialist gameplay one would expect from a class-based system. 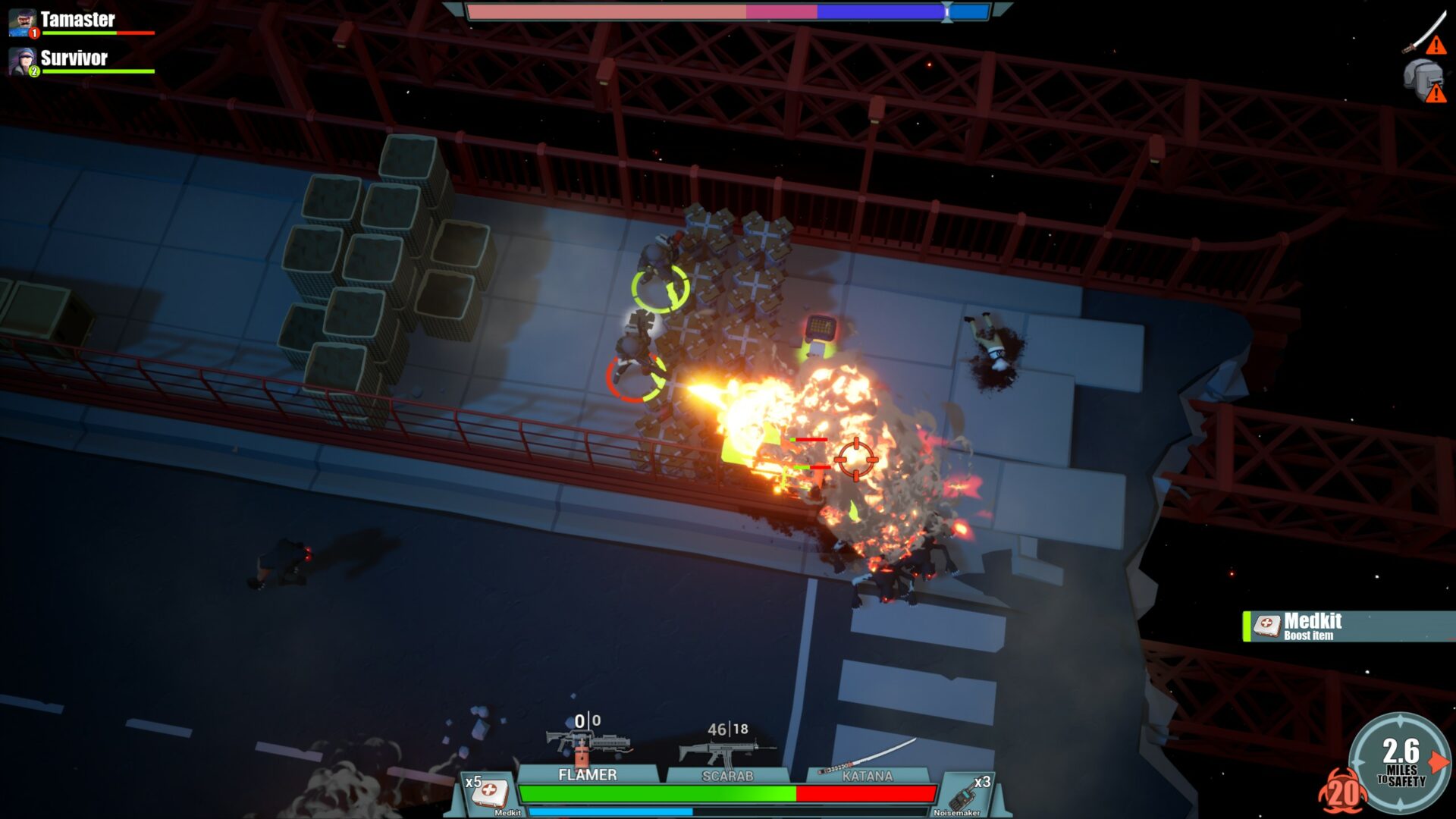 Exploration
Is performed on foot throughout a procedurally generated world divided into layers, each with a different theme such as cities, military camps, forests and more. While exploring, gathering resources and gear is fundamental to keep up with the infected evolution: to do so, containers divided by type (Green, Blue, Orange, Purple) are scattered around, the rarer ones containing weapons and armor while others resources and consumables. Almost every building can be fully explored, and furniture scrapped for resources as well – the same goes for barrels, pallets and many other props. Time is always running out, counting towards a deadly night.

Character Management
Is done via the inventory menu which allows weapon and gear customization (if one has the correct mods), while also throwing away unwanted loot, since a weight limit and a resource cap on each item are both present. The capacity can be expanded by finding better backpack types. Different weapons use diverse types of ammo, while using materials to craft consumables such as grenades or medkits is a good idea to save space and have them ready.

Combat
Works out in a top-down shooter fashion, using ranged and melee weapons to destroy the infected or other threats. Ranged weapons have a maximum range past which they deal no damage, and as well a laser-sight that has to be on the targeted enemy in order to hit it. Some enemies result resistant or even immune to different types of damage, for example Fire Damage or Explosions. Most weapons deal normal damage but a few ones vary the type, such as the Flamer. Killed enemies drop ammunition or consumables quite often, though it’s not uncommon to run out anyway.

Death of all party members will roll back the game to the start of that day, so there is not a whole lot of progress loss. Teammates can be revived an unlimited amount of times as long as they are wounded on the ground and not too much time passes.

Events
Are challenges randomly spawned in the world, each with different objectives such as killing a specific number of enemies with a specific weapon, defending a position, or escorting an NPC. Rewards may vary, but they are always extremely worthwhile; time also stops while an event is running, which is fair enough and gives time to prepare. The main story has larger versions of events which need to be completed to advance, in case of failure another one needs to be found in the world.

Building
Is mostly performed at night or during events, but can be done anytime, anywhere. Barricades, barbed wire and even automatic turrets are the bread-and-butter of this system which allows players to quickly fortify any location. If one has the materials and blueprints, any garage or house can become a fortress to survive the night, when roaming around means certain death. This system gives a new dimension of gameplay, is well done and changes the pacing completely at night, which keeps the game from getting stale. 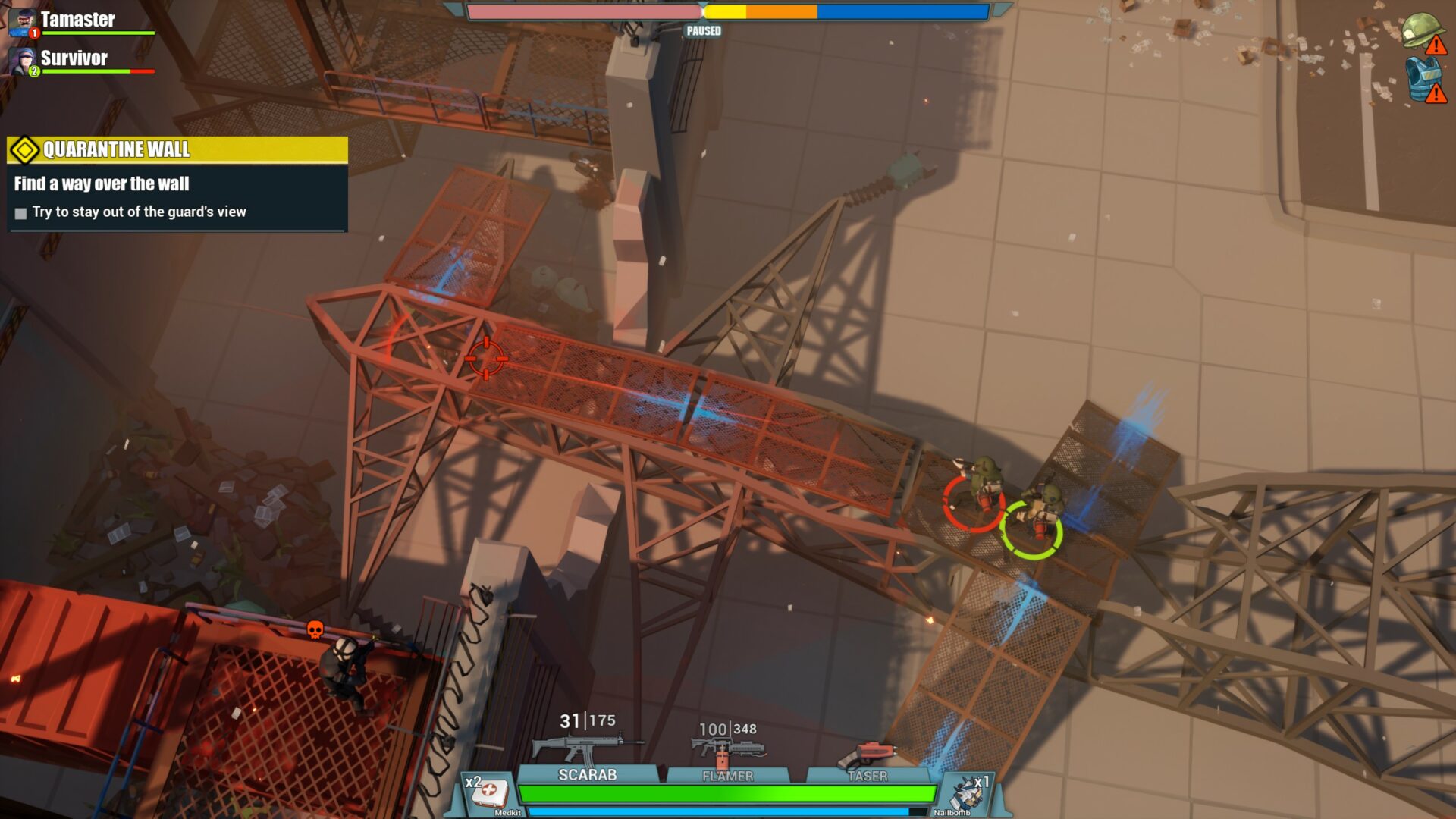 Bugs & Other Issues
– Infected pathfinding can sometimes glitch, making enemies unable to reach players correctly.
– Camera angle issues in some areas.
– Players with different Steam Download Regions are unable to join each other in co-op. Set region must be the same.

10 Miles to Safety is actually a brilliant Indie shooter that manages to merge different gameplay mechanics from many genres into a single experience – and does so with a remarkable level of polishing. While not perfect and with some drawbacks, it delivers a fun and involving experience in both Solo and Co-op modes that makes it worth being played by any shooter and crafting fan.