A tactical turn-based game where we take control of the surviving crew of a US submarine. While trying to find a way to fix the damaged submarine and find all the rest of the missing crew, we delve deeper into a world of unknown with strange phenomena, dangerous creatures, and many mysteries. It’s clear from the start that this game has a Lovecraftian theme, presenting the enemies as unusual and horrific and part of something larger and portending. All this is supplemented with the Cold War theme elements too. 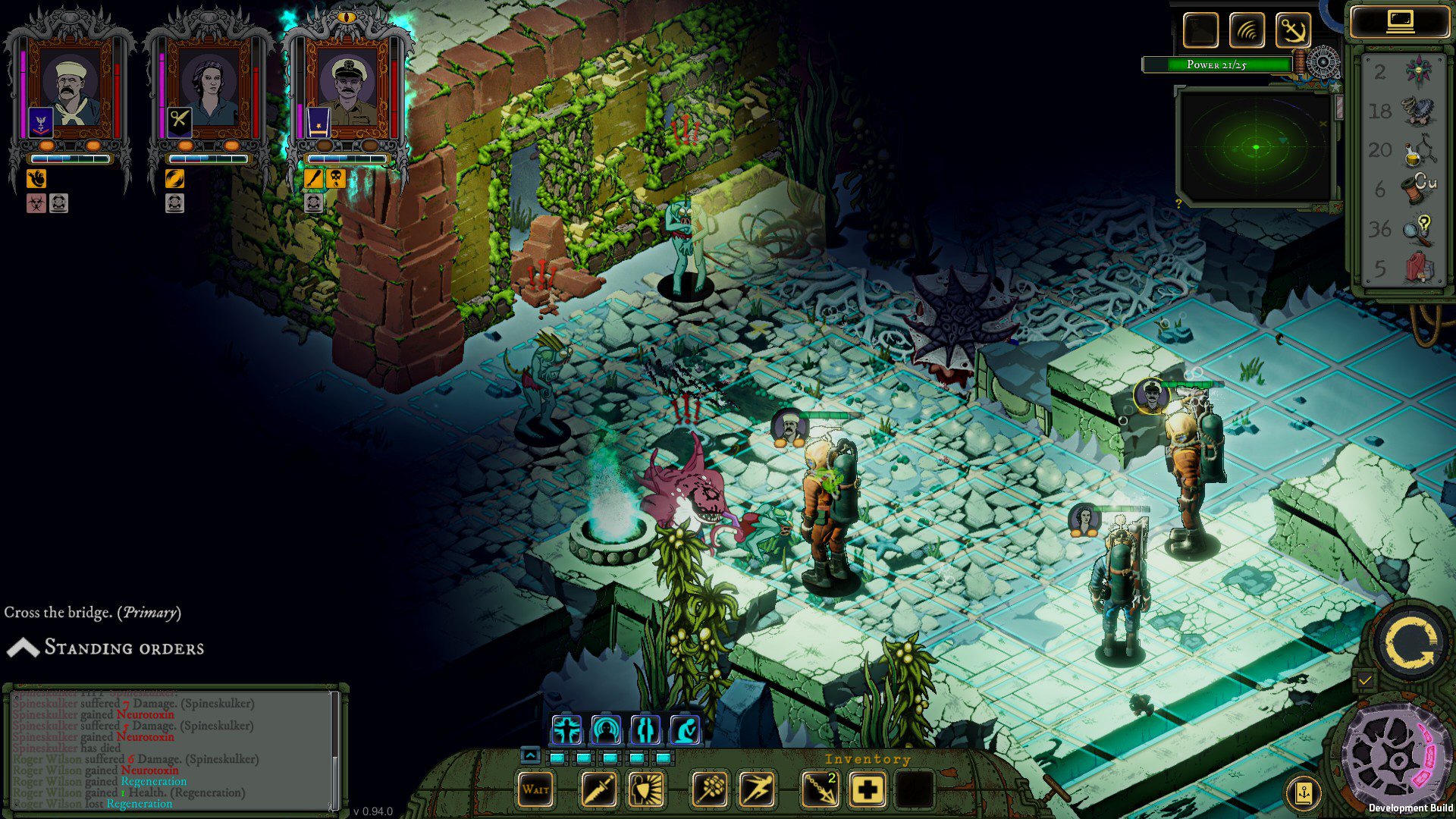 The characters we start with appear to be randomly picked from a selection of premade ones whenever we start a new game, so you might find yourself starting with someone entirely different the next time you start the campaign. The characters themselves and their backstories are not so relevant, rather that they’re all part of the same crew.

Most of the story is told through log files and other finds that we discover when going through the missions. There is also some radio chatter shown as speech bubbles between the crew, but there are no cutscenes and active dialogues otherwise.

The story is not much of a focus of the game and tends to be more in the background. We spend a lot more of the time on exploring the areas, getting into combat, and managing the crew. 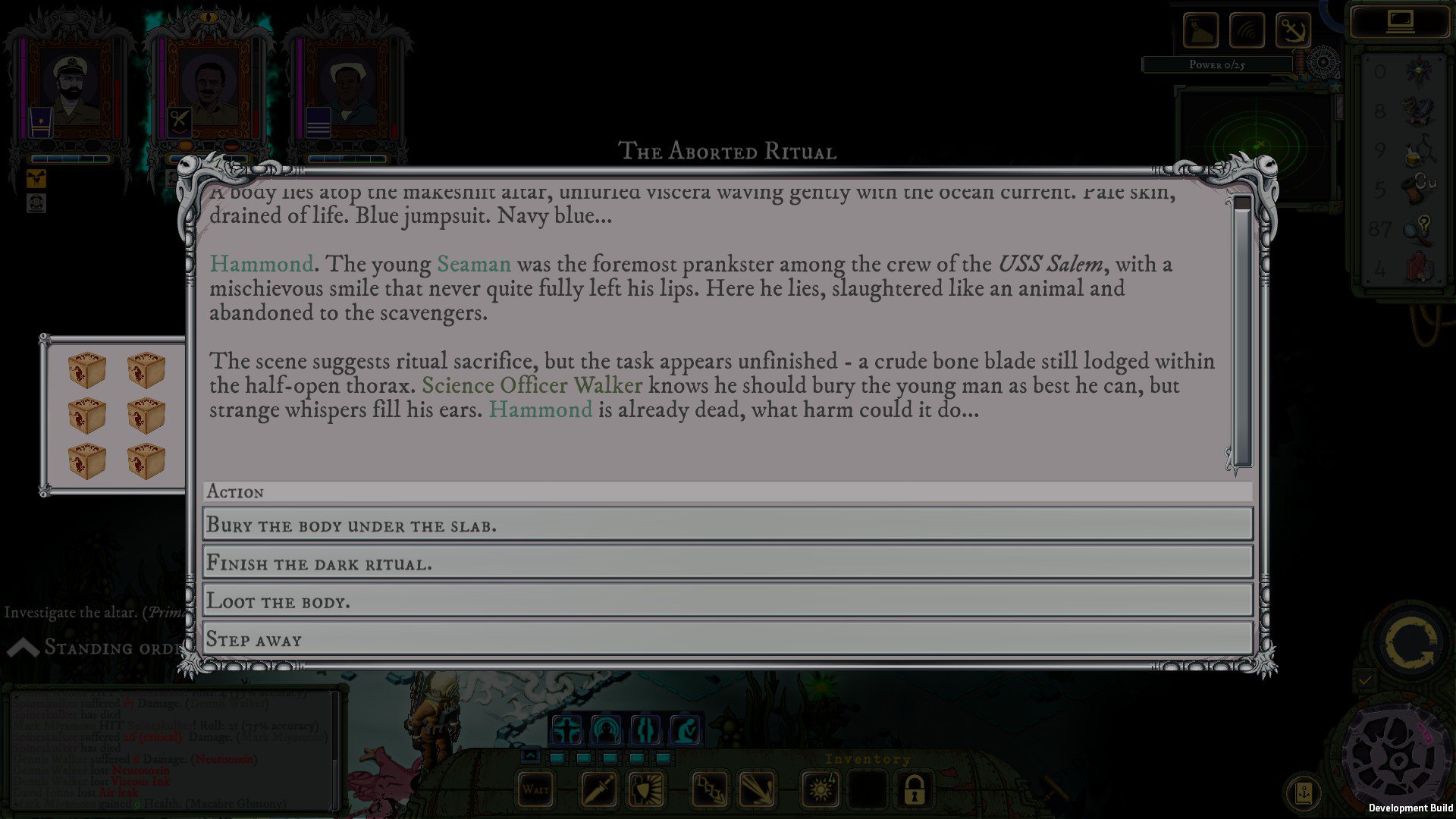 Gameplay – at the Sub

The main focus of Stirring Abyss is on the tactical gameplay with some RPG elements. It’s very much like XCOM and Final Fantasy Tactics mechanics put into an underwater Lovecraftian themed story. So, let’s break down the different aspects of the gameplay.

Outside of missions we do a lot of crew and submarine management. The crew we can heal, level up, and equip with different gear during this phase. The submarine consists of a number of chambers. At the start, all of these chambers are flooded and we require to use the ‘power’ resource to pump the water out of those. Any chambers that have been freed from water then need a varying number of other resources to fix, such as scrap metal and copper. Some of those chambers have a specific function (such as passive healing of the crew in between missions), while others are convertibles that can be turned into a number of different functions from given options.

Also in this screen we can use our resources to research and craft new equipment that can be equipped to our characters. Some of the equipment are weapons like speargun while others are one-off items such as medkits and turrets. The research points we accumulate we can also use on acquiring various passive bonuses on the whole crew, such as increases in health, damage output, and other nuances of gameplay. 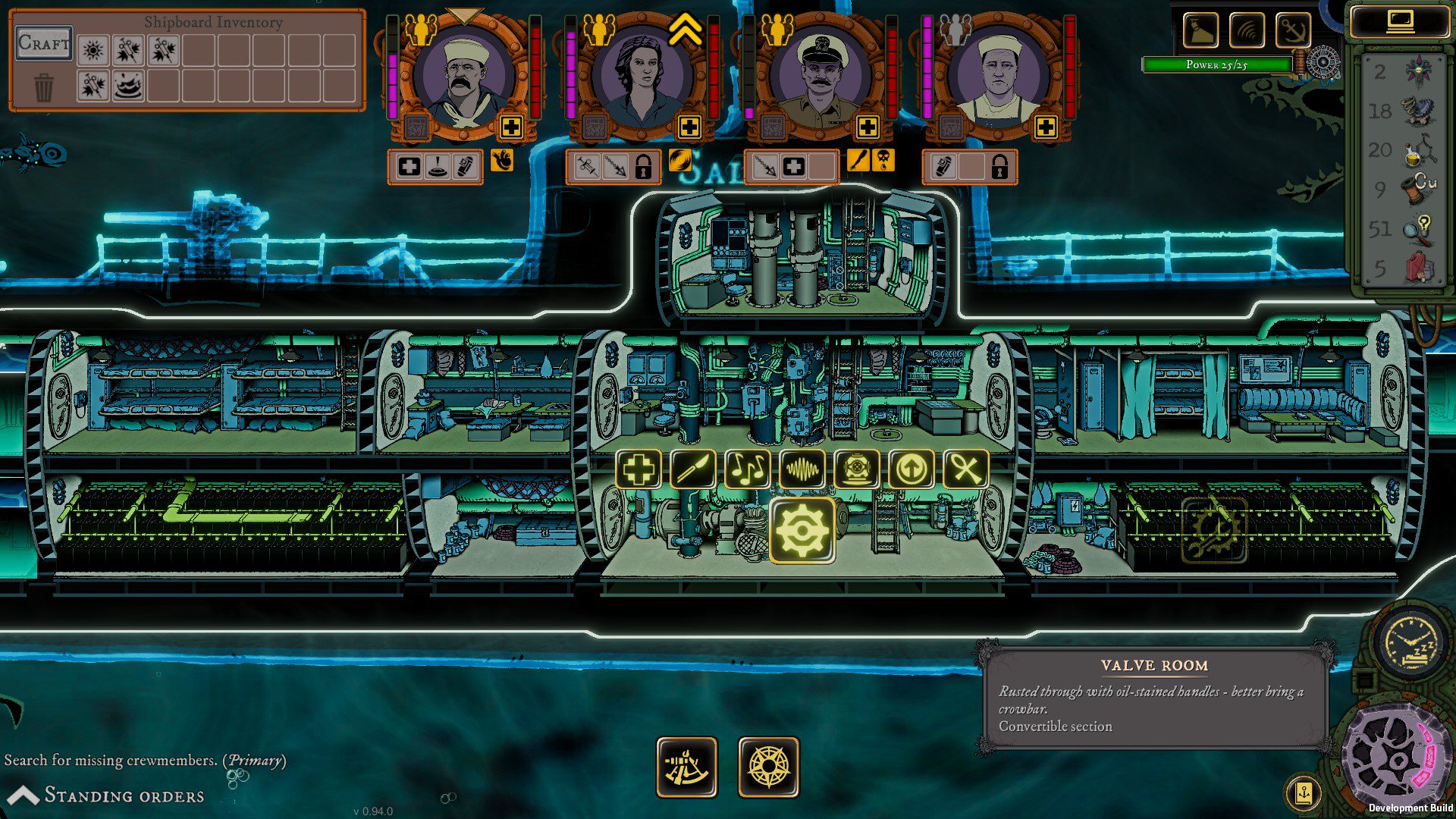 Gameplay – in the Mission

The missions themselves all happen underwater and are presented on an isometric grid with turn-based movement. Just like in other tactics games of this type, such as XCOM and FF Tactics as mentioned earlier, each character has limited number of actions points, which determines how far along the grid they can walk. By default, each crew member has 2 action points. Walking drains action points bit by bit (i.e. you’d need a certain number of steps to drain an entire action point), whereas attacking enemies or using equipment uses up a single full action point. This gives flexibility, such as letting the character walk for a bit, perform an action, and then walk some more till both action points are fully used up. 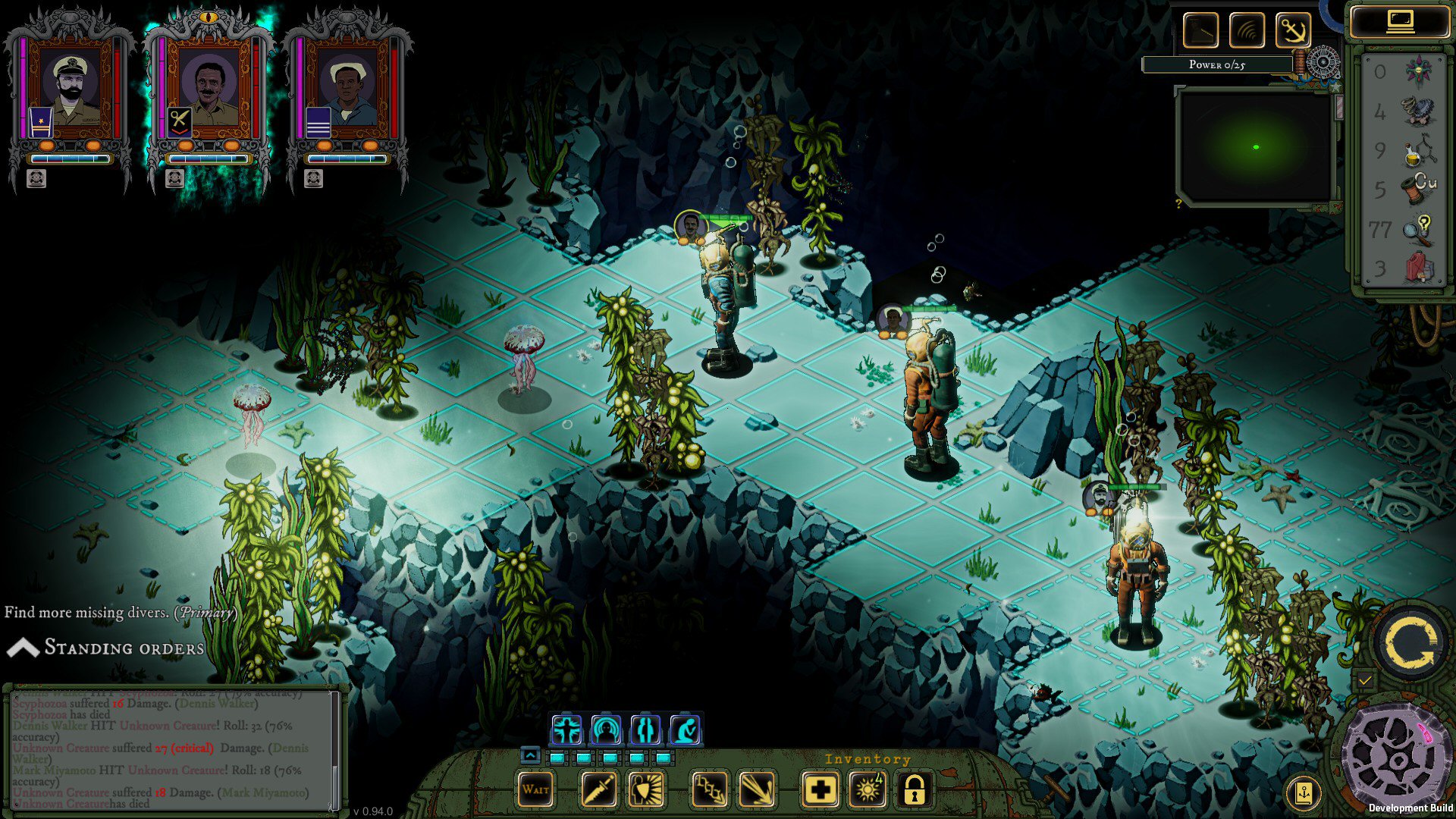 The combat encounters behave in a similar manner to other isometric tactics games. For melee attacks, it’s necessary to stand on an adjacent tile to an enemy, whereas ranged attacks can be used from further away but get penalties to accuracy if the distance is too great or if shooting past obstacles.

This game deals in a Lovecraftian theme, so it won’t be complete without some sort of a madness mechanic. So, each crew member, in addition to their general health, also has a sanity bar. If the sanity drops to zero for them, they go out of our control for one turn, at times simply fleeing a few tiles from an enemy and other times attacking their own teammates. On the next turn, they’re back to normal, at full sanity, as though nothing unusual ever happened. This type of sanity mechanic is not as harrowing as in games such as Darkest Dungeon for example, but it can cause some mild problems during missions if not given proper attention by the player.

Another thing possible in the game is to acquire mutations on the characters. We get these when we find a specific item, which allows us to grant one mutation to any crew member. We usually get a choice of one of two random mutations, and these usually provide some interesting new gimmicks to benefit us in the missions, such as allowing us to consume corpses for health gain or to use a tentacle grab ability for example. 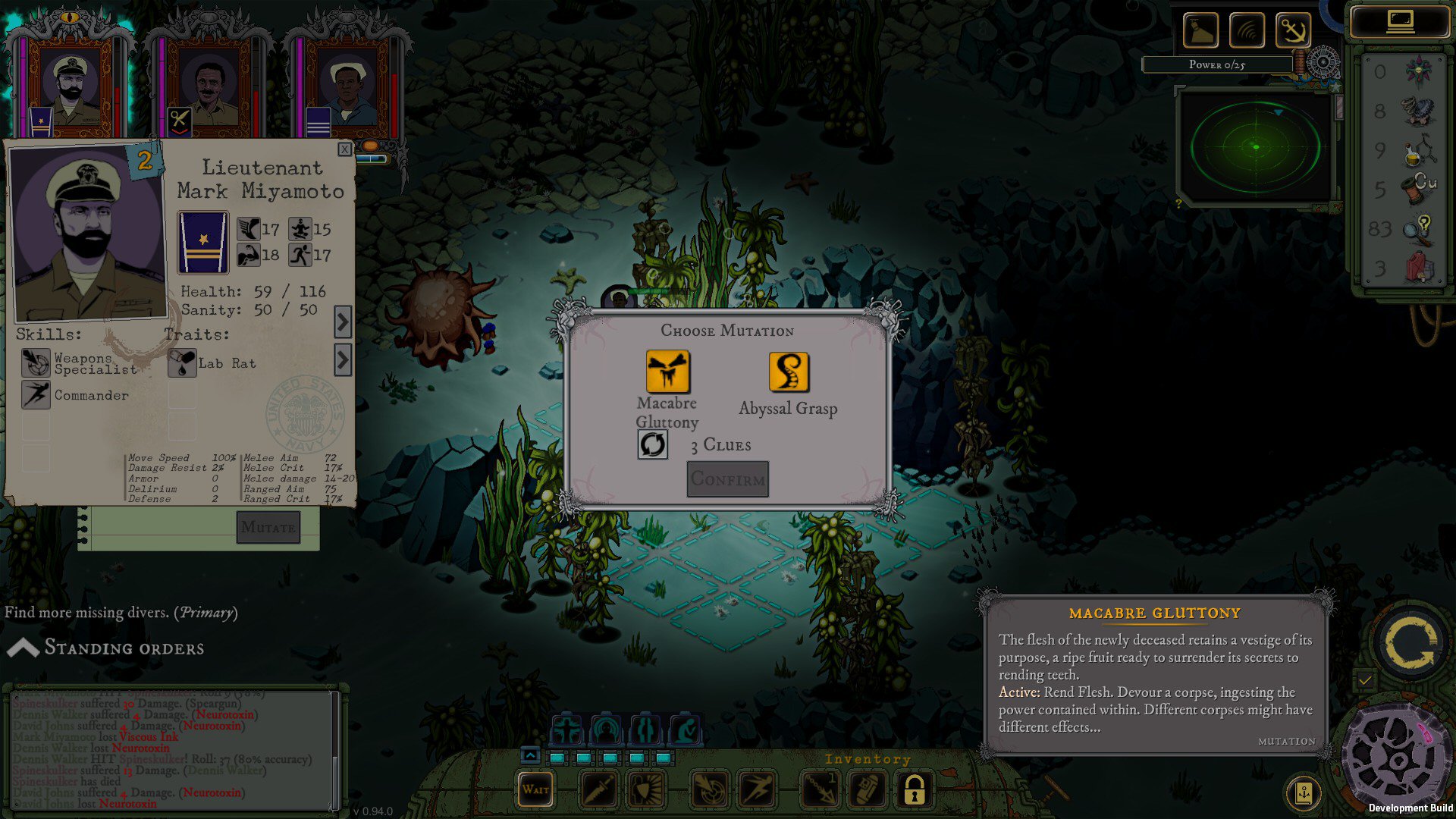 Also, since we’re underwater, all our divers have a limited air supply. The air is used up after every turn, so it’s not drained in a live manner. This puts a little bit of pressure on us to keep making progress and not stall, but the missions do have air vents where we can get air and we can also bring spare oxygen tanks with us too, so the pressure is not huge.

This game has several roguelike elements to it, mainly permadeath of any crew member that dies in battle and randomly-generated level structure on each new playthrough (though the objectives during main missions are the same, the levels themselves aren’t).

There are a few things to criticise. Although the game offers a lot of cool abilities and gadgets to use, it can get pretty repetitive by latter missions as the crew ends up doing mostly the same things in most combat encounters. The levels also for the most part look very samey and the enemy variety is not huge. I think this is also made worse by the fact that the crew members we use all look the same when on the field and do not have any signature traits or gameplay strategies that make them stand out. They all feel like identical drones. 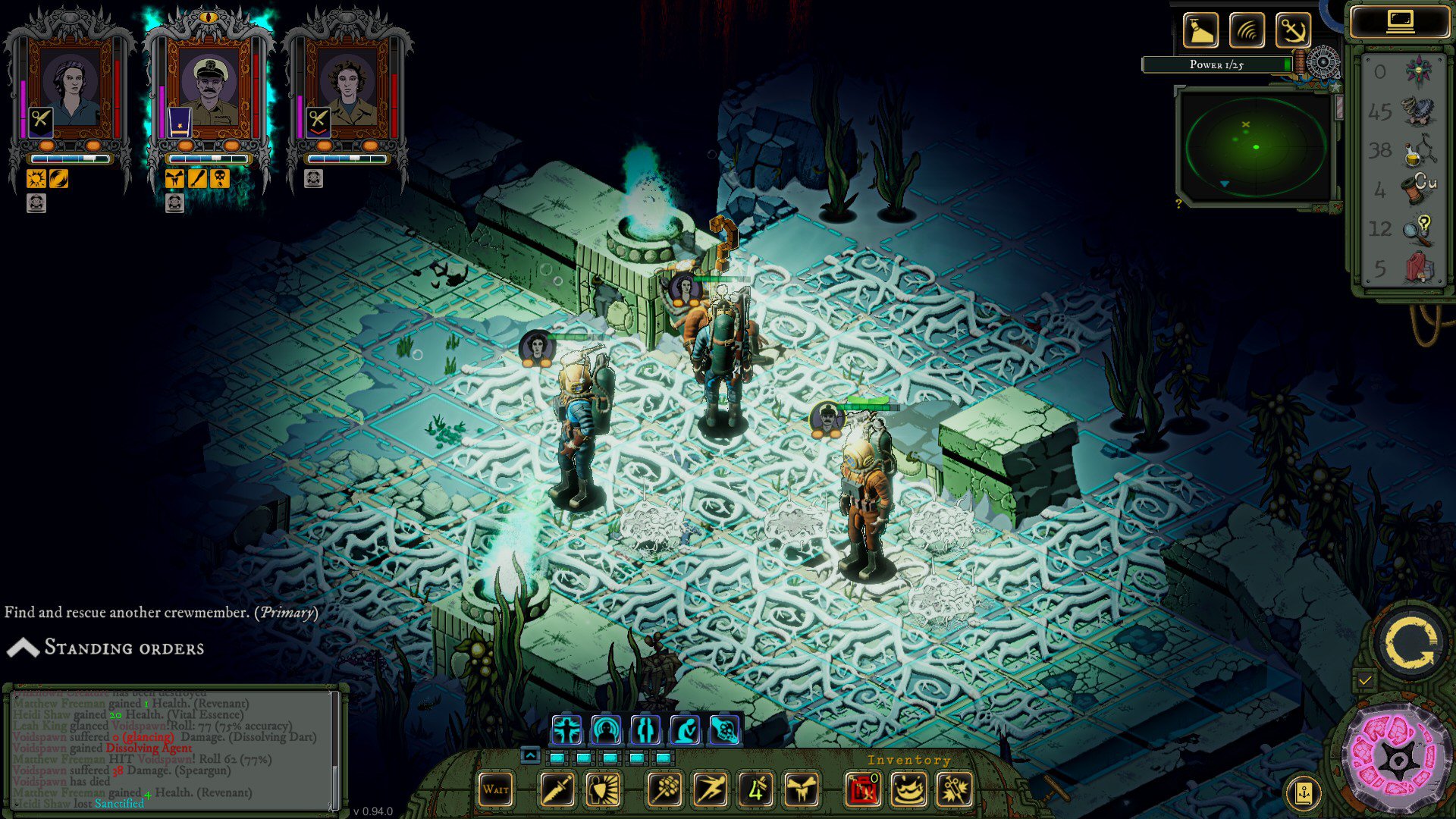 Another thing I noticed is at times the game has difficulty spikes. It could seem manageable for several missions and then have one mission that is suddenly way harder. And if a crew member or two that you use a lot die, then you might not have enough crew members to win the mission upon a retry, or you might have low level crew members left over that are weaker. This can put you in a stalemate and require a restart of the whole campaign. I think a better progression system could’ve been implemented to make it easy to power-level other crew members that we find later or have them gain some experience passively. The game offers a way to upgrade to spend resources on that, but resources are already very scarce. If you’re missing one crucial resource, it can stall all your other upgrades too.

When I played the game in the late beta phase just prior to the release, there were a few bugs present still, such as craft inventory suddenly disabling for a couple of missions and one mission causing me to accomplish its objective before I’ve even done anything. At one point the game was also permanently stuck during an enemy turn, requiring a force shut down of the game. It’s possible that some or most of these will get fixed in the early days after a release.

The game’s visuals are done in a nice art style, managing to be both colourful and also thematically bleak at the same time. This bleakness shows the underwater depths really well, but it achieves this without being monotone in colour, which is quite a feat. 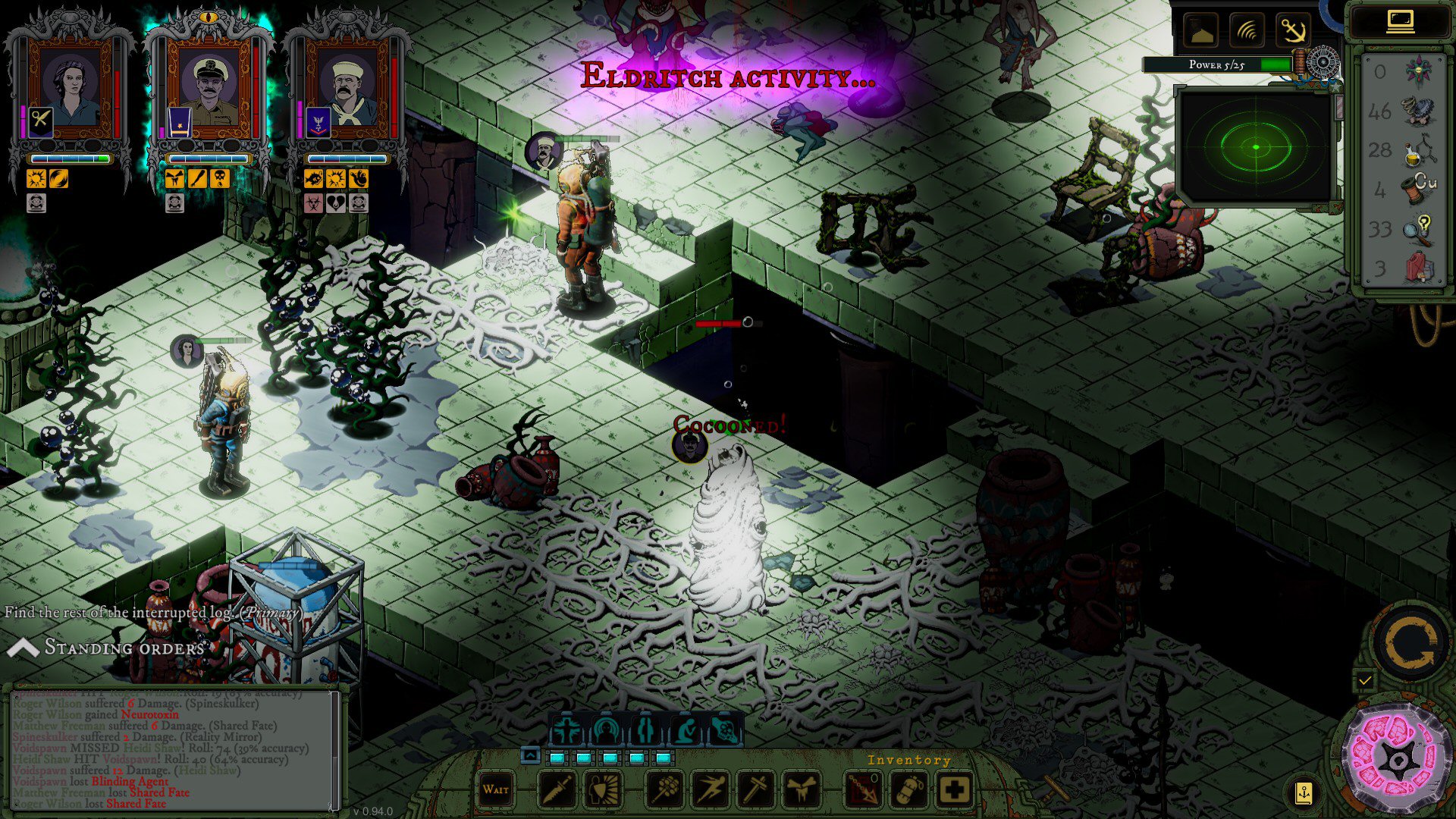 The UI, icons, and grid are also all well-presented and help with the user experience. There are also pop-up tool tips giving us more information when we hover over various skills or equipment in the menus.

There can be a bit too much reading at times when interacting with story-related objects in the missions, though it can be skipped if the player is mainly just playing for the tactical missions.

The music is very atmospheric and builds tension excellently. In combat encounters it can get especially quite intense with a mysterious flare and suits the feel of exploring the unknown really well.

There’s no voice acting in the game. Any dialogue that we see is usually shown in speech bubbles and there isn’t much of it usually as most of the focus in on exploration and combat rather than characters talking.

Stirring Abyss is a nice and tough isometric tactics game. It’s got a very thematic level of presentation and setting and a lot of interesting RPG and rogue-like mechanics. Perhaps it is not the best in the genre, and there are many games of this type that are better. However, if you’re already a fan of tactics games, have played many good ones to death, and want something new to add to your collection, then Stirring Abyss is worth getting. I’d give it a high end of ‘Save for Later’ rating.