When lack of balance goes too far

Tears of Avia has had a lengthy and not entirely trouble-free development. 5 years ago, back in 2015, they launched the game on kickstarter, and the campaign did not reach its goal. Development still went on and now the game has finally been released.

SPRGs have been around for nearly as long as JRPGs, and the genre is quite diverse. Tears of Avia seems to be aiming for something somewhat in-between two of the genre’s juggernauts, Disgaea and Fire Emblem. Like in most SRPGs you’ll be recruiting new members to your small army who will level up and grow more powerful over time. Permadeath is an option, but it’s not mandatory, and like Fire Emblem you have a limited pool of characters that you can recruit along the way, but unlike Fire Emblem you can go back to past levels and level up anyone you think is trailing behind.

The world of Estera is at war. Two great nations are at each other’s throats and during this turmoil monsters are starting to appear. And this is where your character comes in. The small village they’re staying in is getting attacked by ghouls and only with the help of a local boy they’re able to drive back the undead.

But in doing so they find a tear-shaped gem. This gem, as it turns out, is one out of several, and only a special individual, a seeker, is able to find them. These gems hold special powers, and might be the only thing that can save this world. But daemons are also after them, and they are willing to do anything to get their hands on these gems.

Tears of Avia is surprisingly light on story for an SRPG. During key moments there will be dialogue between the characters in the party and some NPCs, and you’ll also get a scenes away from the party, where the villains show up. But these dialogue scenes can be surprisingly far between. You can also find some NPCs in the major cities that are willing to share a few words with you, and even join your party. Other than that there’s not a whole lot. Every level has a bit of text explaining what’s going on, but a lot of these don’t add much to the story, or the world building. What story is there is not bad, but it does feel a bit generic, and it’s not enough to carry the game. 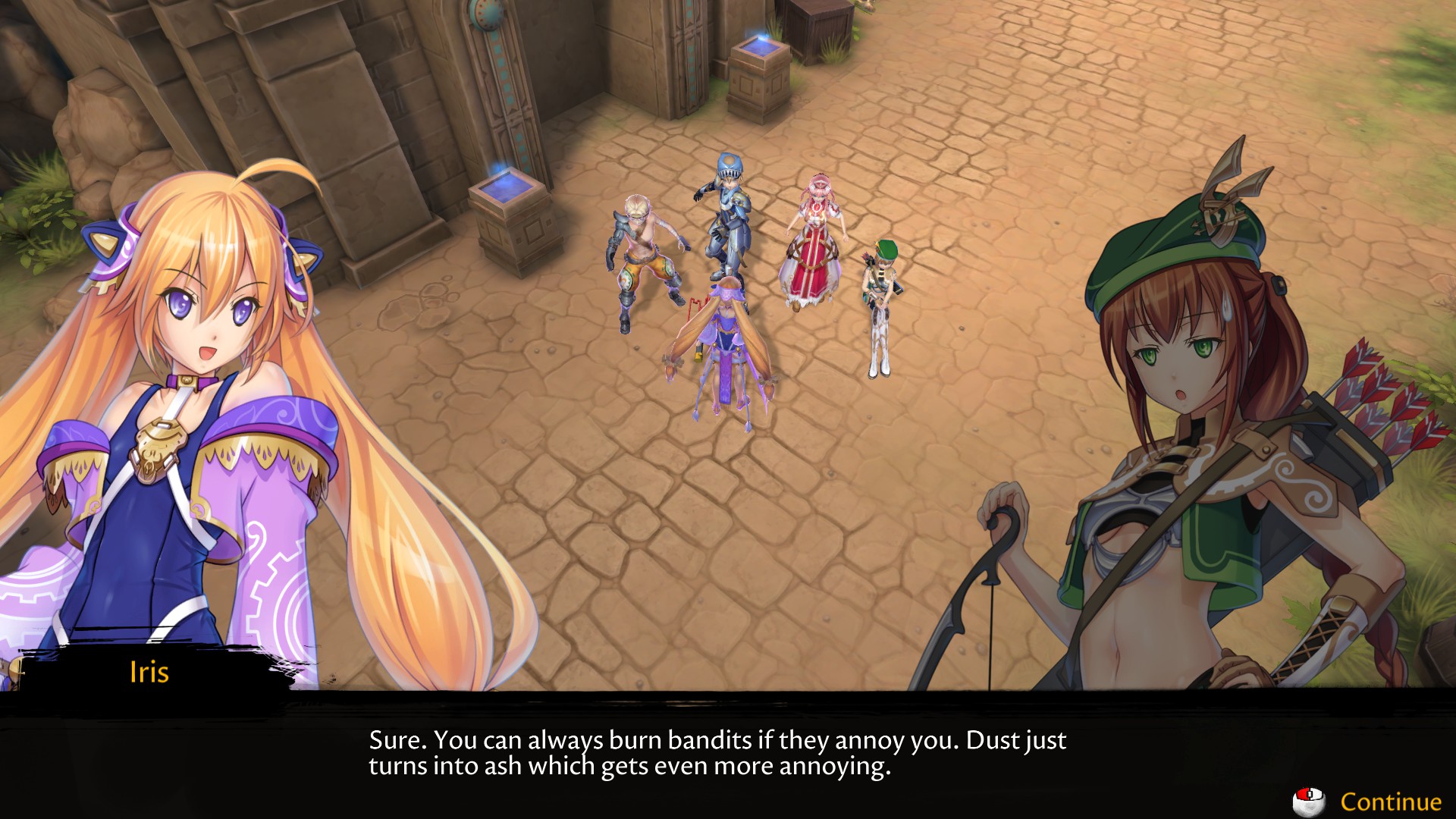 Much like the games that inspired it, Tears of Avia has an anime/manga-inspired art style, and this is visible in both the characters portraits and models. The portraits are well drawn, but they don’t have a particularly unique style to them as many other games use a similar style for theirs. The character models that are used during missions and exploration don’t look quite as good as the portraits but every character has their own unique character model. These character models do look a bit stiff though, and their animations don’t feel entirely natural.

Most enemies, of which there are not that many, also share the somewhat stiff animations of the main characters. They don’t terrible, and there are some interesting enemy designs that start showing up after a while, but the animations, and the lack of variety, does drag down the overall look and feel of the game.

Faring worse than the enemies and party members are the townsfolk. Between levels you’ll be visiting one of a couple of towns, and after the first one you’ll see regular people populating the streets. A lot of them actually. These character models don’t look very good, and they’re hardly animated, so you have a horde of poorly made character models just gently swaying back and forth, feet rooted to the ground in the cities.

The game is fully voiced, in Japanese, and while it’s hard to judge the quality of voice acting in a language you don’t speak, the voice are at least not annoying. There’s also of course English text, so you don’t need to know Japanese to play this game. And in terms of general audio, the game is pretty good, though not in any way noteworthy. The music works well as background music, although it’s not very memorable, and the sound effects are decent enough, without being annoying. 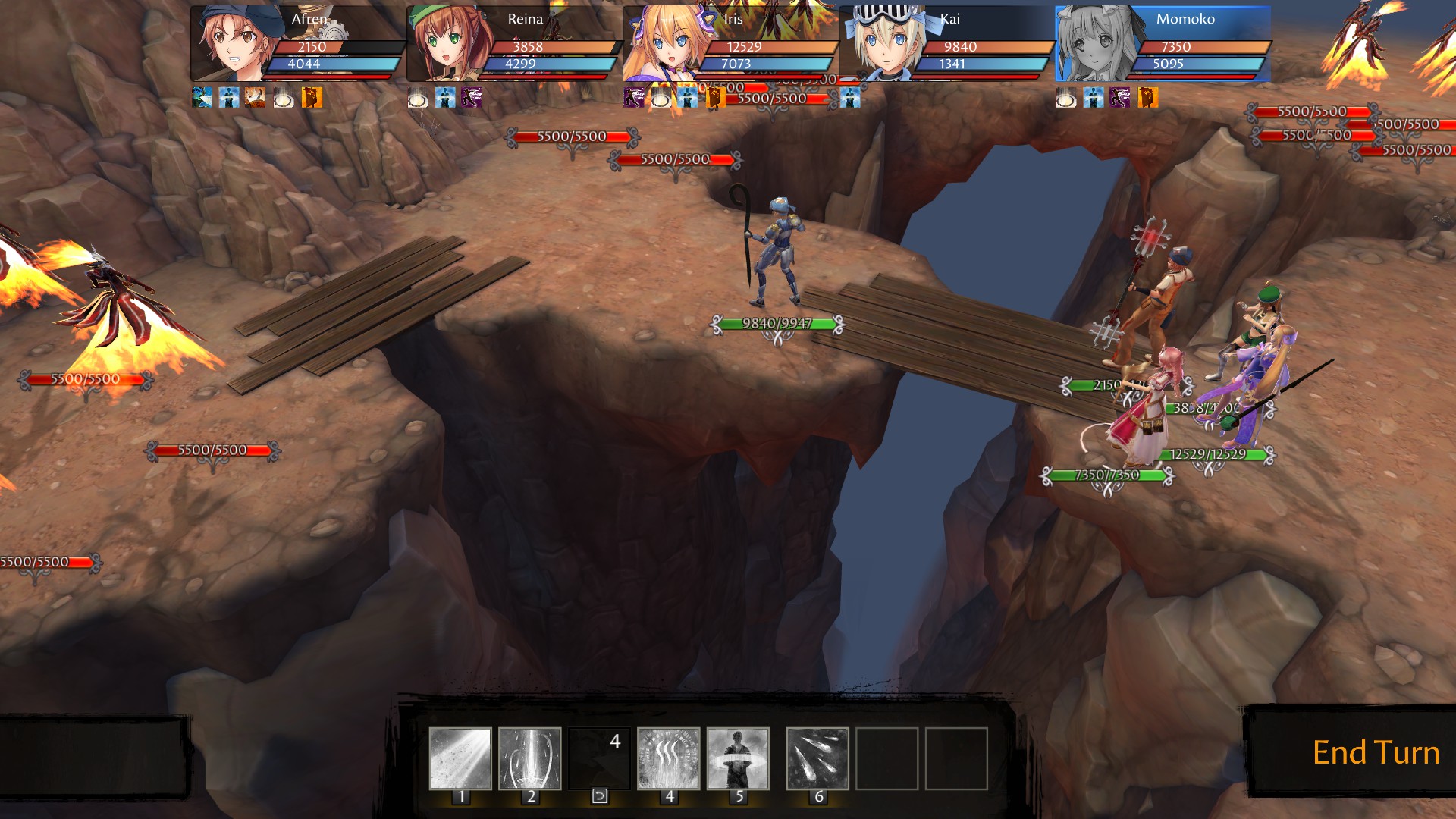 Like in most SRPGs you have a small but expanding band of characters that will stay with you between levels. When they do things, like using abilities and killing enemies, they earn experience points, and once they’ve earned enough experience points they level up.

There are two difficulty modes, one where losing a character does not matter much, enemies are a bit weaker, and there are no special effects on each level, and another where death is permanent and if you lose a key character you’ve lost the game, and each level has some additional effect that complicates things. The game constantly auto-saves, so it’s not like Fire Emblem where you can just restart a level if you lose a character, it’s gone forever, and if it’s a key character you’ll have to start from level one. The game does not actually tell you who the key characters are though and it’s not obvious which ones are important. Not all of the 5 potential main characters are key characters, but one is. Your chosen main character is also always a key character. 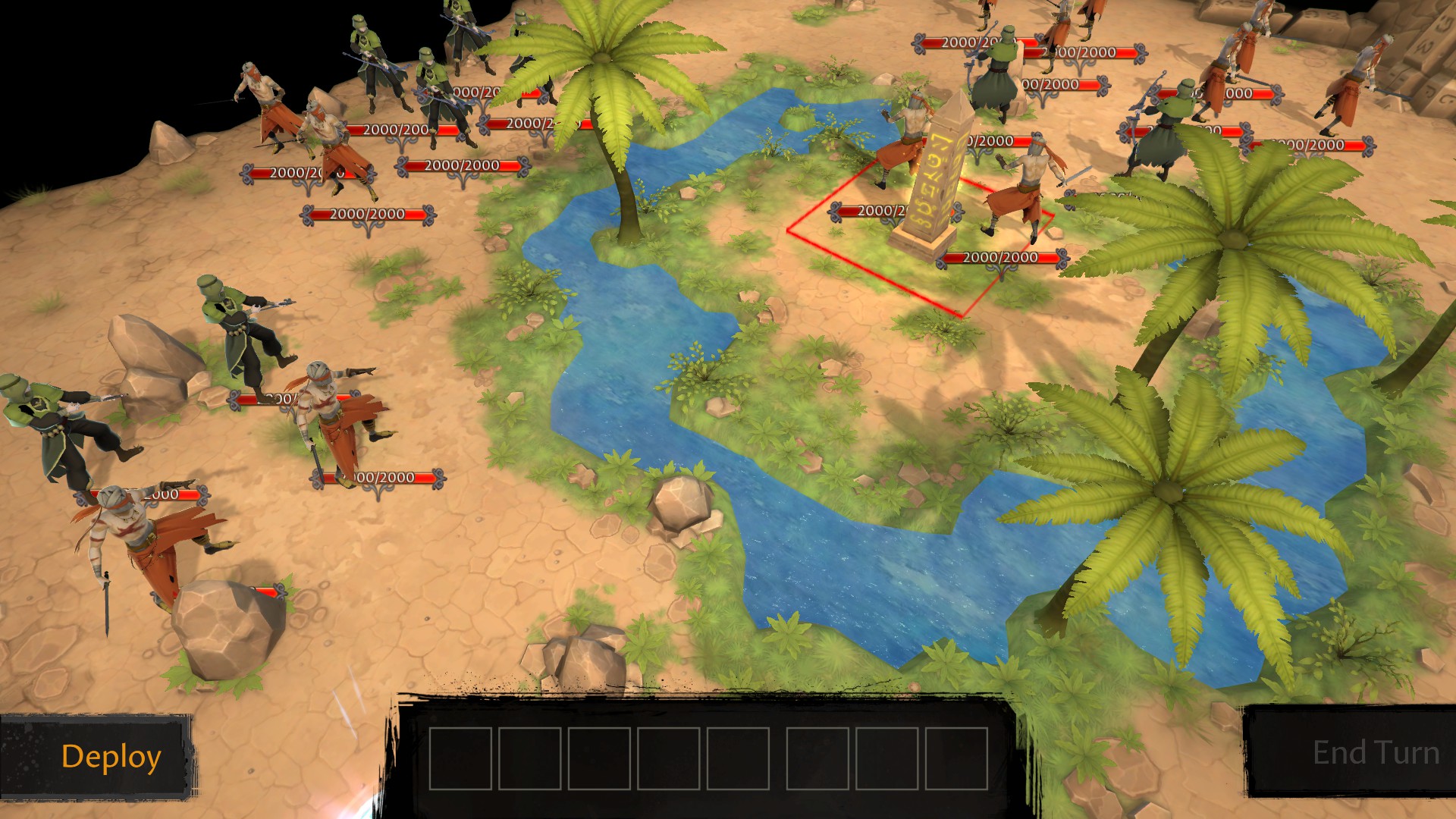 The game is split up into a number of levels, and between each level you’ll be sent back to the last town you visited. The levels are not randomly generated, so each time you play one, and you can replay them, the enemies will always be in the same place, and have the same stats. The length of the levels can vary a lot though, some can be beaten in a single turn, and there are those that realistically will take you over 30 turns to beat the first time you play them. The longer levels are universally the harder ones, as these have a lot more enemies. For some reason the longer levels also tend to have far more difficult enemy placement, with large groups of enemies group together, often near the starting point.

The level design is one of the games weak points. Many levels have very spammy enemy placement, with a lot of similar enemies grouped together. Some levels also have enemies spread out in the corners of the maps, and as you need to defeat all enemies to complete a level, this can result in you just spending several turns to move your characters in order to hunt down these enemy groups that are tucked away in weird places. The uneven difficulty balance is also a problem for the games higher difficulty, where characters who die stay dead permanently. Coasting through several levels where you feel overpowered and then hitting massive difficulty spike is not great. 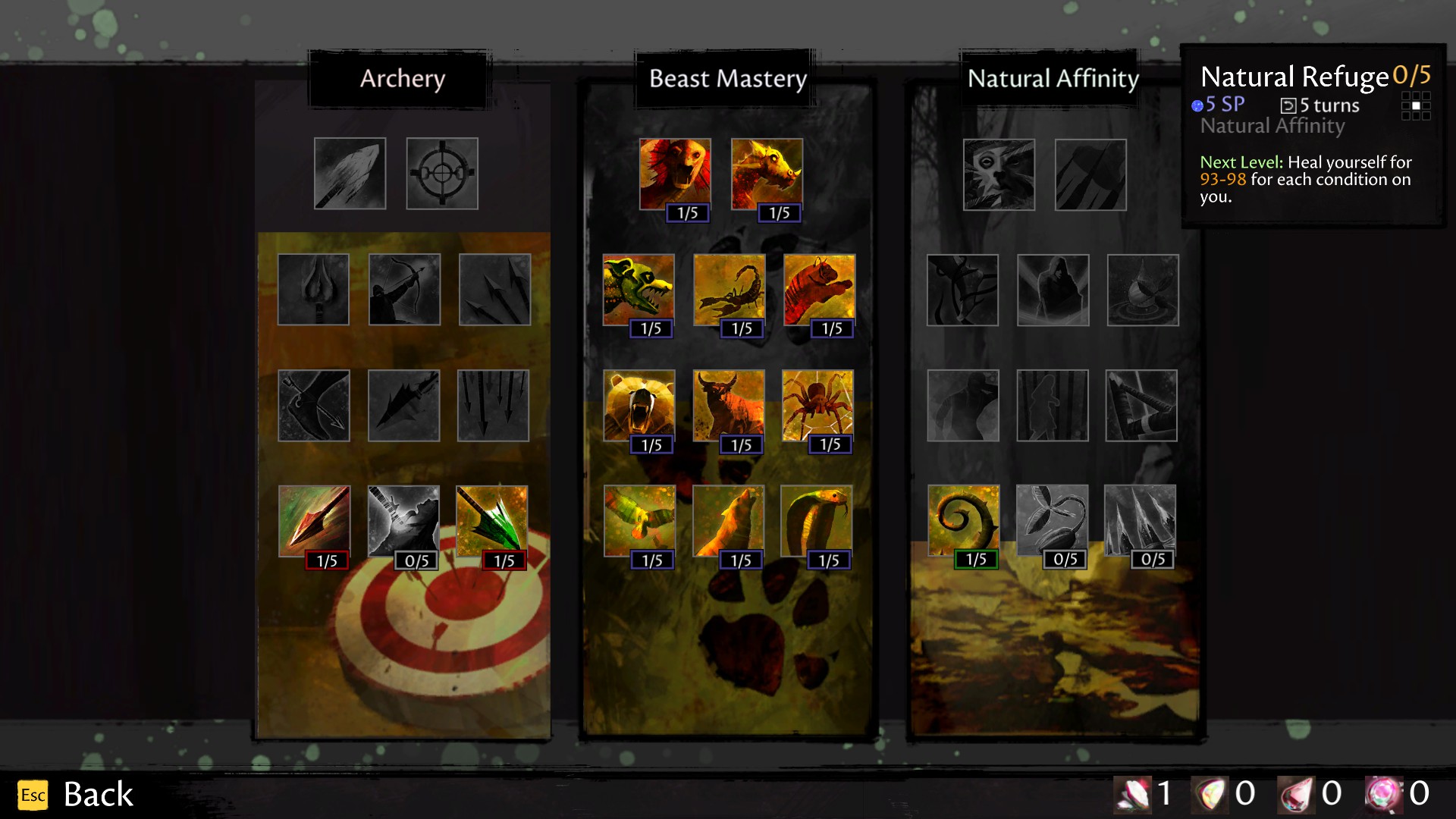 Leveling up will lets your characters unlock a new skill, and every class (there are 5 classes) has their own unique skill three, separated into three different categories. You need to unlock everything in one tier of a category to get something from another. This is a nice system in theory, but the game is too generous with experience points, so you don’t really have to make a choice with what skills you’ll unlock, you’ll get all of them pretty early anyway. Every skill that you want to use needs to be equipped, and passive skills still take up a slot. There’s also some skill synergies, like one skill can set an enemy on fire, and another will deal bonus damage to any burning enemies. So you can have your characters work together by using skills in the right order.

Equipment is more important than levels though, and here’s another problem with the game. You’ll quite early start getting equipment with stats in the thousands, and the game is just not balanced for this. Your characters will be able to one-hit kill all enemies except for bosses, so the supposed skill synergies don’t matter past the first few levels. In fact by the midgame your characters will hit so hard that they could kill most enemies 4-6 times over in a single hit with the damage they deal. The items also undermine the mana system that the game uses. Each skill will have a cost of between 0-80 mana, but when you can get 5000+ mana from a single item the actual difference is academic at best. You’ll not run out of mana, ever, if you equip a single item that gives you some. 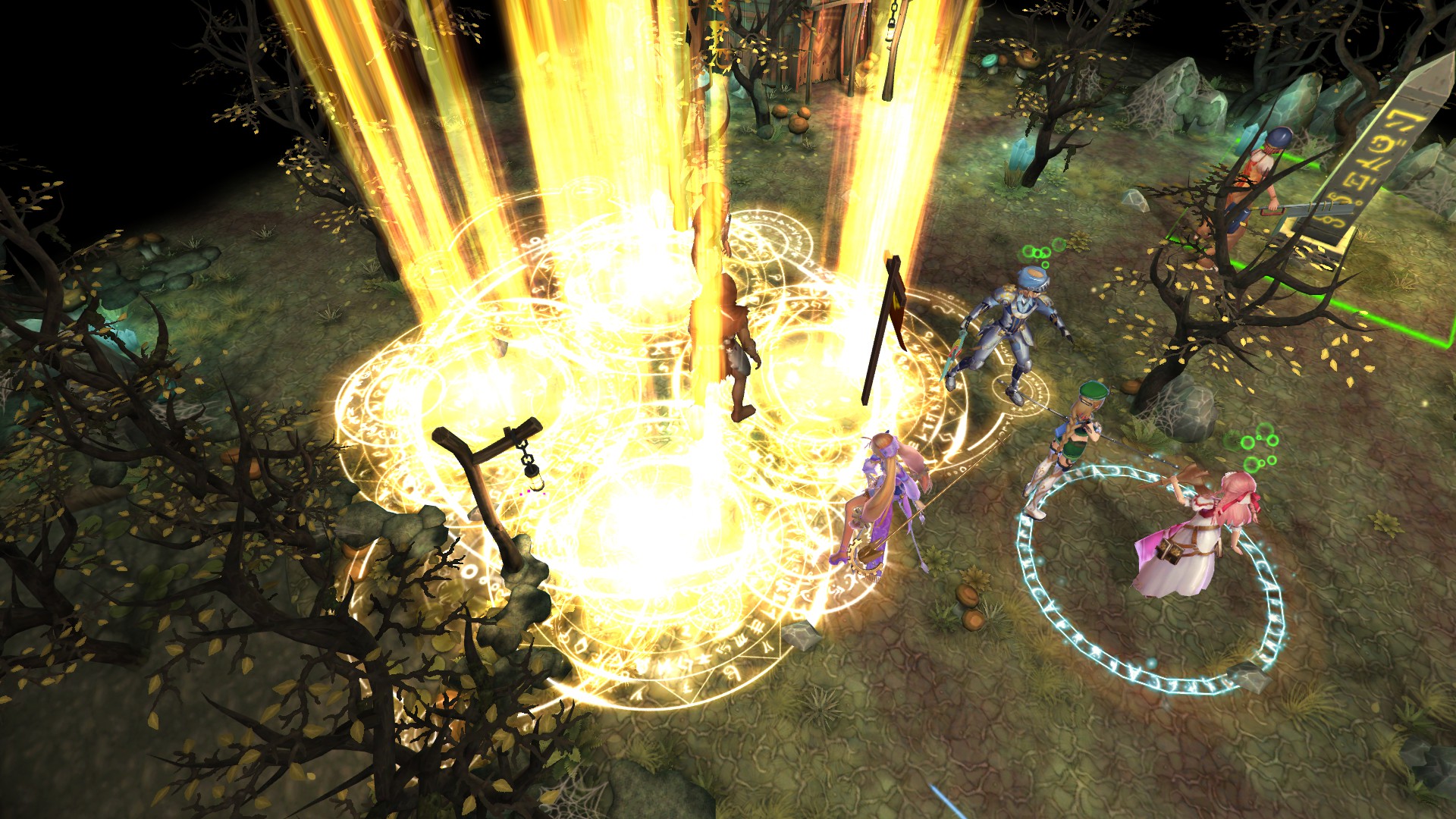 Tears of Avia has some major balance issues. There’s no real difficulty curve, items drop with insane stats early on and certain classes do seem to scale better than others. All of this adds up to a game that’s not very fun to play. The core mechanics are sound, if a bit shallow, but even if they were amazing, and offered a lot of depth, it would not be enough to make up for the busted balance.

Some RPGs, strategy or otherwise, do have stories that are good enough to make up for humdrum gameplay, but sadly Tears of Avia does not have that either. The story is perfectly serviceable, but it’s not enough to carry the game. Most of the issues this game has would also not be very easily fixed with a patch or two. If they lower your damage output, it would make the long levels really tedious and even more unfair, but at the same time they need to reign in the damage output from the players characters in order to get most of the rest of the game to work. Hopefully the developers will be able to overhaul the game, they have after all shown to be very responsive to criticism, but at the moment I can’t recommend it.