The iconic shooter series returns for the modern era, although in a disappointing and flawed way that doesn’t deliver what expected.

Aquanox Deep Descent (ADD) is a semi-open world shooter set underwater, after the world endured the “Last Day” – an apocalyptic event where most of humanity perished and the rest was forced into oceanic depths. Players impersonate Kaelen, one of the chosen few to be preserved in stasis for centuries, now woken up by unclear circumstances. After a dangerous escape, he and his companions – left without most memories – decide to embark on a quest to find the answers about their past, forging alliances and facing many dangers along the way.

Reclaimed by nature
The setting of ADD is remarkable. Mankind was pushed back to a handful of underwater cities, aggregating into unions, clans and factions in order to gain power or simply survive. Despite a nearly species-ending catastrophe on top of a world war, men did not change and keep battling against each other for what little resources are left. Rusted remnants of the old world like stranded submarines combine with mutated overgrown maritime flora and fauna – the lights of human outposts glittering in the distance. Visually adequate and atmospheric, ADD’s setting delivers what’s expected.

Piecing it together
Throughout the adventure, Kaelen and his team will come across many characters, as well recordings from past times. Both of these sources often give out little pieces of lore to know more about society, warfare, customs and dangers of this world so changed. The attentive explorer will be rewarded with a solid amount of knowledge. The presence of an encyclopedia archiving all information on enemies, weapons and lore is welcome, interesting to read. 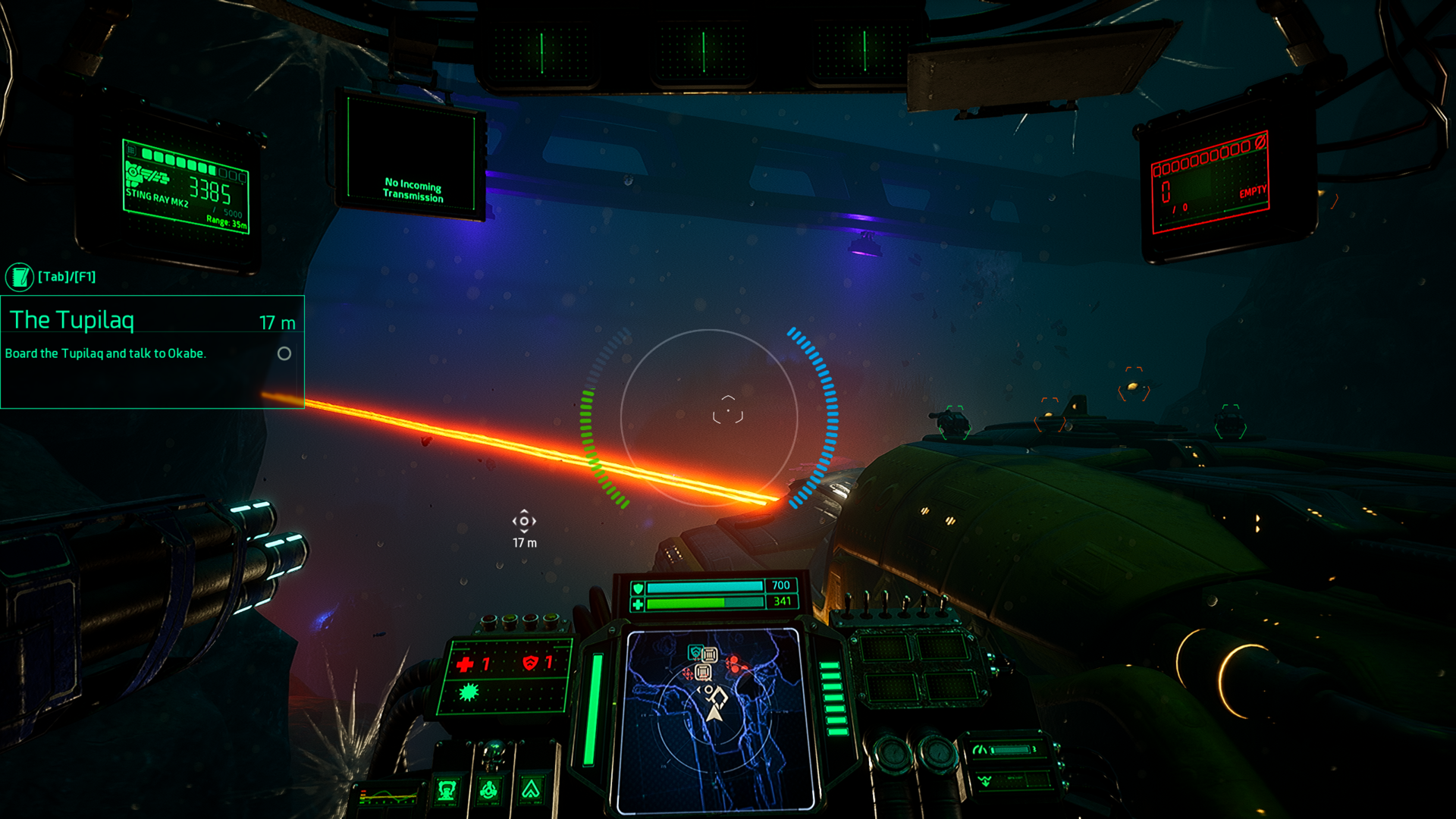 An unremarkable journey
The storyline, characters and events revolving around ADD’s narrative are utterly generic and unremarkable. While the title tries to keep interest up with mystery as the main hook, it ultimately fails because of several factors. The mediocre voice acting, high-school tier writing and lack of depth and personality across the board to almost every character, make the storyline fall into the abyss of boredom. Side-quests are even worse, often dull fetch quests that recycle previously seen enemies, locations or NPCs for cheap filler. It really feels like the Devs didn’t care about this at all, no soul in it.

Cheap thrills
Combat in ADD has a decent concept with potential, but is severely flawed in its realization. For starters, enemies are dumb as bricks – charging mindlessly into the player with the occasional dodge on their part later on, at best. Bosses are always recycled bullet sponges without a hint of good design, while the arena fights, that supposedly house unique combatants, recycle normal enemies with buffed stats. Annoying interface, bad balance making several weapon categories useless and enemies many times just popping out of thin air (water?) in front of you are the icing on the cake.

Progression pacing? What’s that?
For about 3/4ers of the adventure, side-quests included, players unlock only a miserable amount of the total upgrades available for the ships. One or two new weapons may come along and some upgrades too, but they are far from each other and often come at times when they are already useless. Then in the last stretch towards the finale, Kaelen and his team are literally showered with upgrade unlocks like never before, and won’t have nearly enough cash to buy them! This combined with the fact many upgrades and weapons are just not worth using at all, creates an unsatisfying progression. 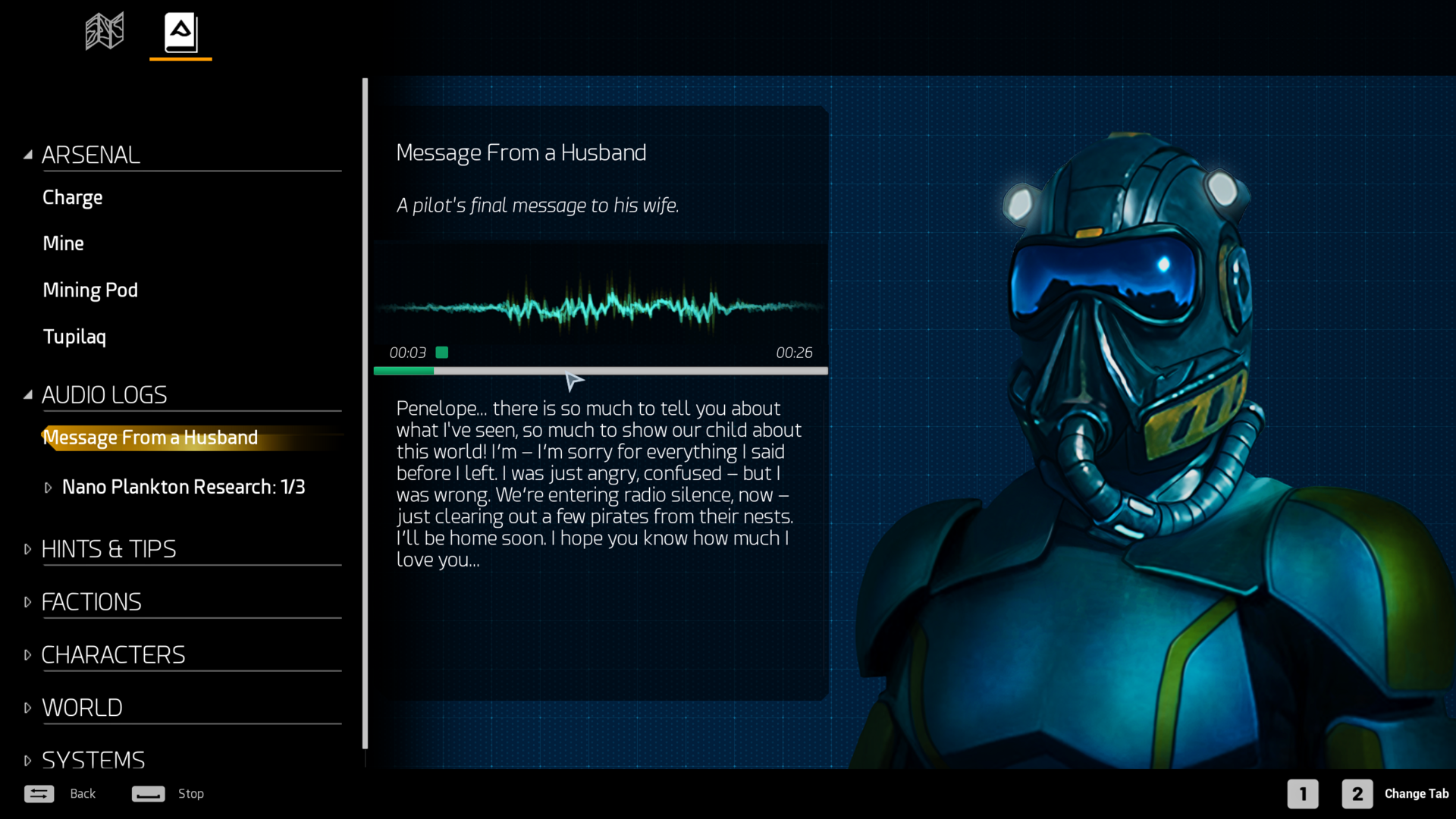 Exploration
Is performed using a DSF, which means submersible vehicle. Roaming the oceanic floors has no movement restrictions, as the ships can go in any direction just as airplanes, just with more friction. The world is divided into sectors linked together by jump-gates, some of which cannot be used until a certain point in the story. Each zone often has an Outpost to dock into for supplies an d quests. There are scattered piles of loot which give out crafting resources or rarely weapons and lore data. There is no fast travel and the pacing of movement is rather slow, which along with backtracking can be a chore.

Combat
Is performed in a first-person fashion, using up to two weapons simultaneously on all ships, while also turrets or secondary abilities if available. fights mainly focus on dodging / strafing away from enemy fire while dishing out damage – too bad enemies are not nearly enough competent to do this reliably most of the time. ADD uses cheap tricks like spawning a mass of enemies around Kaelen out of nowhere, or cramping fights into shooting gallery style tunnels to create more difficulty.

There is a good variety of guns and abilities or use, though the really good ones are few and outclassing all others, which is disappointing. Enemies feel repetitive and generic, with three or four archetypes of fighting styles across the board, the rest just change weapons or ship models, each faction has no uniqueness to them at all. Bosses are just utterly annoying trash, recycled ad nauseam – and bullet sponges. The fact players can spam healing indefinitely as long as they can craft some is cheesy and unbalanced.

Station Business
Is done at any outpost. Players can buy and sell resources at the market, craft ammunition and healing, upgrade their ships modules or buy new ones. This gameplay part is simple and works as expected. At stations one can also interact with NPCs to receive primary and secondary quests to complete in the world. At no point there will be enough money, even by completing everything, to get all upgrades and weapons; which is unsatisfying. Some NPCs are there just for lore’s sake and are really forgettable though, often even sharing the same models or voices. Again, recycled stuff, yay. 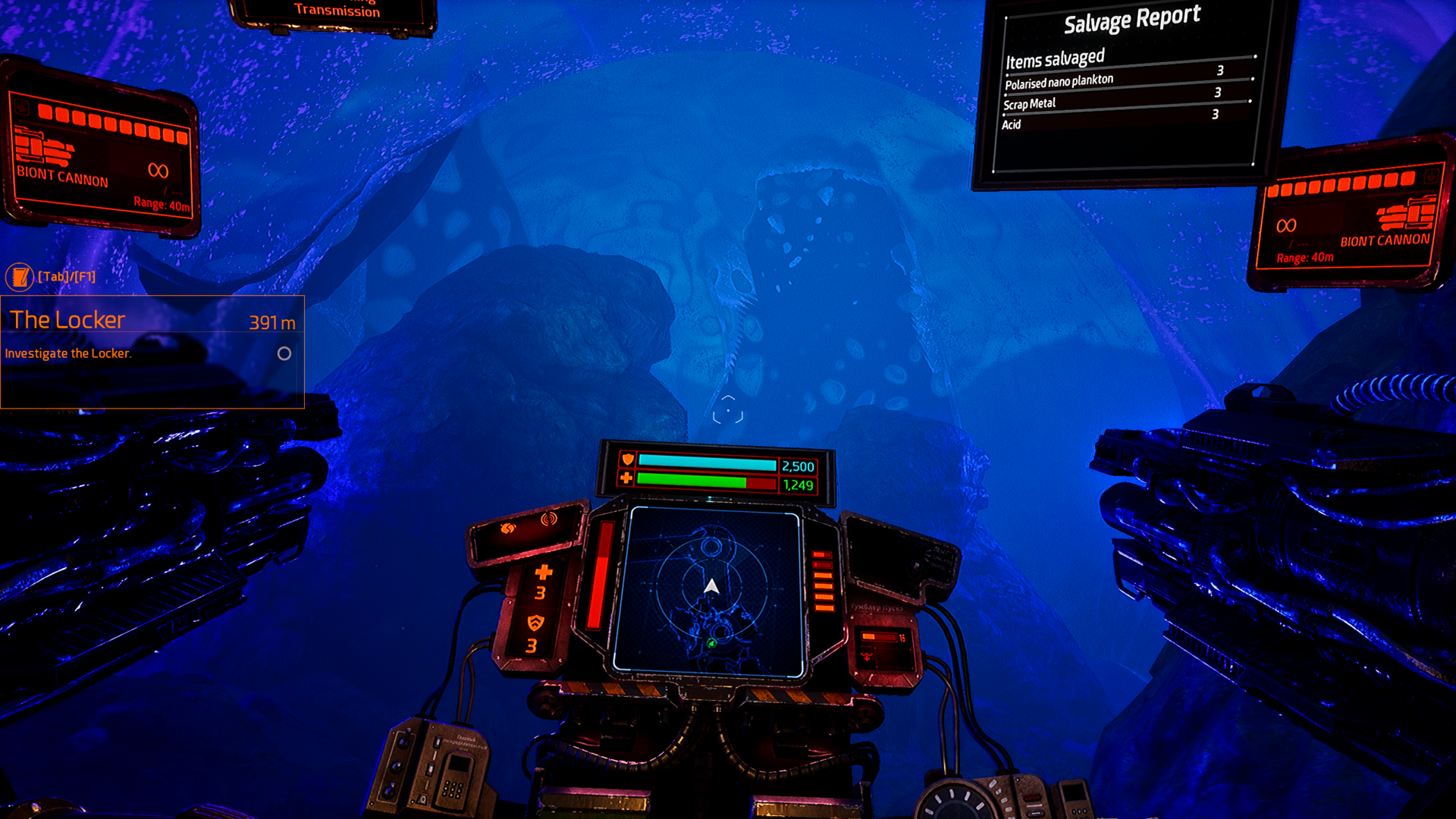 Bugs & Other Issues
– No option for Vsync.
– Distortion effects like DOF, Aberration, Blur cannot be disabled.
– Player vehicle is prone to getting stuck without reason at times.
– Taking screenshots freezes the game for several seconds, that’s why the review has none.

Aquanox Deep Descent is ultimately a game that doesn’t live up to the expectations and legacy of its franchise. Some good points remain, but the largely unremarkable story, weak characters and flawed gamepeplay flow draw this title far, far back into the realms of mediocrity. There is potential here, it just was not used appropriately.