The Good, The Bad and the Neppy.

I’ve probably played practically every Neptunia game available in North America. I’ve often mentioned the Purple Goddess in other reviews I have written for some inexplicable reason including my deep and unfailing affection for her. I imagine I’d be a good source of Share energy on my own. I’m also looking forward to the next main Neptunia game although I have been enjoying the spin offs (even the kind of weird Shooter). I actually wouldn’t mind getting my hands on some of the merchandise related to the game but it is generally sold out or included in an exclusive bundle for a system which I unfortunately don’t yet possess. Without further ado, it’s time to go Dimension Tripping.

Neptunia games are all about the story which is delivered in a few different ways and means depending on the game. The gameplay itself sometimes feels like more of a distraction than the core element of the game which is perfectly fine! So, Hyperdimension Neptunia: The Animation has done away with the pesky need to press buttons and control movements and just lets you enjoy an extended uninterrupted story following Neptune and her friends. 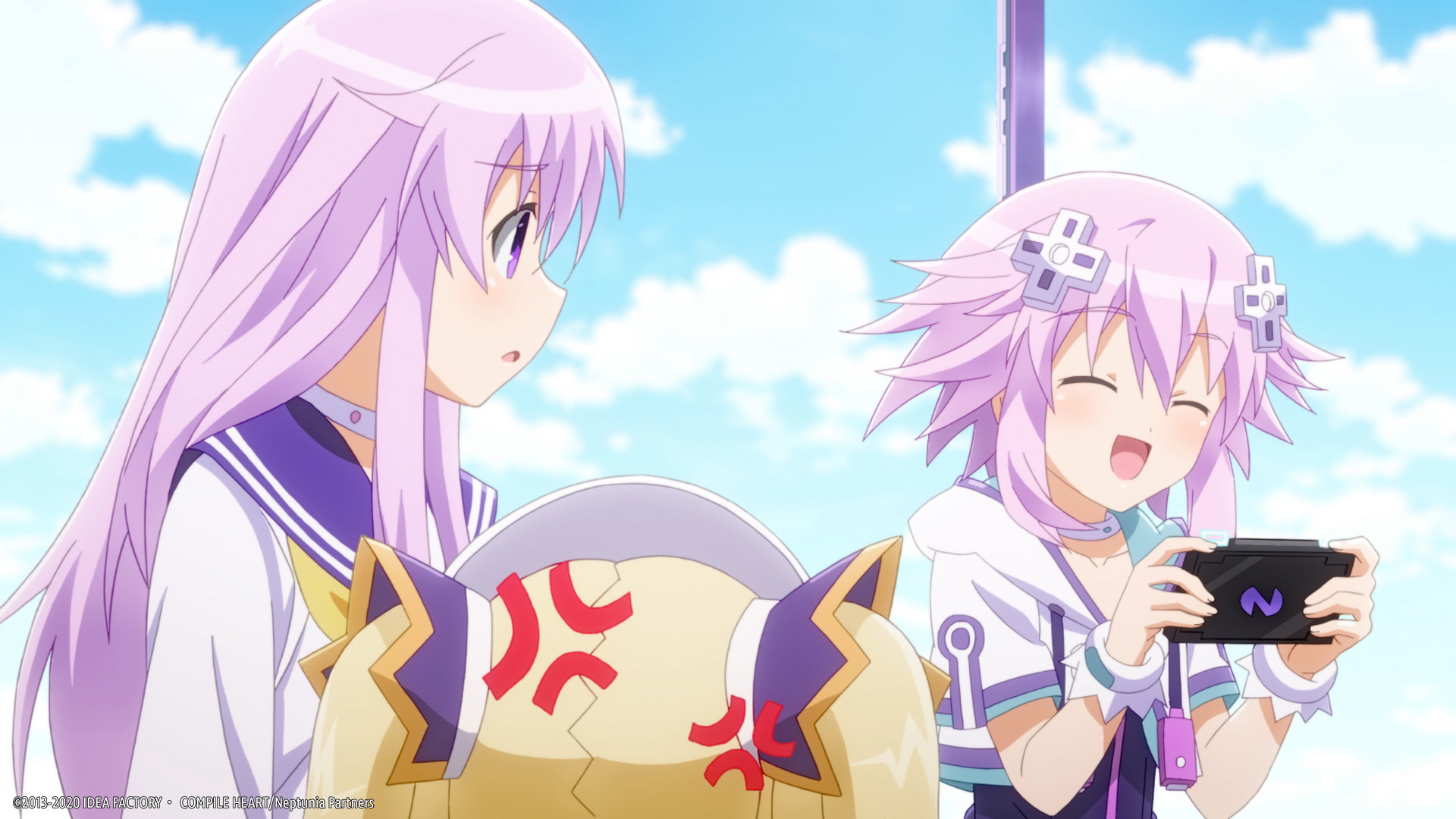 Originally the Animation was released as twelve loosely interconnected episodes and two additional self-contained episodes added later on. Idea Factory has taken these episodes and reordered them to tell two movie length stories plus one side story mostly involving Adult Neptune and the CPU Candidates. To keep the runtime manageable, they trimmed and completely removed some of the linking scenes as well as the opening and closing credits and comedic stingers. The format works for the most part although you can sometimes guess when a scene has been removed completely. These compilations of episodes are not a new concept, and it can be a bit hard to pull off unless the series was designed with that in mind but I think they managed to do a pretty decent job here. 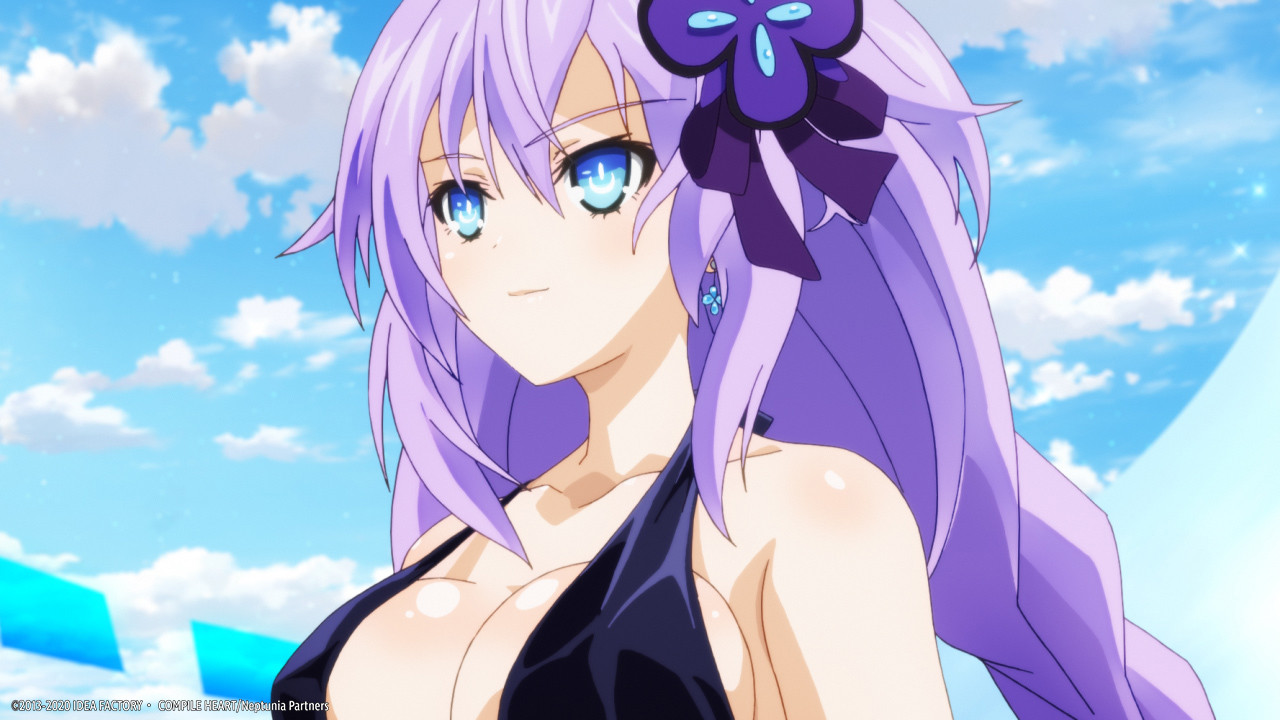 I can’t really go too much into the story because that would spoil it for those of you who are considering picking it up but I can tell you this. Despite the episodes being out of order and split into two separate movies, the story flows quite well. I would have liked the option to play them in order too, but it does work the way it is. You can kind of feel that you are missing something when you watch the first set which jumps episodes 6 through 10 and rolls episode 5 into episode 11 and then 12 but although that may sound a bit odd, like I said, it still works out okay that way. You get to see what you missed and the true ending of the series when you watch the other highlights compilation. 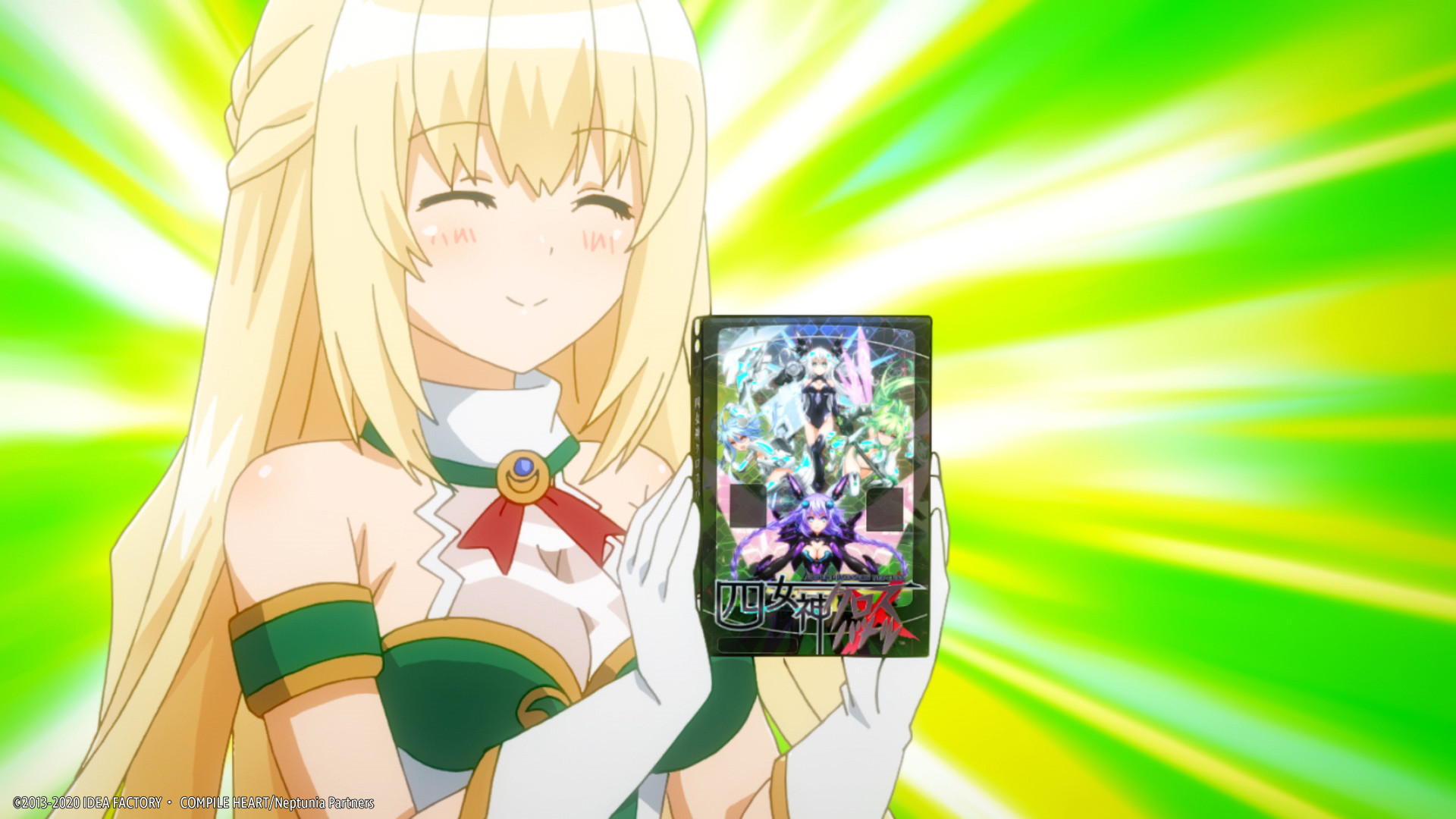 Is This Just a Game to You?

The story is related to the earlier Neptunia games for the most part which makes sense since the anime was originally made back in that era. Characters and storylines are shared although the anime takes some creative licensing with the delivery. Are you better off playing the games instead of watching the animation? That’s a hard question. The early games are classics although admittedly I have never played the true original game I did play the Re;Birth version that was released to Steam which was basically the original game remade using the third game’s engine and heavily changed. If I ever get my hands the Hypercollection for the Playstation 3 I will certainly be happy as I will get to experience the first Hyperdimension Neptunia game in its original form. I had ordered it at one point on Amazon but the seller cancelled the order and I have never seen it for sale since. Ultimately, I would say Hyperdimension Neptunia: The Animation can be enjoyed by both those who want a trip down memory lane of games gone by and by those who want to get a feel for Gamindustri, the Goddesses, their friends and enemies before playing one of the newer titles. The Animation does seem to require a little bit of knowledge of the game series as it offers very little in the way of character or universe buildings outside of a very brief introduction. That really shouldn’t be enough to stop people from understanding what is going on though. 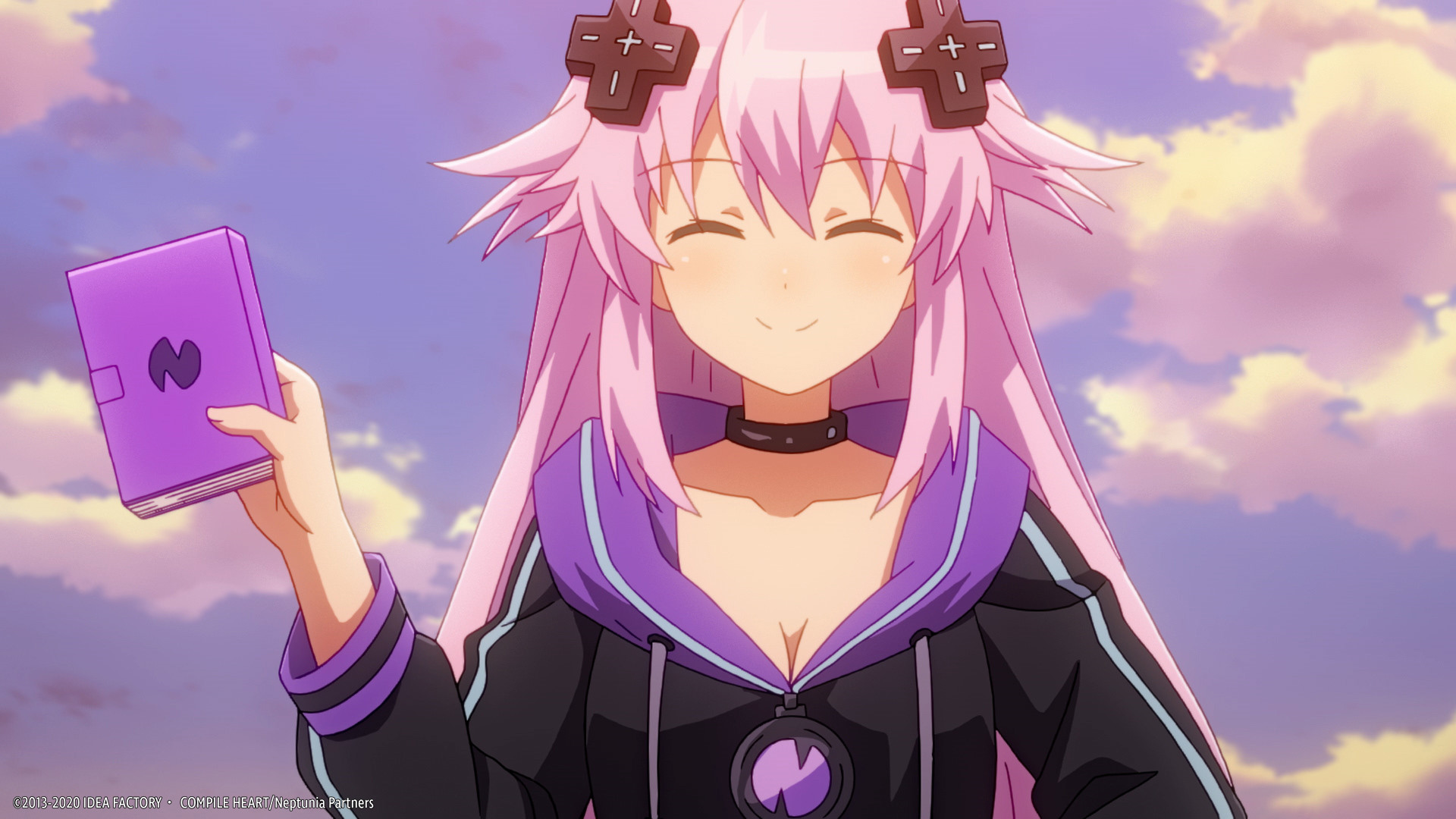 The animation is well done and it was great seeing the characters fully animated at all times rather than as semi-animated stills on the screen with the occasional animated action sequence. There is a good use of colour and while everything has a kind of muted pastel tone to it there are enough more vivid tones to really highlight what is important in the scene. The more action filled scenes and battle sequences are fun to watch and due to the condensed nature of the highlights complications they tend to come fairly quickly. 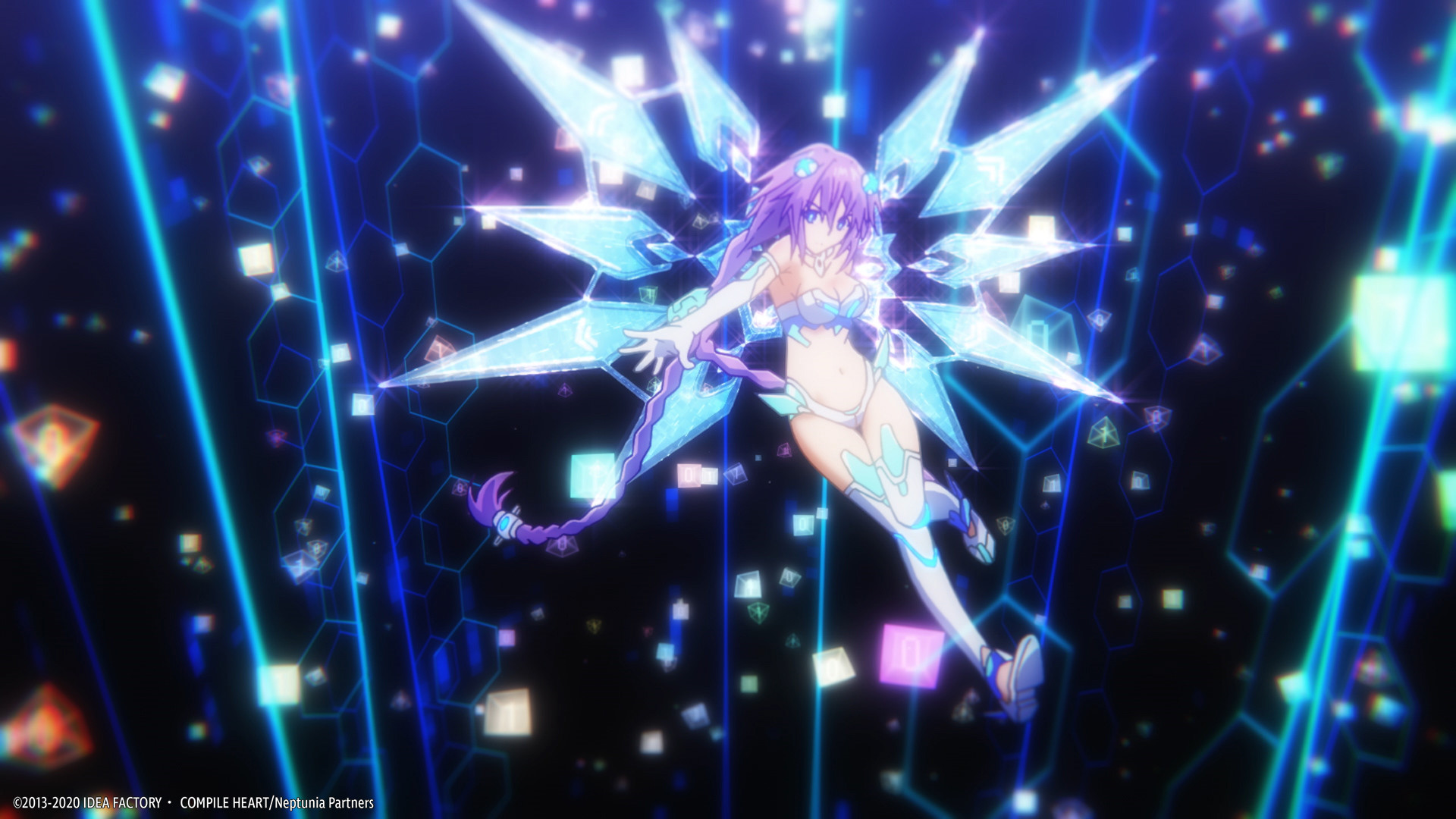 Common enemies in the game appear in the Animation as well. They seem to have a few extra moves in their repertoire in the animation though due to a combination of the creative license the anime format affords plus limitations that the game imposes. With the animation allowing for more story depiction than the standard text on screen visual novel style delivery, it leaves me hoping that the next major Neptunia game will offer even more animated cutscenes intermixed with the traditional delivery. The original Megadimension VII is still one of my favourite Neptunia games and I look forward to trying Megadimension VIIR in proper Virtual Reality if I ever get my hands on a headset. 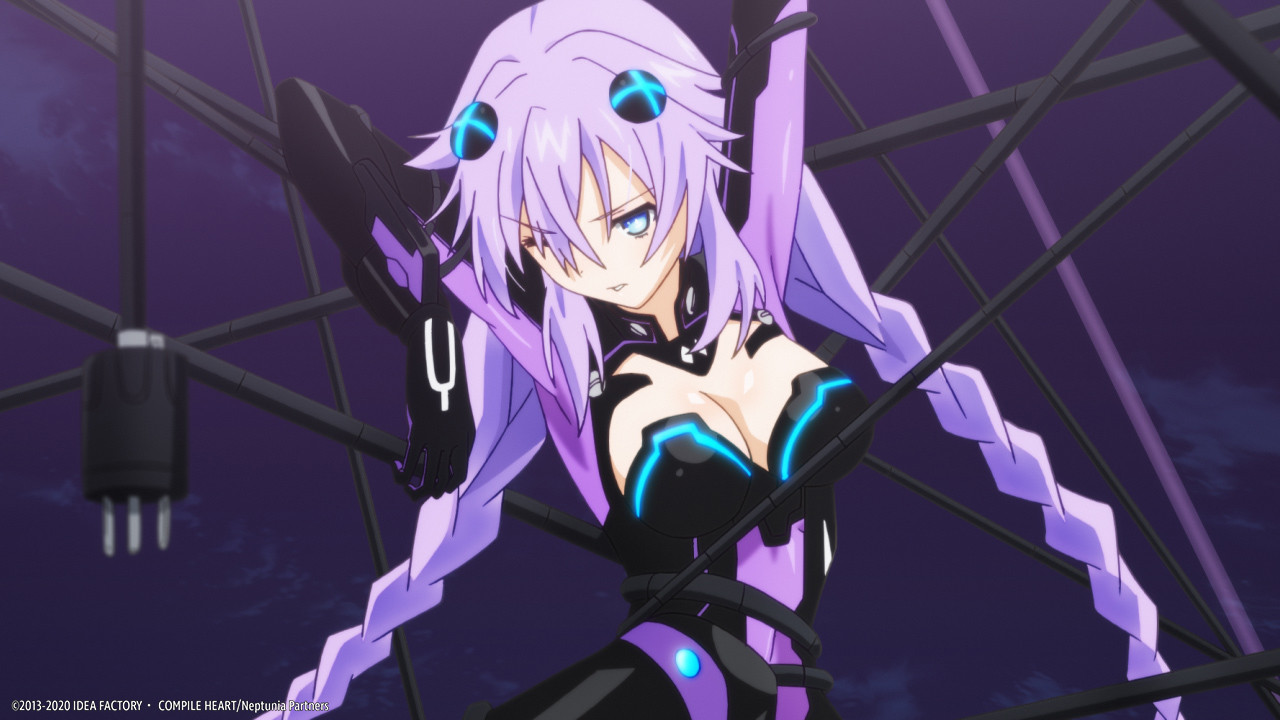 Bit of an odd thing happens here, it could be because of licensing issues but despite it already existing, there isn’t a spoken English option. There are English subtitles available of course, so you are able to follow along with what the characters are saying that way, but it does defocus you from the action a bit. I found myself having to skip back a few times when the text was streaming too fast for me to keep up or if I found myself staring at the bottom of the screen too much rather than the actual animation. What I can tell you about the audio though it is it features very familiar sounding voices for those of you have played the Neptunia games with the Japanese language track before. There are also familiar sound effects which helps reinforce it being Hyperdimention Neptunia and not yet just another anime. The music intermixed into the story really contributes to making the action sequences feel a little more epic even though I don’t actually get to participate in them this time. 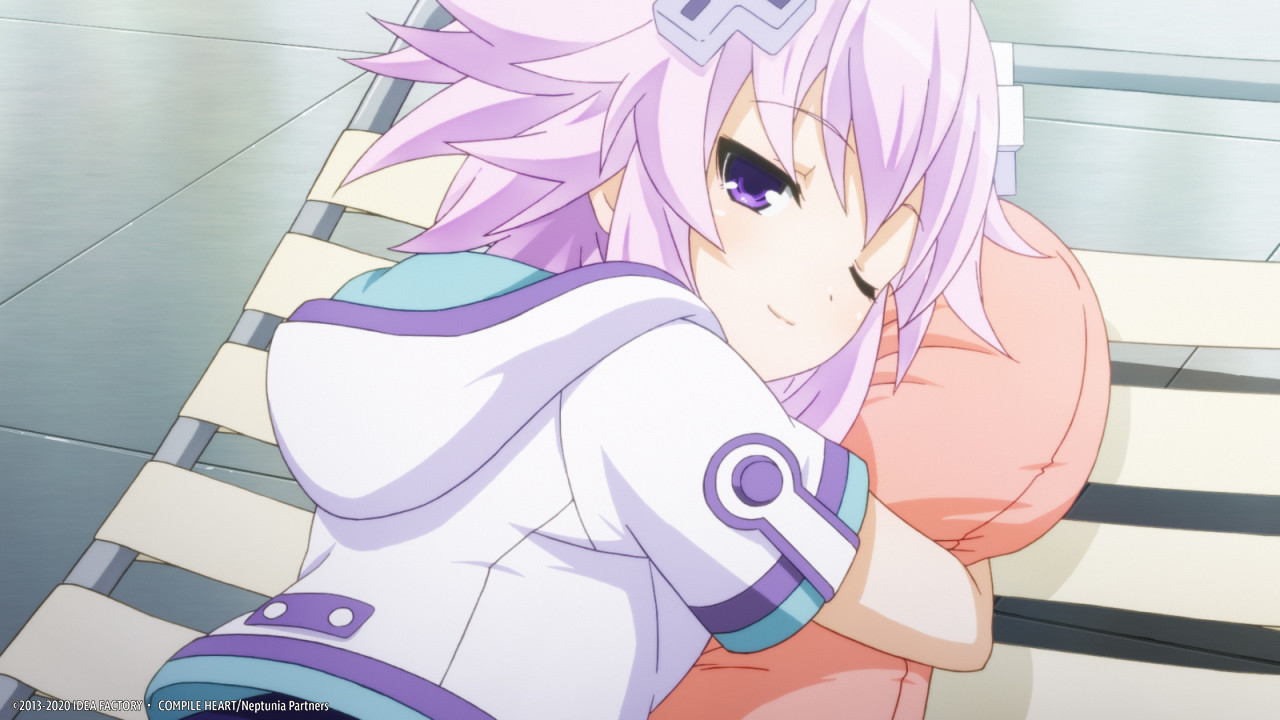 Here we will talk about something that isn’t directly related to the Hyperdimension Neptunia Animation itself and more about the delivery. It’s streamed, which means that you don’t get download it to your machine and you must have an active Internet connection to view it. It can actually be a bit hard to find too depending on how you have your library sorted due to it not being installed. I found I had to type the name of it in each time I wanted to resume it just because it tended to hide. 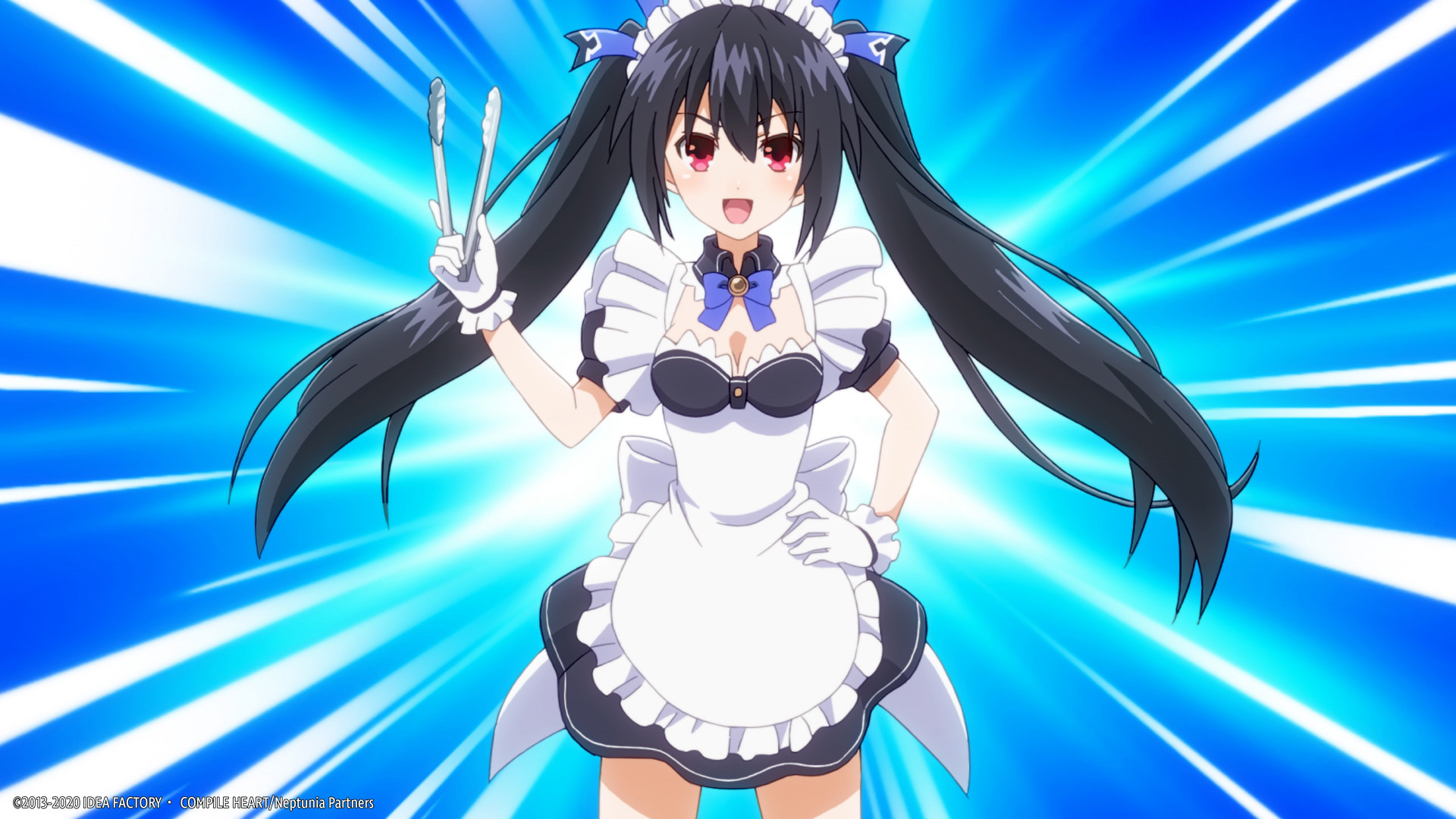 It plays in a browser window rather than Steam itself. It makes it so it looks like you have no “playtime” so it’s quite likely we won’t see any reviews on Steam itself for that reason. It also means that you have to be logged into your browser for it to play so those of you who refuse to use anything other than the Steam Client to access the Steam Store/Community will not be able to easily view it without compromises being made. Once it is in the browser it works fine, you can even customize the subtitles to the colour and style of your choice which is quite nice. You can have the background removed behind the subtitles too if you find the subtitles getting lost too often (it happens quite a bit depending on the colour you chose). The standard controls are all there for play, pause, skip forward/back and the general progress bar you can use to jump to any point you want. The player also tends to remember where you left off so you shouldn’t need to spend time searching for where you left off if you don’t watch it all in one sitting. The one thing you can’t easily do, and it does sort of make sense as other streaming platforms often do the same, is that you can’t take screenshots. As soon as you try, the screen turns black (although the subtitles remain). It’s a shame because it meant I couldn’t even attempt to make my own screencaps for this review which I really wanted to do this time because there were some pretty interesting shots I could have made. 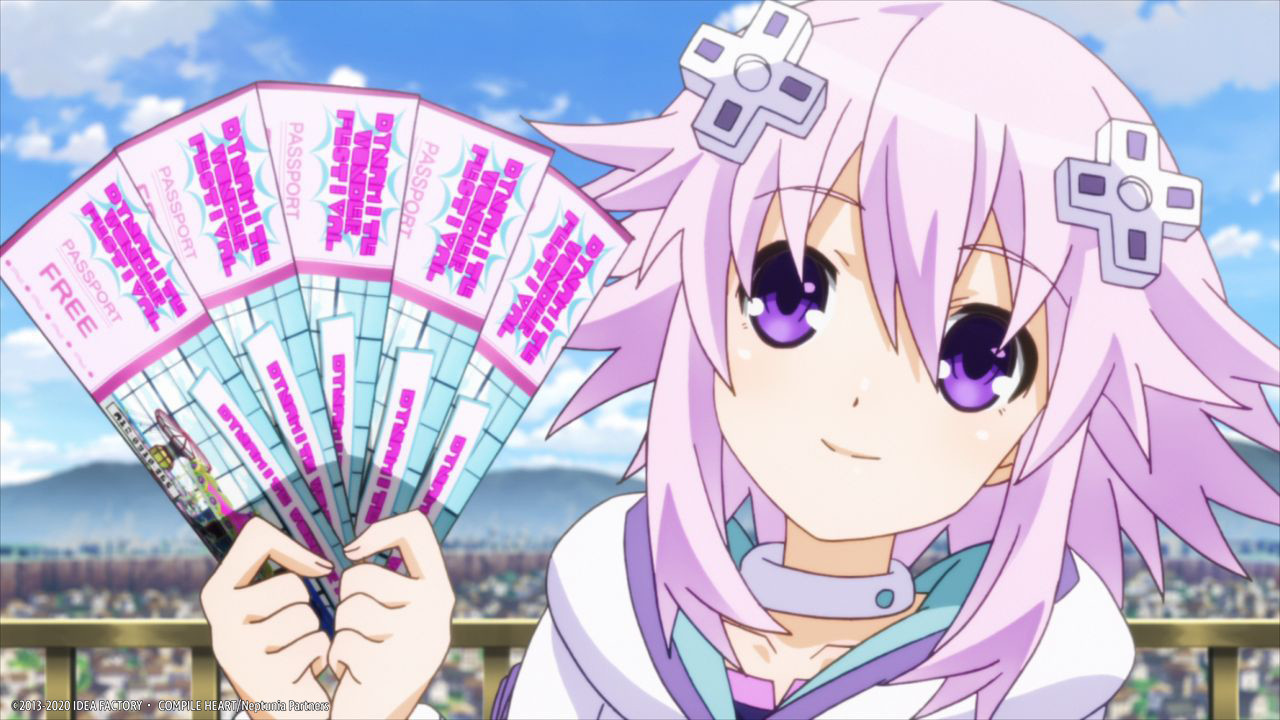 So, should you pick up Hyperdimension Neptunia: The Animation on Steam? If you are a fan of the Neptunia series and are having a hard time finding a copy of the Bluray not being sold by scalpers then this is the next best thing. Sure, it isn’t the definitive complete edition, and sure some of the scenes are missing which leads to the occasional bit of clunkiness between scene changes but overall, it is still a pretty fun visit to Gamindustri. It never advertised itself as the complete edition but more of a compilation of highlights (“Hi☆Light”) and that works fine. It’s abridged into a pair of feature length movies rather than a collection of episodes. If you would rather have the uncut version, then you will have to look elsewhere, but if you like the convenience of having a connected film version of your favourite Gamindustri Goddesses then you likely will enjoy this offering. It’s one I will Save for Later simply because I am finished it for now, but will likely revisit Gamindustri again in the future. I am also a little saddened that the adventure was a cut a little short with the abridging and that there was only one audio track available.