If only magic was real…

For anyone that read Harry Potter as they were growing up, I won’t be surprised if you wished that you could go to a magical school and have the ability to wield magic or be proficient in something like potions. I know I sure did (and still do). Though, there is still a factor that you wouldn’t be capable of performing magic in the first place in this situation. And let’s be honest, us hopefuls will probably land in that category. 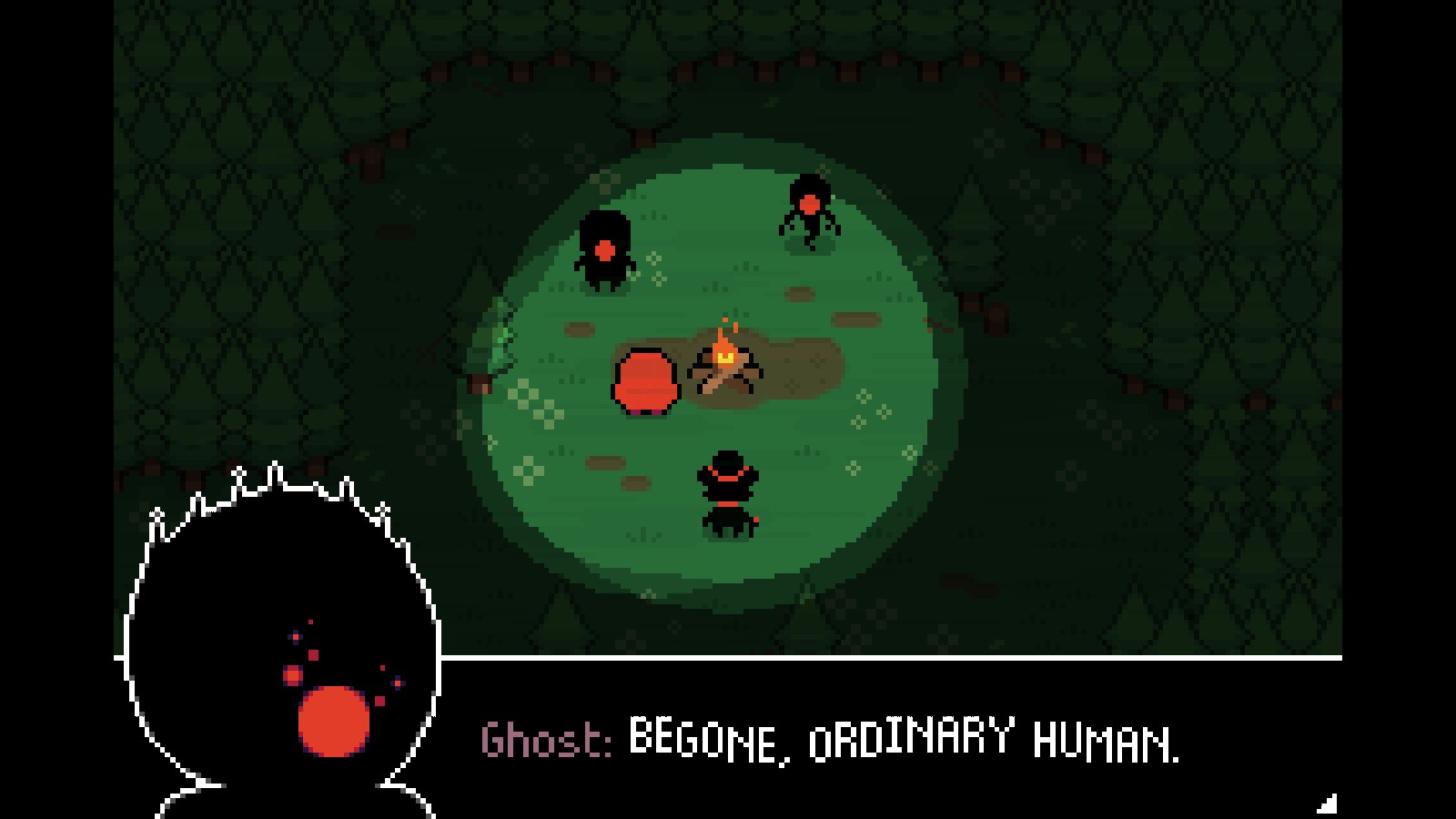 Ikenfell has you play as a teenage girl named Maritte who lives in a world where magic is a real thing. In fact, she’s heading to a magic school just as we join her. However, she isn’t going there as a student at the start of a new school year. Maritte is an Ordinary, or someone that can’t perform magic, and she’s traveling to Ikenfell to find her sister Safina, who is a witch there. Safina didn’t return home when she normally did and she was worried that something happened. On her way there, she learns that Ikenfell is in lockdown for some mysterious reason and suddenly develops her own magic as a pyromancer. Once you get into Ikenfell, the majority of this game is exploring the different areas of the school, finding out what happened to Safina and where she is, and working with and getting to know Safina’s friends (or those that just know her).

While you’re exploring Ikenfell, you’ll come across some puzzles that will block your progress until you solve them. Most of these are pretty basic and easy, even the ice sliding puzzle section. There was only one puzzle halfway-ish that was difficult to figure out, but once you realize the fireflies will point your way it’s smooth sailing from there. Enemies also roam the grounds and once they see you, they’ll try to engage in combat. You can try to dodge them, but sometimes you just can’t. 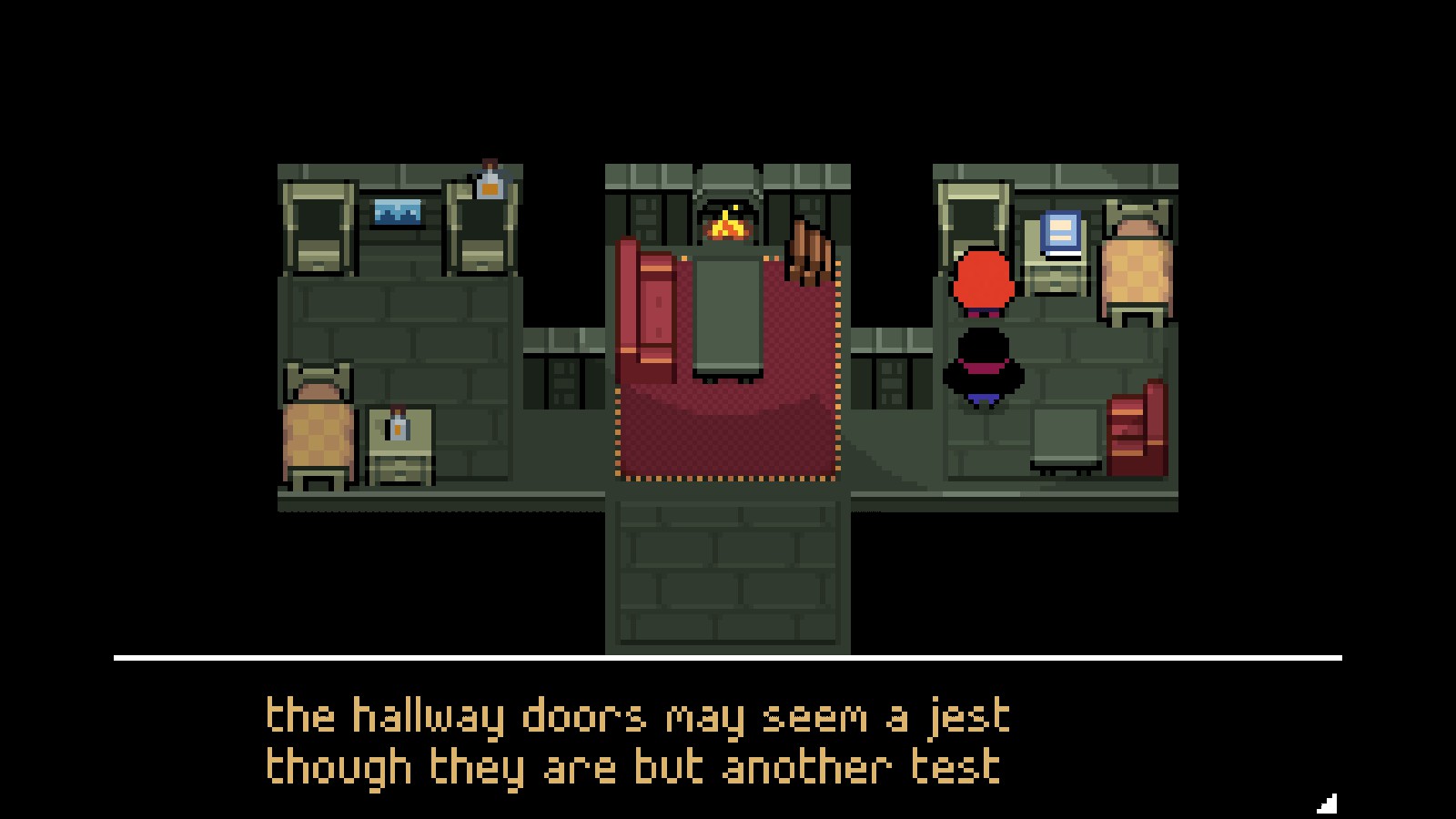 It’s combat time! Combat happens in its own little area that acts like a 12×3 grid with your team starting on one side with your enemies starting on the other. From here, it acts like a tactical turn-based game. Everyone on the grid has a certain amount of steps they can take and attacks have a certain range. Some attacks/buffs will just target a couple grids in a row or a column or two in front of the caster, or even mix it to where it can hit in a plus. While you won’t know the range until you click it to see what squares it highlights, movement isn’t locked in. Though, your teammates and enemies will block your way if you don’t think ahead about your positioning. Once you choose what to do, they’ll do a special animation where you have to time a button press to just as the indicator reaches your target. Depending on your score (from a totally missed “Oops” to a perfect “Great”) it will determine how much damage was dealt and if the status effect the attack may have takes effect. It’s the same with enemy attacks, except this time you time your press to just when the enemy’s attack would hit you to minimize damage.

I quite enjoyed battles. It was pretty fun and most of the attacks enemies will throw at you are easy to pick up on. Especially when enemies will roughly share the same animation if they share the same attack. It was also pretty weird not having MP or any weaknesses, but I don’t really mind at the end. After all, your teammates only have magic spells to attack with, there is a limitation put in place where some spells need a couple turns to recharge, and it allows you to have anyone you want on your team. No need to switch someone out or just struggle through if a current teammate is weak to the current enemies. You can choose your team based on their skills (and if you like their character in my case with Gilda) especially since unused teammates will still get EXP. 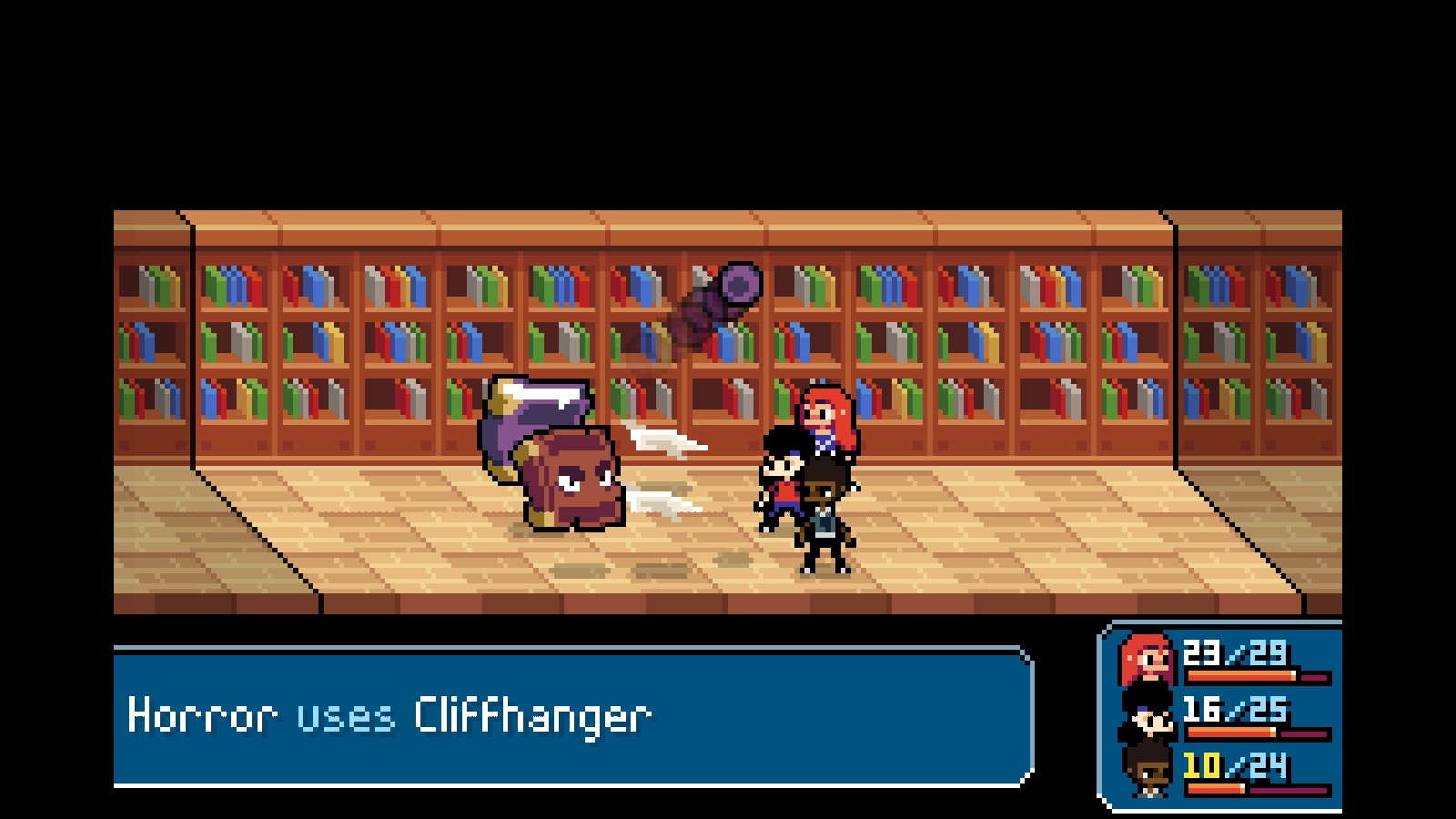 Though this grid system does have a problem with big enemies blocking the grids behind them so it looks like an enemy isn’t there or it looks like the enemy is on the square you’re aiming for when they’re not. And towards the end of the game, the boss battles do become longer due to the difficulty being raised with the help of multiple phases and the ability to summon a couple minions.

One question that I’m guessing some people are asking, and what I try to find out when browsing RPGs, is if Ikenfell requires you to do some grinding to continue. Well, as long as you are fighting enemies on the regular as you’re going through new areas, you don’t have to grind out levels. Unless, of course, you want to. You don’t even necessarily have to grind for money. Bosses, one of Rook’s abilities, and certain situations will give you a coin item that you can sell for a nice stack of coins so you can buy new equipment or healing/buffing items. 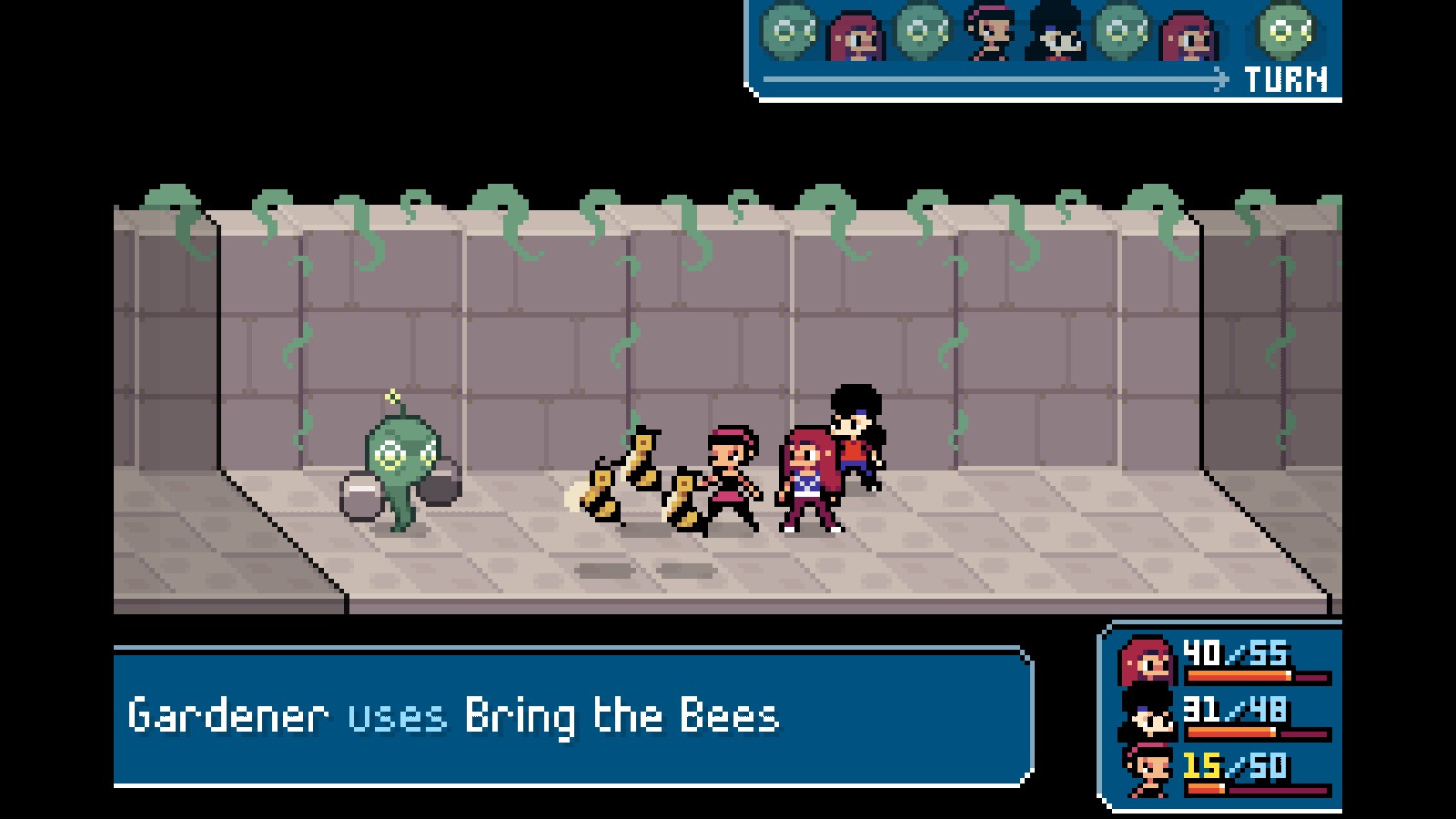 There are accessibility options for those that have a hard time with timing or just don’t want it to be a factor during battles. While manual timing is the default, you can switch to have it semi-automated where the default rating is a “Nice” leaving only a “Great” as a manual attempt, or have it fully automated if you would rather just have standard RPG battles. In addition, you can activate an automatic victory option. If this is on, you’ll have an additional option during battles that, when chosen, will end the battle right there. Your team members won’t lose any health, you still get the experience points, and the achievements that are associated with bosses will still unlock. I can see an argument here that it makes the combat system pointless, but at the same time this is completely optional even when it’s on, you can quickly complete battles if you’re going back into previous areas, will let you continue with the story if you come across a hard battle, or let you skip boss phases so you don’t have to spend the time it took you again. Personally, I mainly used this option when I was going through previous areas to find secrets and it was very helpful in that regard.

So does Ikenfell have extra content to do? Yep! While there are no side quests (or not what I’d call side quests), there are a decent amount of secret and optional stuff to do and find. There are chests that are hidden, sparkling spots indicating an item (which if you listen closely gives off a little twinkle sound), three kinds of gems to find that you can trade for special accessories, and five secret bosses. There isn’t a point of no return so you can go back and explore areas at any time. 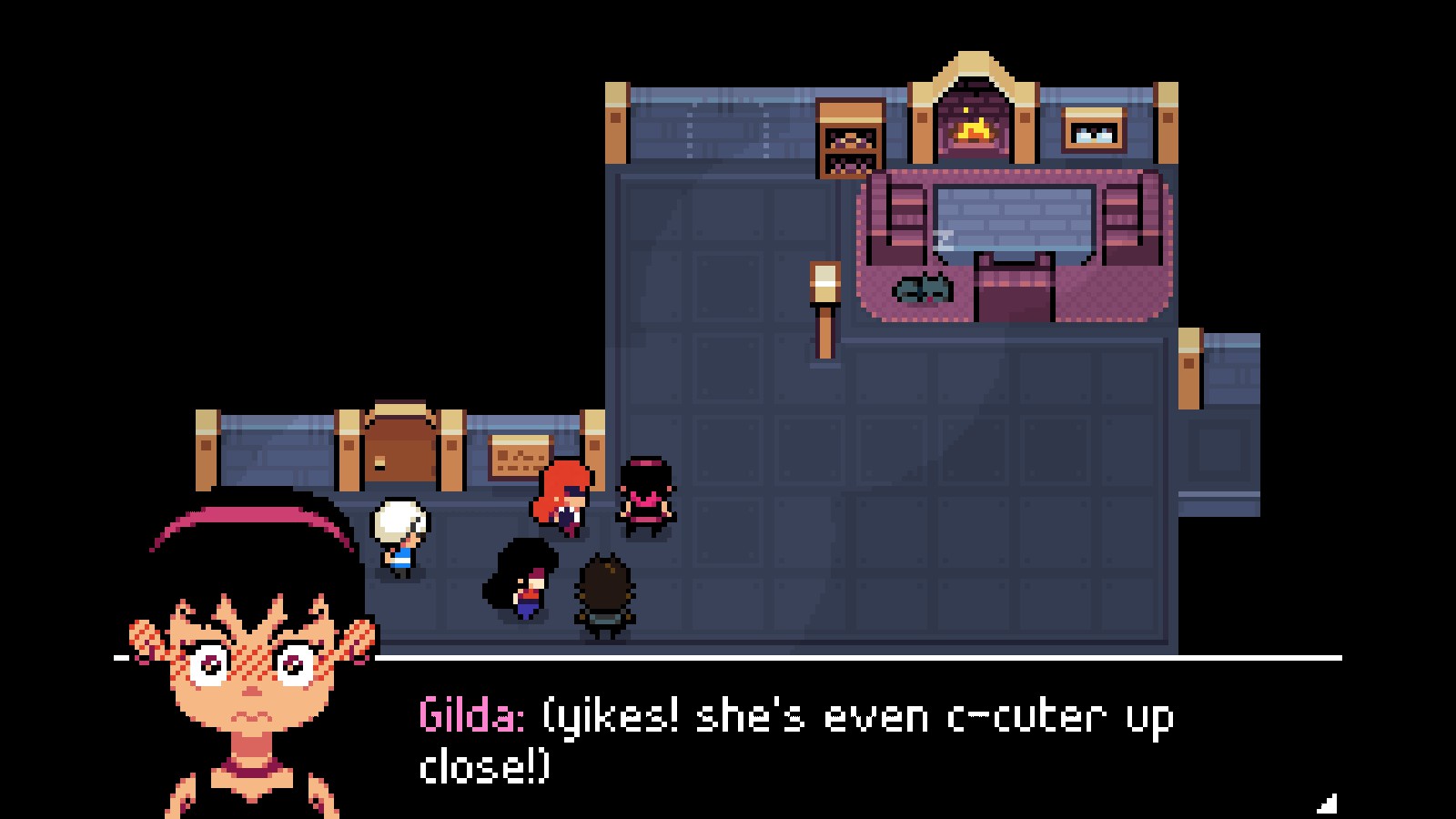 After 2 years of waiting and looking forward to Ikenfell, I have to admit I was a little scared that this would turn out to be a disappointment. Thankfully, my worries didn’t have any grounds and this turned out to be an amazing game. I’m a sucker for the writing style, I loved the characters and how they grew as you got to know more about them, the music definitely fits as it has a magical tone to it (which isn’t surprising since I learned the composers worked on Steven Universe), and it has a fun tactical timing combat system. If you don’t mind the pixel graphics, I recommend picking this one up.