Fancy a change of pace from all that running and gunning? Paint with nature with this relaxing puzzler.

In Cloud Gardens players must harness the power of nature to overgrow lo-fi scenes of urban decay and manufactured landscapes. By planting seeds in the right places, they’re able to create small overgrown dioramas of brutalism and beauty, salvaging and repurposing hundreds of discarded objects to create unique structures for nature to reclaim.

Players can dive into a relaxing sandbox mode with no goals, where they are simply left to delight in their own creativity and create beautiful scenes, or take on a “campaign” of six chapters, where the task is to strike a balance between nature and the manufactured by covering each scene with salvaged objects and lush vegetation.

This is a chill game where the player is allowed to delight in their own creativity. The player’s task is to completely cover the scene in plants. As you overgrow the objects, a meter fills to show your progress. You are given objects to expand the scene. These objects contribute energy to the growing of plants, but you will also have to cover them in foliage to complete the stage, striking a balance between nature and the manufactured.

Cloud Gardens is an interesting change of pace for dutch developer Thomas van den Berg. He’s probably better known as the creative force behind the Kingdom series of games. A fantastic collection of 2D side-scrolling strategy titles, set in a beautiful pixel art style medieval world. For this new project, he has leapt into the three-dimensional space with a rather more sedate setting. 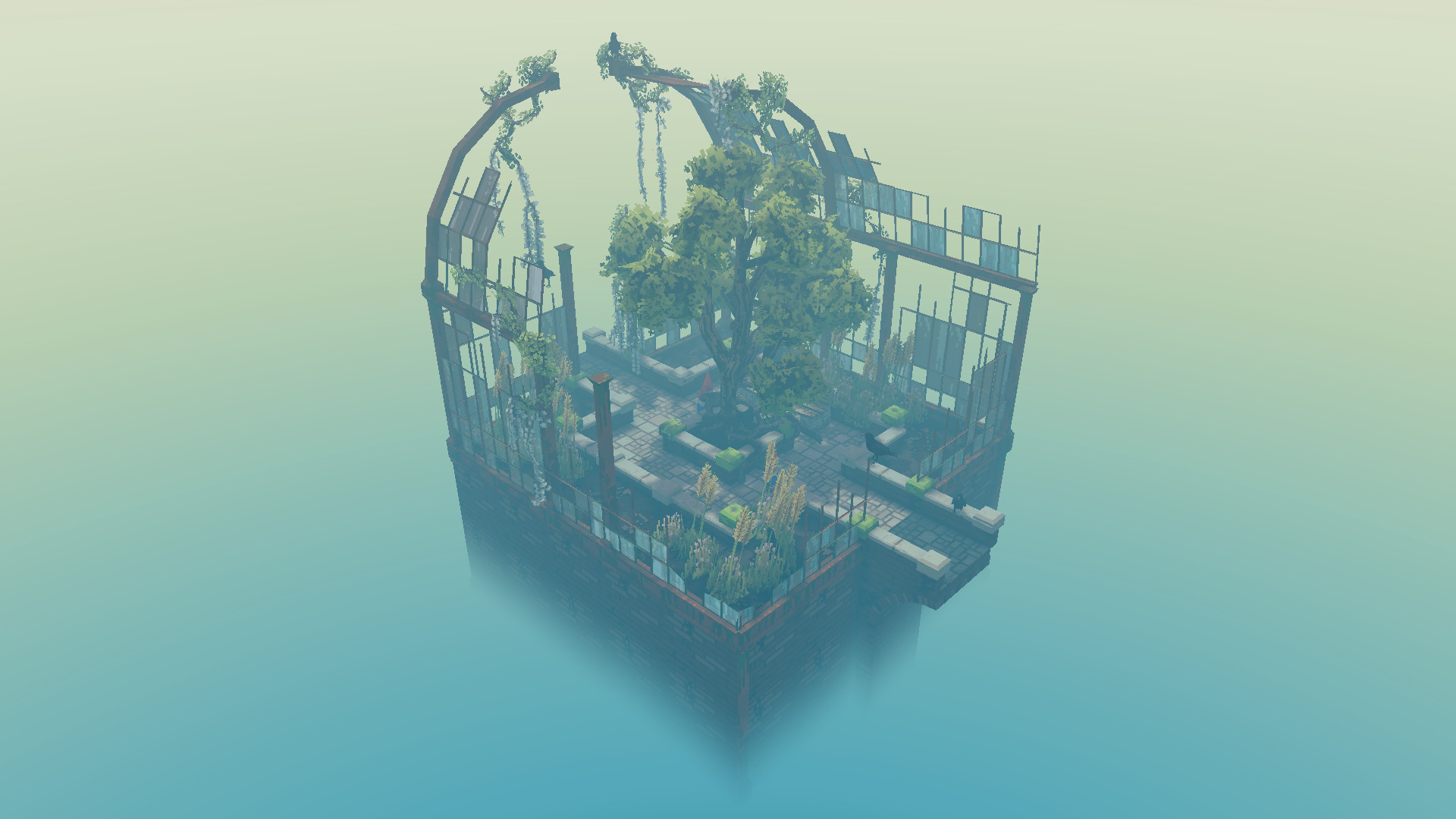 The playspace for want of a better description is a 3D diorama which initially shows a pocket of urban decay or post-apocalyptic scene. Your task as the player is to help nature reclaim this area by planting seeds. Thus bringing some beauty into these fractured desolate locations.

To “solve” each scene, you have to place your seeds in an appropriate spot for them to flourish and produce flowers. To encourage their growth, you then place random objects close to them. Each object has a radius of influence according to its size. The core gameplay plays out like a zen Tetris puzzle. The key strategy is to group both seeds and objects near to each other but not restrict the growth of tendrils or fledgeling branches and shoots.

As you progress through the “story mode” you unlock new varieties of seed with different characteristics. Vines are great for scaling vertical spaces such as traffic sign structures. Cacti are good for open areas and produce seeds at a fantastic rate. There are a couple more types of seed which don’t seem to mind where they are placed and expand at prodigious pace if unhindered.

To complete a scene you have to fill up a green meter icon by covering the level with an undocumented amount of greenery. I’d guesstimate it’s about 80% total coverage. Clicking on flowering plants allow you to germinate more seeds to add to the arena. You can switch plant types on the fly, to best cover the remaining barren spaces. All this is achieved with a very minimal user interface. This clean design aids the immersive effect of the game.

The content is broken up into various themes such as highways, rooftops and junkyards. Given the early access release, some of the later stages are still being created and no doubt will be added via a sequence of updates. That being said. There is still a sizable chunk of puzzles to solve. This is not an atypical speed run style game so you are free to take your time on all the levels. A welcome change of pace given these troubled times we live in currently.

If you want an even more relaxing experience then the sandbox lets you create a scene from a blank canvas. You are free to place any number of objects from the various themes into a custom scene and then decorate with seeds. These plants will immediately grow to their full potential. Giving your diorama a beautiful reclaimed look. The initial scene size can be selected at the start of the process along with various lighting setups which can be adjusted on the fly. There’s also a handy dandy undo button if you are not happy with certain object placement. 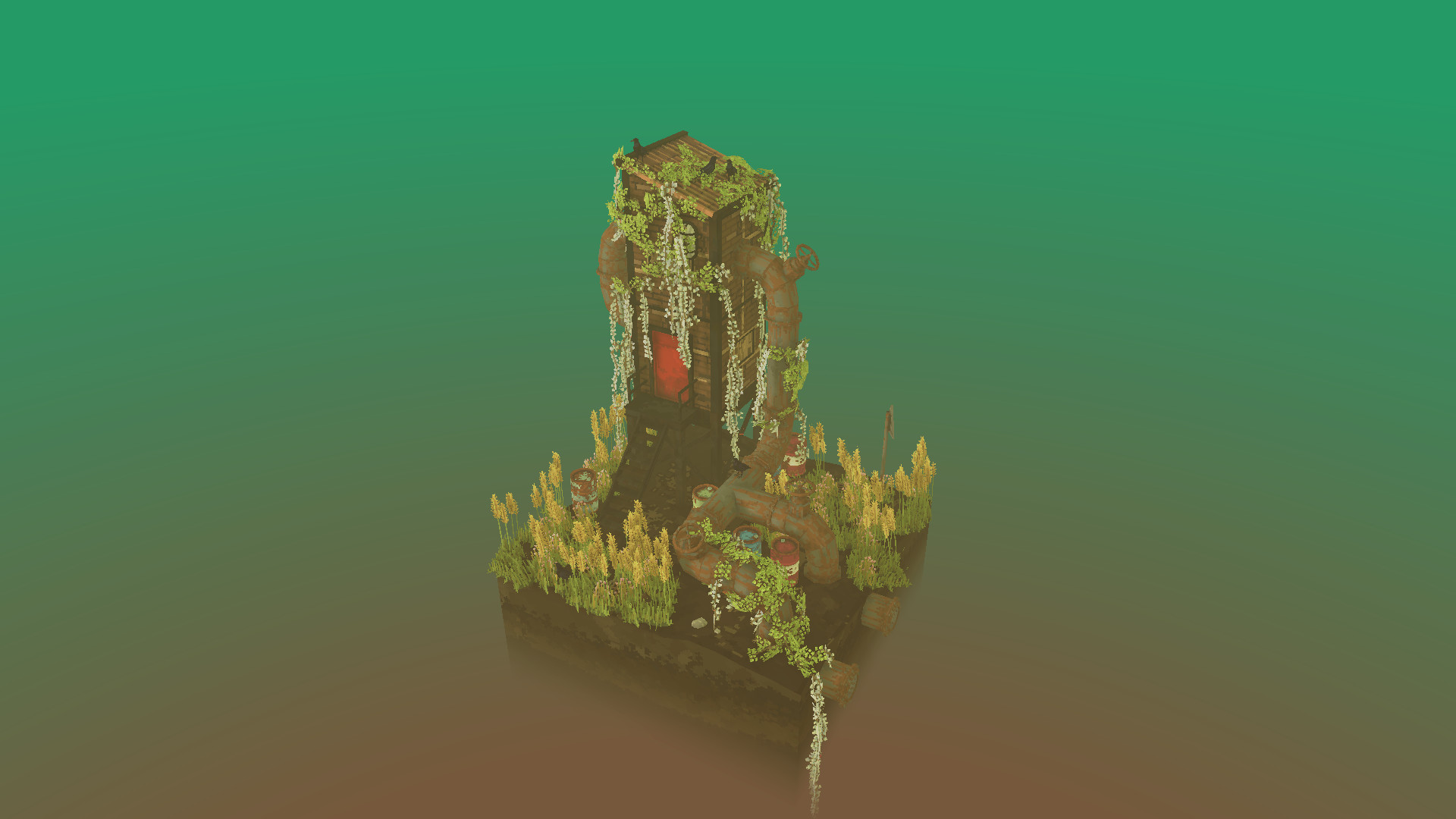 The pixel art that was a feature of the devs previous titles has made the seamless jump into 3D models. The low poly count doesn’t detract from the great use of the texturing. In fact, it adds to the overall charm of the visuals. Mundane objects like fridges and rubber ducks have been skillfully crafted to achieve a very unique look. This is a welcome contrast to the tidal ware of unity store assets flip projects currently abound on the steam store.

Beyond the basic visuals, the Unity physics system has been employed. This allows all the objects in the world to behave in a realistic fashion. Stacking items with wild abandonment will result in toppling pieces and unfortunate outcomes. The whole system is implemented in a subtle way. It’s not over the top with pieces bouncing around the scene like a cartoon from Warner Brothers. 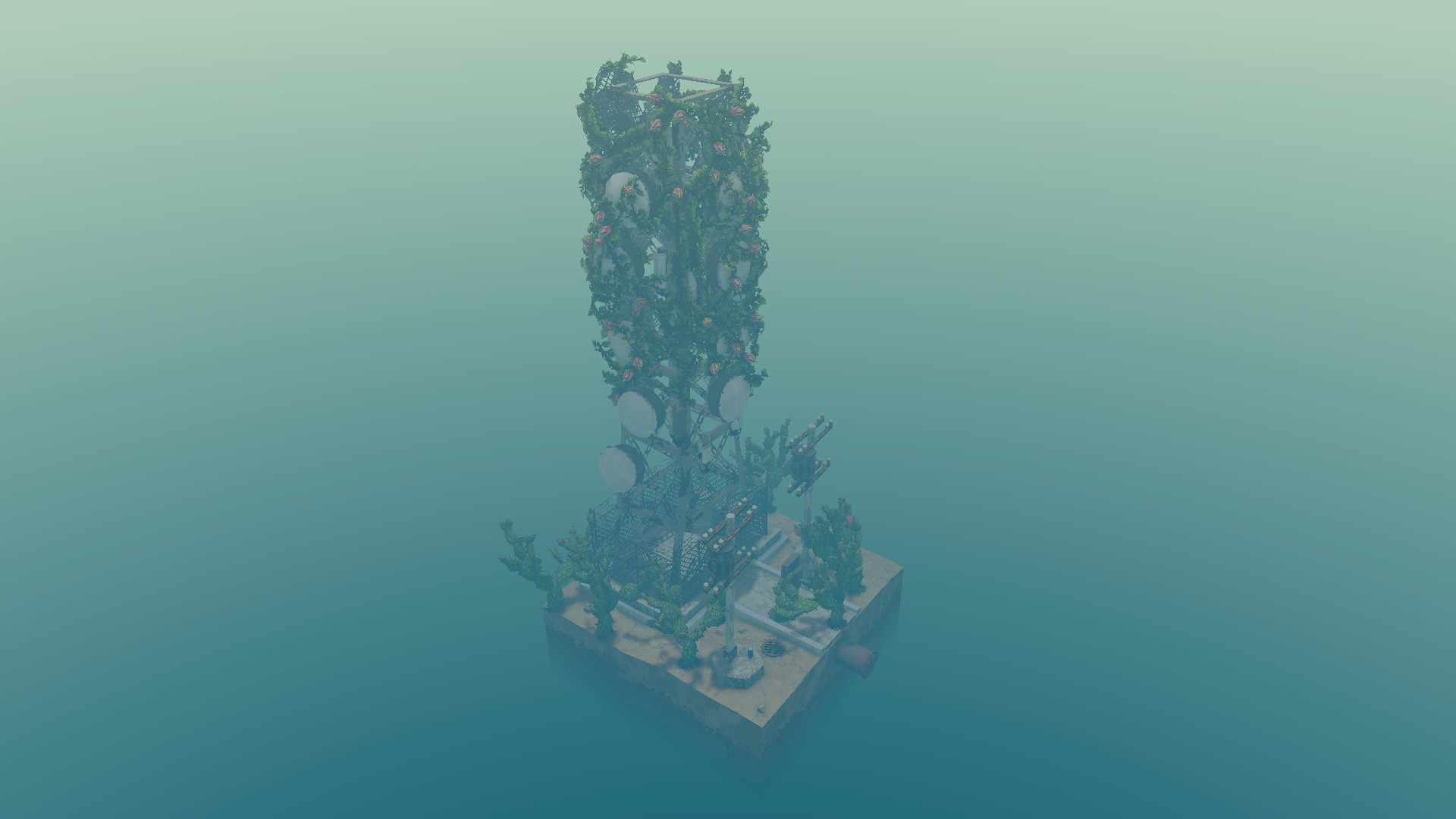 Given the zen-like premise. The accompanying soundtrack fits the aesthetic like a glove. It was created by Amos Roddy , who worked on the previous kingdom games. The soundtrack evolves as the player interacts with the scene. Spot effects and melodic motifs are used with good discipline. These consist of muted piano segments and treated chimes. Underpinning these musical phrases are field sample effects beds which give the whole shebang some solid cohesion. It’s an understated affair but really goes together well with the presented visuals.

Along with the atmospheric soundtrack, great care has been made to the spot effect samples as you place objects into the scene. Supermarkets trolley give a convincing ratte if you drop them onto a hard surface. White goods such as fridges and washing machines clunk with a reassuring heft that conveyors their heavy real world characteristics.. All these beautiful crafted elements give the game a believable sense of place. These are small details which elevate the experience to a higher level. 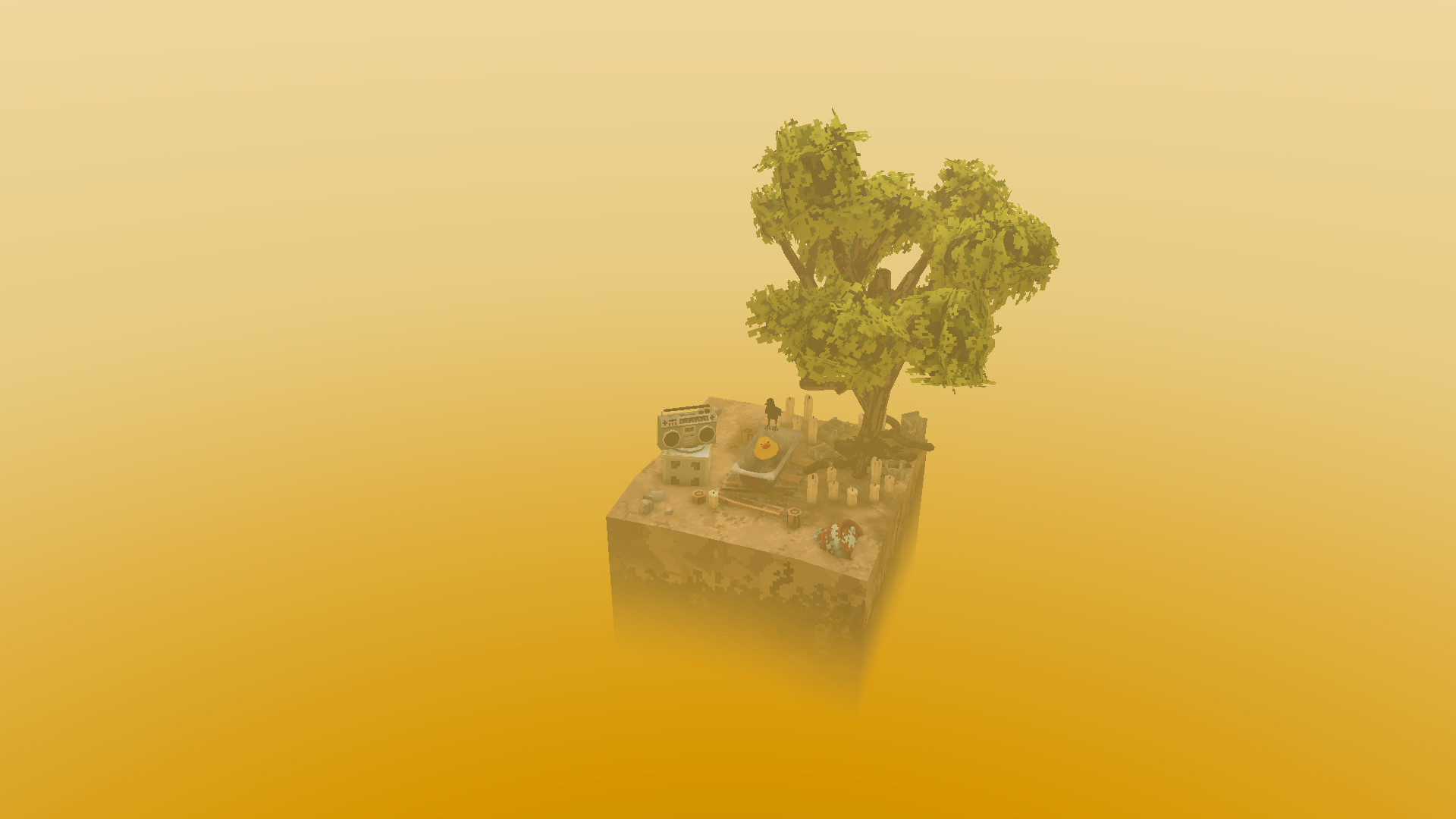 Even though this is an early access release. I feel there is enough content to warrant the current price tag. I have sunk roughly 6+ hours into the story mode and haven’t really dug into the sandbox beyond a quick playtest. The developer has announced the roadmap to the final release is going to be approximately three months. In that time the remaining themes will be added. They have also stated that they will modify the core game loop in response to player feedback, this might be an extensive rework or a tuning modification. This is a fantastically open process to game design. It illustrates flexibility, seldom found in the industry as a whole and should be applauded.

Cloud Gardens is a welcome respite to the current world situation. It’s a superb oasis of calm in these uncertain times we live in. If you are looking for a change of pace and want a zen-like meditative experience then I highly recommend you check it out