So close, but yet 6 enemies too far.

Meteorfall: Krumit’s Tale is a pretty unique deckbuilding game that I’m surprised I didn’t know about before. If I did, I totally would have picked it up, but I luckily did find out about it right before it went out from early access and onto a full release. This also happens to be the developer’s second game that is set in the same universe as their first, Meteorfall: Journeys. So what does this bring to the table? Well, for one it’s dungeon crawling, but without going to the dungeon. Or doing the crawling. The game opens up to you walking into a mysterious shop where you’re greeted with the owner named Krumit. For some reason, you’ve been summoned here and while what you’re working towards to defeat isn’t obvious, what is obvious is that you were brought here to defeat some enemies. 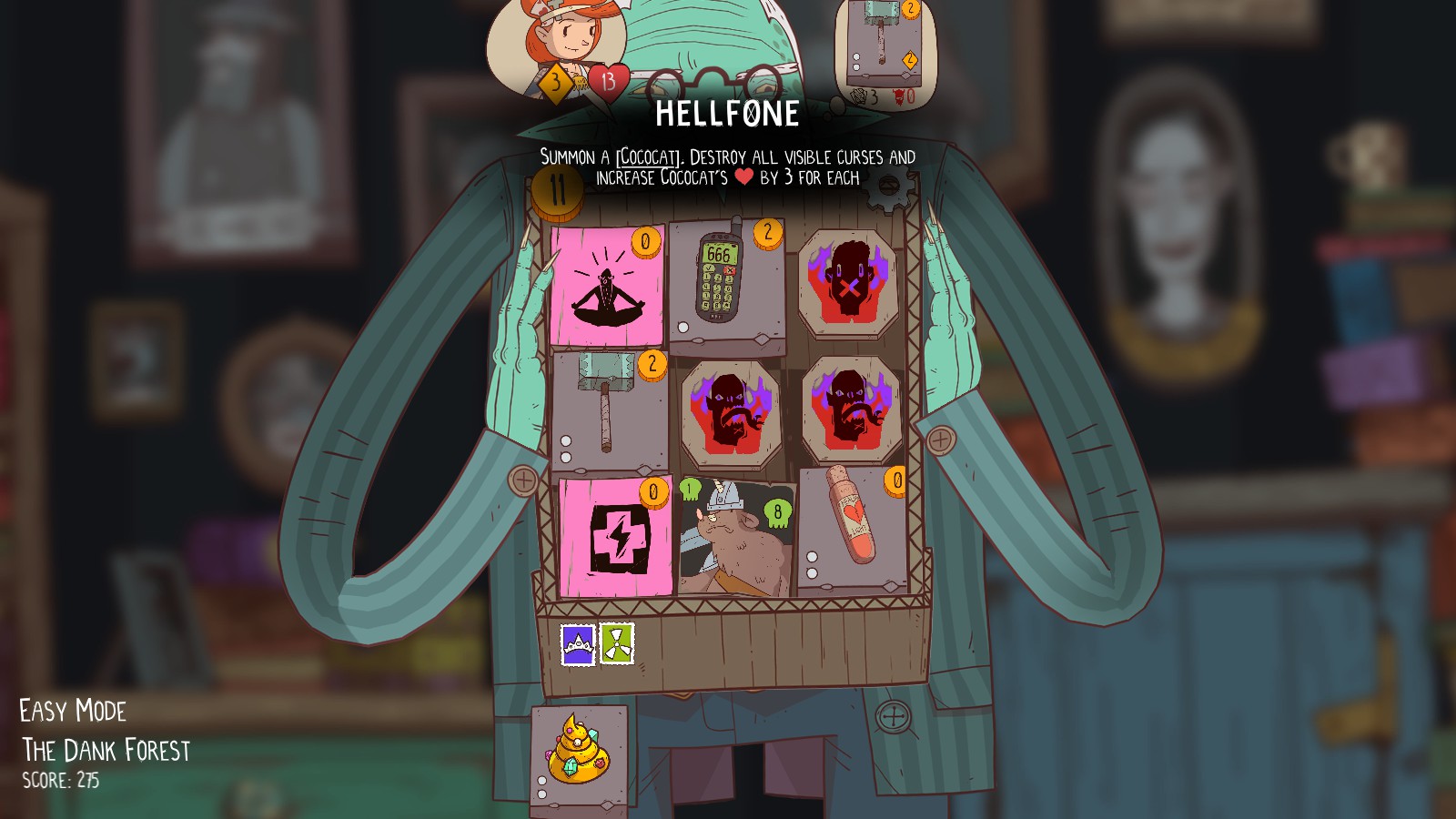 Once you decide to embark, instead of heading down into a dungeon where you’ll be moving between rooms to fight off multiple enemies, the dungeon is instead imagined as a 3×3 box that Krumit is holding up. Not to mention that cards are replaced by tiles. After he rips off the lid, your deck (which is filled with weapons, armor, abilities, and potions) is mixed with the enemy tiles and falls down. The rest of the deck is set aside, with Krumit telling you how many tiles from each deck is left and the next tile that’ll be drawn. Whenever a tile is removed, the column falls to make room for the next tile to fall down. From here on, you’ll be trying to think up a strategy that will let you survive. For your tiles, most of them will cost you some coins and you have a hand limit of four. Though, you can choose to discard a tile on the board in exchange for a coin and two health in cases where an enemy almost destroyed you. Every tile also has its own durability, indicated by dots or the description of what it does, and once they’re out it’s destroyed. 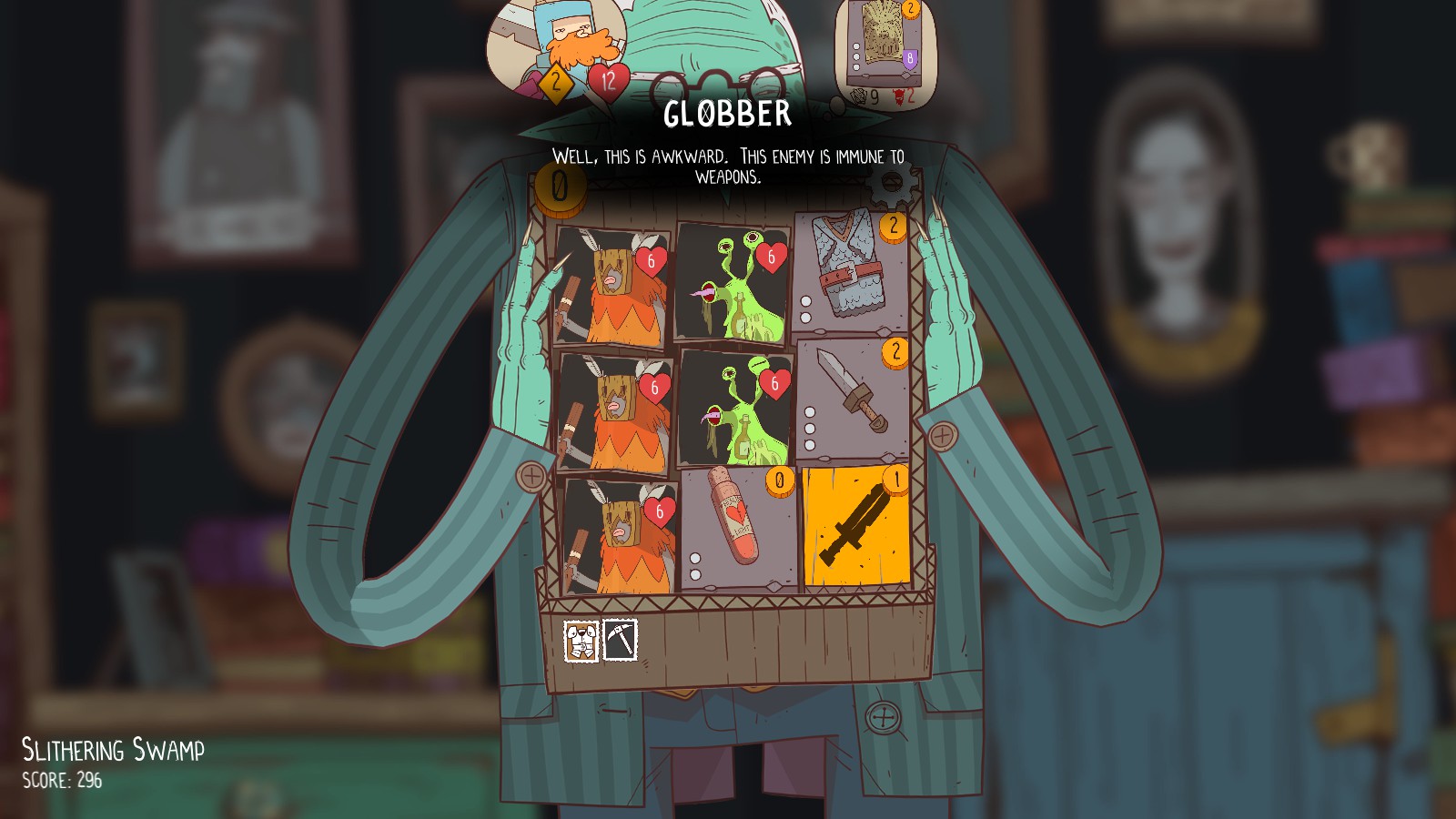 Once you’re ready to fight some enemies, all you have to do is hover to see if they have any special effects/power and click. Before you commit, you can see their first attack and their attack pattern so you can decide if you can reasonably defeat them. Once you do, you can attack with your base attack power, play a tile you can instantly use, or equip a weapon to get more attack power or armor to gain some block for that turn. There are some additional effects that will come into play as well, like completely blocking an enemy will stun them or blitz which will let whoever using it to attack first. You can also flee from battle, but the enemy will do their turn before your character flees. TO be successful, you’ll need to have a good balance of being able to destroy enemies, keeping your health in check, and having enough tiles to draw power from long enough to defeat every enemy. Once all enemies are defeated, the dungeon is complete and all unused tiles are converted into gems.

Though, there is one more layer of strategy you need to take account. The 3×3 box isn’t just for looks as tile placement is important. Some perks, abilities, and weapons take into account of what position they’re at or where they’re being used. For example, some weapons will only affect a certain row or will hit adjacent enemies in addition to the one you targeted. 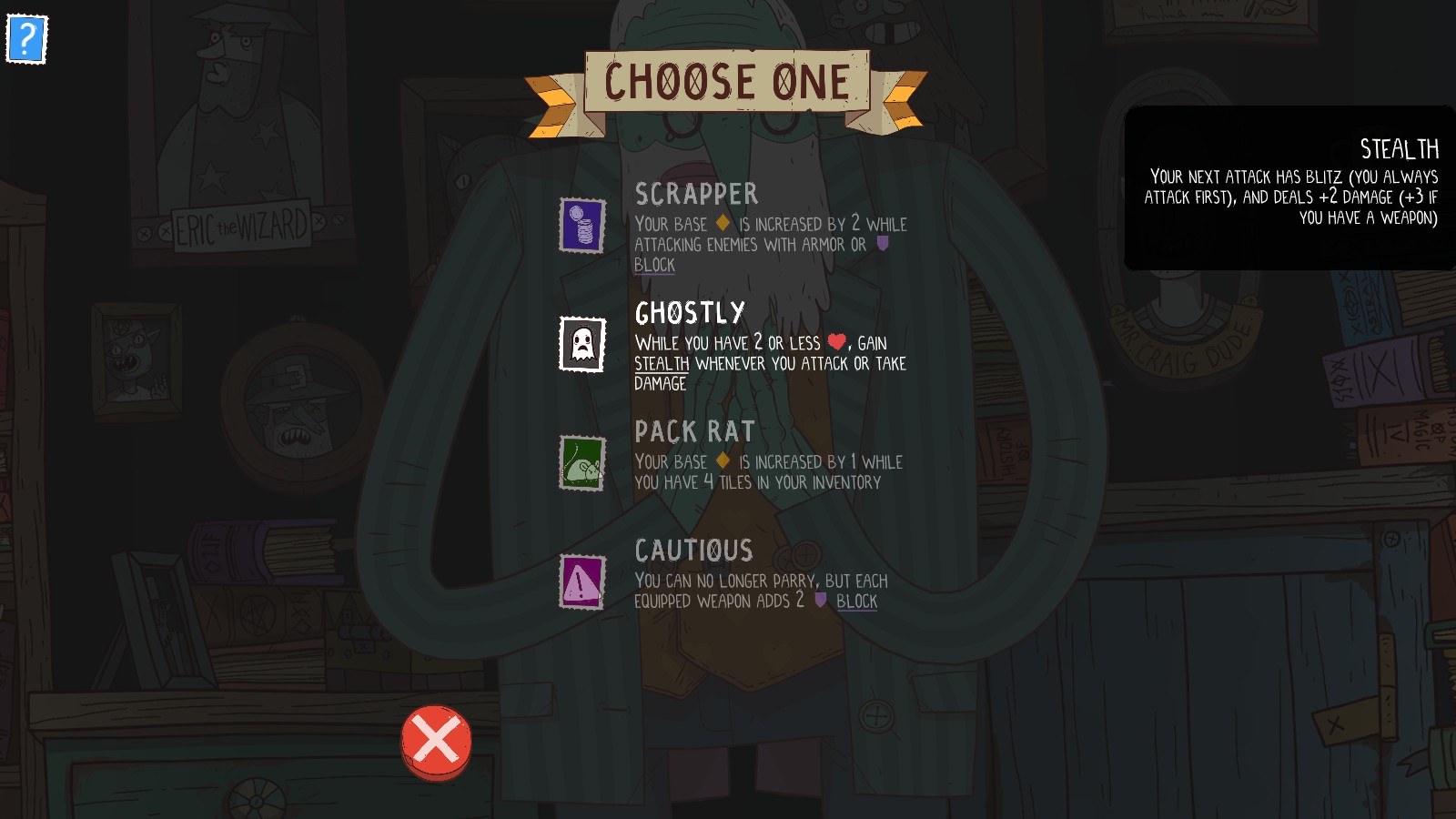 After each dungeon, you have to choose a new tile to take on, though you can easily sell it, and a new perk, which is permanent so choose well. It’s best to choose a perk that goes with how you’re playing, like if you normally fill your hand choose the perk that lets you benefit from it, but otherwise you’ll need to work it into your strategy. If it’s a perk you can’t really ignore (like you can with the full hand perk), it’s going to cause your downfall if you don’t adapt. Afterwards, you’ll be able to clean out your deck and buy some tiles with the gems you earned. In addition, you’ll be able to see what enemies and how many of them will show up in the next dungeon. As you get more dungeons under you’re belt, more enemies will be chilling in dungeons, with some even featuring a boss. 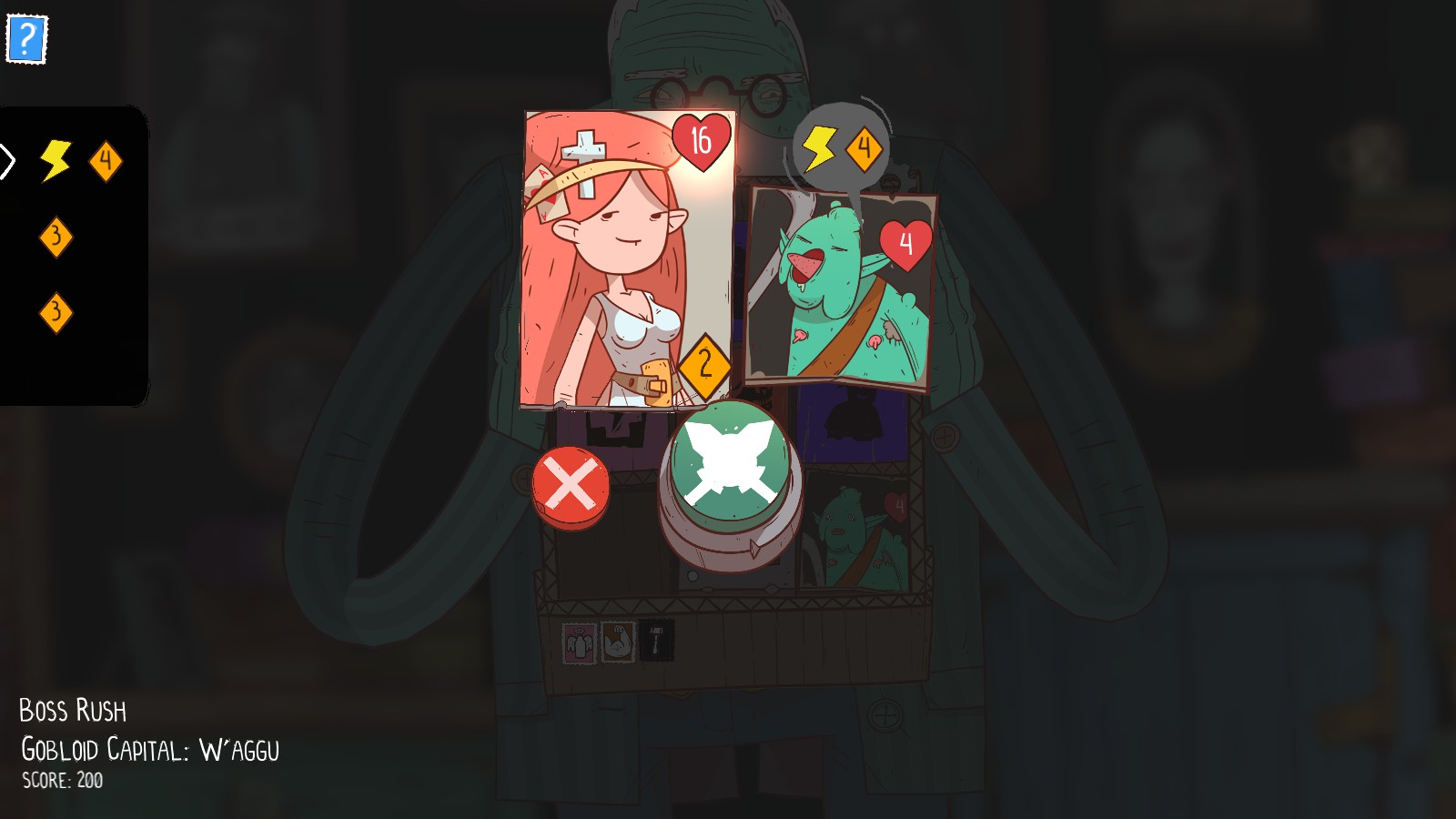 There are five characters you can play with each having vastly different play styles with their own sets of tiles, their own starting perk, and a different starting deck to go with them. There’s Bruno, the basic of basics, which comes with a perk of restoring two health whenever you acquire an item that grants block. He focuses on being a warrior with his deck focusing on weapons and armor, but isn’t that specialized in piercing damage. There’s Greybeard who is a bit of an arsonist with a starting ability to dealing piercing damage to the topmost enemy when acquiring an ability, specializes in doing damage without going into battle, and is the only hero that can burn or freeze enemies (at least, without taking on a perk beforehand). Mischief is next and as per her name, she is a mischievous thief. She has the lowest base attack than the others, but she gains stealth when attacking an enemy that is alone in their row (brings her up to a blitz 3 attack, but only for that turn). For her, positioning tiles so enemies are isolated is important to survival and fleeing battle is a valuable tactic so she can regain stealth. Her items also take into account of whether you have blitz/stealth, what position enemies are in, poisoning enemies, and a dash of piercing. Next, there is Muldorf, which is particularly interesting as his whole thing is being a necromancer. Every enemy he defeats will spawn a tombstone which you can lose health to summon a minion to fight for you or discard it to gain health (since discarding regular tiles won’t for him). As Muldorf focuses on minions and health management, his deck focuses on playing with health, strengthening minions, and a pinch of messing with the tombstones. Lastly Rose, my personal favorite, is all about switching between two perks. She starts out as the Chosen, which can replace up to 3 Curses (tiles that give you a disadvantage) with Blessings (which gives you some kind of advantage) when you overheal; but changing into Queen will apply three corruption on your first attack. Corruption will heal you equal to the level the enemy had, but it will leave a Curse. Rose’s deck plays with both of her sides as well as her being mostly holy. 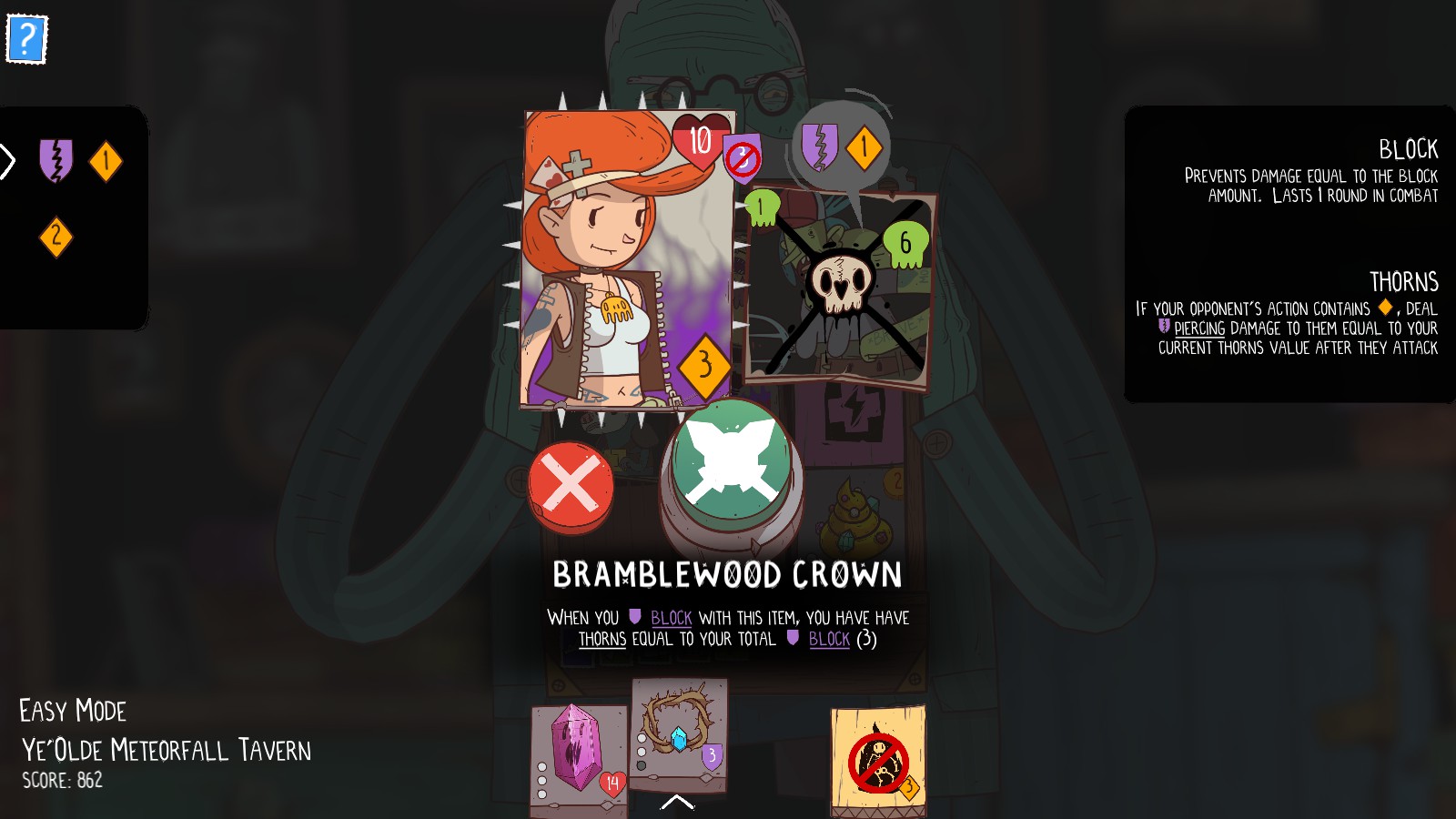 Of course, these characters are not unlocked right away, as you first start with Bruno. Though, a huge plus is that it doesn’t take that long to unlock everyone. You only need to bring up the most recently unlocked character to level three to unlock the next. This easily gets met with two or three runs that you would have done anyway to learn how the character works and if the play style is for you.

Other than the normal run, there are Mutation Modes that you can choose from to mix things up. Archmage is a Greybeard only mode where you’re limited to three tile types; Boss Rush, which is self-explanatory; Dungeon Crawler where you’ll start with random tiles and trade having a deck for having enemies dropping tiles upon death; and an Easy Mode if you’re having trouble by just raising your health and attack. Though, Easy Mode doesn’t mean you can slack off as the later dungeons will get do you in if you’re not careful and achievements are disabled.

In addition, you can do the daily run which will challenge you to complete the run with a random character and set mutations better than everyone else. 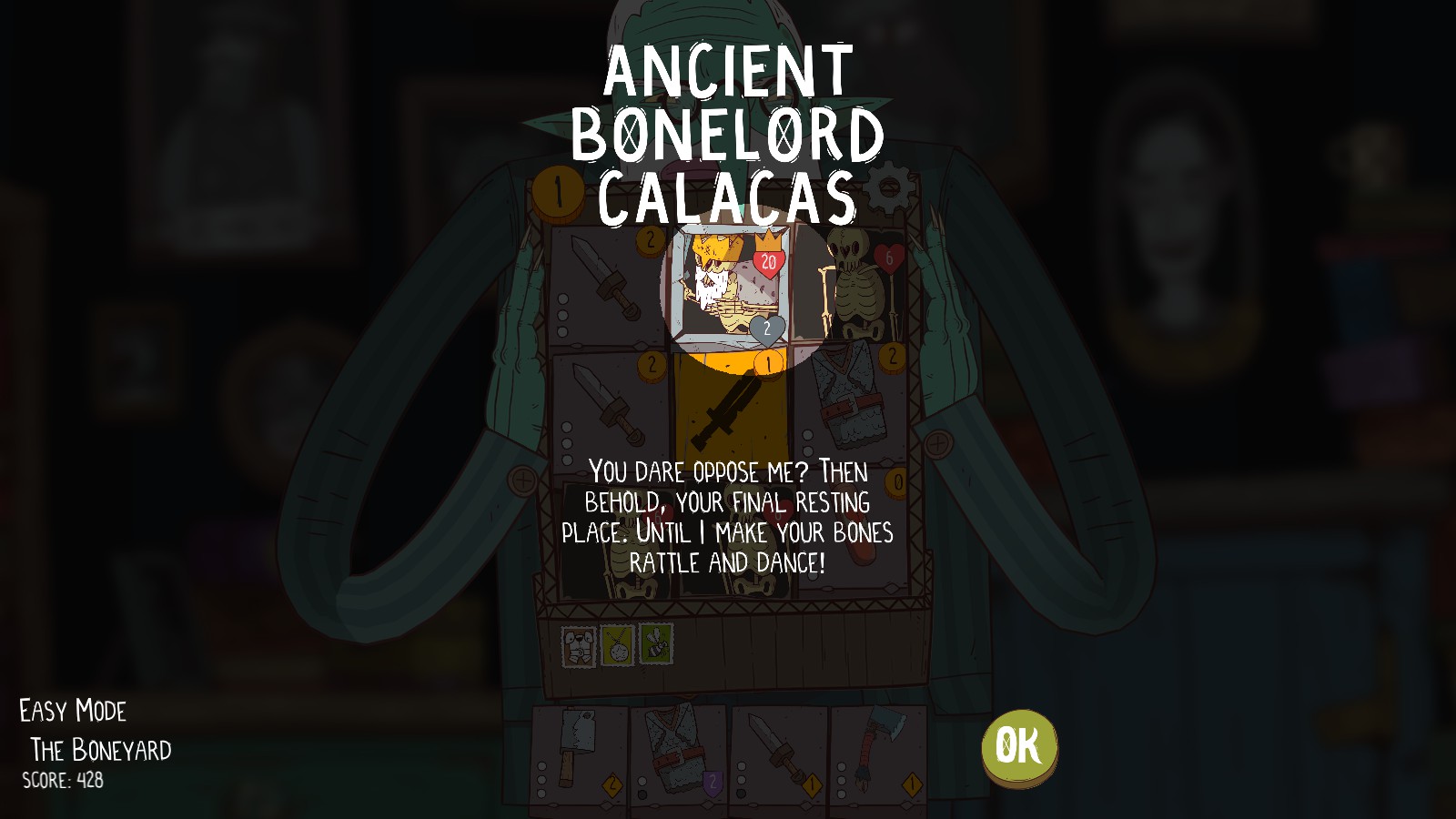 Meteorfall: Krumit’s tale is an unique deckbuilder and is a little slower than other titles of the genre, but it’s enjoyable all the same. If you’re into deckbuilders, especially ones that are dungeon crawlers as well, this game will not disappoint. It’s easy to pick up, but with the layers of strategy that is implemented and exchanged depending on what character you’re playing, what perks you pick up, and the tiles you grab, makes it hard to master. I also really love the art style this game goes with, it easily reminded me of Adventure Time, and how each character and enemy was animated. Not to mention the humor sprinkled in. For the downsides, the only ones it really has are ones that accompany every deckbuilder, that being RNG and it can be discouraging when you’re dying over and over.

Luckily, there is a demo available for anyone that isn’t so sure about whether or not they’ll end up enjoying the game.