Man, I wish I could get a Gift from a mysterious Gate.

In Ageless, you take control of a young woman named Kiara who is currently aimless and looking for a purpose or at least something that will let her get unstuck. A reason to keep moving. So she went to a place called Pandora to search for a Gate that is rumored to grant Gifts. The rumor foretells that if you find Pandora’s Gate, you’ll be granted a Gift that you need, not that you want. Well, it’s been three years since Kiara first started looking. The only thing keeping her from turning back is the fact that she already sunk in three years of her life searching, so she might as well continue or die trying. 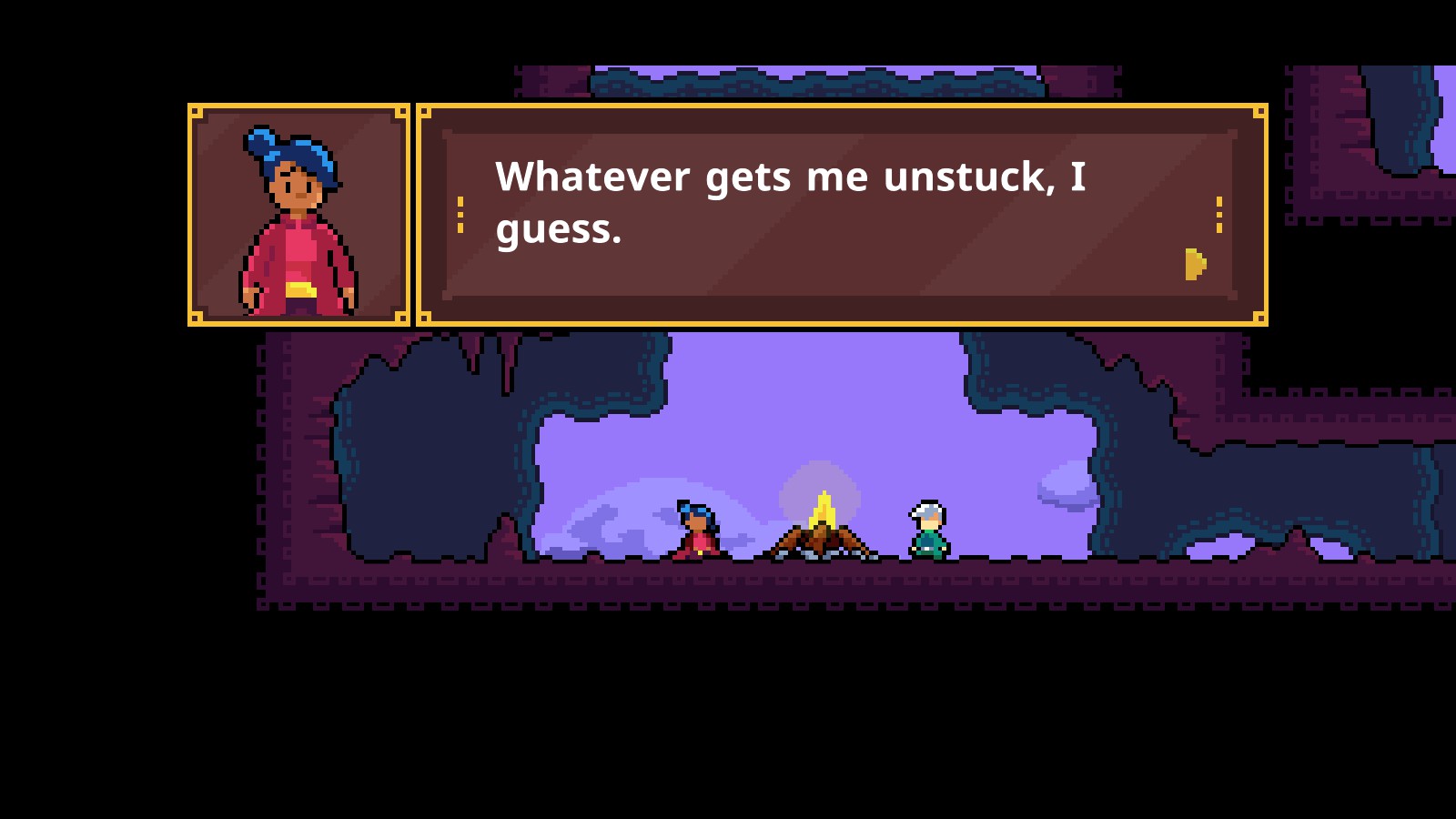 On the day you join Kiara on her journey, she comes across a huge gap that she tried to jump, either thinking she could make it or was just too distracted by her thoughts, that causes her to fall. When she comes to, she’s greeted by a young man named Vi who ventured into Pandora to look for the Gate. For Vi, he went out to get a Gift in hopes to help his gravely ill little sister that will die any day now. Vi already got his gift of being able to create portals and is heading out, but he assured Kiara that the Gate is close and maybe come visit his town. Well, funnily enough it was really close and she is gifted the ability to age or de-age plants and animals. With this new ability, she sets out to journey through a mysterious world to help Vi, his little sister, and anyone she may come across out. 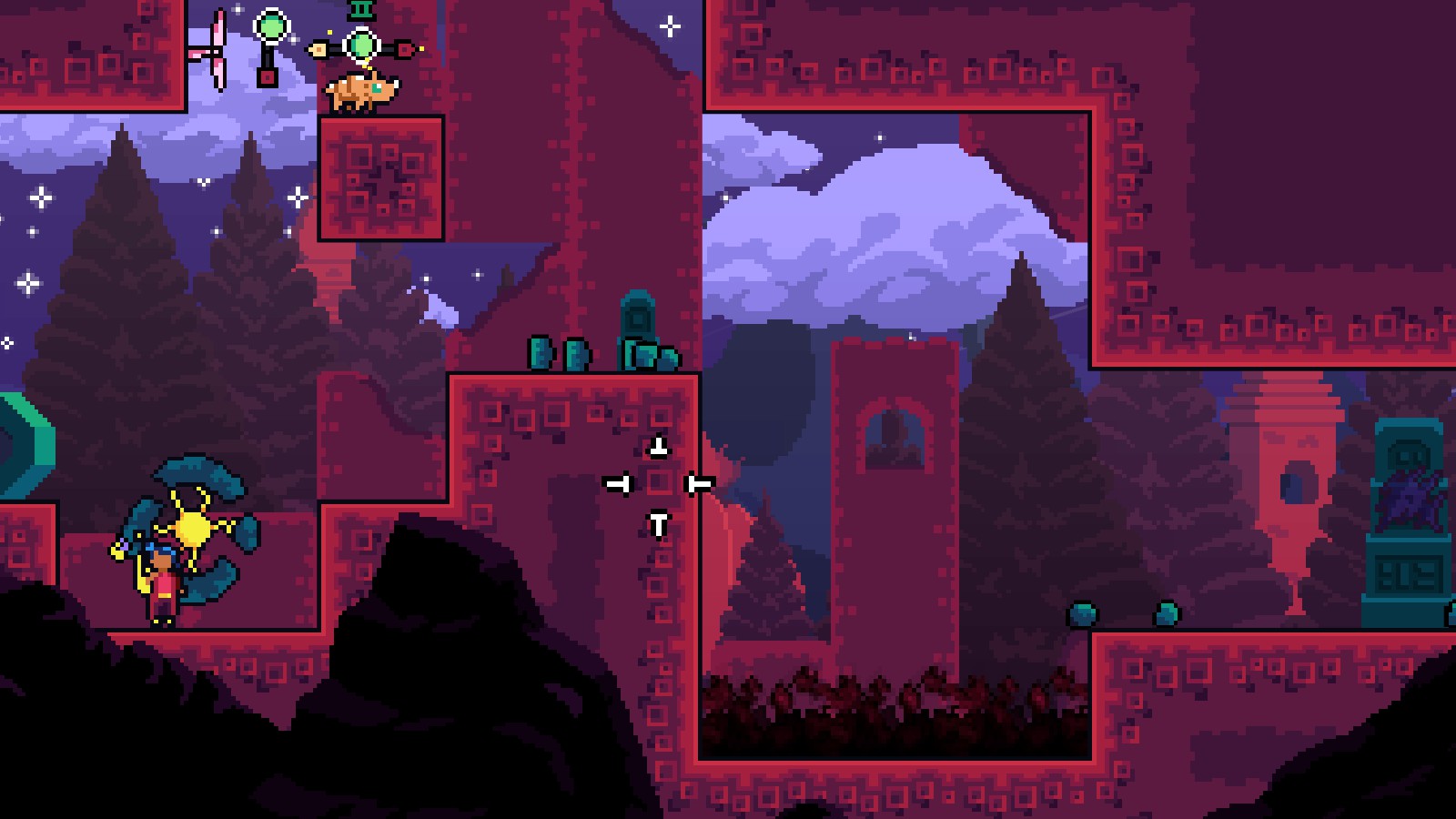 Each area you’ll be traveling through will require you to go through multiple puzzle rooms that you can’t continue before solving them. This will require you to use your newfound skills, platforming skills, and your knowledge of each aspect present if you want to move to the next room. The most important aspect is Kiara’s gift. To age or de-age something, you’ll need to make sure you have the arrow you need drawn and aim it right at them. Depending on the plant/animal and which age stage they’re at, they’ll interact with the world differently. The first animal you’ll come across is this ancient Rhino. A young Rhino is harmless and just wants to eat plants, but aging it up to Prime will transform it into a charging Rhino that can charge through weak walls and kill you if you’re not careful. Early puzzles are pretty easy, but they become harder as you go on as platforming becomes tougher (partly since you’ll need to be precise and fast at times) and figuring out what you need to do with each plant/animal in the room takes longer. 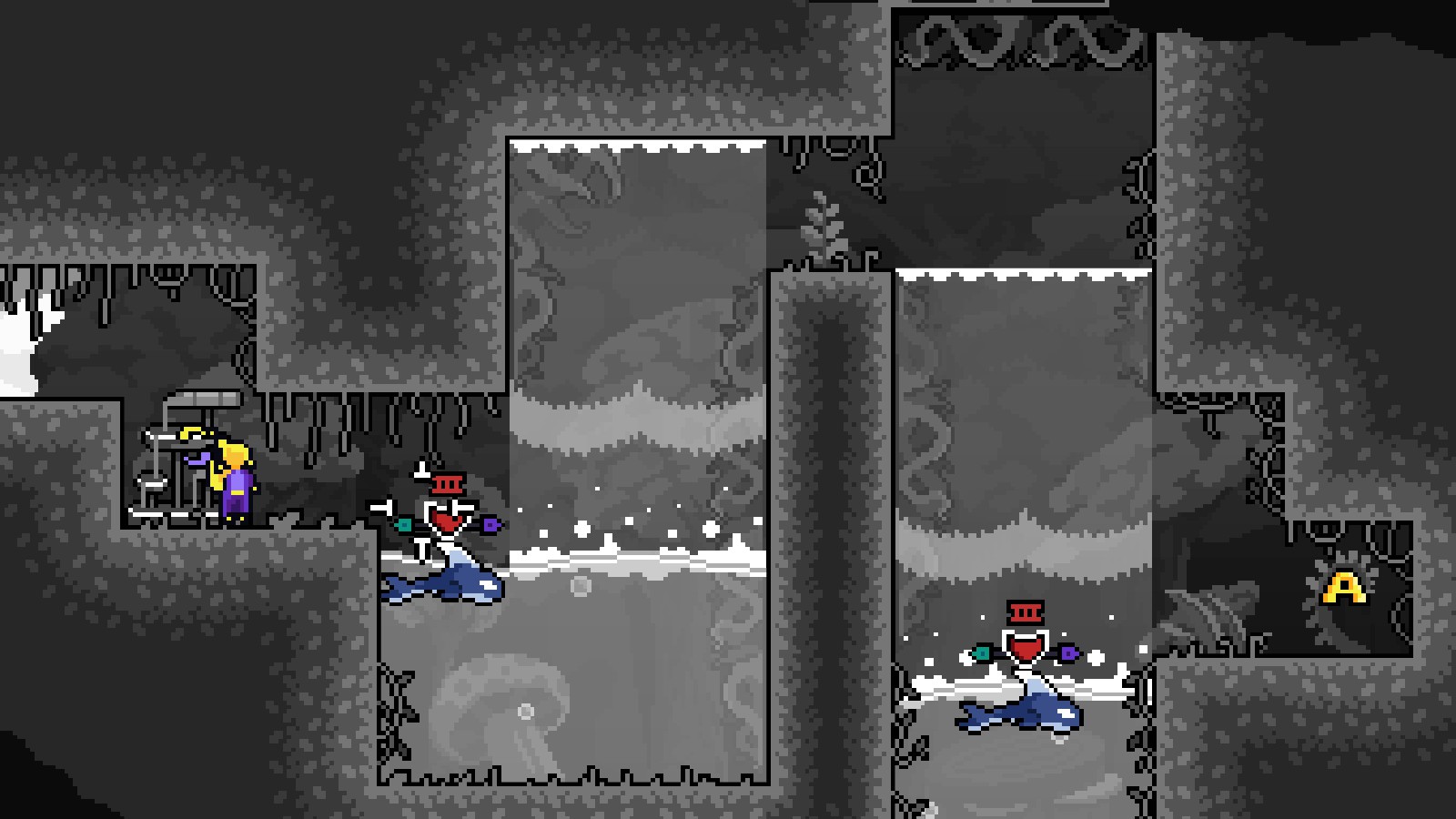 Kiara can also become ageless, which will stop time around her for a few seconds. In this mode, if Kiara is touching something that she can age, she can actually launch herself with the energy that is given by de-aging it. This lets her jump distances that she won’t be able to without it. Since what she’s touching launches the opposite direction, you can also launch what you’re touching if needed, though make sure you’re not going to launch yourself into spikes. Don’t worry if you do die, you’ll just respawn at the last checkpoint (which is put at the beginning of each room).

If you’re worried about this becoming stale, Ageless does a good job at keeping it fresh. Not only will each area you go to differ based on aesthetics, but what animals and plants show up, how those animals/plants react to the world, and the gimmicks that it has. The next area you go to, Remnant, is a lush forest with gates requiring you to collect three butterflies, dolphins that you can ride during its Prime, and a plant that you can bounce off of or fire thorns depending on the age. One of my favorite areas appears late in the game, but I will say that the gimmick tied with it involves becoming a ghost to bypass walls or enemies. 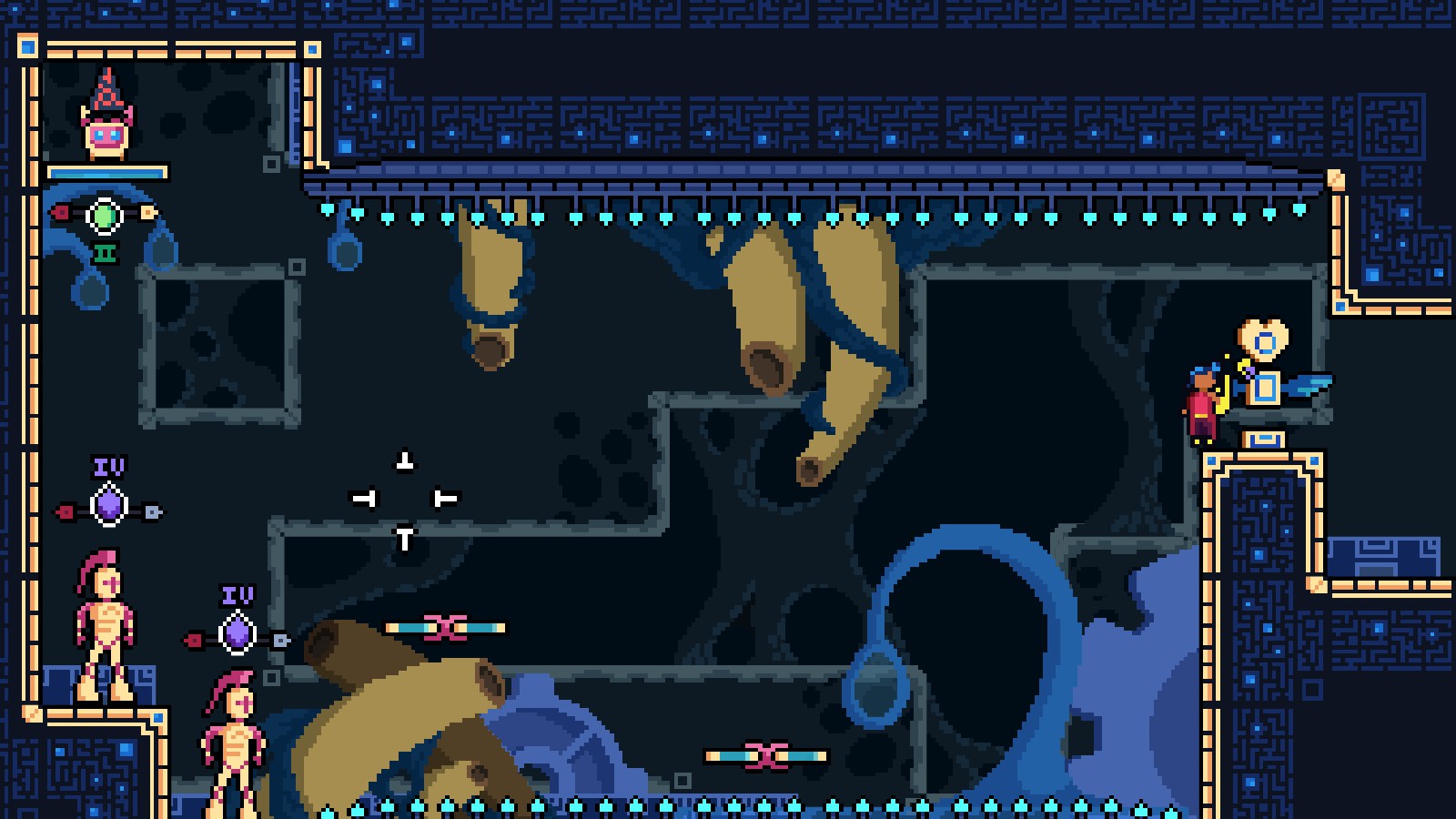 Ageless offers players to play it with a keyboard and mouse or with a controller, with no listed preference that the game might work better with. “But why mention this since most games offer this option” I hear you thinking. Well, while this is going to depend on your preference, there are pros and cons depending on which one you’ll be using that will affect gameplay more than some other puzzle platformers. Considering that the main mechanic is using your bow to age or de-age something, using a mouse will give you more control. Using a controller won’t give you as much control and you can easily throw your arrows off by slightly moving the stick right before releasing, but time does slightly slow down while aiming and you can see the path the arrow will take rather than only the reticle you’re aiming with. Personally, I played the whole game with a controller, with the occasional use of a mouse as some puzzle rooms are more difficult to complete when using a controller.

There are collectibles that you can find and try to get. Most areas have Relics hidden around, which are just yellow capital A’s, that you can only see when you’re in ageless mode. Some Relics will be in a main puzzle room, while most will require you to enter a hidden room. To get to these, you have to first figure out how to solve the room puzzle (or find a way to get to Relics placed in required rooms), grab them in ageless mode, and make it to a checkpoint before you die. Each relic you collect will color in one more aspect of a diorama of that area, which you can get to through the overworld map. You can also use the overworld map to check on how many Relics you need left per area and select which part you want to jump to (though you do need to guess where you possibly missed a Relic). 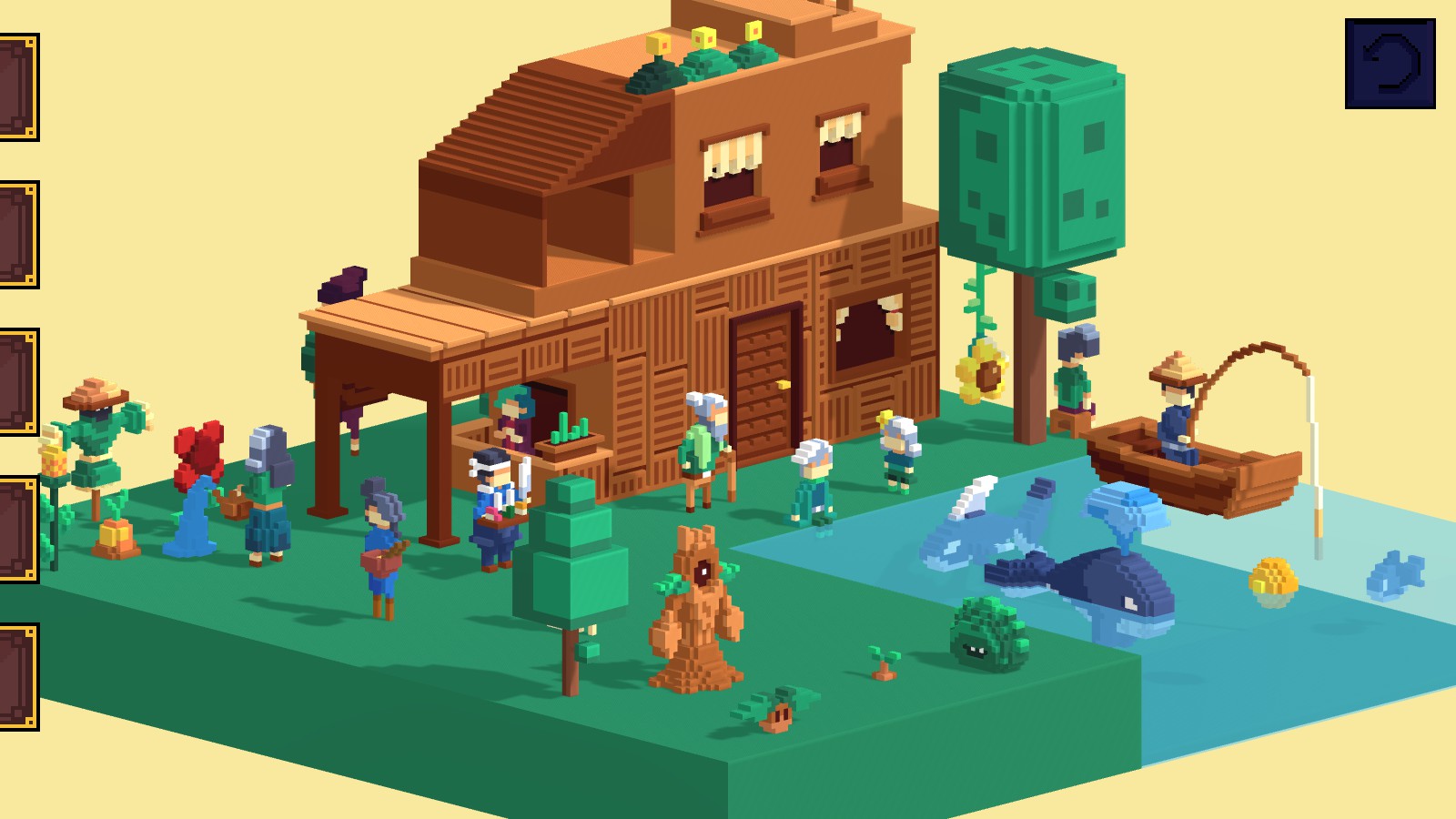 All in all, I enjoyed my time with Ageless. It was really creative building a game around aging and de-aging animals and plants and it keeps it up with each area. The story, while not delved into as much here, is engaging and has some surprises throughout. The only frustrations I had was how precise and fast you’ll need to be with some puzzles, as with those puzzle rooms I often knew what I had to do, but I was just slightly off. So if you’re someone that avoids puzzles that require you to be really precise, this might not be for you even if many puzzles don’t require it as much. For those that play with a controller, or thinking about buying this on the Switch, another con comes in as the aiming can get in your way of completing puzzles.

If you’re at all interested in Ageless, but not exactly sure if you’ll like it, you can still try out the demo before committing to a purchase. The demo starts right after Kiara receives a Gift and ends once you finish Pandora. I certainly would not have picked this up as quickly without the demo.