Ever wondered what RimWorld would be like in a dark fantasy setting if your goal was to kill everyone? Me neither, but it looks like it could be fun!

Ruinarch is the upcoming “evil overlord simulator” from Maccima Games, soon to be released on Steam in Early Access. I was lucky enough to receive a pre-release Steam key to take a look at the game, so please bear in mind that the game may have changed significantly by the time you read this.

The Steam store page makes the game appear rather grand, even claiming that gameplay works “… on an epic scale”. It mentions emergent storytelling and multiple different play styles, immediately bringing RimWorld to mind, and the top-down, tile-based graphics are reminiscent of RimWorld, too. So it was with fairly high expectations that I started up the pre-release version of the game I was given to review.

I’ll look at the presentation of the game first, since it’s the easy bit. 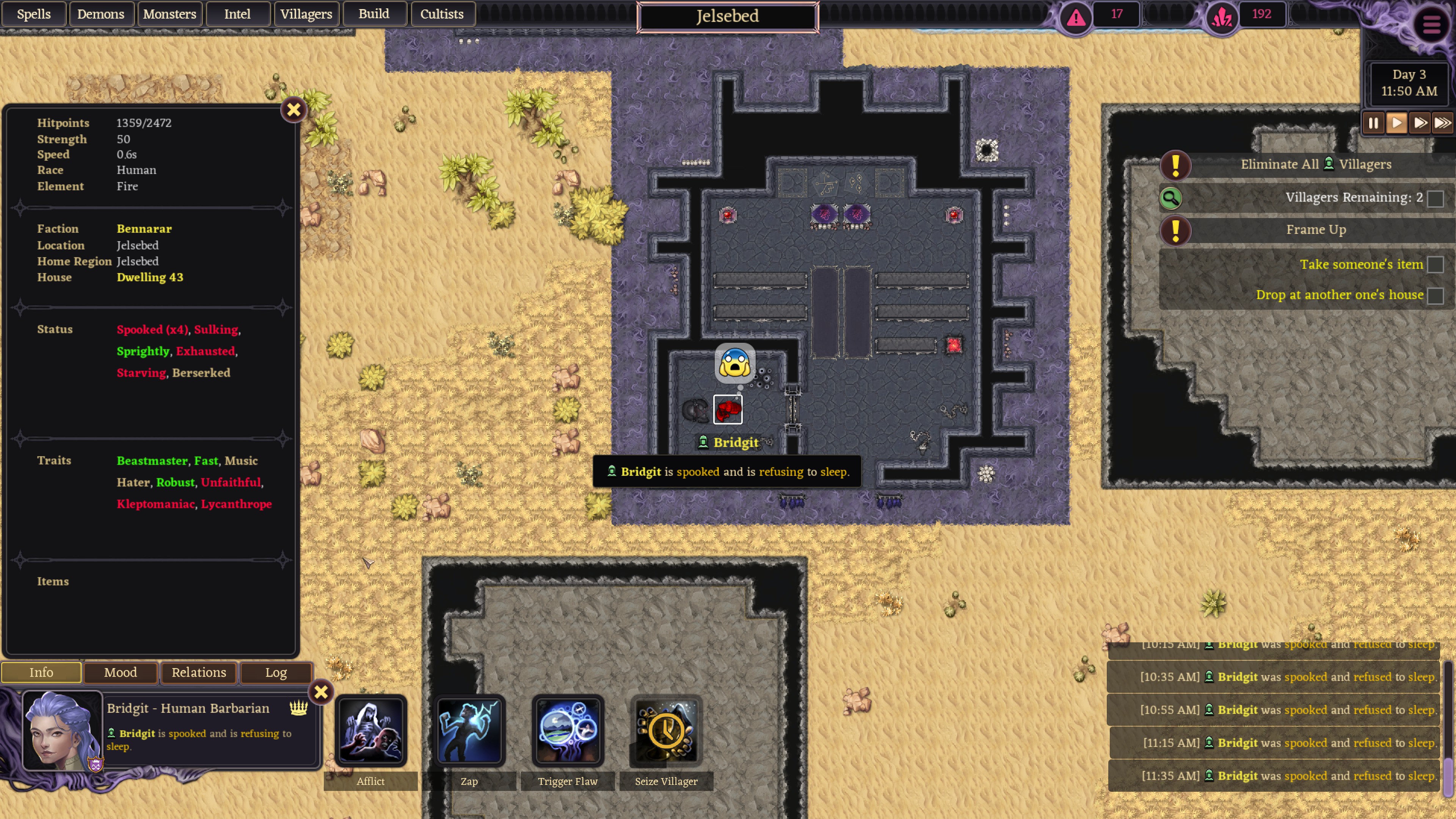 The in-game graphics, as mentioned, are top-down and tile-based, so if you don’t like those then you’ll probably think Ruinarch is ugly. The tiles are mostly pretty good, though I have had a little trouble distinguishing between different types of terrain, objects, and creatures on occasion. The characters — both creature/monster and humanoid — look pretty cool in a sort of Grand Theft Auto (the original!) type of way, with a few different shapes and skins making them at least a little distinguishable most of the time. If you’re used to RimWorld’s pawns then this should be a step up — these are less cartoony and more lifelike — but I definitely prefer the RimWorld tileset to Ruinarch’s; it’s cleaner and more usable.

The interface is well laid out and should be pretty similar to RimWorld players, too, though the category tabs are across the bottom rather than the top. Tooltips are plentiful and mostly useful, though a few are missing or lacking in detail, and when I forgot where to find something it was usually where I first thought it should be when I went looking. There are a few relatively minor grammatical mishaps here and there, too.

There’s no minimap, which hurts the game a little, as I often had trouble finding things once they were off screen. Again, a bit more variation and detail in the tileset would probably offset this a bit, but ultimately I don’t see any reason to not have a minimap. 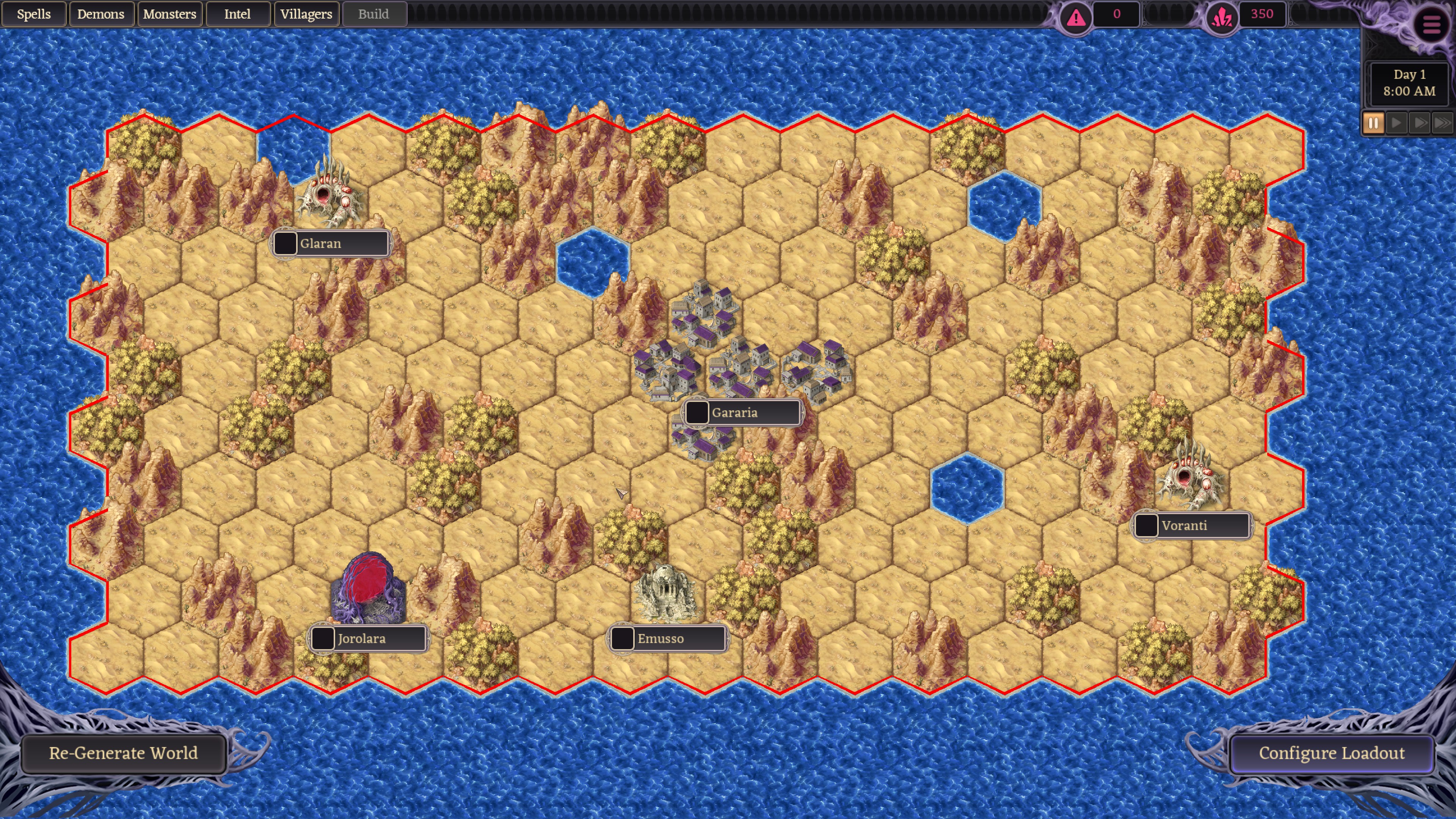 Camera controls are easy to get used to, but the minimum zoom level (i.e. where you can see the most of the game map) is far too big, limiting your range of view far too much, especially on a 4K monitor at UHD resolutions. I’d like to be able to zoom out at least twice as far. This compounds the issues caused by having no minimap, making it very easy to lose track of the action or forget where you were working if you’re distracted by some event or other.

Music is what you’d expect: a sort of heavy orchestral, dark fantasy soundtrack, but it seems to be a bit thin on number of tracks; I found myself often thinking I was listening to the same thing over and over while playing. It suits the game very well, though, so with a few more tracks — or maybe a tiny bit more variation — it should be perfect. Sound effects are pretty limited and underused. The UI clicks are good for feedback, but a lot of what goes on in the game world has no sounds to accompany it, so there’s definite room for improvement there. 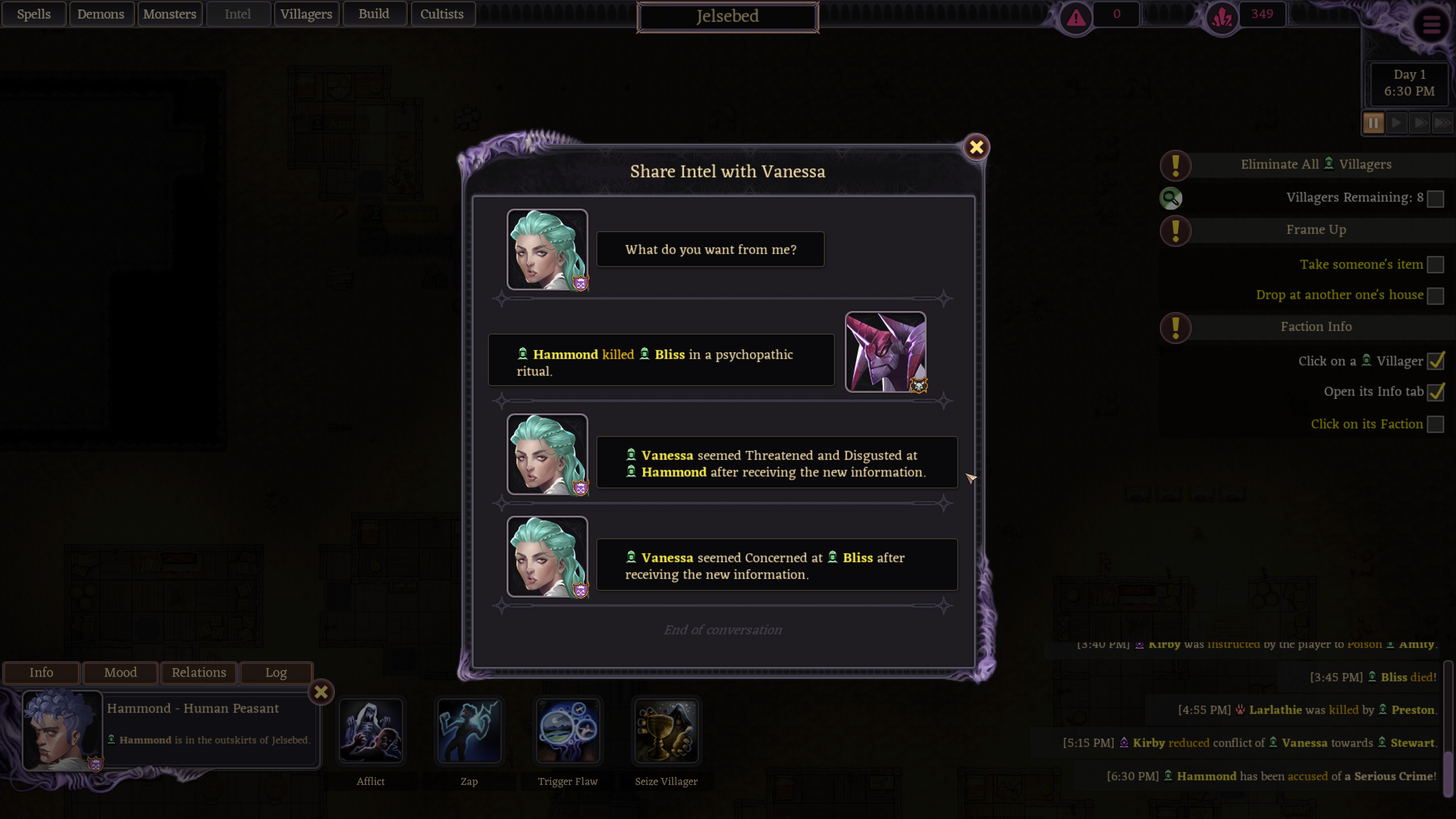 Ruinarch’s gameplay is where most of the improvement needs to take place once the game launches into Early Access on Steam. The gap between what’s here now and what the store page promises, or even better, what the game could be, is rather wide, indeed!

The core gameplay loop is very similar to most indirect colony sims, such as RimWorld, where the player doesn’t have any direct control over the inhabitants / colonists, but instead influences them through various actions, controls, etc. The big difference here is that those actions and controls are “evil”, with your goal being the deaths of the target village’s inhabitants! While that’s a pretty big shift in focus, the game actually plays surprisingly similarly to a normal colony sim most of the time.

The interface provides information on inhabitants’ traits, moods, relationships, and the like, and during normal play all of the characters go about their business, working, fighting, addressing their basic needs, and amusing themselves in various ways. You can cast spells to directly affect the village and its inhabitants, but many of these make them quickly alert to your presence. You’re able to grab villagers and move them around — which costs you mana and also makes the village more alert to your machinations — but, apart from some occasional light brainwashing or torture, typically you’re better off working in more subtle ways. These tend to be more or less effective based on the specific characters with whom you interact.

There’s a good range of randomly assigned character traits to allow similar sorts of in-game storytelling opportunities to RimWorld, though I don’t think it’s quite as wide as RimWorld’s here. These include positive and negative modifiers: alcoholic, evil, kleptomaniac, … . The list goes on and I suspect I haven’t seen all of them in my short play time so far. As with RimWorld, it’s the combination of these traits, the relationships between the characters, and the events that occur, that make the game fun, and at times remarkable. 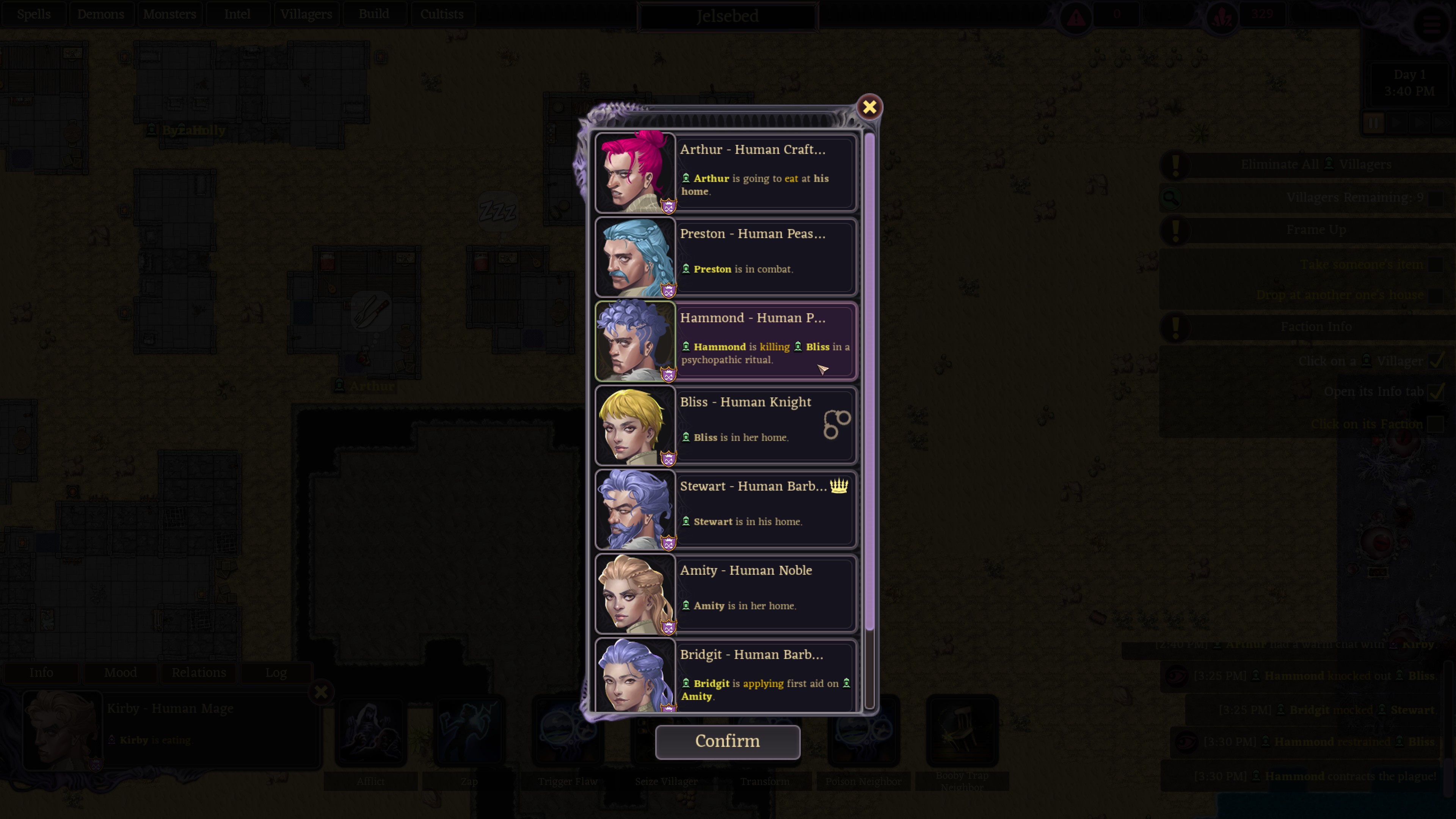 For example, my first proper game had a music-hating husband married to a blessed music-loving wife, whom I couldn’t affect at all. I afflicted the husband with psychopathy and targeted his urges towards music lovers. His wife’s blessing didn’t help her that night! But one of the other characters saw him dragging off her body — the AI is quite poor with regard to people trying to hide their evil actions, and definitely needs to improve in this regard — and she attacked him, but didn’t kill him. He was dragged off to prison.

Meanwhile the poor peasant I’d afflicted with vampirism had contracted the plague that I’d afflicted on one of the other characters, so everyone he fed from subsequently also contracted it. The psychopath ended up in prison, but still managed to somehow attract the attention of the village leader’s wife, whom I afflicted with unfaithfulness. So her late-night visit to prison gave him the plague, and he died sick and alone in his cell … staring at her decomposing body.

You can also cause strife in the village through interacting with objects and creatures. Steal something from one character’s house and place it in another’s, then have the owner of the stolen object find it. Or record any particularly juicy happenings and then tell them to the characters who they’d affect most negatively, then sit back and watch the fireworks. No one wants to live next to a lycanthrope, after all! 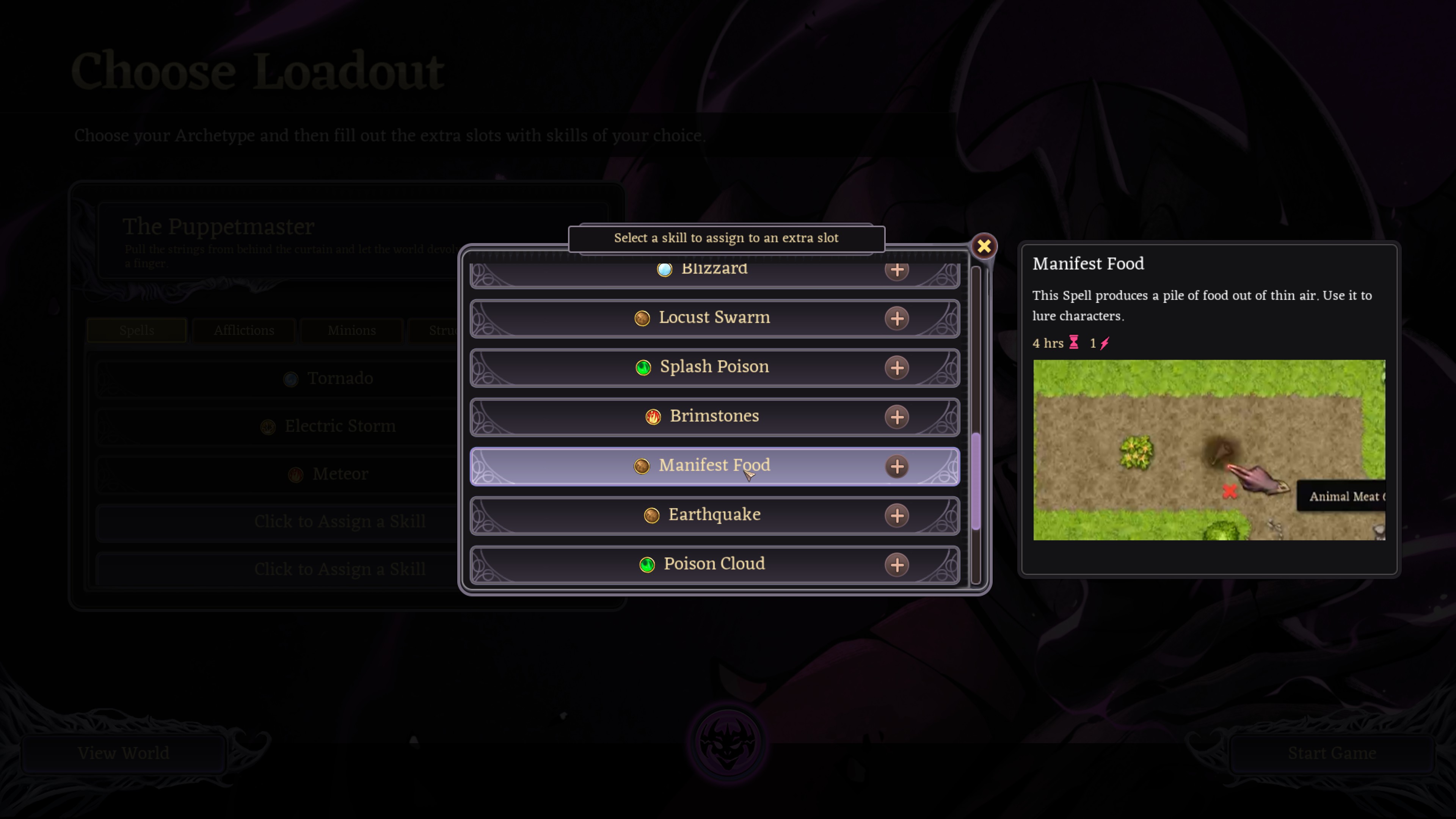 The Current State of Play

So all of this sounds great and works well, up to a point.

The game currently only offers two scenarios: a tutorial and a single small village, though at least the latter is procedurally generated so it’s a little different each time. There are not yet any larger scenarios or large-scale world generation. There’s also only a fairly small number of abilities available, and only a single demonic archetype that you’re able to play. I expect all of this to improve dramatically, based on the developers’ stated plans for Early Access, but in its current state, Ruinarch is very limited.

The post-tutorial scenario is also exceptionally easy; I completed it with no concerns whatsoever in about an hour on my first play, and then wondered what else there was to do. 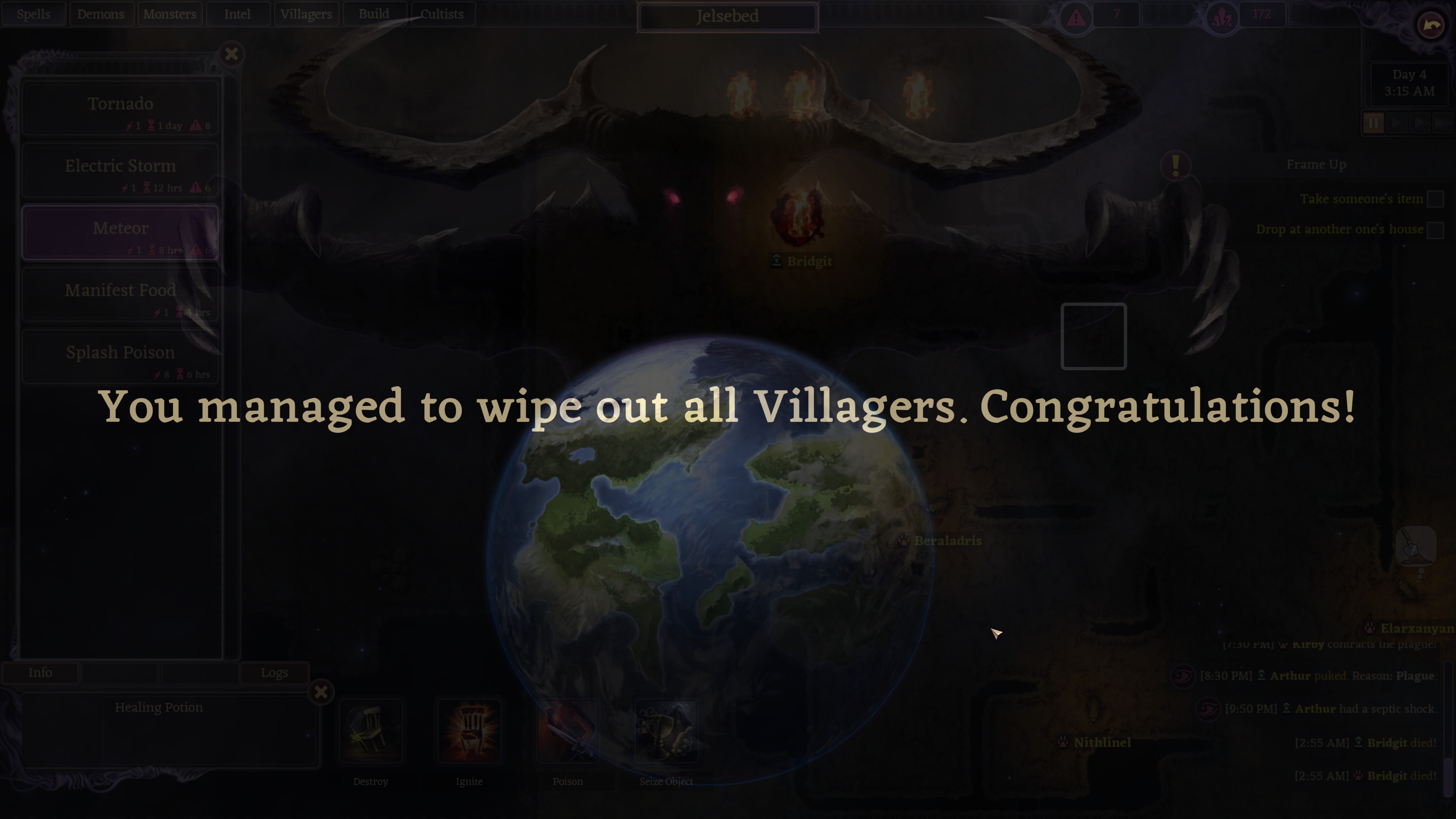 If you think you’d like just playing around and treating it as a fairly limited, but somewhat fun, sandbox, then you could probably stretch out your enjoyment for another few hours, and I’m sure you could write some fun fiction around the characters you encountered and the events you inflicted upon them as you played, too. But as far as any sort of directed or goal-based gameplay is concerned, there’s only an hour or two of content here at the moment.

It’s also pretty buggy. I had three attempts at the tutorial before finally completing it; the first crashed to desktop, while the second ended up in a state where time kept moving forward, but nothing would move anymore. And the AI is pretty limited, making many of the more insidious things you could do much less fun than they should be. What’s the point in making a psychopath if he doesn’t try to hide it, after all!?

The main menu includes “Continue” and “Load Game” options, but I haven’t managed to make the game save anything yet, so these seem completely useless at present. Oh, and it includes three Steam Achievements at the moment, but they don’t work.

Once again, I’m sure most if not all of this will improve; I’m just giving my opinion on what’s available now. 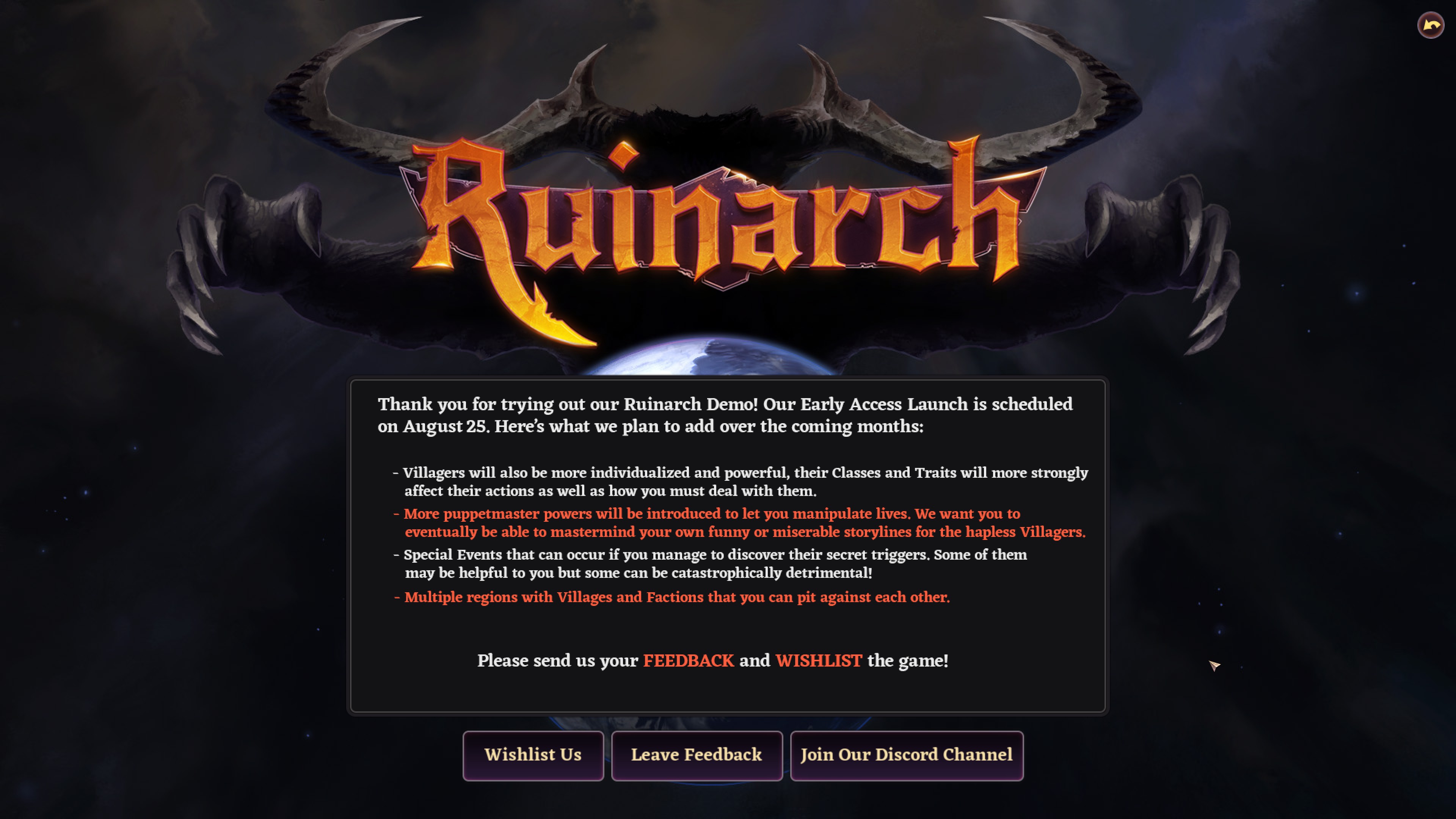 I’m very keen to see Ruinarch again in a few months, or at the very least once it’s finished its EA journey, as I think it shows amazing promise. If the developers can add significant depth and complexity to its systems then it could be a sort of evil fantasy “RimWorld-like”, which is definitely something I’d like to play. At the moment, though, it’s a fairly shallow shell that hints at what it could be eventually, and even has occasional moments of brilliance, but isn’t much more than a fun distraction for a couple of hours.