Diet got ya down? Live vicariously through this quirky shooter.

Eat Your Greens, Your Bullets, and Most Importantly, Your Enemies

Everyone likes a good pun or play on words, and video games have gotten a lot of use out of them over the years. Sometimes a whole game can be made out of one – Enter the Gungeon based a whole setting and aesthetic on their own. Bite the Bullet reminded me a lot of that game, since it’s done the same with three words and created a pretty decent shooter out of it. Good thing for them that they did, eh? Can you imagine what I could have come up with if a game called ‘Bite the Bullet’ was bad?

Set hundreds of years into the future, Bite the Bullet explores the logical conclusion to food shortages: all of humanity has been implanted with bionics that allow them to eat pretty much anything, with the caveat this turned a certain portion of humanity into ravenous ghouls, forcing the rest of them to flee Earth. …Well, alright, maybe not so logical. You play as Chewie (or Chewella, his female equivalent), a mercenary in the employ of DarwinCorp who has been hired to track down several notable mutants on the remains of Earth and bring back their bio-material. As you can probably glean the game isn’t the most serious affair, and basically every conversation Chewie gets into has some food joke or pun. My personal favorite so far is him claiming he once tried a procedurally generated diet, made up of the first thing he touched in his fridge every meal. 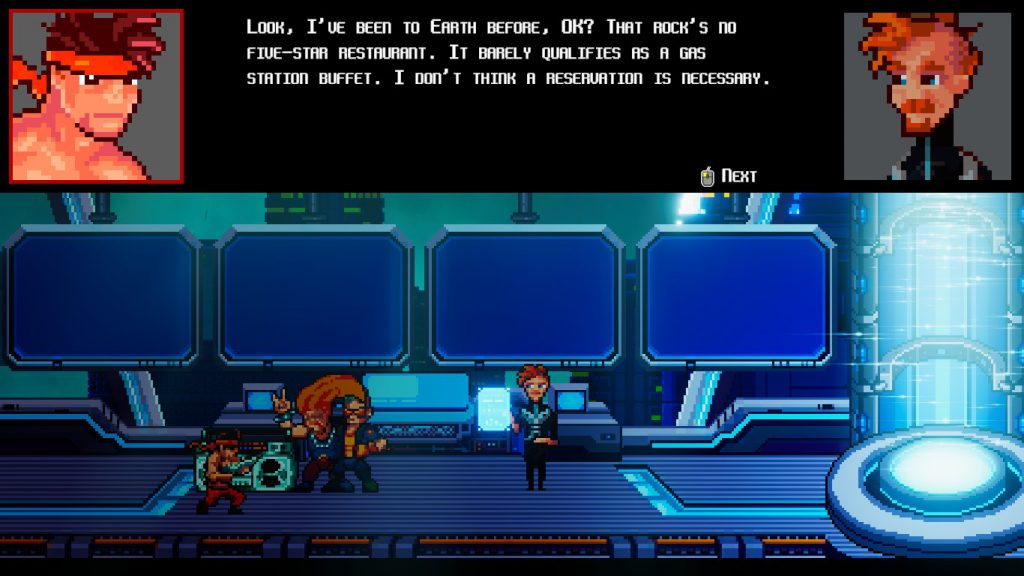 The meat (ha) of the game is its run and gun levels, where you’ll jump and dash from point A to point B through the remnants of Earth, shooting and eating anything in your way. Yes, eating; Chewie’s a hungry lad, and the solutions to sating it in levels range from living foodstuffs you’ll come across to any enemy once you’ve weakened them enough. This gives you varying levels of Calories, Fat and Protein, which affect your stats. Obviously having higher fat will give you more health, for example but it also turns him plus-sized, Metal Slug-style, slowing Chewie down. Doing athletic things like jumping burns off the latter two, while Calories drain on their own, as well as power your skills. Eating also fills up a bar that lets you rampage for a little while in a powered up ghoul form.

Past the gimmick, Bite the Bullet’s actual shooting is pretty satisfying, having meaty guns to shoot and enemies that have just enough health to be gratifying to kill. You can double jump and dash, giving you some good mobility, and dashing past an enemy damages them. Levels are also varied enough to be interesting, with various caches of items or secret areas to spice stuff up. 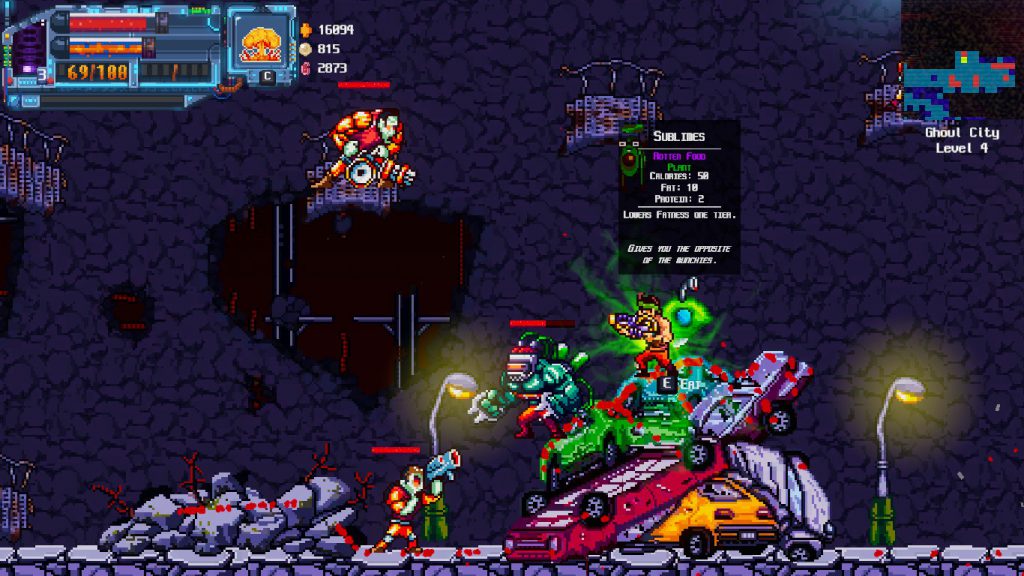 It isn’t just a straight shooter, too, as Bite the Bullet boasts a pretty sizable skill tree to choose from between levels and change up how you approach things. You could stick to general buffs and all the food groups, or specialize in a particular one for spicier tools. I went for the Vegetarian tree which gives you things like passive damage to nearby enemies and spore bombs.

However, this comes with the caveat that you can only eat things of that food group without getting sick and receiving little to nothing from it. I feel like this is somewhat at odds with a major thing you’d use nutrients for: weapon crafting. You find guns throughout the levels with different damage and modifiers, and every so often you’ll also find rotten food you can eat, causing you to throw up and giving you the chance to, uh, ‘modify’ a weapon. 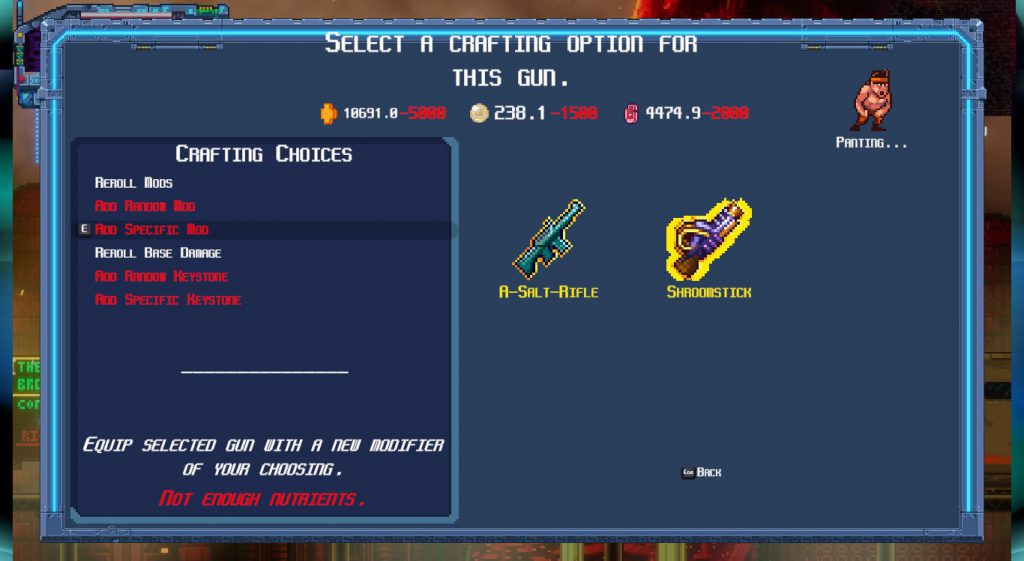 Thing is, you need significant amounts in all three categories to do significant changes, and not everything gives equal amounts of those. Plants, as you may or may not be surprised to learn, don’t give much fat, forcing you to rely on other pick-ups if you choose to go that route. I’m not sure if this is by design, since the Veggie part of the tree is pretty damage-focused, but it is odd.

Another thing I’d call a flaw is how the game saves progress in levels, which, and I may be wrong on this, it doesn’t seem to. The first level has three stages to it as well as a boss, and after quitting back to the hub level once I finished the first I was surprised to see that only my character’s progress was saved. I had to complete the entire mission to actually save my progress in the story, which could be tolerable if all the areas were standardized, but the second promptly expands to at least five. I say ‘at least’ because I ended up quitting at that point, since I wanted to take a break. 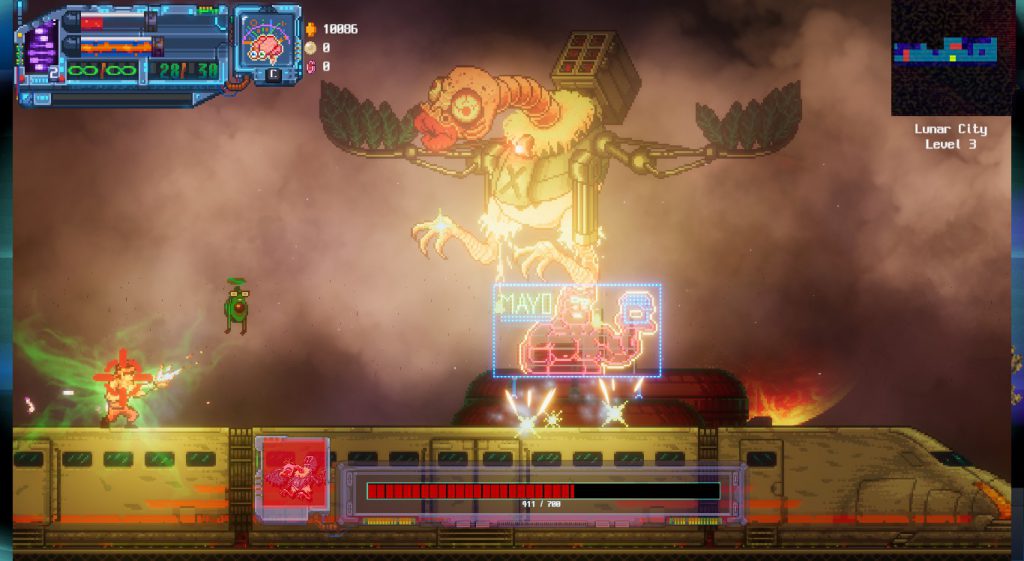 If this is how you’re meant to approach the levels I have to imagine a lot of players could bounce off in this era, since saving progress more frequently is standardized. Again though, I stress I may have been doing something wrong for it not to. The game is also receiving a day one patch, so it may just not be implemented for the beta version, which I certainly hope, as it would be a blemish on the game.

This is about the only major issue I have with Bite the Bullet though, as it’s a fine run and gun with some charming dialogue and neat ideas, with a lot of potential replay value to boot. It seems like a title with a lot of care put into it, and I do hope it pays off. I’ll give it a Save for now, though I may change this review a bit once it releases.