Of course, I always get interrupted when I’m busy

In Creaks, you play as a teenage boy where his only plans was to read his book before going to bed. It was particularly late though, so maybe he got to a particularly interesting part that he just couldn’t leave himself on a cliffhanger, or he had to get it finished pronto for school. However, that night turned out to be one that would prove unproductive as his bedroom light starts flickering annoyingly and his wallpaper starts to peel off. It’s not until a strange, loud, creak shakes his room enough to fully explode his light bulb and the wallpaper curled up on itself to reveal a small hidden door that he leaves his book. With curiosity getting the better of him (though who could blame him, I’d investigate too), he decides to grab a flashlight and see where this door leads. Hey, maybe it’ll be like Coraline… except hopefully without the Other Mother being there. 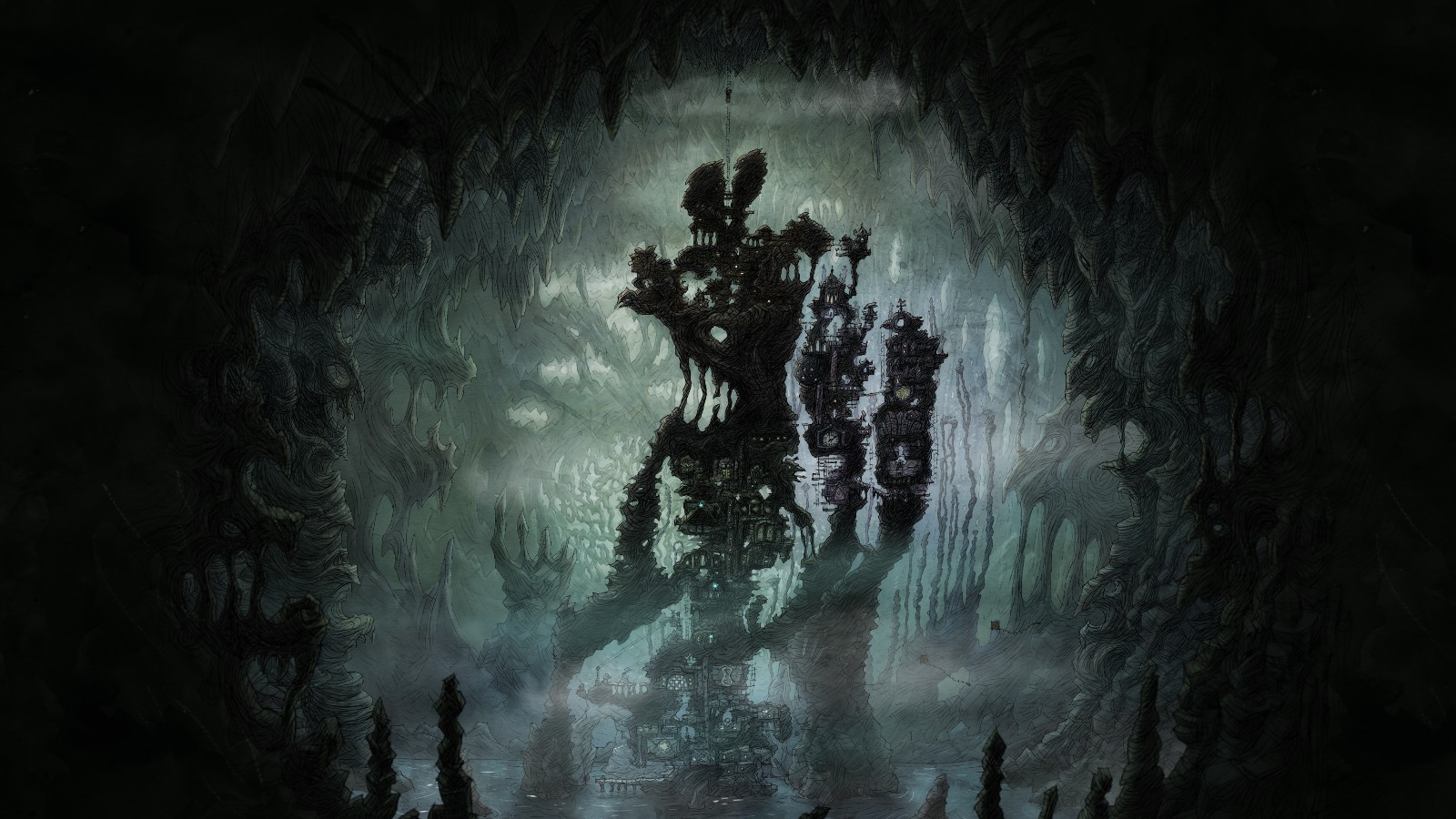 Well, it turns out to be kinda like that. After being forced to climb down an old ladder after the floor crumbles right under your feet, you’re created with a towering building resides in a cave that you didn’t know existed right under your house. Each area you’ll be going through requires you to navigate the environment as you climb ladders, jump through holes in the platforms, and figure out how to avoid and manipulate strange furniture creatures. Creaks does a wonderful job showing players how you’ll generally go about its puzzles. You start out simple with areas that lets you learn about the creature before it becomes complicated. You start with these guard dogs that will chase you if you get too close, but you can easily outsmart them as they’ll linger where you were last at even if you climbed a ladder to safety for a while, making it easier to go around them or blocking their path off with barriers. You’ll also learn that these dogs, as well as the other creatures, won’t step into the light. You’ll often need to trick them to step into where the light shines before turning it on so they’ll turn into furniture. This will help you get to broken ladders that you can’t normally reach and have pressure plates be activated forever. As you get further in, you’ll come across floating jellyfish that you can guide by blocking off their path, spikey human-like shadows that mimic your movement, and skittish goats that are content with eating grass and can run on walls if needed to. Before you know it, you’ll come across areas where multiple creatures are placed and even ones that host multiple types. 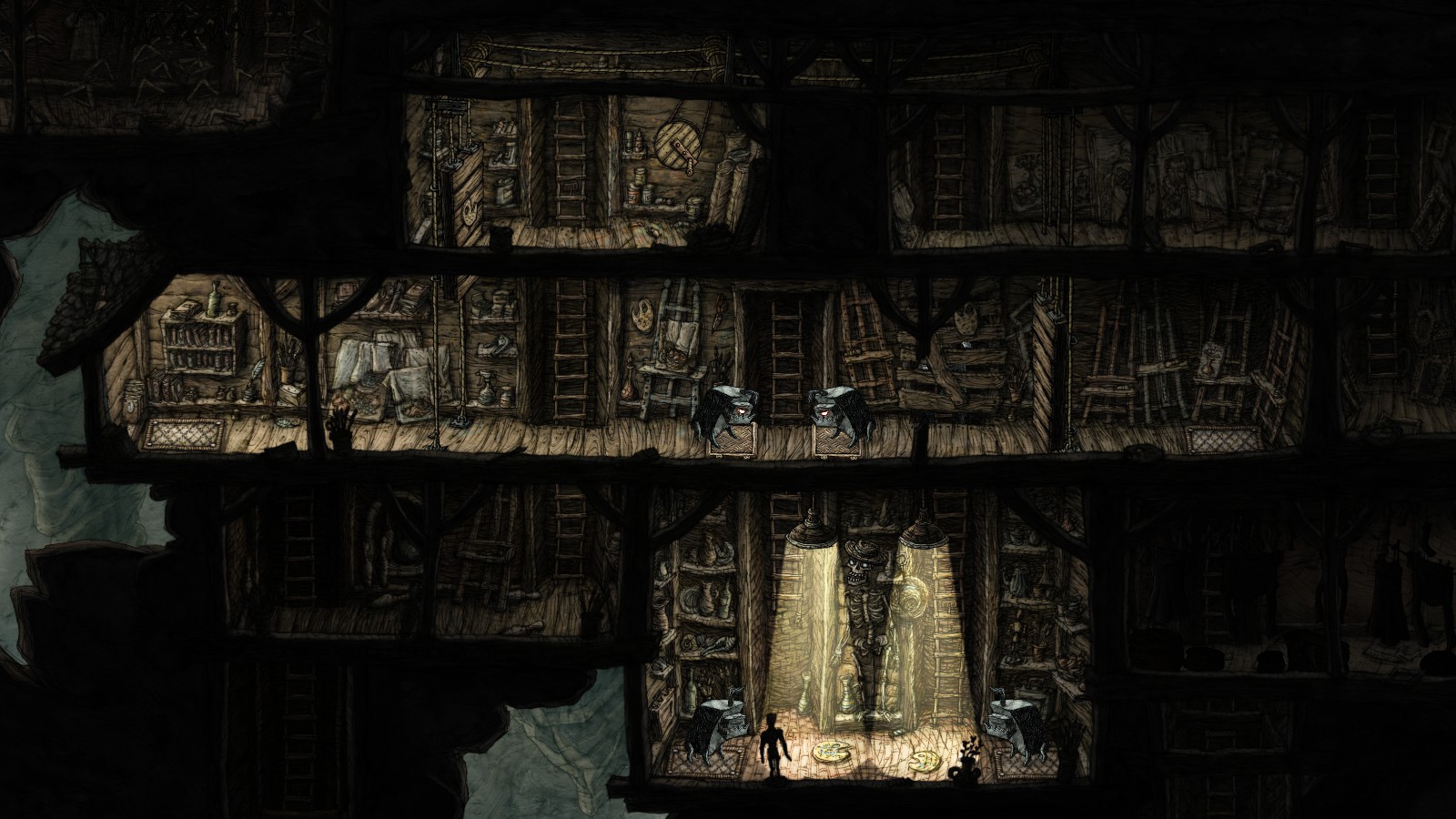 In terms of puzzle difficulty, I don’t think the puzzles are too hard nor too easy. This features puzzles that you can figure out by looking at it and all you have to outsmart the creatures, while also ones that take a while before you get an “Eureka!” moment as it all clicks. From my experience, you’re often on the right track and just overlooking something. The only time I was properly stuck was the puzzles that featured the human-like shadows that mimic your movement. For those that are worried about timing, it isn’t as bad here. You’ll need to run, but the creatures give you enough time to get out of their path and turn on a light. No puzzles requiring super precise timing here! 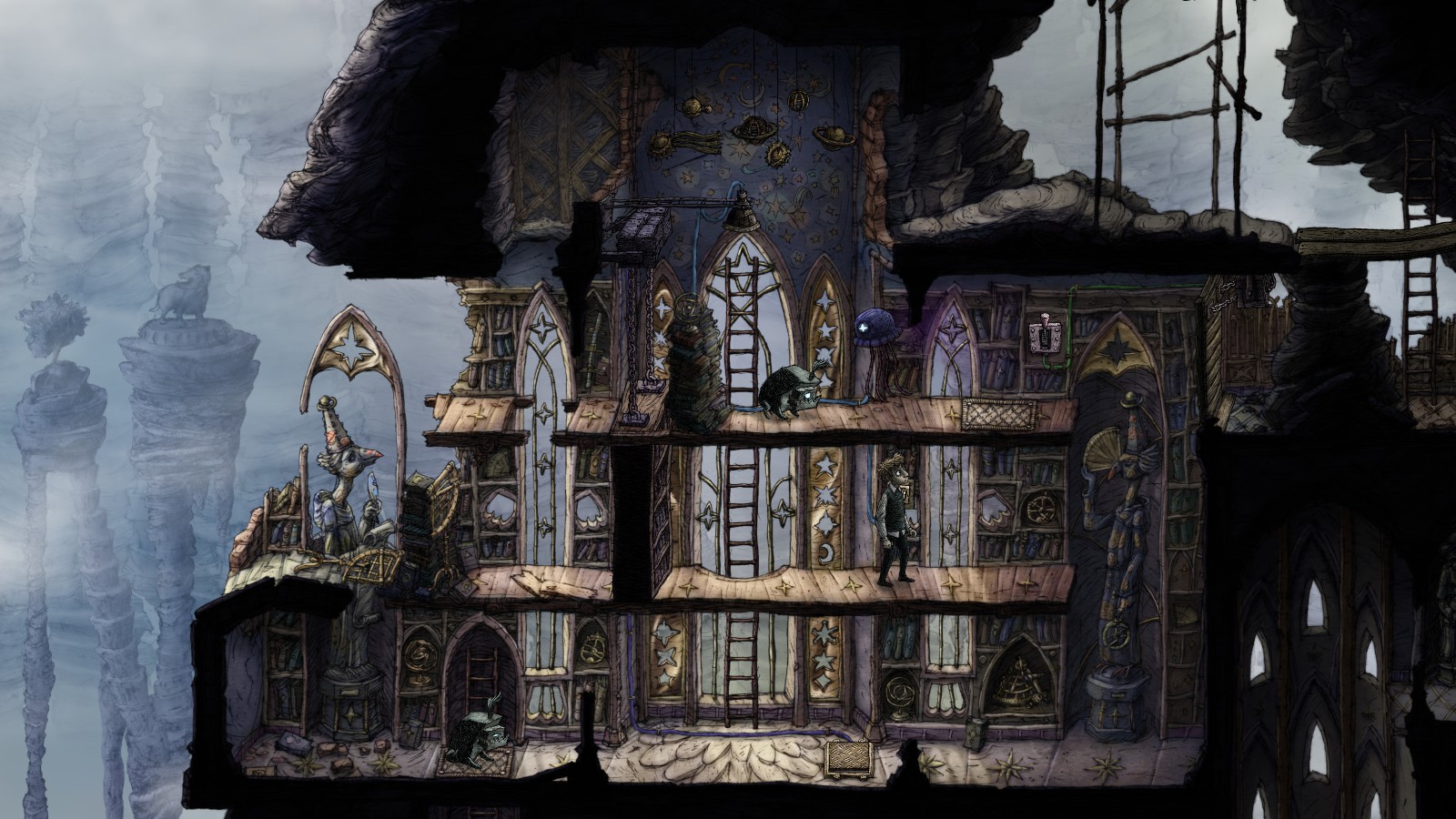 Every so often you’ll come across a cutscene featuring humanoid avians. Unlike the furniture creatures, these avians are in the same predicament as their home is crumbling due to a huge creature (that is just out of your sight) wrecking havoc. As you’re going through each area, you’ll peek into spy on them and see what they’re doing. Though, you can’t really understand what they’re saying. You’ll eventually team up with them in hopes to save their home. 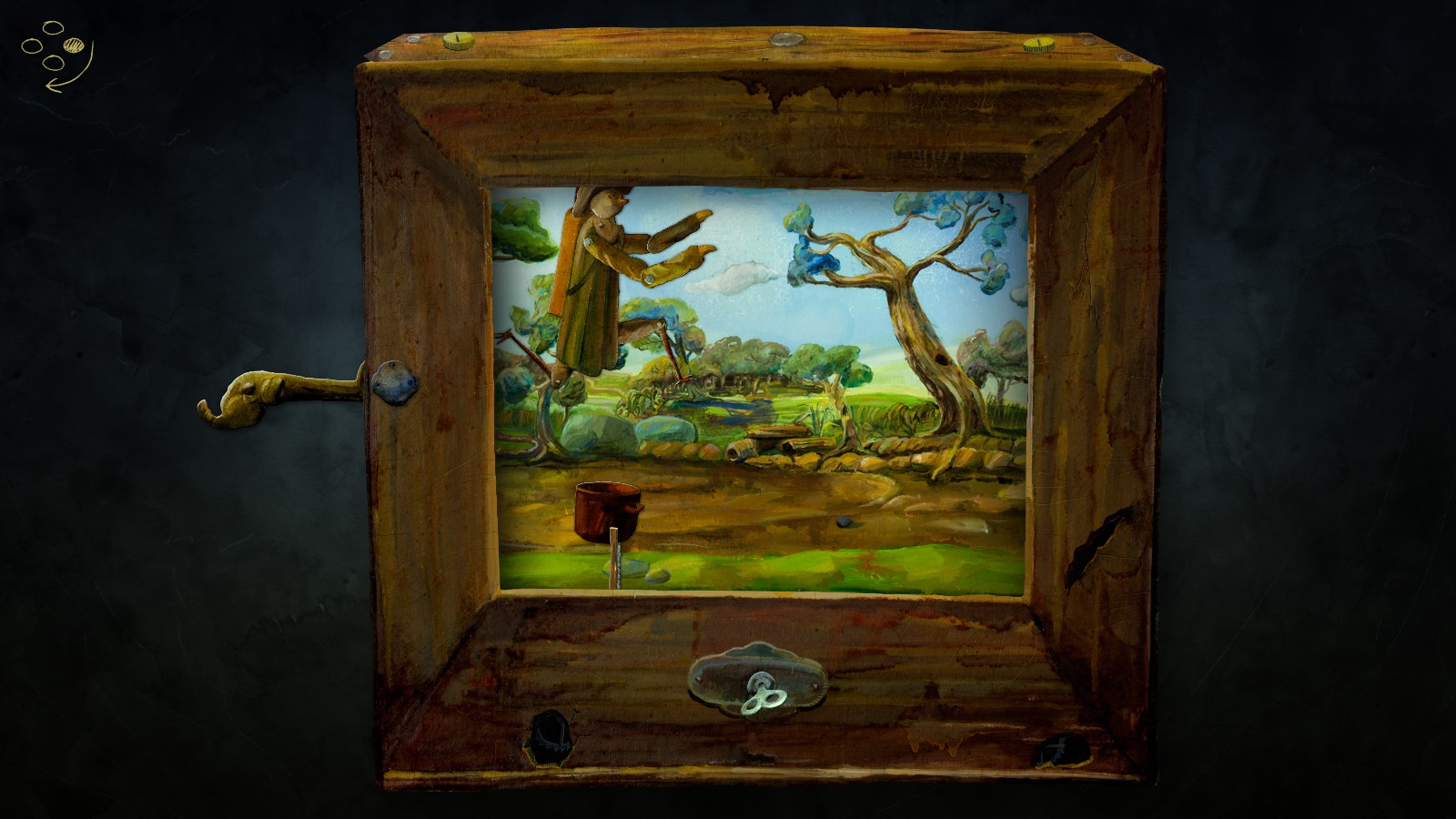 While you’re travelling through the tower, you’ll also come across paintings. Not only are they just paintings, but you can even pull the cord and have a little tune play as well as parts of the artwork move. You’ll come across the majority as you’re exploring, but some are hidden away in secret rooms. Creaks does alert you to them existing, putting you right in the path of one, and relies you on noticing areas that you can, indeed, pass through or hidden levers. There are also interactive paintings that will give you a break from the regular puzzles. I absolutely loved the interactive paintings. After winding them up and figuring out the controls, the painting is in a marionette style that lets you control someone or something. These range from jumping over obstacles to dancing.

I didn’t notice this until later, but it does seem these paintings go with the game’s lore rather than just being something pleasant that you can look at. Creaks lets you see your painting collection at any time, which is mostly helpful in seeing how many paintings you might have missed, but also a way to view them all without replaying the section they appeared in and see what order they are really in. I noticed that many paintings are part of a series, clarified by clearly featuring the same avian and/or person. This is certainly interesting. 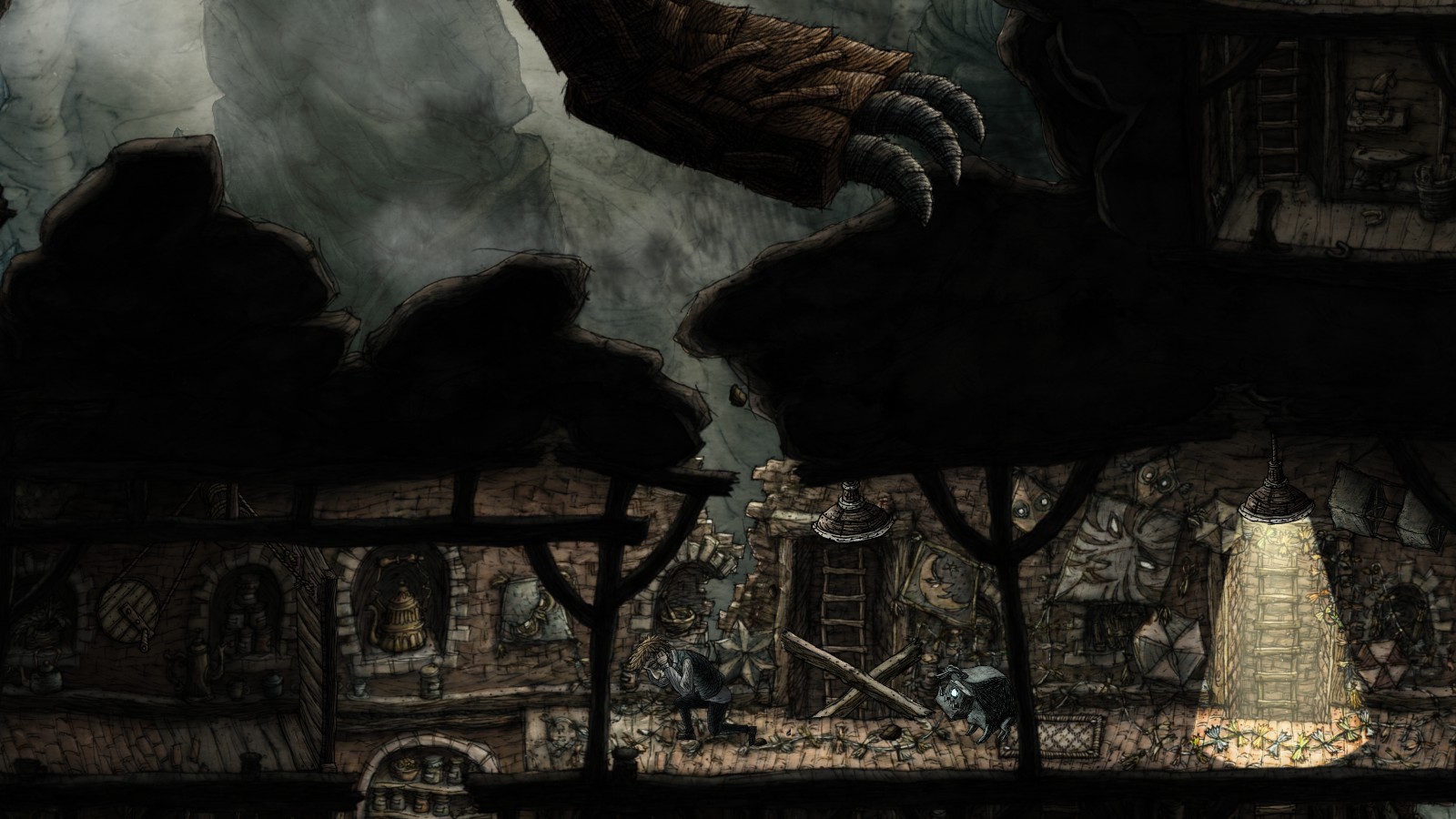 If you’re a fan of puzzle games, especially ones that require you to use your environment, you definitely should play Creaks. It does a great job showing you how how each mechanic works, the difficulty is just right, has interesting paintings as its collectables, features unique and beautiful areas, and a haunting soundtrack. While the story relies on you wanting to explore, it reels you in with a mystery on what exactly is happening here. I also appreciate that the achievements are easily achievable due to mostly being tied to paintings. The only negative I can really think of is that it takes a bit to get used to having to look down or to the side before jumping and as I played using a controller, I often had times where I passed by furniture instead of grabbing it and often made me grab onto a ladder if I tried to move while by one.