Event-D is a story-driven visual novel. It doesn’t have any gameplay so to speak, and its main feature really is its story which takes us to outer space in order to solve a mystery. So, right off the bat, if you are looking for an RPG or a game to make some story-related decisions, this is not it. But if you are interested in good stories, especially those involving space travel, then stay in your seats. 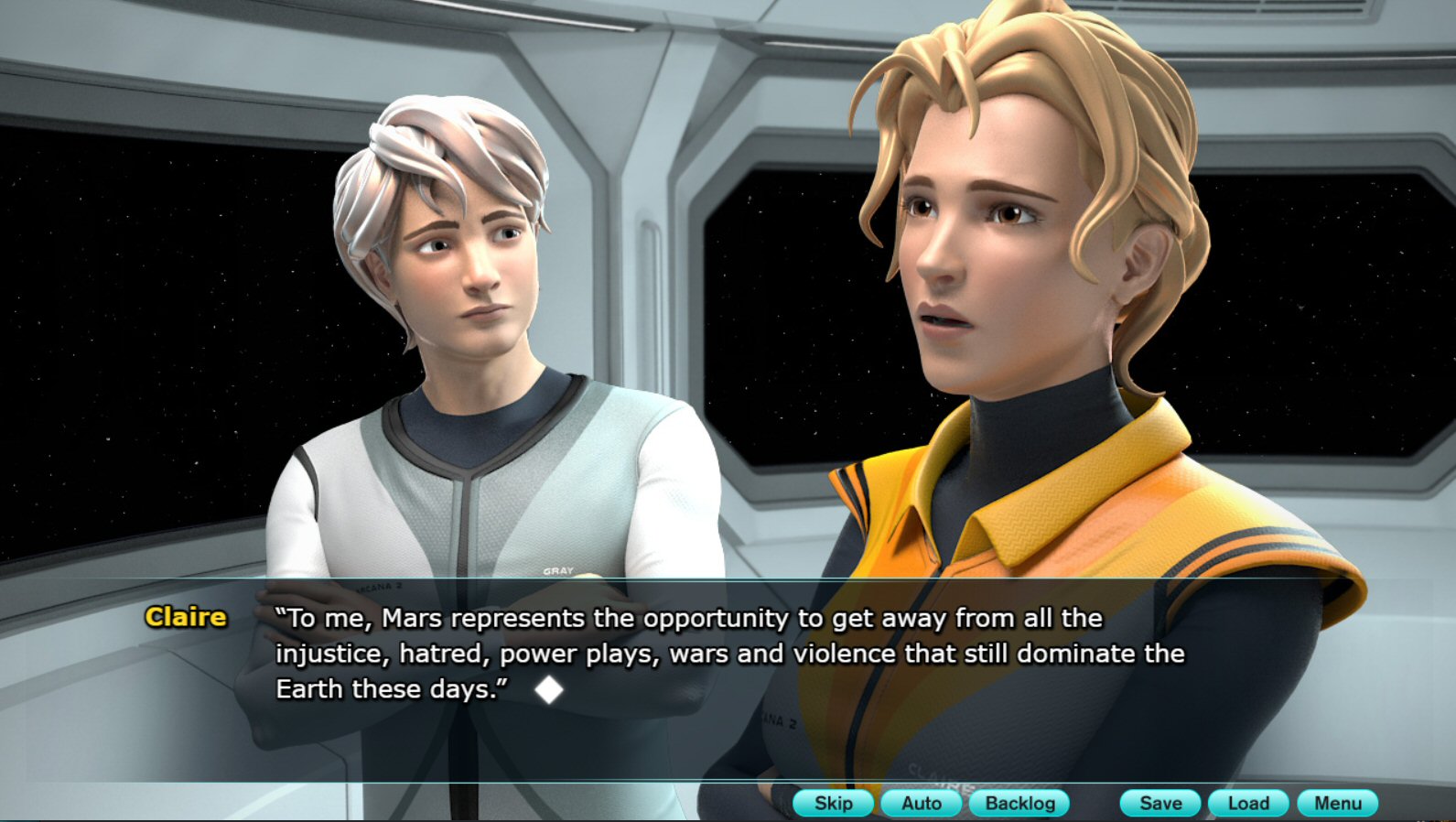 So, as already mentioned, this story is about space travel. The story begins by telling us about humans planning to colonize Mars by sending specialists and robot labourers in 3 separate spaceships, each one 2 years apart, called the Arcana-1, Arcana-2, and Arcana-3. However, Arcana-1 project had failed due to a mysterious incident termed Event-D, where partway through the journey, the entire crew of the ship aside from the robot had vanished, and shortly after the contact with the ship itself was lost too.

Three years after, the space agency has managed to narrow down a possible location of Arcana-1 and began preparing a rescue mission – to send a new crew to find Arcana-1, to find out what happened to it, and to bring it back. And this is what the story revolves around as a crew of intelligent specialists is sent to find the missing Arcana-1.

At the start the story mainly introduces us to the major characters and so might feel a little slow-going. This eventually picks up as the crew begins its journey, and while it’s travelling to the location of missing Arcana-1, the crew begin preparing themselves for how they’d locate it and how they’d board it, as well as discussing possible theories of what might’ve happened to Arcana-1 and what dangers they might have to watch out for. 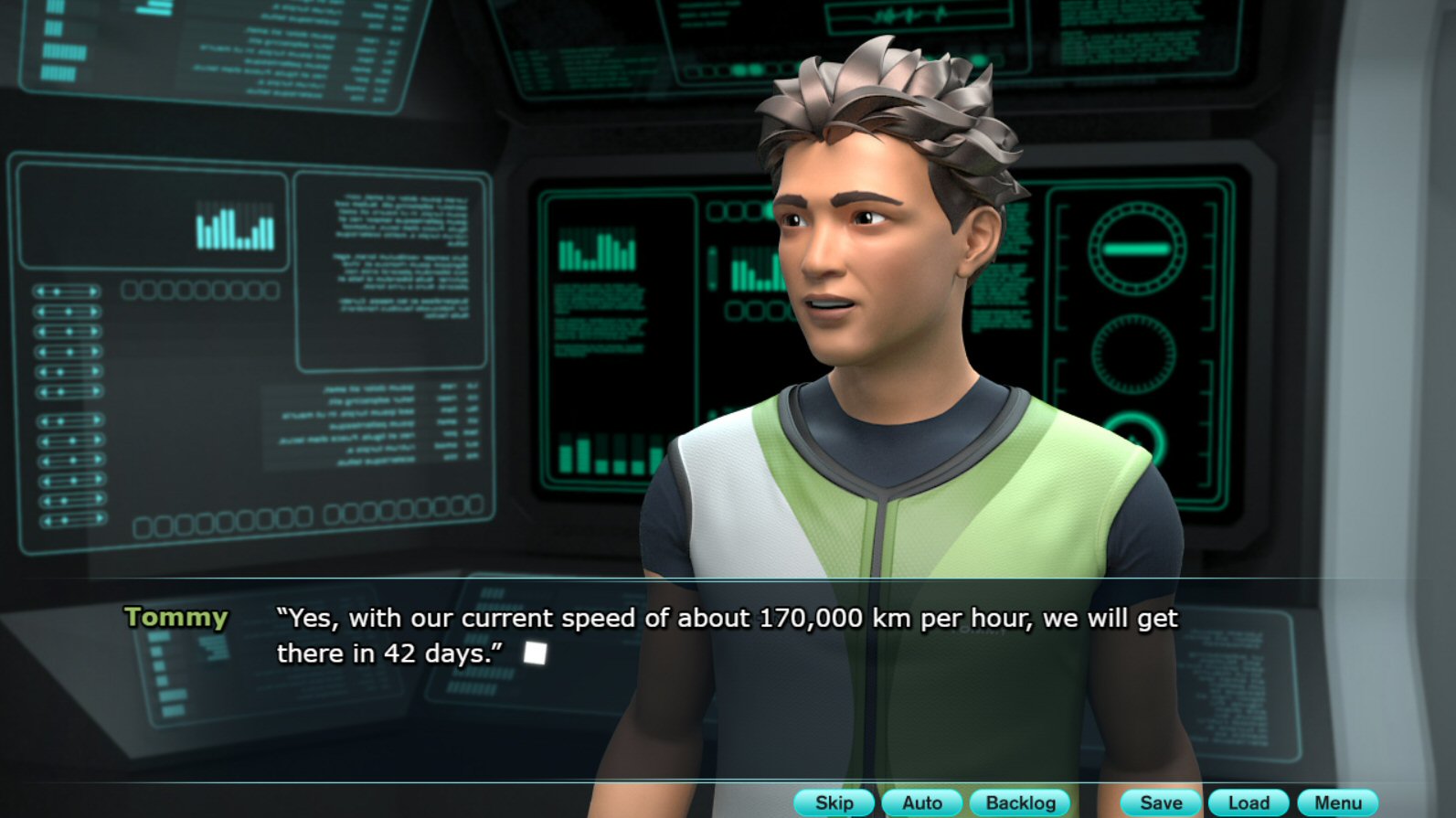 The pacing of the story escalates very nicely and keeps building to nice climax moments and interesting twists and surprises, all of which feel coherent and believable. At the same time, it gives most characters sufficient screen time so that we can get to know them better. The point of view changes regularly throughout the scenes, so we get to witness what each character is doing, as well as get a chance to delve into their inner thoughts. The characters are given realistic motivations, likes, dislikes, and fears. This includes also the robot characters.

Speaking of robots, the topic of artificial intelligence does come up a lot in the story and is a big part of the world-building.

A lot of the time, the story is narrated by an omniscient narrator, and even the dialogue between characters is delivered in a way of direct speech, as though someone is retelling it to us. Normally, I am not a fan of this type of story-telling in games, as I like games to do more showing and less telling. However, here, the narration is not overdone and does not interfere with visual representation. It does not stray into unneeded details and instead tells us just enough without missing key details that we need to know. 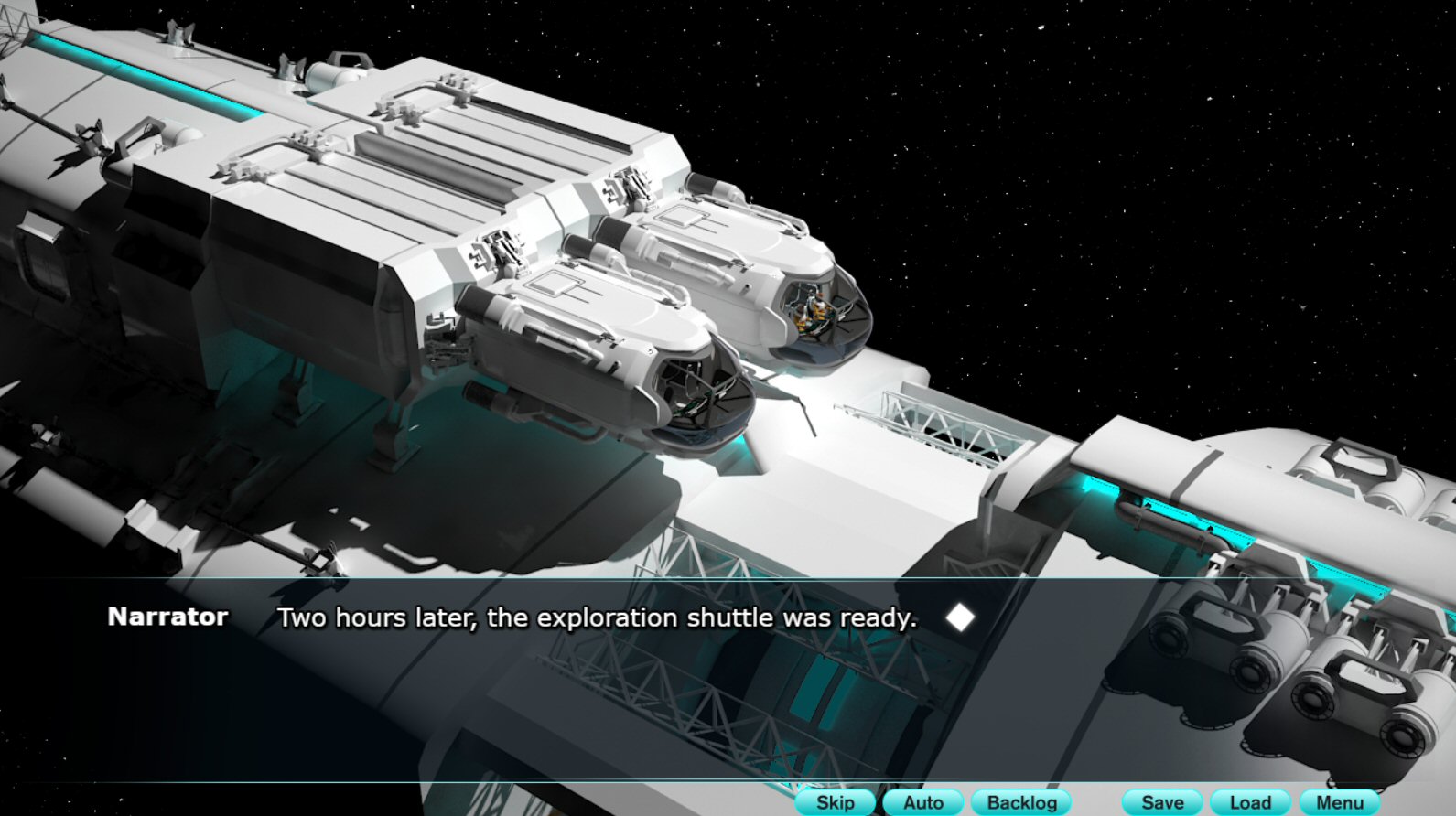 This visual novel is presented in a form of still images that keep changing as the scene progresses. The still images show us a snapshot of the scene, and they keep changing regularly as the events in the scene develop. This is assisted by narration or dialogue, which is delivered a few lines at a time at the player input. The still images are kind of shown in a way that you’d see in a comic book or a graphic novel, where they show everything we need to know so to get immersed into the scene, including facial expressions of characters. 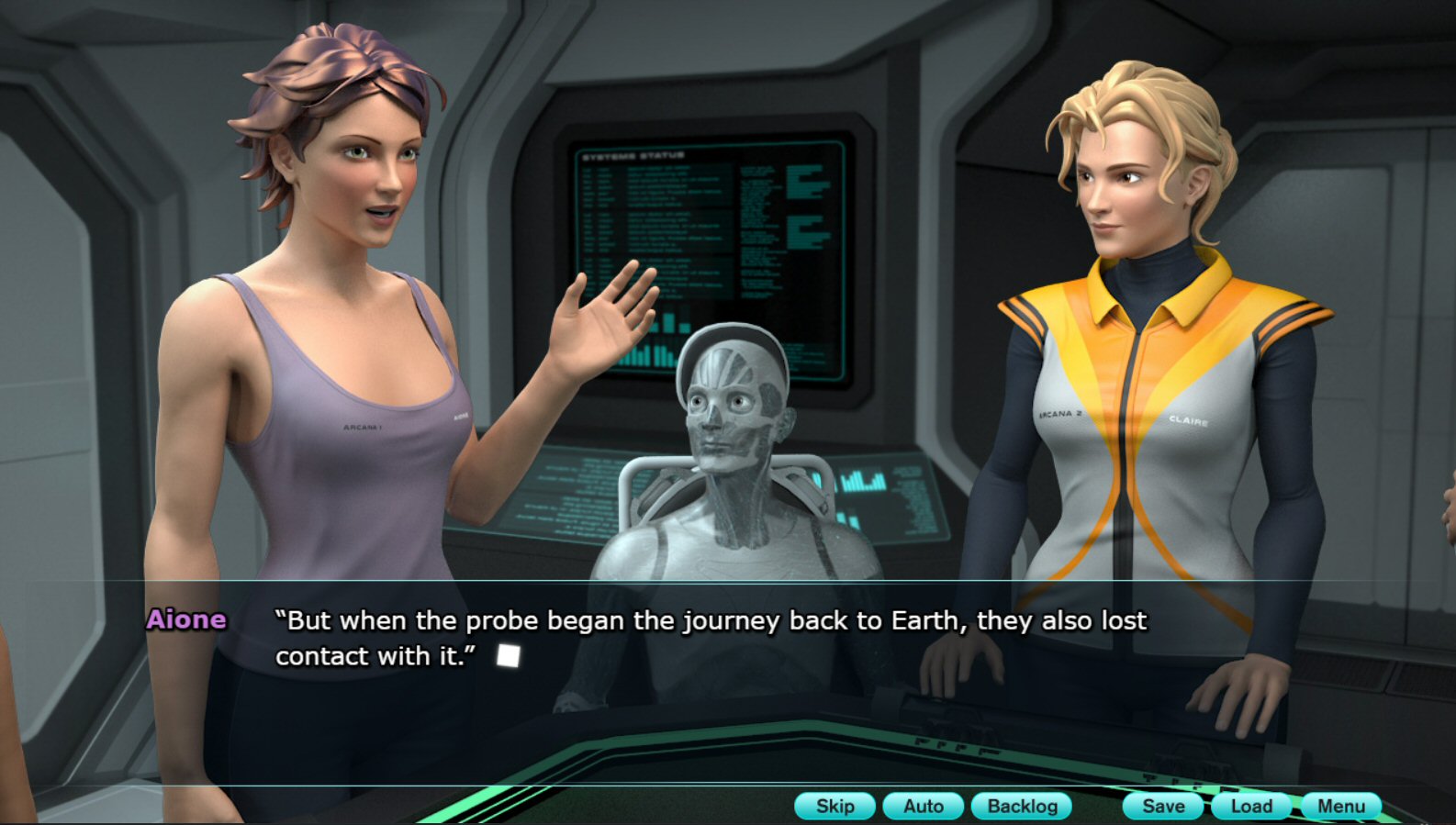 The overall visual style is pretty nice. The characters look like 3D models, but there is a good attention to detail. All the movements and facial expressions are shown clearly.

The music assists each scene well. Some tracks could feel a bit repetitive, but generally as we focus on the plot events, the repetitiveness is not noticed quite so much anymore. The intense moments have appropriate fast-paced heart-pumping tracks playing and the eerie parts have creepy-sounding music playing which greatly enhances the atmosphere.

There’s no voice acting, but it’s not necessary for a visual novel such as this. Some sound effects are present, however, despite the events happening as still images. They can seem subtle, but they make a big difference in how the scenes are presented. 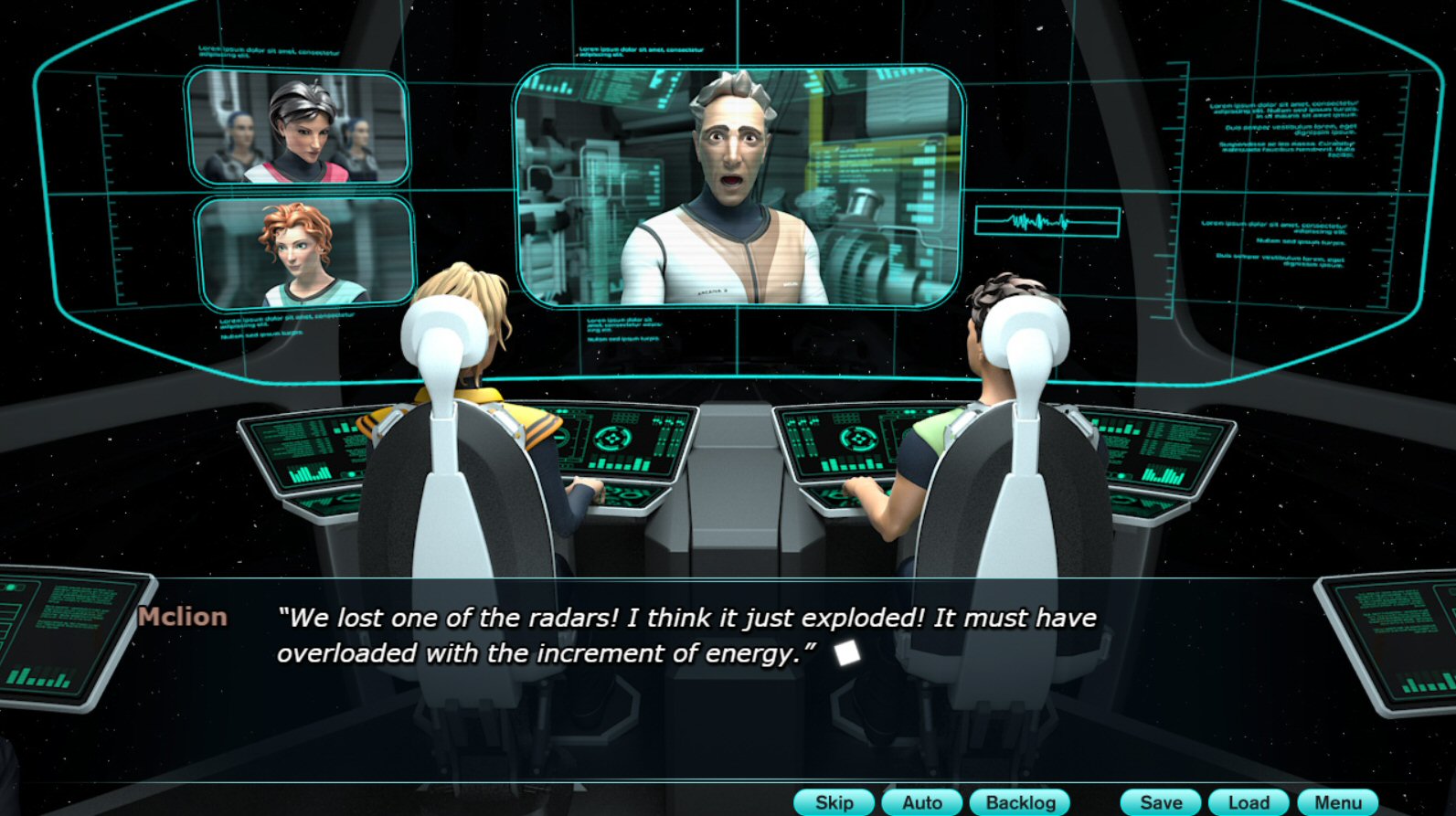 I enjoyed going through Event-D. It might lack gameplay, but its story is really well-written. The plot, characters, and world-building are all excellent. If you’re a sci-fi nerd and enjoy stories about space travel and robots, then this will be right up your alley.

I do think that some gameplay elements would’ve made Event-D even better. Being given some story-related choices to make would’ve been a welcome addition and given players some interaction with the game other than simply scrolling through dialogue. There could’ve been potential for some different outcomes as well as being able to change fate of some characters. Hopefully if these developers make another similar game, they would add something like this. They’ve shown that they can write a really gripping story full of interesting characters and to deliver it with a nice presentation. So, adding story choices would take it further, I believe.