The greatest crustacean fighter ever made?

Note: No real crustaceans have been harmed in any way in this review.
Note 2: I already did a preview on the Early Access. As this review is an expansion, I recommend giving it a look as well.

Ever thought about playing a crustacean fighter where you can use Lightsabers? Drills? A Chainsaw? How about them driving a Scooter… or a Seal? Yeah, it’s over the top in its way but is it fun?

Those who’ve already gotten the Early Access version, fret not as the save file is backwards compatible! Rejoice as you continue your journey where you left off.
But what’s new since the preview?

Improved Balance and Difficulties
There were times where the difficulty was borderline insane when you get close to the end. With the Campaign experiencing a change of balance, the latter stages have become much more feasible. If you were despairing before, there’s a good chance that it has mellowed out a bit.
Then there are multiple difficulties for you to challenge, in case you want to experience the fights a little bit different.

Versus Content
All Crustaceans and Weapons automatically available
Offline Vs. 1-on-1, 2-on-2, up to 4 player split-screen.
Online Vs: Battle: Free or Ranked (1-on-1 only), Spectate. Cross-Platform!

Flip ’em Over!
This is where it takes a little bit from the party fighters like Nintendo’s Smash Bros. Rather than it being about depleting your opponent’s life, your goal is to flip them over until the 3 count is over.
To do that, you have to damage them. The more damage they take the easier it is to flip them over and also harder for them to recover.

The Campaign, Survival with rankings
It got expanded with a bonus mission that also introduces new stages, weapons, and so on. Then there are also Survival missions that let you fight a gauntlet of enemy waves until you meet your end. Competitive players can strive for the top in the online rankings. 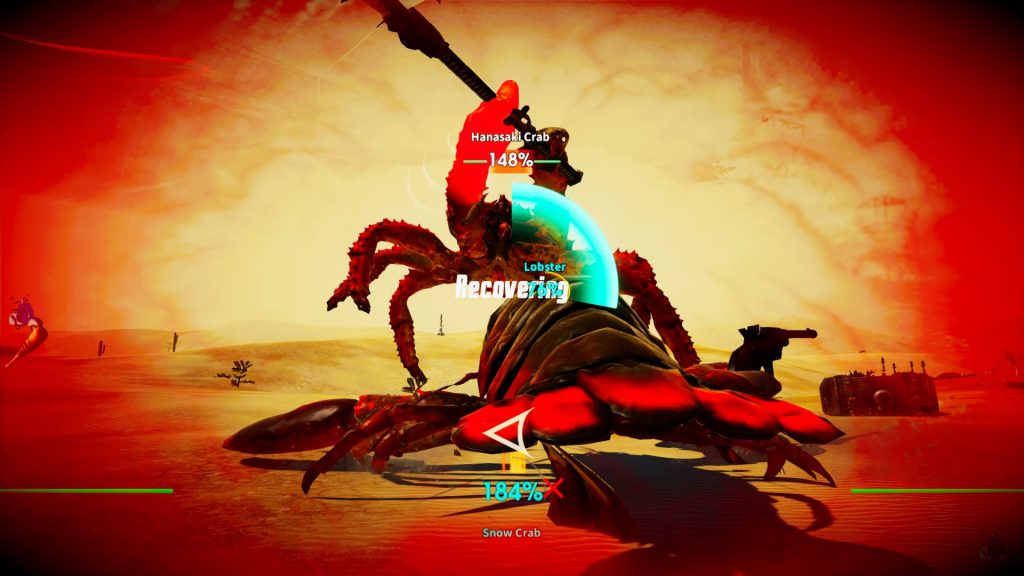 Are you in a team? Are you or your partner flipped over? Lend a helping hand and get them back on their feet! You only have to stand over their corpse and hold the A button. It might take a few seconds but it’s worth it.
I don’t remember this mechanic being in Early Access so that could be a huge change.

The Weapons
They are largely the same in terms of control. Though there are quite a few new interesting additions to your potential armory. Axe Guns, Scooters, Seals, a Magical Trident, Pile Bunkers, the number of weapons is staggering and expands the fun to be had.
Some of them can even transform!

Hyper Mode
Opens when you’re further along with the campaign. The Hyper Mode renders you unflippable and buffs you up. When it finally runs out you’ll activate an explosion that damages your opponent. Some weapons have their Hyper moves like the Excalibur or the Drills Assault Mode and then there’s the universal.
Note: Hyper Mode is a reference to the Mecha Anime Mobile Suit Fighter G Gundam as there’s also a Hyper Mode that turns them gold-like.

Kani(Crab)hameha
It’s a wordplay to the Kame(Turtle)hameha. By moving both your pincers to the right side and punching after charging you will blast out a blue beam that dishes out some real hurt. As you can surmise, it is the same movement as the renowned signature move of Dragon Ball finalizing the homage.

That’s how it was before but now you get a whole slew of new Hyper Mode moves to unleash: 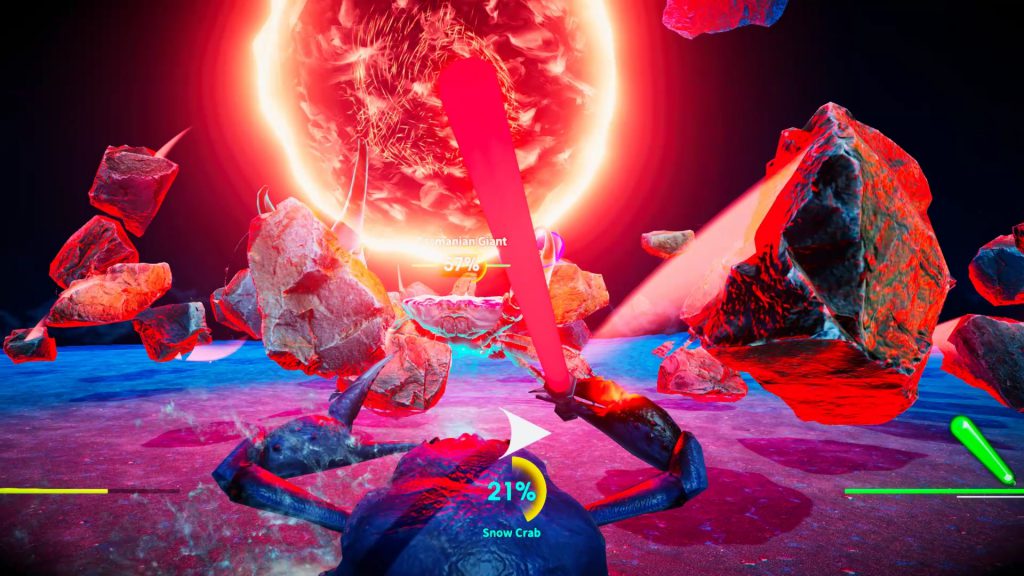 Stand still and raise your claws upwards to charge up an energy ball that you can hurl at your enemies.
This is a reference to Dragon Ball’s Spirit Bomb (Genkidama) 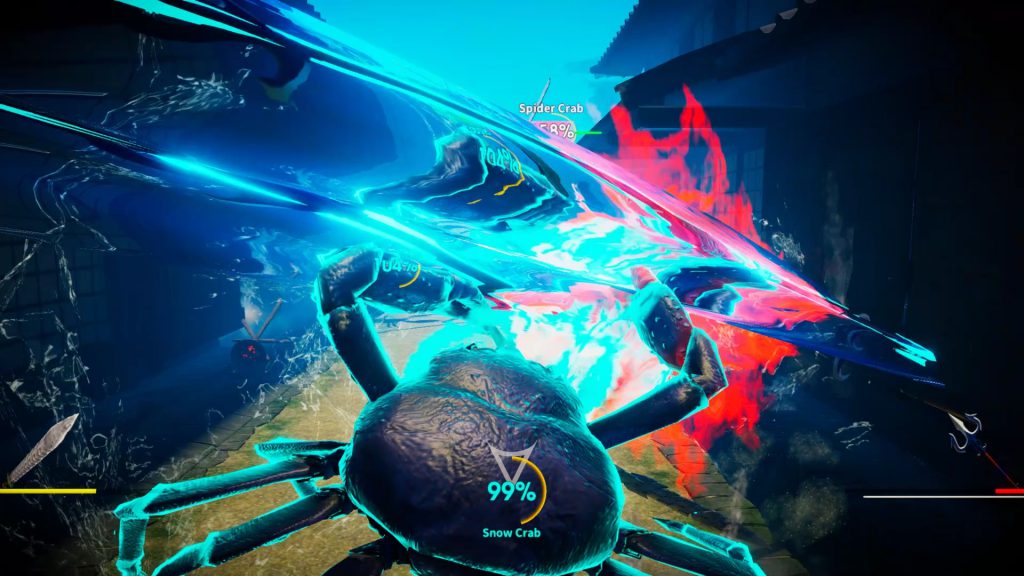 Stretch your claws downwards and power up! Your Crustacean will turn red with buffs.
Another reference to Dragon Ball’s Kaioken used by Goku.

Enchant
Buff your weapons and gives them additional knockback power. 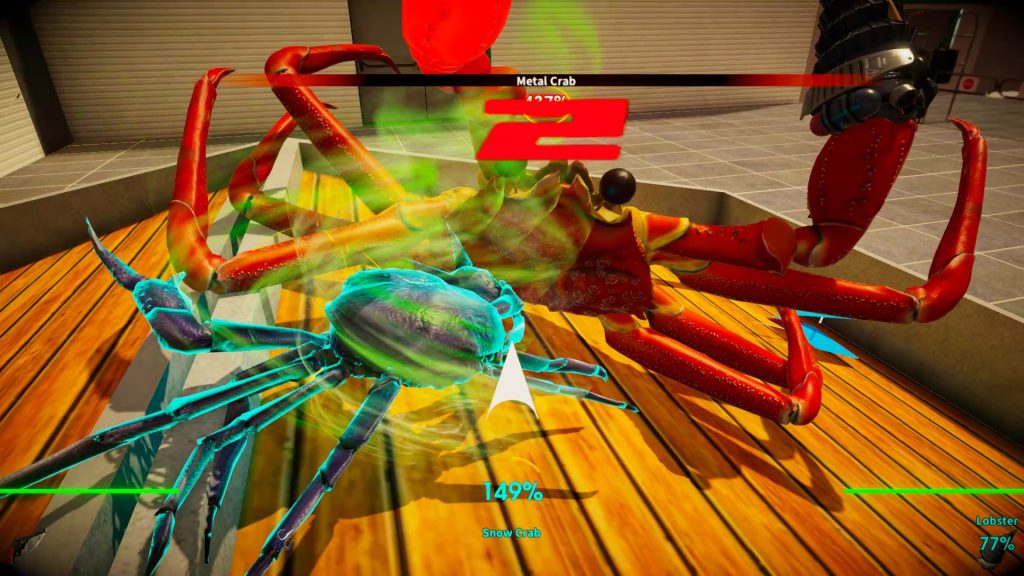 Your Crustacean will become a living tornado that knocks everything away that comes close to it. Need to send your opponent off the ring? This is going to be a very good bet!

Updated Gameplay Impression
The final release of Fight Crab can be summed up in one word: More! New weapons and maps are giving you more variety in ridiculousness.
The Hyper Mode might be the biggest change of all as the new moves are giving you more strategic options for its use. Being able to save or being saved by partner changes the difficulty tremendously as your chance to survive multiple waves is increased by a lot and therefore much fairer than before.
Otherwise, there are no notable changes in basic gameplay compared to the Early Access version. Most of it is on the subtle side. 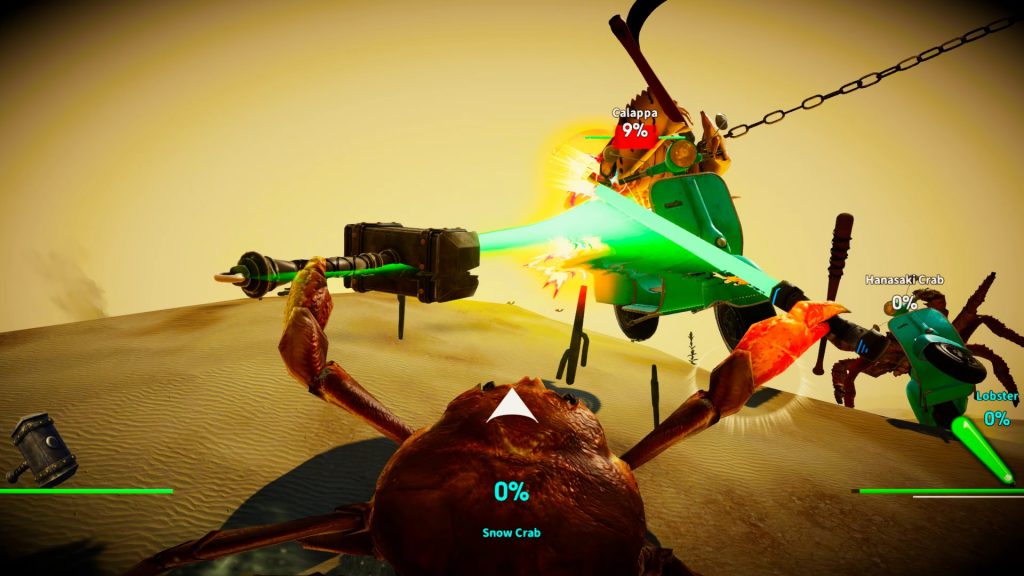 The graphics do their job and if you take into account how messy things can get with all the items strewn across the fighting grounds it does give the game a certain flavor. Exploding cars, weak weaponized Salmons that can get sliced in half, palms, plates, oversized chairs, and much more bring a ton of character into the action.
The new weapons are a fine insane addition to the already wacky arsenal and add another layer of visual insanity of crustacean combat. The same thing applies to new maps.
Then there are the additional flourishes of appearing enemies. Many of them just drop from the air with an explosion, in the medieval map they drop with the chandelier and in the Chinese restaurant the boss blows past your expectations by appearing RIDING A DRAGON that makes it rounds outside of the ring, while you’re fighting.
It sounds absurd, it looks absurd, it’s great. It doesn’t look graphically special but it does a lot to fight its way into your heart.

If you watched the trailer you know it’s serious business and gets your blood pumping. It tries to give its spin on the different themes of the maps and helps you get into the match.

Information regarding Switch port
Some of you might be thinking about having it on the go instead but there are some trade-offs (Source).

Fight Crab is pure unadulterated fun based on rather particular physics whether it’s a shortcoming or not that depends on the player’s view. You get a lot of crustaceans, weapons to choose from with various themed maps.
As before, the gameplay keeps it slow clunky gameplay that is comparable to watching giants fighting each other which is why the movements are on the slower side. There are no real notable changes in comparison to the Early Access version so everything said before still applies. Love it or hate it, you can still have a lot of fun with it.

Everything got expanded from the Early Access release but even then it barely misses the Autosave because of its very particular gameplay. Interested? Then give it a shot for sure, especially when you have a friend to team up with!