The art is good and the hilarious and offensive script is great, but as a VN it has a number of deficiencies.

Bare Boob Brawlerz Visual Novel: Vol 01 (henceforth “BBBVN”)is the latest “boobie” game from multi-genre adult game developers, X-MiGuPLAY, LLC. This is the first VN from X-MiguPLAY, and apparently comes in the form of a prequel to Bare Boob Brawlerz: Power Claw, the beat-em-up / fighting game that merged the styles of the two Stripper Anya games.

I enjoyed the tongue-in-cheek, over-the-top scripts of the developer’s other games immensely, so I’ve been looking forward to playing BBBVN ever since it was announced (in 2019, I think). So how does it fare? 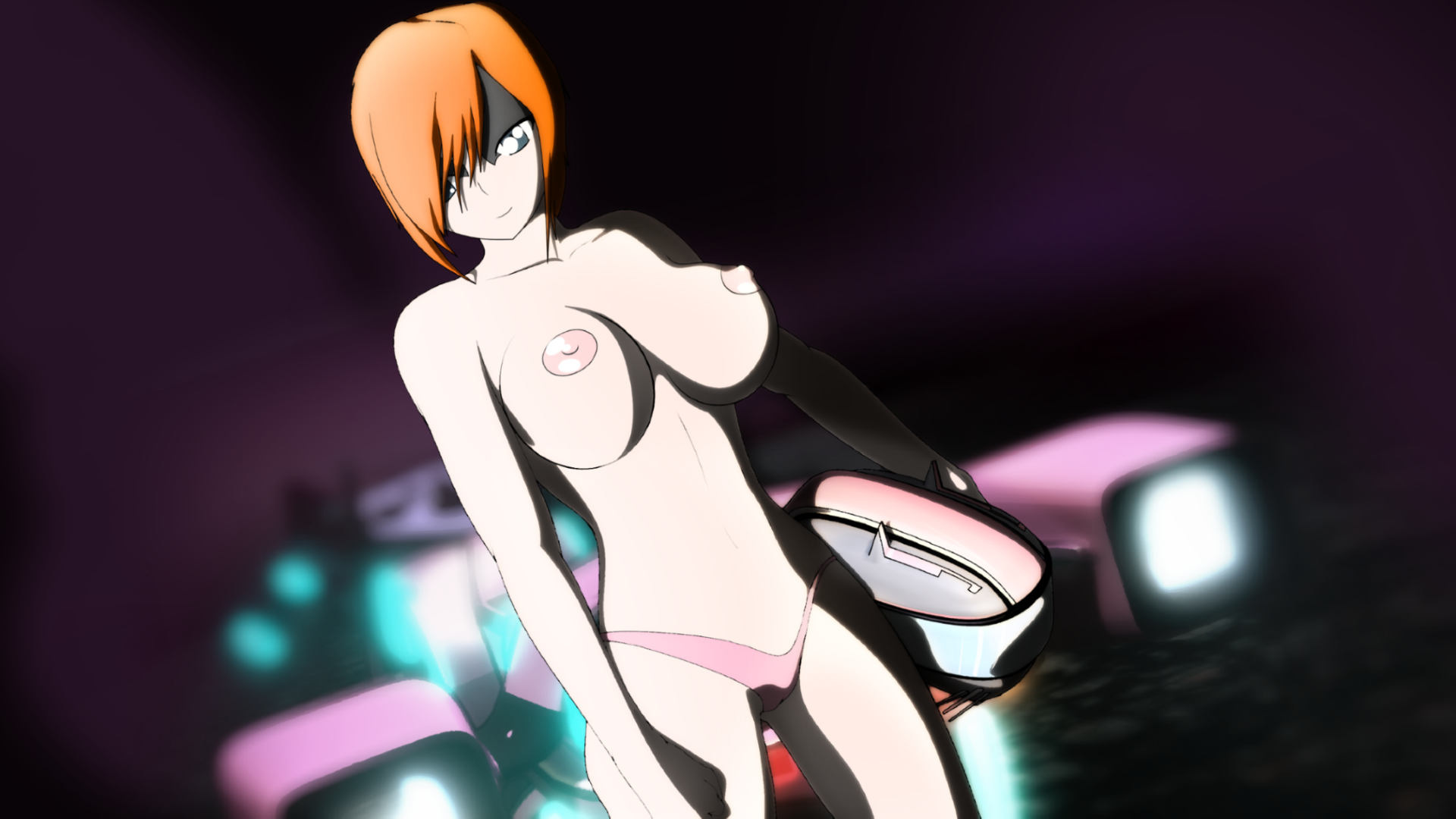 The core gameplay is that of a “kinetic” novel: a visual novel with no choices / decision points. You read through the story, chapter by chapter, and then the game is finished. There are a couple of extra gameplay modes, but the focus is the VN.

As with the developer’s other games, this is made in Game Maker. It sports an extremely basic VN interface: text written over the top of mostly static PNG backgrounds (with a couple of animated boobie-bounce images thrown in for good measure). The game is divided into 18 chapters. You select the chapter you want to play/read and do it, then return to the menu to select another. There’s no auto, skip, portraits, interface hiding, saves, gallery, or even semi-transparent text box for the story. It works well enough, I suppose, and does the job, but it’s the most basic VN interface I’ve seen.

The story itself is quite short, taking me a little under two hours to read through, while taking a few minutes here and there to alt-tab and take notes. If you wait for the voice actors to completely read every line then it’ll probably take you a little longer, but you may not want to do this (see next section). The story is apparently short novella length: just over 20K words. 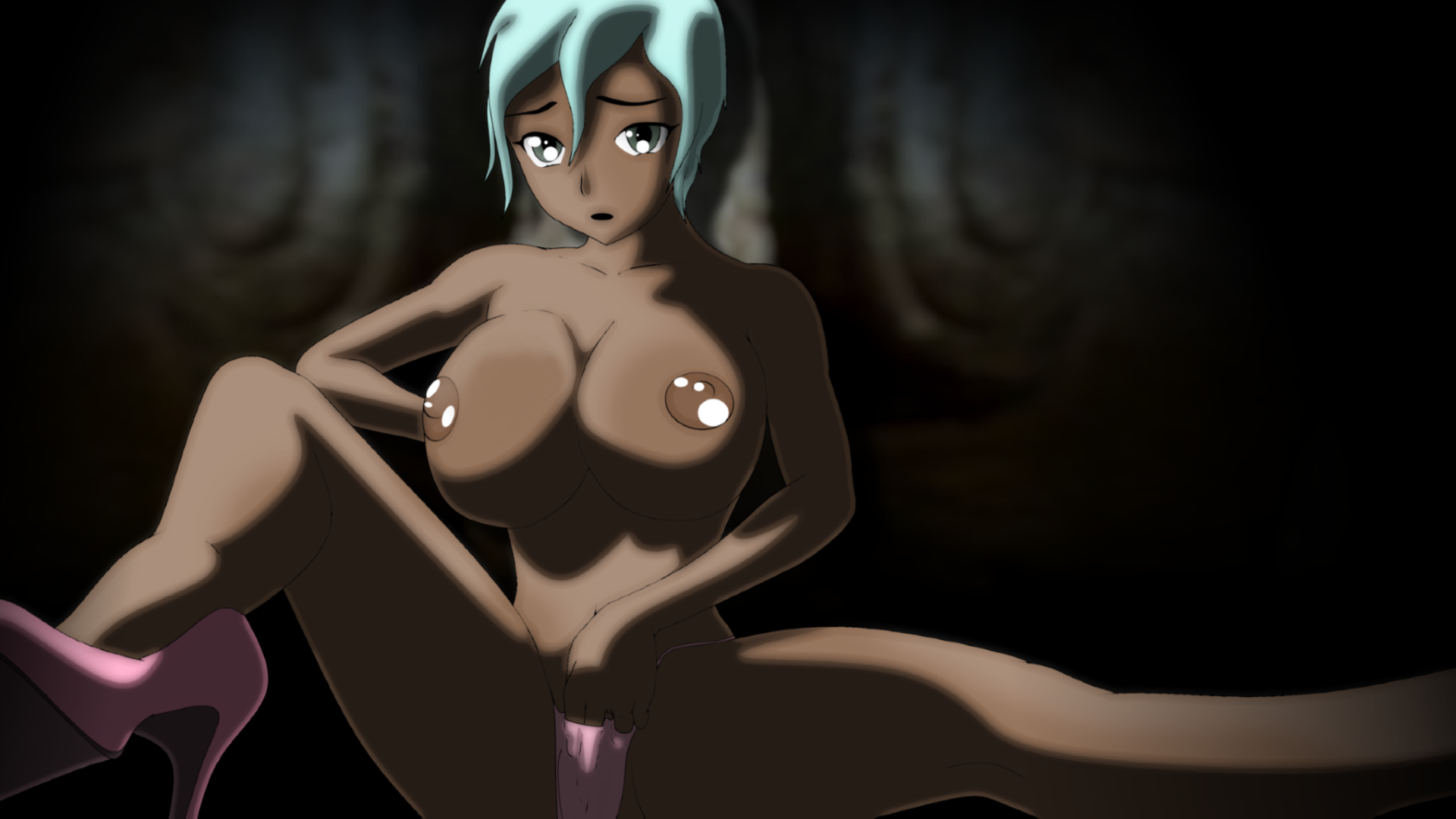 The world is post-apocalyptic, and I don’t know if it’s just me, but a lot of it seems to not make a lot of sense. Many of the longer diatribes I found hard to follow, but the basic focus of the story is Vestal, a young adult woman from the oppressive island of Jali — where the ruling class tell their subordinates that the rest of the world is uninhabitable, and women are breeders — meets with a group of revolutionaries intent on bringing the government to its knees and making the world a better place for large-breasted women everywhere. Often I found I didn’t really know what they were talking about, but it was still mostly good fun.

The story is written in the same style as the previous games, so you can expect the same over-the-top dialogue and biting commentary. If you expect references to titty farms, Urban Dictionary – style terms for sex acts, and lines like “She told me I lived on a bitch farm and my job was to get artificially-inseminated and pop out bastard children.” (sic) then you won’t be surprised. At times it’s hilarious, in spite of the grammatical errors, and at others it’s just completely over the top. 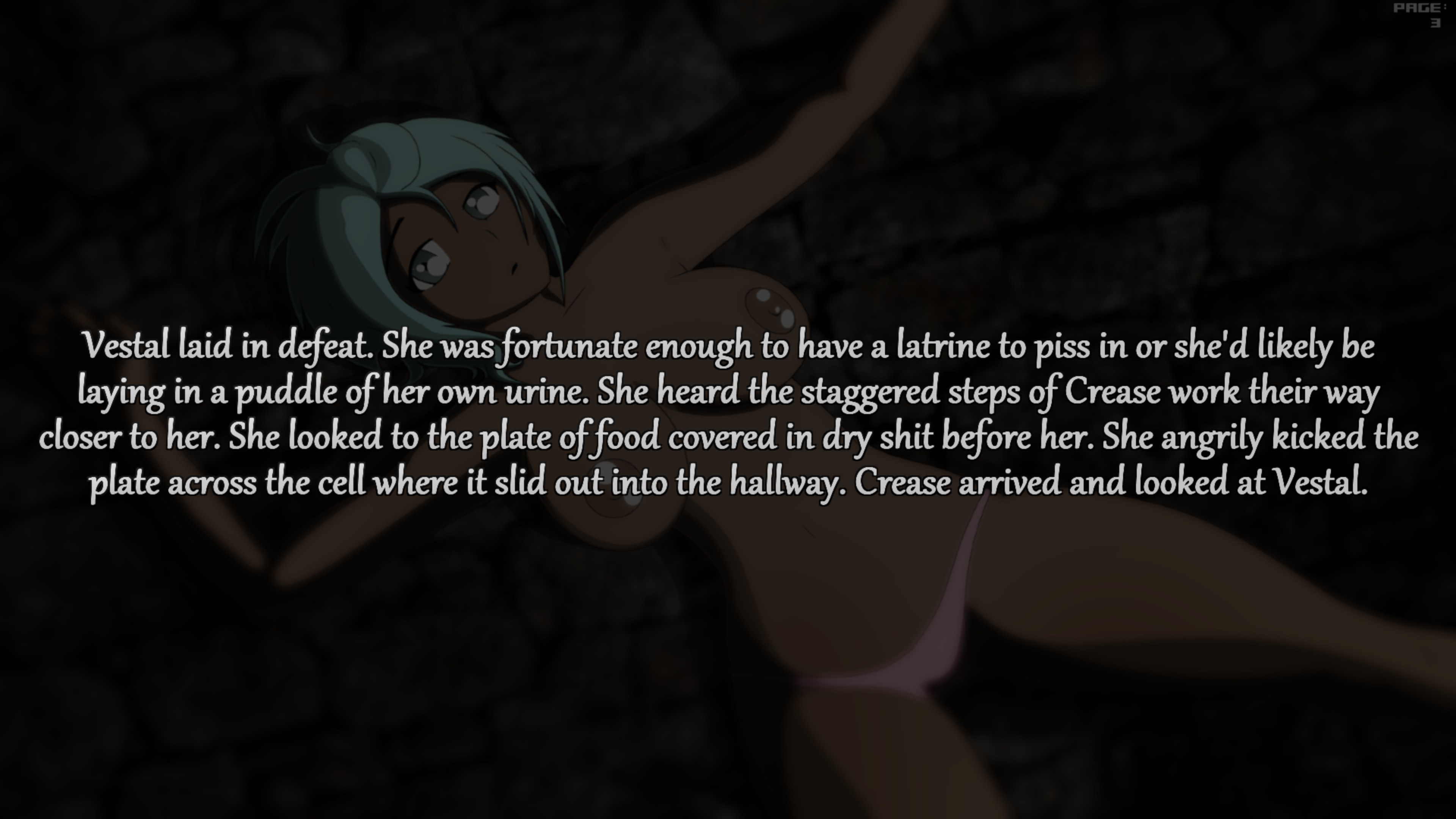 Some sections (e.g. Chapter 10) could do with editing, as the detail really slows down the action, while others (e.g. Crease) I found uncomfortable and disgusting, and coming from me that says a lot! Props to the developers for crossing a line that, honestly, I wasn’t even sure existed anymore! The text is also littered with a few too many metaphors that seem as if they’re reaching a bit too hard. Oh, and the pissevator was just … freaking weird! 8-D

The worst part of the story, though, was that it doesn’t have an ending. It basically just cuts off three simultaneous story arcs and leaves all of them hanging with no resolution. It’s not so much a “cliffhanger” as it is like watching a single episode of Danger Mouse in isolation; even though it’s “Vol 1”, I feel there should be some resolution.

I am glad that the Power Claws from the previous game were explained in a bit more detail, though, and especially that Vestal was involved. You see, they’re powered by Mercury breast implants that power the claws when the breasts move (i.e jiggle). It took Vestal’s disbelieving questioning, though, to finally get the admission, “Maybe the inventor just liked titties.” 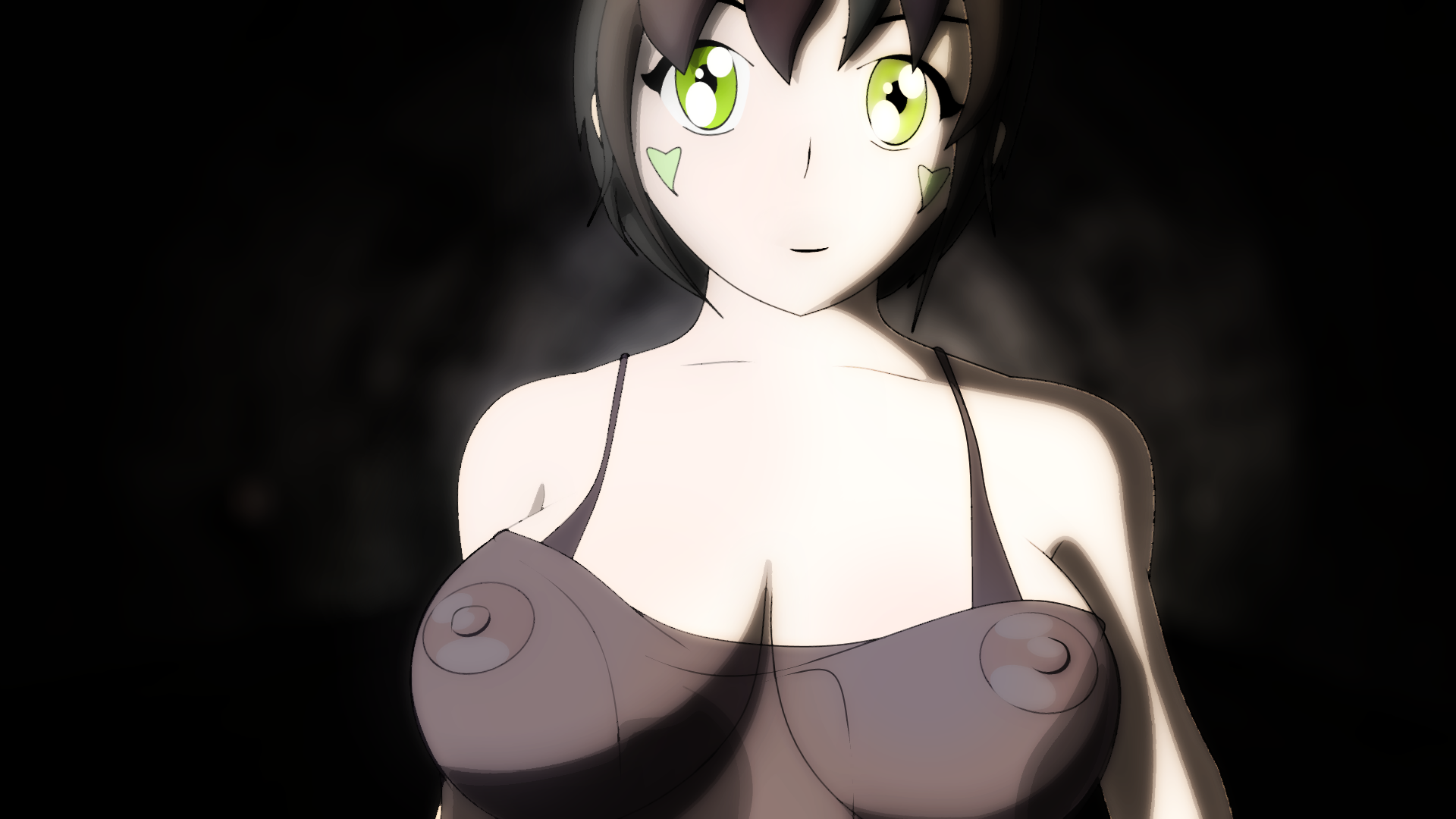 As mentioned, the interface is extremely rudimentary, but it basically does the required job.

Art is 1080p (full HD) and in a consistent style. I really quite liked the character style, though many of the characters are not exactly what I’d call attractive. Ultimately it seems like a sort of western anime style with a LOT of nipples. Seriously, almost every picture featured them, either bare or extremely perky under clothing. As with the developer’s other games, though, breasts are BIG. I mean really, really, big. Huge. Gigantic!

Backgrounds tend towards the abstract, but work rather well for the setting. 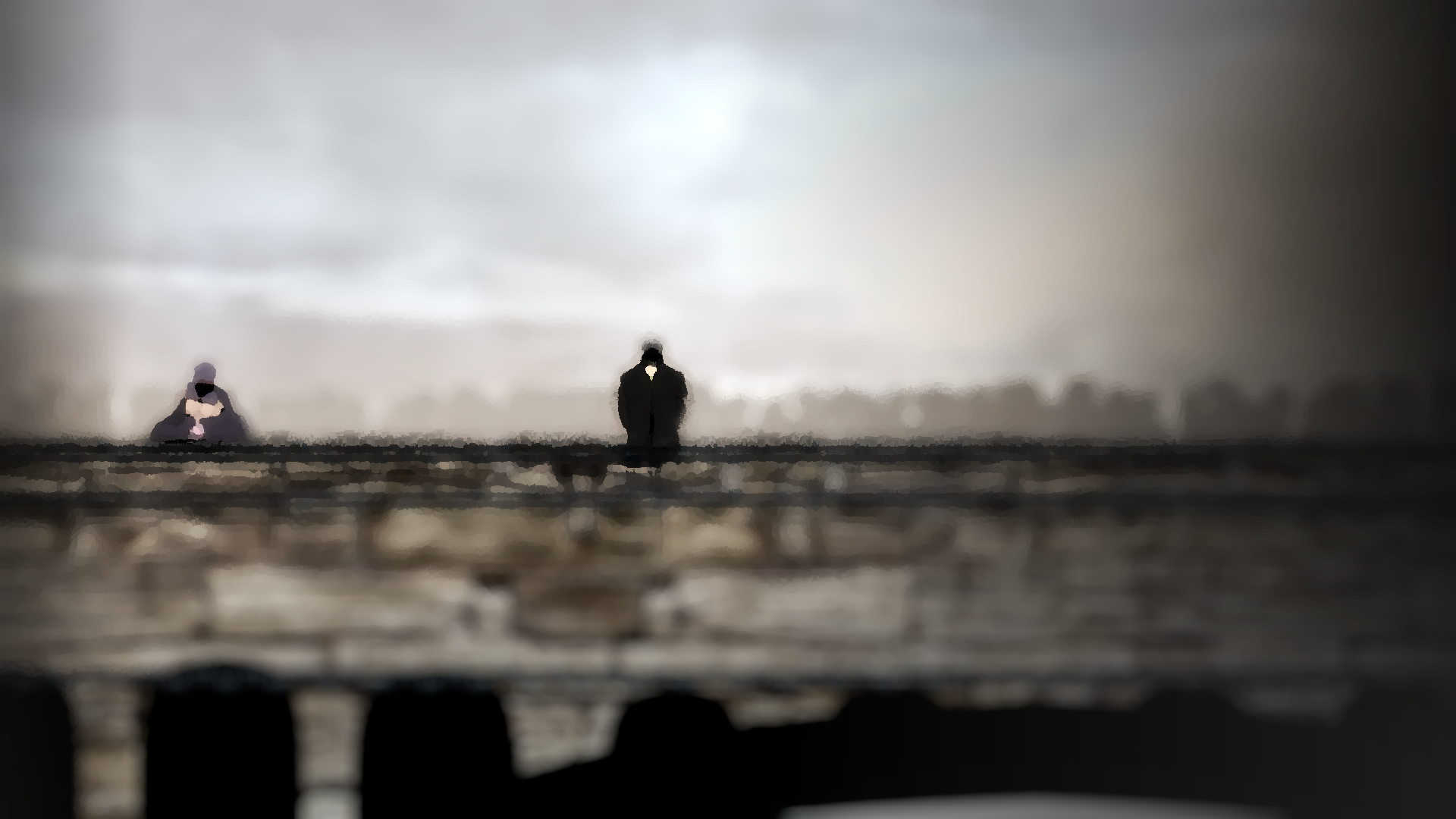 Music plays continually throughout the game and ranges from hard rock tracks to more electronic, but it’s often fairly thrashy and high tempo. Again, it fits the setting well, and I have no complaints, but I wouldn’t personally rush out to buy the soundtrack. I don’t recall noticing any sound effects.

The game is fully voiced, but after reading through the entire script I think I’d have preferred it if it weren’t. The narrator’s timing often seems a little off and some of the cast (all but two, I think, being female) are gratingly bad. The recording quality is good, and the script is basically what I’d expect from an X-MiguPLAY game, but the voice acting itself is really not good: Yuki, V, and Havoc, in particular, are awful, as is Crease (though that seems to be intentional on his part, so maybe that means the voice actor was actually really good?). From the credits, I suspect the whole script was read by only two people, but ultimately the game would have been a better experience without the voice acting, I think.

As well as the VN, the game features two bonus modes: lap dances and some recoloured Power Claw levels. 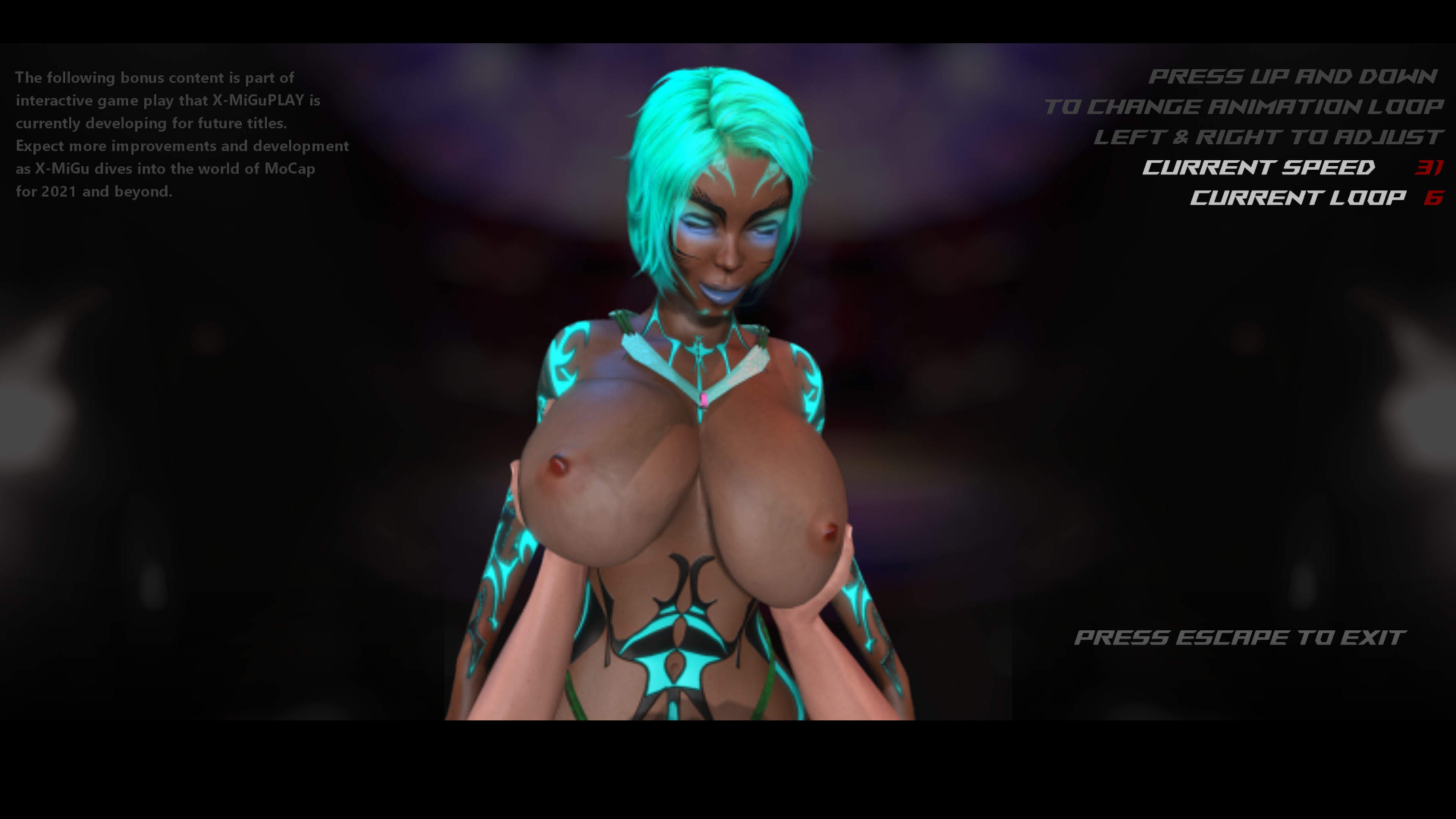 I’m not overly interested in the Power Claw re-edits, though for anyone who hasn’t played that game they might be a nice sort of demo. The lap dances initially didn’t work on my PC, but the developer fixed that quick smart, and within a day I had all of the female cast jiggling, gyrating, sucking, and otherwise in front of me.

The lap dances are a fun distraction for a few minutes, but, as I mentioned earlier, I don’t really find any of the characters attractive, so these sequences weren’t particularly arousing. Breast physics in these sections are out of this world, with the ginormous mammaries of your chosen dancer looking like they’re made out of some sort of Helium jelly! They gave me a good laugh, at least.

The game’s make up also makes it easy to look at images or listen to the script: there’s no encoding on the data files, so all you have to do to see the raw .ogg sound files and .png image files is navigate to the game’s install directory. 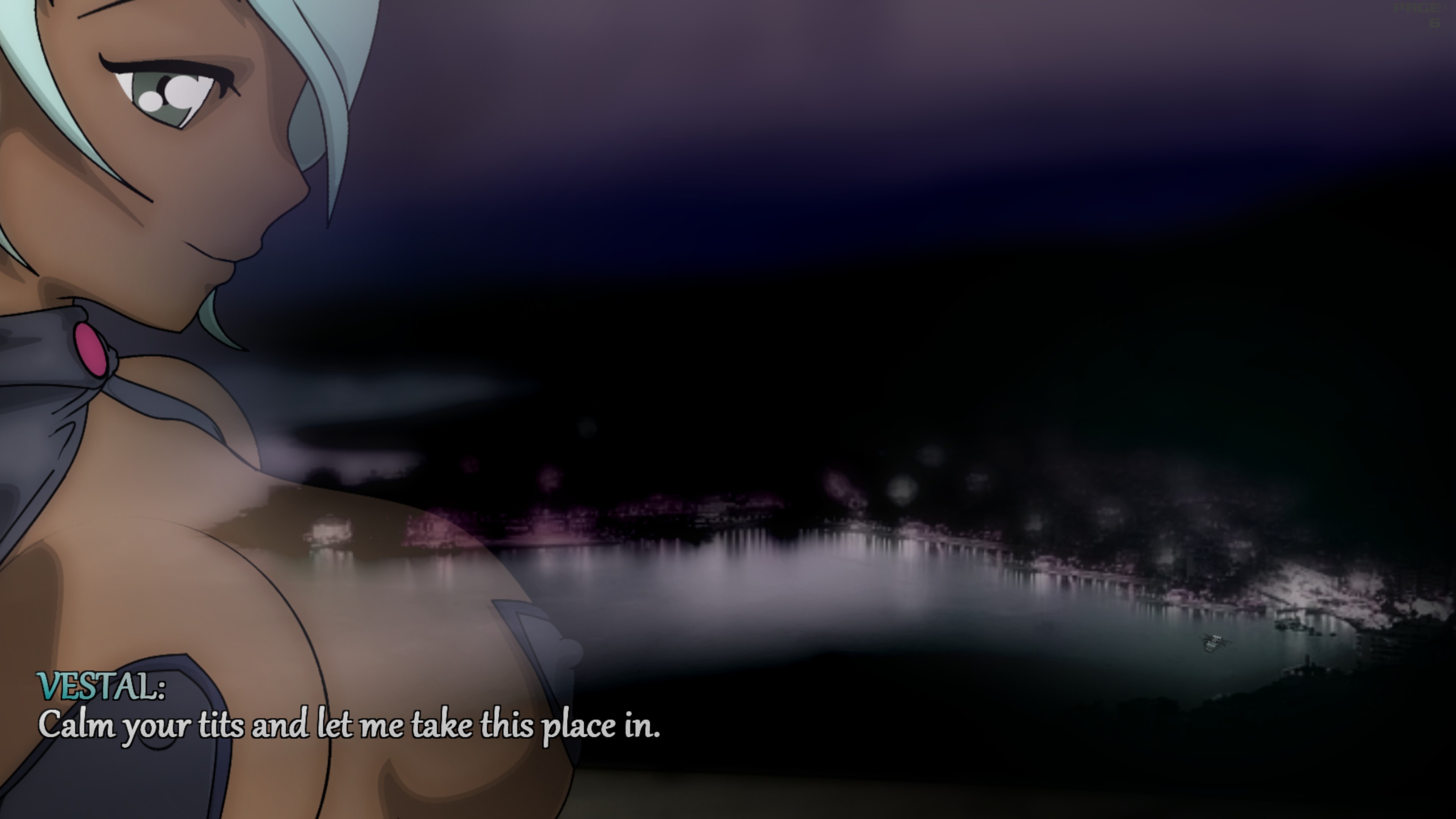 Bare Boob Brawlerz Visual Novel: Vol 1 was a little less than I expected it to be. Art is good and consistent with the developer’s usual style, and the script had me both laughing out loud and feeling physically ill, which is a good achievement! But the interface is lacking for a modern VN; the voice acting is mostly pretty terrible; and the story itself is rather short, doesn’t end well (at all?), and could do with another editing pass or two.

I suppose I’m a little disappointed, overall, but it’s still worth a look when it’s on sale.